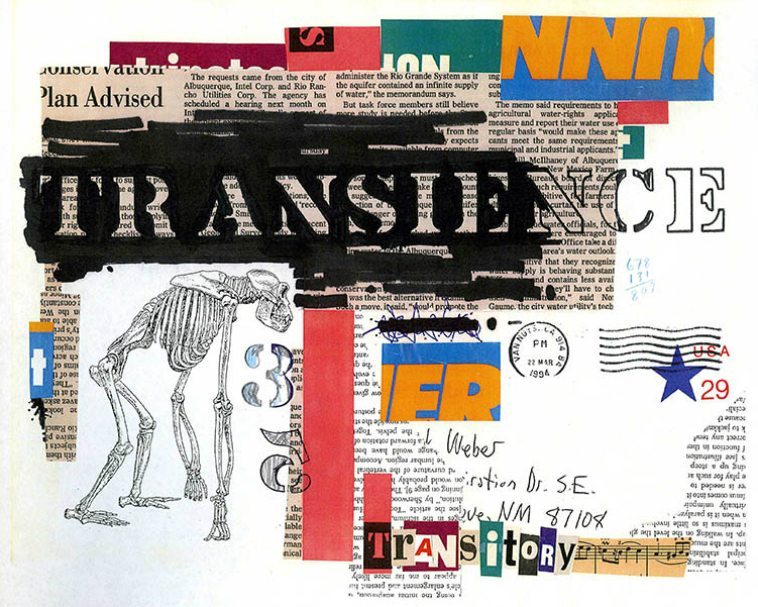 AND SO IT WAS 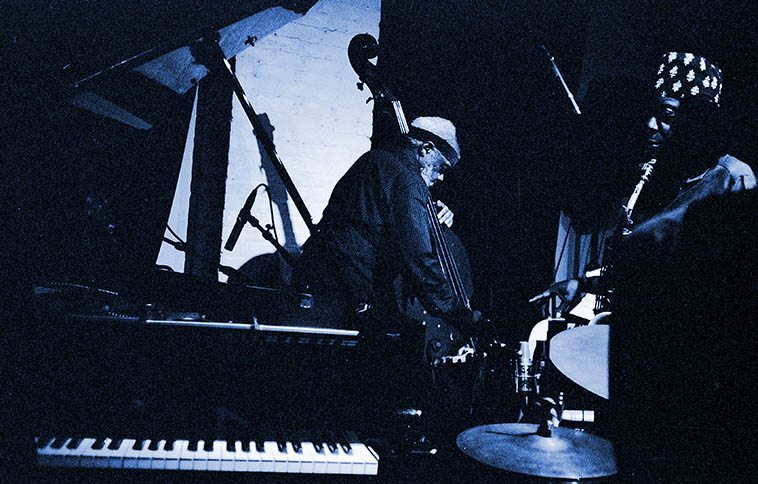 Henry Grimes with the Jameel Moondoc Quartet (including Connie Crothers & Chad Taylor) at The Stone — September 19, 2009 — photo by Mark Weber — I know this band recorded some of their performances (this one for one), I sure wish they’d make the sounds available, there has never been someone like Connie who was so attuned to what Henry was all about —– I had a major epiphany the other afternoon listening to Henry Grimes: ominous dark clouds engulfing New Mexico (I love this time of year — good for fires in the fireplace and reading anthropology) — when Henry read one of his poems then picked up the bass and hooked into the cosmos the way he does so naturally I felt I understood him on a whole new level (cd SPIRITS ALOFT in duet with Rashied Ali, 2009) — I said to him once how much I love his walking on the bass, and how he does it sans a tonal center, just free walking, and he said he was glad I caught that . . . . . 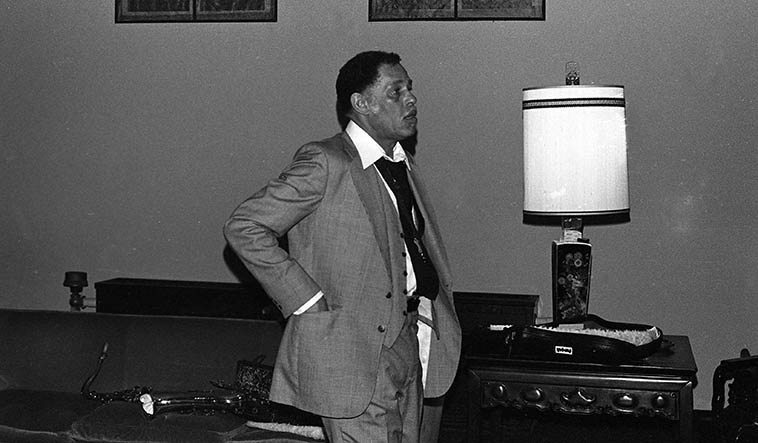 Dexter Gordon — February 17, 1979 — photo by Mark Weber —- Dexter sure smoked a lot of reefer in those days, this night his quartet was on a double-bill with the Basie Orchestra, and we were standing in the wings of Bridges Auditorium, Claremont Colleges, California, right behind Basie as the orchestra came roaring to a stop and left a little hole for Basie to do a little cute tinkle on the piano keys before they roared off into the chase chorus and Dexter grabbed me by the shoulders and started shaking me yelling “BASIE IS SO COOL!” 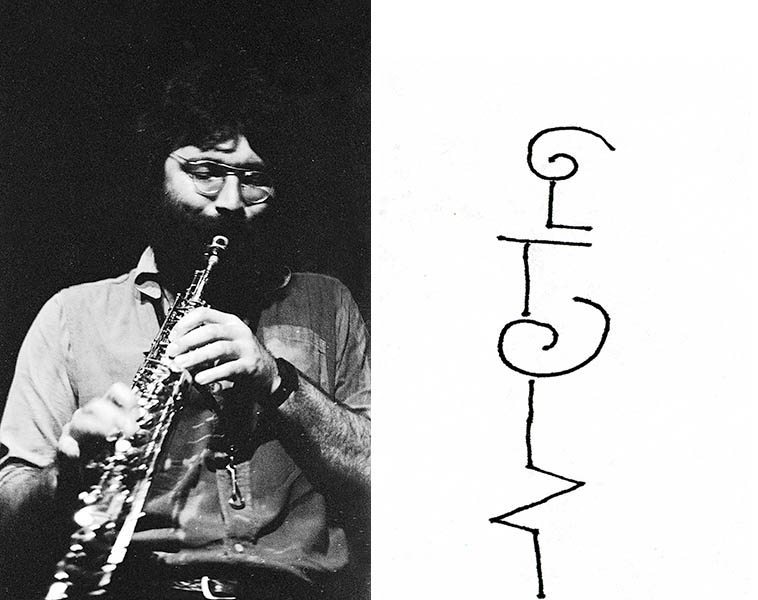 Evan Parker — October 29, 1978 — photo by Mark Weber — His solo work just knocks me out and is completely different than his ensemble approach — with the solo he does things you have never heard before on a saxophone, long coruscating entwined threads that go on for ten, twenty, thirty minutes, circular breathing, with little explosions that pop out the holes completely mystifying and riveting – He has made somewhere in the neighborhood of 14 solo albums and all but one are on soprano saxophone, in the last half hour of today’s show we’ll listen to Evan Parker solo 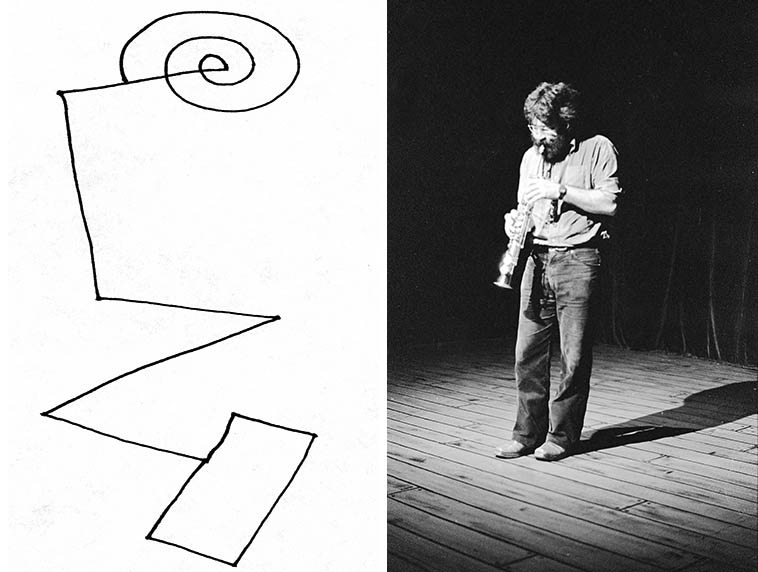 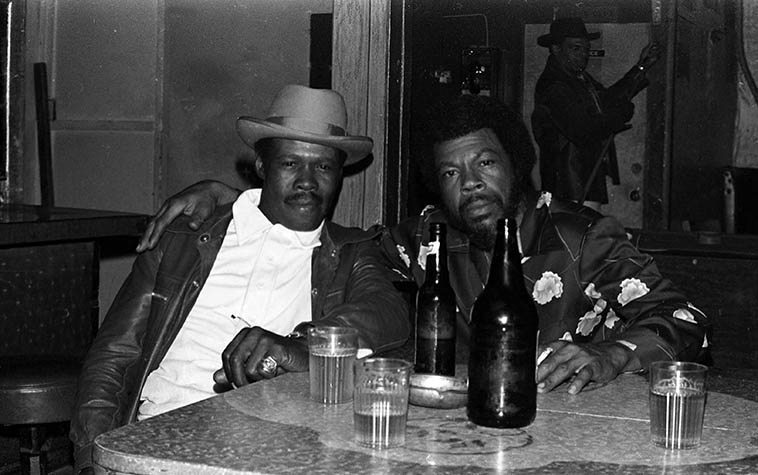 Smokey Wilson (w/ hat) and another guitar slinger Curtis Griffin at Smokey’s Pioneer Club at 88th & Vermont, Los Angeles — June 1978 — photo by Mark Weber — I love that pool cue being chalked behind them —- For whatever reasons I never did do a lot of college (stay in school, my children, it’s important), but I like to tell people it’s because I was hanging out in clubs like this, instead —- the music was hard & tough, and the beer was good, and the culture of Watts and environs was fascinating —– One afternoon hanging out at the Pioneer I got to see where Smokey hid all his money: He lifted up the green slate of the pool table (I didn’t know those were removable) and there was his cash money —– Who could deny the poetry of the blues . . . . 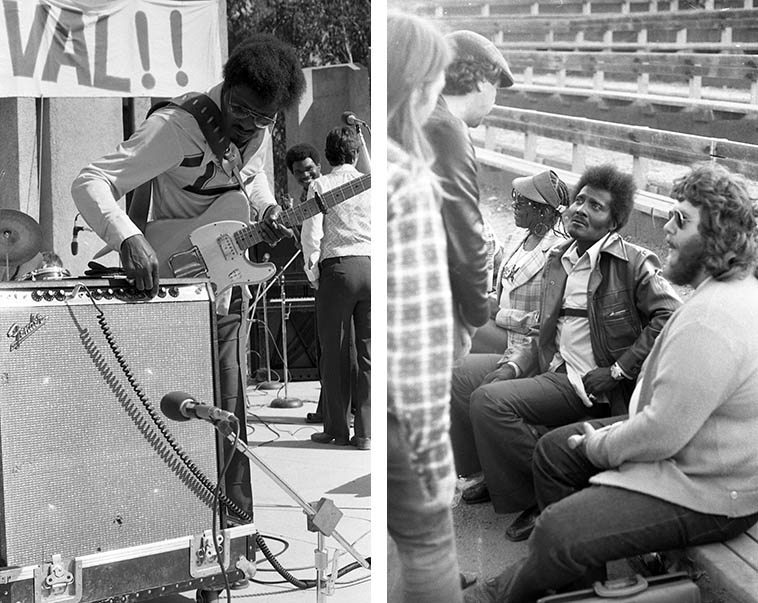 John Breckow interviews Albert Collins — These were good times, we lived in Los Angeles but every summer we’d pile into one of our old beat-up cars and drive the 500 miles north for the San Francisco Blues Festival, we’d find someone to let us sleep on their floor and do the blues thing for a whole weekend ——- John is the guy in sunglasses and he’s the guy who nowadays hosts the Friday jazz show at Noon on KUNM — This shot looks like early evening when the festival was over — those years the festival was in McLaren Park on a hill that over-looked the Bay outdoors in a Greek amphitheater –August 14, 1977 — photos by Mark Weber 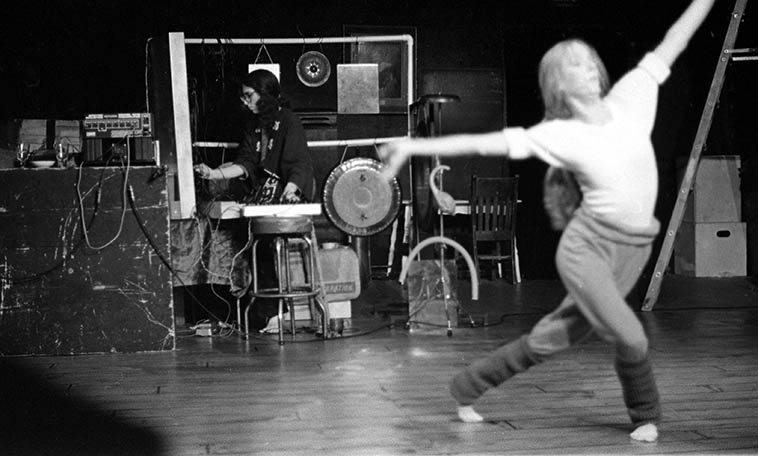 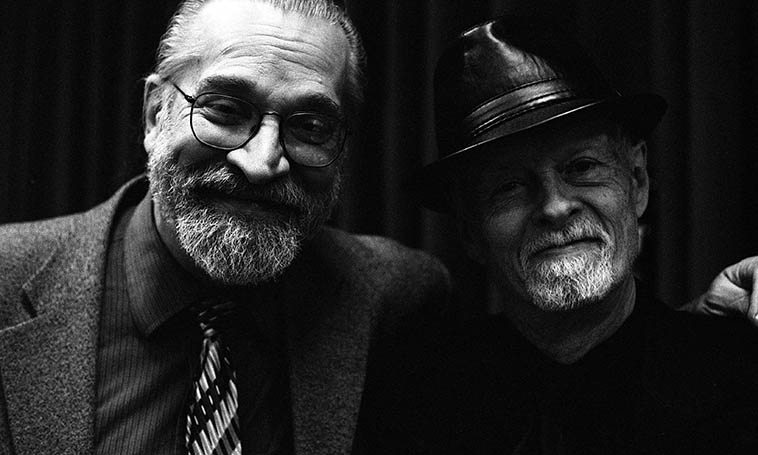 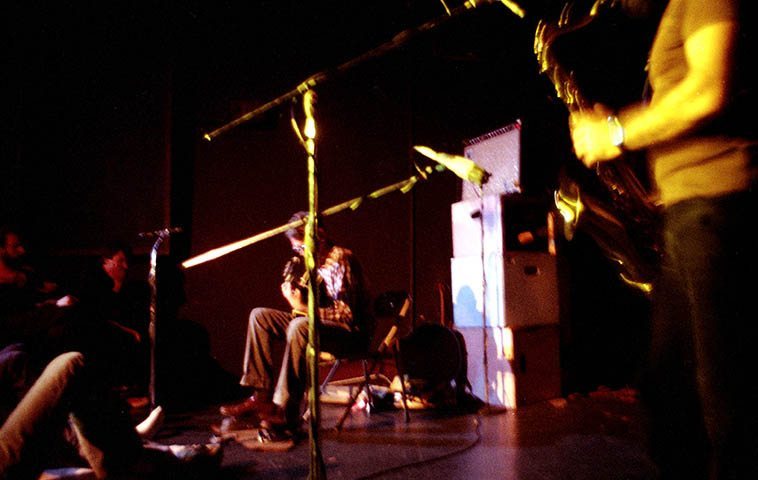 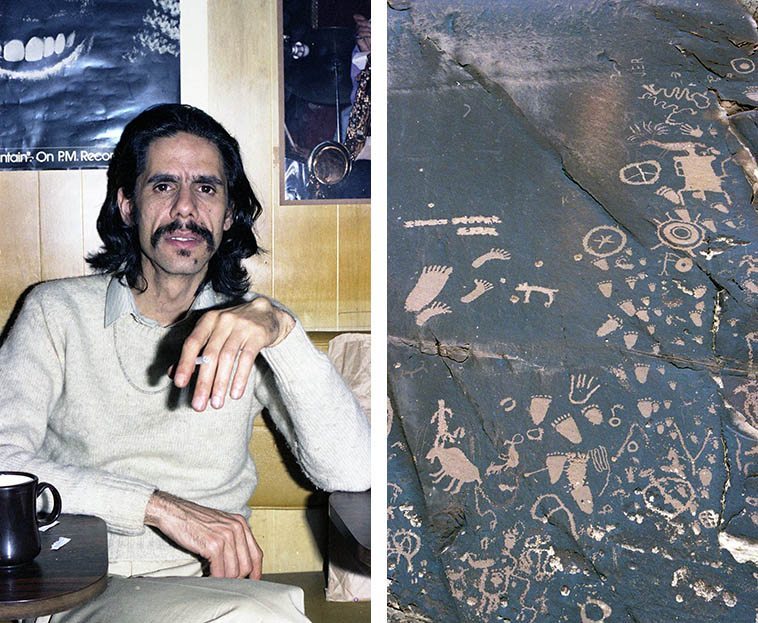 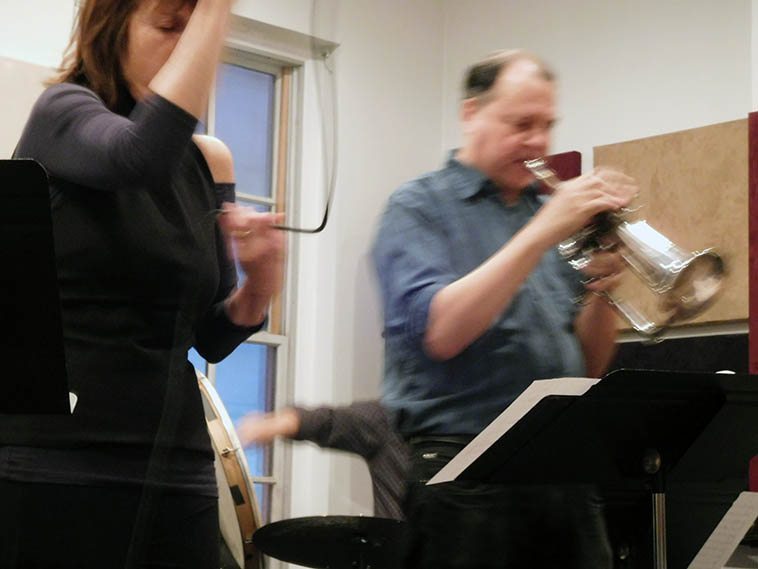 Maryanne de Prophetis Quartet: Ron Horton (flugelhorn), Frank Kimbrough(piano), Satoshi Takeishi(drums — note that he uses a frame drum in place of a kick drum) — this is the same band as her new cd TELL A STAR — November 18, 2016 at Michiko, 149 west 46th Street, Manhattan — photo by Mark Weber who is still learning how to take digital photos — (I have other more “conventional” shots on film from this concert — altho, it wasn’t really a type of gig where you wanted to be snapping photos, it was quiet-like) 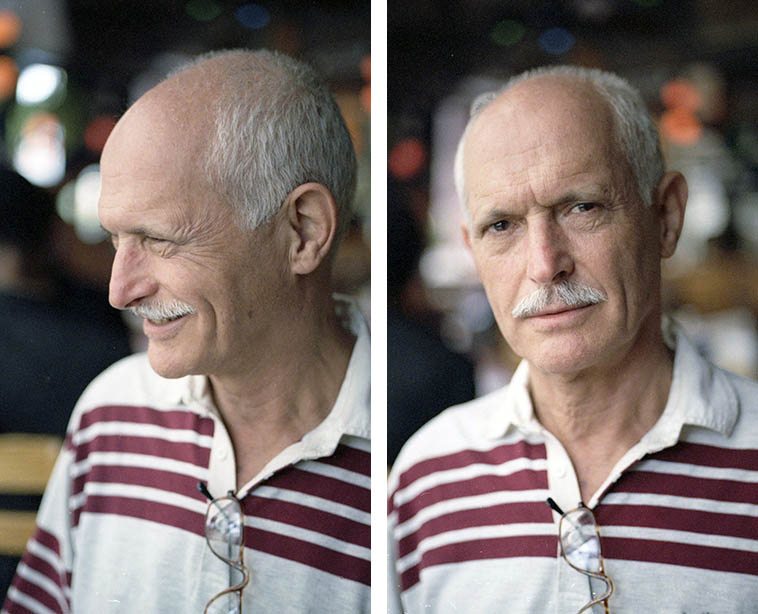 Edward Field, master of the quotidian: seeing the macrocosm in the micro, all done in the narrative lyric homespun style we call plainspeak, in a way you could consider him America’s Cavafy — at a little cafe in the Village (Riviera Cafe, 225 W. 4th, NYC) — September 25, 1992 — photo by Mark Weber

We meet in a cheap diner and I think, God,
the continuity, I mean, imagine
our still being here together
from the old days of the Village
when you had the bookshop on Greenwich Avenue
and Jimmy Baldwin and Jimmy Merrill used to drop in.

Toying with your gooey chicken, you remind me
how disappointed I was with you for moving
to Eighth Street and adding gifts and art cards,
but little magazines, you explain, couldn’t pay the rent.
Don’t apologize, I want to say, it was forty years ago!

Neither of us, without clinging to our old apartments,
could pay Village rents nowadays,
where nobody comes “to be an artist” anymore.
Living marginally still, we are shabby as ever,
though shabby was attractive on us once — those years
when the latest Williams or Stevens or Moore was sold
in maybe five bookstores, and the Horton
biography of Hart Crane an impossible find.
Continuity! We’re still talking of our problems
with writing, finding a publisher,
as though that was the most important thing in the world.
Sweetheart, we are as out of it as old lefties.

Someone came into my apartment recently and exclaimed,
“Why, it’s bohemian!” as if she had discovered
the last of a near-extinct breed.
Lady, I wanted to protest,
I don’t have clamshell ashtrays,
or chianti bottles encrusted with candle wax,
or Wilhelm Reich, Henry Miller and D.H. Lawrence,
much less Khalil Gibran and Havelock Ellis,
on my bricks-and-boards bookshelves!
But it’s not just the Salvation Army junk she saw,
or the mattress and pillows on the floor.
My living style represented for her
the aesthetic of an earlier generation,
the economics, even, of a time,
our time, Rosetta, before she was born.

The youth still come weekends, though not to
“see a drag show,”
or “bull daggers fighting in the gutters,”
or to “pick up a queer or artist’s model.”
But there is something expectant in them
for something supposed to be here, once called,
(shiver) bohemian. Now it’s I who shiver
as I pass them, fearing their rage against
an old guy with the sad face of a loser.
Daytime, it’s safer, with couples in from the suburbs
browsing the antique shops.
I find it all so boring, but am stuck here,
a ghost in a haunted house.

At a movie about a war criminal whose American
lawyer daughter blindly defends him blasted by the critics
because it is serious and has a message
the audience is full of old Villagers, drawn to see it
because it’s serious and has a message,
the women, no longer in dirndles and sandals,
but with something telltale about the handcrafted jewelry,
the men not in berets, but the kind that would wear them
couples for whom being young, meant being radical,
meant free love. Anyway,
something about them says Villager,
maybe the remnants of intellect, idealism
which has begun to look odd on American faces.

Nowadays, there’s nothing radical left, certainly not
in the Village, no Left Bank to flee to, no justification
for artistic poverty, nothing for the young to believe in,
except their careers, and the fun of flaunting
their youth and freaky hairstyles in trendy enclaves.

Leftovers from the old Village, we spot each other
drifting through the ghostly
high rental picturesque streets, ears echoing
with typewriters clacking and scales and arpeggios
heard no more, and meet fugitive in coffee shops,
partly out of friendship, but also, as we get shabbier and rarer,
from a sense of continuity like, hey, we’re historic!
and an appreciation, even if we never quite got there,
of what our generation set out to do.