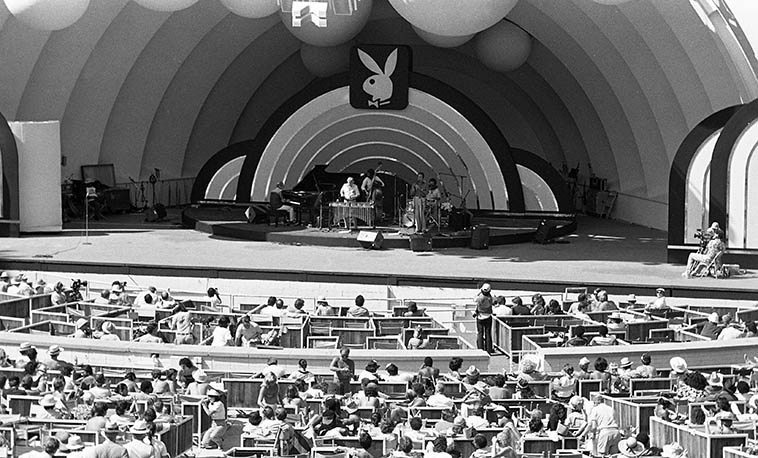 The Terry Gibbs – Buddy DeFranco Quintet at Hollywood Bowl Playboy Jazz Festival — June 20, 1981 — Ross Tompkins (piano), Scott Morris (drums), Marshall Hawkins (bass) — photo by Mark Weber —– Terry Gibbs worked with Benny Goodman off & on for years and speaking of BG’s legendary spaciness (page 118 of his memoir GOOD VIBES) Terry says: “He could memorize anything except your name. He called everybody in the world “Pops,” women, children, dogs, fire hydrants, you name it. Everybody was Pops. One time we were rehearsing up at his house in Connecticut and his wife Alice came in and said, “Benny, should I bring the guys some Cokes?” Benny said, “Now now, Pops.” He couldn’t remember his own wife’s name! He called her “Pops.””

I COULD WRITE A BOOK

Have you ever wondered why pigeons bob their heads when they walk? I mean, they really bob that thing. I tried doing it myself while walking to yoga the other day and it’s not easy. Too much like chewing gum and walking at the same time.

I have always regarded the theory that lizards do push-ups so that they can create a stereo image in their heads as quite plausible. A lizard laying prone on a rock in the sun will stay in the lower position for three seconds then lift into a higher position and hold that for three seconds, then repeat. I havent kept up with my herpetology but as far as I know we still don’t know why. You know birds and lizards are related. And they both have eyes on opposite sides of their heads. which means their brains translate two separate channels of information simultaneously. Humans can’t do that. And with two eyes they have 360 degrees field of vision. Also, birds can see both microscopically and into the further distance all at once. But, having only one eye for each field of vision (humans see only 200 degrees) means you (the lizards & birds, not you perzactly) have no depth of field. So, they bob their heads and they do push-ups.

Today on the jazz show, as always, we’ll be expanding our perspective. 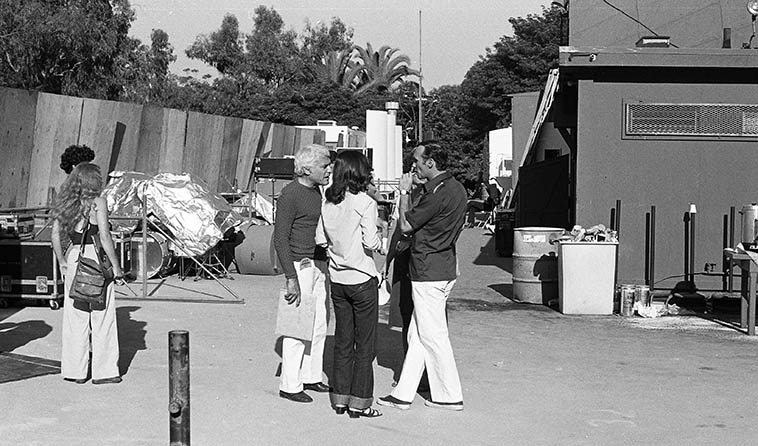 Backstage at Hollywood Bowl Playboy Jazz Festival: Pianists Lou Levy and Ross Tompkins and I’m pretty sure that’s the jazz scholar Patricia Willard that they are talking with — June 20, 1981 — photo by Mark Weber 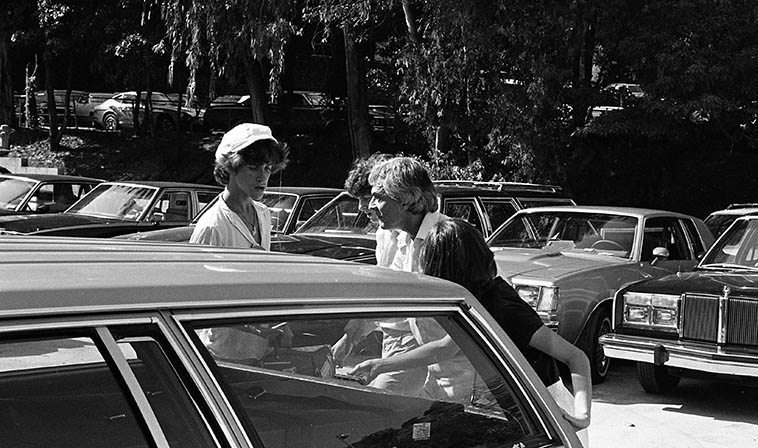 Terry Gibbs unloading his vibraphone at Hollywood Bowl — June 20, 1981 — photo by Mark Weber (I think that might be his son Gerry the drummer that he’s looking at) 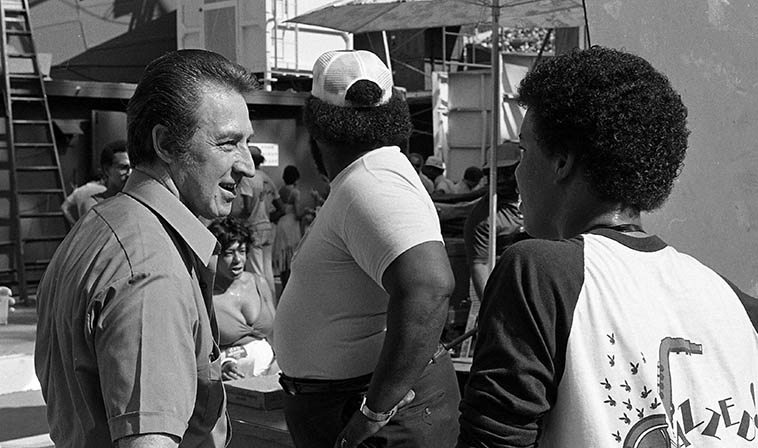 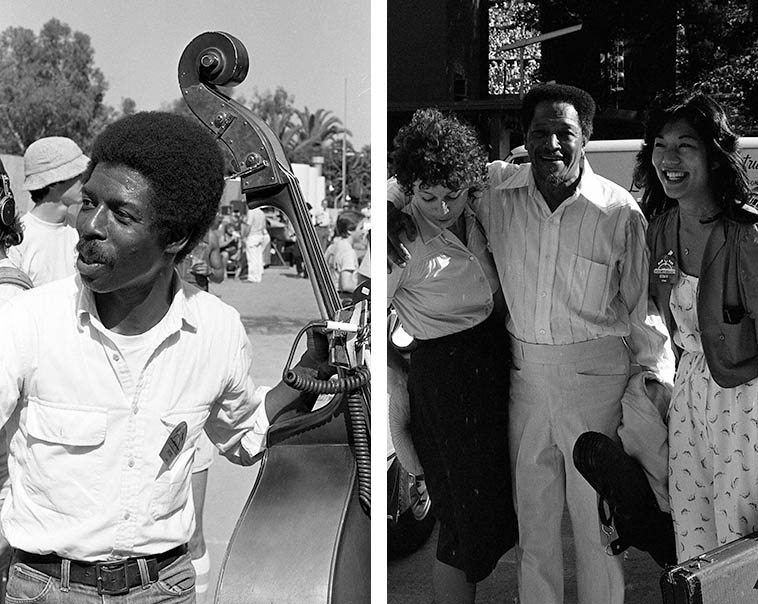 Bass player Marshall Hawkins and Illinois Jacquet, who sat in with the Gibbs-DeFranco Quintet — June 20, 1981 — photo by Mark Weber — In Terry Gibbs autobiography he says (page 40) that when they were kids in Brooklyn, Tiny Kahn dubbed Illinois: “Chicago Vestcoat” (and Big Sid Catlett as “Big Veal Cutlet”) 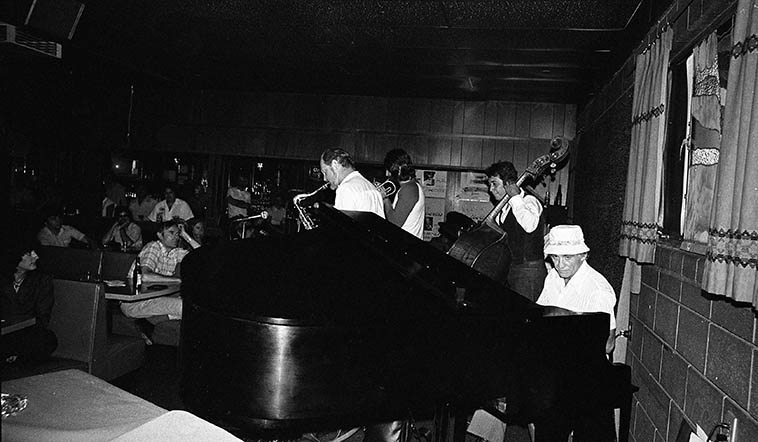 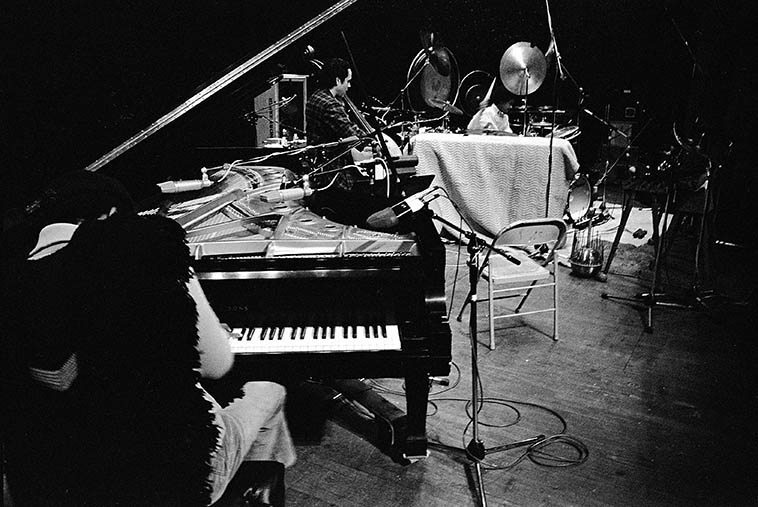 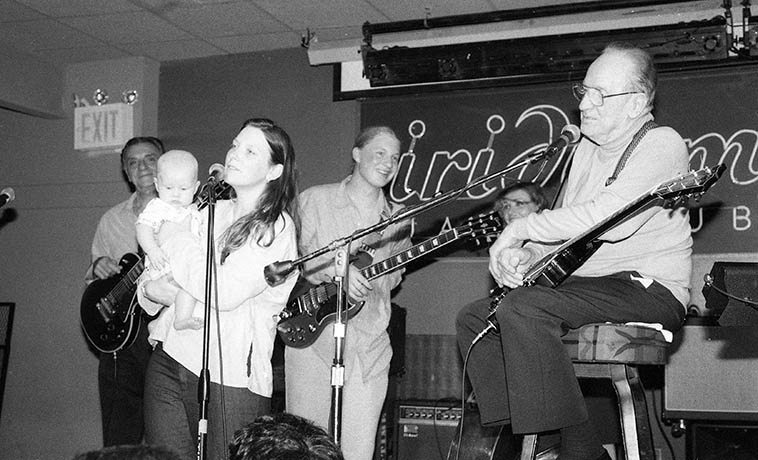 Les Paul always let people set in at his regular Iridium gig on Broadway — I would have loved to hear Mary Redhouse when she sang a Navajo grass dance with him, altho, I believe she started him out on “Slow Boat to China” — This photo is Susan Tedeschi and Derek Trucks with their child, sitting in — Susan sang “Rock-a-Bye Your Baby With a Dixie Melody” w/ Les’s regular trio Nicki Parrott (bass) and Lou Pallo (guitar) — they killed it, it was so good, next time I was in town I dragged Connie Crothers there to hear Les — July 22, 2oo2 — photo by Mark Weber (RIP Derek’s uncle Butch died January 24, 2017) 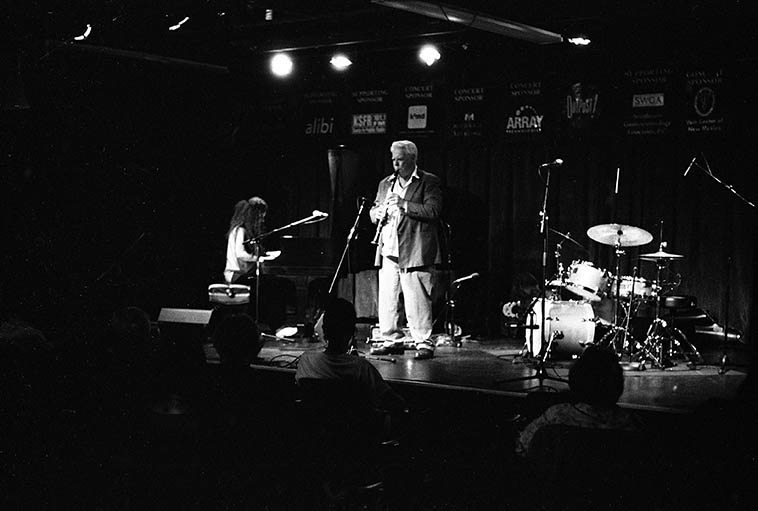 Carol Liebowitz and Bill Payne duo (was suppose to be their trio with Eva Lindal but a performance Visa from U.S. State Dept was impossible — Eva lives in Stockholm) —– May 6, 2o16 Outpost Performance Space — photo by Mark Weber — Today we’ll listen to their Trio cd preceded by a pre-recorded introduction to the music by Bill Payne —- I think of how Connie always wanted a music that created itself out of intuition and instances of telepathy and thought transference, hence, she used hardly no arrangements, and no contrived pre-determined movements —- spontaneously composed music is what Carol & Bill & Eva play 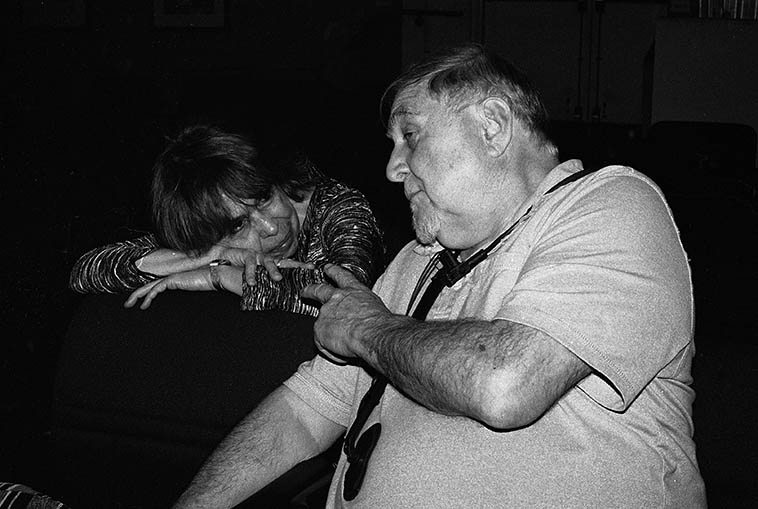 A pianist and a saxophonist: Virg Dzurinko and Charley Krachy — May 5, 2o16 — photo by Mark Weber 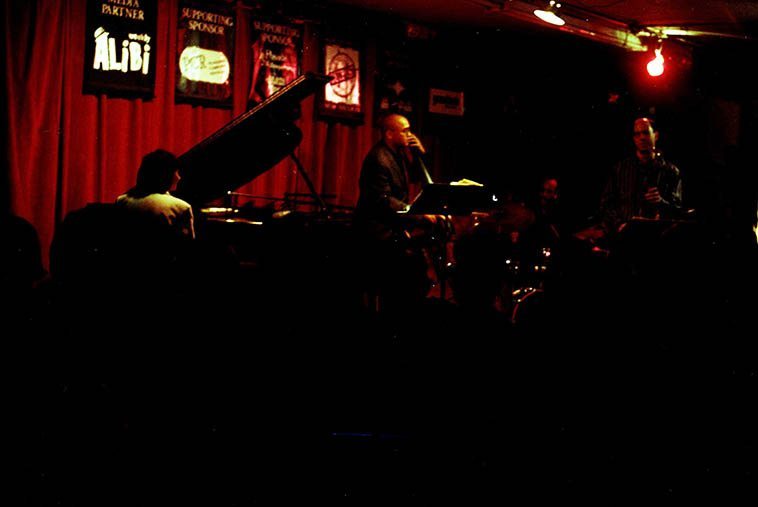 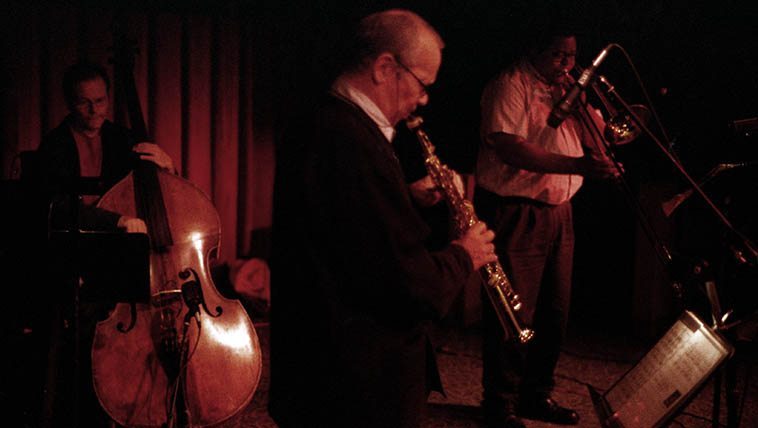 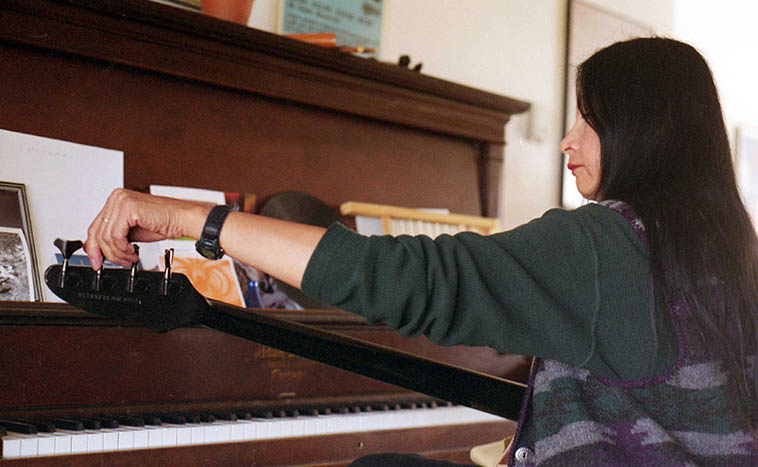 Mary Redhouse, one of the greatest free singers I’ve ever heard — she might be one of the best straight jazz singers I ever heard, but I’ve never heard her sing straight, she always goes for the universe, she could go from Mildred Bailey, to Billie, to Loretta Lynn, to Sheila Jordan, all in a ten minute stretch, birds, whales, crickets, were all in there, someone comes in the room and she mimics the squeaky door. I once asked her how she can sing like Mildred, then Billie, then Sheila, or Patsy Cline, and she said “I just put on their masks.” She sang in my Bubbadinos band, and another band I had called The Weeds. I haven’t seen Mary in a coon’s age. She lives in Tucson. Last I spoke with her she was working as a pre-school teacher. Photo by Mark Weber at Studio 725 Albuquerque — October 30, 2000 — (Mildred Bailey was Coeur d’Alene tribe) 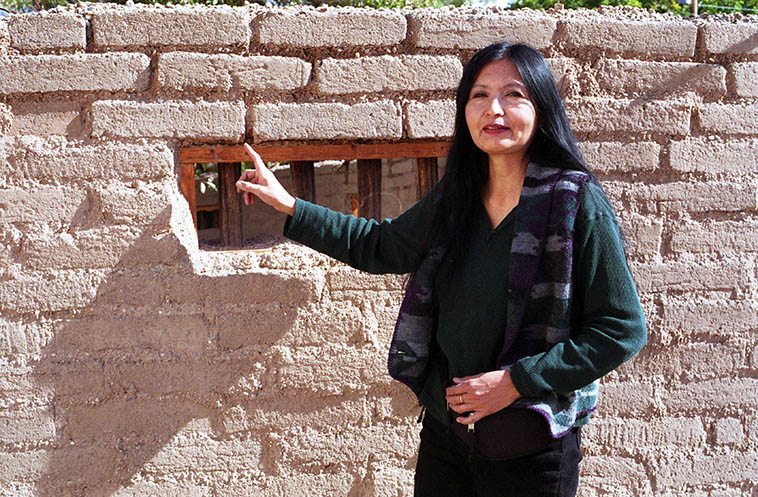 Mary Redhouse at 725 on October 30, 2000 ———- Another time I was pounding out some barrelhouse on the piano and Mary started belting the blues like she was Bessie Smith — we recorded that stuff, it was hilarious ——– photo by Mark Weber — Today we’ll listen to some of Mary’s unbelievable singing 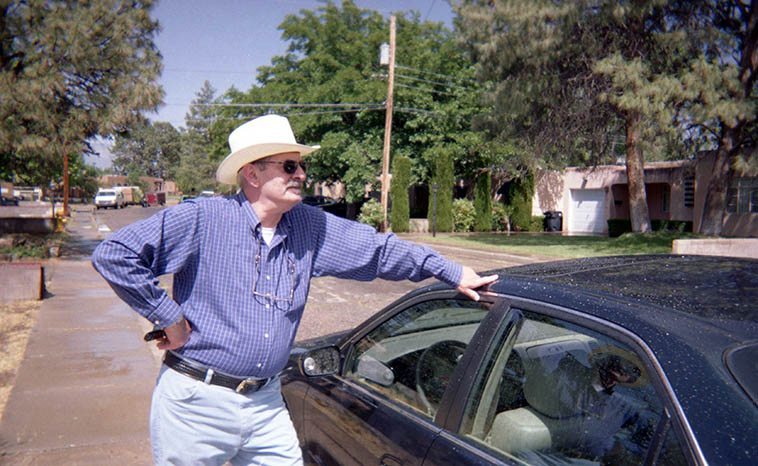 That’s the street I live on and that’s Kenny Davern and it looks like it just rained? Weird. It hardly ever rains in Albuquerque — July 4, 2oo4 — When it does it’s when the Tarahumara send the clouds north from the Cobre Sierra Madre Mountains in Chihuahua, Mexico — Photo by Mark Weber