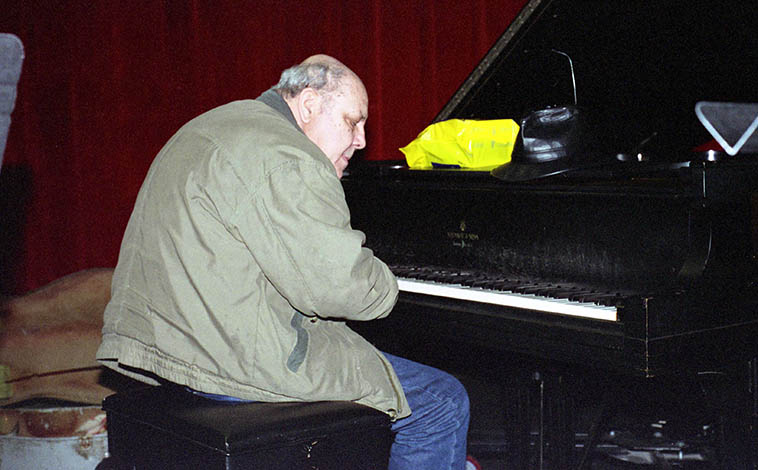 I first heard Misha Mengelberg on Dolphy’s LAST DATE (1964) album when I was young and didn’t really have any qualified opinion worth repeating other than that I liked it a lot and that it is still my favorite Dolphy album.

We were lucky to have the ICP Instant Composer’s Pool visit New Mexico five or six times through the auspices of the Dutch government and Outpost Performance Space, where this photo comes from (afternoon soundcheck — March 17, 2003). One time I was on the telephone with Kenny Davern and had to ring off to make the concert and said “Kenny, I got to get off, I got to get over to the Outpost to see the ICP and if you have any sense you’ll get over there, too, this is one of the greatest ensembles on the planet.” And never expecting him to show up, lo & behold, about 15 minutes into their first set, in the door comes Kenny. I groaned, as I figured this was NOT Kenny’s thing. And of course, right at that moment Misha takes a serious-like classical-sounding piano solo and during the solo reaches over and gets a glass of water and takes a long drink while his other hand is tinkling some phony “serious” baloney.

Kenny Davern was a devotee of classical music. I’m thinking: Kenny is going to kill me. BUT, at the intermission break, I walk over to see Kenny, standing with some other musicians, and he jumps in my face, “THESE GUYS ARE INCREDIBLE, JUST FANTASTIC!” I’m confused and want to ask if he’s been smoking anything besides his Camel nonfilters? So, I take him backstage to introduce him and the whole band is excited that Kenny is there and Kenny looks at Han and says “Cliff Leeman” and Han starts jumping up & down “YES, YES, YES!” and Han raises his right leg that has the rolled up cuff just like Leeman’s on the bass drum for the cover of Eddie Condon’s renowned album JAMMIN’ AT CONDON’S (1954)(Columbia CL616).

So, the librarians start going through their band book and pull every 1930s Duke, Hoagy, and Louis chart they had and the entire second set was for Kenny. After which, Kenny stood next to the stage as they packed up and lovingly pleaded “Take me with you.” There were times when I got to drive the band around Albuquerque and mostly back & forth to the hotel.

It was a big travel van with 3 rows of seats, not counting the driver’s. And one time we’re driving down Central (old Rt.66) and their manager Susanna von Canon is going over some upcoming concert details with Misha — Misha is sitting dead-center of the van, sitting unusually straight up with both hands on his knees watching the sights, and Susanna is trying to remind him of a certain detail “Oh, Misha, you remember that guy . . .” and he yells, “I REMEMBER NOTHING!” and the whole van erupts in laughter — this was at the beginning of his Alzheimer’s and it was no more pronounced than what any aged brain goes through, so it was hilarious, but more so, was how he mimicked Maximilian Schell in the 1975 movie A MAN IN A GLASS BOOTH, an Adolf Eichmann deranged re-enactment of Nazi war crimes trial — a brilliant movie. Rest In Peace Misha Mengelberg (1935-2017) — photo by Mark Weber

[untitled]
7 used to be my favorite number
I don’t know why, I was young, was it the sound of it?
or the way it looked?
I remember those years
I thought I had invented the word Pennsylvania
and went around singing it
When I heard the word on the car radio
from the backseat of dad’s Plymouth I was
dumbfounded — Had that guy been watching me?
mohair, door post straps, my mom’s bouffant, strawberry blonde,
—- I hadn’t a clue what a pennsylvania was, whatever it was, it was mine —-
windwings, three on the tree, ethyl or regular?
“KFWB channel 98!” singsong jingle
a little canvas bag hanging over the front bumper
that says H2O
I didn’t know it then but World War 2 had changed America 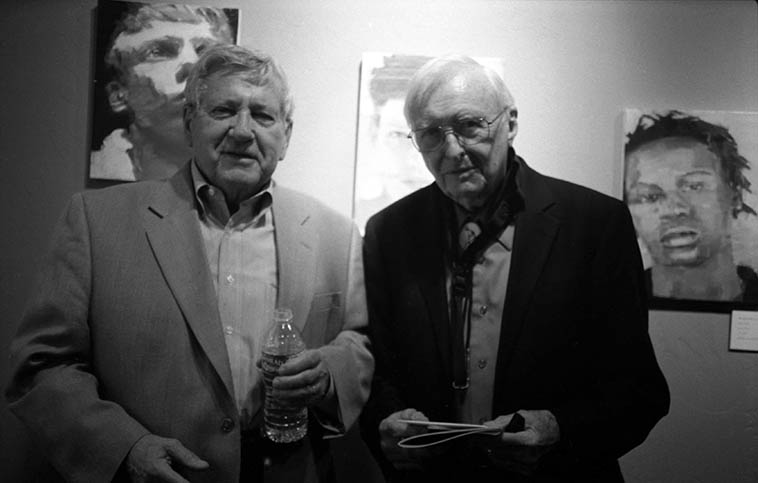 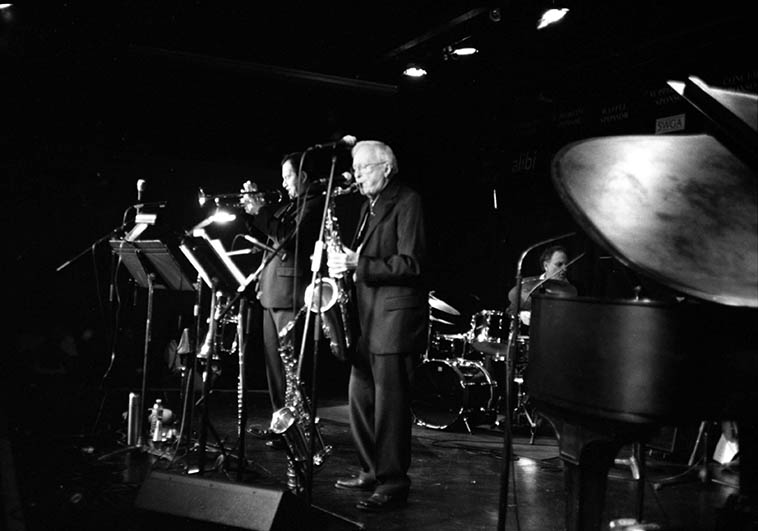 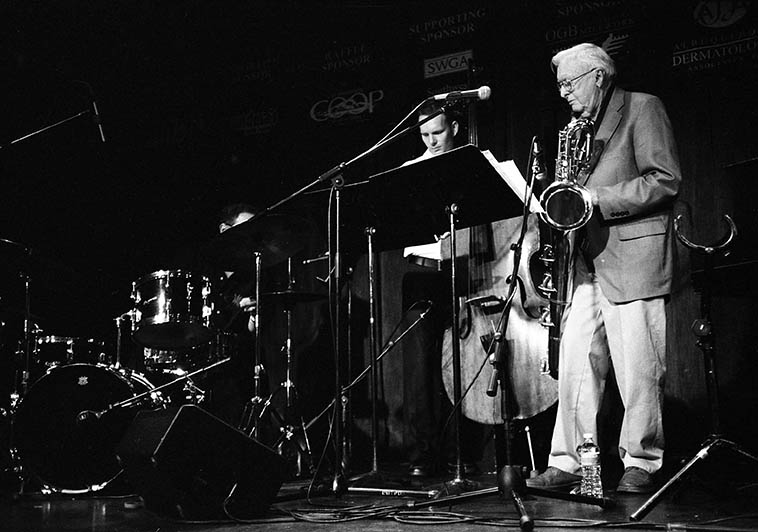 This shot is remindful of how scholars of the Beowulf poem have endeavored to look into the otherwise closed and unknown thought world of Anglo-Saxon warrior culture — How the internal and external world are right in front of you during a jazz performance — How we all need protection — This is the Arlen Asher Baritone Saxophone Trio’s Tribute to Gerry Mulligan (I wish this had been recorded, it was off the map!) w/ John Trentacosta(drums), Michael Glynn(bass) — March 15, 2o12 — photo by Mark Weber 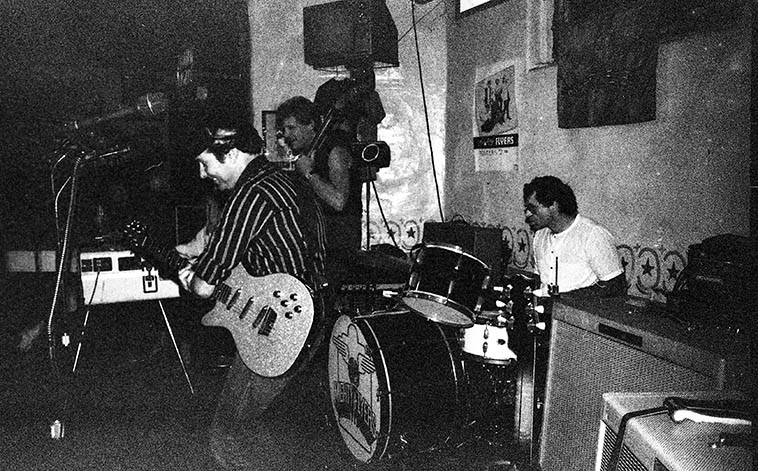 The legendary one-armed blues guitarist Steve Samuels sits in with Rod Piazza’s band at Carlos O’Brien’s, Riverside, California — September 28, 1985 — photo by Mark Weber (from what I can gather off the Internet, Steve passed away in July 2014 and couldn’t have been much older than me . . . .) w/ Ed Mann (drums) and Bill Stuve (bass) 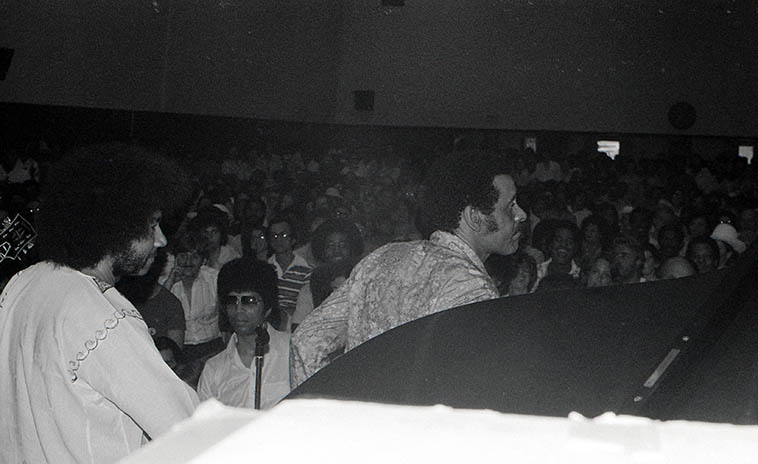 Ernie Andrews sings for Blue at Blue Mitchell’s Memorial at Local 47 — June 10, 1979 — photo by Mark Weber —- Can anybody identify the fellow on the left with the afro? The person with the guitar is Kenny Burrell —- Michael Vlatkovich was telling me the other day that the musician’s union has sold that building, the property was so valuable there in Hollywood, and that in May they are relocated out to Burbank — That makes me sad . . . It was/is such an interesting club house for musicians. 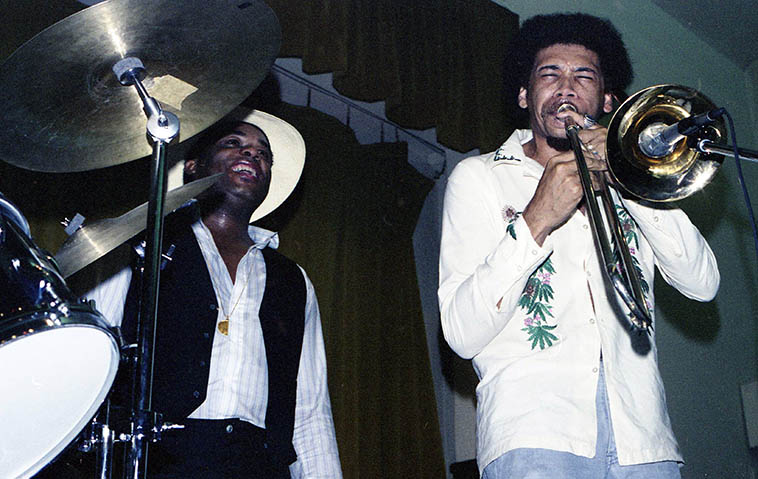 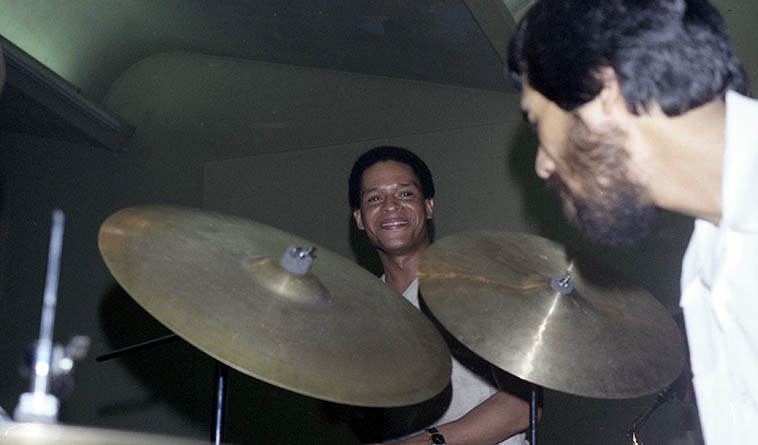 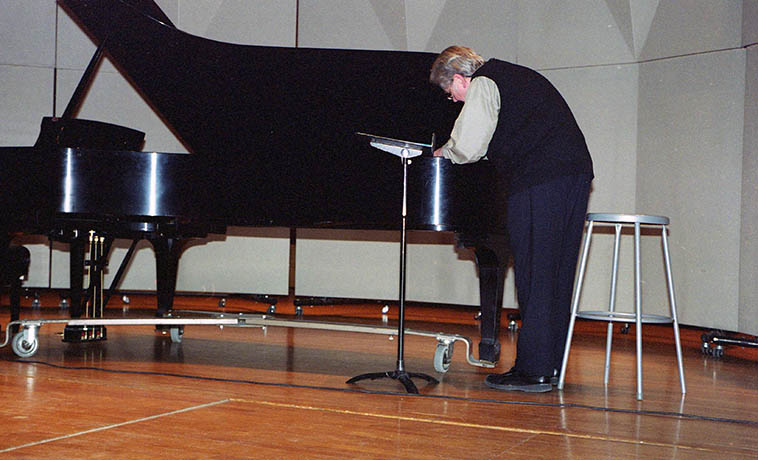 Gordon Mumma preparing the piano for the recital of his music at Keller Hall, University of New Mexico — April 1, 2008 — photo by Mark Weber 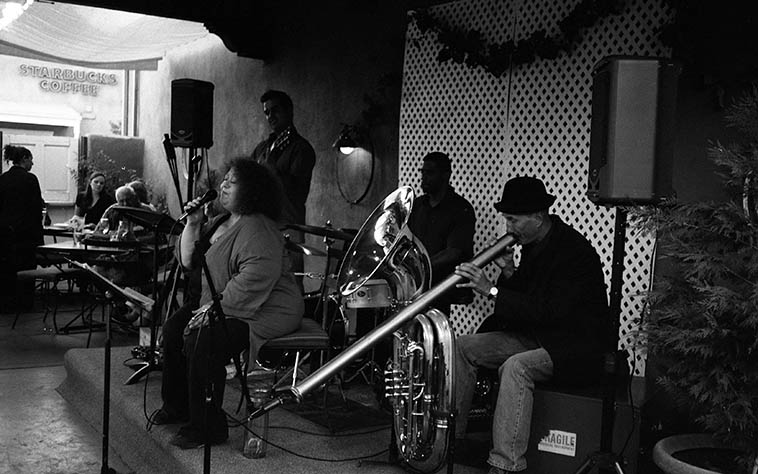 “When I was first starting to sing jazz, I discovered her, maybe heard her on the radio, not sure how. She blew me away. The song was Anthropology (which I am playing on my show today by the way). The way she scats is so fluid and at the time, was so different than the Ella school of Scat. I liked it a lot better and I’ve worked on it for years, but I can’t even approach Sheila’s genius. She is the joy of jazz. Her vocals are freedom & movement as she profoundly colors inside & outside the lines. She is simply the best.”

*Patti is the Wednesday jazz host on KUNM as of April 22. A day that will go down in infamy. 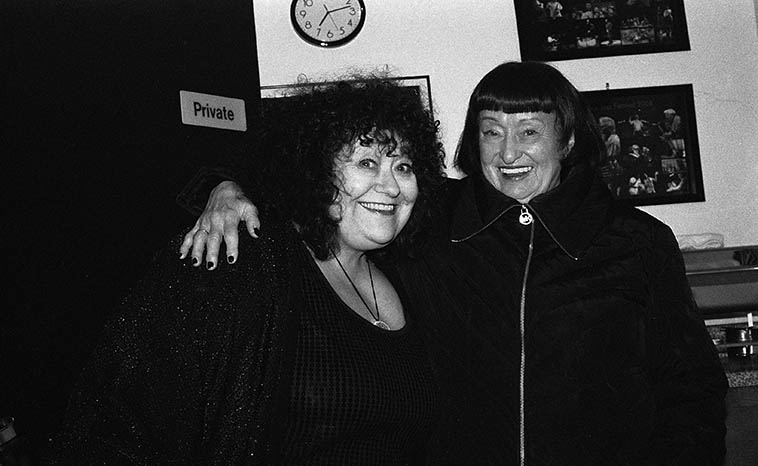 Patti Littlefield and Sheila Jordan — Patti says she was so blown away to be standing with Sheila, the person she’d been listening to on records for years and years, that she doesn’t even remember this shot — backstage at Outpost where they were sharing a double-bill March 5, 2o15 — photo by Mark Weber — Sheila will be visiting the Thursday Jazz Show next Thursday (March 23) 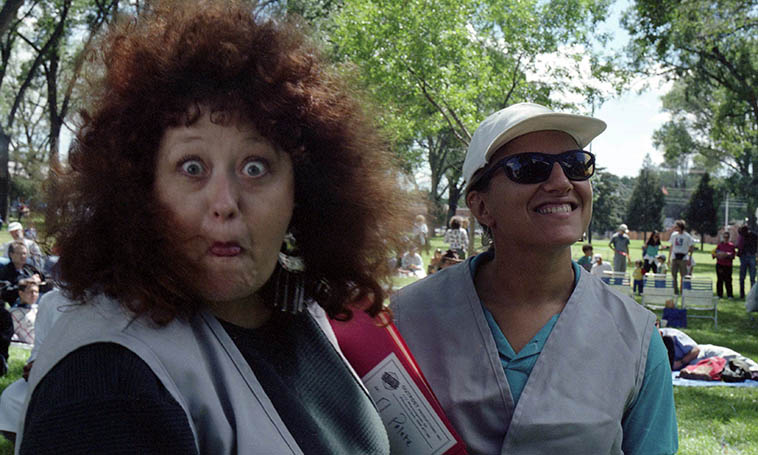 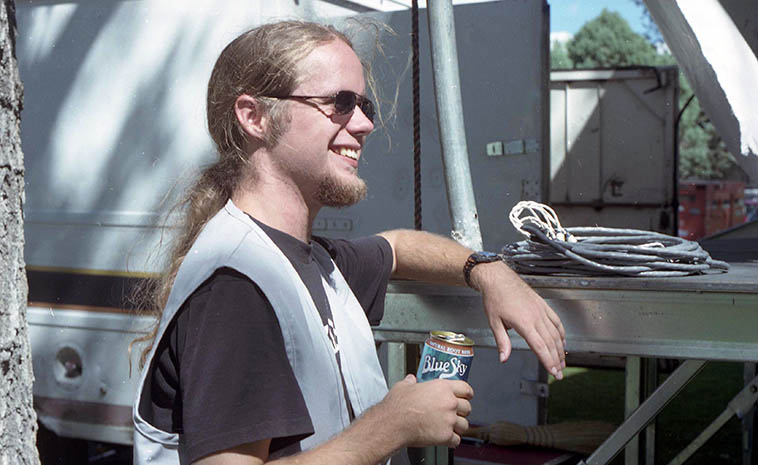 Patti Littlefield’s son Jesse Randell — September 15, 1996 — photo by Mark Weber — Jesse lives in Oakland, California these days (he grew up in Albuquerque) and teaches music at Alameda High on Alameda Island in the San Francisco Bay. He plays drums in Blue Bone Express and his mother tells me he is also a pilot and writing a screenplay. 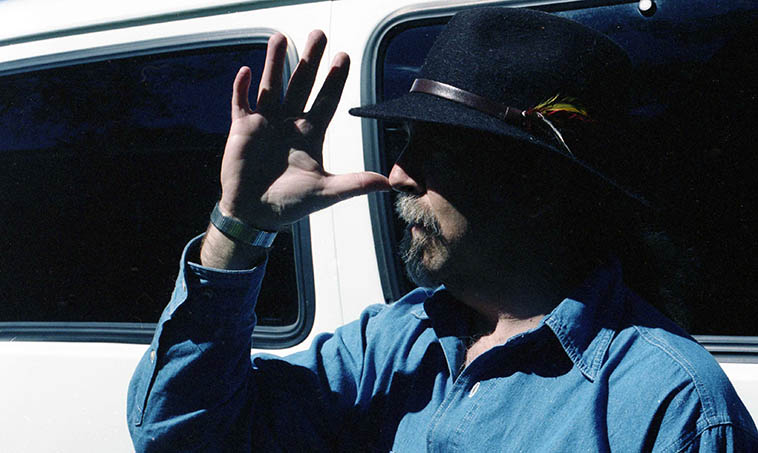 Patti Littlefield used my camera to take this picture of me — September 15, 1996 Albuquerque — I’m not sure which mudra that is, it might be the half-garuda mudra