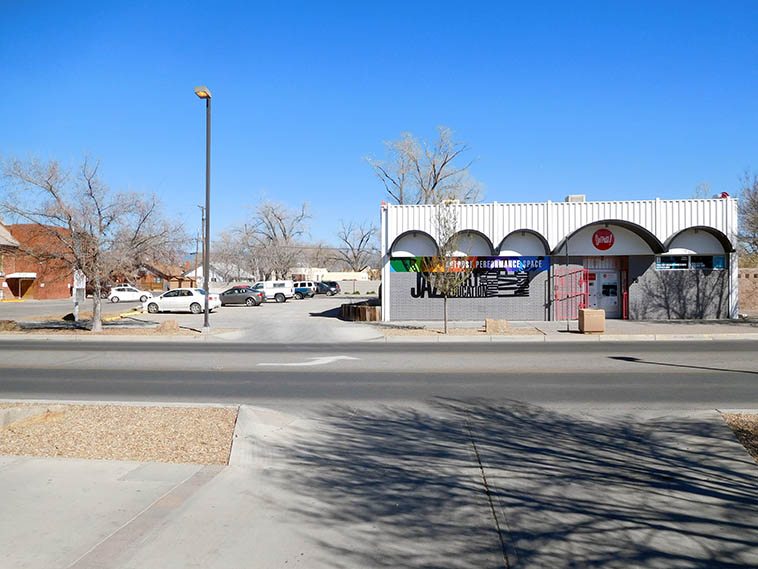 Today on the Thursday jazz show we have the ardent pleasure to have as our guest Live in-studio at KUNM the great great great granddaughter of Queen Aliquippa the Mingo Seneca chief of the Iroquois Nation: SHEILA JORDAN, who was raised in the western Pennsylvania coal mine hilltowns that previously were Queen Aliquippa’s homeland along the three waters of Allegheny, Monongahela, and Ohio Rivers.

It is yet one more confluence of influences that made Sheila Jordan: singing in those beer gardens in the Allegheny Mountains with her grandfather who called her Little Song, to Detroit in her teen years, Charlie Parker, Lester Young, Billie Holiday, New York City, marriage to an absent junkie husband, raising a daughter in the big city, George Russell, Lennie Tristano, Escalator Over the Hill, always singing always, Steve Kuhn, Harvie S, house burning down, Cameron Brown, Flexible Flyer, yesterdays, inchworm, to her own Crossing of the river into new life every day.

When she walks on stage all of that comes along with her, but “never an imitator … all of the influences are so thoroughly absorbed” (Andrew Rowan liners to album THE CROSSING)

Into it and out of it
is how it seems if you’re not listening closely
she’s on the tip of the diving board
showing us that there is no difference between in and out, really,
she’s singing true to herself
“I am a messenger of the music” is how she puts it, and
“Jazz will never die” 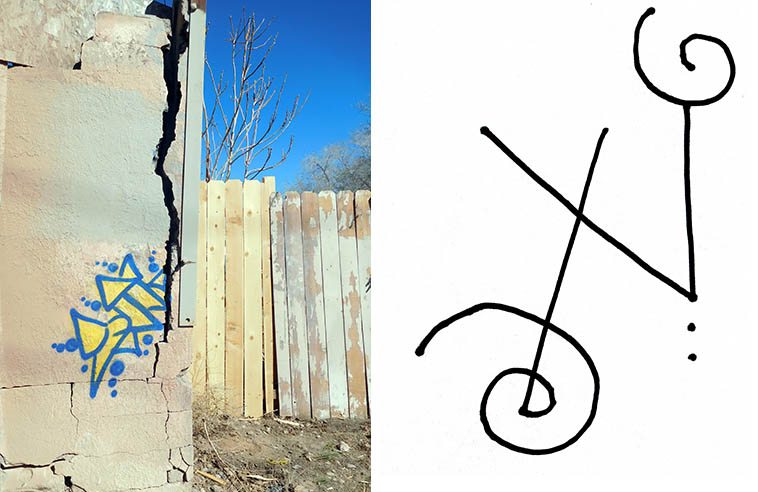 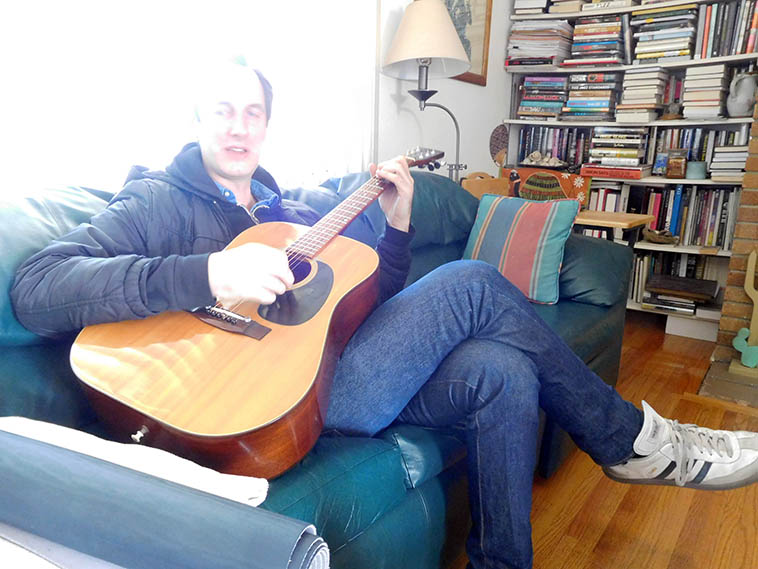 A recent visitor to Studio 725 from NYC: Adam Caine testing out my old box — February 24, 2017 — photo by Mark Weber —- Maybe that’s what jazz is: A reckoning of the non-Pythagorian elements of chords (ever since the adjusted “tempered” keyboard, chords are not cadenced in perfect harmony, the notes rub up against each other) — Maybe that’s one of the wellsprings of jazz? I have always wonder’d why there are those of us who like jazz and that we are in the minority — could it be this slight distortion in the music? It has an edge. By “edge” I mean a sort of agitation that is not resolved. The distortion is ever so slight, subliminal, and maybe jazz has been a glorification of this non-reconciliation? 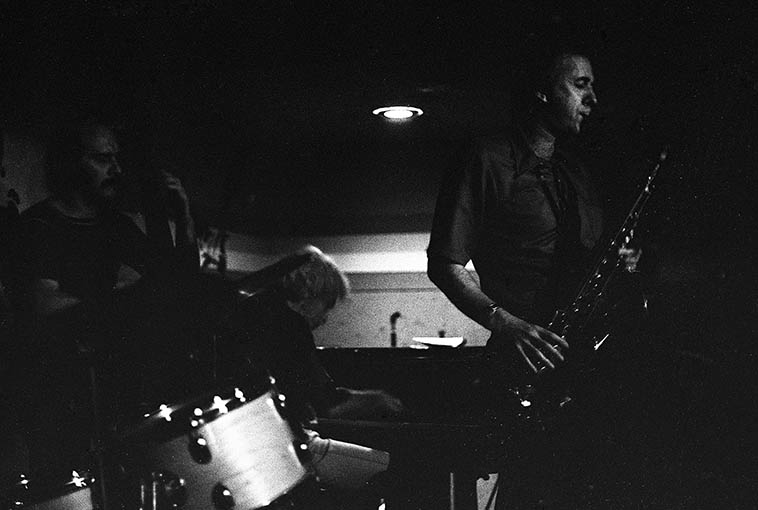 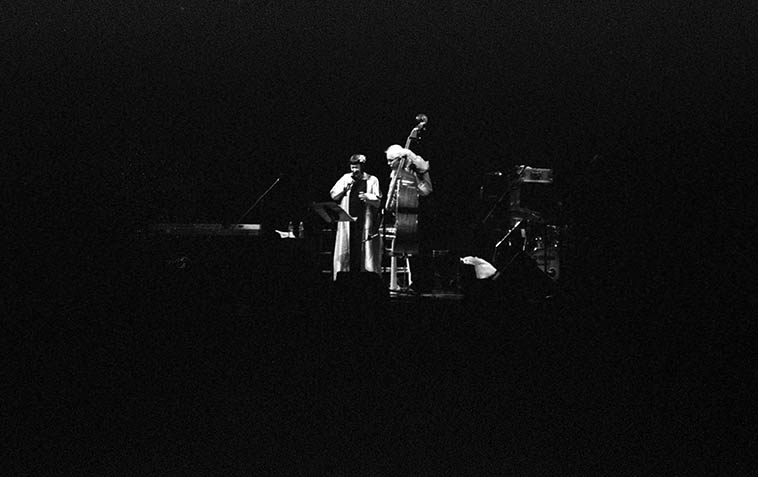 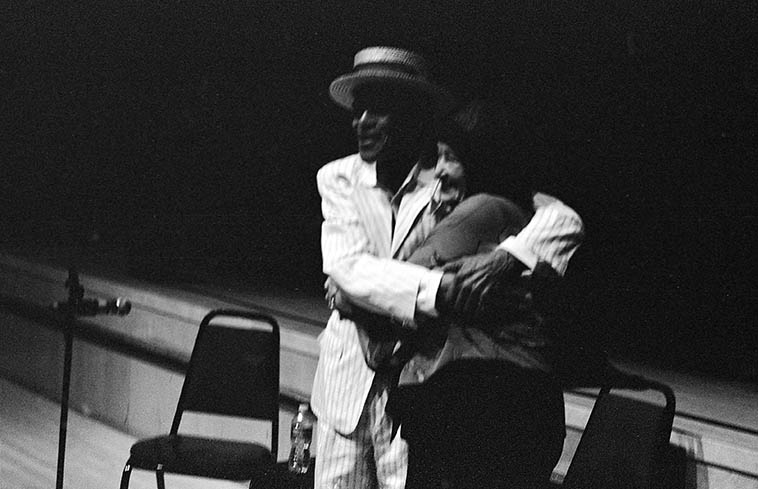 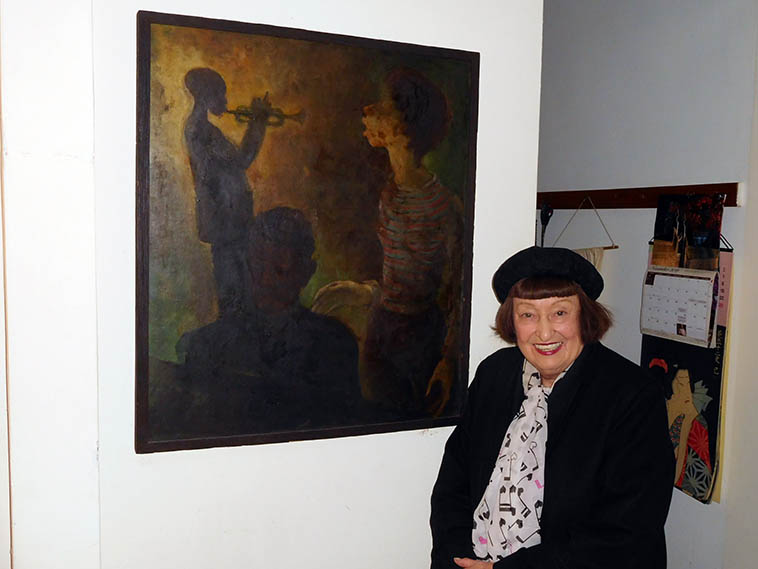 Sheila Jordan in her apartment on 18th Street, Manhattan, with her painting by Virginia Cox (oil on board, early 60s) “Virginia was one of the few black women painters on the scene then, nobody ever asks about that painting. That’s Duke (Jordan) and Miles and me.” Photo by Mark Weber — November 18, 2o16 — It was Sheila’s birthday and I was taking her out for late breakfast at our favorite neighborhood spot The Dish on 8th Avenue (between 20th & 21st Streets) afterwhich, we walked over to the Apple store so she could buy a cord — In 1952 when Sheila left Detroit for New York City she and her Detroit friends Jenny King nee Devries, and Virginia Cox, all lived in an apartment in Gramercy Park (neighborhood on Manhattan at 21st Street and Lexington) —- Over her kitchen sink she has a poster print of a tremendous painting by Bob Moses titled something like “The Expanded Moment” or “The Expanded Musical Moment” — it might have been from a gallery exhibit Bob was having. 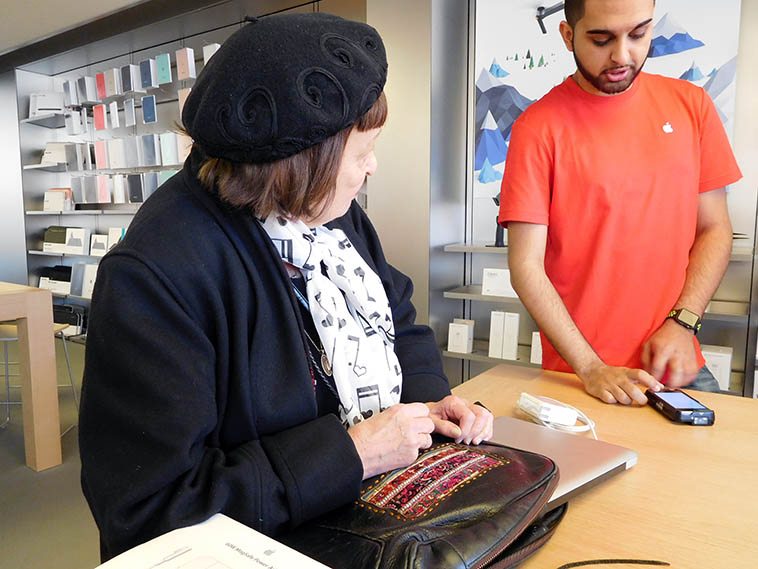 Sheila Jordan with sales clerk at Apple store where she was buying a patch cord for her laptop — the clerk was all ready to take her credit card and run it through his phone thing when she pulled out cash, the green stuff! He looked at it surprised. Maybe he’s never seen cash before? He had to go downstairs and all over looking for a change box (she gave him a hundred dollar bill) — We stood around and admired the glass stair case — November 18, 2o16 NYC — photo by Mark Weber — I told Sheila I’m still trying to figure out this little shirt pocket digital camera and tell me if I’m being a pest snapping pictures and she said, “There’s a lot to take pictures of, I totally understand!” 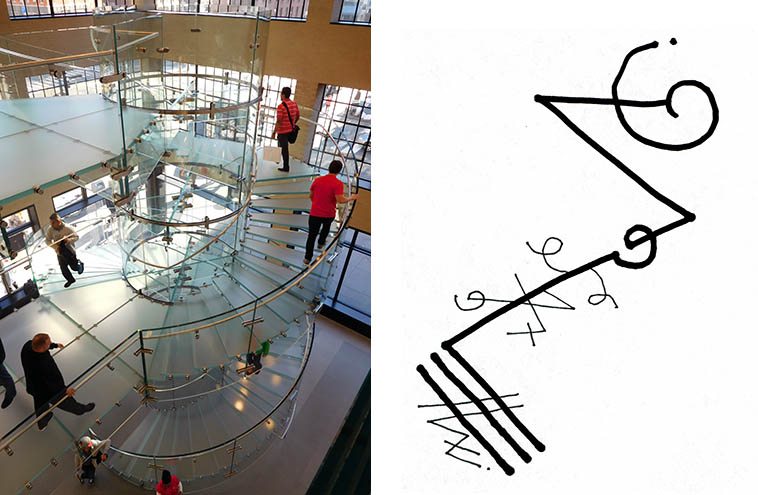 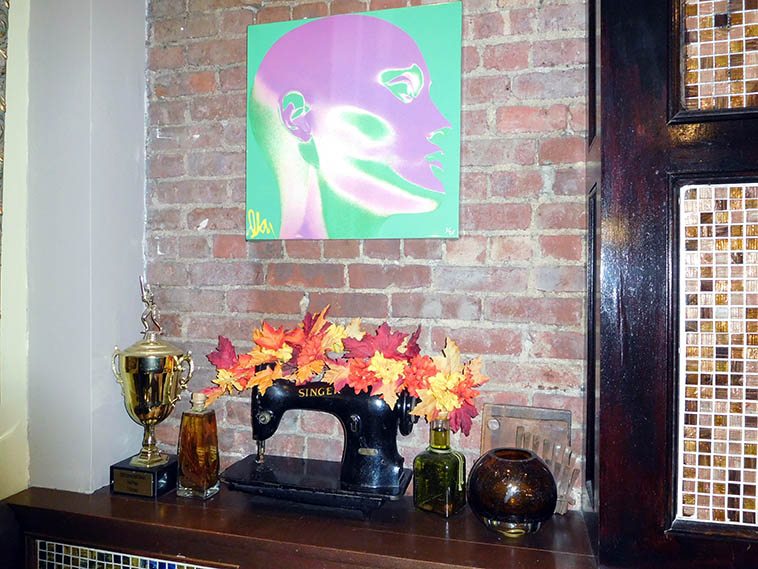 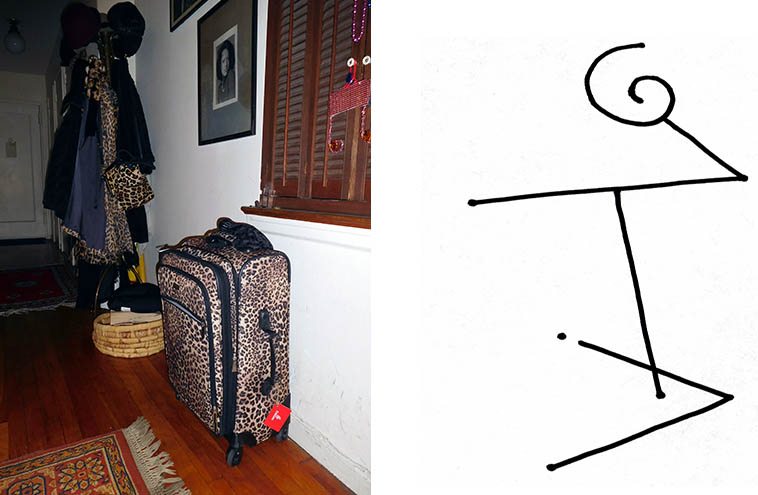 Sheila’s luggage ensemble ready to go — November 18, 2o16 NYC — digital photo by Mark Weber — She’s coming soon to New Mexico for gigs: Thursday March 23, 2o17 at Outpost Performance Space, Albuquerque; Friday March 24 at Harwood Museum in Taos; and Saturday March 25 at Unitarian Universalist Congregation in Santa Fe, with her quartet of Darek Oles (bass) and John Trentacosta (drums) and Alan Pasqua (piano) who plays on SJ’s 1975 album CONFIRMATION and used to live in Santa Fe and I think lives in Los Angeles these days and is bringing Darek — John is from Staten Island and lives in Santa Fe 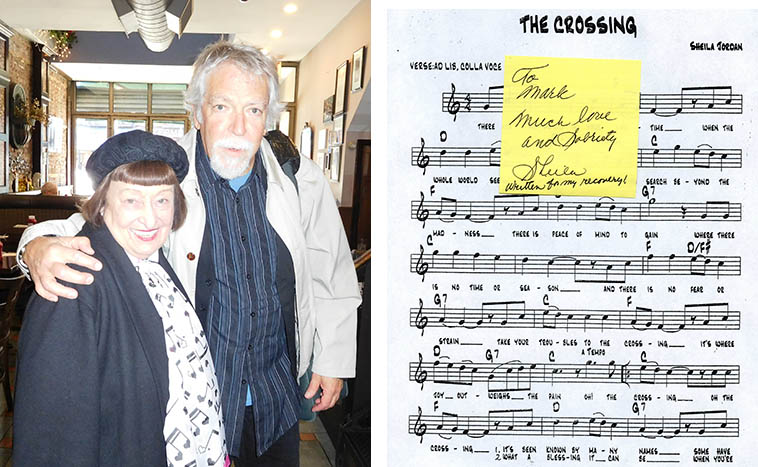 Sheila’s song plus two of the lucky ones who escaped — photo by the cashier at The Dish– November 18, 2o16 — Here’s something I wrote a couple nights ago that I didn’t know was a poem about someone searching for recovery until it finished writing itself . . . .

I wouldn’t call it that
turned around such as it was
inverted
contrary
windswept
we walked along the pier
late, under sparkling kaleidoscope sky:
the night changes many things
but this was different, like
the ocean, if you lived closer
it wouldn’t seem so illogical
tempting engagement, shoving off
away from shore, taken by currents
you know not where
you’d have to master your fear
lest you become a nervous wreck
shipwrecked among your lobster nightmares
wrapped in seaweed
teeth chattering, eyelids frozen open
huddled in the sand you couldn’t forget
endless drunk
there has to be a way out
someone please pray for me