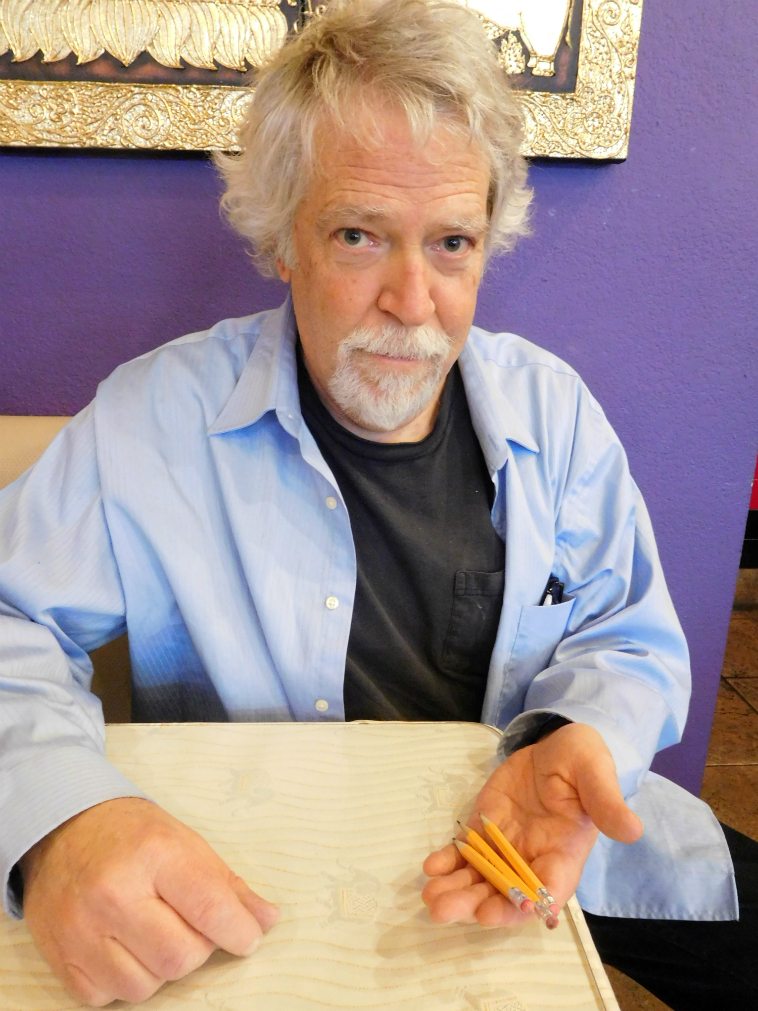 MW with the greatest writing device of all March 5, 2o17 – photo by Cal Haines

I utilize two main processes for writing poems: There’s the good old-fashioned time-honor’d Inspiration, when poems occur fully formed out of the clear blue sky. And the other is what I call constructions, a bricks & mortar method where I start with an opening phrase I call a gambit — usually an interesting phrase — and all I do is brick by brick build up the poem following the gambit’s inherent suggestions. I only started with constructions about five years ago and have found the method pleasurable. An Inspiration poem takes about 3-5 minutes, maybe less, to write. A construction can take as long as an hour or more (even though, when working on it, it only feels like about ten minutes).

Now, these NIGHT RIDERS poems are a little bit different bird. They have elements of constructions, but I’m letting them write themselves with only minimal control by the overt rational mind. They seem to be subconscious in their logic, they took about 20 or 60 minutes to write, as I go slow, as I do pause between phrases to feel and sense imagery and direction and ponder what words are needed — sometimes the immediate logic seems skewed and only when the poem continues to unfold does the logic of those odd turns become reasonable. Working in pencil. There are no revisions. I wonder how they come out logical when they are finished? It must have something to do with the subconscious mind conforming to the primary world’s way of doing things.

I probably should have open’d up this essay with the sentence: It is impossible to write “subconsciously.” Words occupy another part of the brain like the way a tool chest occupies a shelf in the garage, or the way a virus occupies the brain. (The more I think about it, I think jazz is the only art form that can actually circumnavigate the conscious mind.) But, let’s talk about Word Virus.

Symbolic language first came into being around 100,000 years ago. The use of decorative beads found in a cave on the north African Atlantic coast shows that one thing can mean another thing. Metaphor. Words followed shortly thereafter, so that by the time Homo Sapiens traveled out of Africa at 50,000 BC spoken language was already in place. Words moved in and took over. Before words we thought in images and intuitions. (Julian Jaynes believes this happened around 3,000 BC but if he were alive today and with the genome project he’d realize that date is very flimsy.) (He also thought before words we all operated with an interior “voice of God” — which shows even geniuses can be cracked.) I’ve thought about Word Virus ever since W.S. Burroughs put the idea in my head, and he got his initial ideas from Jaynes’ magnificent (and long-winded) book THE ORIGIN OF CONSCIOUSNESS IN THE BREAKDOWN OF THE BICAMERAL MIND which I read in 1981 and have never forgotten. (I don’t recommend you read this book, the Wikipedia citation is much better and more concise.) My thoughts on the subject came into deeper focus once I started a meditation practice about seven or eight years ago. The rampant words in the brain are what the Buddhists call monkey mind. So, words are to be regarded with suspicion. I won’t go as far as to propose that evil beings from outer space implanted Word Virus in our brains but something like that happen’d. There was a trigger that had the homo line of hominids make huge jumps very fast. And words just rode that train. It can also be argued that words helped move things along as we were able to organize abstract thoughts and convey them, I’m all for that. Words are fun. But, words are dangerous.

Those were the first beads by the way.

I let these poems coalesce in a quasi-subconscious way, sort of a drowsy half-awake sort of way. Usually I had been reading in bed and a little nudge of a phrase rose to the surface and I’d sit up and jot down a few lines and just let it flow slowly. It occurs to me that this is sort of what Salvador Dali was on about in his “paranoiac-critical method,” which doesn’t mean he was fearful that other forces were spying on him but that something else was controlling the images, and that various seemingly ridiculous associations between things somehow can be made to appear rational simply because that is what the brain does (now THAT will make anyone paranoid). The brain organizes and in critical mode while directing these delirious phenomenon the very weird starts to makes sense. You could toss in Jung’s ideas of synchronicity as well, in that, meaningful coincidences otherwise unconnected reveal a parallel relationship.

I also need to say, that the more I’ve practiced writing I’ve grown far away from much of the modernism that prevailed in the 20th century. I love all that word play but words themselves are avant garde enough just used in a straight-forward sentence. Each word is a universe of metaphor. So, I don’t go crazy with screwing around with grammar and syntax. A simple sentence is psychedelic enough for me.

I’m not sure I’d want the writing to be purely subconscious, even if achievable, it would only be word nonsense, or as my friend Todd Moore used to say about some of the language poets hereabouts: They just throw a bunch of words at the wall and see if any of them stick. 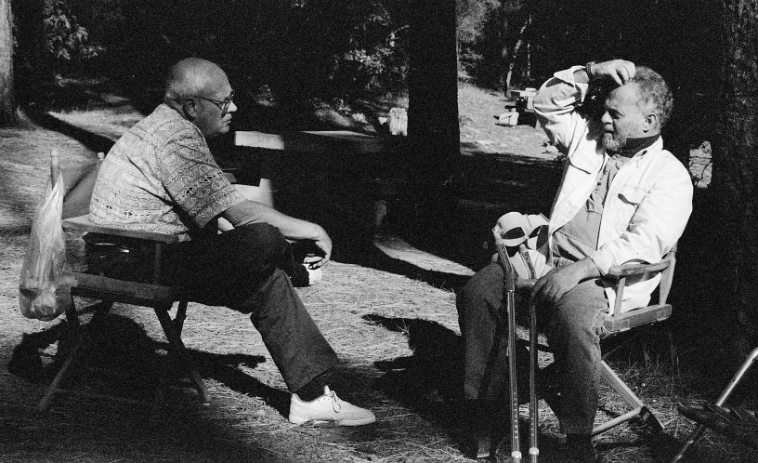 The use of the subliminal is not used in narrative poetry, a style I wrote in for years and will continue on occasion. In the narrative poem the subject is more on the surface, they’re basically stories cast as poems. And they are autobiographical and the author is usually the hero or anti-hero. I’ve been referring to them as “angst poems” for years, which is not exactly the correct designation, rather, it leads the mind into a pejorative that I’m not implying — these are day-to-day slice-of-life scenarios that the author is navigating and are really quite useful for others to see how someone else is navigating this life we all are going through. A better term might be — what was the word Connie used to describe my poetry on the blurb for my LONG DIVISION collection? quotidian.

I was first calling this collection: NIGHT POEMS, but that was just a working title which evolved into NIGHT RIDERS, possibly riffing off of Stephen Crane’s first collection of poems THE BLACK RIDER (1895).

As to the symmetry of these poems: I use the term verisimilitude to denote symmetry, uniformity, correspondence, and another term “moral logic” which is not exactly what I mean, but it means something to me. Balance. Even the incongruities are mysteriously balanced, like a counter-pose in yoga. Has nothing to do with “right” or “wrong.” Verisimilitude is the property of seeming to be true, of resembling reality.

I laughed when I proofed the galleys a few weeks after writing these poems and said to myself these are my ARIEL poems, although, I hope I do not suicide in the next few months as Sylvia Plath did after she wrote ARIEL — I’ve always thought that was a very out book. Out there. “Out” in the sense how we use that term in jazz. Outside the chord structures. Outside the harmony. Outside the melody.

Here’s proof that writing and music are produced differently: With music you can improvise freely sans the conscious mind, but in writing, that is not possible, it’s a tenuous thread as Word Virus refuses to relinquish control. I tried, I really tried. And thus, I’m having further insights into what W.S. Burroughs was on to with his cut-ups. These poems were an attempt to write outside conscious mind, even as that is not possible.

Interesting — I just now noticed that this sequence opens with a Celtic image and ends with a Celtic scenario/image. Purely unplanned. These poems are published in the actual sequence that they occurred, and there were a few more after February 20 but the source was fizzling out, and evaporated. They were not written with publishing in mind, that would have interfered with the machinery.

These are definitely winter poems. I wonder, also, if these poems should only be read at night? 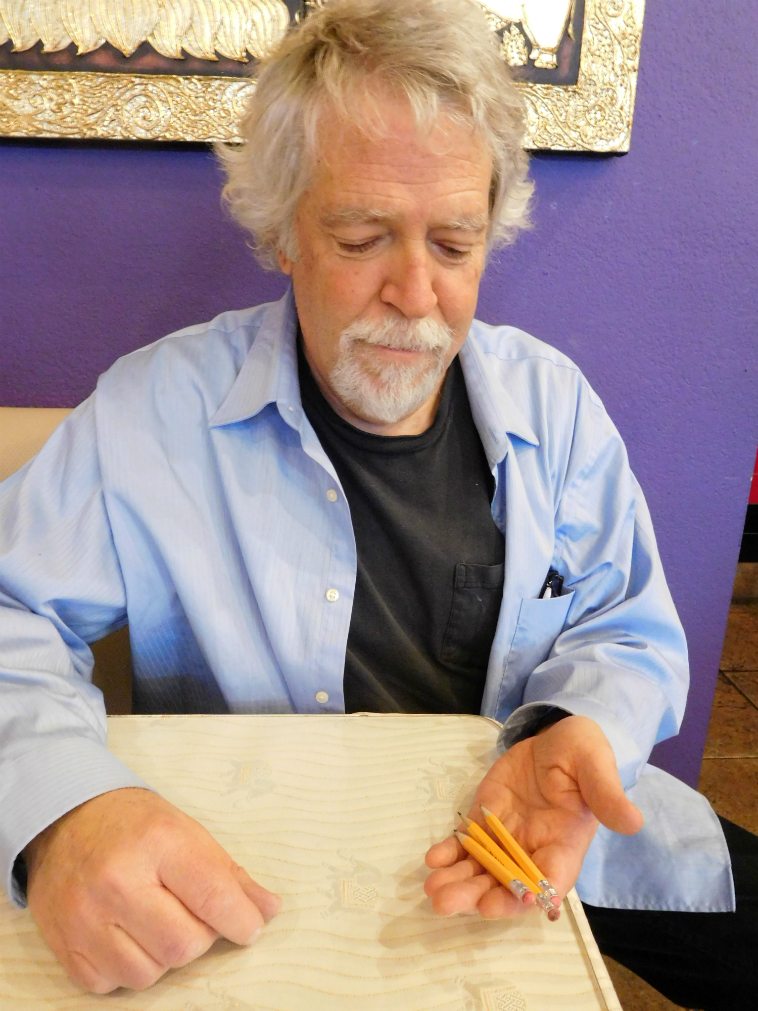 MW with the greatest writing device of all March 5, 2o17 – photo by Cal Haines