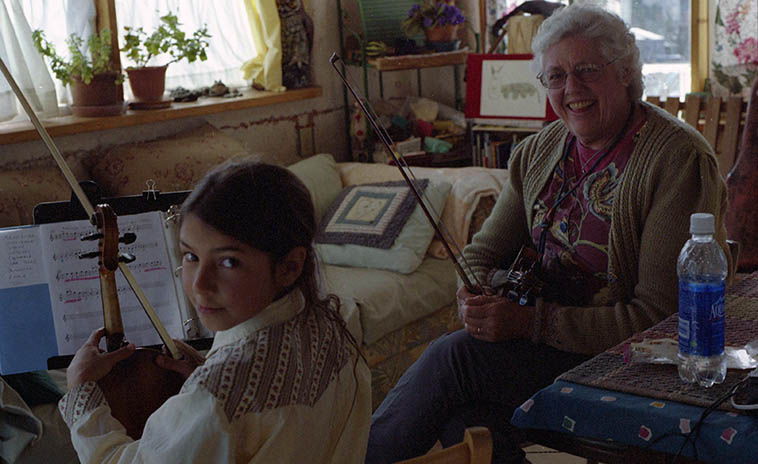 This story is so sad I can barely stand to think about it —- This child was wholly determined to become a jazz player — Her middle name was Jazz, fercrissakes, it was ordained! Altho, spelled with only one Z ——— Ella Jaz Kirk at her weekly lesson with Jeanie McLerie at Fiddle Hill, Silver City, New Mexico — February 5, 2008 — photo by Mark Weber —- She died in a small plane accident on May 23, 2o14 when strong winds interrupted the intended flight to head over the Gila National Forest where she and another student were to monitor the recent fires there in the forest, besides music she was very involved in conservation issues (having more soul than our current President)

Obviously, there wasn’t any great division in the music between blues and jazz —— it later divided into distinct styles, and/or was marketed as distinct. The 3-phrase song form of the blues probably grew out of field hollers. And what are field hollers? Call and response:

And the field hollers were a mix themselves with no division: something of a prayer, a salutation, a dance, a crib song, anything, a coded love lament, a bit of news, an exaltation, joy, rapture, bliss, announcement of a new child, anything —————– The bluesman merely carried on with his piano or guitar these songs, like a reminder, a ghost, the anima carried over from Africa —————– And then from there, instrumental groups, in what became “jazz” echoed these 3-phrase songs and used them to improvise upon, illustrating how much music is really simple, but profound, even glorious, just romping. 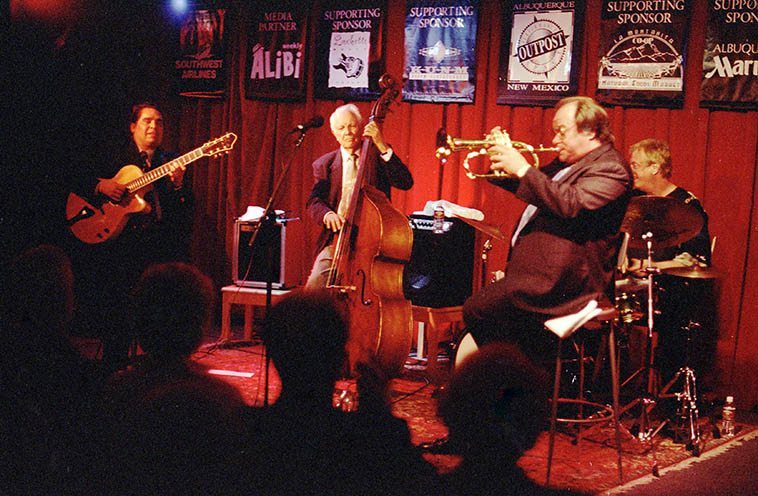 Bob Haggart Quartet — May 4, 1998 — Outpost Performance Space, Albuquerque —- Bob on bass; Butch Miles, who lived in Albuquerque at the time, on drums; Warren Vache (cornet & flugel); Howard Alden on 7-string Benedetto guitar, of which I seem to recall he told me it was on loan from Bucky? George Van Eps? I can’t remember exactly, but he was trying it out, I remember that —– I got to pick them up at the hotel to drive to the gig and with Bob in the front seat I asked (I have a devil in my soul) Hey are you going to play “Big Noise from Winnetka”? and Bob said, “Oh, Mark, you don’t want to hear that do you?” and I said Sure I do —- Well, they played it, and amazing best version I’ve ever heard —- “Big Noise from Winnetka” is a novelty ditty that Bob recorded with the Bob Crosby Bobcats in 1938 in duet with drummer Ray Bauduc, and I gather it’s been an albatross around Haggart’s neck ever since — when they played it, Butch came over and played Bauduc’s part on Haggarts strings and Warren played the whistling part on cornet (I imagine you could find it on YouTube) ——- Here’s a trivia NOTE: David Parlato once played “Big Noise” on Lawrence Welk television show with his father, who was long-time trumpeter for that great band, and with his brother Chris hammering on the bass strings with his drum sticks — I have it on VHS, it was a Lawrence Welk show where he invited the orchestra’s family members to perform, circa 1970, David had that beard you see on Warne Marsh’s album NE PLUS ULTRA 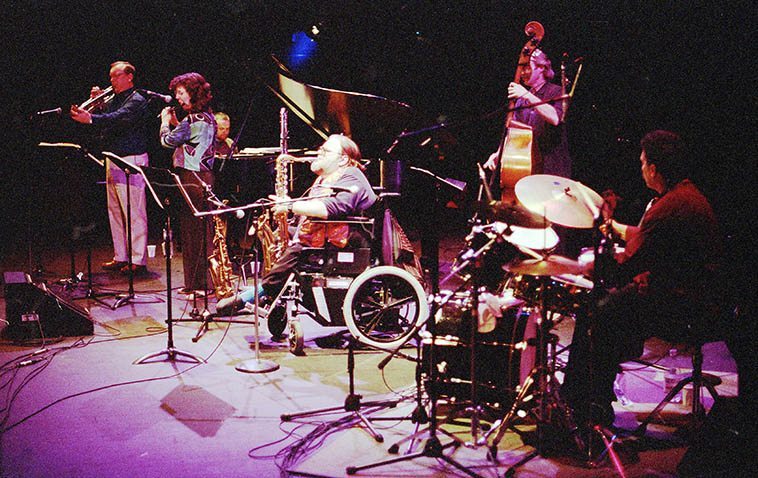 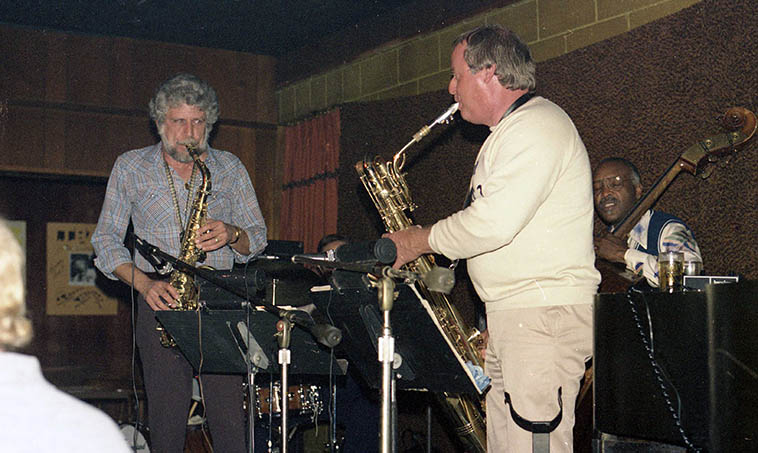 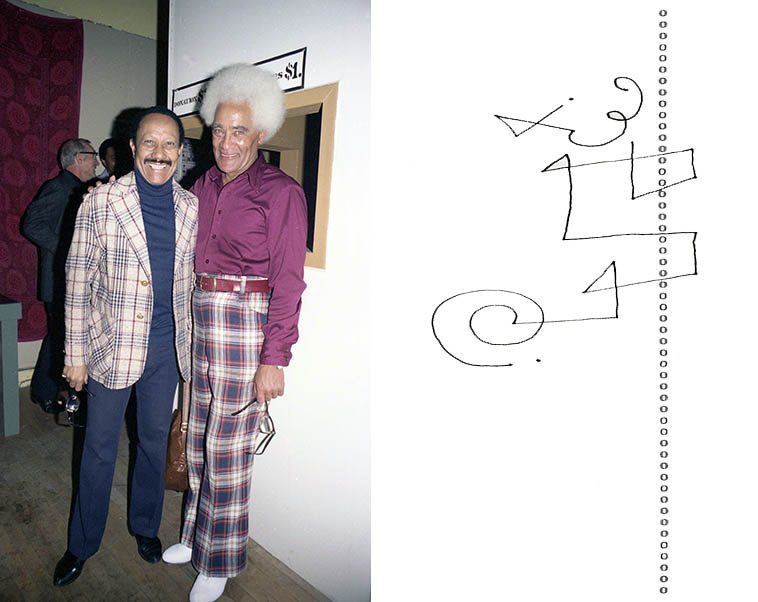 Two dancers: Fayard Nicholas & Foster Johnson at a recital for Foster’s dance studio — October 13, 1980 at Pasadena Film Forum (in conjunction with my first photo exhibit, curated by Terry Cannon) — photo & line drawing by Mark Weber ——— Who’s to know about dreams —- My waking dream the other day was Fayard Nicholas calling me on the telephone and we talked minimally, outside the formalities and saying Hi, great to hear from you and how are you doing? He didn’t talk hardly at all and there were long silences with no words, just quiet —- He was elderly in this dream, I wonder’d if he was still alive and this dream was a portends that I should call him even though I really didn’t know him, it was Foster who had introduced me and I used to bump into Foster all over town (Foster was the proprietor of the renowned Finale Club in L.A. in the early 50s where Bird played) —- I ruminated on this dream on how older folks become quiet and our relationship with them is to abide in the quiet, I got out of bed and looked Fayard up and he had passed on in 2006, age 91, in Los Angeles —- You’ve no doubt seen his dancing in movies like the amazing mind-blowing routines in Stormy Weather (1943) with his brother Harold as the Nicholas Brothers 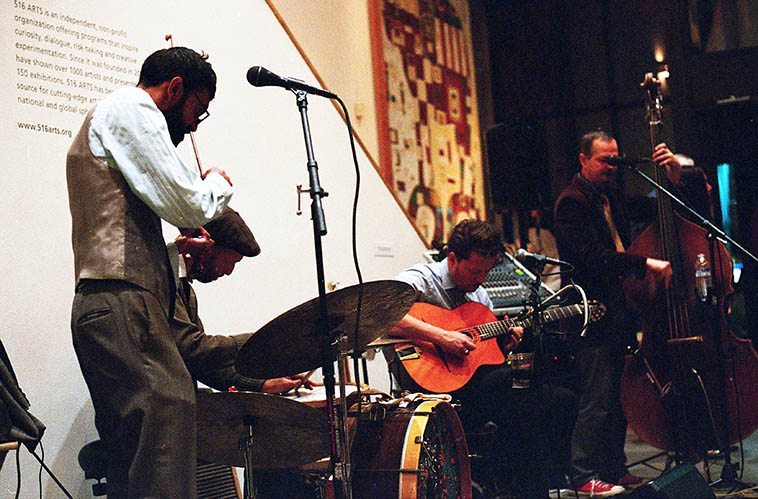 Every town has a Django gypsy band these days and Albuquerque has an exceptional one in Le Chat Lunatique: Muni Kulasignhe(violin), John Sandlin(guitar), Jared Putnam(bass), Fernando Garavito (drums) — photo by Mark Weber — Here they are knocking it out of the park for a gallery opening at 516 Arts, Albuquerque — October 15, 2o16 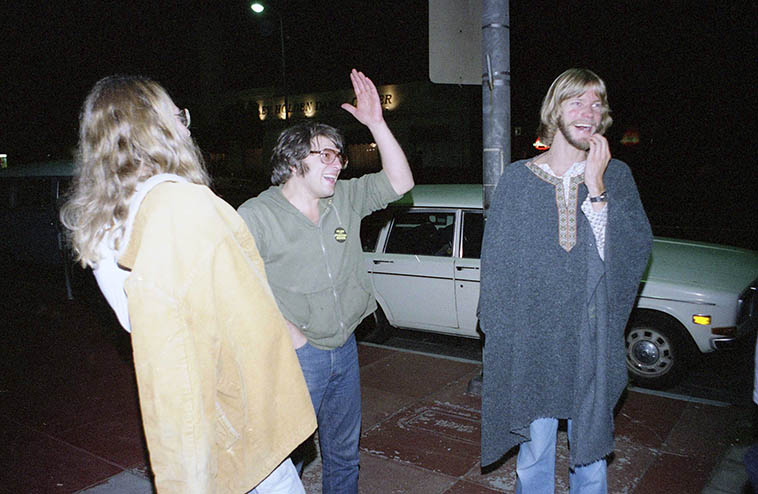 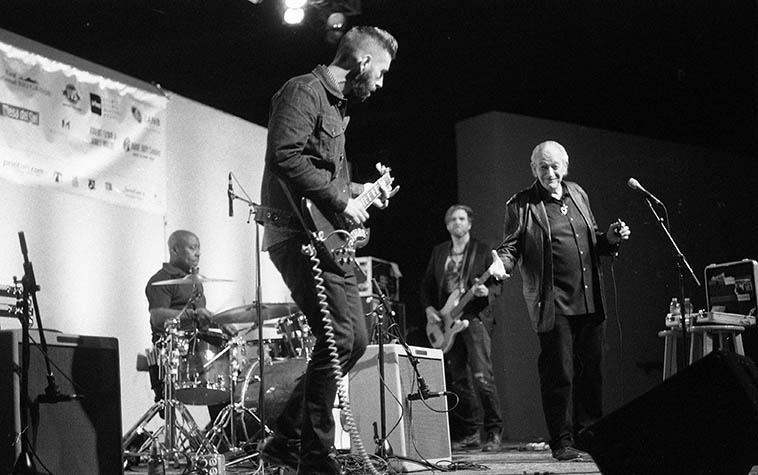 Charlie looked at me with my camera and then struck a pose, great guy that he is —- and one of my favorite bluesmen and purely distinctive sound on the harp: Charlie Musselwhite Blues Band: June Core(drums), Matthew Stubbs(guitar), Jesse Ingalls(bass) at Albuquerque Museum Amphitheater — May 22, 2o15 — photo by Mark Weber 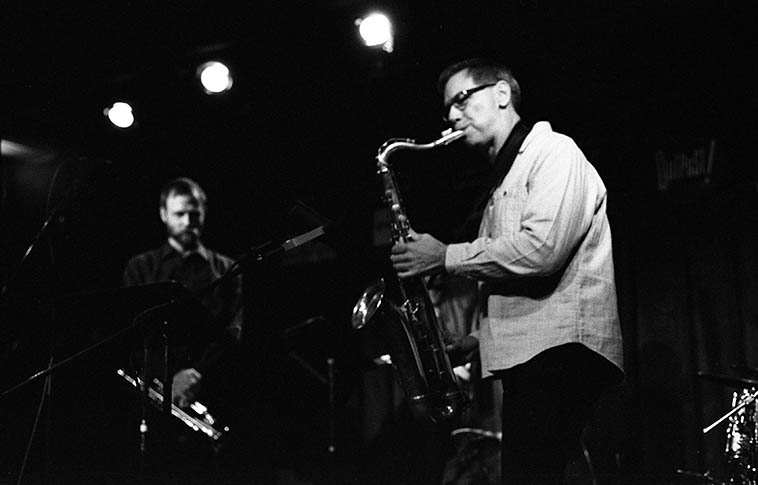 Kanoa Kaluhiwa, the great tenor saxophonist of New Mexico, as a member of JQ Whitcomb’s Five Below — March 9, 2o17 Outpost Performance Space — photo by Mark Weber (JQ on trumpet) — JQ grew up in Albuquerque and visits often from NYC where he’s enrolled at Juliard 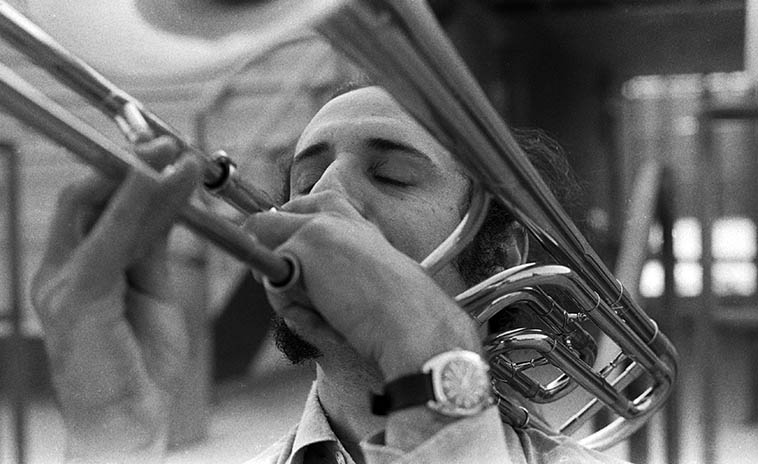 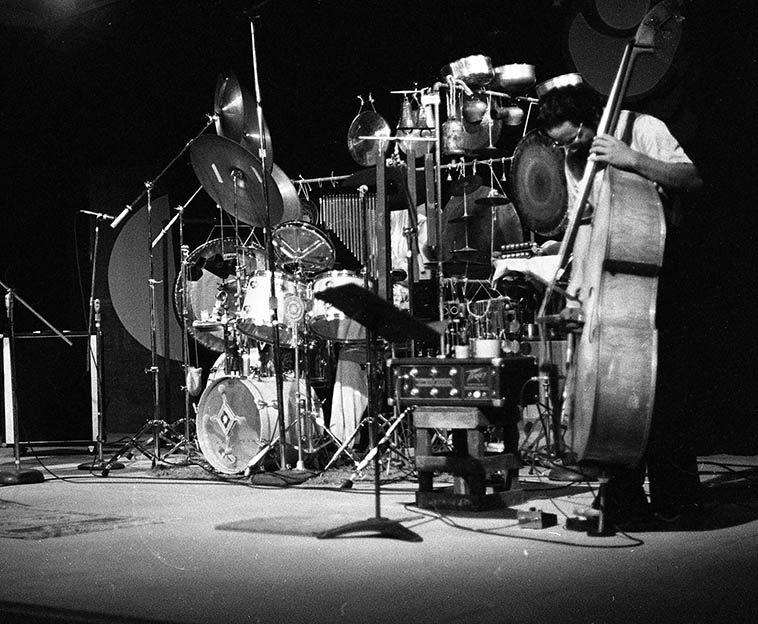 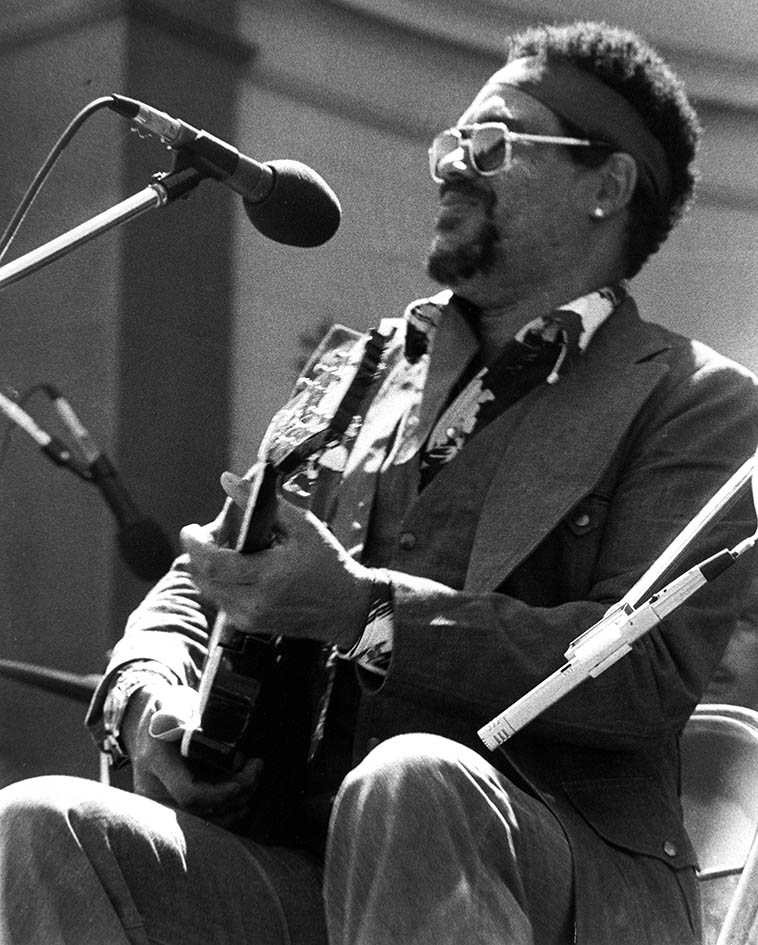 Louisiana Red at San Francisco Blues Festival —- August 13, 1980 — photo by Mark Weber —- I’m still looking for a record by this fireball that matches the performance he put on this day in San Francisco, he was blazing so hard that at one point he tossed the guitar up in the air it got so hot, caught it, didn’t miss a beat, tore it all up 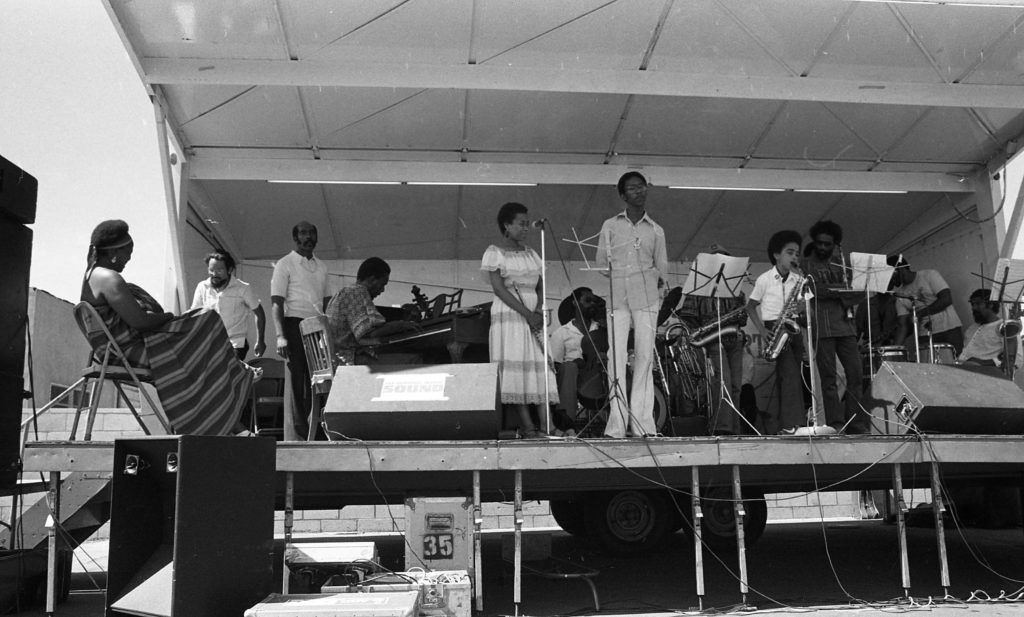 Zeke Cooper soloing on alto saxophone with the Pan Afrikan Peoples Arkestra at Watts Towers Jazz Festival — July 7, 1979 — photo by Mark Weber —- Horace Tapscott seemed to know every musician in the community and was always encouraging the youngsters —– I wonder where Zeke is today? I see on stage Linda Hill (sitting behind Horace on piano), Roberto Miranda just behind Horace, also, and that’s Adele Sebastian on flute . . . . . 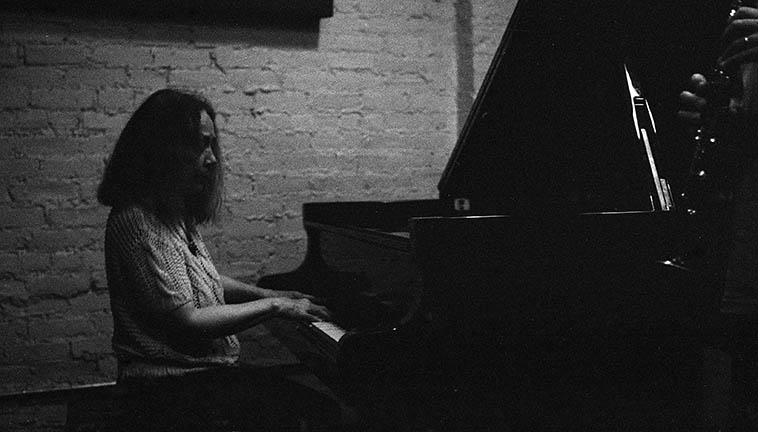 Connie Crothers (Bill Payne on clarinet) duet — May 11, 2015 NYC — photo by Mark Weber —- Max Roach once nominated Connie for a MacArthur genius award, she sure could have used the money