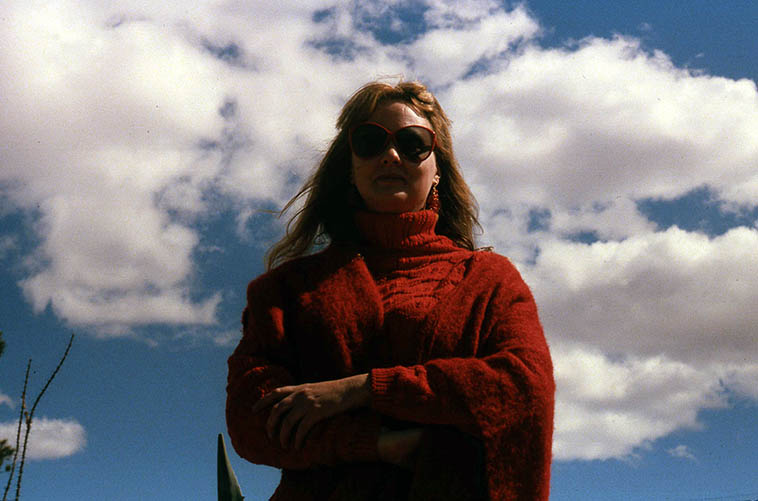 Belinda Subraman, one of America’s great poets — February 21, 1993 El Paso, Texas —– Belinda was publisher of GYPSY magazine for years, where I first became acquainted, she was very nurturing to my early publishing efforts ———- Ben Gulyas (another poet of extreme sensibilities out of Cleveland, Ohio) were down in El Paso for a drunken reading and even spent a day over in Juarez where I found out Belinda is a lightweight in the drinking department (no shame in that, I had to give it up myself, eventually) —- I don’t generally go for Woody Allen movies (too neurotic) but one night at Belinda’s we watched his What’s Up Tiger Lily? and Belinda and I about died we laughed so much and I had a bottle of that delicious burnished Mexican brandy El Presidente, yum (I kept Belinda away from it) — Mr Allen’s genius was to find some B-Japanese movie or maybe a C and use it to add his own dialogue, gawd, we were rolling on the floor with tears rolling down our faces ——— Then, another glorious day Belinda took us to meet the legendary southwest R&B jazz saxophonist Art Lewis, and I played wobbly piano for him and he played saxophone, at his studio in El Paso, thems were the days . . . .

THE NARRATIVE AND THE UMBRELLAS
Inasmuch as I
will never
fall into the trap of defining my radio show
Something about it occurs to me —-
I’ve been reading a lot of Joan Didion lately and she’s
forever concerned about “narrative”
ie. the received wisdom about ourselves
and the stories we tell ourselves to bolster our history
She’s skeptical about much of it and favors skewering it whenever possible
I realize that my approach to radio is all about narrative
That, honestly, it’s my vision of the history (my show is never a hodge podge
of odds & ends strung together like jazz wallpaper) there’s always
a story line —-
Is it revisionist history?
Probably.
Is it no less true?
I can say this: It is not untrue.
Is it fiction?
Could be.
Is it merely the narrative as I see it?
Yes.
I have lived long enough to have seen several different narratives about jazz:
Foundational myths, ie. jazz came up the Mississippi River from New Orleans
(but if that were so how come there’s no early jazz in Minnesota? Contrary
to popular belief the Mississippi does not rise in Chicago)
Or, that avant-garde jazz subsumed everything in its path and
is therefore more advanced —- And this one:
West Coast jazz is a tepid watered-down version of the real thing that
is happening in New York City,
and so forth . . . . .
What am I trying to say?  It’s that
I can see how my narrative is merely only that: My view
and it’s very romanticized, hopelessly 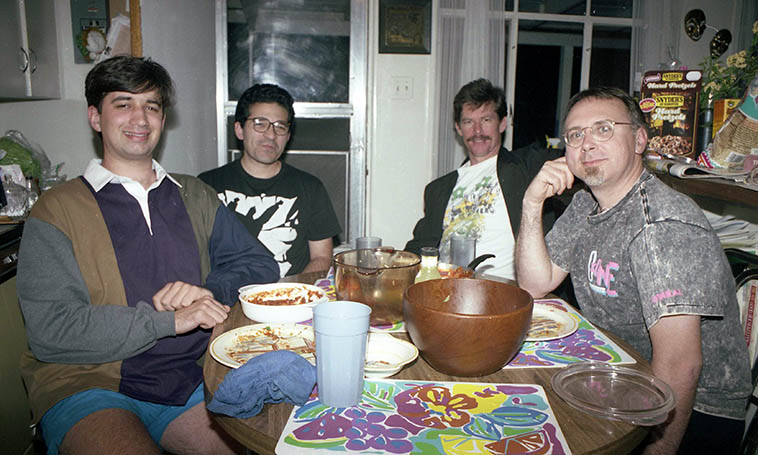 The Michael Vlatkovich Quartet on tour sit down for one of Janet’s meals — May 7, 1992 — photo by Mark Weber —— Left to Right: Anders Swanson(bass), Chris Garcia(drums), Bill Plake(tenor), Michael(trombone) —- What a great band 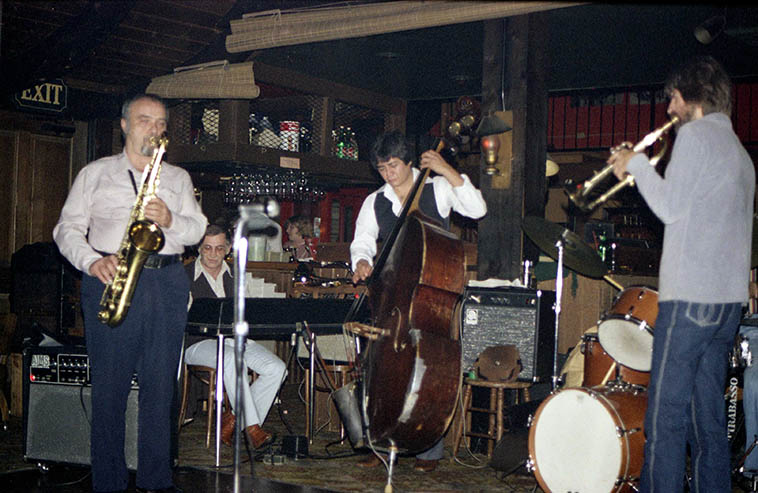 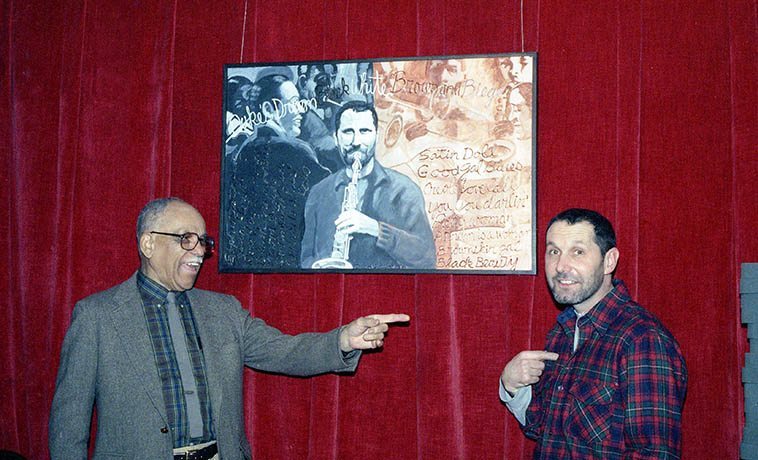 Reggie Gammon and Tom Guralnick at Reggie’s show at Inpost Art gallery at old Outpost, Albuquerque — December 5, 1997 — photo by Mark Weber — “Duke’s Dream: Black, White, Brown & Beige” Reggie Gammon (1921-2005) spent the most part of his life in NYC and as a member of the Spiral collective that included Romare Beardon —- Reggie fell into Albuquerque 1992 when so many of us were moving here, and kept a studio at Harwood where he listen’d to the Thursday jazz show while he painted ( ! ) He called me once on the show and said, “Mark, I love you!” and I went, uh, er, uhm, gulp, well, “I love you, too, Reggie” took me a minute to gain my flooring . . . . . I think I had just said something about how much Black American Culture has brought to the table in America —- Reggie has a show of his prints presently at Outpost Performance Space 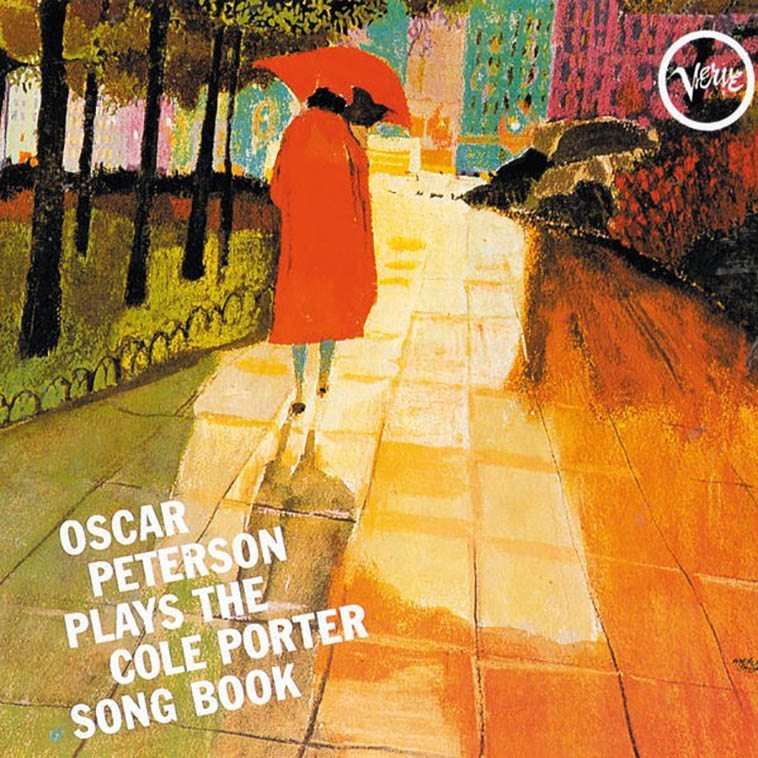 Oscar Peterson album cover art by Merle Shore. Joan Didion probably wouldn’t talk to me because I have never read Henry James, oh, I keep a copy of Washington Square about and have nosed around in it off & on over the years, I did read Willa Cather’s stories from Washington Square, does that count? I read his brother’s book several times The Varieties of Religious Experience, does that count? I suppose it is highly doubtful that Henry James and Edward Hopper bumped into each other on the Square, their lives didn’t overlap by much, but who doesn’t like Nighthawks at the Diner? —-

The one image that keeps with me from Cather is of discarded broken umbrellas she sees out her window blowing around Washington Square, the convention being in New York to buy a $2 umbrella from these magical people that appear out of nowhere during rainstorms like mushrooms, but they seem to have a one-time-use life span and they break —- Conversely, I still have the umbrella I bought, a good one, back in 1976 in San Francisco (when we were there to escape the smog of L.A.), I rebuilt or rather re-wired part of the mechanism and therefore it still serves, has a slip sleeve with a zipper, also good as a cane, that I might need yet someday in that capacity —–

Where I grew up you didn’t need umbrellas, I can’t recall ever being acquainted with an umbrella until I moved away, oh, it rains in Southern California, like the song insists: It never rains in Southern California, it pours, baby, it pours — cats & dogs —— But then, it never rained that much in San Francisco, either, even as one wishes for a good scouring absolution of the streets, like Portland, a good clean rain-washed city, or Vancouver, too, (Seattle’s a little grungy) ——- So, I don’t remember the occasion for buying an umbrella in San Francisco, maybe it was just too good a deal to turn away from? Even if we didn’t have that much dough those years ———-

Anyway, the idea of discarded umbrellas is foreign to me, it’s a New York thing — Janet’s sisters who live on 113th have a basket of umbrellas at their door, probably all bought from those Magical People of the Sudden Downpours, “Here, Mark, take an umbrella!” I don’t want to be bother’d, “I’ll just jump under a fruit stand if it starts,” I say, “and have an apple,” not remembering that when it starts raining in New York it never stops —- (Every two or three years I re-read Joan Didion’s masterpiece Slouching Towards Bethlehem (1968) —- Album cover (above) by Merle Shore is pure poetry, how come almost all the other art forms have more poetry than poetry itself?) 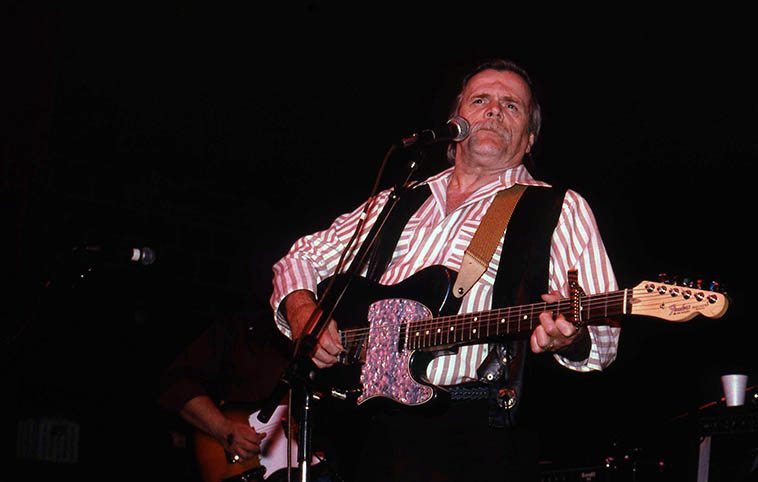 Here’s another country boy that had jazz in his soul —- I don’t even have to look up his bloodlines, I can spot another Scots-Irish a mile away: Johnny Paycheck at El Rey Theater in Albuquerque — March 3, 1993 — photo by Mark Weber 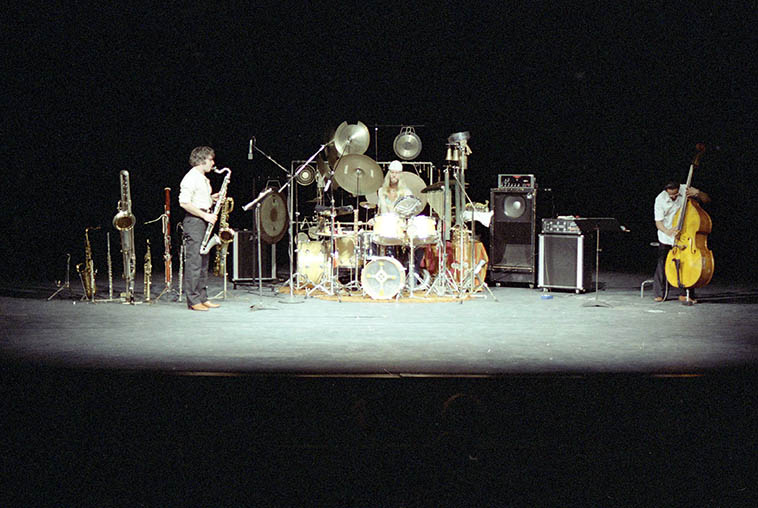 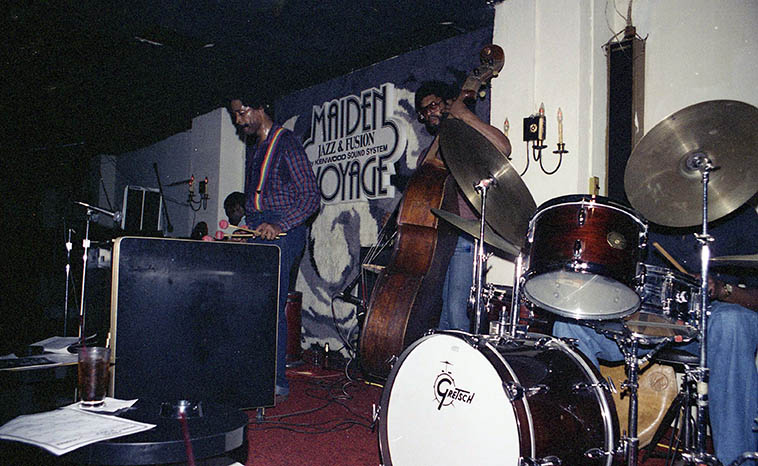 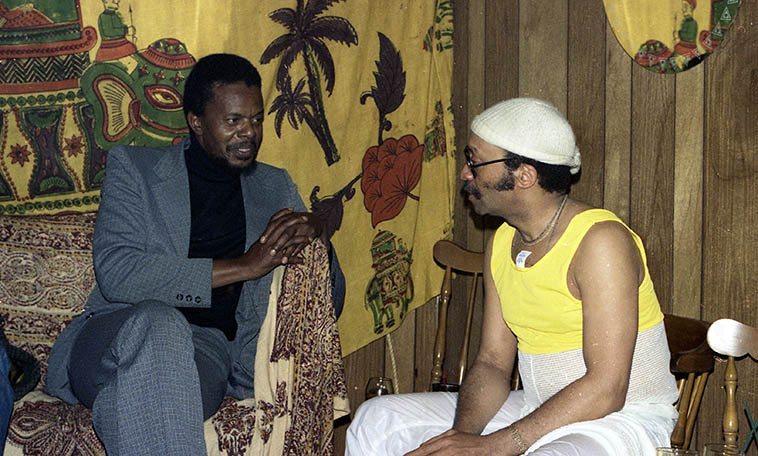 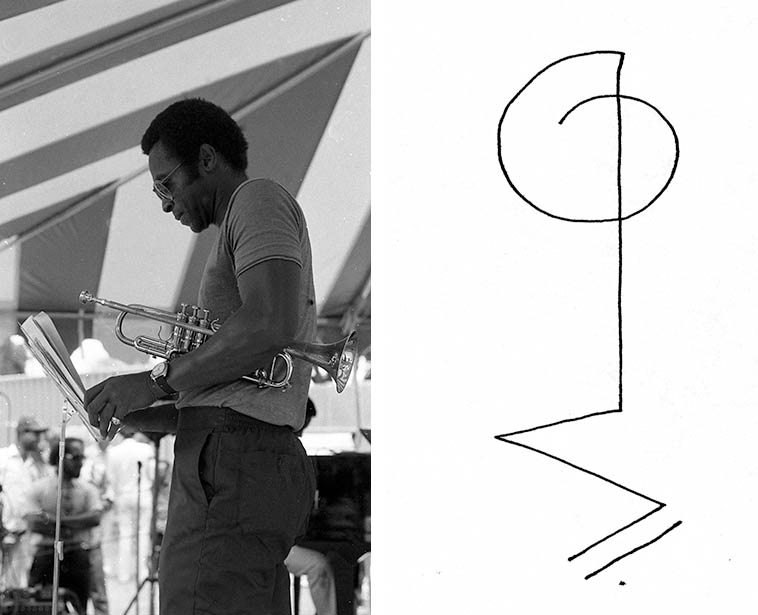 Oscar Brashear at Watts Towers Jazz Festival — July 15, 1984 — Oscar took over the trumpet chair in the Harold Land-Blue Mitchell Quintet after Blue got away from us, and I love his playing on Harold’s masterpiece album XOCIA’S DANCE (1981) we’ll have to spin a little of that this day I need to re-visit this favorite record of mine —- Actually, I stand corrected, I see where Oscar was in the Harold Land circle as early as 1971 on those Land-Bobby Hutcherson dates —- I think he was out of Chicago, then on the road with Basie 1968-1969 (I’m looking at the on-line Tom Lord Jazz Discography) then settled in Los Angeles in 1971 where he was ubiquitous on the scene all the way through the 90s —- (Blue passed away in 1979 of cancer, too much early, and Brashear did take over for Blue in the Harold Land Quintet as I caught them in this configuration many times, what a great band — Photo & line drawing by Mark Weber 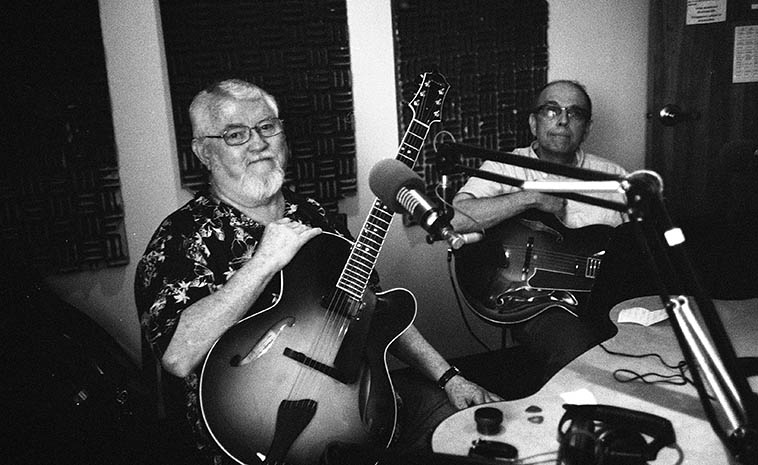 Live guitar duets on the Thursday jazz show at KUNM — July 17, 2o14 — Bill West & Vic Romanelli —- Bill has spent most of his life underwater (in the Navy, on submarines), grew up in the Tri-State area of New York —- Vic grew up on Staten Island and worked & retired from Sandia Labs here in Albuquerque, but that was just a side-line they were both caught up in, they’re heart & soul mostly guitar players of the top order —–photo by Mark Weber, disk jockey 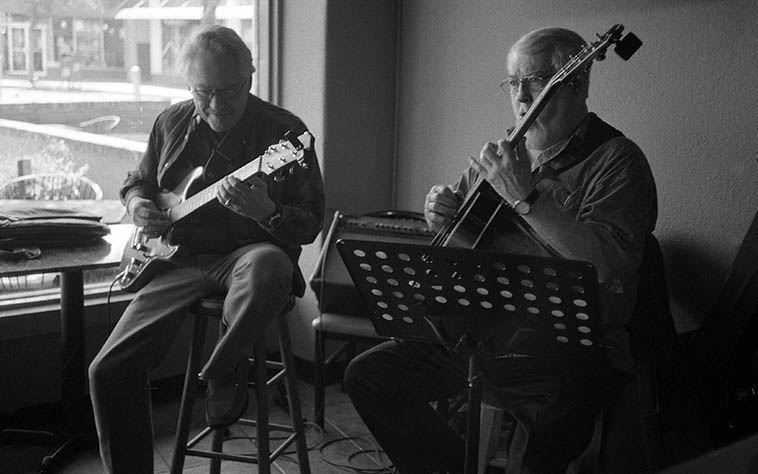 Two guitarists working a Sunday brunch gig on Nob Hill in Albuquerque: the legendary Bob Brown, who’s played around these parts since the 60s, and newcomer Bill West — club gigs are where jazz really exists, these guys are in the trenches, playing the Song Book and having a good time — photo by Mark Weber 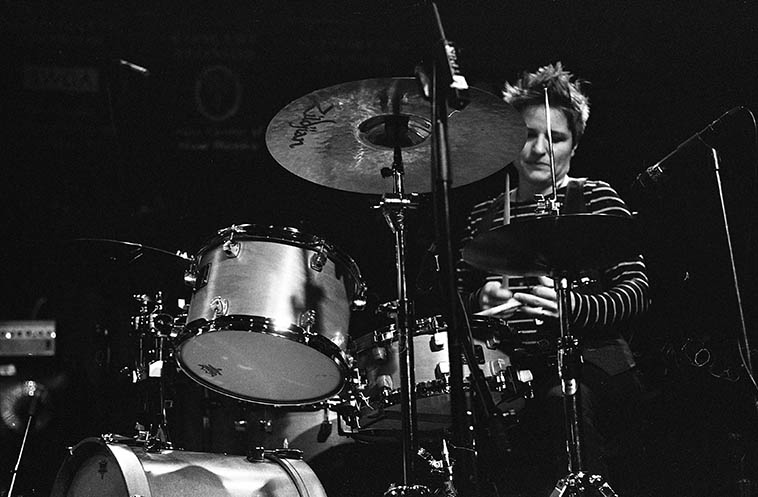