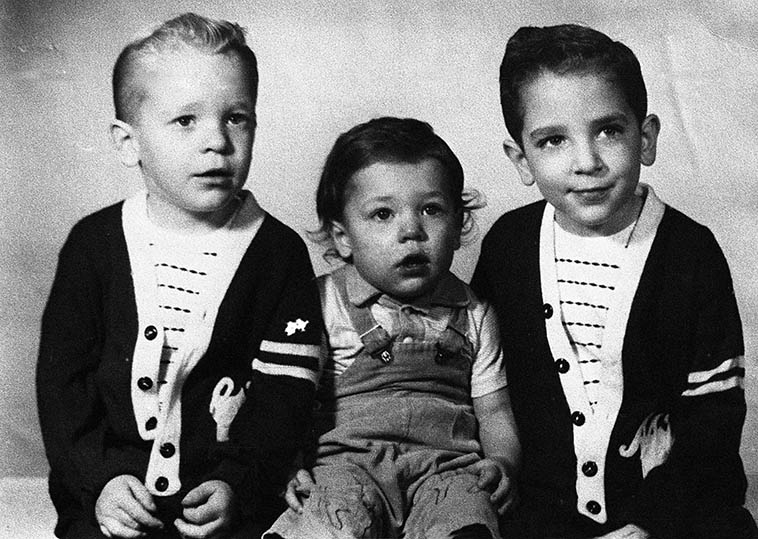 Allow me to indulge myself a minute, I just stumbled across this photo, and thought you’d get a kick out of seeing your radio host in 1956 Southern California —– that’s my two brothers, Craig is still blond to this day, and Brian barely a year old, and that’s me looking at the photographer thinking to myself I can do that . . . . .

The Rub Board Tutor

When you play the rub board your main job
is to listen so well the others hear better
telling their stories, and tell them true.
You can’t listen that well unless
you’re telling your story too.
Don’t regret a mistake, take
responsibility, make it in retrospect
an amazing possibility:
if Bunk Johnson could do that
why can’t you. If you all listen well enough
you’ll hear a story someone else tells
hey Bob that may be for you, or you think so —
playing the bells. Never mention that.
Charlie Parker did once and Leonard Feather said:
“Take this man back to Camarillo.” 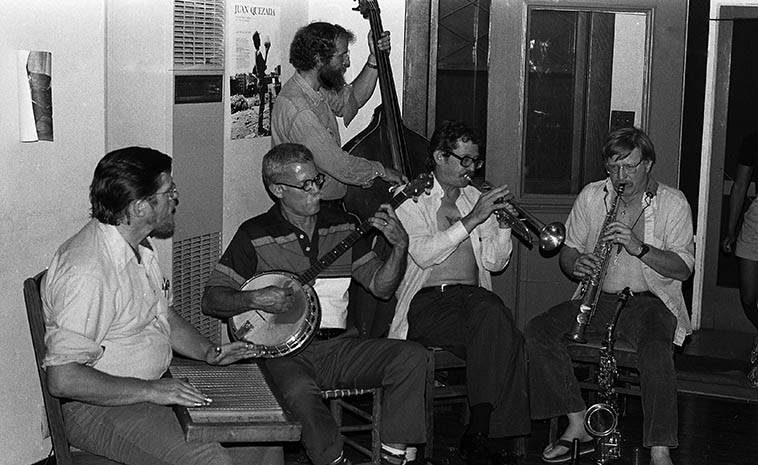 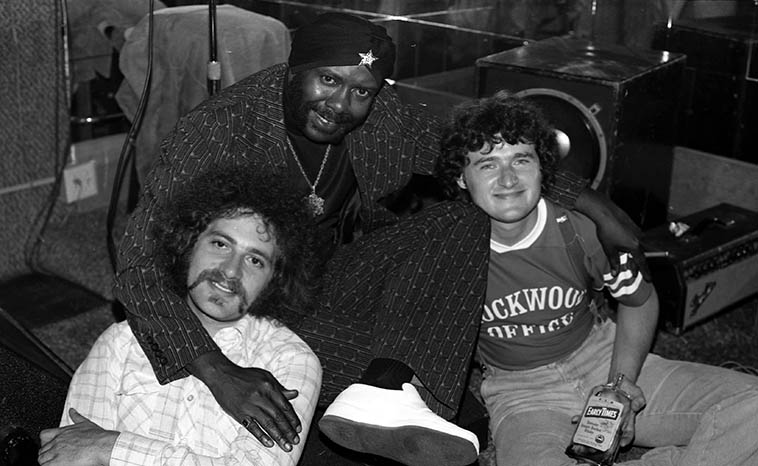 Sonny Rhodes who lived in Fresno, California, in the 60s and worked the blues clubs on the Rt.99 circuit before moving north to Oakland where I caught up with him at Gaspar’s (Fillmore & Union) in San Francisco on August 29, 1978 — photo by Mark Weber —- those are his band mates —- He had a regional hit with his 45 “Won’t Rain in California” around this time on the jukeboxes (there was a drought in California those years) 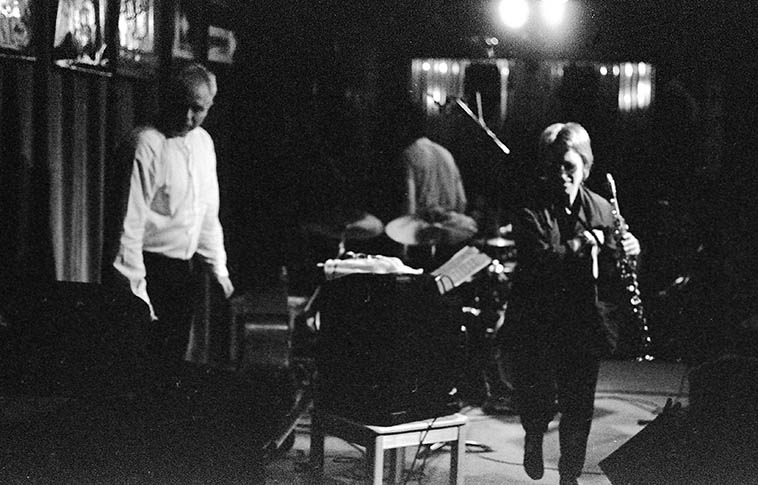 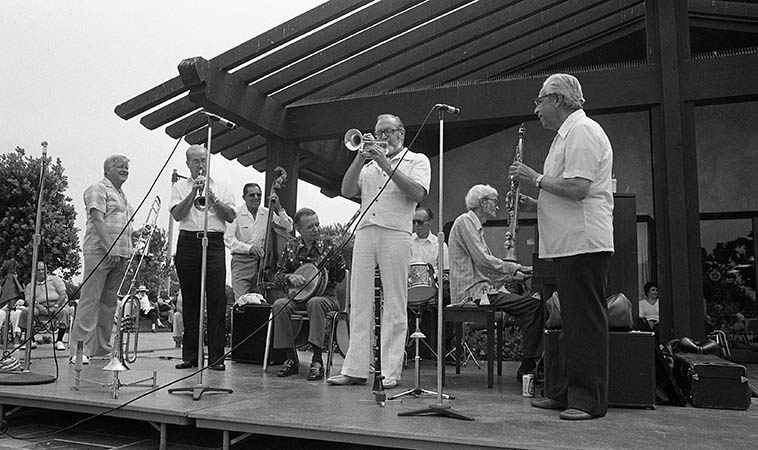 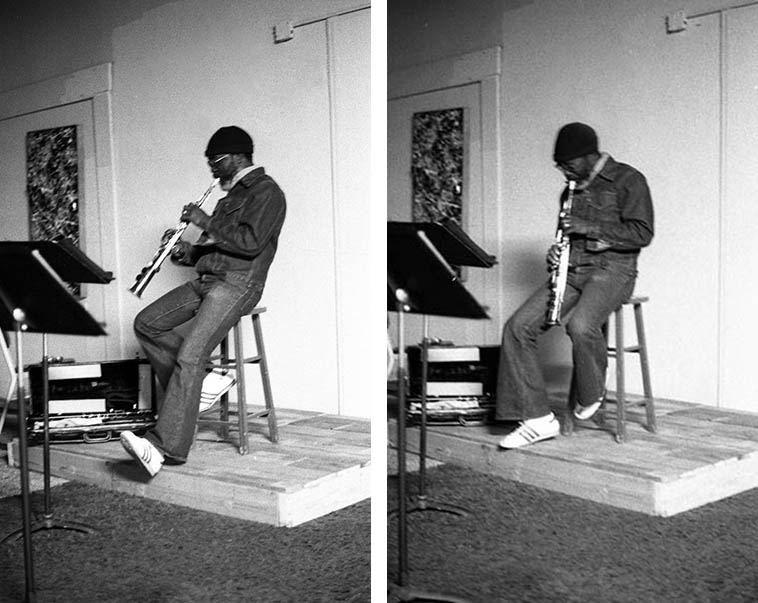 John Carter solo soprano recital at The Little Big Horn, Pasadena, California — Sunday April 17, 1977 these photos could be showing the last time John played soprano in public or anywhere —- He made the switch to total concentration on the clarinet (the photos the following Sunday show him only with clarinet) —- for five years he had been playing both soprano and clarinet equally —- He wrestled with the soprano’s well-known intonation issues, always, but that’s not why he went to clarinet —- He went to clarinet at age 48 because he felt like this was the vehicle that completely worked for his expression, saying that it took a long time to figure that out (John talks about this in my CODA interview) —- photo by Mark Weber 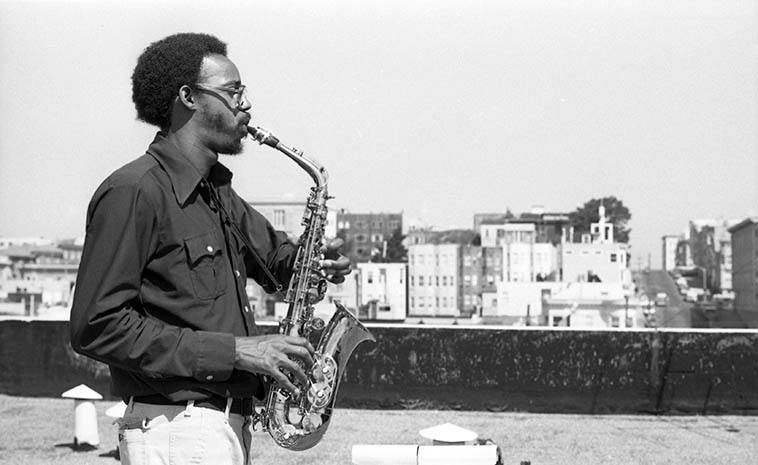 Lewis Jordan and San Francisco — on the roof of his apartment building in the Haight — September 1, 1978 (before we tripped over to KPOO) — photo by Mark Weber —– Lewis has a long-awaited new cd THIS IS WHERE I CAME IN (www.musicatlarge.org) that we will be spinning in much of the near future 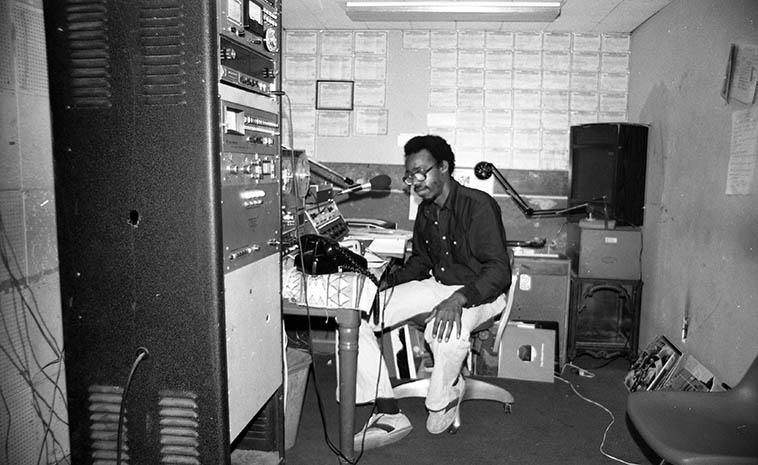 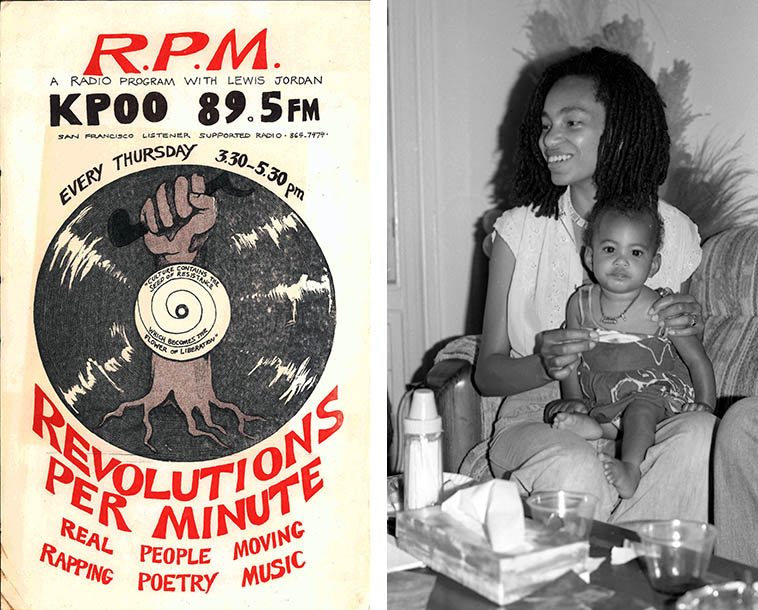 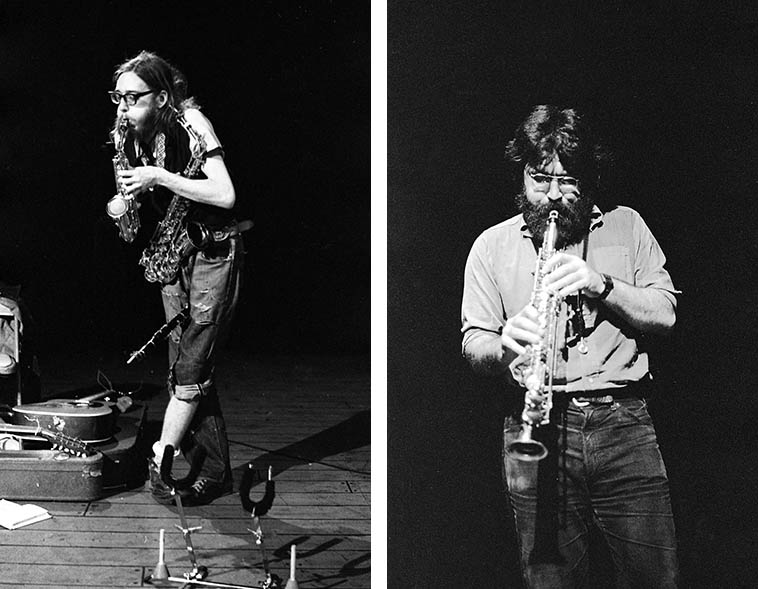 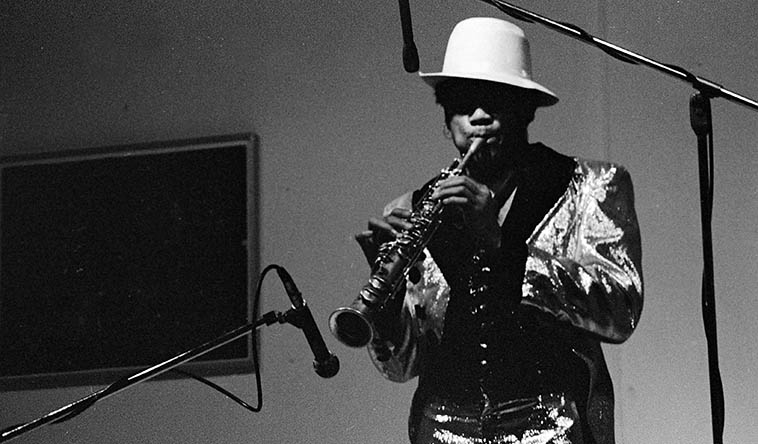 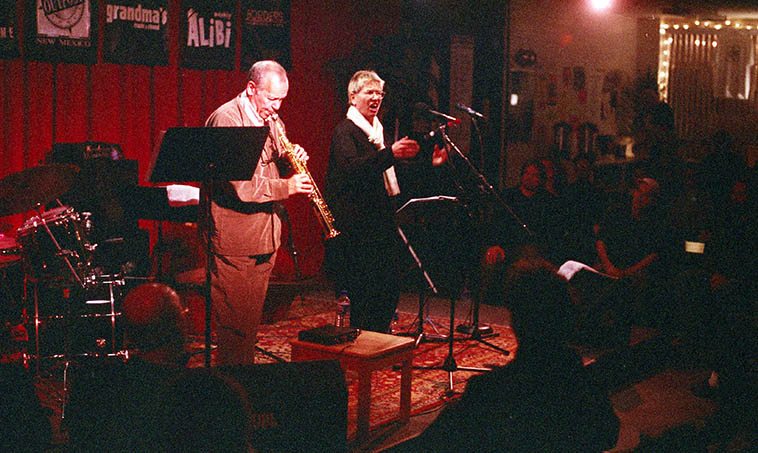 You can’t have a show about the science & art of soprano saxophone without talking about the guy who spent his entire life studying this complex and difficult instrument: STEVE LACY —- photo of Steve Lacy & Irene Aebi at Outpost Performance Space — March 20, 2000 by Mark Weber 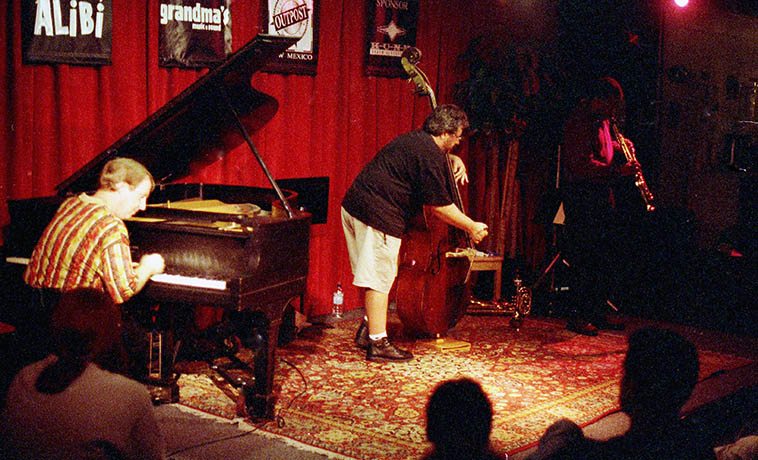 Was this a Joe McPhee Trio? I’m not sure there was a designated leader this night — That’s Michael Bisio on bass, and Paul Plimley on piano, both and all three amazing —– at old Outpost October 24, 1998 — photo by Mark Weber —- (Joe on soprano) —– Afterwards we were over here at our place and he was so touched that I had (among others) his early Hat Records LP in my collection THE WILLISAU CONCERT —- We found out that night that Joe is a cat person and has a dozen cats at home in Poughkeepsie and when he found out we had a litter of little tiny baby kittens stuck away in a closet toward the back of the house (we were all sitting in the living room) Joe started communicating with them making a high mewling cat sound with his mouth and out of the back room came all the kittens, I’ve never witnessed anything like that before — I’m still hoping against hope that the string quartet that Michael Bisio performed in with Connie Crothers, Eva Lindal, and Tomas Ulrich at The Stone, August 22, 2o14, sees the light of day (it was recorded by Ben Manley) 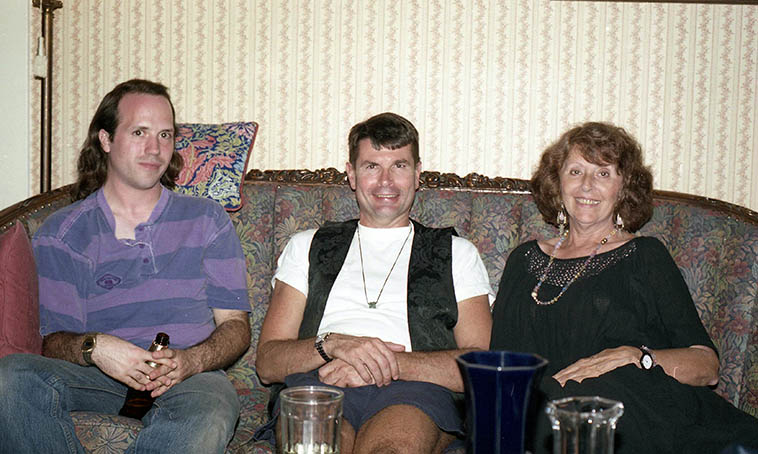 Three poets: Michael Hathaway (publisher of CHIRON literary magazine out of St Johns, Kansas), Clifton Snider, and the late dearly departed Catherine Lynn (we once published a book together) —- at a PEARL magazine publishing party at Marilyn Johnson’s house in Long Beach, California — September 18, 1993 — I haven’t seen Clifton Snyder since that day, so it will be fun to reconnect as he’s visiting New Mexico and will read his Beatle poems on the show August 17 and I’ll play jazz renditions of Beatle songs — photo by Mark Weber —- I think of Clifton as part of the English Dept faculty at Cal State University Long Beach during the years it included Gerald Locklin, Marilyn Johnson, Ray Zepeda, Charles Stetler, Charles Webb, Elliott Fried, a killer’s row of West Coast Literary Masters —- I first became acquainted with Clifton’s poetry through PEARL magazine 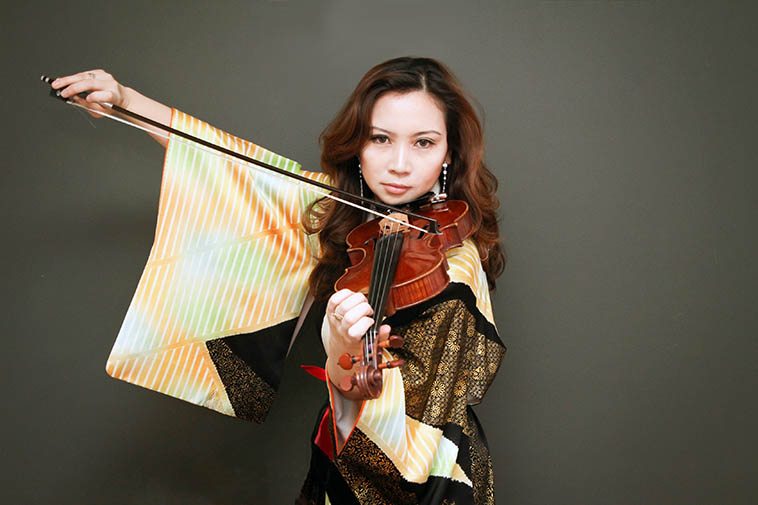 The virtuoso Meg Okura will be visiting on the show today (August 10) and she is very eloquent so I look forward to asking her about the nature of chamber music in jazz —- Meg Okura is an American violinist who was born in Tokyo (1973) and has been in NYC since at least 1992 (when she studied at Julliard) —– she is the musical director of her Pan Asian Chamber Jazz Ensemble and the music they have produced is so beautiful it defies mere words —– photo by Taka Harkness —– Maybe Meg will bring her erhu, which will  give me an excuse to tell my erhu story —- The erhu is an ancient Chinese 2-string instrument that is bowed, legend has it that the poet LiPo traveled with a troupe of erhu masters as his backup group. 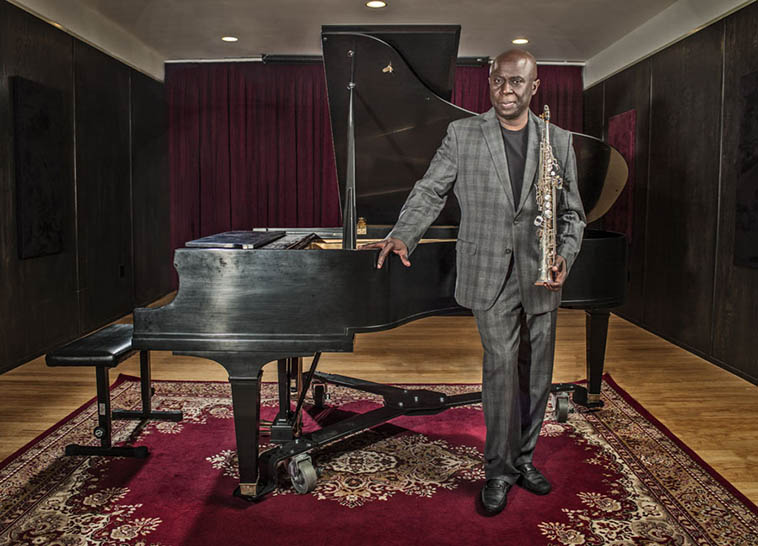 Sam Newsome is married to Meg Okura and is on staff at Long Island University, Brooklyn, in the music department, and a well-known New York soprano saxophonist ————- His latest CD release SOPRANOVILLE reveals his studies into prepared soprano (think John Cage and his prepared pianos) thus, Sam will be bringing his horns to play LIVE, always the best way to explain anything ——— We greatly look forward to his return to the KUNM studios (his previous visit to the Thursday jazz show was with Brooklyn Saxophone Quartet on April 7, 2005 w/ Fred Ho (baritone), John O’Gallagher (alto), David Bindman (tenor), Sam (soprano))—-When you get a minute, check out Sam’s intelligence at his on-line music journal (I’m not overly fond of the term “blog“). Both photos of Sam Newsome taken by Salvatore Corso — July 3, 2o17 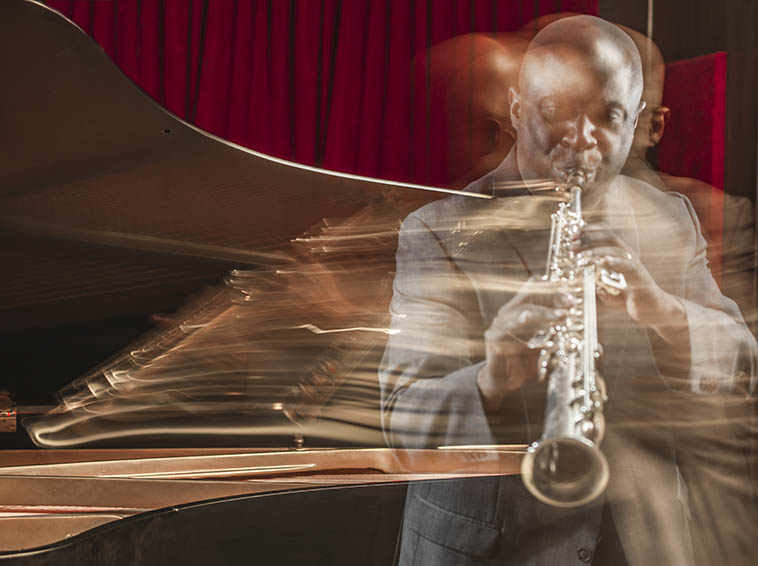