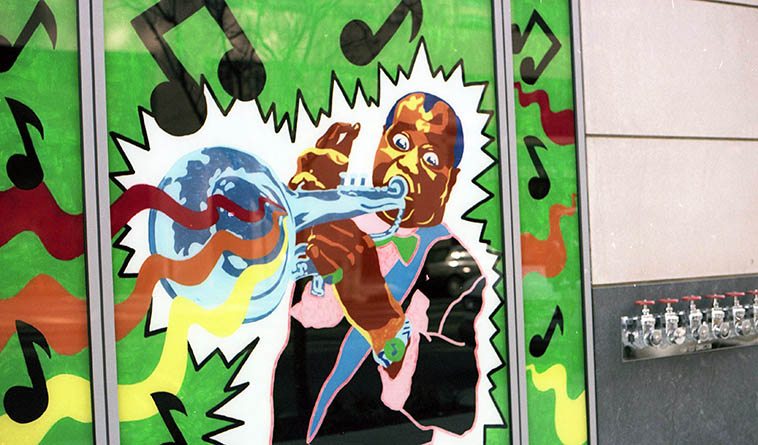 Today I will share a friend’s long grief
as we paint her mother’s house who
died four maybe five years ago maybe longer
even as
I awoke with forebodings
a cool darkness pervades my mind, why?
as the fucking noisy rooster next door bellows
his insane strangled squawk (and all for just a few
eggs does this bird come to our neighborhood)
and the cars
on the boulevard accumulate going off
to work in a roar, I read Wang Wei
who had troubles of his own living in
the noisy city, as if
neither of us will ever find peace
watching the river flow away from us
far off in the distance
and beyond that, the mountains so quiet
disappearing in cloud

Here are Wang Wei’s own words:

Migrating birds are leaving endlessly,
fall colors come to mountain after mountain.
All the way up Huazi Hill a sadness
staining every far boundary, drifts on. 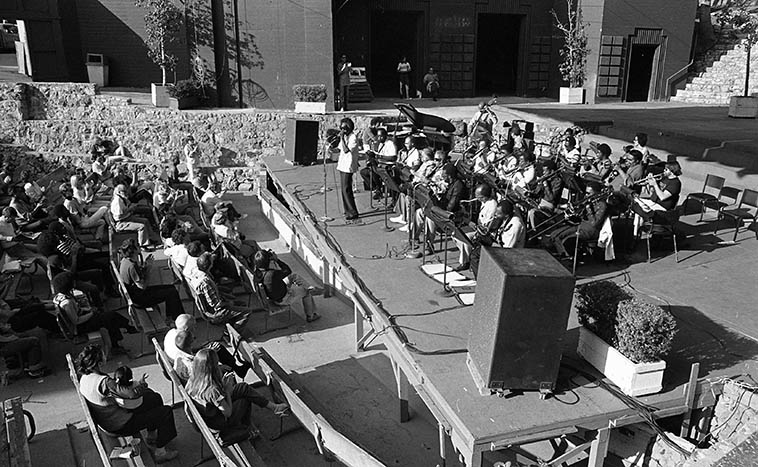 I always like to be sure and snap a few shots with the audience included, it’s the anthropologist in me, simply because jazz culture is not just the musicians on stage, it’s the gathered audience, the college stage band rehearsals, the music reviewers, the ticket takers, the disk jockeys, the weekend players, the concert promoters, the historians, the record collectors, the union officials, the arrangers & copyists, the young people on a date on a Sunday afternoon like this, the club owners, the rent-a-cops keeping the winos away, all that, and here’s the mighty Gerald Wilson Orchestra at John Anson Ford Theater, October 25, 1981 Los Angeles — photo by Mark Weber — Orchestra this day: John B Williams (bass), Paul Humphrey (drums), Shuggie Otis (guitar — I think he was married to Gerald Wilson’s daughter), Harold Land Jr (piano); Trumpets: Frank Szabo, Bobby Bryant, Oscar Brashear, Ray Brown; Woodwinds: Harold Land, Roger Hogan, John Stephens, Hank Vega, Jerome Richardson, Bobby Bryant Jr; Trombones: Maurice Spears, Thurman Green, Jimmy Cleveland, Garnett Brown, Clay Lawrey; and Gerald Wilson, conducting 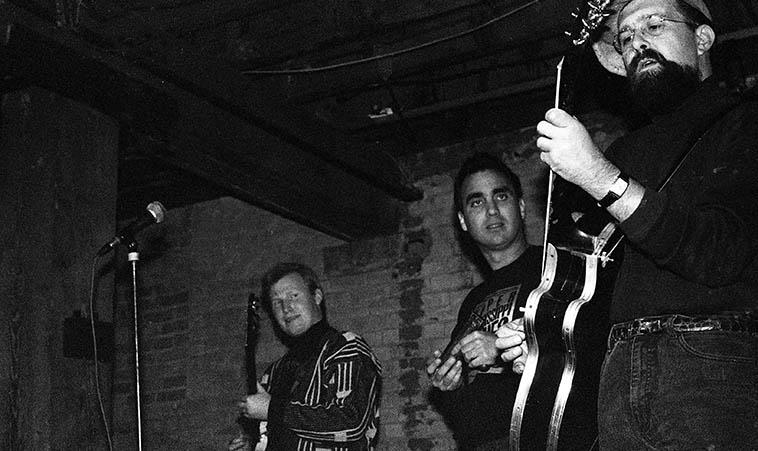 3 bad-ass blues dudes: Rusty Zinn(guitar), the late Lynwood Slim(harp), and the incomparable Jr Watson (hat) in Salt Lake City — November 26, 1990 — photo by Mark Weber —- one of my favorite Rod Piazza bands had Jr Watson playing guitar for years back in the 80s (he later went on to play with Charlie Musselwhite, and Canned Heat) 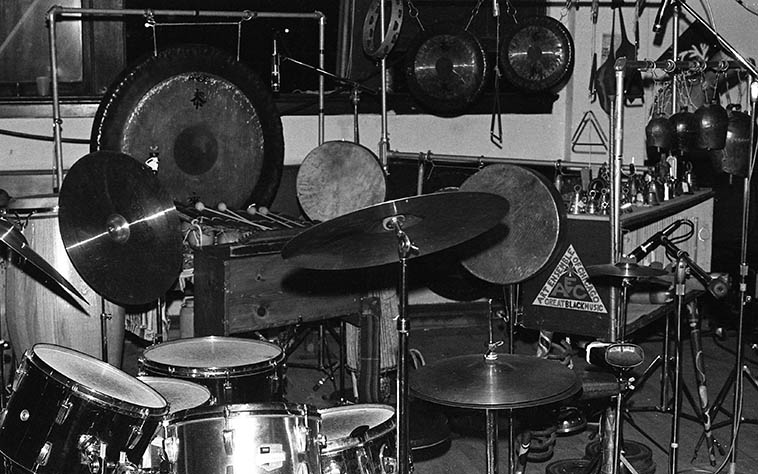 Art Ensemble of Chicago in Los Angeles — June 26, 1976 — They played 4 nights during a heat wave and I think Rope-A-Dope was taking place, too, I remember them watching it backstage on television — We went all 4 nights and it was the real deal — photos by Mark Weber 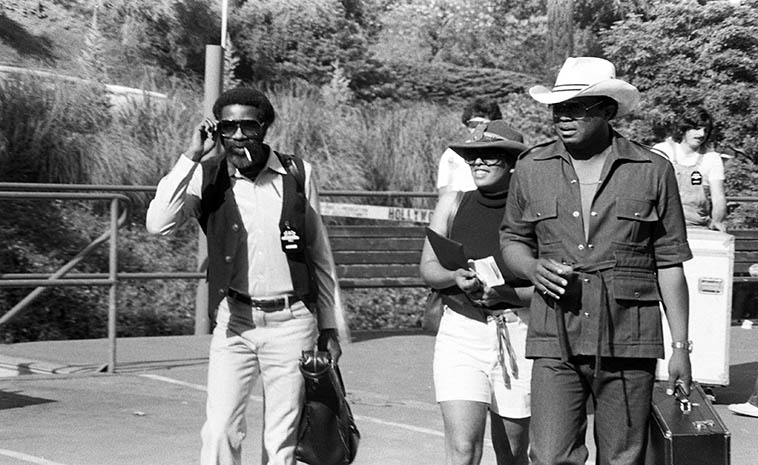 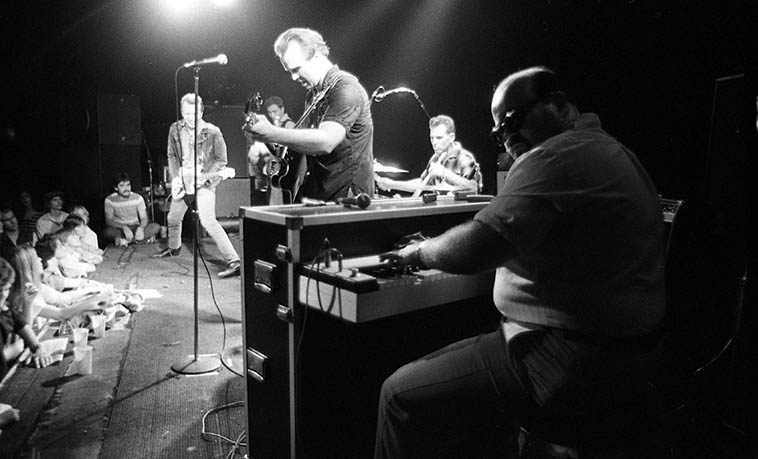 A smoking bluesy country rock band from Los Angeles calling themselves The Blasters — September 11, 1981 — Whisky-a-Go-Go —- photo by Mark Weber —- My friend Nels Cline had sent a postcard yelling at me: “If you don’t go check out The Blasters, you’re blowing it!” 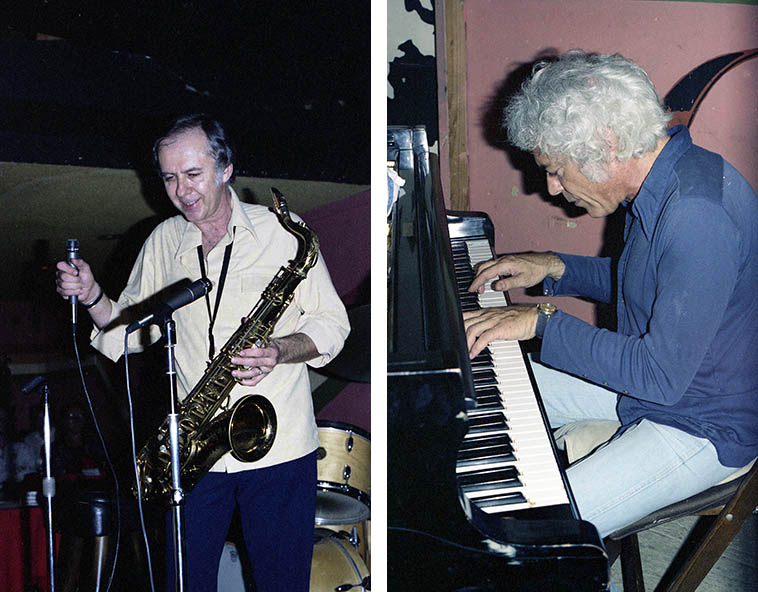 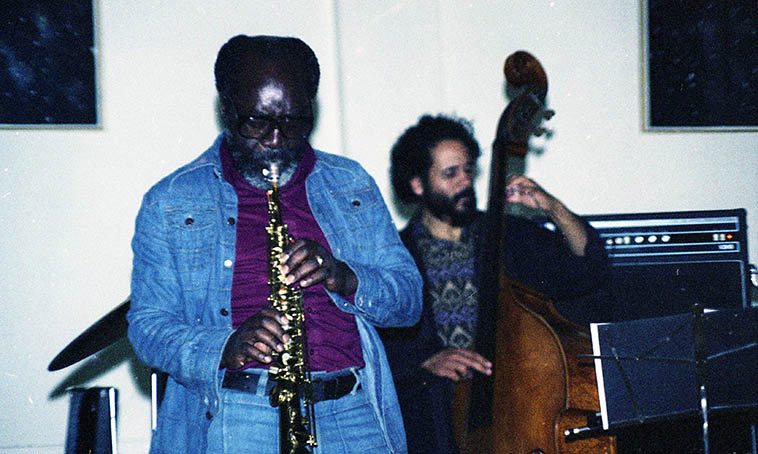 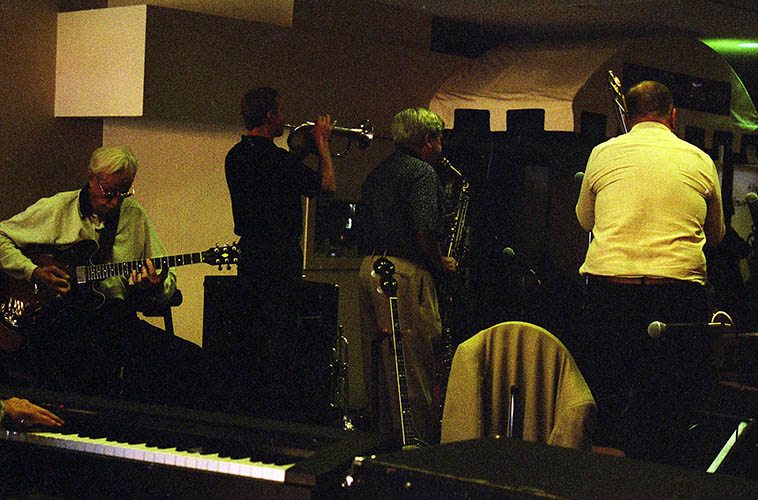 Local Albuquerque outfit known as Jazz a la Carte — And that’s the legendary Clyde Hankins on guitar, with Dick Trask(alto), Dick Rock(trombone), and my guess is that’s Kent Erickson on flugel (for some reason I didn’t make a note, but Kent was the regular trumpeter in this band) — October 10, 1999 — photo by Mark Weber ——– of Clyde’s many accomplishments are the years in L.A. he played with Johnny Richards, he got away from us in 2006 (Johnny Richards was the guy who wrote Kenton’s masterpiece CUBAN FIRE! (1956)) 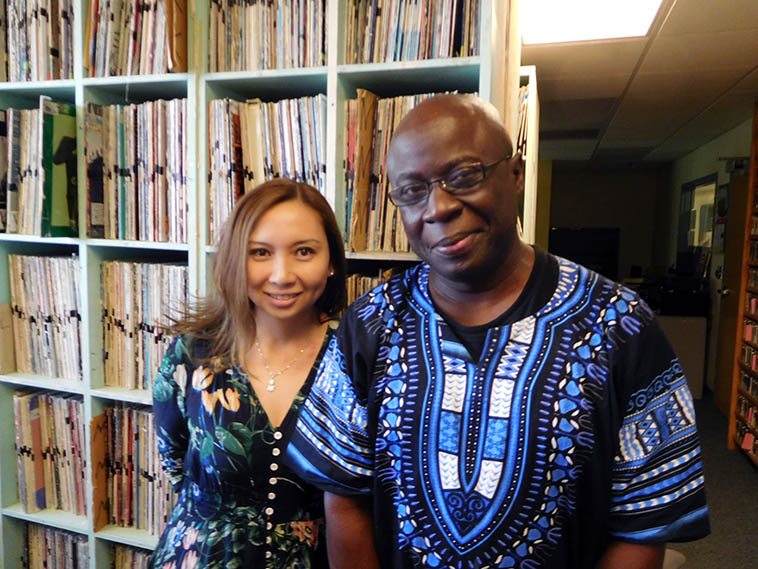 Meg Okura and Sam Newsome in the KUNM music library after our radio show August 10, 2017 — they were tremendous on-air guests and we covered some very interesting ground in our conversations — digital photo by Mark Weber 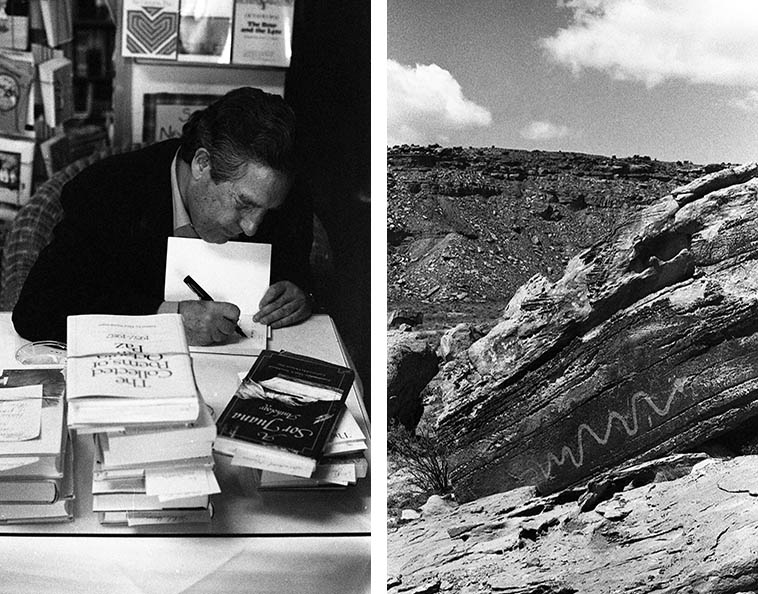 In the search for the beginnings of language we know that homo sapiens was wearing beads as early as 100,000 years ago in North Africa — the wearing of beads being a symbolic statement —- languages begin with symbolism, the first words are metaphors for something else, evidence of abstract thought, evidence of self-awareness and self-consciousness —- And before that, around 160,000 years ago, we know that homo sapiens used ochre (iron oxide) as pigment —- This photo is of Fremont Culture (could be as early as 2,000 years ago) on Moore Road Cutoff, San Rafael Swell, Utah on April 7, 1990 ———— Octavio Paz looked at me questioningly when I handed him my old dog-eared copy of THE LABYRINTH OF SOLITUDE (Grove Press, 1961) as usually collectors want mint copies signed by the author, he looked at me then realized that this copy was special to me, it was the one I had read several times, and even took it to Baja California once to read to see how it felt to read this great book in Mexico —- Anybody who has ever spent time in Southern California should read this book, the essay on pachucos and lowriders, especially —- At the time I was working swing shift at the post office in Salt Lake City and when I told my supervisor (aka “stupervisor” as one of my colleagues referred to them) that I will be late for work this day he said, “I can’t allow that, you have to be here,” I was only hired as supplemental help, and if they wanted my whole loyalty they needed to hire me and pay a respectable wage, I told the guy: “I’m not asking you, I’m telling you I won’t be here, I’m going to meet a great poet.” October 20, 1989 at the King’s English bookstore —- Both photos by Mark Weber