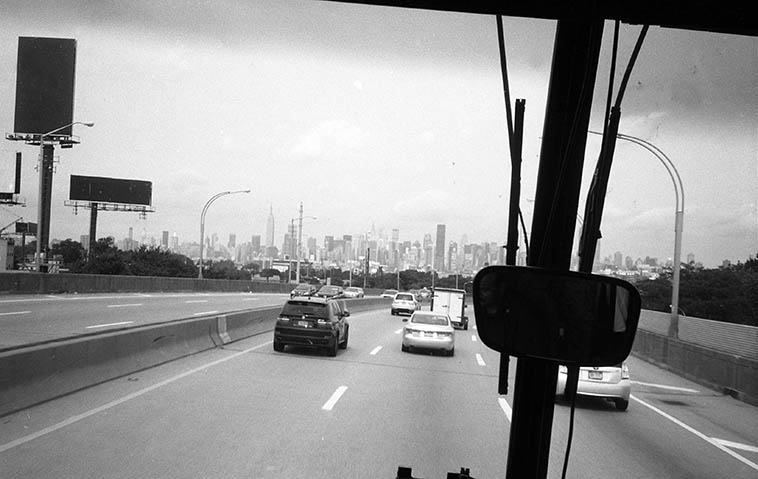 Roaring into the city at 9am on the Hampton Jitney approaching the Midtown Tunnel (42nd Street) — August 6, 2o11 — photo by Mark Weber

And so,
with regards to nothing more
than a few stones
collected at seashore
now endowed with nostalgia
I keep them as talismans
long and lonely
never allowing loss to
weigh too heavy
or
keep any of us
earth-bound wanderers
threading back to refuge 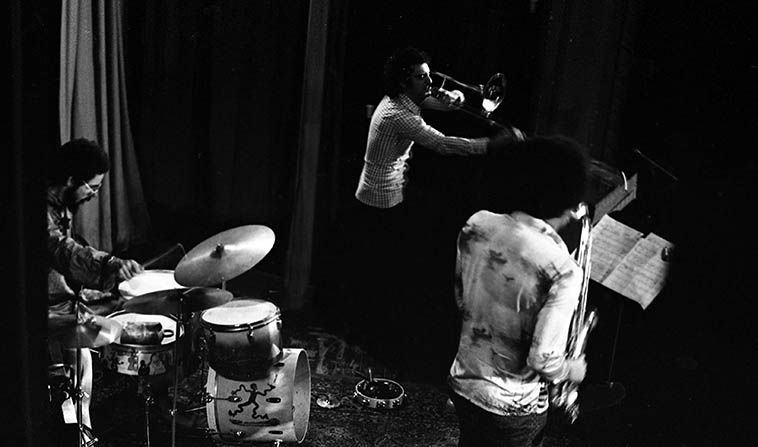 Believe it or not, that’s James Newton with a tenor saxophone —- October 8, 1976 —- Balch Auditorium, Claremont Colleges, California —- James also used a bass clarinet this concert, along with the flute, which has always been his mainstay (although legend has it that in his teenage years he started out on electric bass) — This was his gig and he brought Tylon Barea(drums) and Glenn Ferris (trombone) regular cohorts during those halcyon days when we all delved into the avant garde —- (Subsequent generations don’t seem to have ever passed through an avant garde stage in their development — “Paging Dr Freud, there’s a Wynton Marsalis here to see you”) —- In those years the practice of multi-instrumentalist gained some currency, especially under the influence of the miracle workers at the AACM, hence the tenor saxophone that James is holding, I would guess the only time he ventured out with that instrument, whereas, he toyed with the bass clarinet for a full year or so, coming from our generation’s admiration for Eric Dolphy —- I’d ask him more specifics but he moved back to Los Angeles in late June 2016 to be with his aging mother, he and JoAnn and their daughter Sydney having lived here in Albuqueruqe (Corrales) for ten years, off & on . . . . 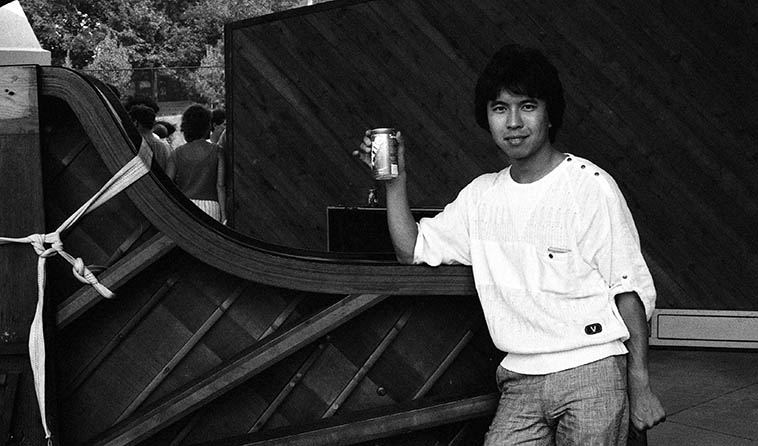 Makoto Ozone and his refreshment after the gig at Cleveland Zoo, Cleveland, Ohio, with the Gary Burton Quartet — August 17, 1986 — photo by Mark Weber 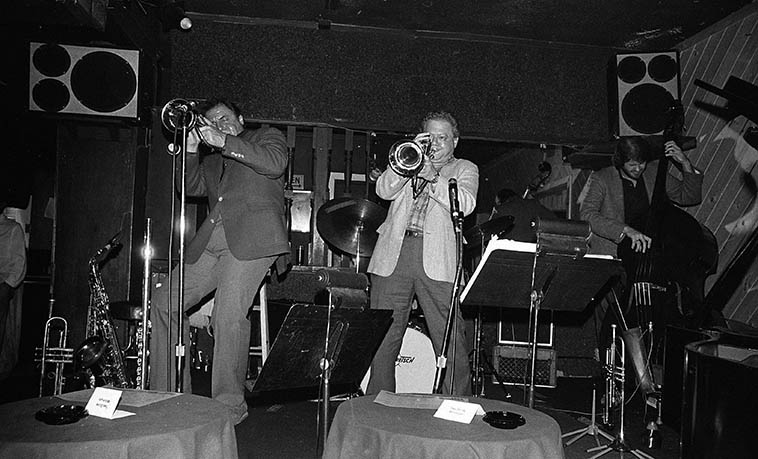 I recently acquired the Lp BILLY TAYLOR TRIO INTRODUCES IRA SULLIVAN (ABC Paramount) from 1956 and on the first 3 tracks Ira plays trumpet and sounds great, then picks up the alto on the 4th track (side A) and it struck me that trumpet must have been his core instrument as he phrases on the alto like it’s a trumpet —- In this photo it looks like he and Red Rodney are both playing flugelhorns — March 17, 1982 in North Hollywood at Carmelo’s (Jay Anderson, bass) —- photo by Mark Weber —- Later, when I voiced this theory on the radio an astute listener called and said that he’d seen an interview where Ira revealed that the trumpet was indeed his first instrument . . . . 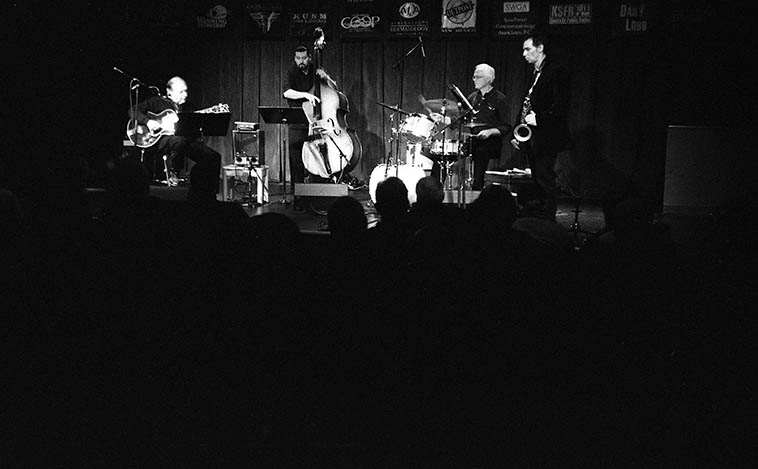 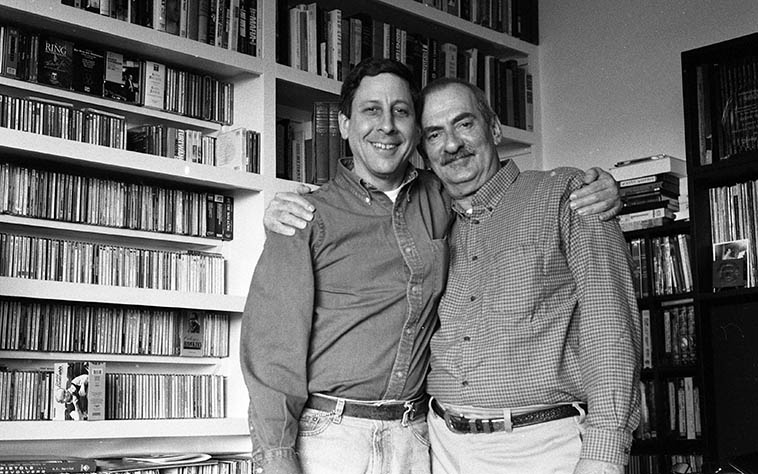 I hung out a lot in that room ——- That’s guitarist James Chirillo and Kenny Davern in KD’s listening room at home in Sandia Park, New Mexico (note the Furtwängler cd box on the shelf — KD was a major scholar of Furtwangler) —- December 13, 2004 — photo by Mark Weber 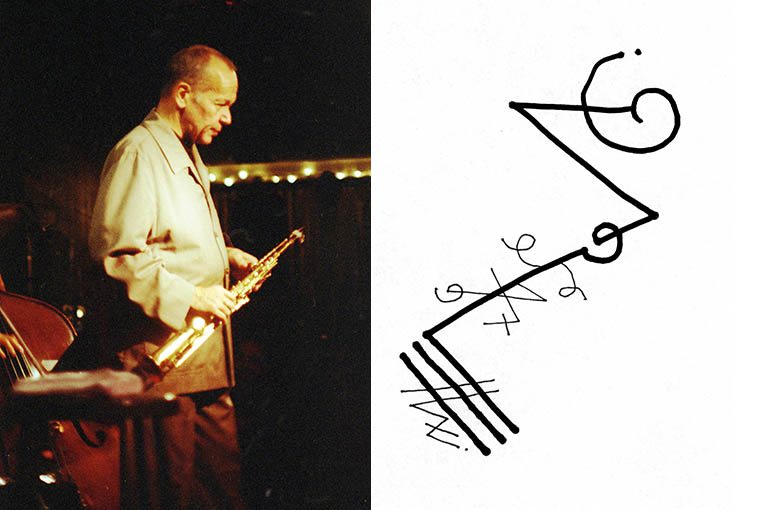 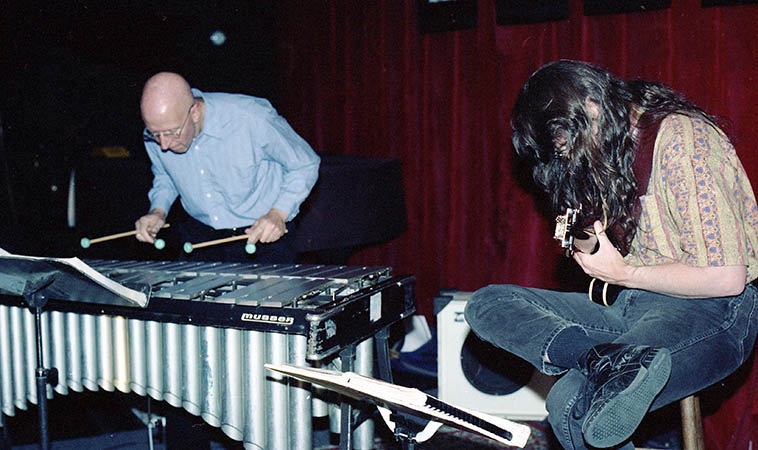 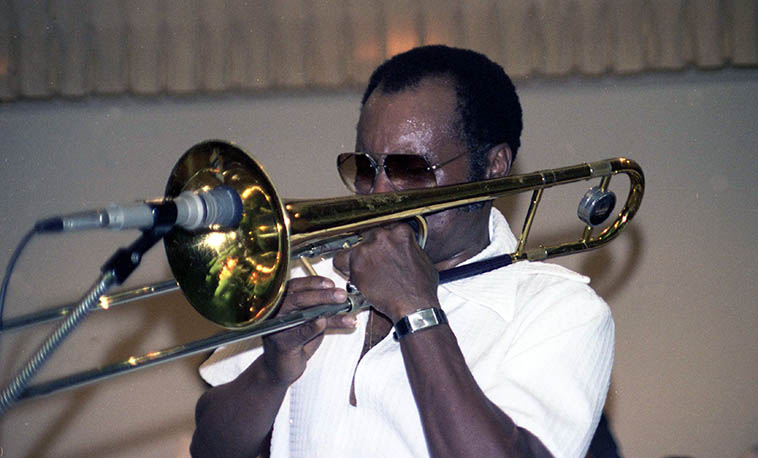 Buster Cooper at the memorial for Blue Mitchell at Local 47 Los Angeles — June 10, 1979 — photo by Mark Weber — This guy could do it all: big band section, small group interaction, studio work, road work, symphony, club dates, Duke Ellington 1962-1969, settled in L.A. by 1973 into the big bands of Gerald Wilson, Bill Berry, Nat Pierce’s Juggernaut, etc —- We’ll listen today to the only album Buster Cooper made under his own leadership: E-BONE-IX from 1989 —- Buster got away from us last year at age 87 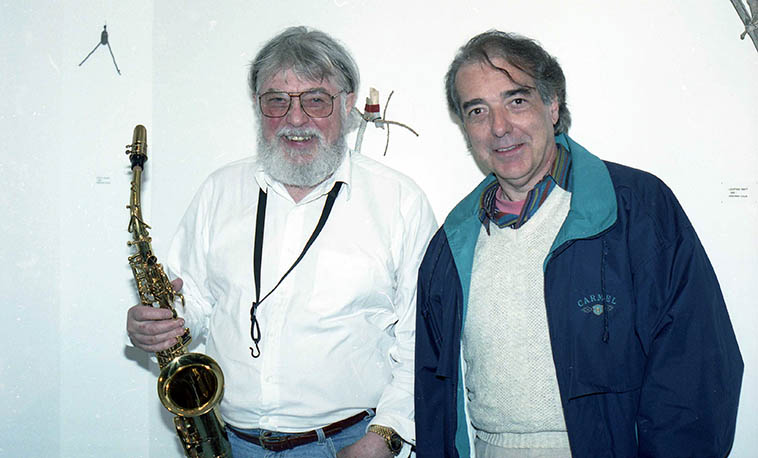 Two refugees from the studios of Los Angeles: Bud Shank & Michael Anthony —- April 7, 1997 Albuquerque when Bud was in town to play at the Outpost, where this photo was blinked in the art gallery — They played on many sessions together in the 70s —- photo by Mark Weber (driftwood assemblages by Deborah Cole in the Inpost Art Gallery) 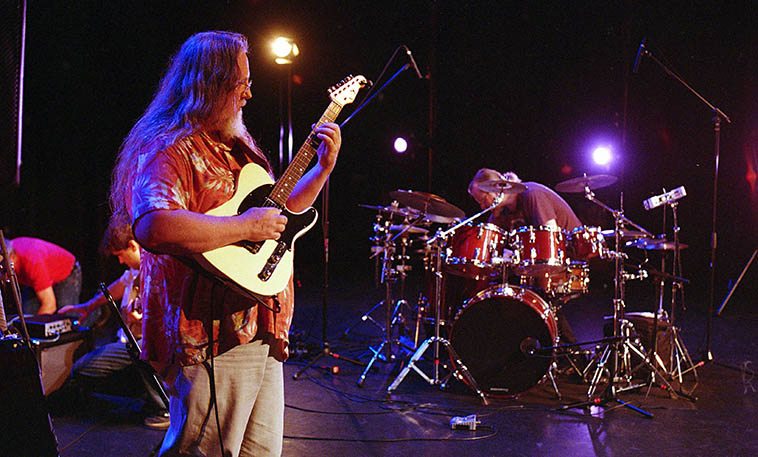 Lewis Winn and the trio Right About Now — John Bartlit(drums), Jon McMillan(bass) at a filming during my brief career as a host of a TV show about local jazz, filmed here at a black box studio with audience — August 19, 2o13 Albuquerque — photo by Mark Weber —- That guitar looks like a Telecaster, which reminds me of the time Lewis on stage at the Albuquerque Museum Amphitheater some years ago, puts down his Gibson and says to the audience, “Every now and again a man just has to strap on a Fender” —– Lewis will be visiting the Thursday jazz show on October 26 to play live over the airwaves in-studio in duet with bassist Milo Jaramillo 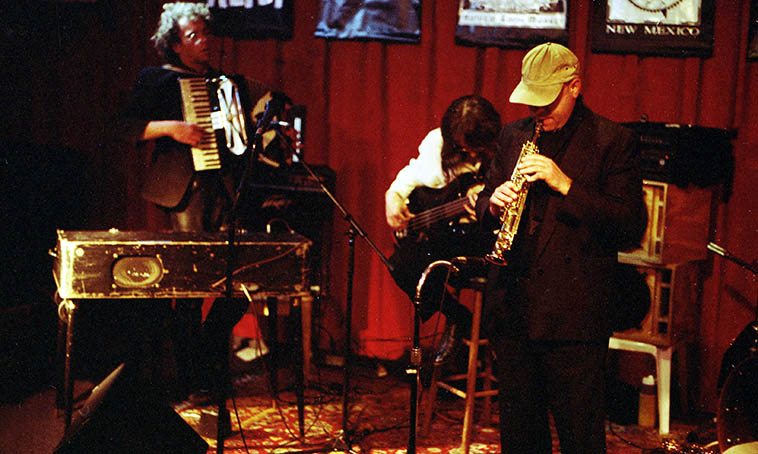 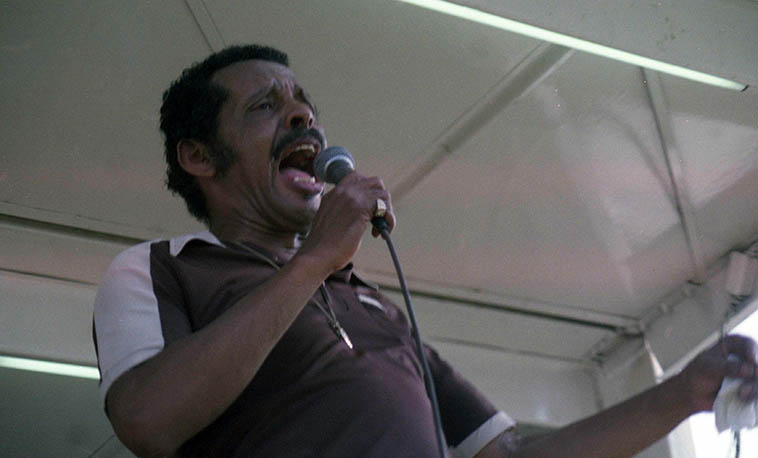 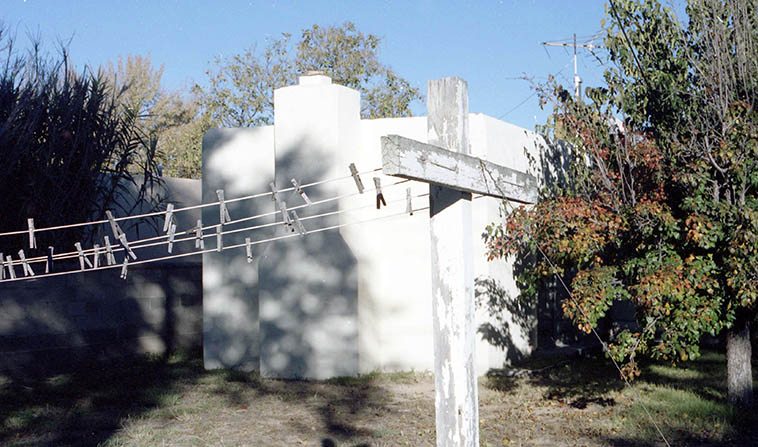