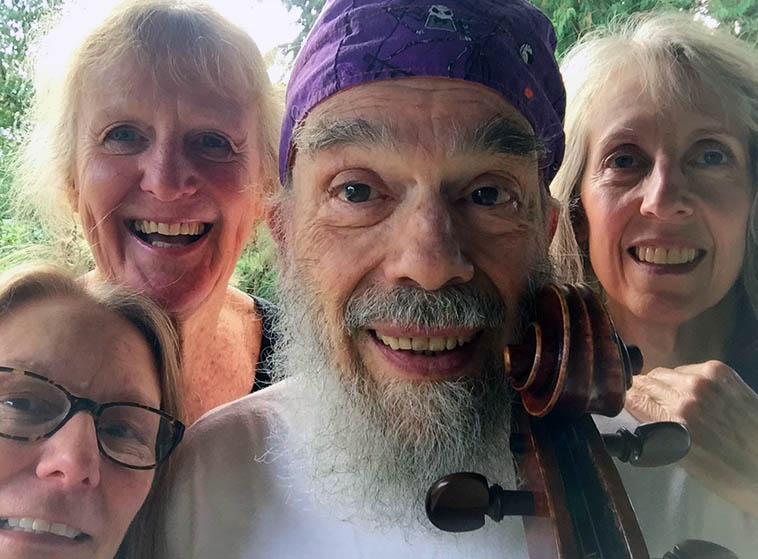 The Alder Quartet (Sue Baer, violin; Margaret Storer, violin; Linda Morris, viola; Buell Neidlinger, cello) —- By the time of this radio show this concert will have taken place: Sunday, November 12 at 2pm Langley United Methodist Church, Whidbey Island, Seattle —- the handbill says: They eat chocolate, discuss the state of the world and their own lives, swap stories, and play some of the most wonderful chamber music ever written . . . The quartet will play music by Bach, Haydn, and Beethoven. NOTE that the lady wearing glasses is Margaret, Buell’s wife of 40 years, plays “second violin,” and one of the most recorded bassists of all time in the L.A. studios

Saturdays have always been something special to those of us from the working class. In California it was magical, especially the mornings, so crystalline, that special thing that was in the air back then. It was a day where we’d disentangle our brains from the job, even as we turned down the boss’s shaming tactics to get us to work on Saturday, “over-time pay” he’d say, or “only half day.”

Back then you had to be careful not to upset this guy, he was so obsessed with being in charge that a Saturday without bossing was aggravating to him, but you were protected by a law that kept your fealty to the job limited to 40 hours, even as it wormed into your brain where guilt was waiting its food. The boss has always been around, you wonder what narrow-minded psychology entraps these types? What are they scared of? I suppose all the things we’re all scared of: jobs are scarce and food and shelter always a concern.

I keep intending to improve my gardening skills, growing your own might be a necessity if this new bozo in the White House blows everything up —- I don’t mean nuclear catastrophe, I can’t imagine that the guys who watch the bombs will let that idiot near them, not unless they themselves are wiffle-brained, “I’m trained in top-down chain of command” I saw one brainwash job say on TV the other day —- What I mean is he appears to be intent on destroying the natural world, not having a clue what it’s like to walk in the High Sierras, or the Mojave Desert, or Yellowstone, or the Grand Canyon, and all the secret places unknown to the general public. Saturday mornings of crystalline dew sparkling with possibility are gone. I thought about this garden thing after losing my place in line at the supermarket the other day, I had spent the day traipsing around in the mountains, and on my way home stopped to buy some pomegranate juice, of all things, (the It Drink right now among us health nuts), and a cabbage and one of these enchanted gala apples, so delicious in early Fall, when the cash register crashed and the cashier moved to the next register and my fellow shoppers all scrambled to get there first and even though I had my cabbage and
grapes and so forth on the conveyor belt, that was all over, and it was either back to the end of the line and start waiting all over again, or walk out.

America is not the same anymore. (The saxophonist Arlen Asher said those very words to me the other day. I didn’t put them in quotes because I’m saying the very thing myself right now.) In Canada I would have democratically resumed my spot and left with my juice. Even in NYC these days I would have found myself consideration. Out here in the hinterlands it’s dog eat dog and the new President loves that. 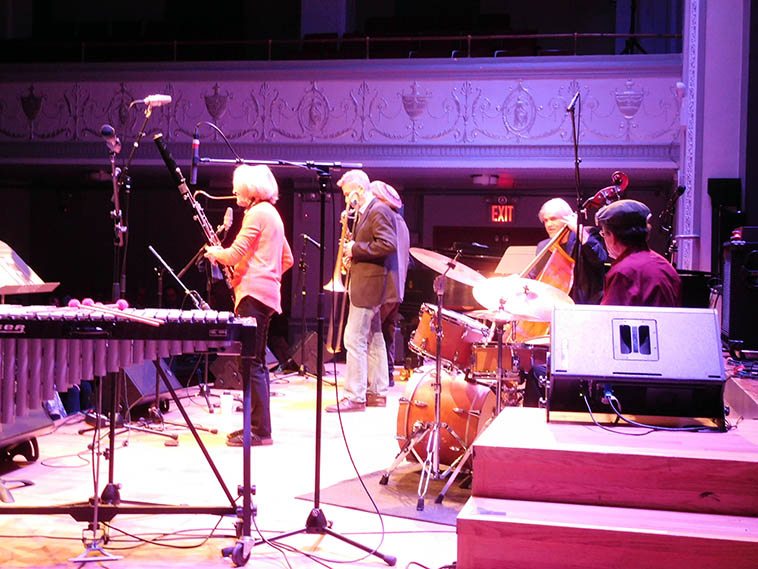 Karen Borca(bassoon) with a band assembled by Warren Smith, of whom I hope to interview on the radio show, soon, concerning his years with Max Roach’s M’BOOM — I was quite busy with M.C. duties that day so really wasn’t concentrating on photos (besides, Scott Friedlander was on the set, see his magnificent shots) —- the Connie Crothers Memorial at Roulette — November 13, 2o16 —- photo by Mark Weber —- Warren’s band: Ken Filiano (bass), Andrew Lamb (tenor), Steve Swell (trombone), Warren (drums), Karen (bassoon) 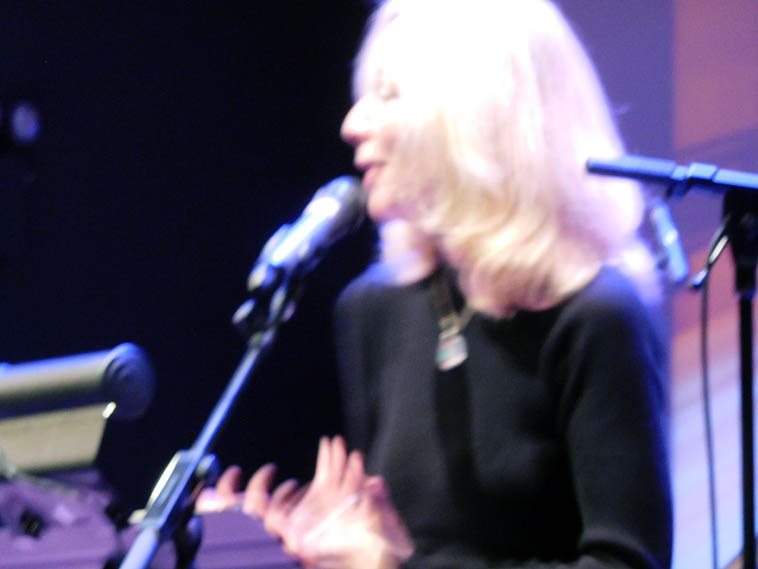 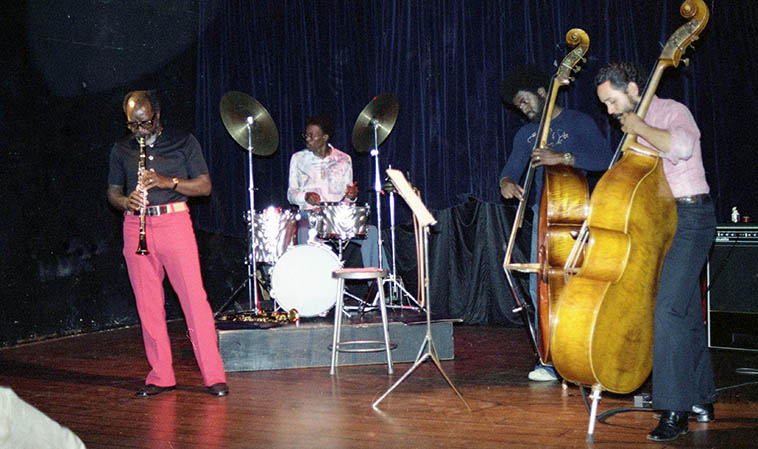 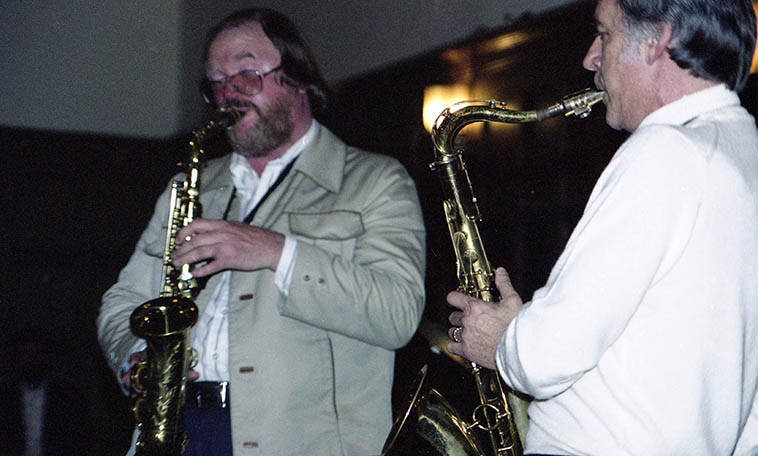 Gary Foster & Warne Marsh — April 28, 1977 Cal Tech, Pasadena — photo by Mark Weber —- I believe I’ve said this before at JFM and I’ve certainly voiced it on the radio, and that is that this particular thing we call poetry visits moreso in music than in poetry —- Why? Is it because words are an adaption, a layering upon consciousness that is an impermeable barrier to the deeper consciousness? (see my upcoming essay on Word Virus) —- Music, and painting, and dance, and cinema occasionally, all get to that place more readily, especially music. Poetry has the name and the reputation but comes in dead last in the arts —- call it gravitas or pre-rational introspection, elegance, thoughts frozen in time, sublimity . . . . 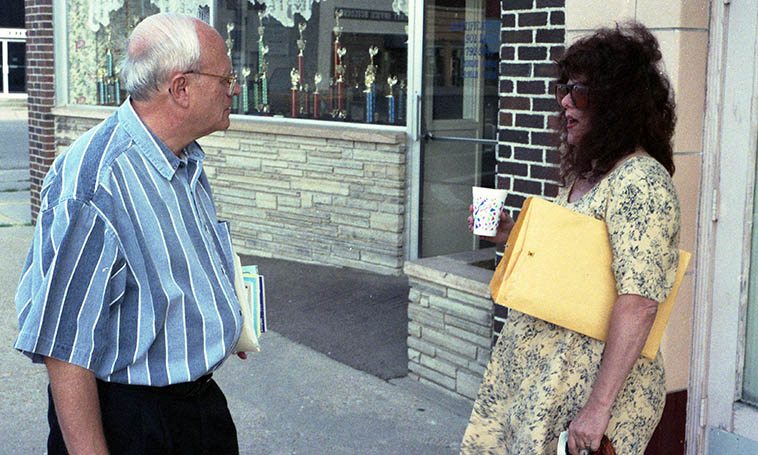 Todd Moore and Joan Jobe Smith — Great Bend, Kansas — August 5, 1995 at the Poetry Rendezvous —- two of the real poets in America —- photo by Mark Weber —- Todd was a frequent guest on the radio show, we would do theme shows, the first being “noir & crime jazz” (as we refined this idea we decided that those were two different categories — we did about ten of those shows over a 5 year period until we had it perfected — Todd wrote the poetry I spun the records) We did other themes also, like the one we called Central Avenue Rundown Jazz Radio Show —- I took Todd around to various local clubs on Central here in Albuquerque so he could get the feel, and introduced him to the musicians —- at Bumblebee’s Baja Grill the trio was with Tony Cesarano on guitar and Todd jotted this one down on the spot, Tony loved it when we showed it to him at the break (that was March 6, 2oo8) : 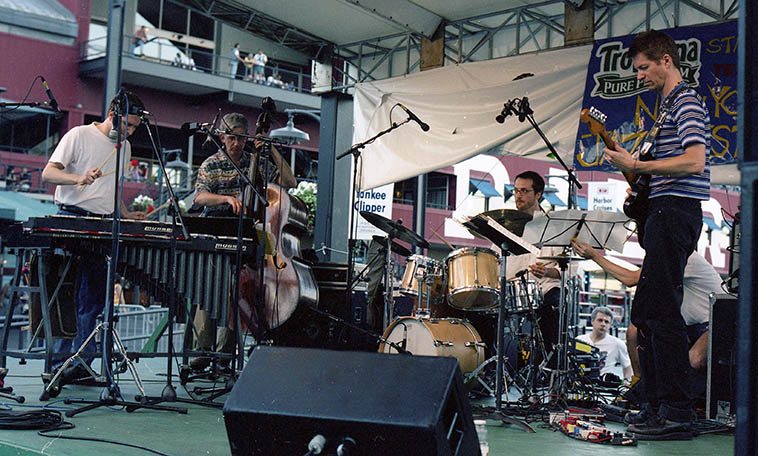 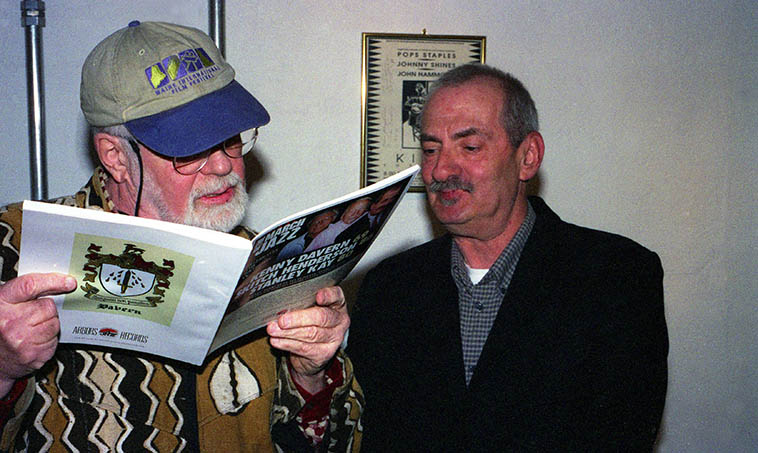 Two old buddies from the Village days of the 50s backstage at the Outpost Performance Space — Roswell Rudd and Kenny Davern — March 28, 2004 — photo by Mark Weber —- You can hear KD on Roswell’s cd BLOWN BONE (Emanem 4131)(1976) along with Sheila Jordan, Steve Lacy, and a gang of others 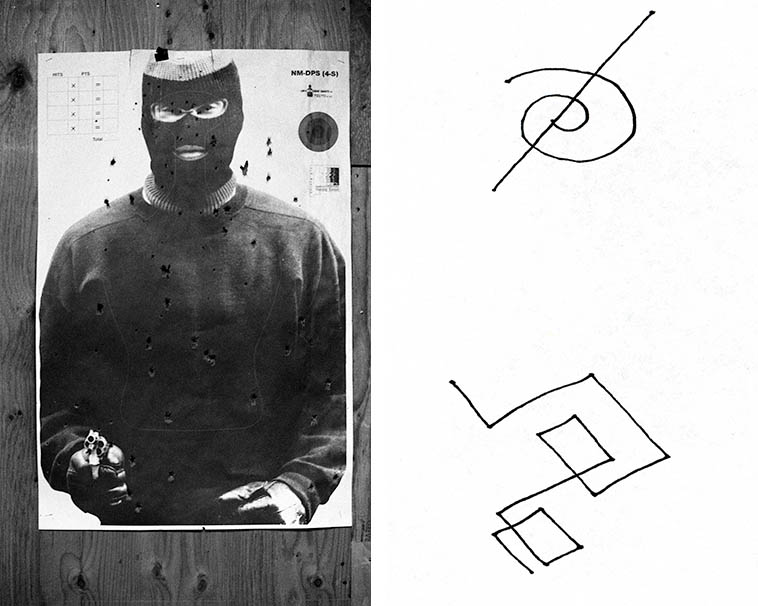 Kenny Davern used to take me out target shooting every now and again —- He had an arsenal, he even had one of those German lugers w/Nazi insignias on it —– So, we’d mess around with these guns out in the desert hereabouts, or over at the police range, this time we were at a gun range in the basement of a gun shop here in Albuquerque and when we were asked to pick our targets Kenny goes for this one, and I said, Kenny, don’t pick a person fergawdsakes! (I picked an old-fashioned zero target) —— I thought about Kenny when I read “It’s not uncommon for foster children to have ten, eleven, twelve sets of foster parents during their childhood,” in Senator Al Franken’s new book GIANT OF THE SENATE (2o17) —- At one point KD thought I should help him with his autobiography, and toward that we did some interviews, and one of the reasons I bailed on the project was Kenny absolutely refused to talk about those young years when he was in foster homes (see Ed Meyer’s excellent biography on Kenny, of whom I turned over these recordings) Henceforth, the senator’s struggles at getting his amendment passed on an education bill, where stability was on his mind, Al Franken is so right on: “For foster kids, school is often the one constant in their lives. Maybe they have a teacher they really like. Or an extracurricular activity that means everything to them. Or maybe, maybe they have these things called friends.” p280 —- target from the collection of MW (this hangs in our garage) 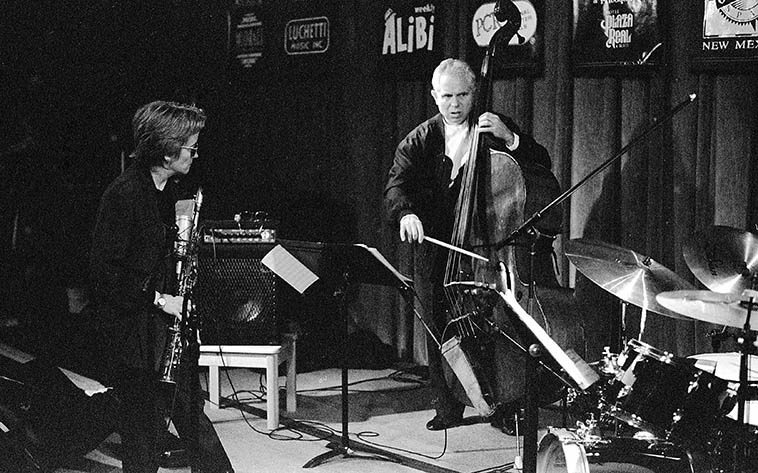 Bass solo by Cameron Brown —- The Jane Ira Bloom Trio w/ Bobby Previte(drums) — October 28, 1996 at the old Outpost — photo by Mark Weber —- Did you know Cameron can speak Swedish? He lived in Stockholm for several years, surprised me when he went into it with Eva Lindal (violinist) back in 2014 when we were all in town for a gig (NYC) 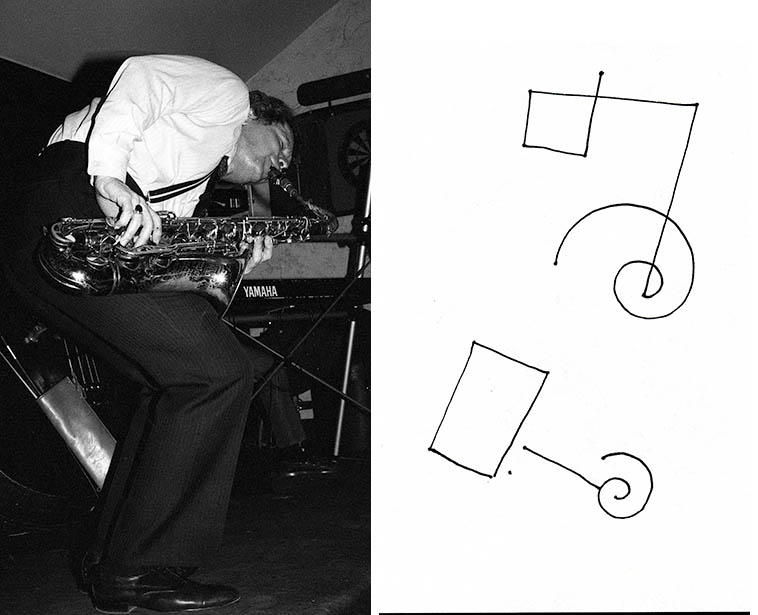 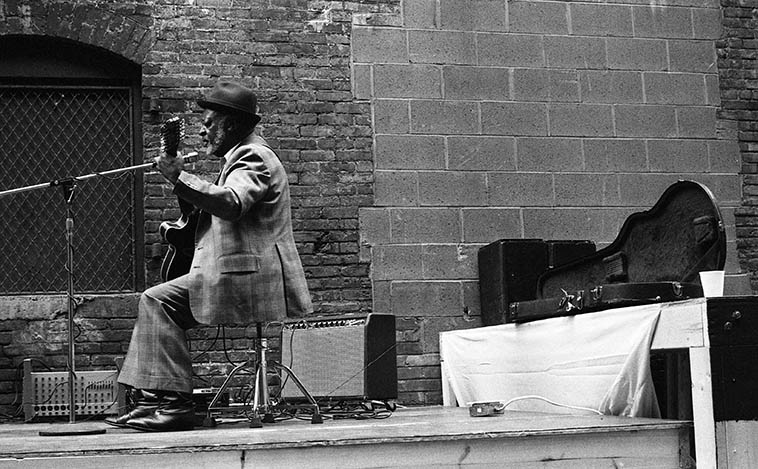 Robert Jr Lockwood — playing his 12-string in an alley in the Warehouse District, downtown Cleveland — May 16, 1987 — photo by Mark Weber —- the latest issue of LIVING BLUES has a smoking good piece of investigative journalism on the origins of Robert Jr’s step-father Robert Johnson’s devil at the crossroads mythology, I can’t stress enough what a great magazine this is, we subscribe 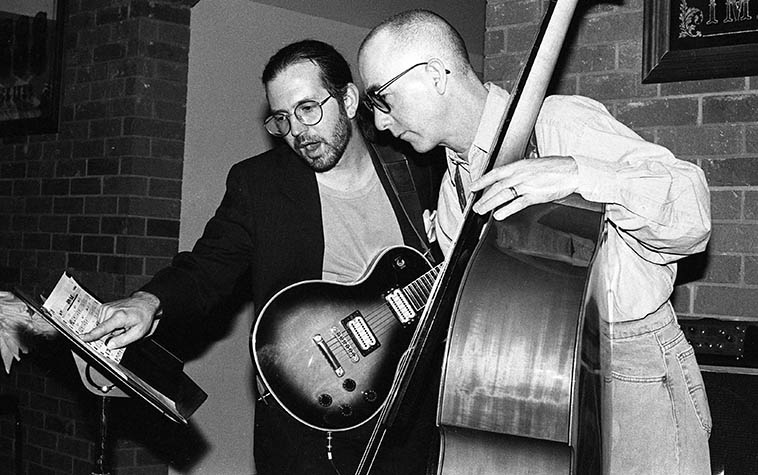 Stefan Dill and David Parlato playing a club date on Central Avenue, Albuquerque — February 13, 1996 — photo by Mark Weber —— I called David on the evening of his birthday (Oct. 31) in Ventura, California, little beach town and he’s doing fine, still has his church gig Sunday mornings, and sometimes subs in Paul Anka’s concert band (we’ll update the David Parlato TimeLine with these occurances, soon) among other civic activities and being a grandfather 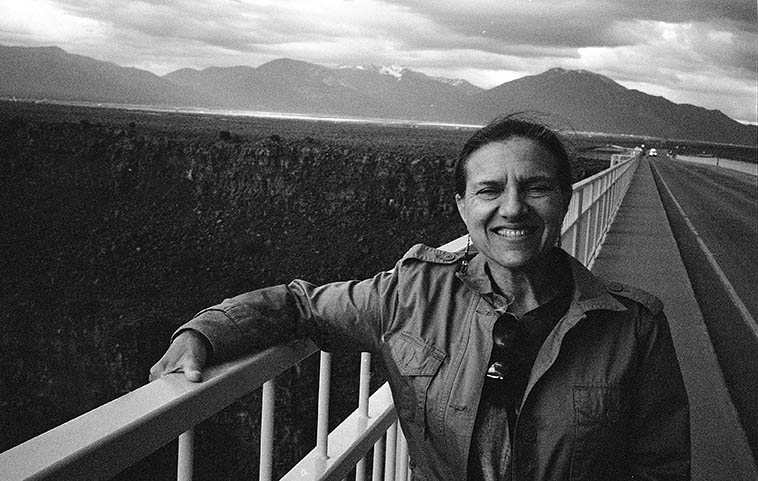 Janet and I on one of our little weekend road trips a few hours north of Albuquerque — She’s standing on the Rio Grande Gorge Bridge with Taos and the Sangre de Cristo Mountains looming — evening coming on June 6, 2o15 — photo by her husband