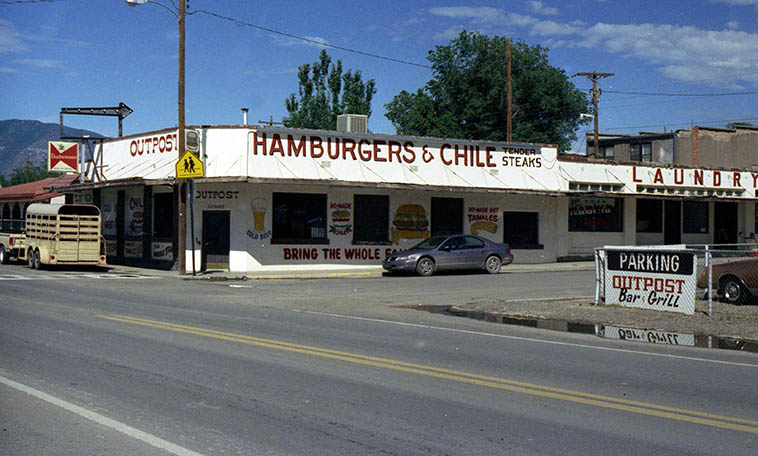 Only one hundred years ago
—– music boxes?
Even those have their organic reality 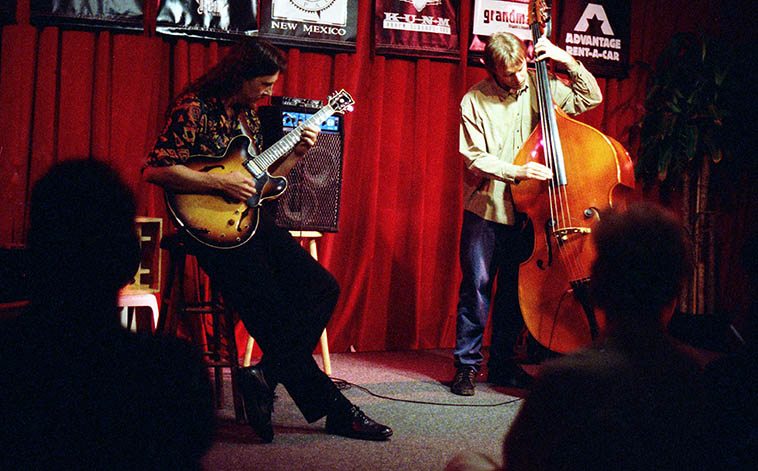 In days gone by these two had a very active duet thing going on, now they live two cities apart, a tale of two cities: Santa Fe and Albuquerque — Lewis Winn(guitar) and Jon Gagan(bass) at old Outpost — June 16, 1997 — photo by Mark Weber —- Jon will be bringing a group into the new Outpost this coming December 7 that includes a quintet of Santa Fe hotshots (Pat Malone on guitar!) 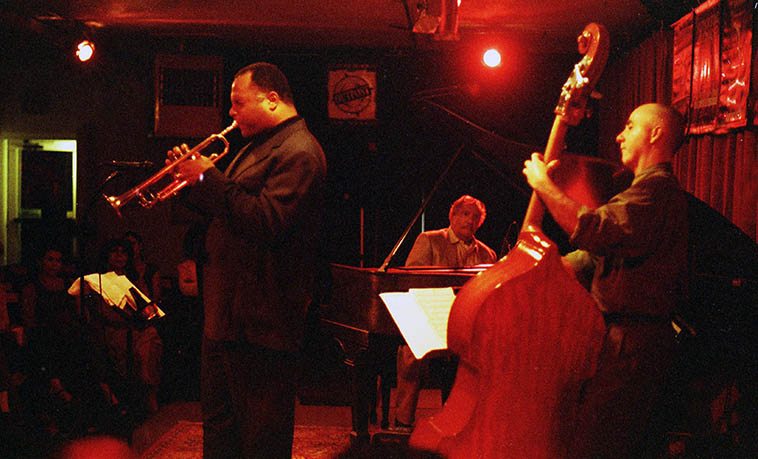 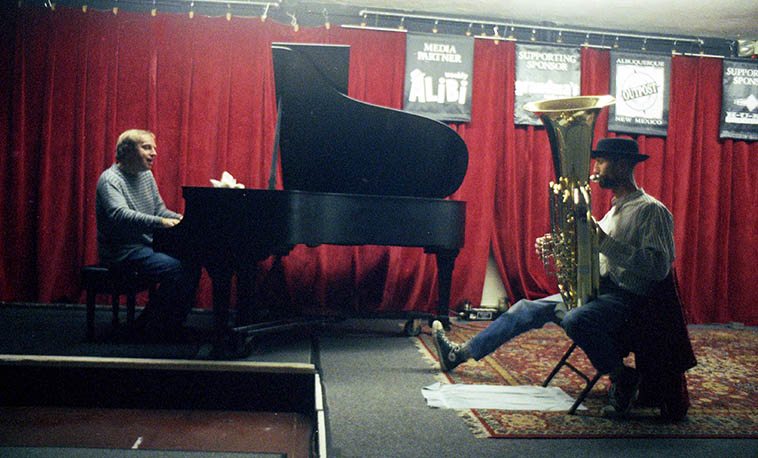 Afternoon session at old Outpost — Paul Plimley of Vancouver BC and Mark Weaver of Albuquerque —- October 22, 1998 — photo by Mark Weber —- two of my favorite musicians 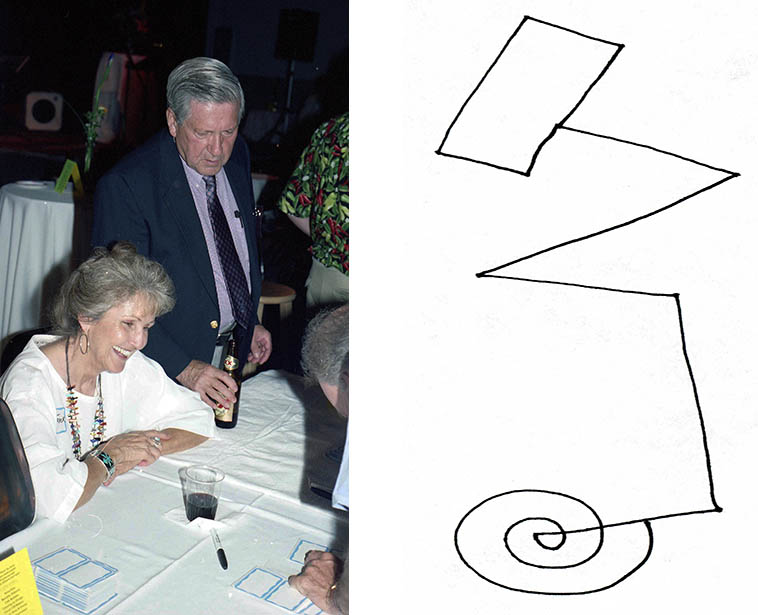 Kitty & Dick Trask, dearly departed —- Dick grew up in NYC and was a denizen of 52nd Street in the good old days, they moved here to Albuquerque in the 60s with the aerospace industry, which was Dick’s bread & butter — He had the absolute genius of playing his alto saxophone with complete abandon & joy —- photo by Mark Weber — August 25, 2000 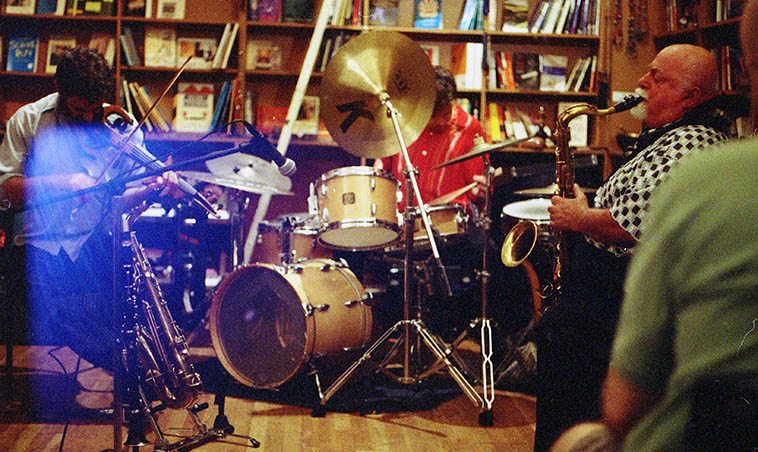 Joe Maneri Trio w/ his son Matt (electric 6-string violin) and Randy Peterson(drumset) at Biblios Bookstore, 317 Church Street, way down yonder in SoHo — June 28, 1997 — such interesting music, the maestro of microtones visiting NYC from Boston —– It was a very warm summer evening and I remember getting lost afterwards as the subway stations down there close after-hours, and I wandered around for more than an hour looking for a subway station to make it back up to Upper West Side where I was staying at Janet’s sisters digs — photo by Mark Weber — It’s dark in SoHo that time of night, very eerie, (I have a variety of spatial dyslexia where I can’t tell north from south — Max Roach had it, too —- A few days later I got to talking with an psychic who told me that it’s something in the rocks under southern Manhattan that was screwing up my sense of direction —- It seriously effects me, especially in that locale) 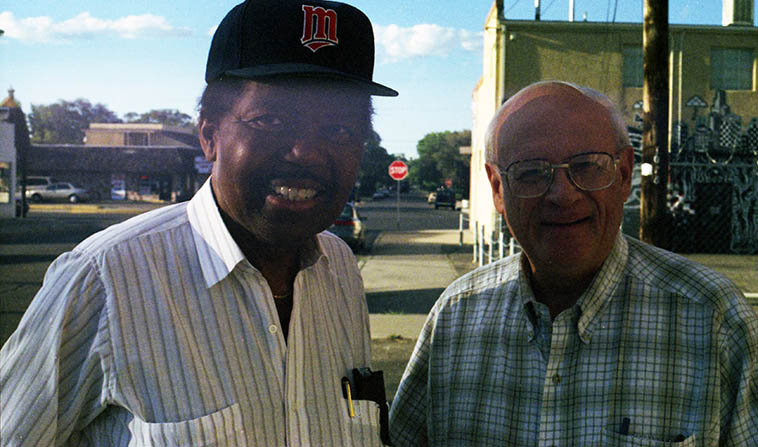 People of a certain age will know the legendary Lanny MacDonald, pianist, singer, raconteur, and lounge act (cruise ships, etc), and poet Todd Moore — We’re standing outside the old Outpost on Morningside, that colorfully painting building behind them on Central (aka Rt.66) is an antique shop Cowboys & Indians where Todd worked for about a year, funny gig for Todd, but he needed to get his Social Security together and needed a few more points, so he worked that out selling old western collectibles —– Lanny had just regaled us with his story of the time in Chicago that Charlie Parker had wrangled ten bucks out of him — photo by Mark Weber — September 10, 1999 Albuquerque 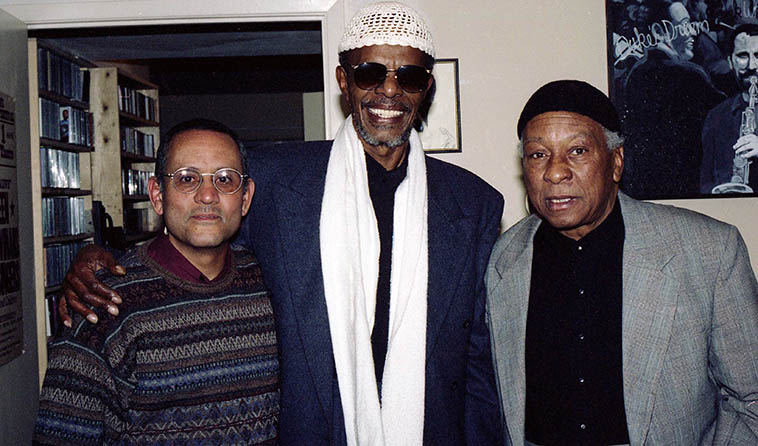 Roberto Miranda, Horace Tapscott, Frank Morgan — upstairs at old Outpost Performance Space where Roberto & Horace were in town for a concert of duets —- Frank lived in Placitas at the time and came by for a visit —- February 14, 1998 — photo by Mark Weber —– Earlier in the day after Horace had tried out the Steinway I asked how he liked that piano, and he said, “Yeh. I like it. Wood,” in that elliptical way he spoke those years (as he got older he seemed to get more verbose). 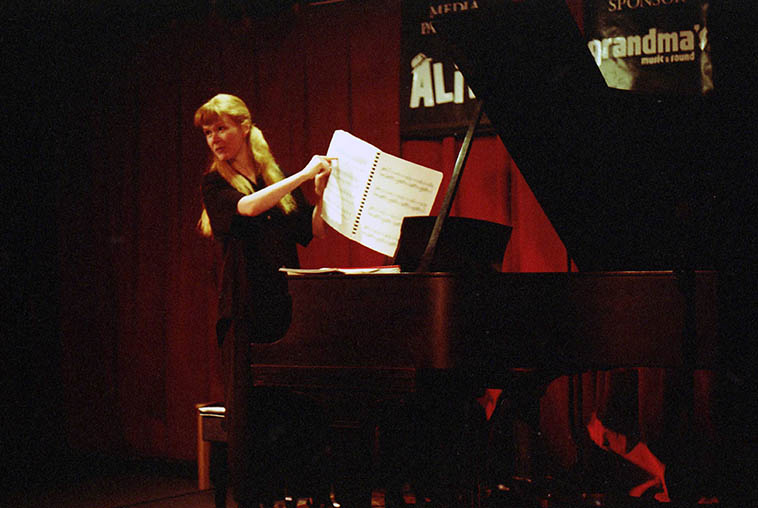 Sarah Cahill solo piano music of Ruth Crawford Seeger, from San Francisco, brought to town under the auspices of Steve Peters/Nonsequitir, and what a revelation to hear this deeply quiet music, I’ve been a devotee ever since, Ruth also composed some fantastic chamber pieces, as well, for years I’ve been playing her arrangements in the Lomax BEST LOVED AMERICAN FOLKS SONGS (1947) not knowing there was this deep well behind all that —- (I’ve often wondered if Sarah is related to that turkey Police Chief Cahill who menaced the Haight Ashbury community in the 60s?) Then again, there’s other Cahill’s, like the historian Thomas Cahill who’s books I can recommend, like SAILING THE WINE DARK SEA about ancient Greeks, and the one where Irish monks save civilization —- Photo by Mark Weber at old Outpost, Albuquerque, October 17, 1998 —- When the late Mike Seeger played the Outpost a few years ago I told him how much his mother’s music means to me. 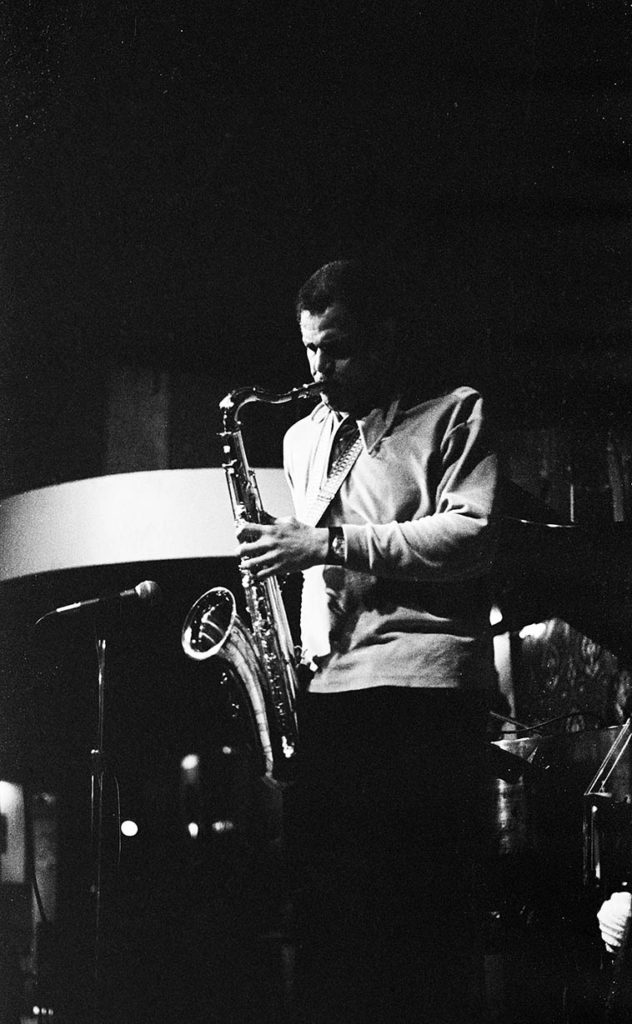 Dexter was a lot of fun these years of his “return” to the U.S. (1976), it was celebratory, dramatic, heroic, his music was deep and his solos long and circular —- Long solos being a thing back then, almost avant-garde and dare I say: not always cohesive, wandering from one thing to another, sometimes they seemed like a bebop science lesson, but we loved it, again, it was the times —- (I actually saved a roach I smoked with Dexter that is now in my UCLA archive, haha — don’t tell the police) —- During applause he’d offer his saxophone to the audience —- I’m so glad for the many live concerts being made available from those years when he was on the road with his quartet, they are valuable documents —- Still, it’s the studio album MANHATTAN SYMPHONIE (1978) produced by Michael Cuscuna that is his masterpiece of those years, it is a direct hit, more contained, a pure distillation of the Dexter concert experience —- Dexter had family in L.A., so we had a lot of opportunities to catch him, George Cables was central, but we also caught Dolo Coker (pre-George) and Kirk Lightsey (post-George) —- Another of my favorite Dexter albums is the one he made just before his “comeback” and that was with arranger/conductor/trumpeter Palle Mikkelborg MORE THAN YOU KNOW (1975 on Steeplechase in Copenhagen) —- Notwithstanding his 1940s recordings that Bobby Bradford asserts were very important in the early bop days —- photo by Mark Weber — December 23, 1976 at The Lighthouse, Hermosa Beach 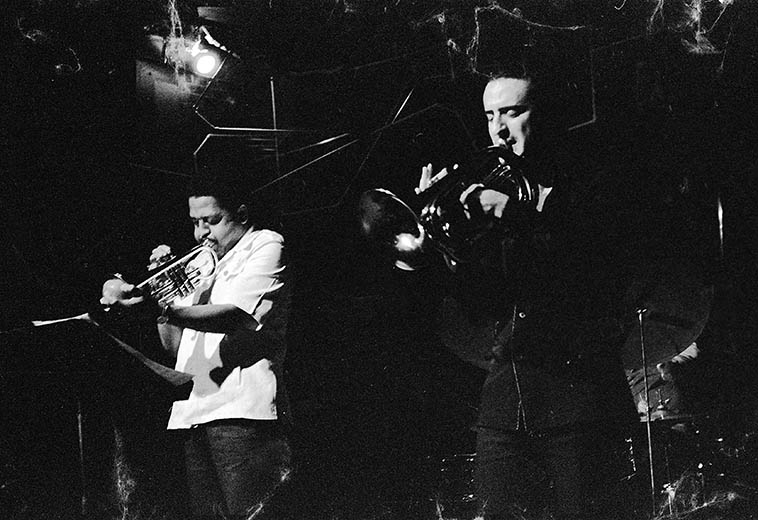 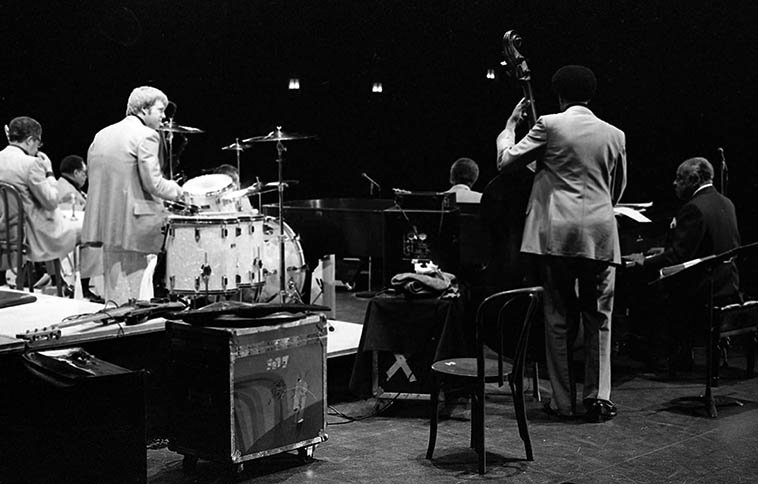 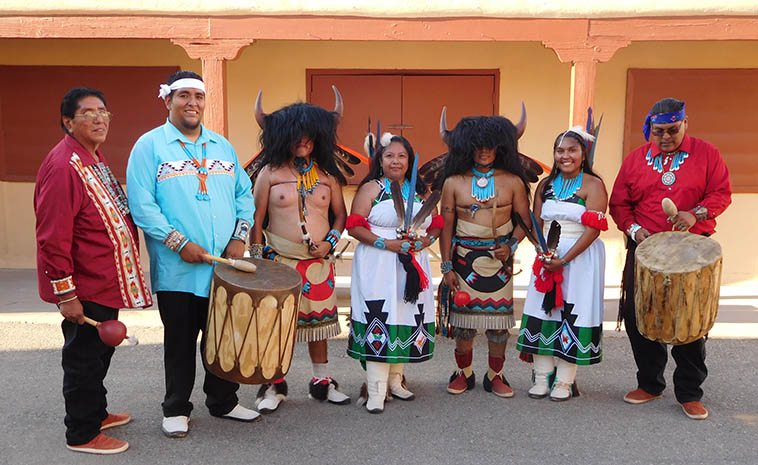 These kids were so sweet, after they had performed their dance, I happened to be walking behind the stage area in the Indian Village section of New Mexico State Fair, when they asked me to take their picture — after all that preparation and the very involved dance they wanted their picture —- They had been introduced as Jemez Pueblo dancers but they explained to me that they are actually from Zuni and that their neighbors at Jemez were having ceremonies this week and couldn’t be at the Fair, so the Zuni dancers agreed to dance the Jemez version of the Buffalo Dance for them — September 11, 2017 — photo by Mark Weber 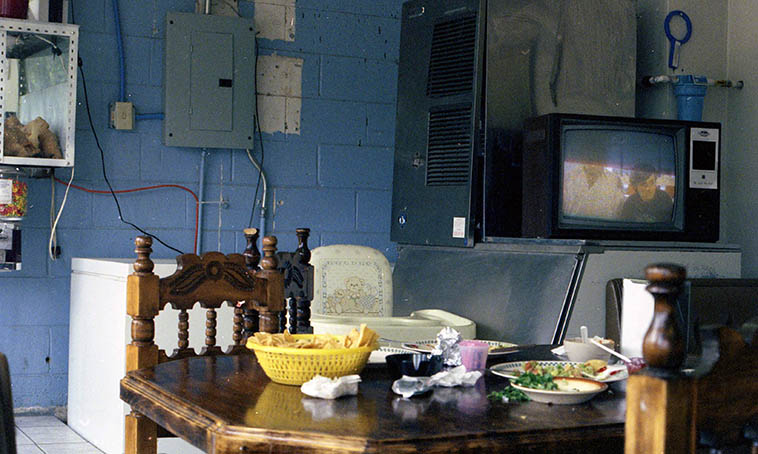