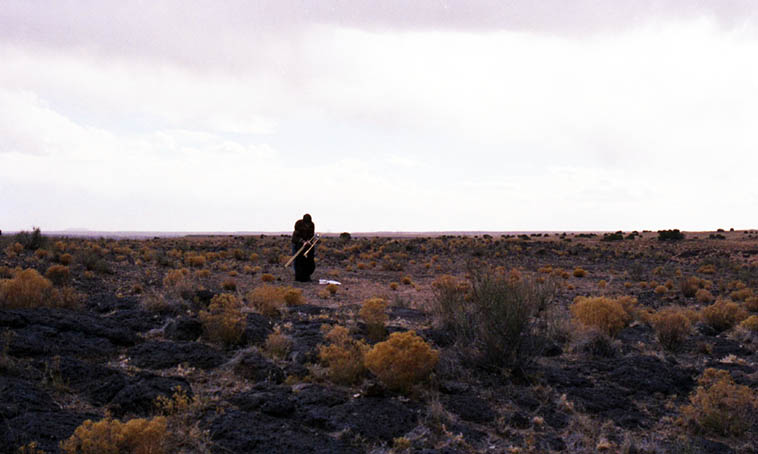 After one of the many concerts Roswell gave at the Outpost Performance Space in Albuquerque we were backstage and Dino (J.A. Deane, trombonist), after formal introductions, says to Roswell, “Man, when I was in school and first heard your records it completely ruined me!” and Roswell’s face went all concerned and he says, “Oh, I’m sorry,” and Dino clarifies that it was liberating and thanked Roswell —– Photo of Roswell Rudd on top of the West Mesa where the Anasazi petroglyphs are —- March 20, 2000 — photo by Mark Weber (that little plastic water bottle in the photo I still have sitting on a bookshelf here at 725) * I think Dino was referring to the albums Roswell made with Archie Shepp, but it could also be Roswell’s own album from 1966 on Impulse EVERYWHERE —- It was the Shepp records that most of us heard first, especially LIVE IN SAN FRANCISCO

When I suggested to Roswell Rudd that we go see the ancient petroglyphs on the West Mesa he was all for it —- He was performing a 2-day run with the Steve Lacy Quintet at the Outpost here in Albuquerque —– So, the next day I go to pick them up in the morning, he and JJ Avenel, and John Betsch, and Roswell comes down from his room loaded for bear, wearing one of those ridiculous wool plaid hunter’s caps with ear flaps and a huge winter coat, I say, Roswell, it’s chilly out there but not that cold and he adamantly informs me that he knows how cold it is in New Mexico and readjusts his trombone strapped over his back like a rifle —– He was a lot of fun to hang out with and very accommodating —- At the petroglyphs he was reverent and after spending quite some time inspecting them he climbed to the top of the mesa to perform a ceremony on his trombone to the petroglyphs and the people who left them over a thousand years ago —-Later, he wrote a large ensemble piece called “Cry of the Petroglyphs” and trombonist Steve Feld chased down a grant to have Roswell come back and play this composition —- Requiescat in pace Roswell Rudd may he rest in peace (got away from us December 21, 2o17) 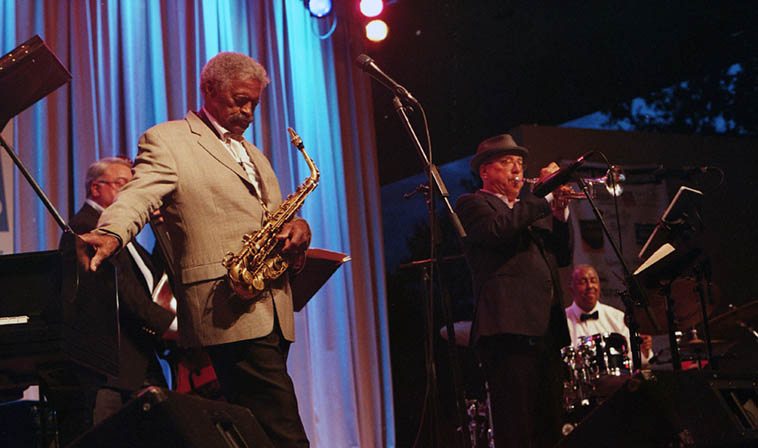 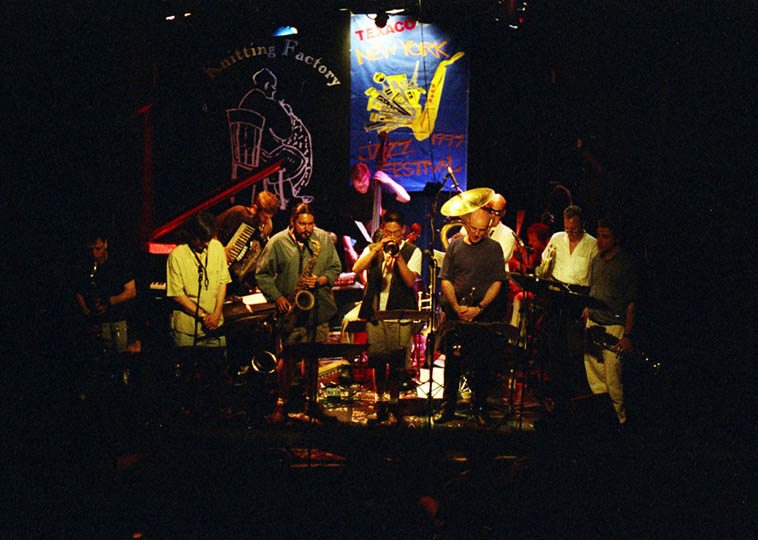 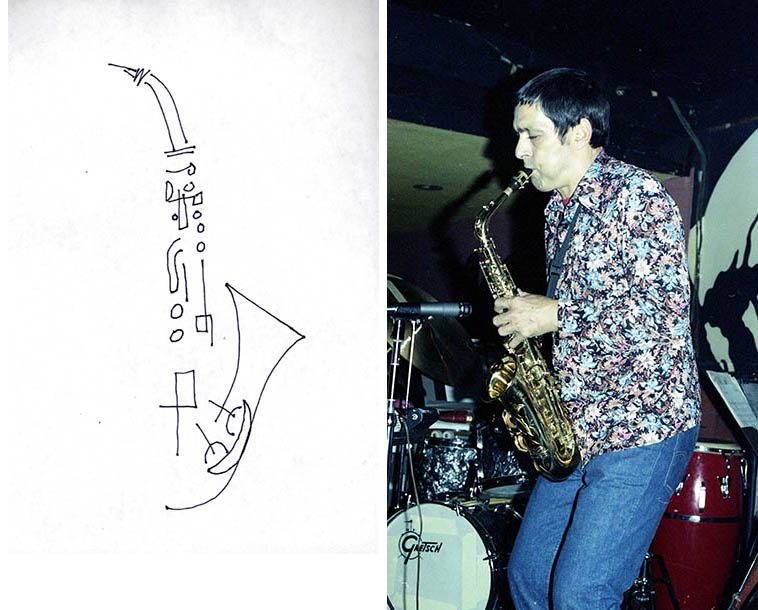 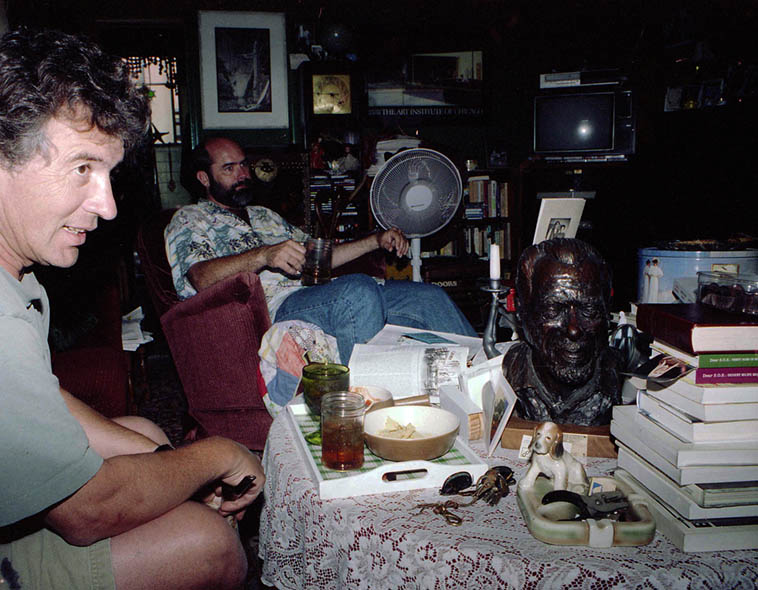 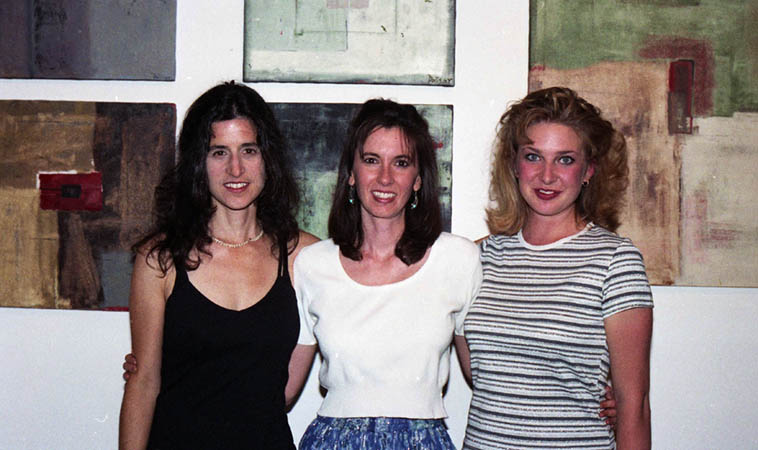 These ladies were the core of my Mark Weber Poetry Band for several years back in the 90s — we made 3 cds ——- That’s Alicia Ultan (viola), Lisa Polisar (flute), and Courtney Smith (Celtic harp) — June 5, 1998 Albuquerque —– I introduced them to each other, and then, later they went on without me, the bums! (I was thinking along the lines of Debussy’s “Sonata for Flute, Viola, and Harp” when I asked them to be my backing band) what a great improvising trio they were, too! (Connie Crothers loved those records) — photo by Mark Weber —– Lisa, we’re going to miss you in L.A. in February! (we hoped she’d be available for a chamber ensemble thing Michael Vlatkovich has composed for my book NIGHT RIDERS) but, Lisa now lives in Oakland and is in graduate school, and she is now Lisa Towles (in case you need an ace flute player) 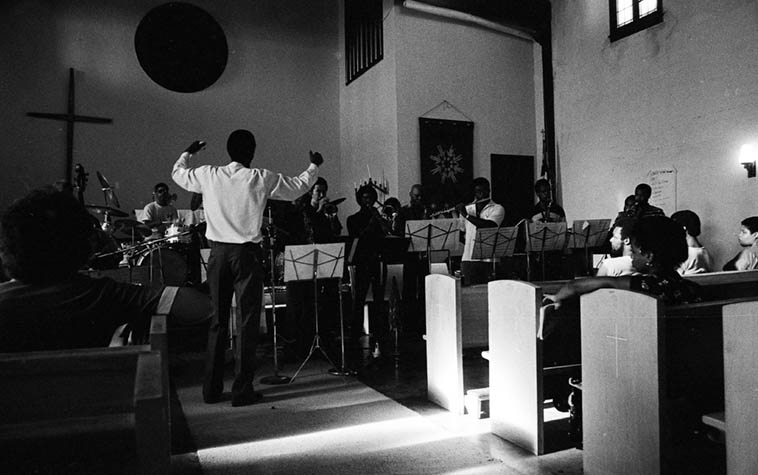 Horace Tapscott conducting the Pan Afrikan Peoples Arkestra — August 30, 1981 at I.U.C.C. —- We await the release from Nimbus West of Vol. 2 from the years PAPA played at the church — Los Angeles — photo by Mark Weber 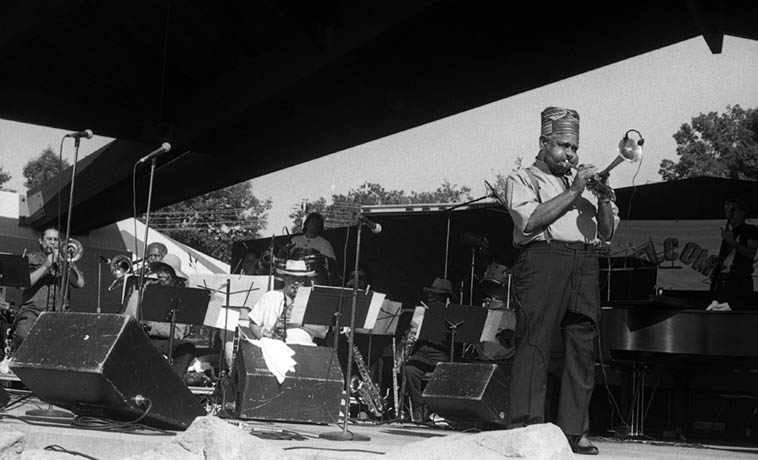 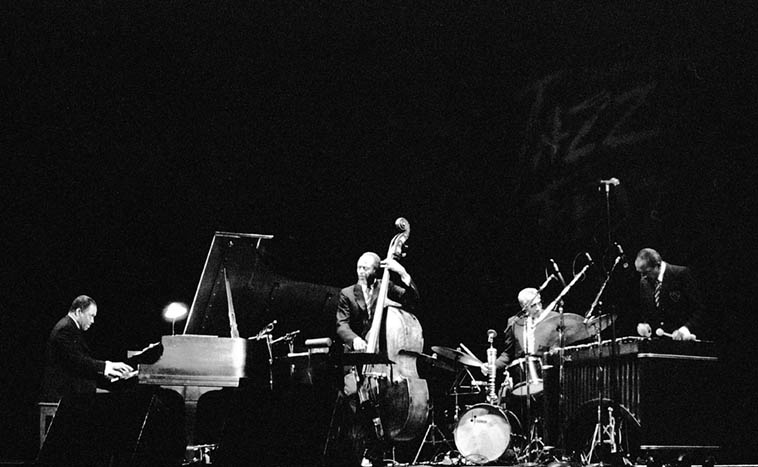 The MJQ were the headliners at Tri-C Jazz Festival, Cleveland — April 10, 1987 — And several other pianists had played this night at the State Theater, but when John Lewis sat down I thought they must have rolled out a different piano —- His sound was crystalline like clear bell tones, it was astounding the difference — photo by Mark Weber 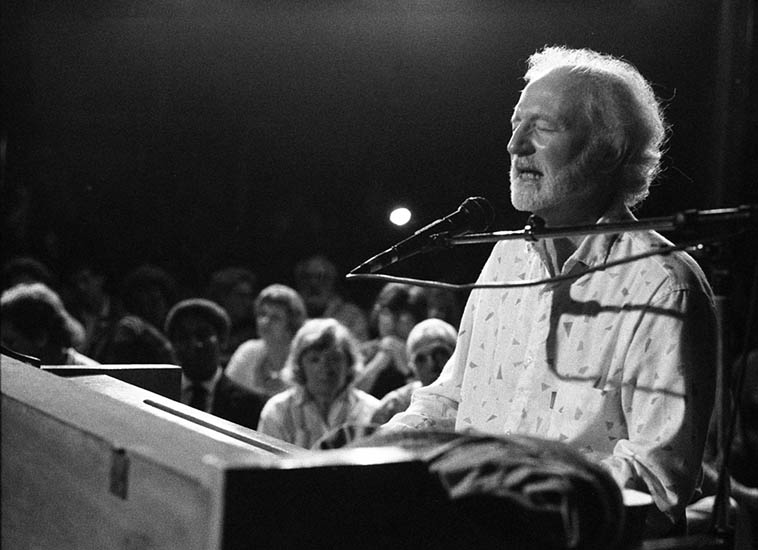 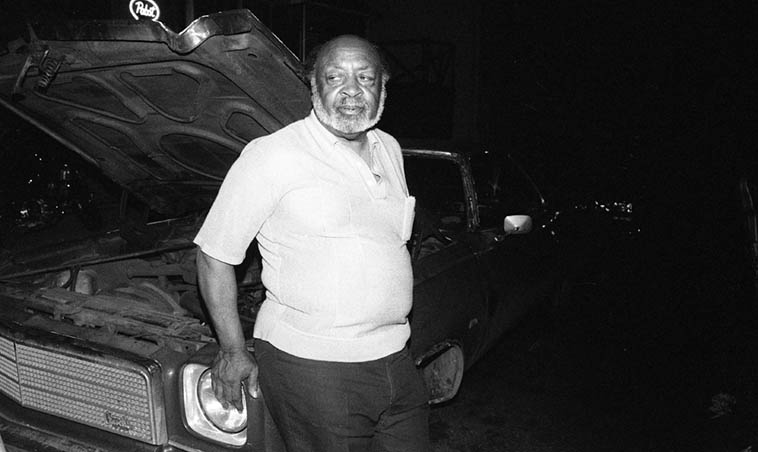 Robert Jr Lockwood didn’t really like photographers but I had only been in town a few days when I shot this picture outside the club he was working that night and didn’t know that —- It came out that I used to work as a garage mechanic so he dragged me out to give him some advice on his old clunker land yacht and so he kinda had to not get weird when I also took some photos — July 31, 1986 Cleveland Ohio — photo by Mark Weber 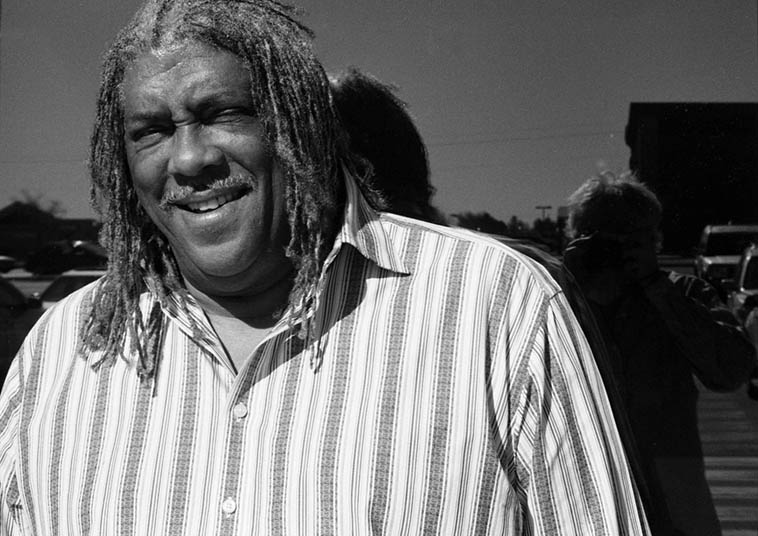 Brother James being photo’d in the bright Albuquerque sun by Mark Weber — February 6, 2o15 — James Newton and I had lunch together many times when he & JoAnn lived here 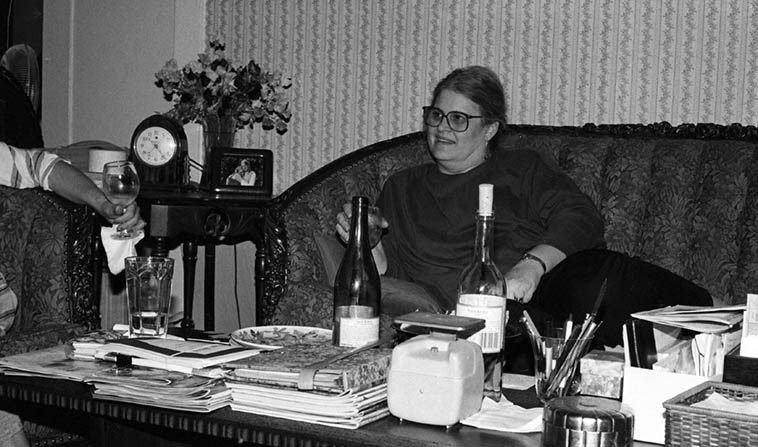 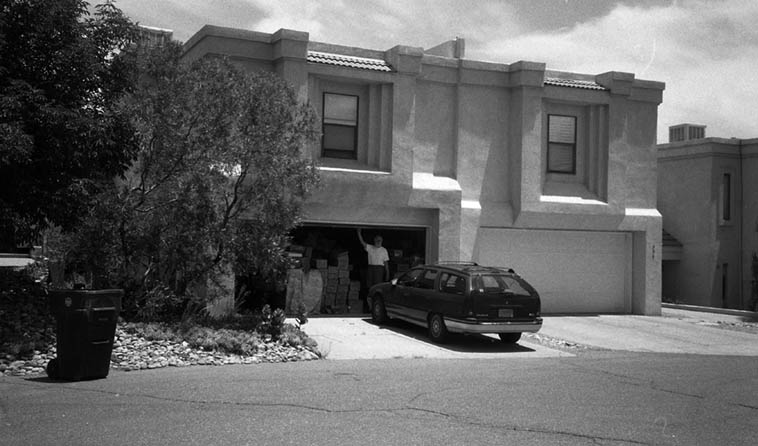 That’s the CEO of Nimbus West Records Tom Albach in the Nimbus warehouse of his home in the Four Hills neighborhood of Albuquerque (those boxes are all CDs & LPs) —- He & Pat arrived here from Vegas on July 25, 2000 and he loves the fresh air, they live in the foothills and on his morning walk claims the air is quite invigorating and responsible for his long life —- He turned 92 on December 13th —- If it wasn’t for the European market his record company would be in dire straits —- He recorded 26 hours of solo Horace Tapscott and only 8 hours has been released across eleven volumes (a lot of the unreleased material is standards but Tom doesn’d care for Horace’s work in that direction (I myself am nuts about Horace’s abstracting of standards, this is the music he grew up with and knows intrinsically) — photo by Mark Weber — June 11, 2o12 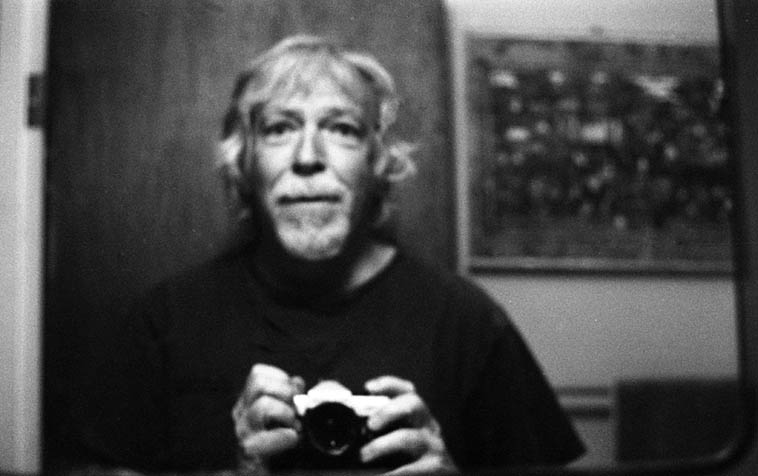