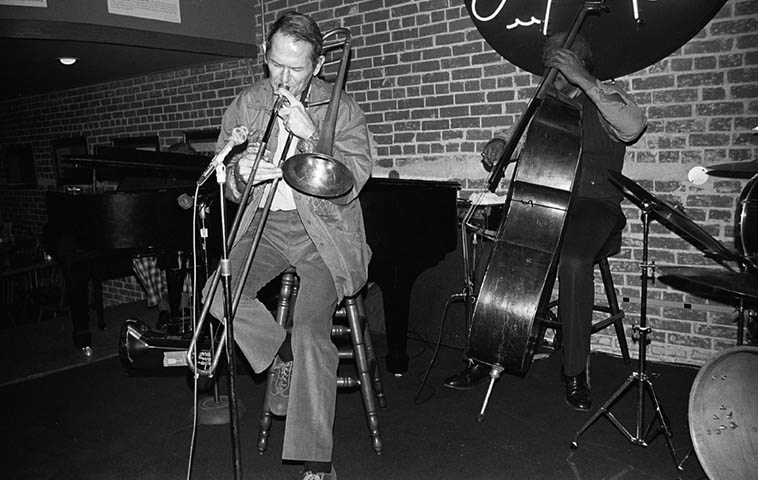 Jimmy Knepper with the Joe Albany Quartet at The Lighthouse Cafe, Hermosa Beach, California — December 3, 1981 with Leroy Vinnegar(bass) and Donald Bailey(drums) — photo by Mark Weber — Jimmy Knepper (1927-2003) was born and grew up in L.A. not far from the Hi-De-Ho Club where Charlie Parker had a gig March 1 – 13, 1947) and was part of the young scholars that followed Charlie around on the Coast, and as the story goes he and Dean Benedetti would transcribe Bird’s solos, and according to Phil Schaap’s thoroughly engrossing scholarly notes on the recordings from that club (emphasis on “thoroughly”), Dean had a band that included both Joe Albany and Jimmy Knepper at that time —- See booklet for Mosaic’s box COMPLETE DEAN BENEDETTI RECORDINGS OF CHARLIE PARKER (1990)

It’s time travel to look or hold any one of these talismans
It’s not “remembering,” it’s a time travel to that place
Some people have the gift of seeing the past, the rest of us
visit graves, old historic bridges, the mound of Babylon (I hope someday), or
an old oak that escaped being cut down to build the Spanish Armada
Or a grove a yew trees that could be related to the ones that made the long bows
William the Conqueror used to invade England 1066 (yew wood is long-grained,
therefore longer bows, more projection)
Keepsakes and touchstones, talismanic, what is it
we gather from these pilgrimages to the past?
Those moments you read a petroglyph and know what is being conveyed . . . . 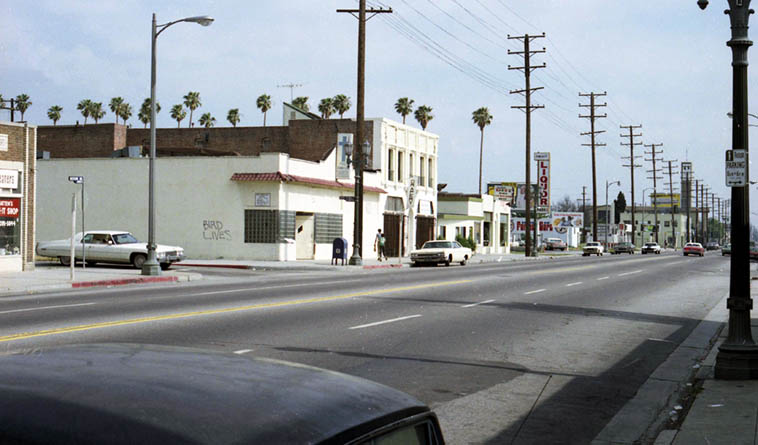 Club Hi-De-Ho at 50th & Western, Los Angeles — 1977 when it was the First Evangelical Church — photo by Mark Weber 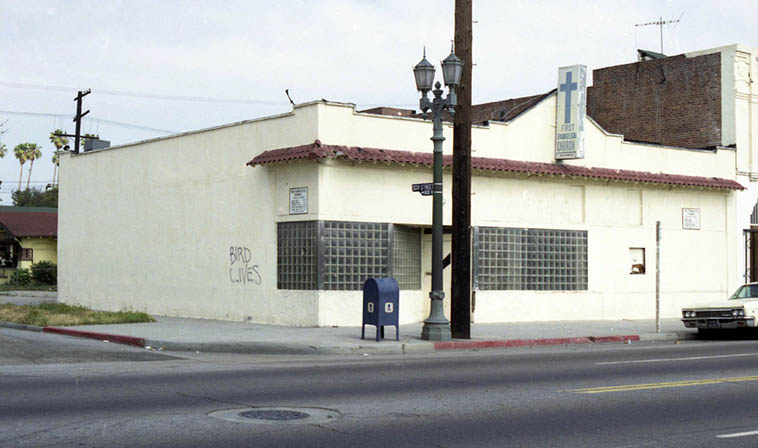 Site of the old Hi-De-Ho Club —- This is a slightly different shot than my photo that appears in THE COMPLETE DEAN BENEDETTI RECORDINGS OF CHARLIE PARKER —- I might suppose that the statute of limitations of guilt and assholeness can be invoked and said asshole can now admit he’s the one who spray-painted “BIRD LIVES!” on the side of that church back in 1977 (I’ve only told 2 or 3 people this story) being not too proud of spray painting graffiti, but I was under the pall of Ross Russell’s fanciful biography of Charlie Parker (BIRD LIVES! 1973) and the re-issue at that time of the Dial recordings on Spotlite (remember those mauve/lavender/pink album covers!) and no doubt had been drinking, does that count? Well, it gave me courage, I’ll say, as vandalism is way outside my skill set and comfort zone, but thinking back: Why did I have a can of spray paint in the trunk of my VW? Does this mean I pre-meditated (a strange choice of words from the legal profession) this act of unholy reverence for Bird? It was very late at night, I had been in one of the blues clubs in Watts (more correctly known as “South Central” nowadays) probably listening to Pee Wee Crayton as these frames are on the same sequence of negatives . . . . Bars close at 2am in Los Angeles, on my way home I drove over and did the deed, then a few weeks later came by and snapped a few photos in the broad daylight —- My wife asked, “So, what else did you graffiti?” Just the inside of my skull —- Am I absolved? I kind of doubt it, as a person has to live with oneself in this mortal coil, and I’m not Catholic so a confession has not helped, St Peter probably maybe just might let me in? After all Charlie Parker is in Heaven —- BUT it do make a nice picture, no? And look at that lamp post! That very lamp post probably now resides at LACMA in that regimented line-up of 202 restored 1930s lamp posts created by artist Chris Burden (“Urban Light” 2008) —- Some time shortly after taking my photo I gave an 8×10 B&W copy to my friend Bob Porter of the BOSTON PHOENIX and it was he who gets credit for getting that photo to Mosaic, which is the absolute most perfect place for it to be 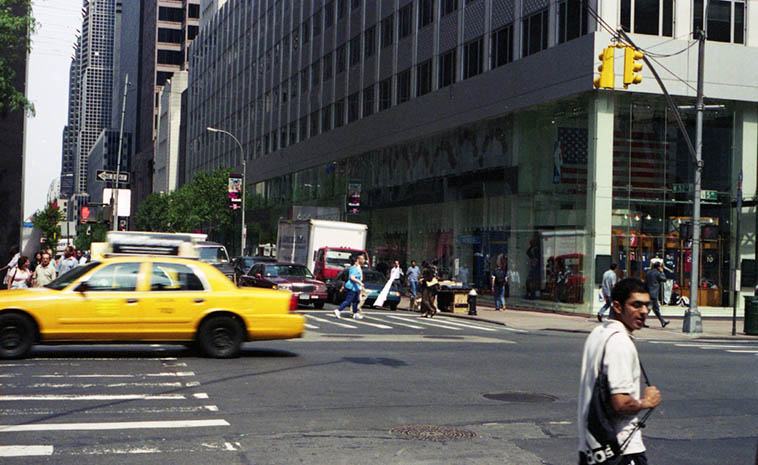 No, I did not graffiti anything on this hallowed block — 52nd Street at Fifth Avenue looking west toward 6th, which is where Bird landed immediately after his 15-month sojourn (December 1945 – April 1947) in “Lotus Land” as Ross Russell has it — photo by Mark Weber — July 2, 2003 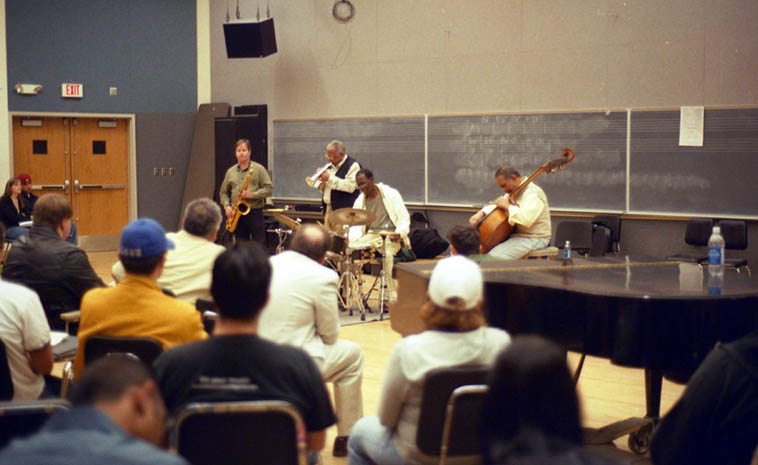 Bobby Bradford has spent a lot of his life in classrooms, you could say it’s his natural habitat as he’s a real teacher (emphasis on “real”) —- University of New Mexico special clinic that Tom Guralnick of Outpost organized —– Chuck Manning(tenor), Bobby(cornet), William Jeffrey(drums), Roberto Miranda(bass) — April 13, 2004 — photo by Mark Weber 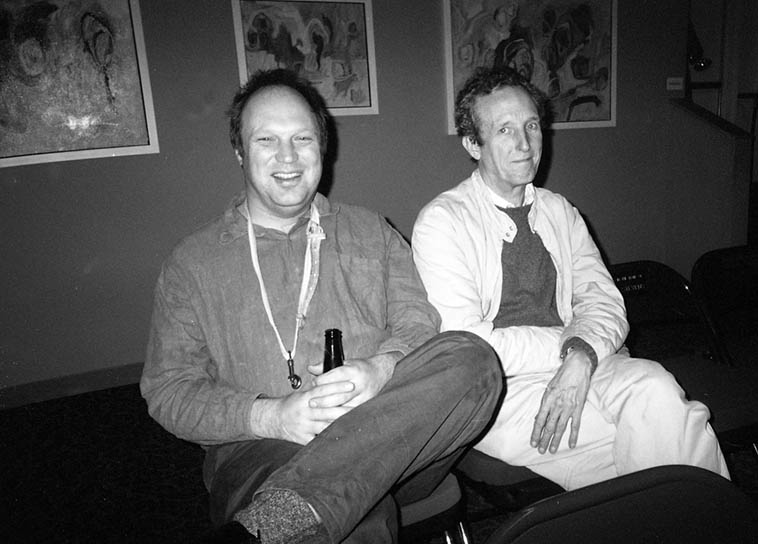 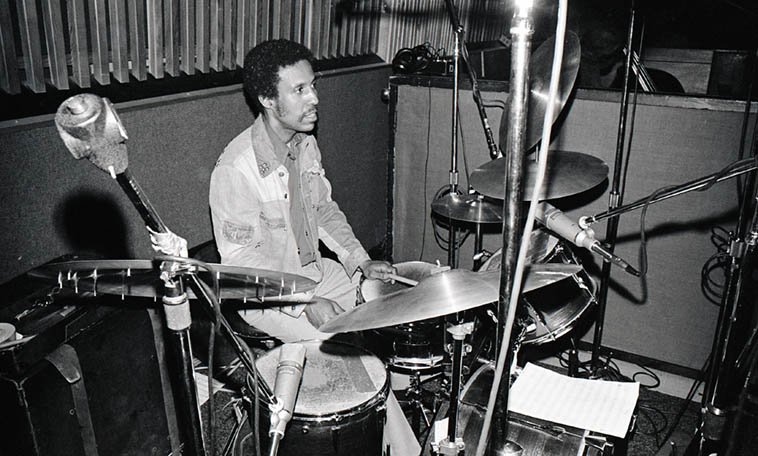 Everett Brown Jr worked with Horace Tapscott since 1964, “Real steady 1964 – 1975.” He returned to his hometown of Kansas City in May 1975. During his years on the coast he played with Charles Kynard, H. Ray Crawford, Jimmy Smith, Esther Phillips, Sonny Stitt, John Handy (early 60s in Oakland), and private sessions playing with Eddie Moore. Also, mid-60s played two week engagement at the It Club with Harold Land-Hampton Hawes group, and is the drummer on Sonny Criss Lp SONNY’S DREAM (Prestige). Tom Albach calls him “the greatest supportive drummer around.” Taught at the Charlie Parker Foundation in KC November 75 through October 78. His group in KC was called SLICK. —– This is him at United-Western Studios — April 29, 1980 — photo by Mark Weber —- Everett would travel to L.A. whenever Horace needed him, usually for these recording sessions [quotes are from conversations at this recording session] 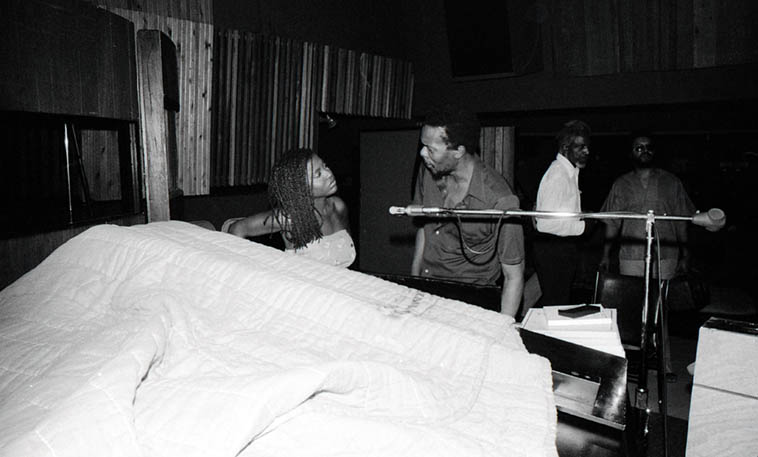 Lorelei and Horace Tapscott (behind them is David Bryant and Michael Detts Wilcots) at United-Western Studios — Lorelei at this session to sing “Prayer of Happiness” for the cd I WANT SOME WATER cd — May 3, 1980 — photo by Mark Weber 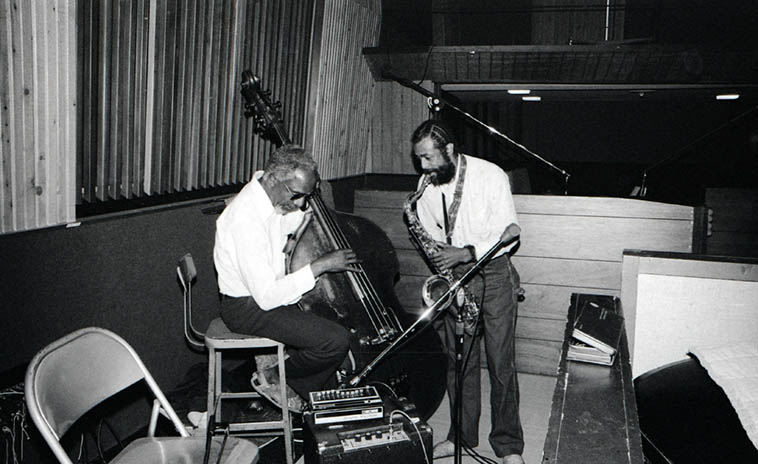 David Bryant and Billie Harris warming up at United-Western Studios on Sunset for session #2 that produced the cd I WANT SOME WATER (Nimbus West Records) — May 3, 1980 Los Angeles — photo by Mark Weber 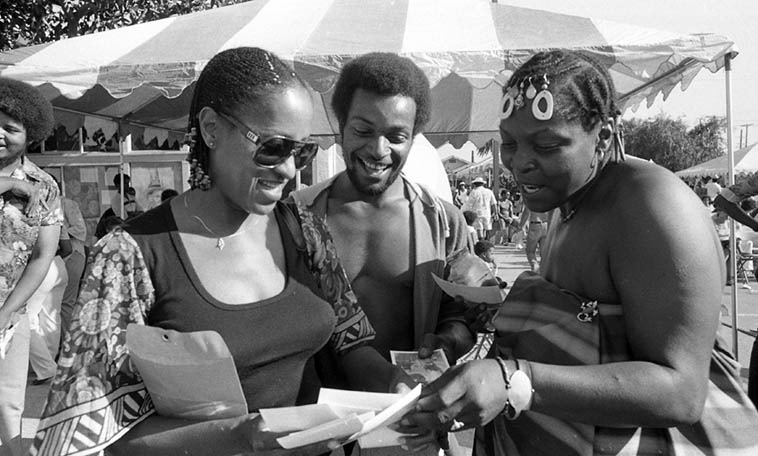 Marla Gibbs and Linda Hill looking over some of my photos that I brought for them —- Marla was a big supporter of the Pan Afrikan Peoples Arkestra and, at least on one occasion, sang with the band —- (maybe someone can identify the guy?) —- (Marla was the maid in the TV series The Jeffersons, as well, she owned Marla’s Memory Lane jazz club) —- July 5, 1980 Watts Towers Jazz Festival —- Linda was co-pianist in PAPA — photo by Mark Weber 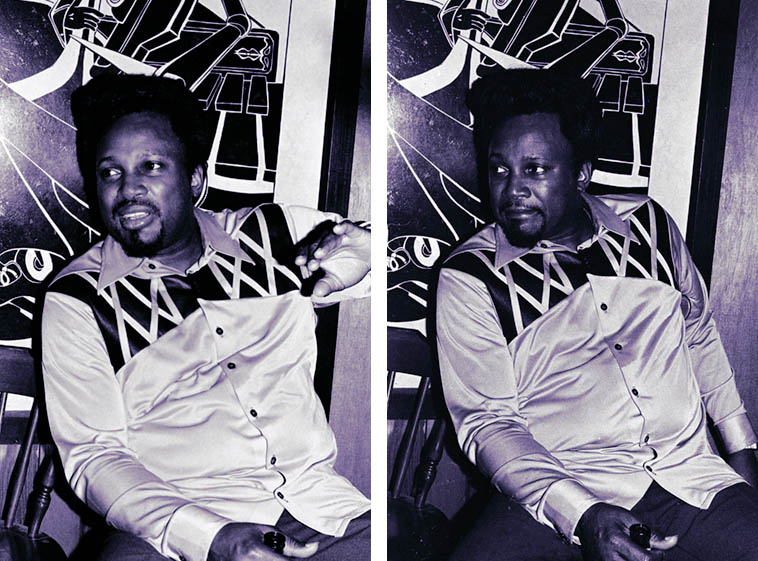 Otis Rush backstage at The Lighthouse, Hermosa Beach — one of the all-time greats of post-war electric Chicago blues visiting California — May 14, 1977 — photo by Mark Weber 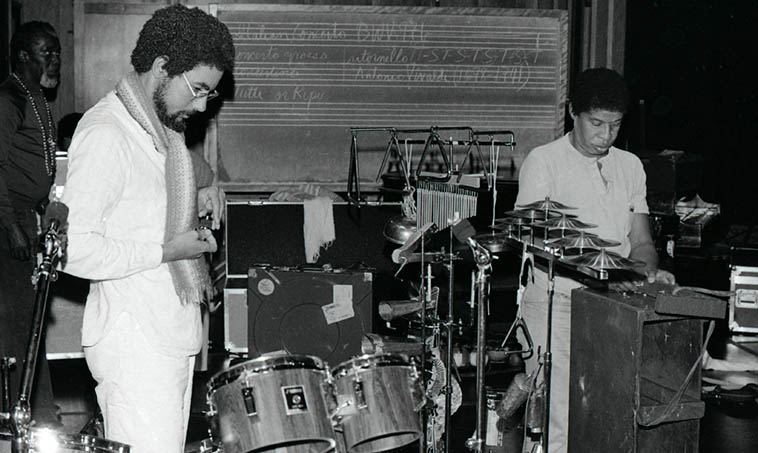 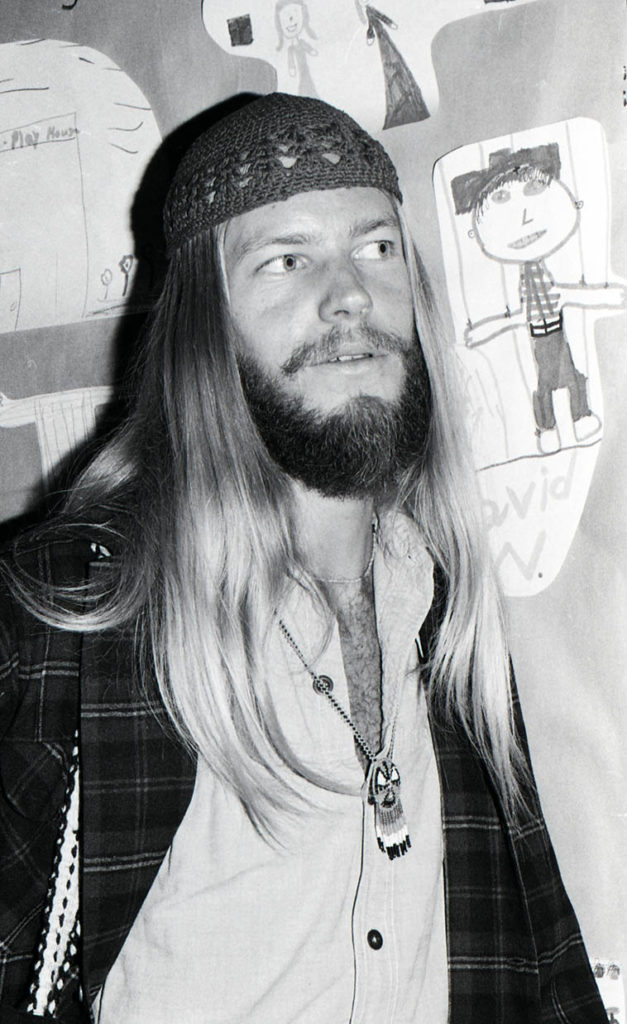 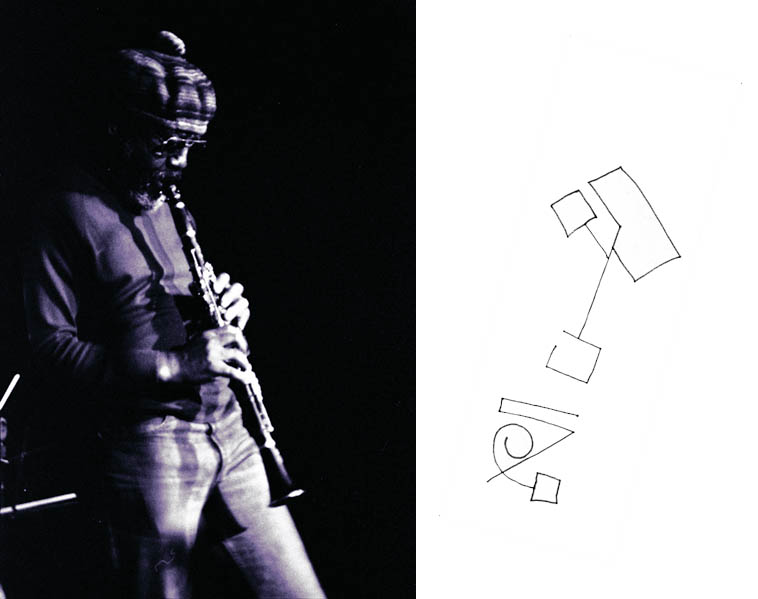 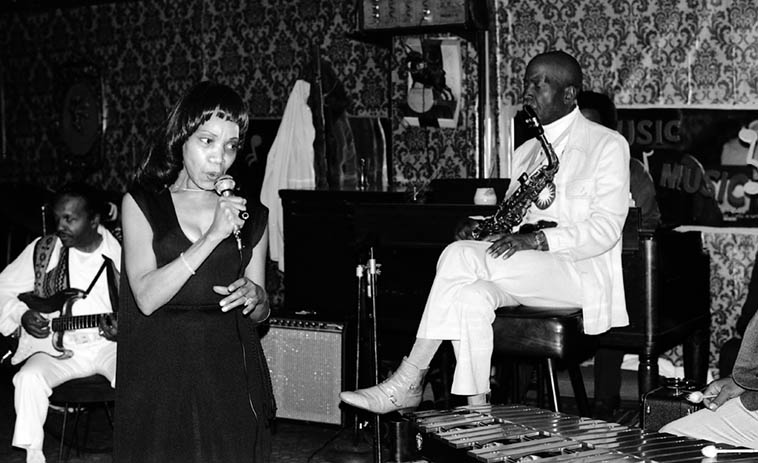 Barbara Wells sitting on a Saturday night at The Rubaiyat Room, 1400 S. Western Avenue, Los Angeles, with the Blevins Brothers & Eddie Cleanhead Vinson — Leo Blevins, guitar (who you can hear on the Beehive sessions of Max Roach & Clifford Brown) — March 5, 1977 — photo by Mark Weber —- That was one of the beautiful things about clubs in South Central L.A. those years, was that the working bands let folks from the neighborhood sit in, many is the time a family at a table would push their mother or grandmother on stage to sing one, always good fun, and almost always quite good, no complaints from my table (Note: the 1400 block of Western Avenue is not technically in “South Central” as it is a few blocks north of the I-10 freeway) 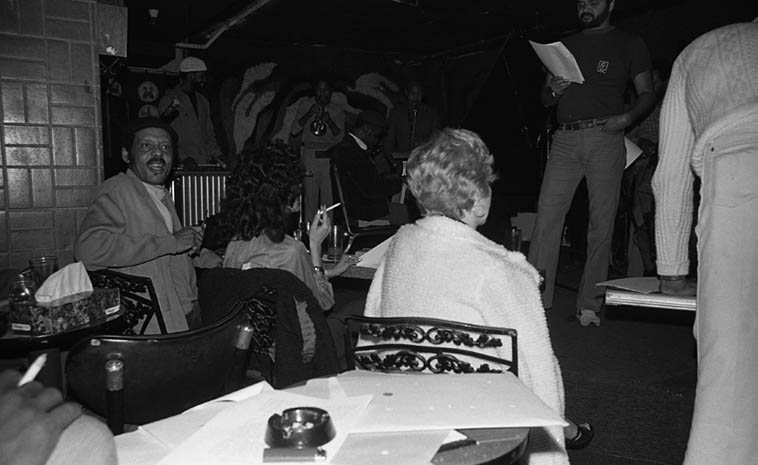 I’d get my camera ready and then give a shout “Hey, Ernie” and when he turned around I snapped —- Ernie Andrews at Maiden Voyage, downtown L.A. watching a Harold Land group rehearse for gig that night — January 25, 1982 — photo by Mark Weber —– Maybe we’ll listen (again!) to his version of “On Broadway” which just kills me, Ernie Andrews is a great jazz singer 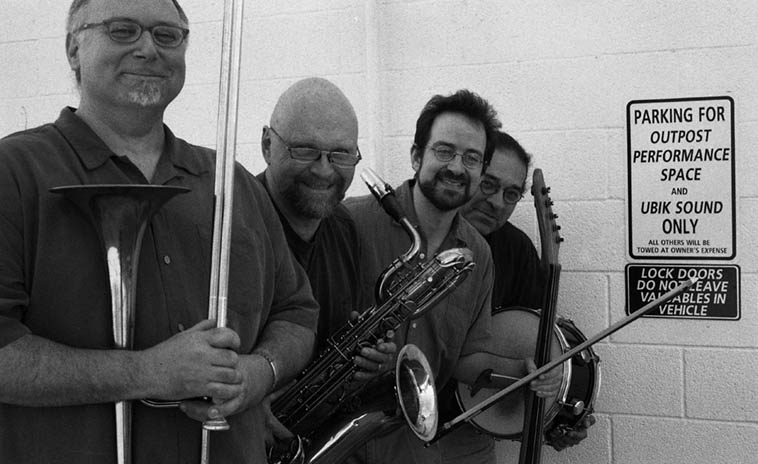 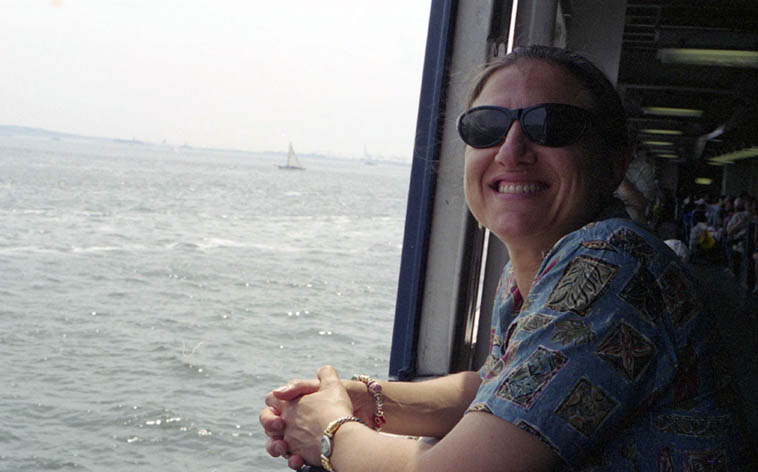 My wife Janet on the Staten Island Ferry — July 2, 2003 — photo by her husband — This day (January 18) is her birthday, I have a special track to spin for the occasion