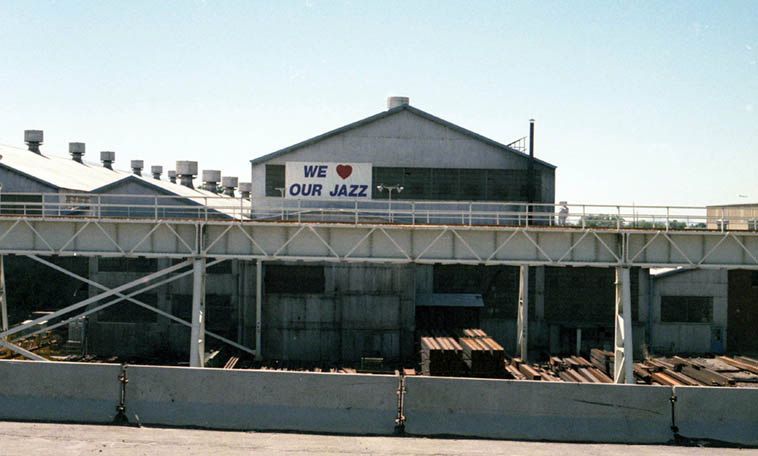 There’s a lot of good and interesting things about Utah, but jazz is not one of them, and that’s because there is none, zero, not unless jazz to you means a basketball team —- I sure hope jazz doesn’t disappear from New Mexico, there’s presently a downturn that has me concerned, the Trump Effect I call it —– I remember in my younger days reading Ed Abbey’s great books when he said that jazz doesn’t seem to fit the wilderness or desert and mountains, that it’s a city music, and I took umbrage at that — Over time I came to realize what he meant, but jazz is adaptable —— Photo May 5, 1990 shot from moving car, Salt Lake City, when we lived there two years as Janet interned at the VA Hospital —– photo by Mark Weber

JAZZ ON THE RADIO

wHy jAzz oN the RAdio?

Because there are people out there that care about it.

I suppose you could say that a certain type of listening is going on by a certain type of person, who likes hearing down into the music, likes to hear how the parts all fit together, they enjoy rhythmic layering and melodic invention and playful abstraction. Take a Gershwin song and put a Latin beat on it. Elongate a Richard Rodgers tune and stretch Larry Hart’s lyric. Have a drink with Harold Arlen while Joe sets ’em up again, and Johnny Mercer thinks about it. Or even write a new melody over the changes of another song.

When I was coming up Top 40 was in its heyday on the radio. There was a lot of great music in that realm, but it wasn’t everything. I wasn’t exactly ready for classical music, yet, (Joseph Haydn symphony No. 101 is on the radio right now as I sketch these notes —- in “longhand” on a clipboard —- on the Performance Today broadcast this morning over KUNM) but as a kid I might have needed a little bit more overt rhythm. Or, as Jack Black says in SCHOOL OF ROCK: “melt your face guitar solos.” I didn’t know it yet but I was ready for Archie Shepp melt-my- face-saxophone-solos. That took radio. First time I heard Bird was off a radio. And then just about the time I got out of high school (1972) this new band Supersax was getting a lot of airplay in Los Angeles and they played nothing but Bird. You know, it’s an adventure turning on your radio. Like Bob Dylan says in his memoir CHRONICLES, we’re “musical expeditionaries.” You turn on that radio and you’re on an expedition, you follow the music upstream. 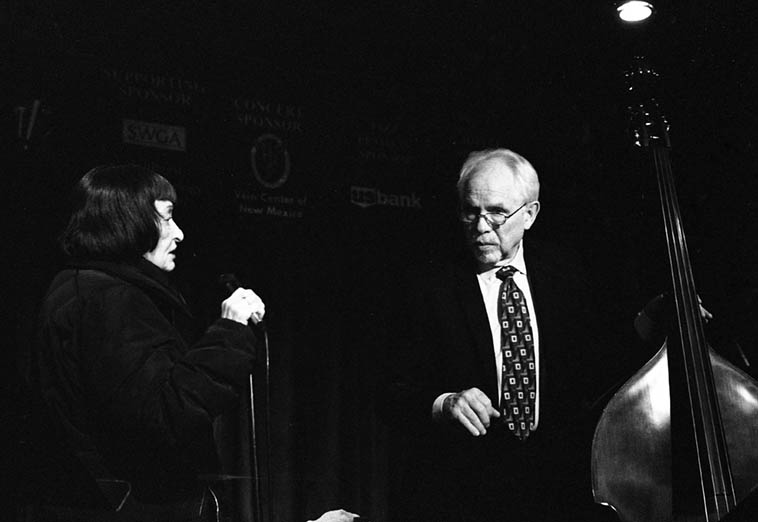 Sheila Jordan & Cameron Brown at soundcheck — Outpost Performance Space — March 5, 2o15 Albuquerque — photo by Mark Weber ————- Tune in today to hear me ask the immortal question: Why is it a good thing to have jazz on the radio? and hear what Bobby Bradford, Virg Dzurinko, Anthony Ortega, Sheila Jordan, Buell Neidlinger and others had to say in response: They all seem to think it’s a very good thing. 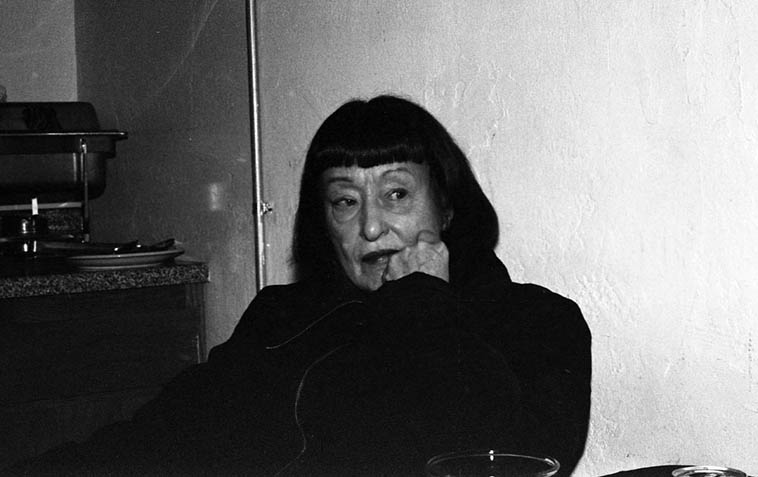 Isn’t she fabulous — And beautiful inside and out — Sheila Jordan — March 5, 2o15 — We’ve posted this one before, but, it’s so good that we’re putting it up, again — photo by Mark Weber 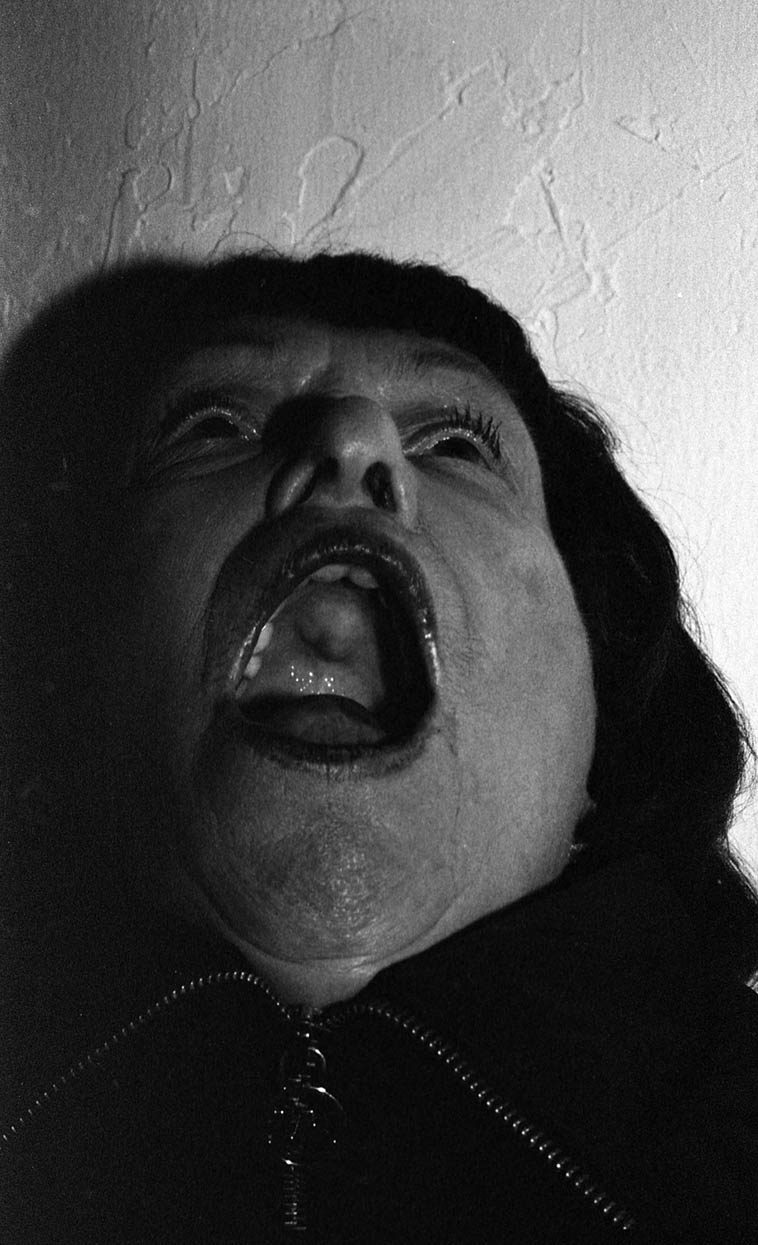 Sheila Jordan has a torus bump — a little protrusion on her palate — When I told her that in anthropology that that is a solid indicator that you have Native American blood, she related how her great great great great grandmother was Queen Aliquippa of the Seneca tribe of Pennsylvania —– Her and Cam were backstage at Outpost waiting to go on (she calls him “Cam” — I call him Mr Cameron Brown) when I snapped this photo — March 5, 2o15 — photo by Mark Weber 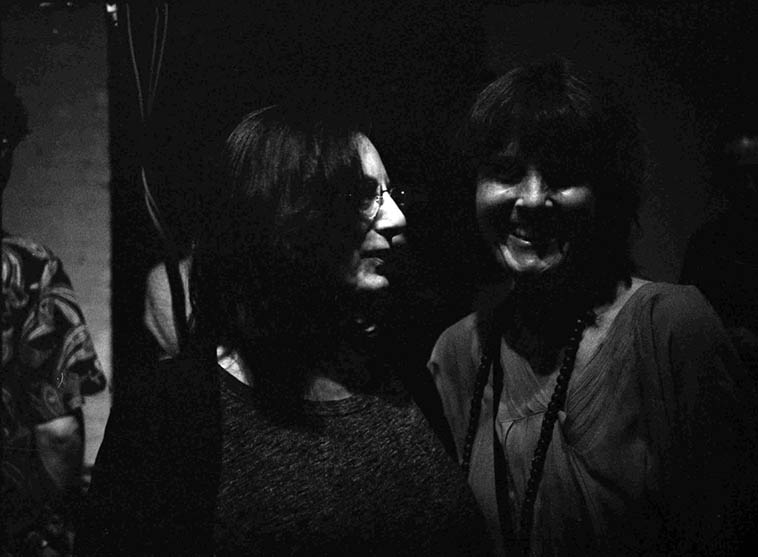 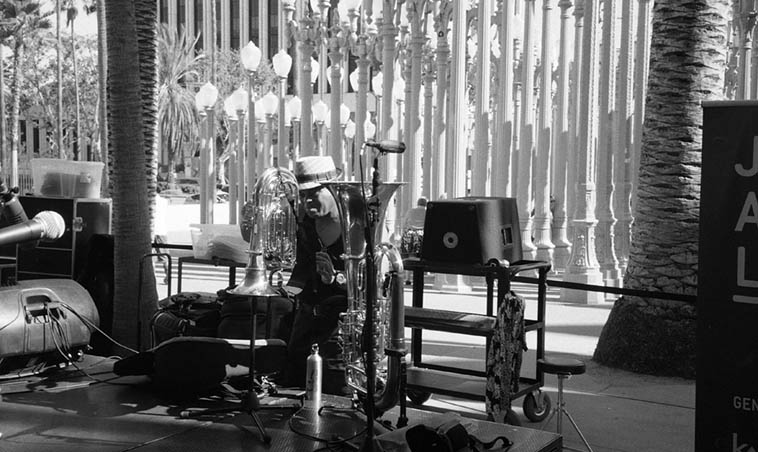 William Roper and his tubas — L.A. Country Museum of Art — August 14, 2015 — as part of Bobby Bradford’s Tete-a-Tete band — photo by Mark Weber —– William has worked equally in symphony music as well as modern jazz —- My earliest remembrance of classical music in any serious way is Tchaikovsky’s Nutcracker Chicago Symphony conducted by Frederick Stock —– somehow these three 12″ 78rpm disks came into our household when I was very young and I listened to them to the point where I have the Nutcracker memorized to this day, those three records plus another of Liszt’s Hungarian Rhapsody conducted by Leopold Stokowski (I still have these in my collection) are dug deep into my memory 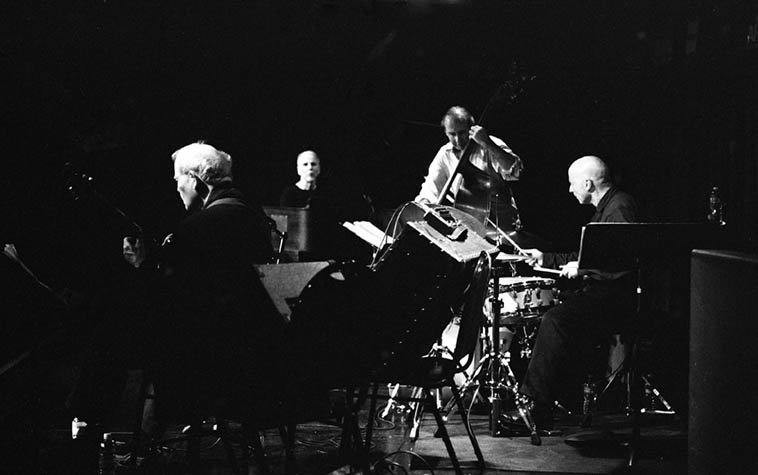 I’m not sure I had heard Marc Copland before this concert, but John sure knew how to pick them, Mr Copland’s piano is something way worth checking out —- John Abercrombie Quartet at the Outpost — April 9, 2o15 — Drew Gress (bass), John (guitar), Marc(piano), Joey Baron (drums) — photo by Mark Weber —– Nowadays, old-fashioned radio is called terrestrial radio, as new developments such as “streaming on the web” have come about —- it’s a great time to be in radio as stations have world-wide reach via the dual broadcast systems of both terrestrial and the internet, and if you miss a show in “real time” you can always access the archive —- We’ll look around for something to play from this marvelous band 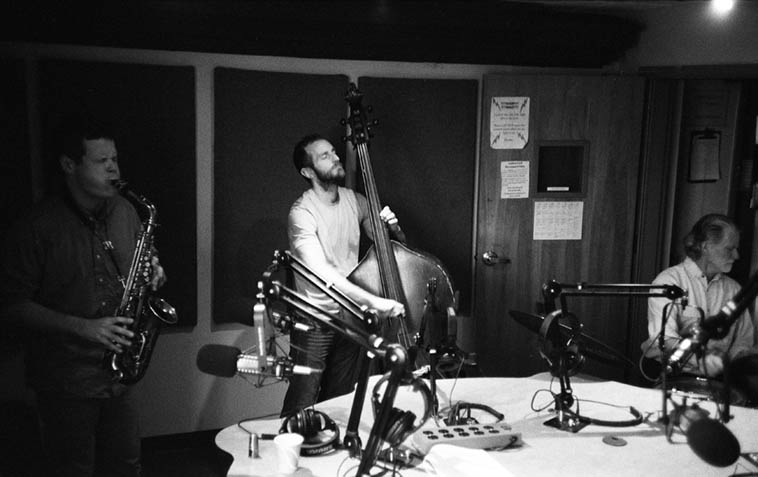 One of the hippest uses of the public airwaves on a music program is to let the artists speak for themselves, or, better yet, let them play Live and free —– that’s New York saxophonist Nick Lyons on one of his frequent visits to the station playing with local A-team Colin Deuble (bass) and Cal Haines (drums) — on the Thursday jazz show December 29, 2o16 — photo by Mark Weber 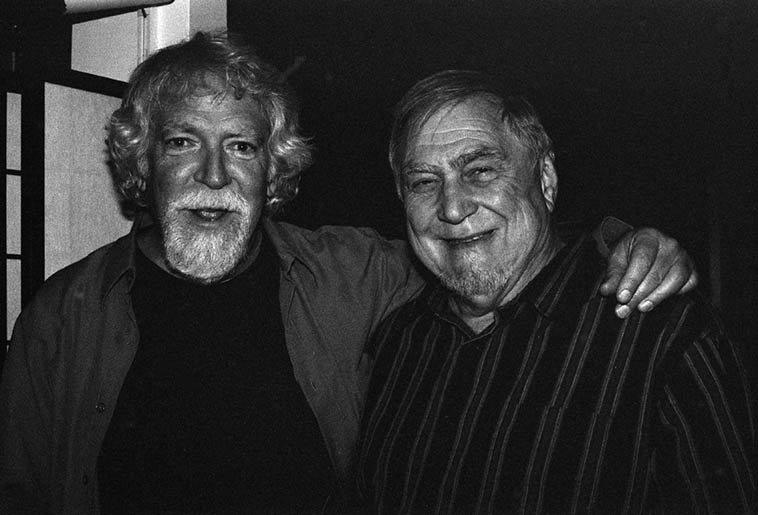 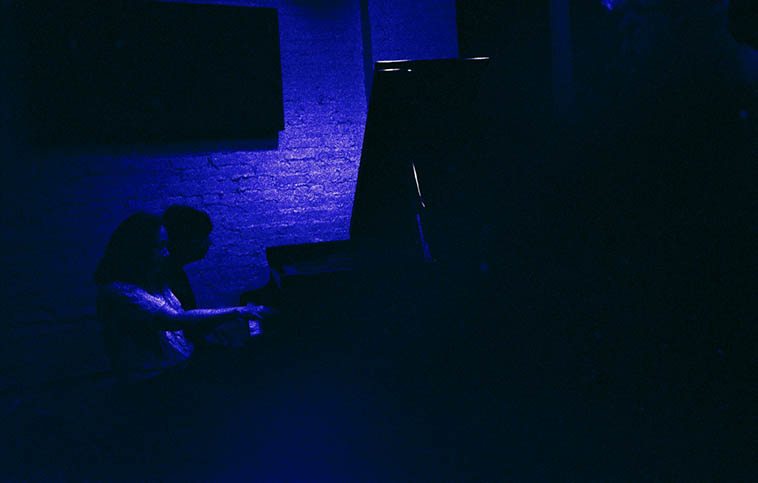 Virg Dzurinko & Connie Crothers at dusk —- May 11, 2o15 @ iBeam, Brooklyn — photo by Mark Weber —- In my youth, I didnt have any music mentors or anyone to point the way, all I had was radio 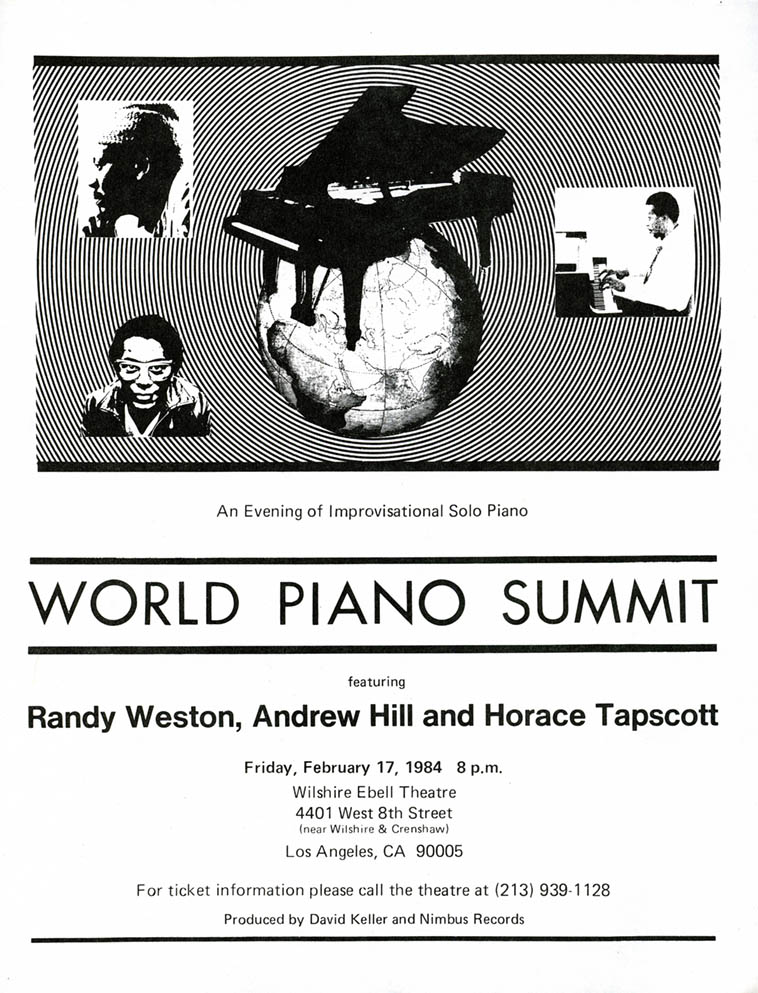 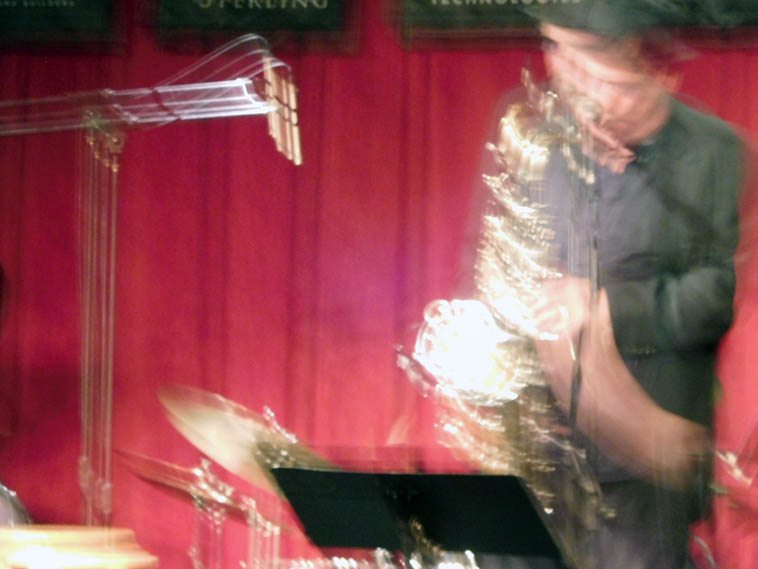 I never could get that little shirtpocket digital camera to work right, so it’s gone —- Some of the shots are variously interesting (for a minute) this one looks abstract expressionist —- saxophonist Doug Lawrence — Albuquerque April 20, 2o17 — photo by Mark Weber 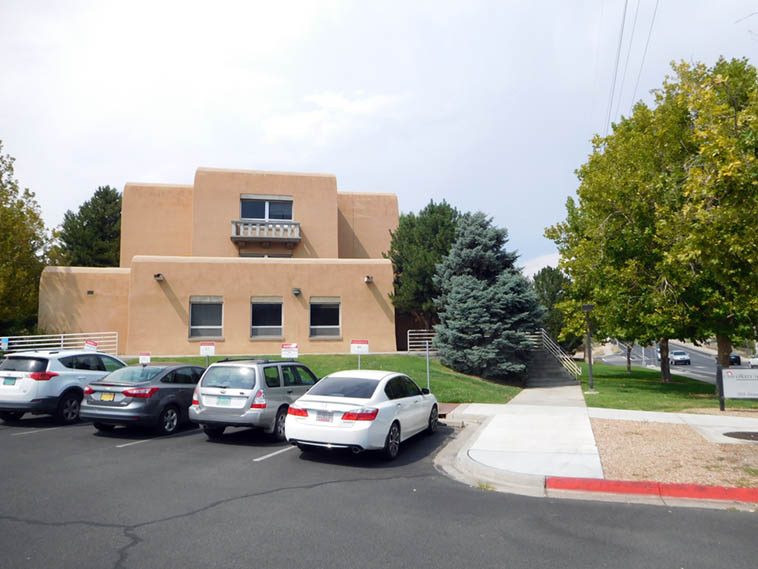 Onate Hall, University of New Mexico —- that top floor is where KUNM is located — September 7, 2o17 — photo by Mark Weber 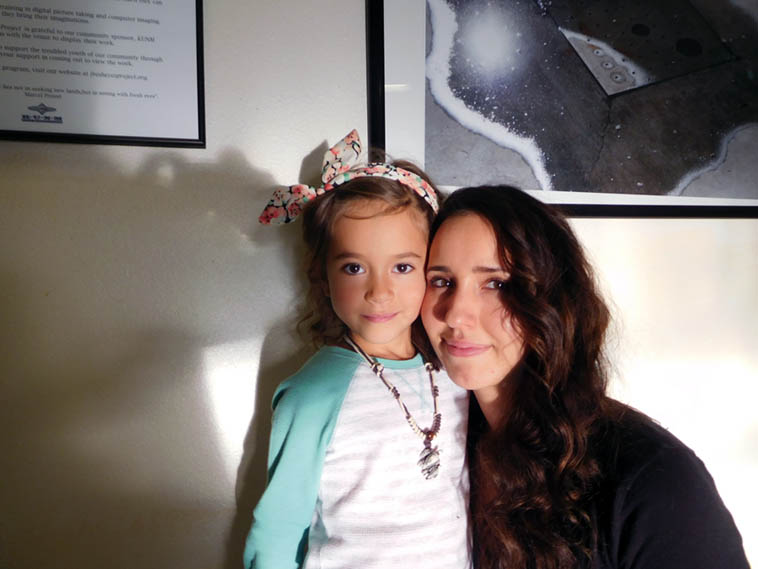 I get off the elevator and there’s Maiya on a skateboard, always a relief to know we have children coming up through the ages at KUNM —– that’s Maiya with her mother Erin Brown who is Account Executive for Nonprofits at the station —- the monster in the shadow with a camera is me — December 2o17 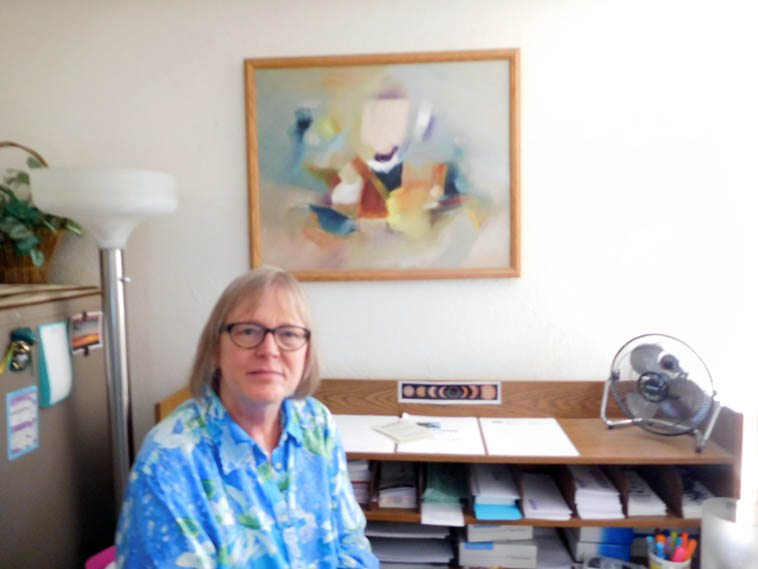 A slightly blurry Membership Accounts Exec Cris Nichols in her office at KUNM with painting by her mother — September 7, 2o17 — photo by Mark Weber with camera he has since tossed out the window — Her father Wayne Nichols played trumpet in Charlie Barnet’s band, and in Bob Wills Texas Playboys! 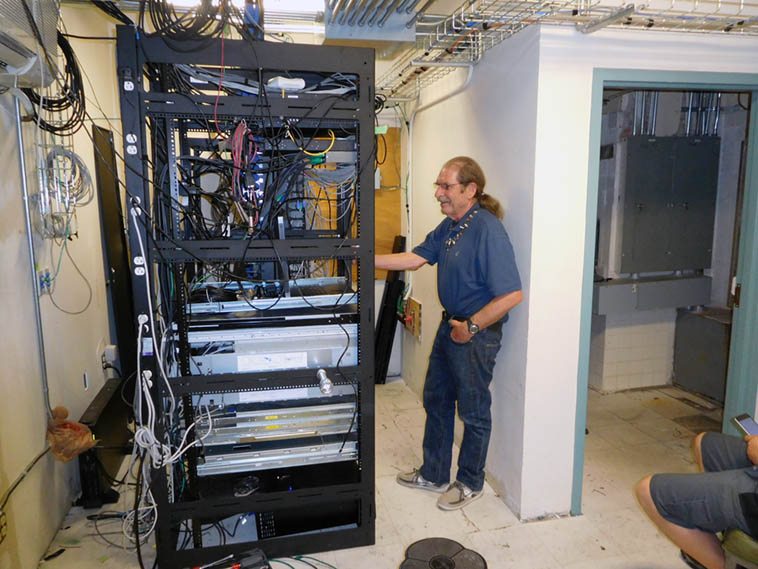 The central brains of KUNM — (the machinery & wires, not Jonathan — haha) and that’s Jonathan Longcore the KUNM I.T. (which I’ve been told means “Internet Technician”) — September 7, 2o17 — photo by Mark Weber — Jonathan is a banjo player and went to high school in Palo Alto with Bill Kreutzmann, the drummer for the Grateful Dead 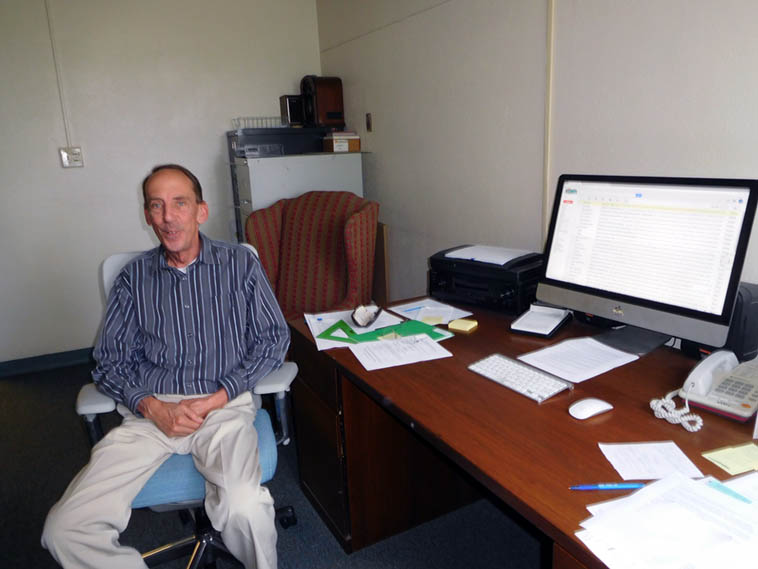 I’ve asked the station manager Richard Towne to be my pitch partner this day which always gives me the opportunity to put him on the spot and ask pointed questions over my pay raise —-(hehe)— September 7, 2o17 — photo by Mark Weber (all KUNM radio hosts are volunteers) 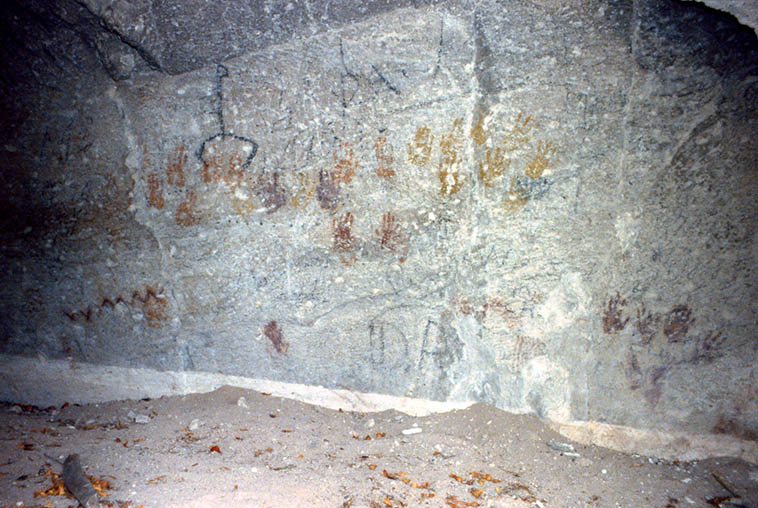 As far back as 160,000 years ago humankind have been using red ochre to illustrate their self-aware existence —- This is the Cave of 100 Hands, Fremont Indian State Park, Utah — April 7, 1990 — photo by Mark Weber — these pictographs date from a thousand years ago, to as far back as 400 AD —- It’s quiet out there —- Listening is an art —- There’s a lot to it, but basically you sit and focus — I tell beginners to listen for the first note, and pay attention to where it all goes in relation to that note —- I also suggest listening with eyes closed —- and if you’re new to jazz try this: There’s a quintet on stage, single out one instrument and concentrate purely on that instrument and how it negotiates within the quintet and everything around it, become that instrument