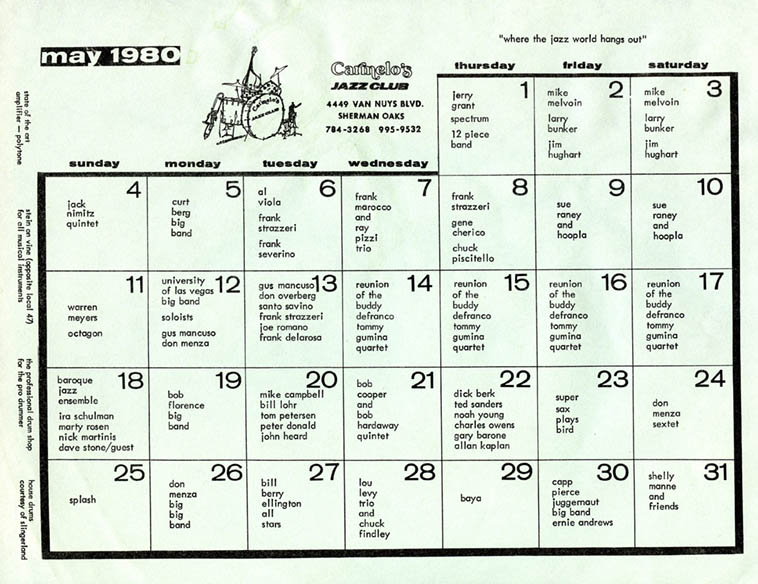 Says here that Aristotle walked while
he taught —- You think of Socrates
doing such things, walking talking drinking
hanging out in the market —- Did Aristotle
get that from Socrates? he was only a teenager
when Socrates drank the hemlock —-
that was 399BC Athens, a busy place —-
Says Aristotle was a pupil of Plato, but
eventually took opposing views, probably
all that walking put them at odds —- I myself
do a little of both, I do like logic (Aristotle), it’s
comforting to know
it exists, that, and reason “”the intellectual
faculty by which conclusions are drawn
from premises,” add to that: “sensible conduct . . .
moderation . . what is right or practicable”)
—- sitting around staring into space —-
watching the roiling clouds —- seeing which
ant will find that dead fly you just swatted
and are now feeling guilty for killing a fellow being
—- cogitation, I think they call it —-
I suppose it’s
what poets are suppose to be doing —-
Aristophanes would have called it: chewing the cud —-
I doubt it’s purely
the domain of poets, I see some children
that do it, and old people —- whether
it’s important I couldn’t say, I don’t fuss
with absolutes —- Absolutes are for
Greek philosophers, although, I don’t think
Socrates was into absolutes, he was
a contrarian, and didn’t like to be pinned
down, he was a champion wrestler in his younger
days I bet, all greased up with olive oil you couldn’t get
a grip on that guy, he’d confound you ten ways
to Sunday then laugh at you while you bought
the next round —- No, Socrates was full
of crap, too, with the crucial difference that
he knew it, they say he never wrote anything
down, why bother?

* I got all this from looking up peripatetic in the dictionary 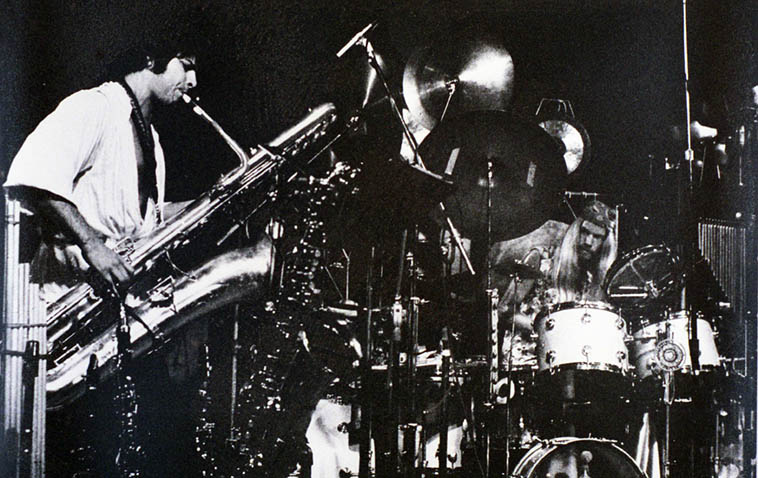 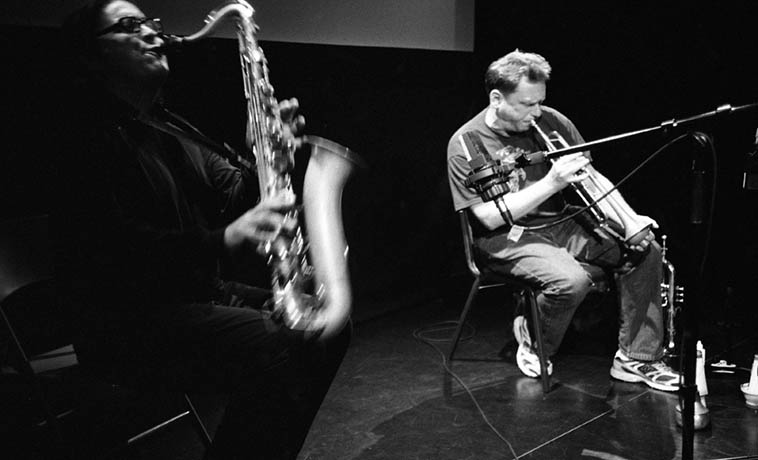 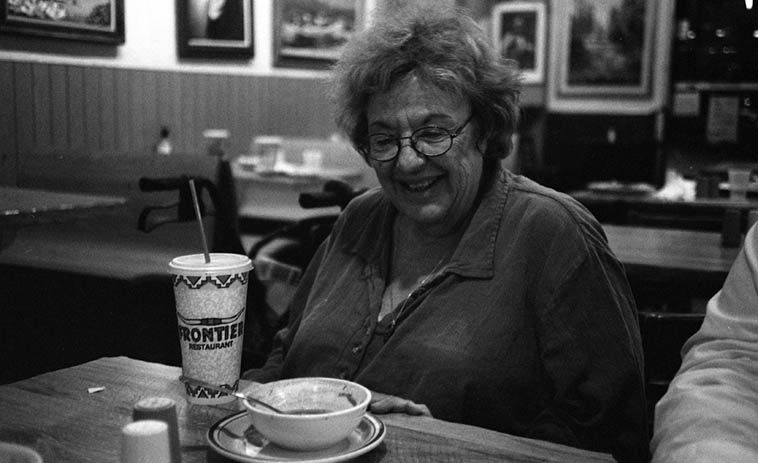 The rain surprised us
and of course, all the taxis
dried up and disappeared.
We settled for one of those
glassy hotels
with clean restrooms and
a piano bar
cozily serving up hors d’oeuvres
and standards,
like “Violets For Your Furs”
and “September In The Rain.”
I think we were drinking Manhattans,
more as a salute to the moment
than anything else
because we were sophisticated,
but not yet romantic.
Romantic came later. 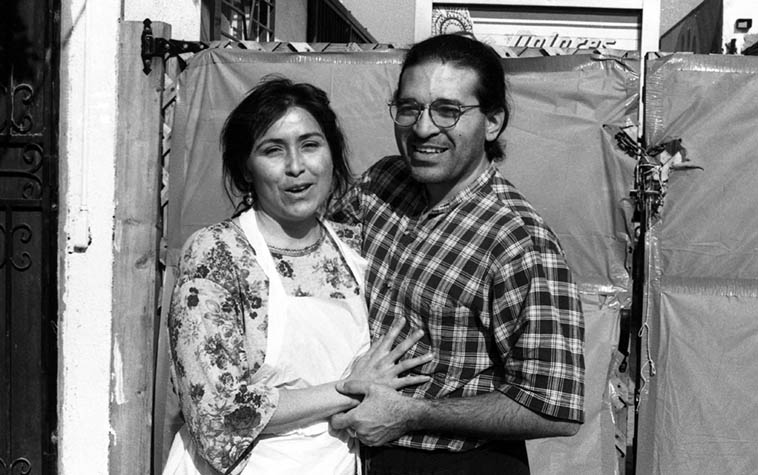 Chris Garcia and his wife Yolanda at Juanito’s Tamales in East L.A. — December 22, 1995 —- They owned Juanito’s those years and Yolanda was working long hours to get the Christmas tamales ready in abundance because in Los Angeles that’s what we do at that time of year: Eat lots of Christmas tamales — photo by Mark Weber — (Chris is drummer with the Grande Mothers, Michael Vlatkovich, Bobby Bradford Mo’tet, Quartetto Nuevo, de man ia w/Alex deGrassi & Michael Manring, etcetera & etc) 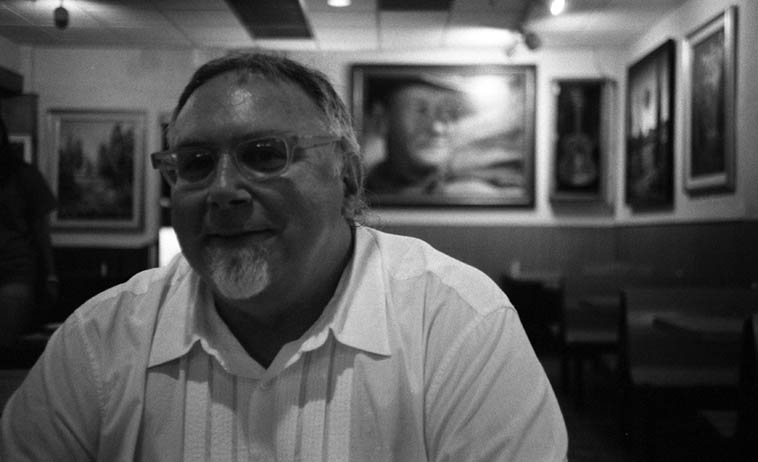 Michael Vlatkovich and John Wayne at the Frontier Restaurant, Albuquerque — August 23, 2o10 — photo by Mark Weber —— The Frontier must have 80 paintings on the walls and about 20 of them are John Wayne 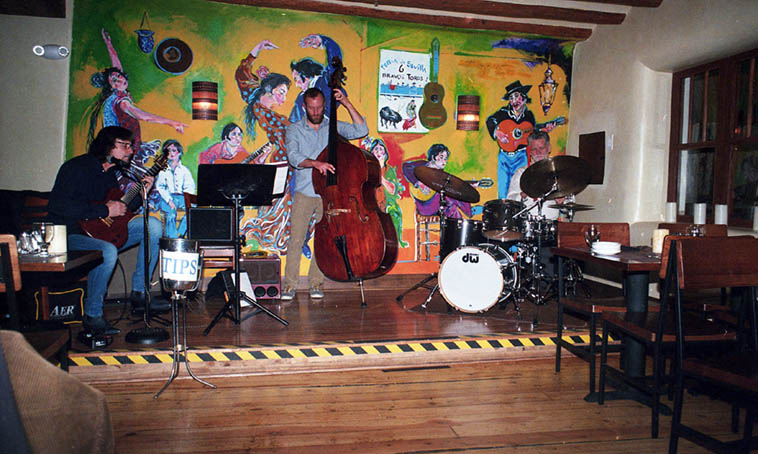 Pat Malone Trio —- Pat is one of my favorite guitarists, among many in New Mexico, absolutely free as the popcorn clouds —– This is one of his regular spots in Santa Fe: El Farol (built 1835) on Canyon Road — w/ Colin Deuble (bass) and Cal Haines (DW drums) — February 18, 2o18 (Cal’s birthday) — photo by Mark Weber — the place looks empty, but that’s because I knew to take some shots before the place filled up 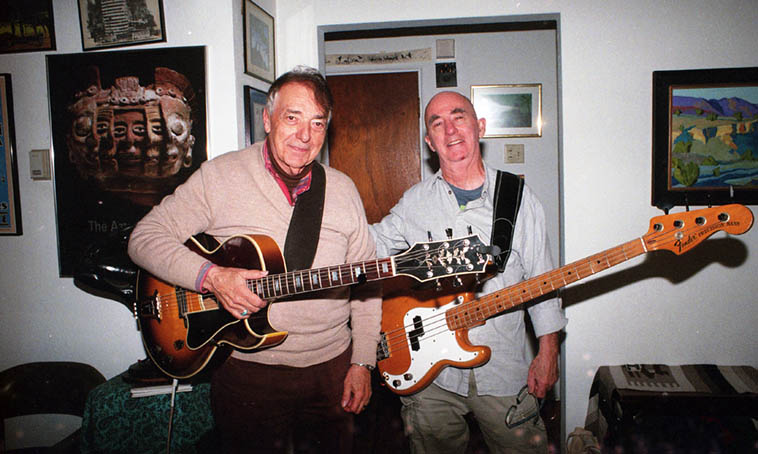 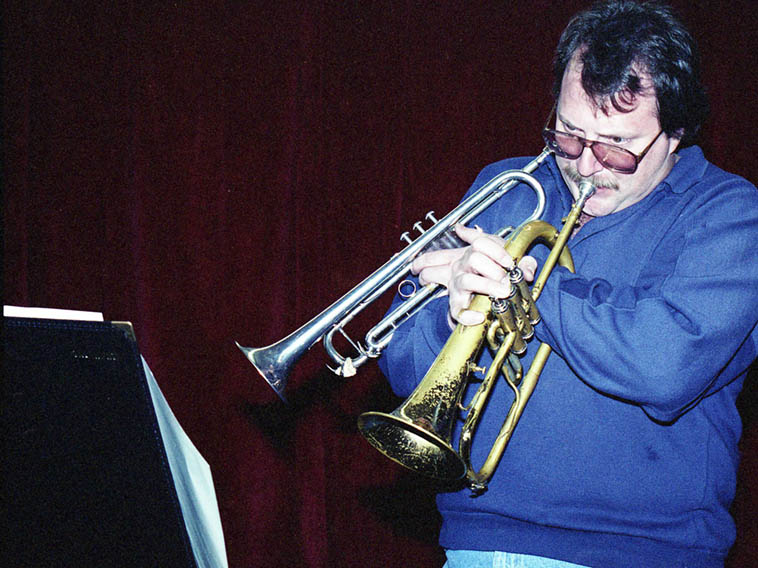 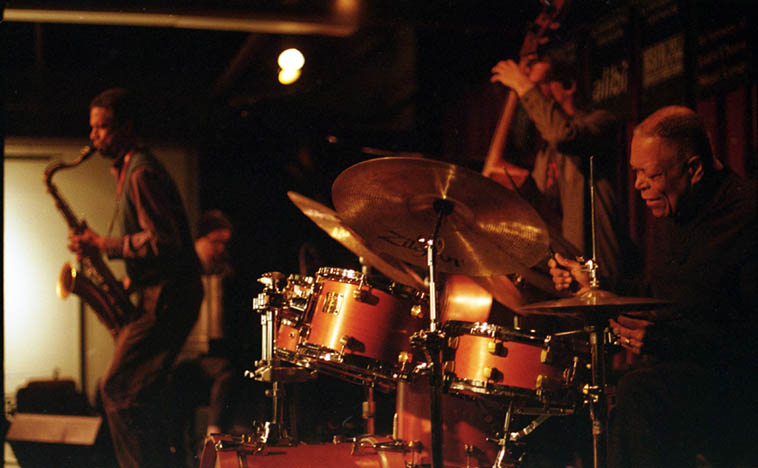 Billy Hart has lived in the center of that small ensemble heat for so many years that when he comes off stage he probably views the rest of the world sideways —- The Billy Hart Quartet: Ethan Iverson (piano), Mark Turner (tenor), Ben Street (bass), Billy (drums) — March 1, 2o18 — Outpost Performance Space, Albuquerque —- photo by Mark Weber 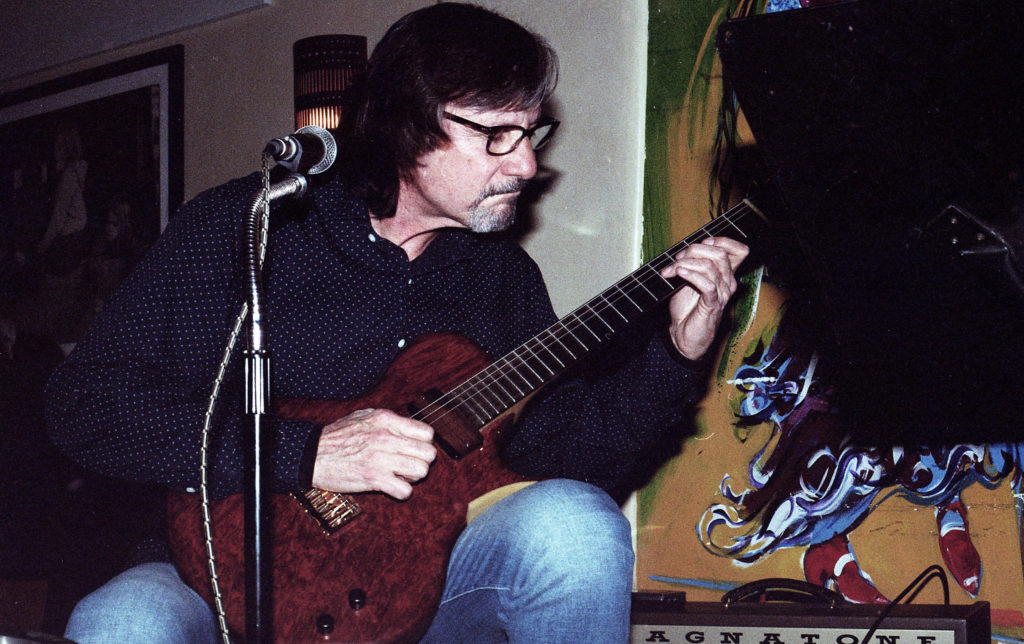 Pat Malone and his 2017 custom-built redwood guitar made locally by Parizad Hatcher (she’s Persian) and his Magnatone tube amp — February 18, 2018 —- Be sure and check Pat on YouTube — photo by Mark Weber 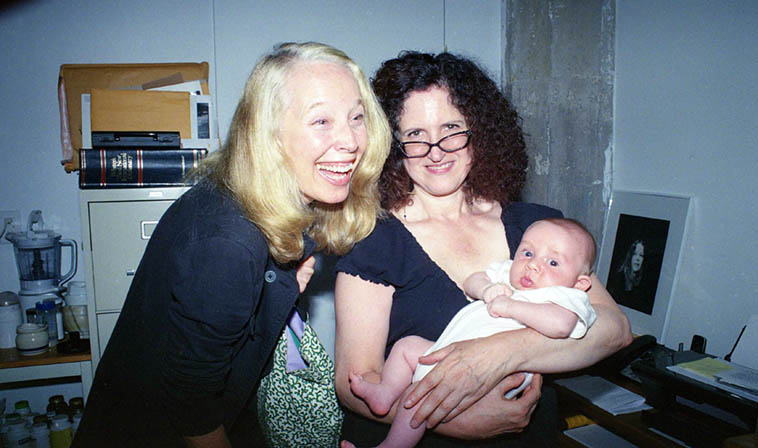 Two pianists and a baby: Kazzrie Jaxen and Carol Liebowitz and Quincy Sanguedolce at Connie’s loft in Williamsburg — September 10, 2o13 — photo by Mark Weber —- There was a vibrant scene around Connie Crothers for years 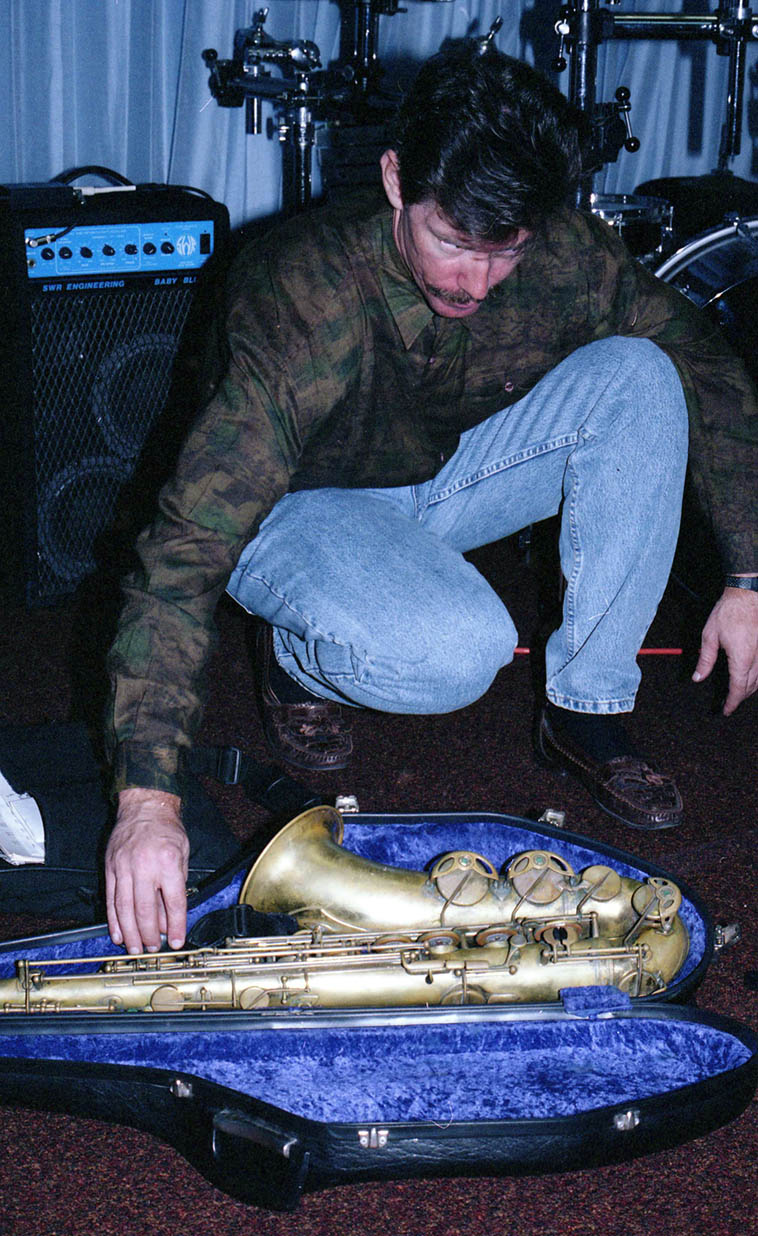 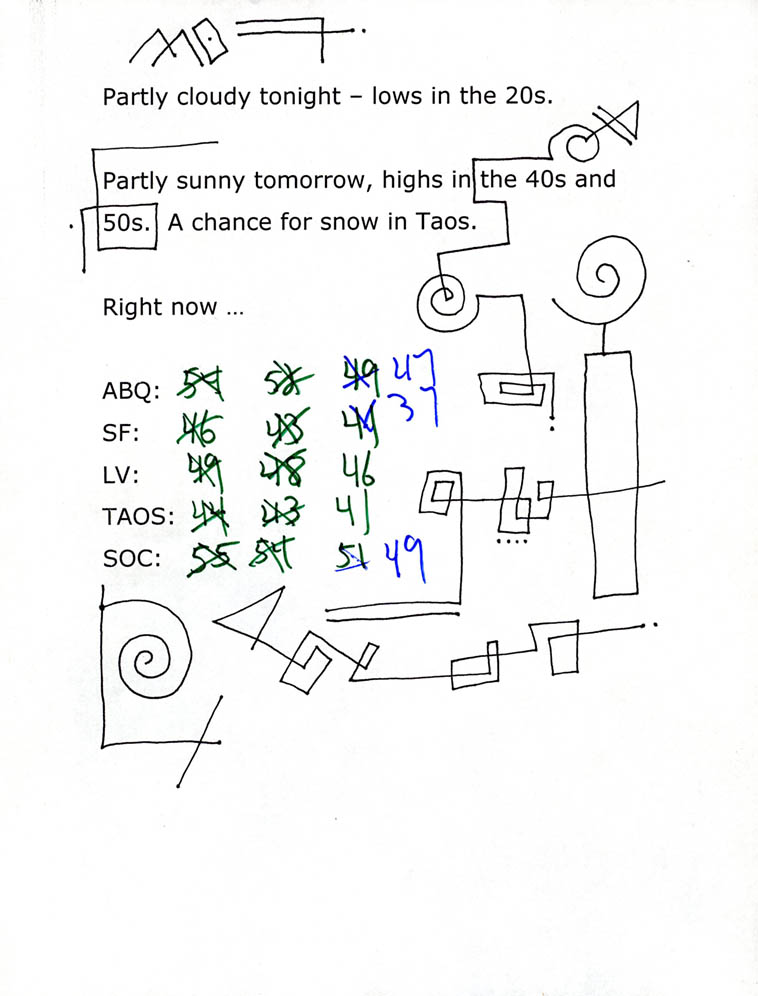