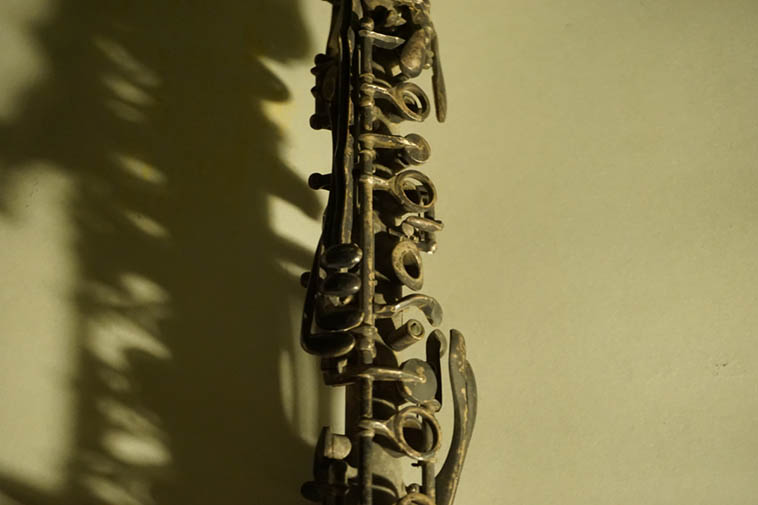 We live in a world of shadows / Sometimes the sound a horn is a shadow / This old metal clarinet probably marched in a parade, but who knows: Lester Young preferred metal clarinets —- photo by Mark Weber — July 12, 2o18

DEMARCATION
deave yet so tellingly
did the sky speak
that
only foolishness not overcome
would that we continue this path this day
to release the fire that
is in the wood
hunker down under this overhang
and take the day in forbearance
it is good to rest, gathering our thoughts,
strengthening our resolve, ordering
the alignment of stars come nightfall
meat to cook
crystal water
we only knew a hundred words then
in those days
and of them they were growing
as we spoke them
over and over again 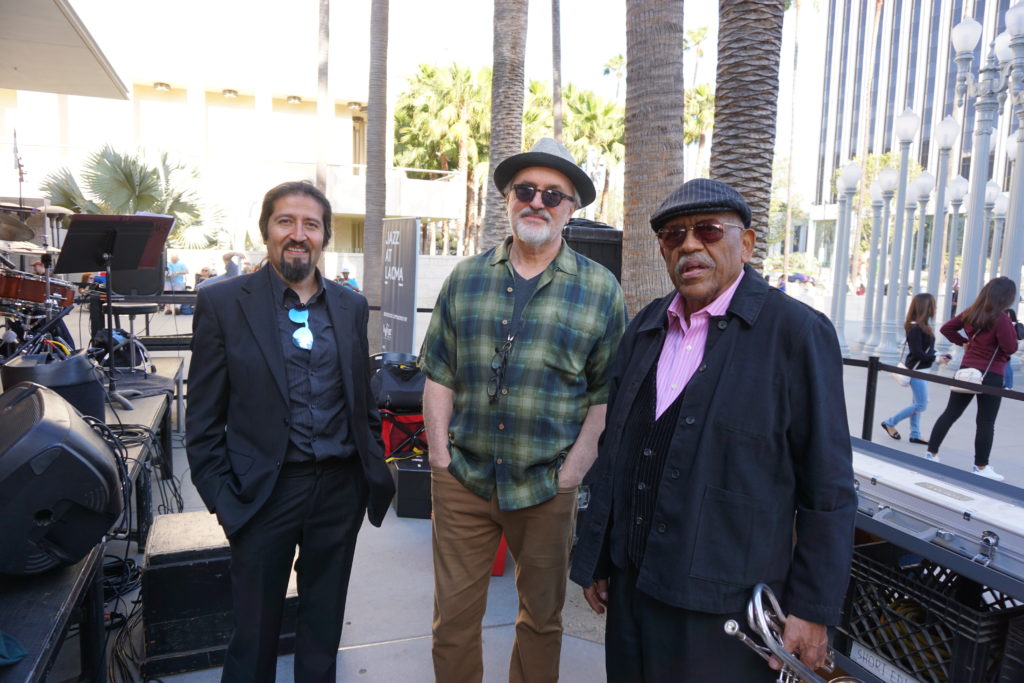 Bobby Bradford with his drummer Yayo Morales and pianist Theo Saunders at LACMA before the concert Friday June 15, 2o18 Los Angeles — photo by Mark Weber ——- Yayo was born in Bolivia and spent his first 20 years there, then to Madrid for 23-some years, and now he’s in L.A. and Henry Franklin brought him to Bobby’s attention —– Theo has been knocking about L.A. jazz scene for decades . . . . . . . . 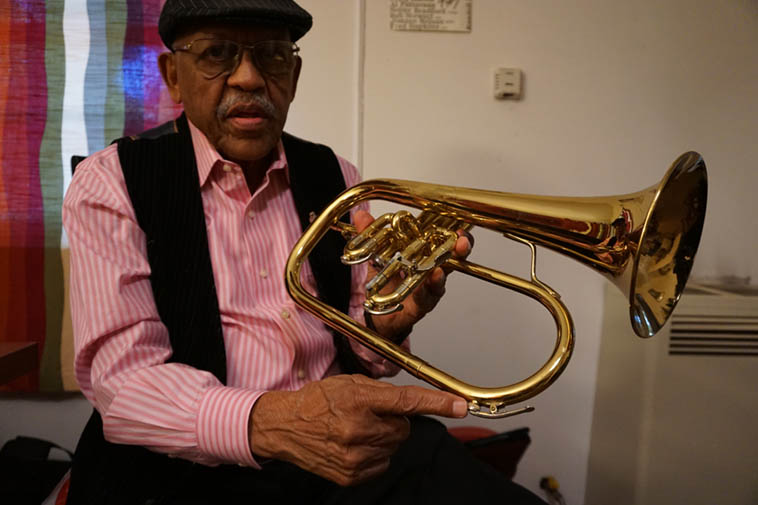 Bobby Bradford and his 1970s Getzen flugelhorn he just bought off EBay and is still putting it through its paces to see if it will do what he needs —– In his studio — June 15, 2o18 before driving down to L.A. County Museum of Art ( “LACMA” in LAspeak) for gig with his Mo’tet — photo by Mark Weber 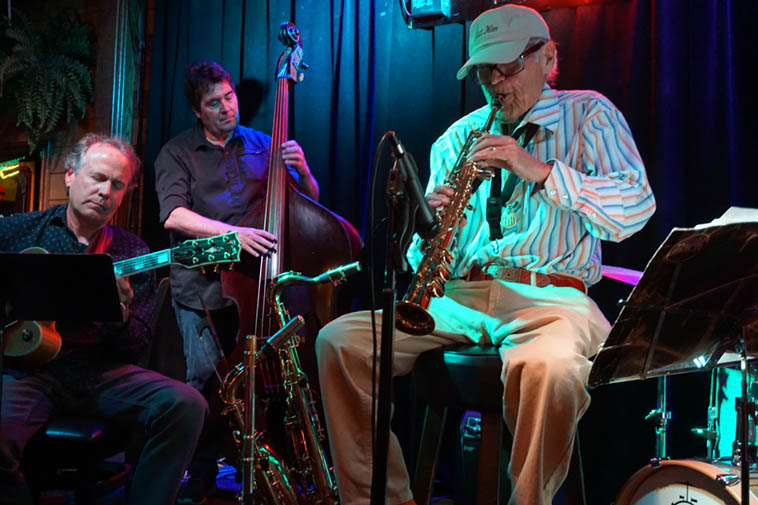 Anthony Ortega first made records in 1947 and worked around L.A. early 50s with Roy Porter (w/Dolphy, Knepper, Russ Freeman, etc) and Lionel Hampton (w/Clifford Brown, Art Farmer, Buster Cooper, Gigi Gryce, George Wallington) too many names to list them all, made a number of records under his own name beginning in 1954 but came up on our radar in L.A. in a great big way when he was soloist with Gerald Wilson Orchestra (1965-1984) — Gerald’s music was all over the radio those years —- Anthony is listed on 122 recording sessions at Tom Lord Jazz Discography —– On June 7 he turned 90 and is far from played out or done with music as I found out this Sunday when I ventured down to Encinitas on the Pacific Coast to hear him at Mr Peabody’s when he picked up the tenor (Selmer Super Action)(all his saxophones are Super Action that Selmer presented to him years ago, and kept in mint condition, they all looked new!) and blew me back into my seat —– He’s on fire! and that’s every Sunday from 6-10 at Mr Peabody’s — the Quartet this day was Bud Shyock (1986 Gibson L-5), Russell Bizzett (drums), Jeff Blanco (bass), Anthony (soprano, alto, tenor, flute, scat, and vocals– He likes to sing! and good, too) they played Songbook standards “Shiny Stockings,” “Easy Street,” “Invitation,” “Laura,” scatted on “Four,” Neil Hefti’s “Cute,” “East of the Sun,” and way into his LONG first set he finally picked up the soprano and played “So What” — photo by Mark Weber — June 17, 2018 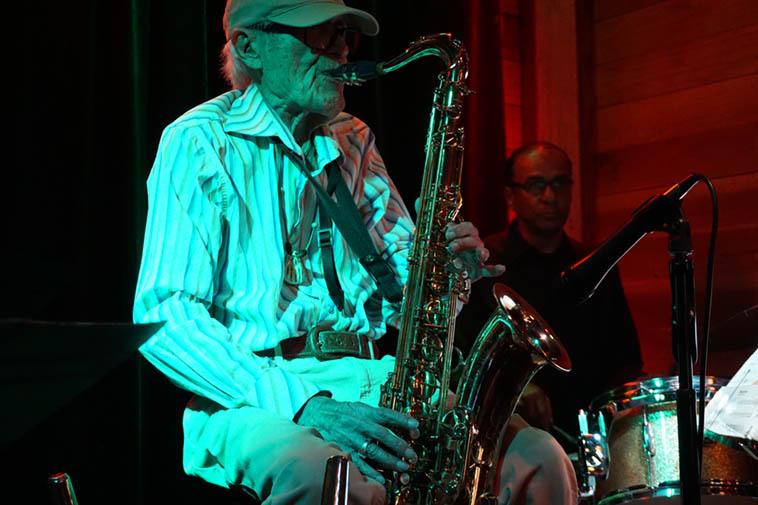 Anthony Ortega — June 17, 2o18 north of San Diego —– On Friday, at Bobby Bradford Mo’tet concert at LACMA I told (bassist) Henry Franklin that I was going to see Anthony Ortega on Sunday, he burst out “Batman!” purely smiling 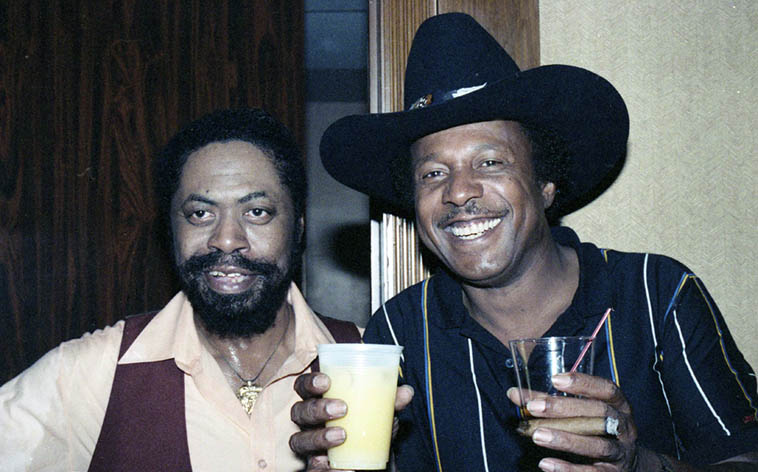 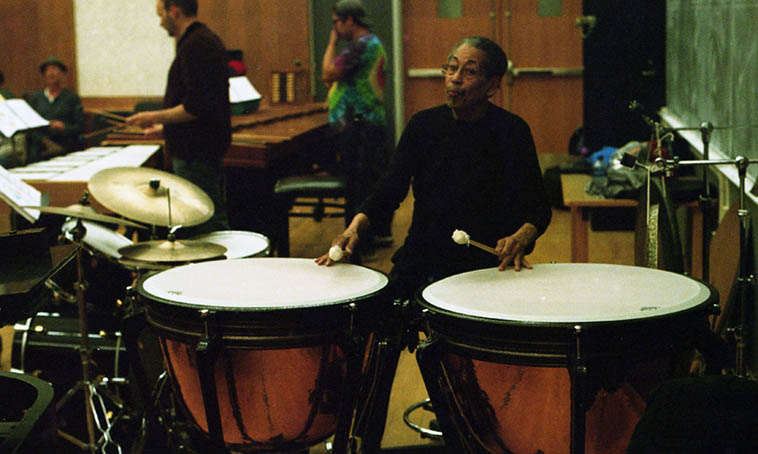 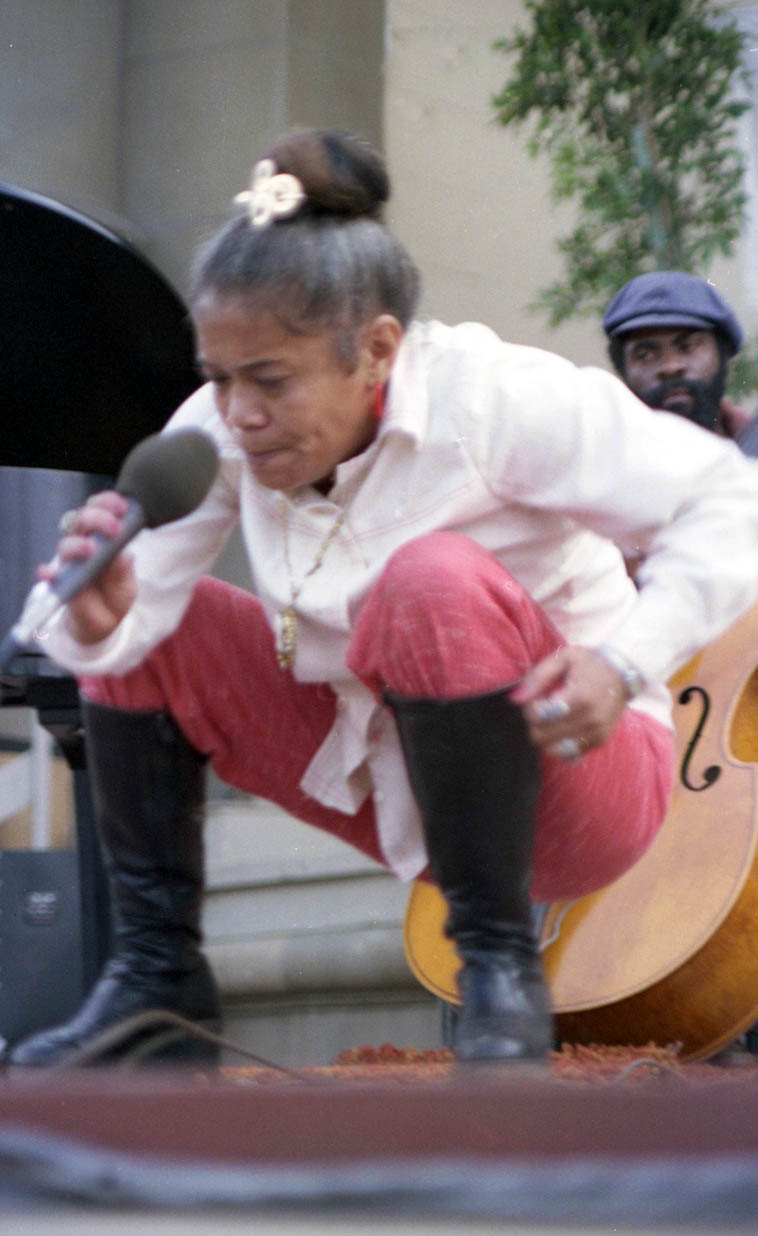 Sugar Pie DeSanto is coiled for blast off — 1955 Johnny Otis made her a touring member of his Johnny Otis Revue and gave her the stage name Sugar Pie and by 1960 her hits started up the R&B charts —- And I understand she’s still writing songs and performing in the Bay Area —- photo by Mark Weber at San Francisco Blues Festival, August 12, 1978 —– on bass is Walter Savage who was one of the bass players on Horace Tapscott’s first album THE GIANT IS AWAKENED (1969) — Everything is connected —- I was hanging around Horace & Celia’s place one afternoon in the early 80s when Horace took a phone call, and when he got off he said, “That was Walter Savage, he lives in Oakland now, he called to say that’s where he’s at in case anybody wants to know” 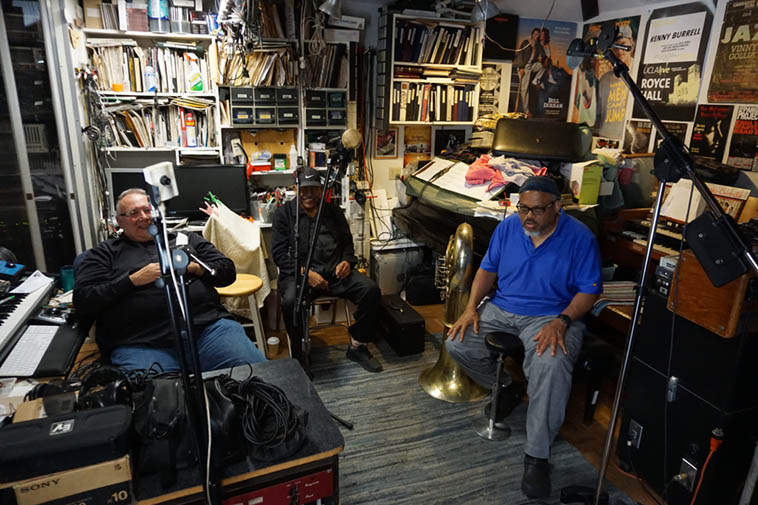 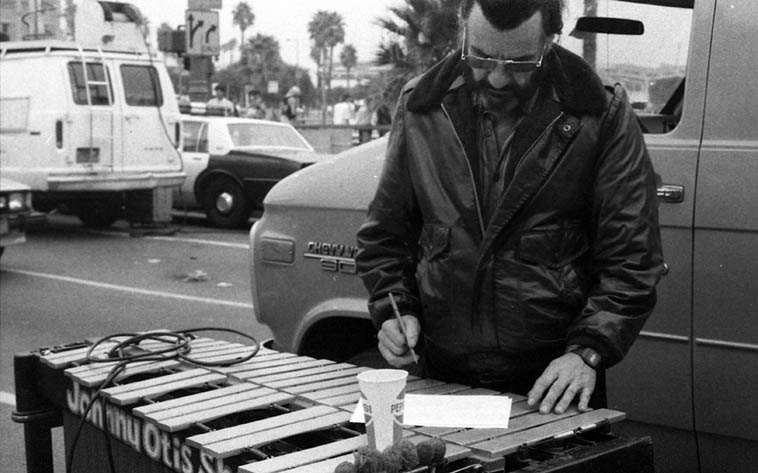 You know it’s got to be L.A. when you see palm trees, that or Saudi Arabia, toss in a cop car and the odds are it’s L.A. plus add Johnny Otis and it could be no other place — September 29, 1985 — photo by Mark Weber 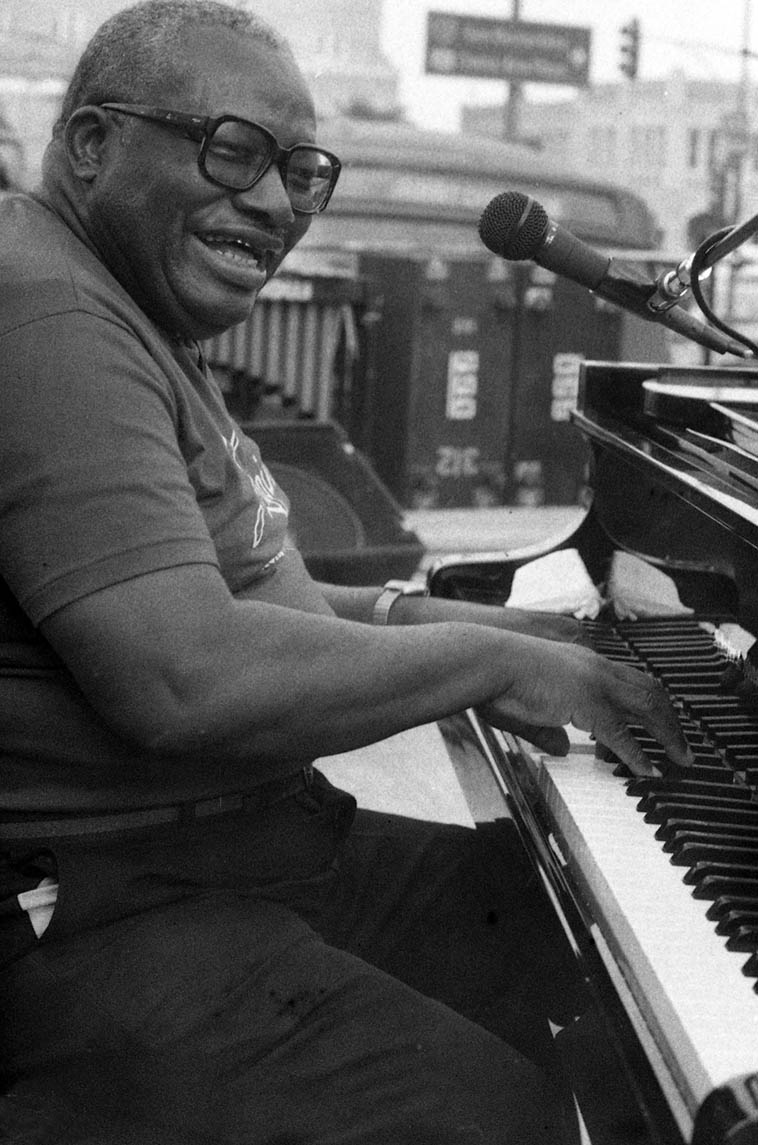 Joe Liggins had a major hit back in April 1945 in Los Angeles as WW2 was wrapping up (VE Day: May 8, and VJ Day Sept 2, 1945) with “The Honeydripper” and with the emergence of black radio, this new form of music now known as R&B blew the roof off with Cecil Gant, Roy Milton, Hadda Brooks, T-Bone Walker, Johnny Moore & the 3 Blazers, Johnny Otis and by the end of the 40s add: Big Jay McNeely, Joe Houston, Amos Milburn, Floyd Dixon and so many more —– photo by Mark Weber — September 29, 1985 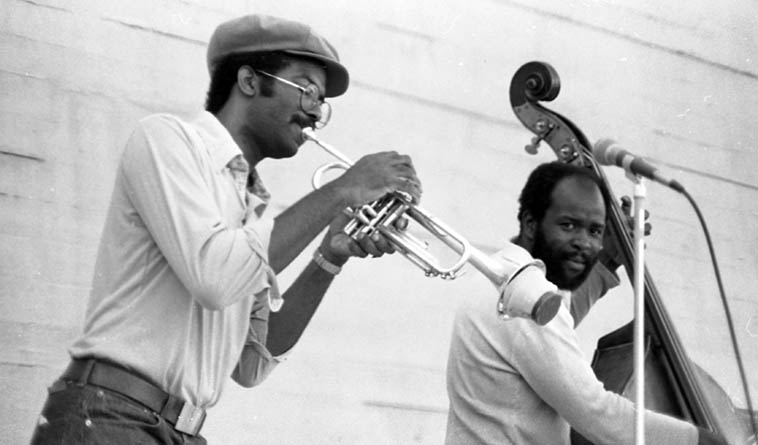 People respond to friendliness, and openness, and when you’re in foreign territory it’s comforting to meet a new friend — I was making my way into the San Francisco jazz scene and Andre always took the time to point things out to me, with a smile, so, I was saddened to hear of his passing a few Saturdays ago (May 26, 2o18 in Portland) —- George Sams (trumpet) and Andre St James (bass) as part of Sound Clinic (w/ Lewis Jordan, alto) afternoon of August 27, 1978 in the Western Addition, San Francisco — photo by Mark Weber —- The world needs more people like Mr Andre 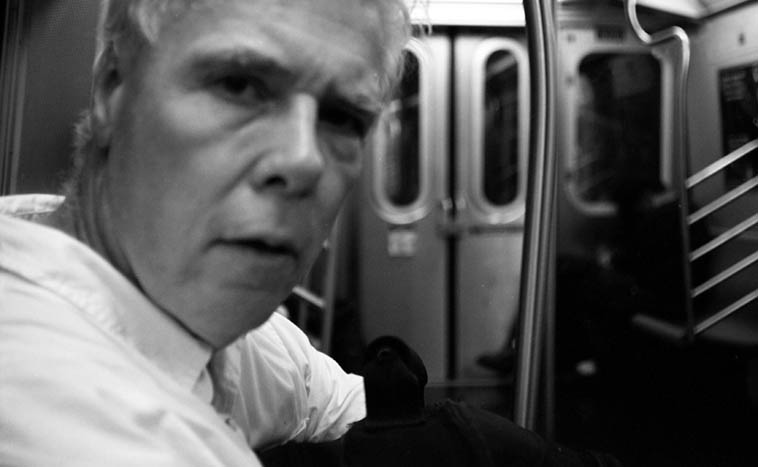 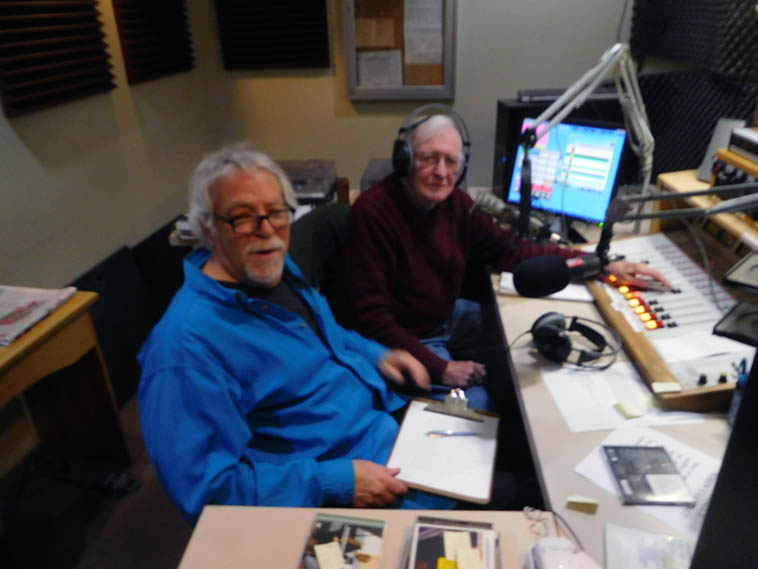 Arlen Asher & Mark Weber on the KSFR Jazz Experience in the midst of our 3-hour over-view we called Timeless Duke Ellington — December 18, 2o17 Santa Fe — photo snapped by operations manager Sean Conlon on that stupid Nikon Coolpix shirtpocket digital I have since thrown into the dumpster (the read-out says it was 10:40am)