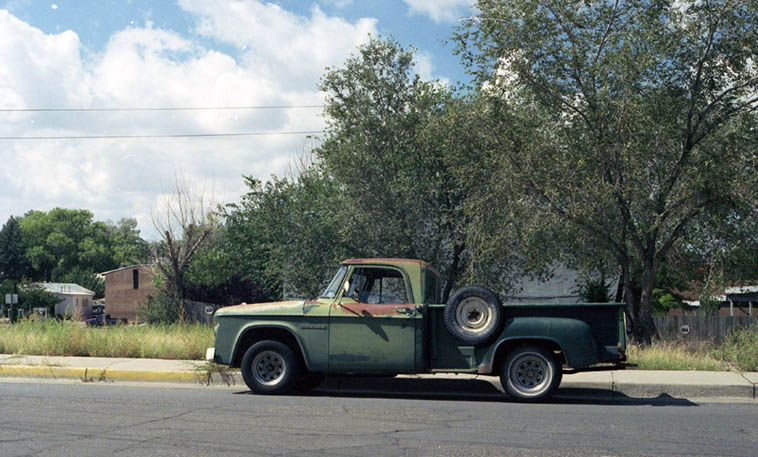 My old truck —- You can’t live in New Mexico and not have an old truck, right? I bought this beast from a drunken cowboy poet name of Kell Robertson for $500 and that’s after he begged me to buy it, and I relented, and then, later after he blew all the money in bars, said I gypped him and that he wanted $600 —- Kell was a hardcase, good poet, but too drunk to drive, he called this rattletrap Green Thunder (1962 Dodge w/ a 318 that only felt good over 60mph) —- I’ll never forget the time Tom at the Outpost asked me to drive the Swedish bass player Anders Jormin to the airport (I forget who he was in town with, might have been Bobo Stenson) circa 1995 —- we tossed his old bass in the back and took off, wherefore, en route I find out that this bass is like 5,000 years old and worth $80,000 —- my knees went wobbly and I brought the speed down about twenty clicks, said: Uh, Anders, you ever hear of a gig bass, you know, plywood knockaround bass? Meanwhile this expensive piece of wood is sliding around (in its case, of course) in the back, and he says, with Scandinavian slant on his English: “I prefer to have my best instrument with me when I perform,” a noble consideration, if impractical —— Photo by MW from September 23, 1997 parked directly across the street from the old Outpost Performance Space, Albuquerque

THE FREEWAYS OF L.A.

I love L.A., but it’s unlivable —- It’s too crowded, the freeways need be double-decked but earthquakes make that impossible —- Huge tsunami waves tower over the coast, swarms of wasps attack shoppers at the malls, smog has made a come-back after Proot, head of the EPA, has rescinded all restrictions on factory and auto emissions, the L.A. River Aqueduct runs black and the fish at sea where it outflows die, so do the whales, the last one died yesterday and Trump had it stuffed for his trophy room at the Western White House Fortress where he had Governor Brown strung up and he took California over and is raking in the “deals” too much money to be made to let the “environmentalists” get in the way —- He’s got California under his boot, and put Rush Limbaugh in charge of things back in DC, they both live for fatness —- I visit California less often and stay only as long as needed —- I’m stopped at the border on Rt. 40, my papers are not in order, I’m missing the permit to leave and haven’t pledged obeisance to the Oaf Potentate and am sent to work camp where I make bomb detonators, then I am made court poet, cautious, (the last court poet: Corso was boiled in oil after hanging a picture of Rimbaud on the White House lawnmower), the one before him is quarantined at the uranium mines, rabid dogs roam the fences after Proot shutter’d the laboratories, I’m now the court poet and have been commanded to write poems to His greatness —- Then, I wake up gasping. 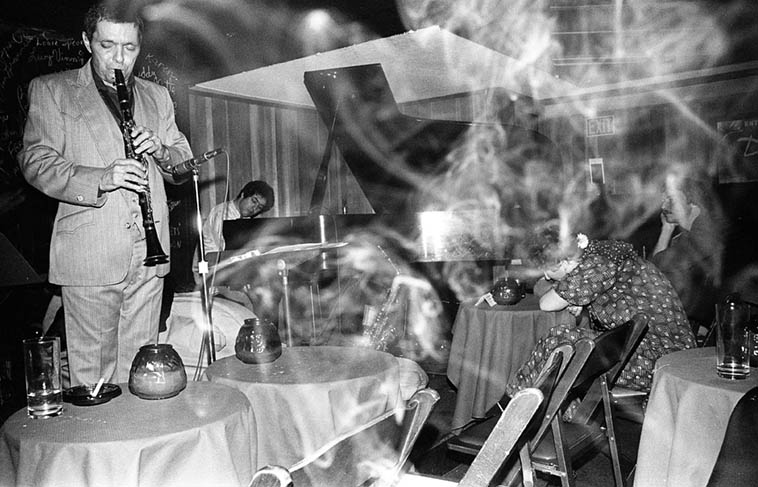 Art Pepper (1925-1982), it’s really not a Freud thing why someone uses drugs — with heroin, you are not going to want to hear this, but it makes you feel so good, down deep it smooths out all the uncertainties, and anxieties that mankind has suffer’d, for lo, 3 million years —- and someone like Art with his talent and intelligence was thrown into an adult world much too young and expected to rise to the occasion and take his lumps and not complain —- He was a sitting duck —- They’ve discover’d a lake community in the Swiss alps of 5,000 years ago that was growing opium poppies —- There’s no getting around the emotionally arrested state that drugs mires a person within (the inability to digest criticism, the harboring of resentments, etc) —- I’ve often suspected that the image of a man sitting in lotus at Mohenjo-Daro was influenced by the opium nod, that the whole concept of meditation grew out of opium those many thousand years ago (further support for this crazy theory of mine can be found in the Veda texts that predate Mohenjo-Daro Indus Culture —- where you find the magical drink soma [Indus Culture 3300 BC] Humans like comfort) So, Art was not alone in this long tradition of soma: All the priests in the cities before Babylon made invocations to the sacred drink, this mysterious elixir, come from the Gods, relieves all pain, the smoke therewith that gives calm and restfulness ————– This photo is after-hours at Donte’s — January 16, 1982 second of a two-night date w/ Mike Lang, the soundtrack composer on piano —– That foggy cloud is an artifact of improper film development —- That’s Laurie sitting at the little table in front —- Art didn’t play a lot of clarinet in public in L.A., so this was after-hours for the few of us who stayed late —– photo by Mark Weber 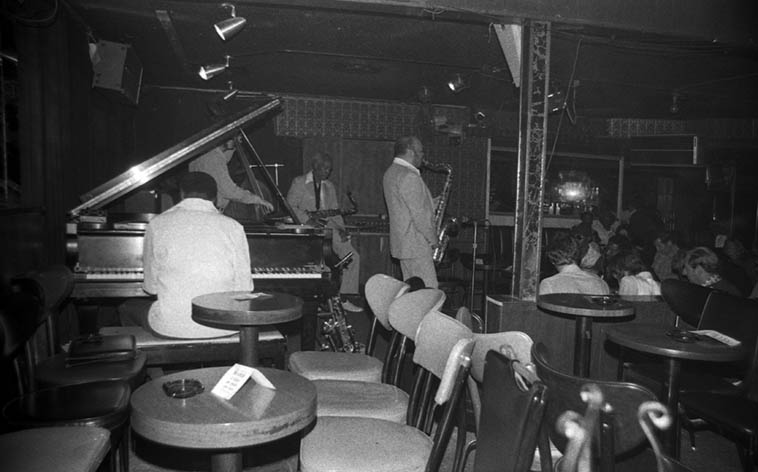 We all know Sonny Stitt, lone wolf, roamed the country using pick-up bands, played with whoever whenever, you provide the group and the money and he’ll make a record for you, made hundreds of records, all of them worth hearing, drank too much, off and on the bottle, this gig he was off, we talked sitting at a little table during a break, I had my own issues with drink and was staying sober at the time, that’s what I remember we talked about, drinking is insidious, a beer here, highball there, habitual drinking is not like a frat party, it’s merely one or two then three maybe another for the road and another when you get home and it adds up and after a dozen years of this the body starts sputtering like a car with a drop of water in the gas —- Red Holloway, on the other hand, didn’t have the bug, his first love was Charlie Parker, which you kind of wouldn’t suspect judging from all the R&B sessions he played on and soul jazz organ groups, he was a great guy, always in a good mood, he was the music director of the Parisian Room, always met you at the door with a smile and a handshake, maybe even picked out a good table for you —- The Parisian Room was a fabulous jazz club, situated in the West Adams District (just west of downtown, just north of South Central), I understand there’s a post office there now, they tore it down, now they run mail where they used to run the changes of “Night in Tunisia” —- photo by Mark Weber — June 13, 1980 Los Angeles: Sonny Stitt & Red Holloway (saxophones), Harvey Newmark (bass), Bruno Carr (drums), Art Hillary (piano) 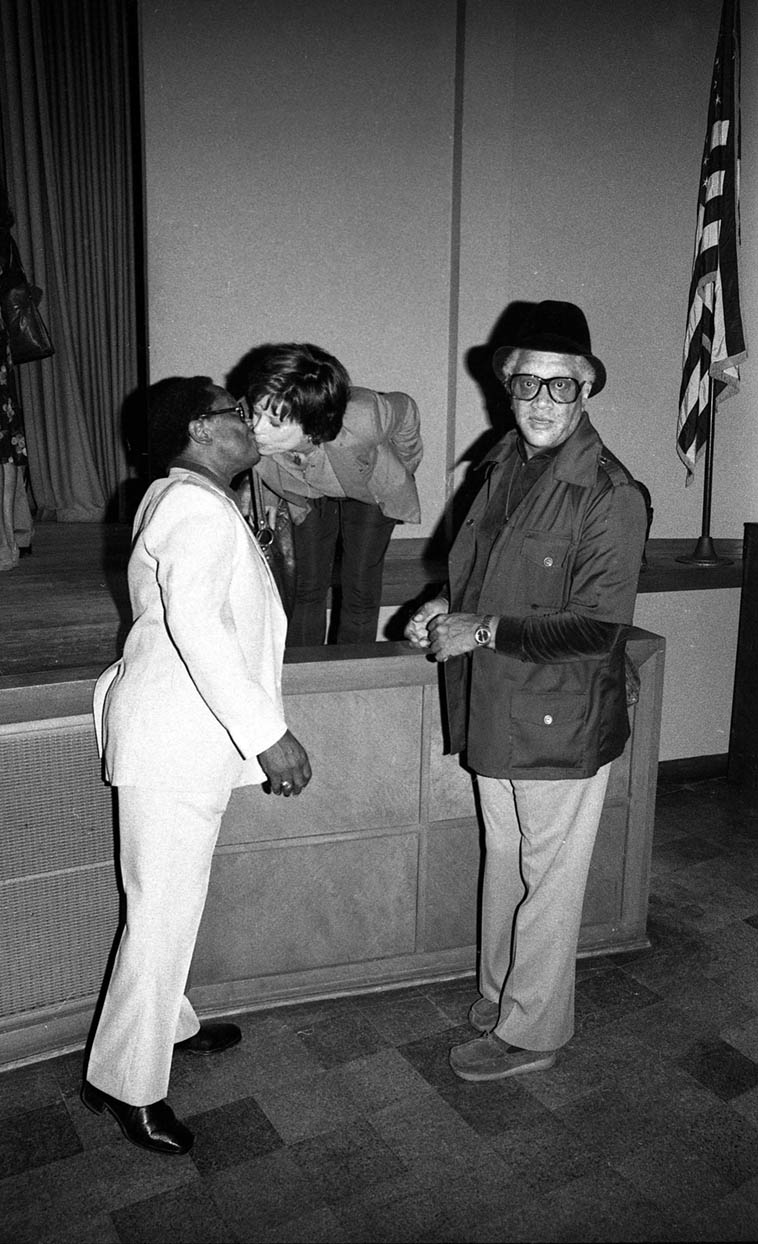 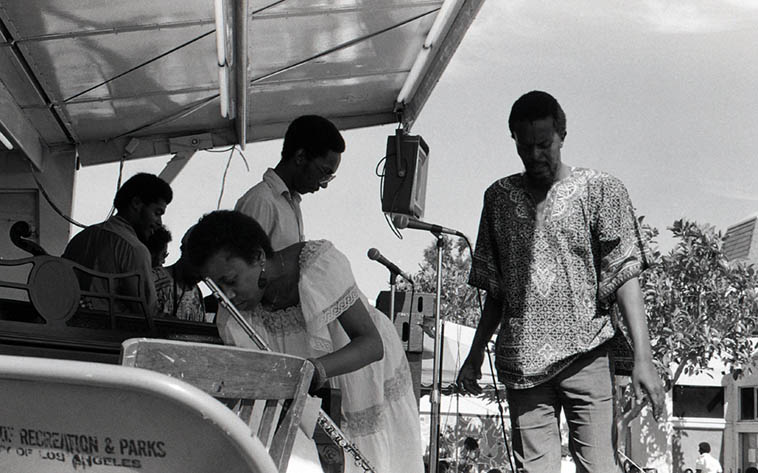 Adele Sebastian (flute) who was very special, here with the Pan Afrikan People’s Arkestra (that’s the other flutist in the Arkestra behind her: Aubrey Hart, and conductor/pianist Horace Tapscott — July 7, 1979 Watts Towers Jazz Festival — photo by Mark Weber 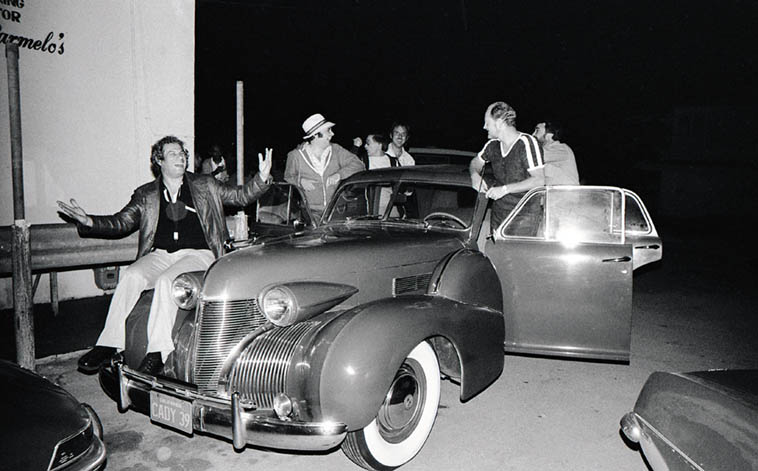 This is the outtake (we have already posted the more conventional photo with all of them looking straight into the camera) : Jay Migliori with his arms outstretched, Ray Pizzi in white hat with Strazz behind him hooking his thumb over his shoulder while trombonist Bill Moffett looks straight at the camera with a laugh, Don Menza in stripe shirt with Nick Ceroli behind him —- Just another warm night in Los Angeles out back of Carmelo’s jazz club in North Hollywood — the Don Menza Big Band between sets, with Don’s 1939 Cadillac — photo by Mark Weber — May 26, 1980 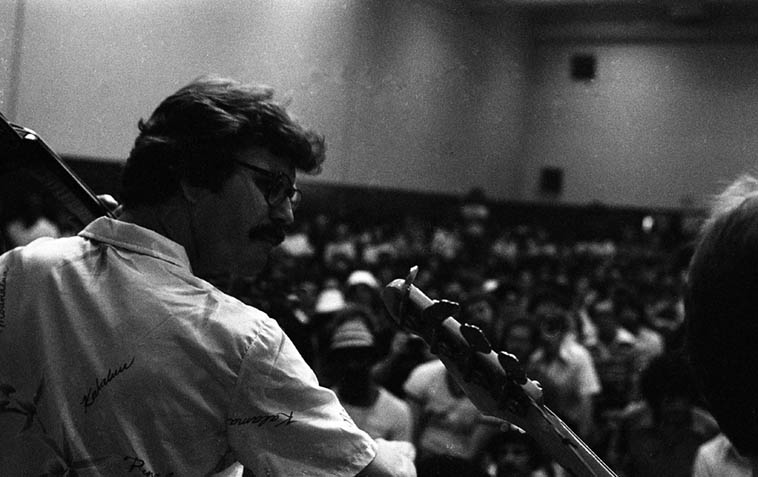 Bob Magnusson was all over the L.A. scene in those days, making a dozen albums with Art Pepper and almost that many with Bud Shank, as well as a few with Bobby Shew, Sam Most, Mundell Lowe, Sue Raney, Holly Hofmann, Pete Jolly, Bob Cooper, Joe Diorio, he’s on 190 sessions listed at Tom Lord Discography starting in 1969 with Buddy Rich up to now back in his hometown San Diego working with Bill Mays and Peter Sprague —- photo by Mark Weber — June 10, 1979 Local 47 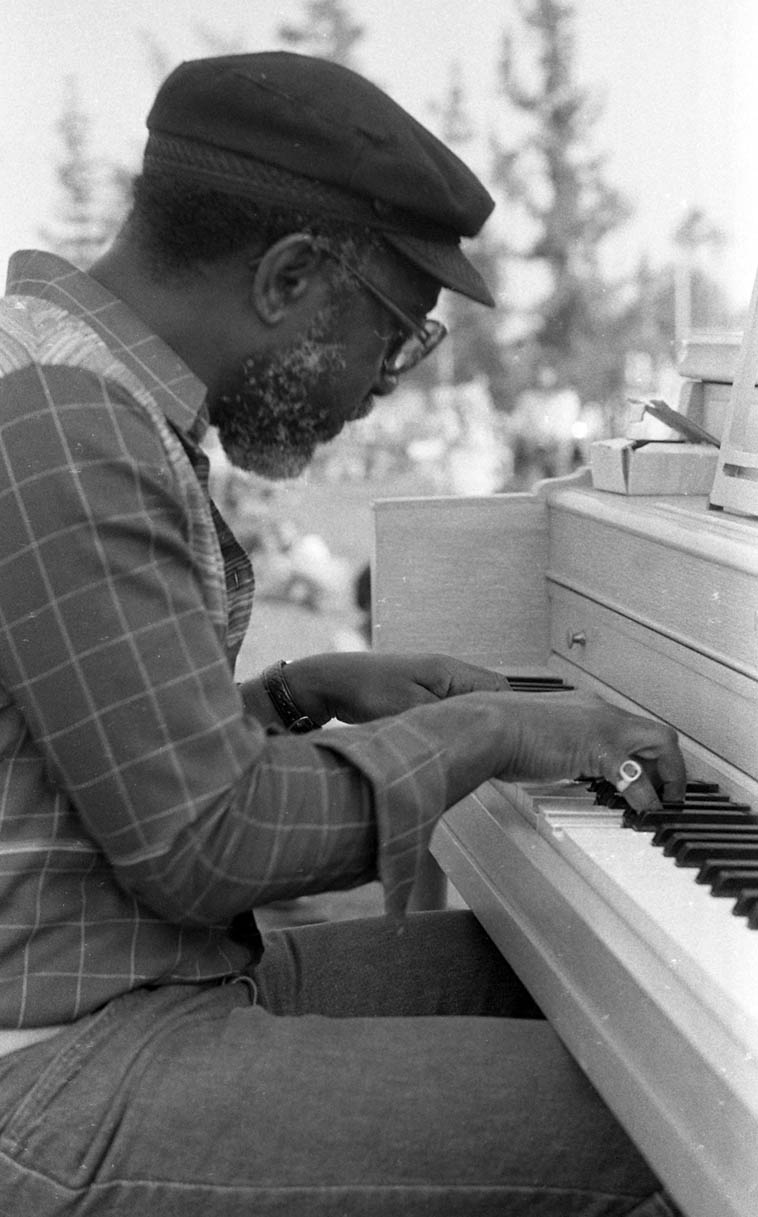 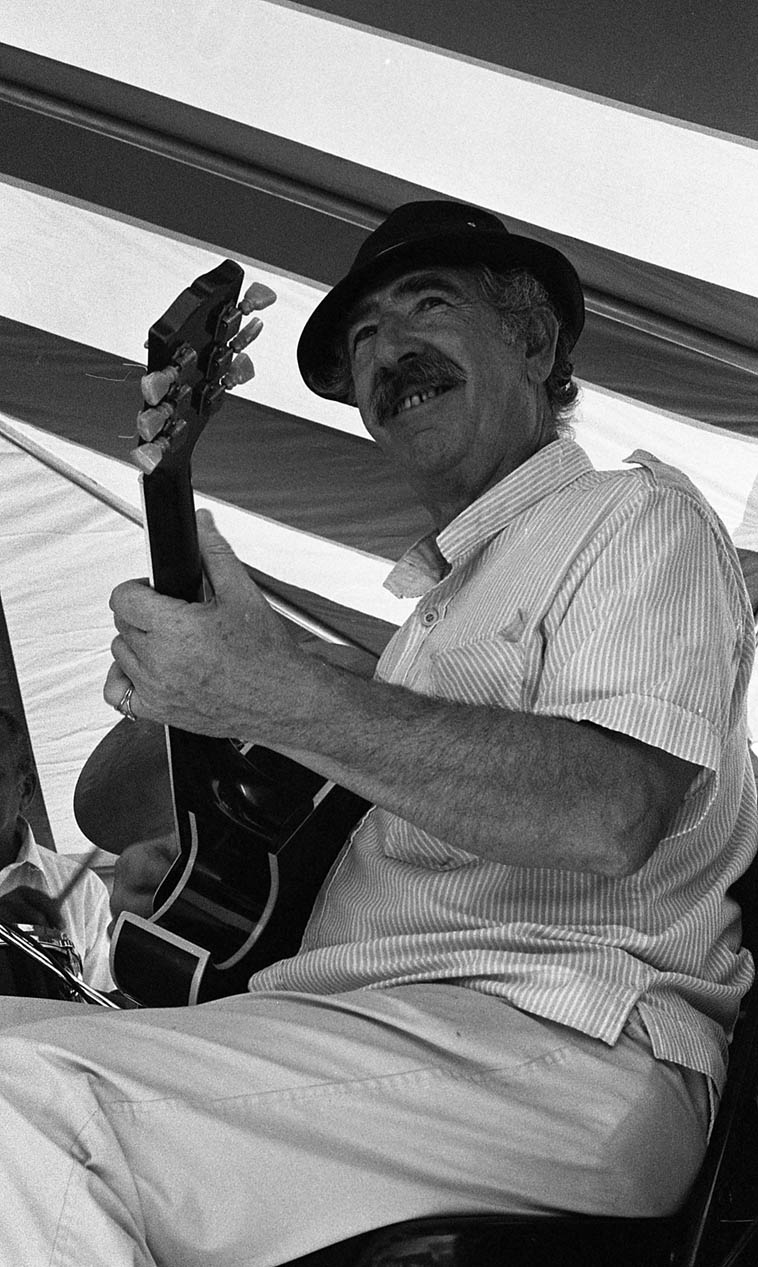 This is the guy you hear on all those Frank Sinatra records: guitarist Al Viola settled in Los Angeles in 1946 and participated on so many great West Coast records and soundtracks we’d have to take a detour on the Thursday Jazz Show just to play AL VIOLA for a year to catch up —- He even played on my favorite Frank Zappa album LUMPY GRAVY (1967) — Here he is with Buddy Collette Quintet — July 15, 1984 Watts Towers Jazz Festival — photo by Mark Weber 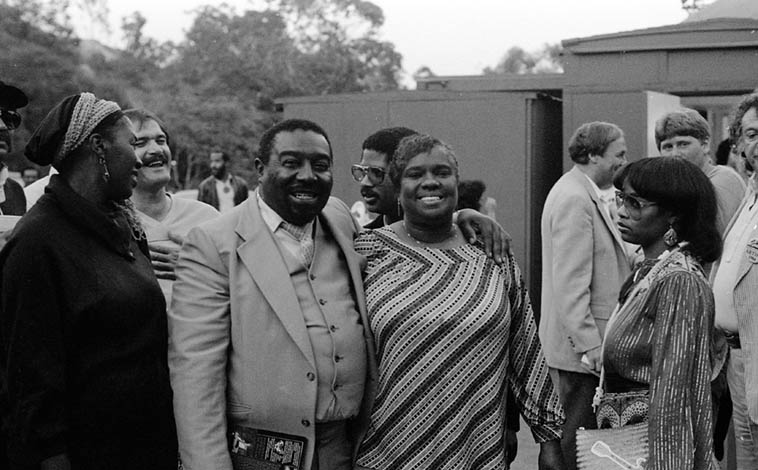 Floyd Dixon, blues man, pianist, follower of the horses (every time I ran into Floyd he was either coming or going to the racetrack), composer of “Call Operator 210” and “Hey Bartender” and “Dallas Blues” —- photo by Mark Weber — June 16, 1984, Hollywood Bowl 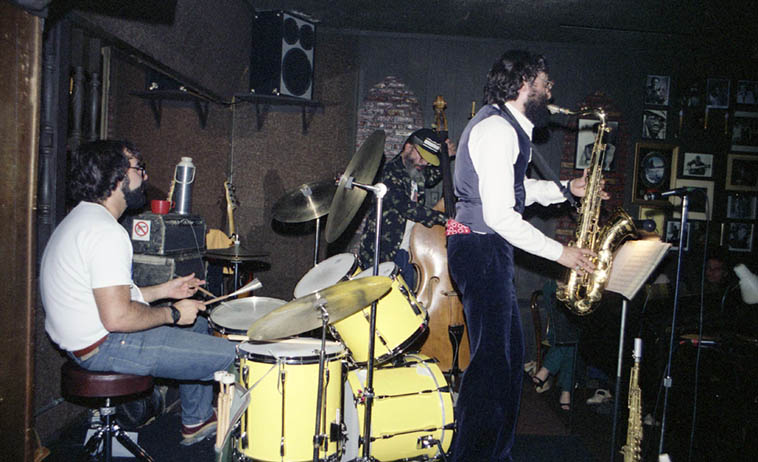 The late great BUELL NEIDLINGER with his Krystall Klear & the Buells quartet at Carmelo’s, North Hollywood — March 25, 1981 w/ Jerry Peters (piano), Peter Erskine (drums), Marty (saxophones), and Buell on bass — the last time I spoke with Buell only a few days before he got away from us, among other things he told me about auditioning for the Capt Beefheart Magic Band and Beefheart asked “Where are your banjo finger picks?” so, Buell ran out and bought some metal banjo finger picks to use on his electric bass —- Photo by Mark Weber 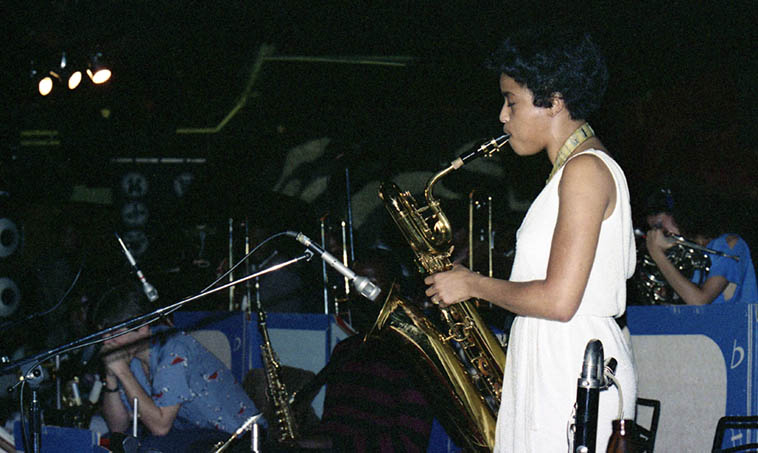 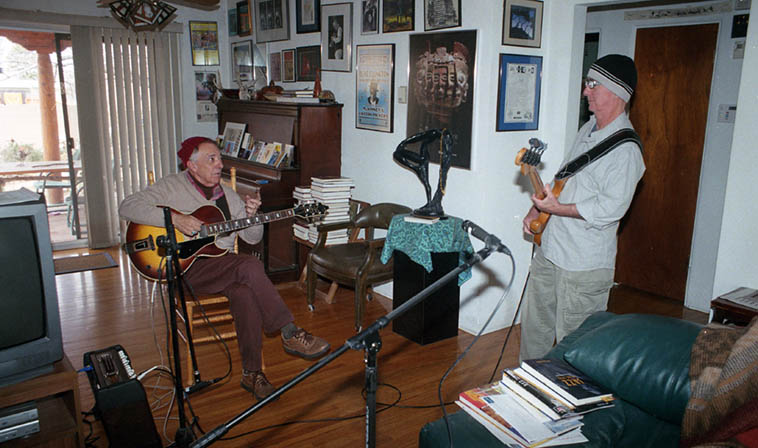 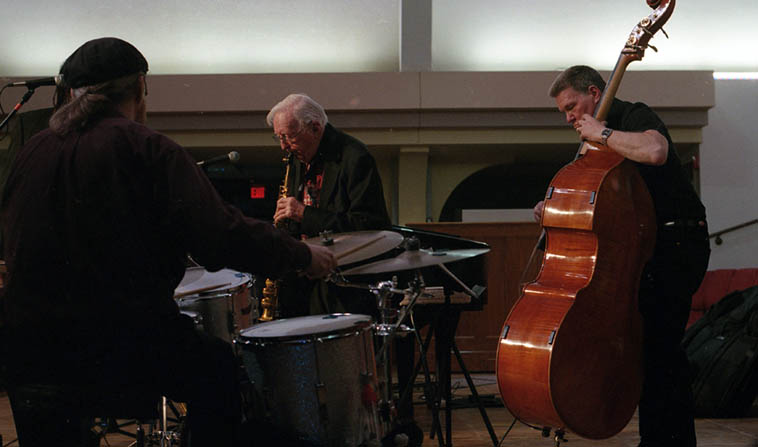 Arlen Asher Quartet — John Bartlit (drums), John Blackburn (bass), Jim Ahrend (piano), Milton Arlen Asher (woodwinds) — March 4, 2o18 @ St Johns United Methodist Church, Albuquerque — photo by Mark Weber — They played “Willow Weep for Me”(flute), “Summertime”(soprano sax), “That’s a Plenty”(clarinet) and Arlen told story about his early love of Benny Goodman and BG’s arrangement on “That’s a Plenty,” that his very first gig was in a bar at age 13 in Missouri on December 6, 1941 “the day before the attack on Pearl Harbor.” “A Flower is a Lovesome Thing” (alto), “Mirage”(Jim Ahrend comp. w/Arlen on alto), “Memories of You” (clarinet), “But Beautiful” (alto flute), “I Love You” (alto), “Lost in a Memory” (JA –soprano), “Honeysuckle Rose/Scrapple from the Apple” (bass clarinet), “Lush Life” (soprano), and encore “Over the Rainbow” (alto) with vocal by Michael Herndon —–* My dream is to mount a concert with Sheila Jordan accompanied by Arlen someday (they were born 1928/1929 and both at the top of their game) and would sound fantastic together w/ Alan Broadbent and Cameron Brown (Arlen is all for it, when I told him) 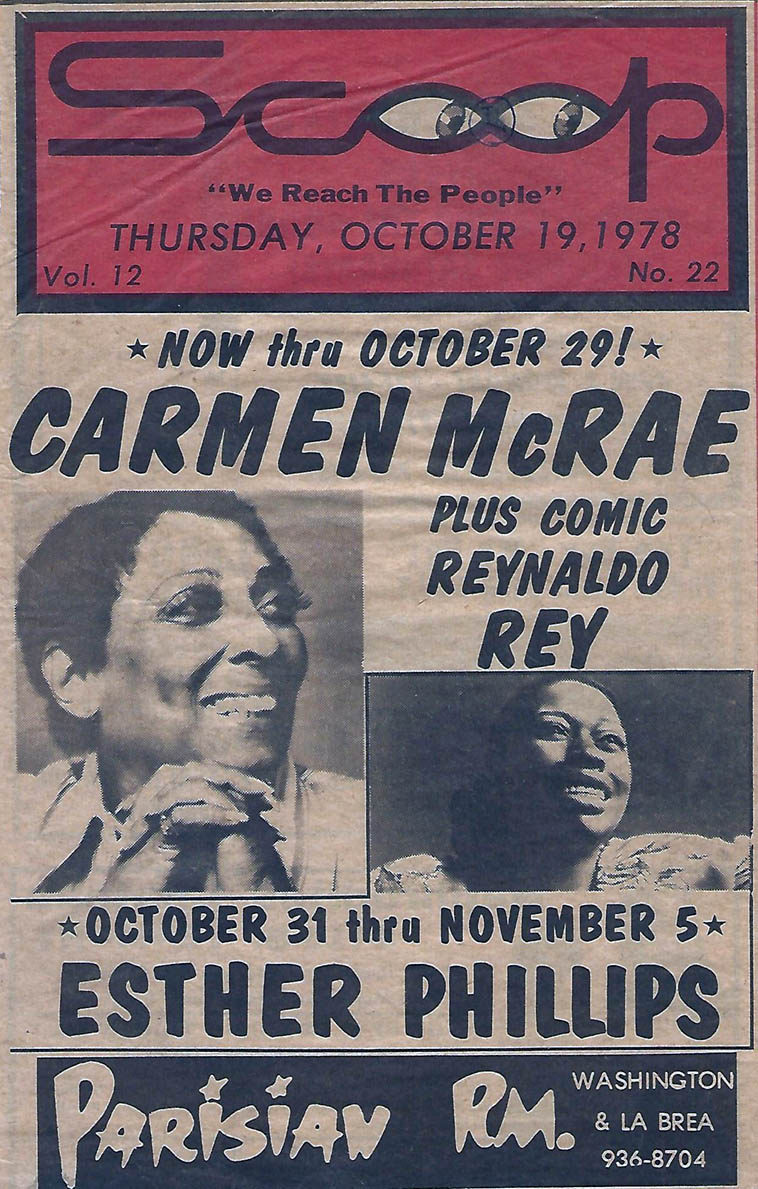