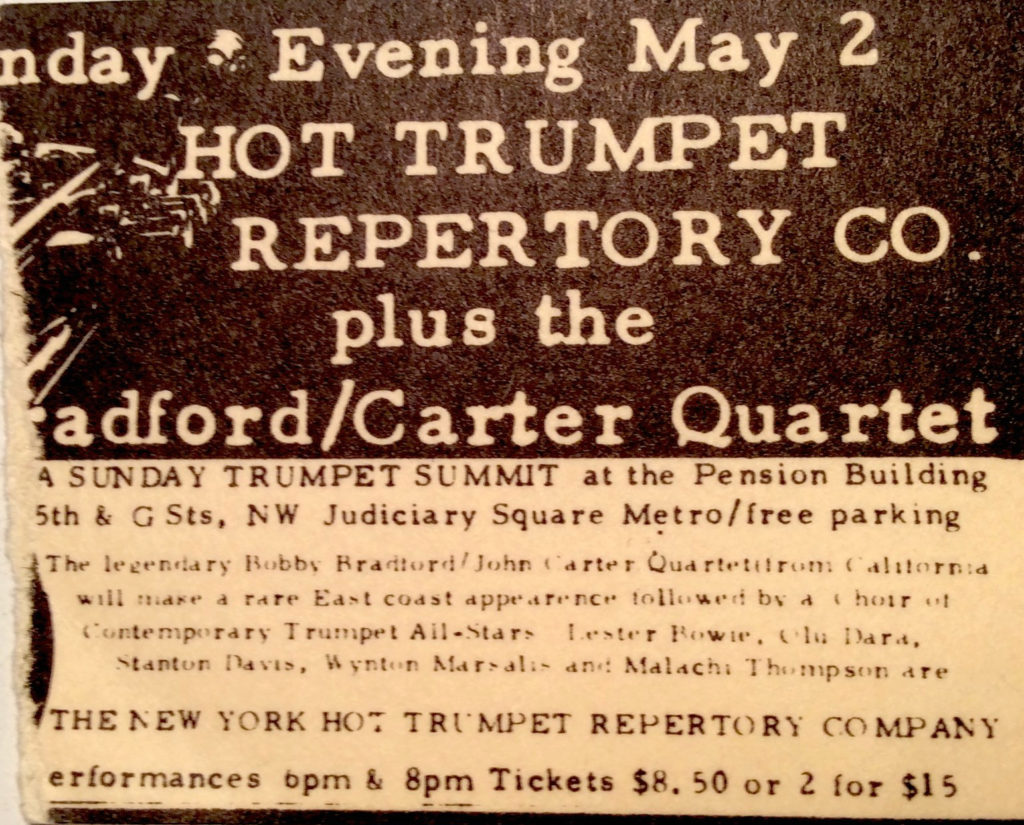 Bobby Bradford has been mentor and teacher to so many of us Angelenos over the years, I once asked him What’s all this total absorption in jazz all about? Is there something wrong with us? And he quite sensibly responded: Mark, it’s not such a bad way to spend your life. 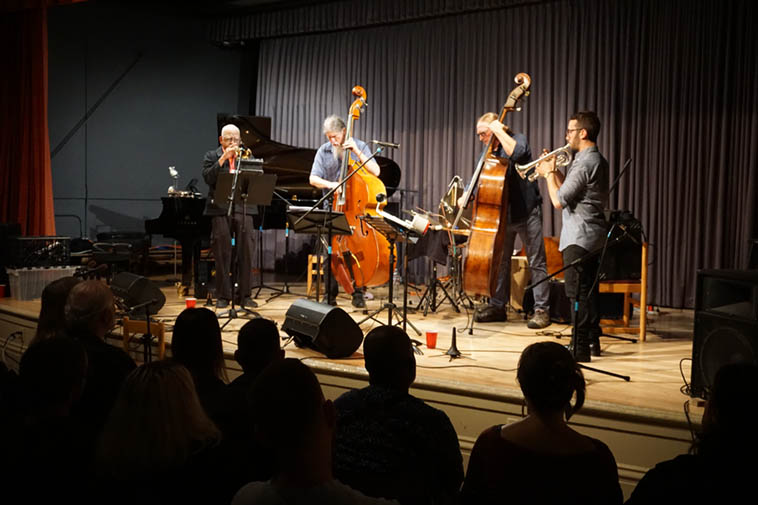 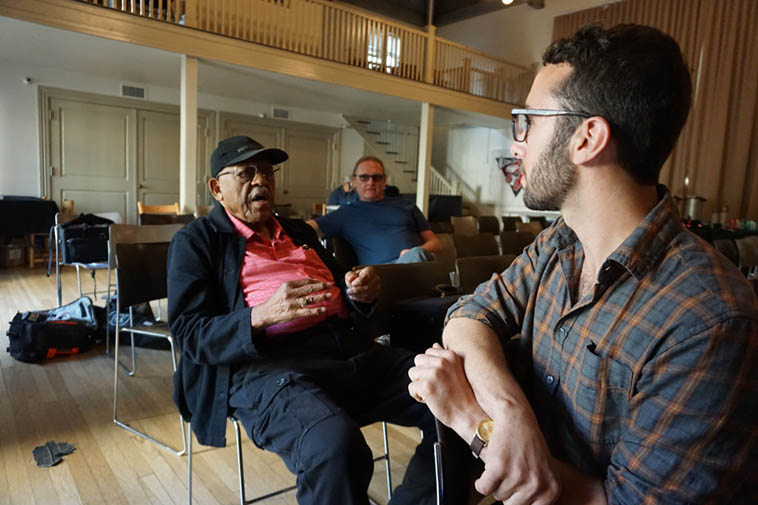 Bradford before the set speaking with fellow cornetist Theo Padouvas with Scott Walton in blue at Community Music Center in the Mission District – July 28, 2o18 – photo by Mark Weber 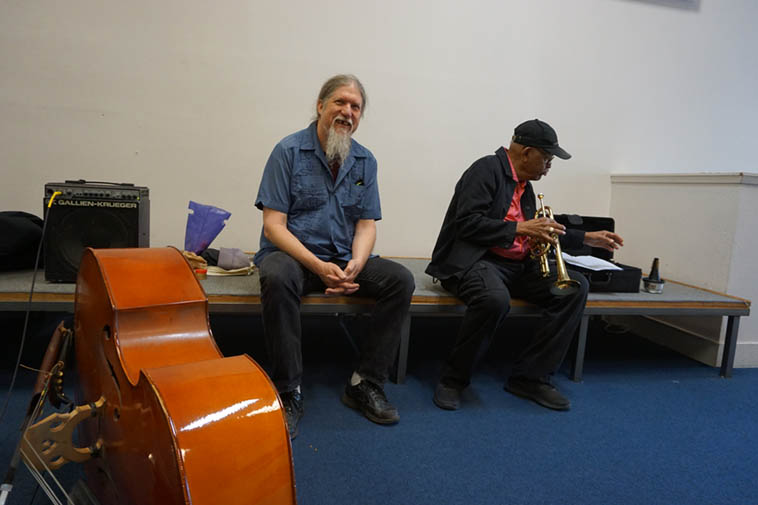 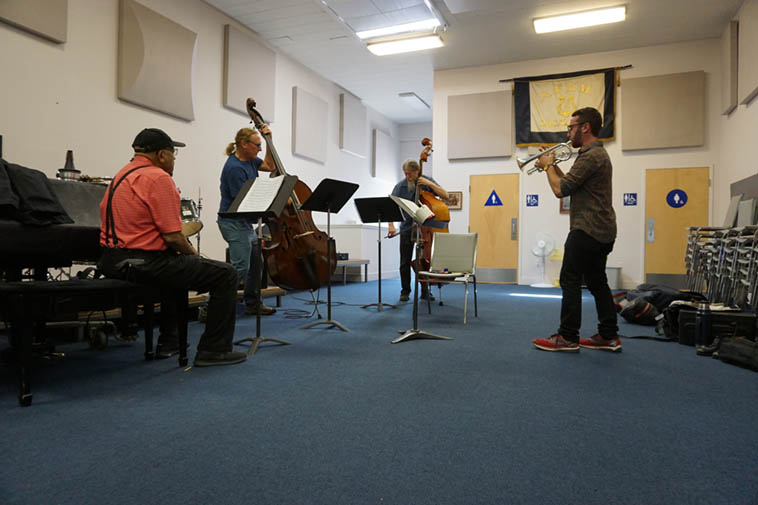 The band called Bobby Bradford’s Brass N Bass at the Union Hall running over the music to be performed that night at Community Music Center, 544 Capp Street, San Francisco: Scott Walton & Bill Noertker(basses), Theo Padouvas & Bobby(cornets) —- a fabulous off-the-map concert and a packed house, what a great space – photo by Mark Weber – July 28, 2o18 (this is a reunion for Scott, who played on Bobby’s cd ONE NIGHT STAND back in 1986; and Bill was a former student 2 decades earlier at Pasadena City College) 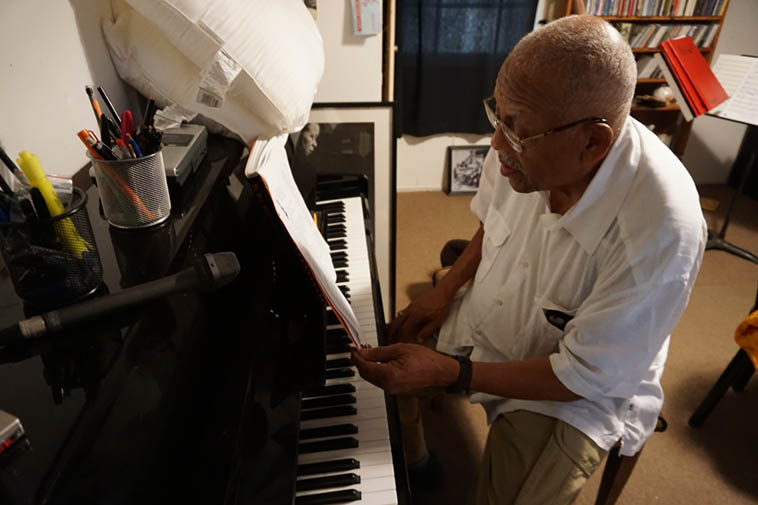 Bobby Bradford working me through the particulars of Bird’s “Now’s the Time,” a vastly more complicated tune that I ever imagined, in his studio – July 26, 2018 Altadena, California —- The next day we hit the road for the 500 mile drive up to San Francisco – photo by Mark Weber 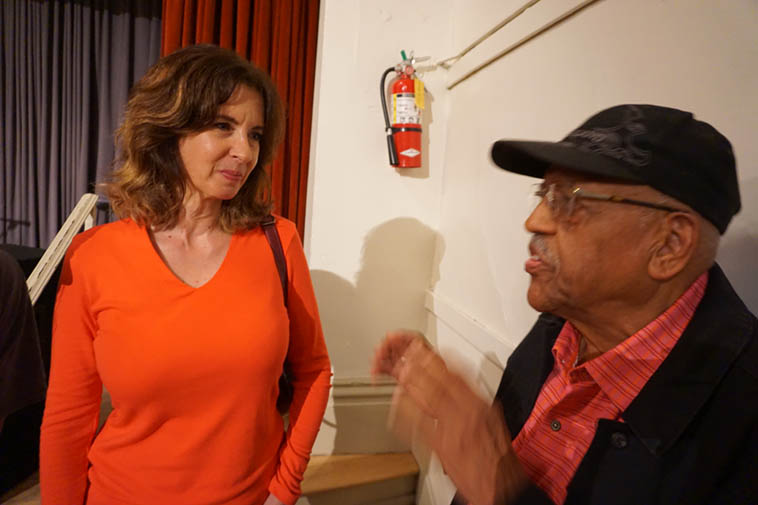 It was so good to see Lisa Towles, again (in the 90s she was Lisa Polisar and a member of my MW Poetry band on flute here in Albuquerque) – Here she is meeting Bobby Bradford for the first time —- July 28, 2o18 San Francisco —- She moved to the Bay Area ten (?) years ago —- photo by Mark Weber 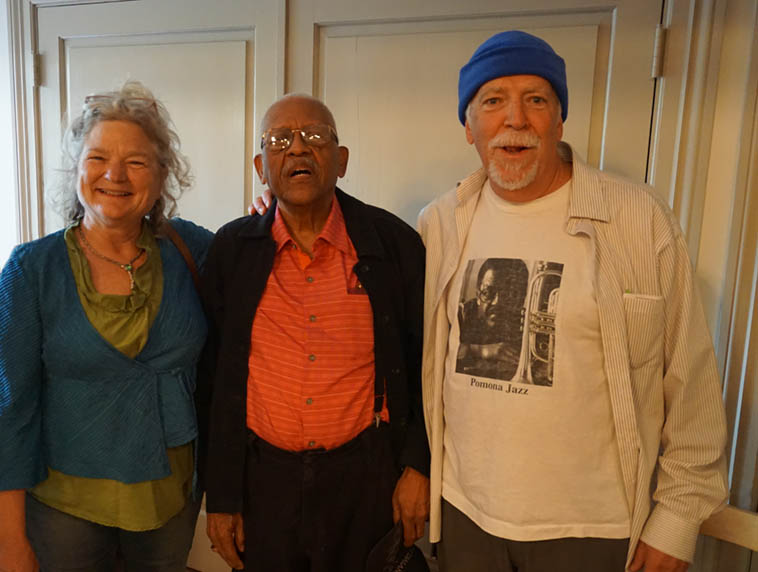 And look who else showed up! Our old friend, master of all clarinets, Beth Custer, with Bobby and MW (note my teeshirt ———- I was Bobby’s “roadie” on this excursion to the north —– July 28, 2o18 photo snapped by my long-time friend George Brooks —– (Beth’s band Clarinet Thing has kept Bobby’s composition “Sticks & Stones” in their repertoire for years, arranged for 5 clarinets – see their cd AGONY PIPES AND MISERY STICKS) 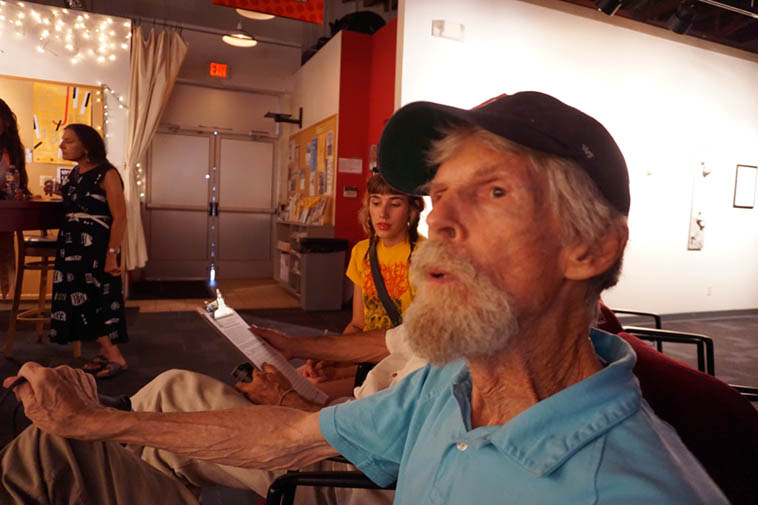 Jonathan Baldwin has proposed we collaborate on a radio show on the living Philadelphia Tenors (Benny Golson and Jimmy Heath) – John is a cornetist who caught the Jazztet on a double bill with Ornette Coleman (Golson was in the Jazztet) at the Five Spot in November 1959 —- We’ll talk about that when we run this show down on Thursday August 16 —- photo by Mark Weber – (John had a couple of his paintings in the Artspace group show) – July 15, 2o18 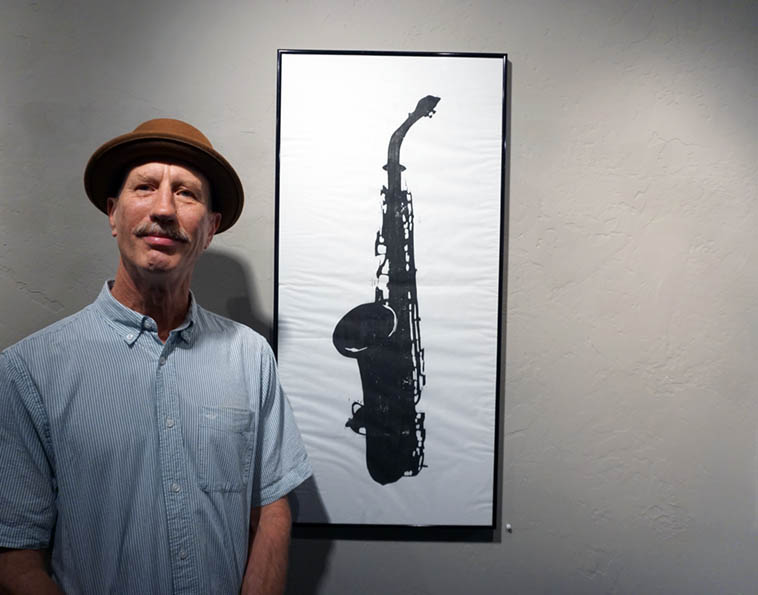 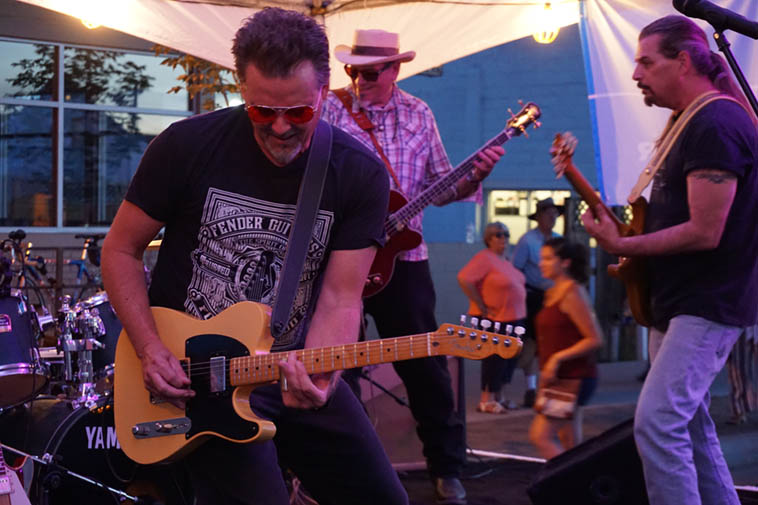 The Memphis P Tails – a local New Mexico electric blues outfit —- I first heard the P Tails (I still don’t understand that name) about 25 years ago as I was traversing the University and I heard this scorching crack open the sky blues music and says to myself: Holy shit, a REAL blues band, in New Mexico? Over the years I catch them here & there and they never deliver less than full bore, an electricity and punch to bring back my old memories of hanging out in the bars of Watts —— Here they are kicking up sand at Summer Fest on Central Avenue – July 21, 2o18: Darin Goldston (guitar & vocals), Skinny Dinnie Ferguson (harp), Mikey Wright (guitar), Jeff Sipe (bass), Charlie Brown (drums) —- photo by Mark Weber 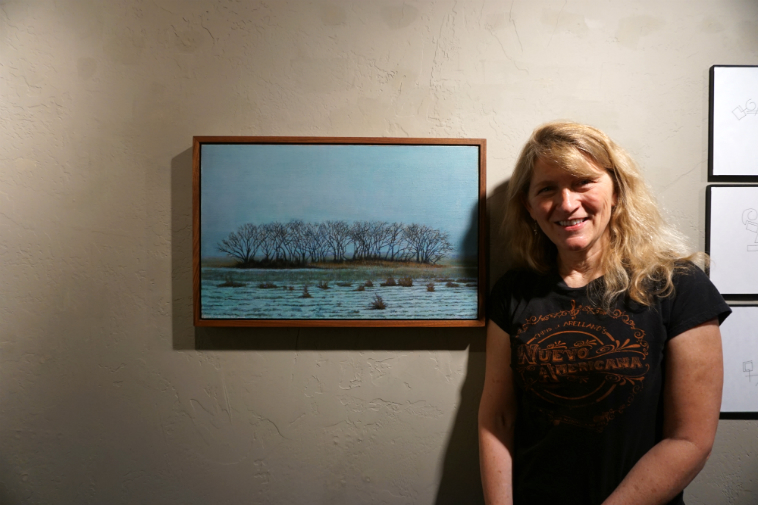 I’ve always loved Susan Holmes posters she makes for the band Alpha Cats with whom she plays bass, and I’ll take credit for tipping the curators to get her into this group show Musicians Making Art, but I didn’t know she was an exquisite oil painter, whew, so much talent —- That’s Susan and her painting “Bonanza Creek Cottonwoods, Looking East” (2o17) —– “It’s Kansas,” she told me – photo by Mark Weber – July 15, 2o18 (you can see my 3 doodles To Susan’s right) 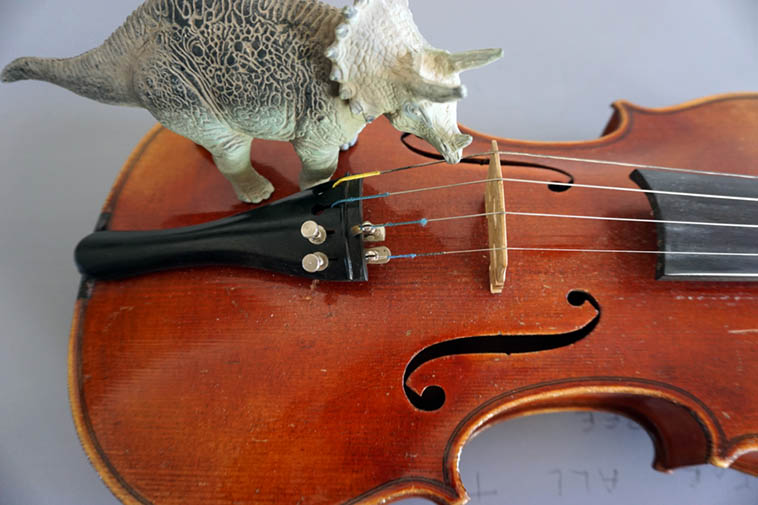 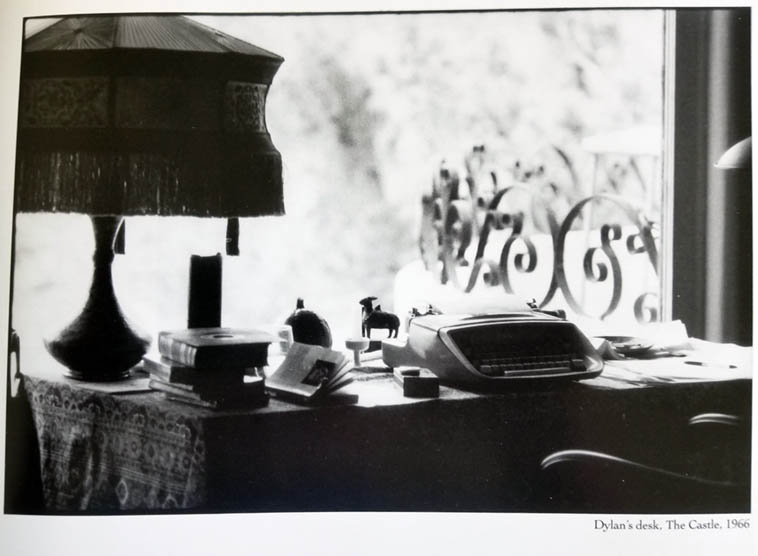 My favorite photo of Bob Dylan, and he’s not even in it, not bodily anyway. Taken by Lisa Law in her great book FLASHING ON THE SIXTIES. A writer’s desk. Did Homer’s look any different? Or the monk who composed Beowulf? I’ve surprised acquaintances who have asked about writing when I tell them they are lucky not to be under the pall of writing, it’s like a disease. A disease that you learn to live with, it’s always there, word puzzles, phraseology, the search for the opening sentence, do I put these thoughts into a poem or an essay or a short story? Words tumbling around all the time, taken over your brain. I have no idea what it’d be like otherwise. I’ve lost touch with reality. All America is in a depression anyway over the darkness that has overtaken our government, so my condition goes unnoticed. Rare this depression, our idealisms have blown up in our faces. “Ain’t it just like the night to play tricks when you’re trying to be so quiet?” (Visions of Johanna) It was 101 in Albuquerque yesterday, very rare to be that hot, and now this morning wailing winds, the Great Turbulence is beginning, I’m joking of course, sort of, the collapse of the natural ways seem to be near . . . . “Cinderella sweeping up on Desolation Row . . . .”