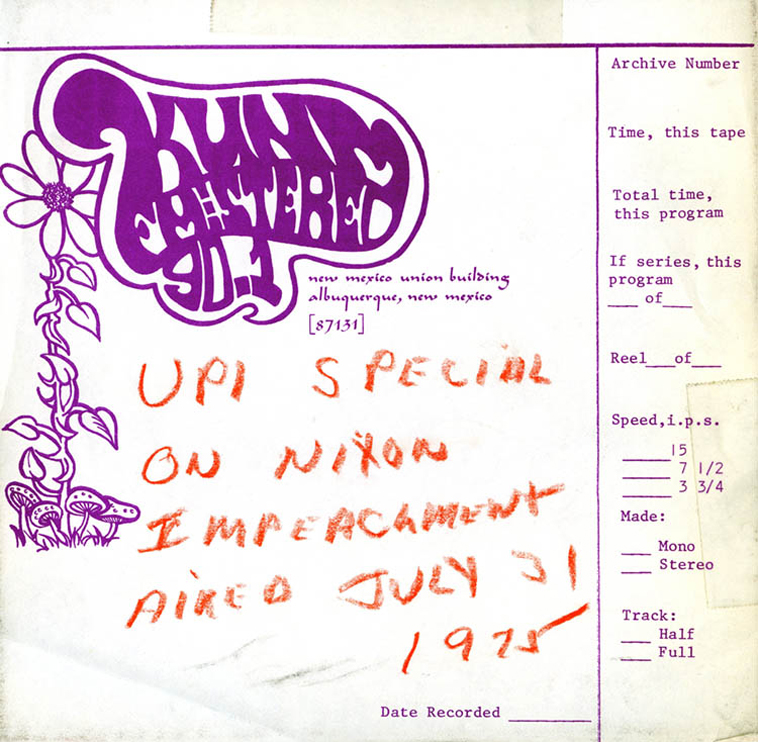 Reel-to-reel tape box —- KUNM 1975 —- If things get back on track in this country maybe there’ll be another similar broadcast, soon

In a capitalist free market system we always search out the cheapest least expensive choice —- competitive pricing: same item, cheaper over here at this store —- naturally, we go for the bargain, we’re not Mr Scrooge, but we like to make our money stretch —- Now, with the proliferation of big box stores this has back-fired on us —- these big boxes do offer one-stop shopping but on the down side they have undercut the small independent specialty shops and with that we are losing a knowledge base — Albuquerque used to be a bookstore town when we moved here 27 years ago, I never saw so many bookstores in one town, out here in this island of humanity in the middle of a desert? They like books, but now we’re down to like 3 independents. The big boxes squeezed them out. Records stores took a nose dive, too. Shoe stores fell victim to on-line sales (who’d buy shoes they never tried on?) Camera shops, the same demise. Downtown small town America is becoming a ghost town as FedEx and UPS have their own giant hangars at the airport. Remember Rupert’s Plumbing on Lomas with that ultra-cool neon monkey wrench over the door? Gone. Record stores are only limping back as used vinyl collector shops, for eccentrics like me —-

The problem with this volume-store out-selling local competitors is we lose a knowledge base —– I defy you to have an aisle clerk at a big box explain how the replacement capsule works on your dripping faucet —- Or, what better than to have an actual pedorthotist fit your shoe size? Or, when I was a teenager in Aron’s Records (Melrose Ave, L.A.) and have Manny Aron see what I was buying and point me to Honegger, Alban Berg, and Luciano Berio, instead of all that Zappa and Stravinsky I was prone to, haha (I still love both) —- There is no placebo for the Real Deal, we are impoverished without this knowledge base – SAME with radio, your listening is an investment of time, and you have a myriad of choices, and you are probably as particular about your media choices as you are about your grocery shopping and how you spend your money, stretched or unstretched —-

We at KUNM we are into our Fall Fundraiser campaign and we’re asking for your support —- This is radio not run by a corporation, this is human- powered love-fractured radio —- music shows and radio news locally produced by a knowledge base, not a monopoly, this is the opposite, what they call Value-based Pricing, we’re part of the infrastructure: the water lines, electrical, highways & byways, farms, what makes the world tick, AND the airwaves —- Capitalism is competition, and we’re all for that, and our trump (pardon the use of this idiom, he’ll go away, before long) . . . and our trump card is we deliver content jumped-up by a knowledge base and a personal relationship, distributed for free, I might add, universally available (Richard Towne our Gen. Mgr. says every family home has 5 radios, counting their cars!), commercial-free and covering nearly all of New Mexico and kept healthy by your support – Let’s keep education alive —-

We appreciate your attention and your time, we are always asking ourselves: What is necessary? What is real? Give us a call at the pledge line: 505-277-4357 or pledge on line: KUNM.org —- Thank you 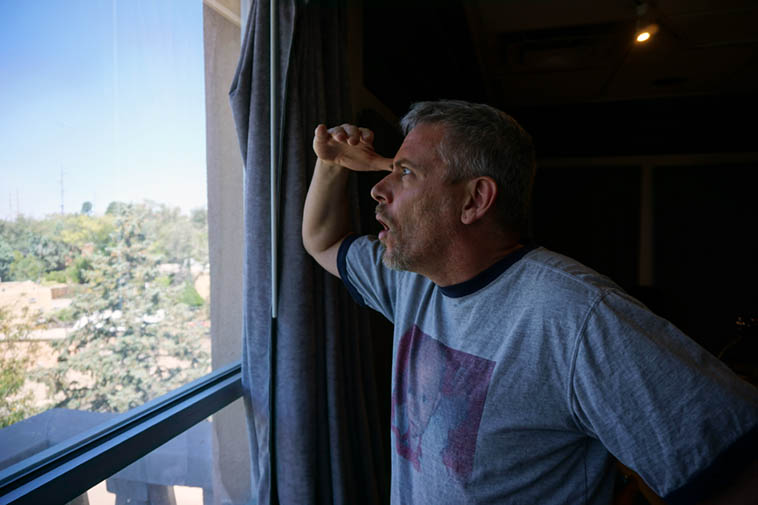 Bonnie Brandon Kennedy checking the horizon out the Official KUNM Weather Window, Onate Hall, University of New Mexico – Sept 13, 2o18 —- Brandon is probably the most comfortable person I’ve ever seen on a live mic, and I suppose he needs to be considering all the guests he brings on for you to hear about —-photo by Mark Weber —- We’d appreciate your support in these turbulent weather times, please call this week: 505-277-4357 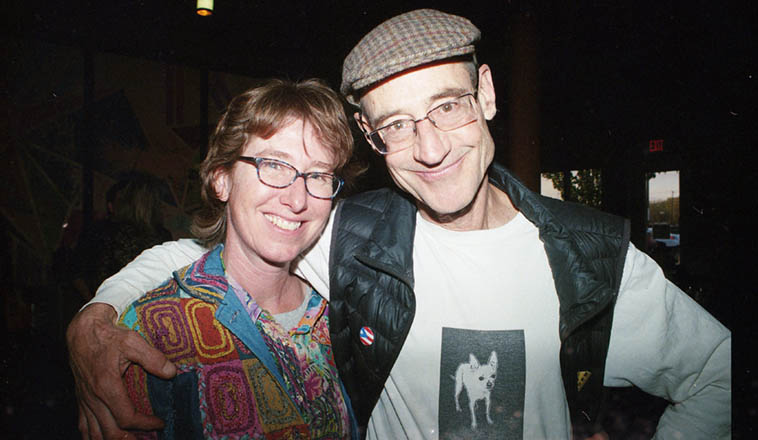 Katie Stone and her minder —- You do a Children’s Hour for however many years and you’ll need a minder, too —- Actually, that’s her husband Andrew, a guy who knows a lot about computers and the creation of the Internet Universe —– at Mary B’s retirement party April 13, 2o18 – photo by Mark Weber 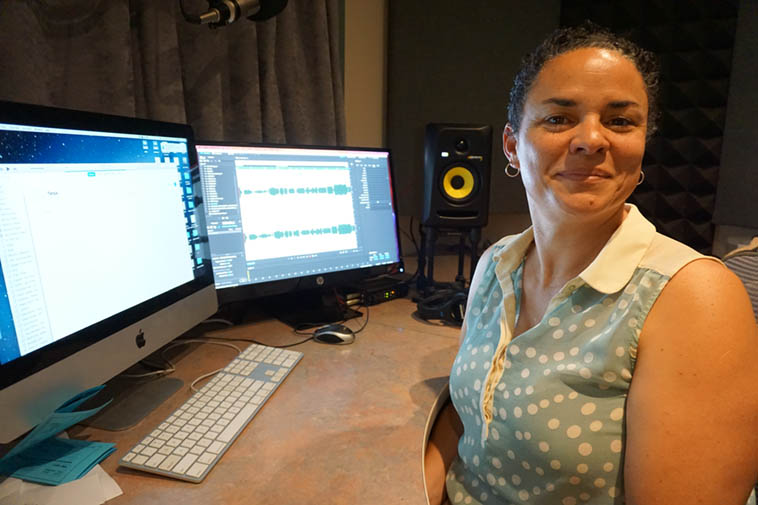 Tanya Cole in Studio D (we have 4 production studios) where she creates many of the advertising spots you hear on KUNM —- I think she is now the late afternoon/early evening race horse that takes care of News & All Things Considered (that’s a very busy two hours, you have to be cooking on all cylinders, or, to keep my metaphors a little more parallel: You have break from the gate at a full gallop) —- photo by Mark Weber 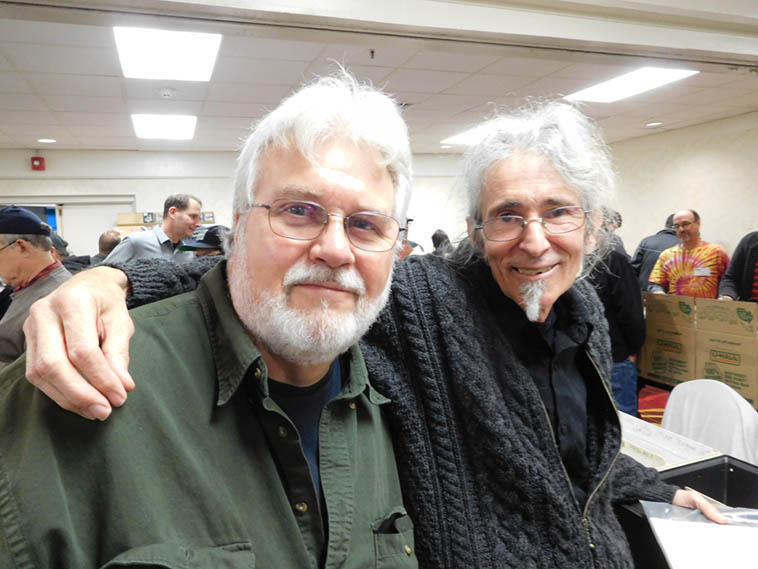 Radio hosts John Breckow and Karl Stalnaker appropriately at the ABQ Record Convention – April 30, 2o17 – photo by Mark Weber —— John subbed on Home of Happy Feet a few times but mostly did Friday All That Jazz until earlier this year when he bowed out —– I have long said that Home of Happy Feet is the greatest radio show on KUNM, talk about knowledge base, this show is very deep in the well, plumbing to the core of humanity’s natural instinct for music making —- We even have a specially rigged-up 78 turntable for this Tuesday night show so Karl & Barry (RIP) can play the old shellac 78 revolutions per minute 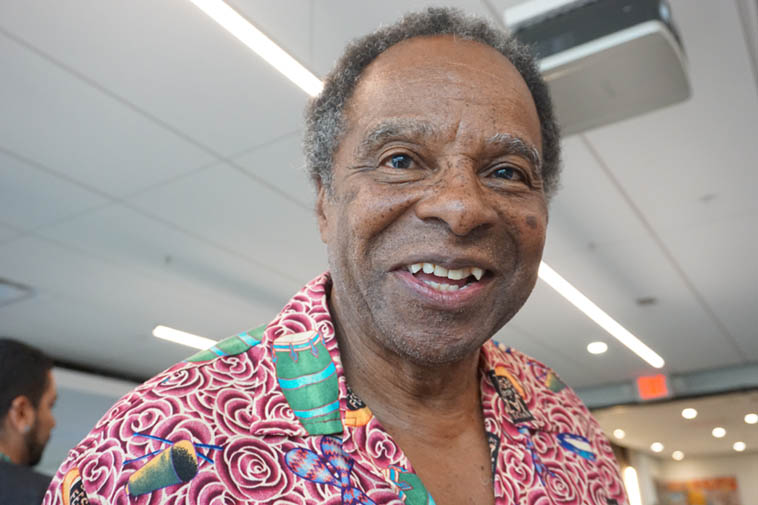 Putney Thomas used to alternate Wednesday nights on the blues show with Dave Denny (RIP) remember him? Dave loved the music so much he forged forever in my mind that “blues” is pronounced with two syllables —- Bing bang boom, blues up and blues down, blues goes around, and that’s Putney the Exuberant – photo by Mark Weber 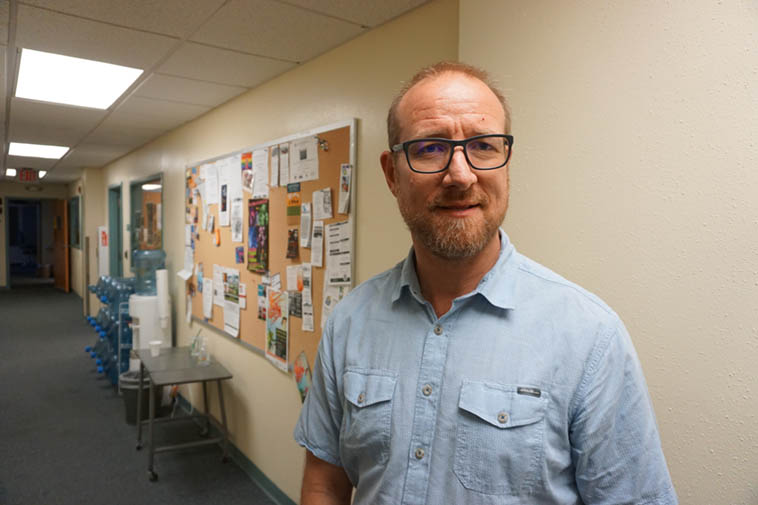 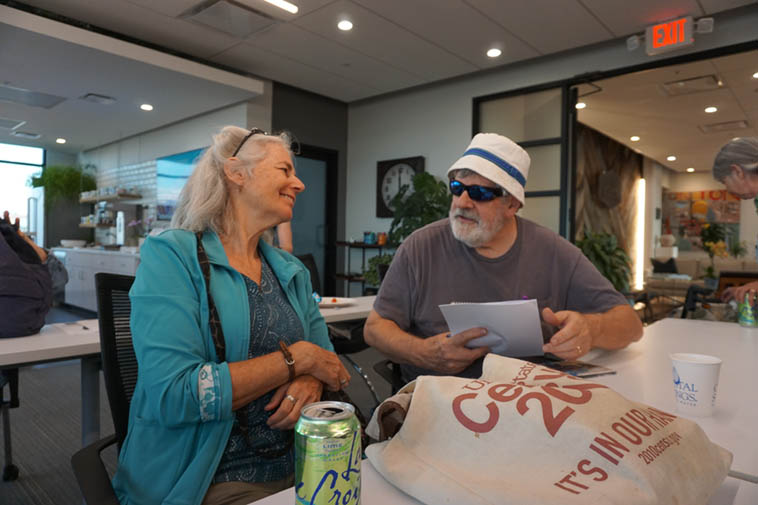 The alternating hosts of Friday’s Afternoon Free Form: Peggy Hessing & Harry Norton not long ago (Sept 16) —- Harry Norton amazes me —- “Norton” is Anglo-Saxon for North Town, but he was raised in the south of merry old England on the hillside of Glastonbury Tor (tor = hill) where King Arthur is buried —- No wonder Harry has all the idealism of Avalon flowing through his airwaves —- The part that amazes me is his reach, his ability to get into so much different and varied music out-distances me by a long shot, he’s the guy William the Conqueror missed with his long bows (see 1066 AD) —- Glastonbury (ie. Harry) told me that when he caught John Mayall’s Bluesbreakers in London he was changed forever (in fact, our station manager Richard says that when he heard TROUT MASK REPLICA – on the radio – nothing was ever the same, again, either) AND Harry’s dad caught Fats Waller in London back in 1939! —- photo by Mark Weber 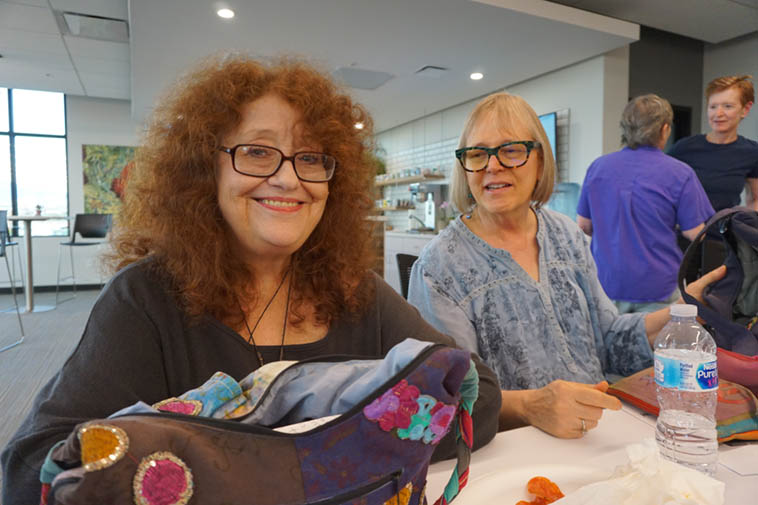 Patti Littlefield holds down Wednesday noon jazz with aplomb (there’s a word I’ve never used before) – Cris Nichols sitting next to Patti is Membership Coordinator at KUNM and a jazz host when we’re lucky —- Sept 16, 2018 —- photo by Mark Weber 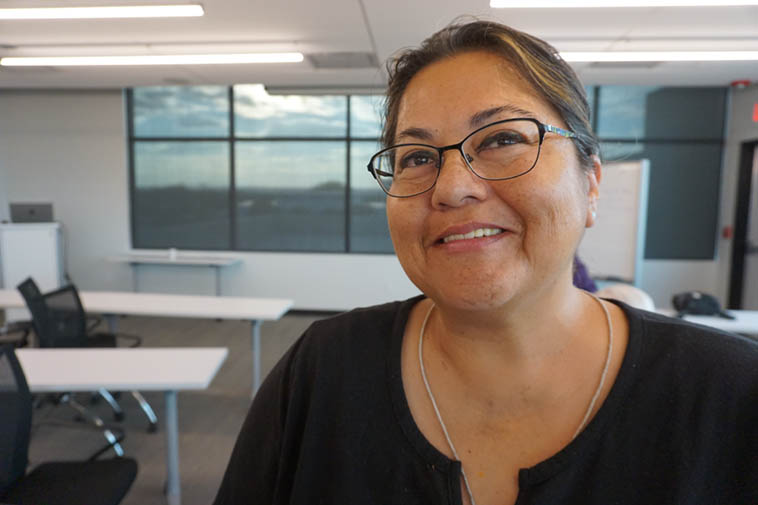 Interplanetary Janet makes regular visits to Earth and brings Rice Krispies Marshmallow Cubes, but mostly she’s here on Saturdays Noon-4 on Singing Wire —- I saw her with one of those baked Cubes the other day and said “Wow, I haven’t had one of those since I was ten!” So, she went back to the spaceship and brought me one as an interplanetary gift of peace & friendship —- Janet lives at Acoma Pueblo (I don’t know who bestowed the “planet” -part of her name, it wasn’t me) – photo Sept 16, 2o18 by Mark Weber 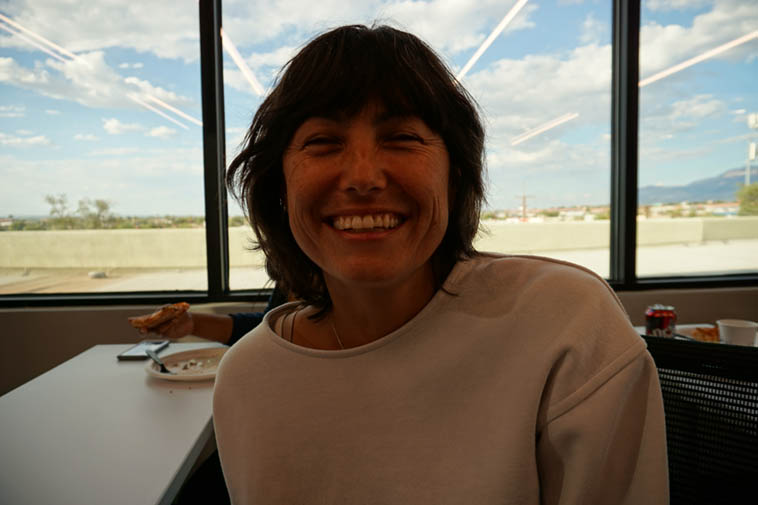 That’s Albuquerque behind Chanda Shaw and contrails —- I call her Chandragupta as she has the same strength of character and unreserved positivity as her namesake Chandragupta Maurya who stopped that marauder Alexander (the Not So Great) in his tracks at the Indus River circa 331BC —- She works in Development Dept coordinating underwriting, whatever that is —- writing under the rug? – It takes a lot of brains to be friendly, so I think she must be really smart —- photo by Mark Weber 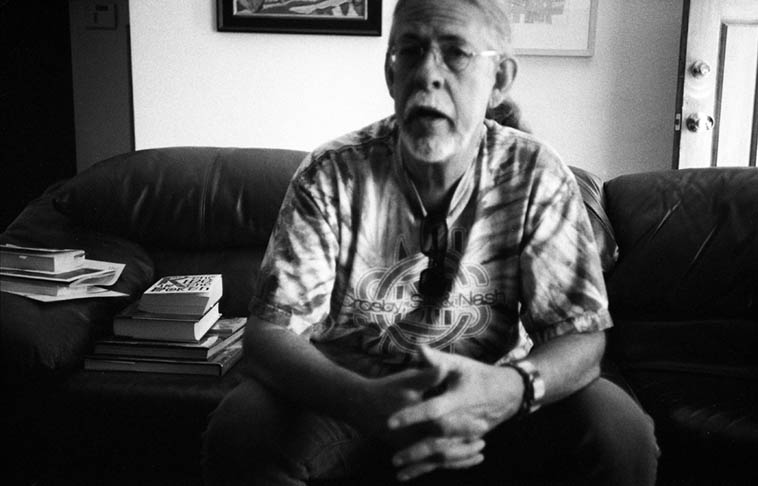 Tim Oswald is first-call sub on PRHS Psychedelic Radio Head Shoppe and directly supports my contention of a knowledge base, but with a twist —- When guys like Tim and Scott (the Doctor) age out (never! The Sixties live forever!) they will be irreplaceable, for the pure reason that they lived the Sixties and carry that dream in their heart & souls —- Tim grew up in Albuquerque, so did Scott for that matter —- Check ‘em out Saturday nights at psychedelic ten on KUNM —- That’s Tim at my pad May 11, 2o18 reminiscing about bota bags and Allman Brothers concerts (Hey, Tim, that box of No.2 Ticonderogas you gave me is almost gone – I love those pencils)(Tim designed the super-time-warp poster for PRHS) – photo by Mark Weber 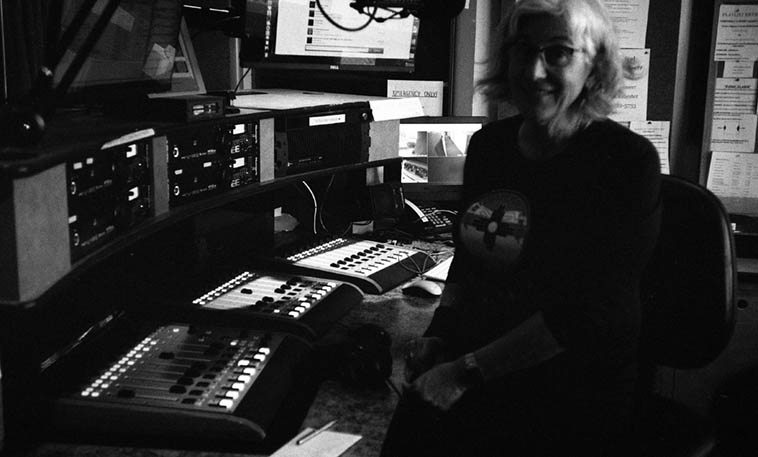 Rachel Maurer is pronounced Maur-ray, which sounds French to me, even as she’s from Texas, and is MOT to boot, (MOT = Member of the Tribe = the Lost Tribes of Israel) But, she’s been in New Mexico the longest and on KUNM playing the real deal since forever, and I don’t mean no fruity-dooty singer song whiner baloney, she plays gut-instinct Woody Guthrie folks songs (yes “folks” with an S) – That’s her in the control room spinning Saturday morning FOLK ROUTES March 10, 2o18 – photo by Mark Weber 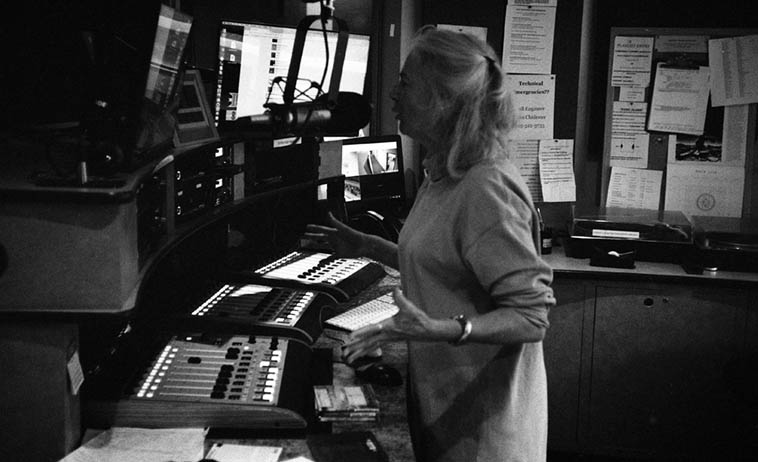 Peggy Hessing cares so much about the listener that she puts me to shame —- She spends hours and hours looking and listening to everything under the sun searching for things she wants you to hear, investigating all manner of expressions: meaningfulness is what she’s after, her concern is boundless —– Peggy on the air March 12, 2o18 Friday Afternoon Free Form – photo by Mark Weber 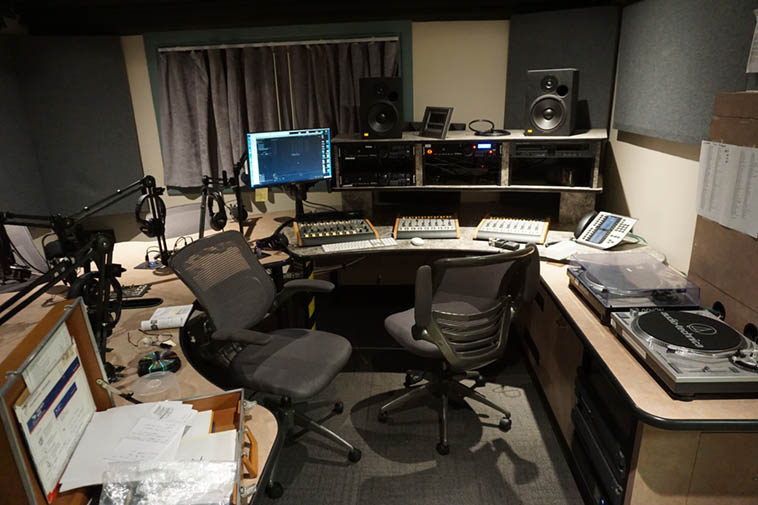 Studio C —— Over the years this production studio has changed as we’ve outfitted it with new gear, and I have spent a lot of time within those four walls these past 22 or 23 years (that’s my briefcase in foreground) A lot of work goes into producing radio —- photo by MW 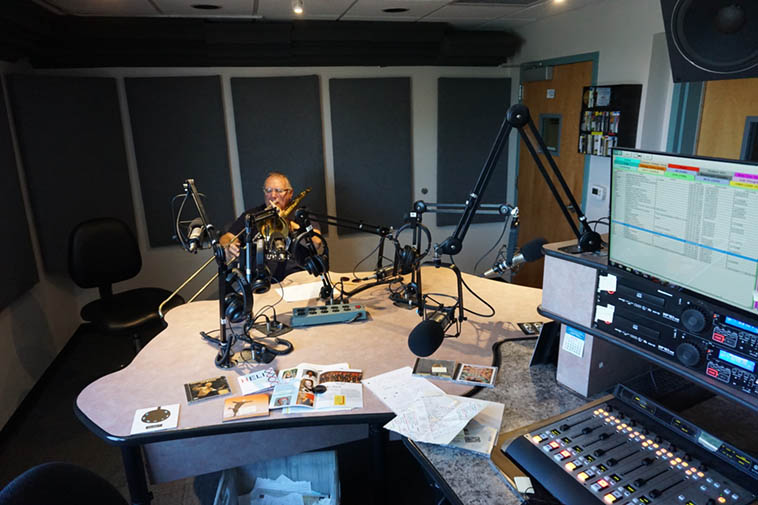 That’s what KUNM control room looks like when a trombonist is playing in it —– Michael Vlatkovich from Los Angeles on one of his many visits to KUNM – June 21, 2o18 – photo by Mark Weber 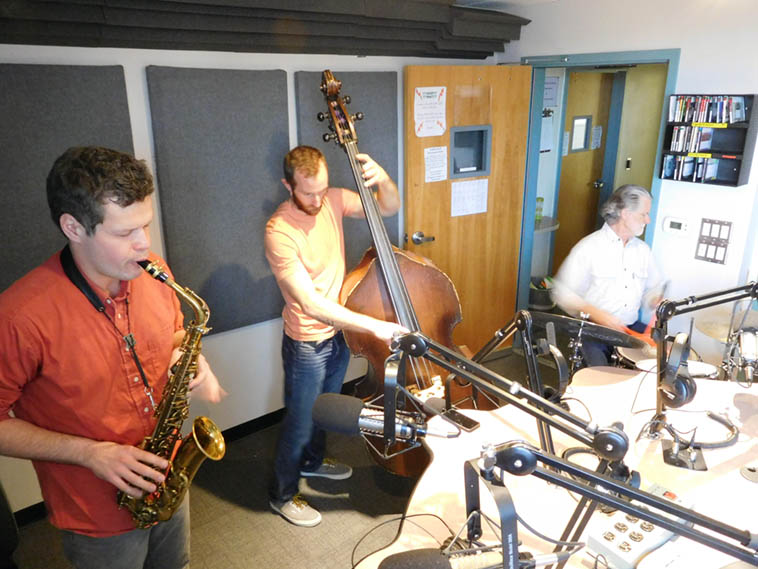 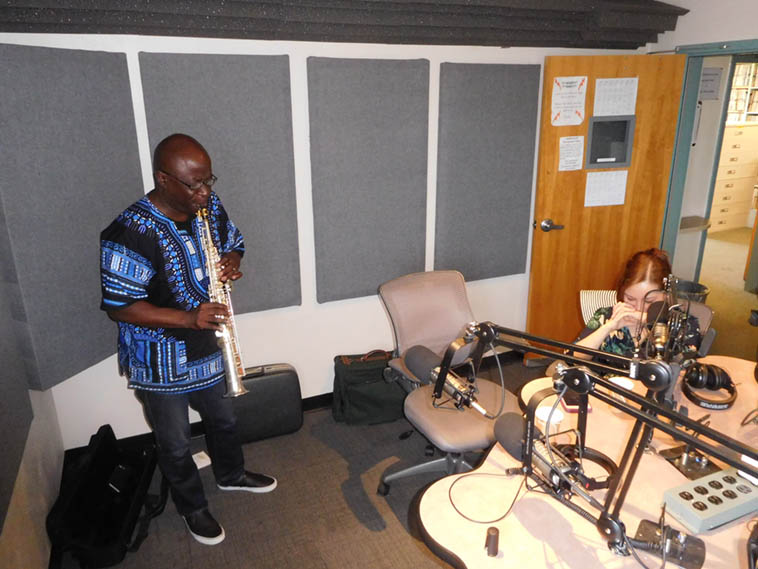 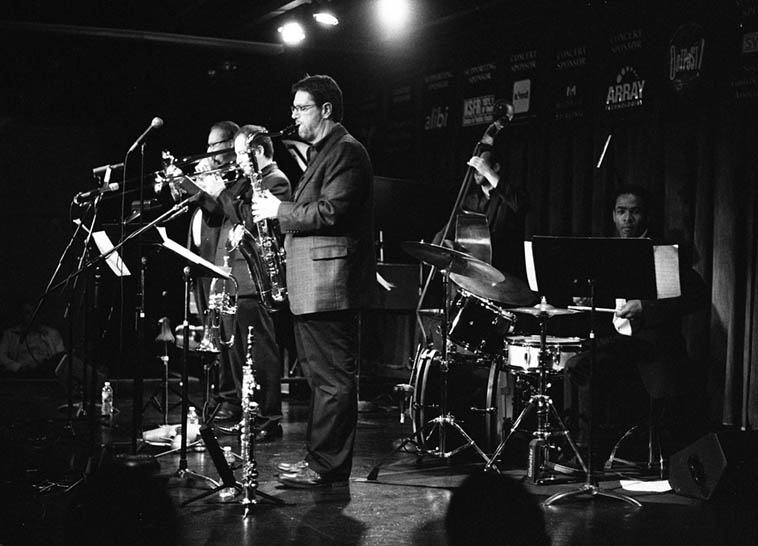 We listeners of Noon Jazz All That Jazz at KUNM are really lucky to have Glenn Kostur spinning the wax on Fridays —- That’s him playing tenor with his ensemble Six of One Sextet – December 4, 2o14 @ Outpost Performance Space —- Colin Deuble (bass), Steve Figueroa (piano), Chris Buckholz (trombone), Paul Gonzales (trumpet), Arnaldo Acosta (drums) —– Glenn was MD (music director) for Maynard Ferguson way back when and has been for 20+ years the director of Jazz Studies at University of New Mexico – photo by Mark Weber 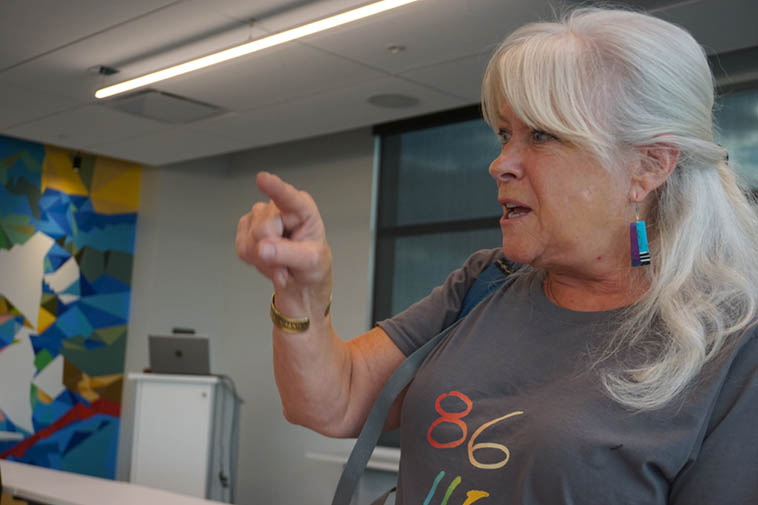 And here’s the new kid on the block, Allison Davis, who has taken over for Paul Gonzales, who’s up against it right now and needs your prayers —- That’s Monday jazz —- Allison picks good tracks, and she understands the importance of context when programming a show, I think she’s from DC? We’re still getting to know her – photo by Mark Weber 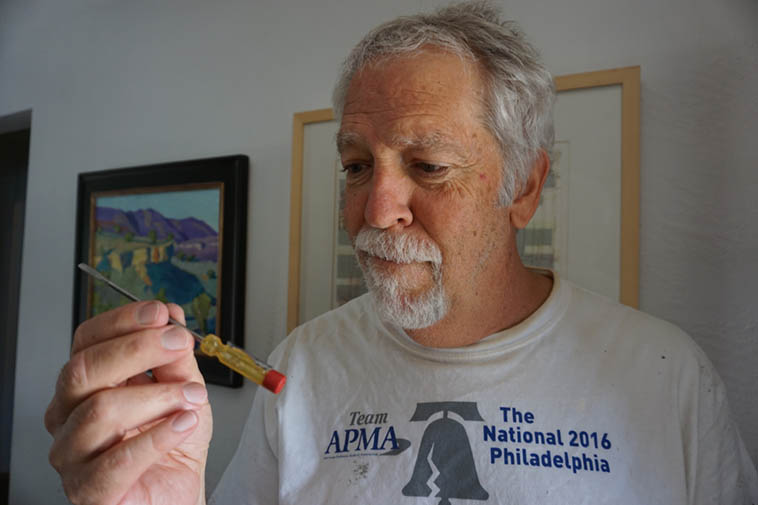 That’s me pondering a screwdriver (Craftsman, obviously) that my Uncle Jack gave me when I was 5 to work on my Erector Set —- I still use that tool, works great removing set screws in bathroom fixtures (we’re remodeling our master bath) – photo by Janet at 725 on Sept 1