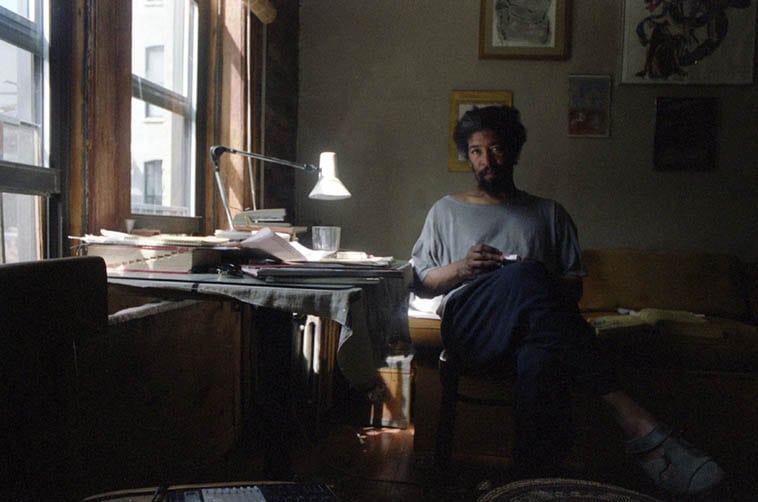 All bass players have cars
The Empire State Building is 102 stories
Pizza by the slice is fading away
7-day Unlimited Metrocard is $32
Albuquerque probably (maybe) has 25 elevators
Can you imagine how many elevators has New York City?
I’m not sure I have ever seen a bass on the subway
It occurs to me: Never arm wrestle a bass player
Not unless you don’t mind being shot down
Bass players have cars
The bass is cumbersome
AND (I hope no thieves are
reading this) ponderously valuable with deep provenance
Probably why there are so many beat cops around
Lincoln Center: all those brilliant kids you see walking
around with violin cases and basses (Julliard is there)
Sometimes you see cops on horses, more often than
this poem suggests, actually
But, bass players have cars (one imagines that the showroom where
basses are for sale, they also have station wagons)
If you have a car it is wise to ask a bass player
where are
all the secret places to park?
I suppose drummers have cars, too
But, nowadays drumsets are provided at the clubs AND (again,
I hope no thieves are reading) drummers bring their own
cymbals, those old Zildjians, ancient bequeathed Turkish
cymbals (next time you’re at Birdland or the Village Vanguard you might be
hearing cymbals that played with Prez,
or Bird
or Lennie Tristano)
But this poem is about bass players, and elevators
But I might be done with the elevator part
Not uncommon to see spritely well-formed young people
with yoga mats slung over their shoulders —- Not many
my age, or my gender, I wonder why?
I once jumped into a yoga studio (in Yoga World this is
known as “a walk in”) spur of the moment
when in my Sherlock mode I wanted to investigate
a hunch, which was
inside this yoga studio, so I took off my shoes
and became one in my street clothes —– New Yorkers entertain
a certain mystique for New Mexico, and there I was
with all these gorgeous girls Arda Chandrasana in my walking
around tactical pants —- Mostly I was there to absorb the cosmic vibes
coming through the red bricks, having noticed that Connie’s
old studio on East 9th Street abutted the back wall of this yoga studio
Red bricks! Everywhere! Earlier
I was standing on the corner of Third Ave & 9th
when a pleasant voice says, “You look lost” and among the throng
there’s this nice lady and I say, “Uh, yes, where is Astor Place?”
(Connie had once told me that she lived at Astor Place)
The lady with her grocery bags says, “You’re standing on it” and
smiles
I had been eating an apple and I say “Really?”
And she points out Cooper Union, which I had already discerned,
I can’t ever walk past Cooper Union without thinking of Abraham Lincoln
giving his great speech there in February of 1860, or that
Connie recorded in concert her great solo album there 124 years later
She only had to walk around the corner and sit down at the piano
Can you imagine? Ghosts everywhere, and
this wonderful kind person who just feels like talking, tells me
about the Astor Place neighborhood she’s lived in 40 or so years
I love New Yorkers, contrary to popular belief they are actually
quite friendly!
Maybe it’s the days and times we live in?
From what I understand New York was crime-ridden in the 1970s
You’d get a gun in your face and your bass reapportioned in a minute
Benny Golson tells the story in his autobiography of how & why
Horace Silver left NYC in the 70s, when he was going out on tour
he asked his door man to keep an eye on his place, and oh boy, he
watched it REAL GOOD, and had his cronies evacuate the apartment
down to the last bookmark, clean as a whistle, therefore, Horace split for
the Coast, lived out his years in Palos Verdes over-looking the Pacific
That apple was a Honeycrisp now that I think of it, I stepped outside
the 9th Street bodega and sunk my teeth into it and my eyes swirled
and popped wide open and I pulled it out and looked at it afresh
when sitting on the flower pot bench a guy in a smock smoking a cig
says “Good huh?” and I said, “WOW!”
“It’s a Honeycrisp,” proud of his apples
I missed the 1970s in New York, didn’t get there until 1986 after
they let me out of the hoosegow (that’s what they do in California, is lock
you up for having anything to do with drugs) and by 1986 things had
cooled out and New York was easier
Less dangerous for us simple-minded people
Speaking of which: They tell you not to walk around like you’re a tourist
Staring at things like the Empire State Building
The bad guys put the finger on you
Well, gawd damn I AM a TOURIST, and if the bad guys want to tangle
with me they better bring an ambulance to the party, I survived
the California Penal Colony and I can certainly survive East 9th Street
or wherever (I’m getting to the age where
I might want to reconsider that mindset —- scrappy Ulster-Scot
that I am) . . . . Anyhoo, I’m rambling . . . .
100,000 elevators? 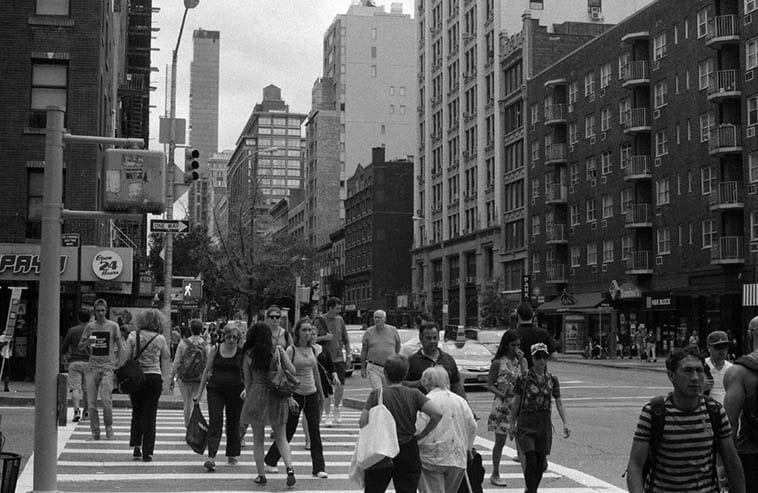 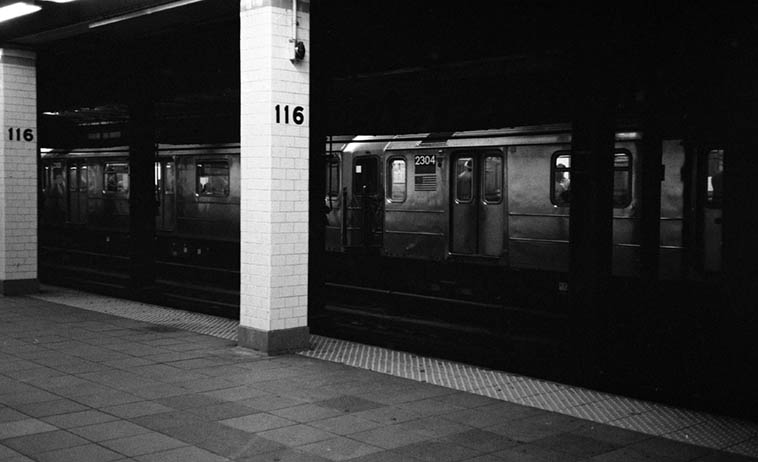 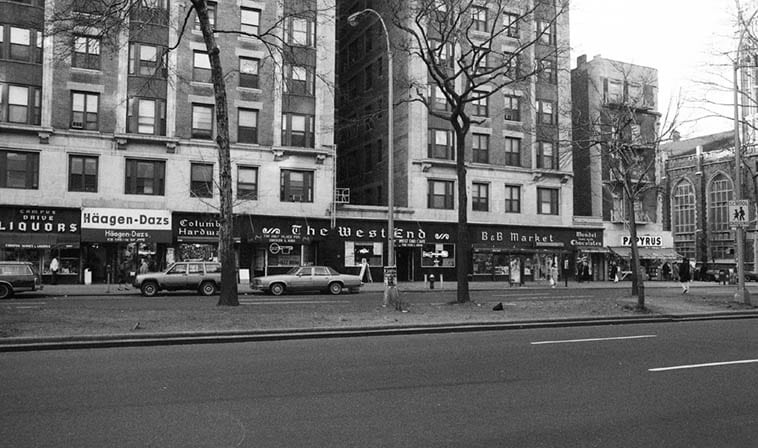 If you know your Beatnik history, then the West End Café looms large as a Kerouac hangout when he was in & out of Columbia, but what fond memories I have of that Haagen-Dazs sitting inside late at night with Janet & her sisters luxuriance ambrosial clouds of ice cream symposium — 113th & Broadway – March 1987 – photo by Mark Weber 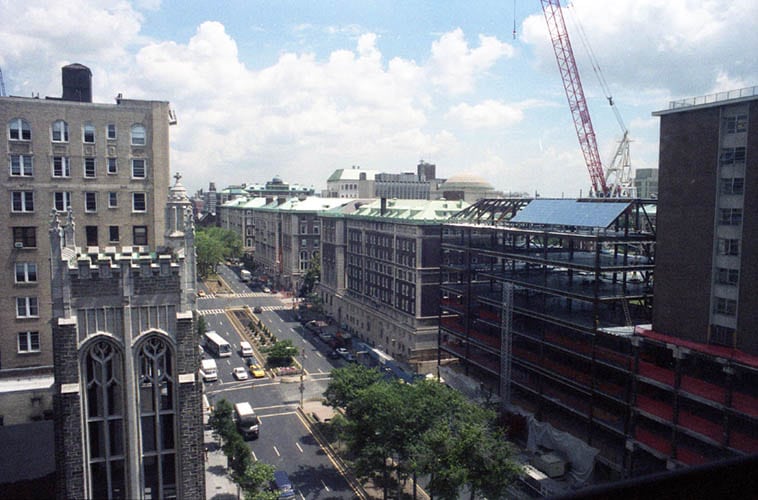 I often stay here at Janet’s sisters’ place —- this view is burned into my memory: Looking north up Broadway from the 10th floor of Forest Chambers – That’s Columbia University where Janet’s sister Barbara is a professor, and that’s Broadway Presbyterian at 114th Street – July 1, 1997 Manhattan – photo by Mark Weber 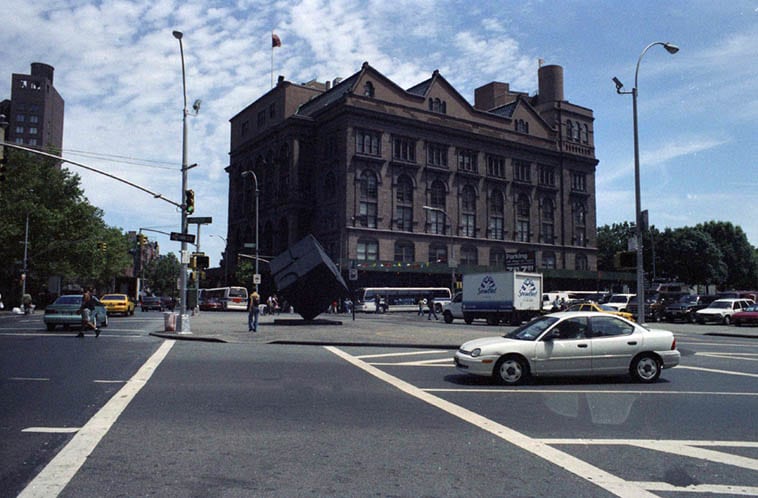 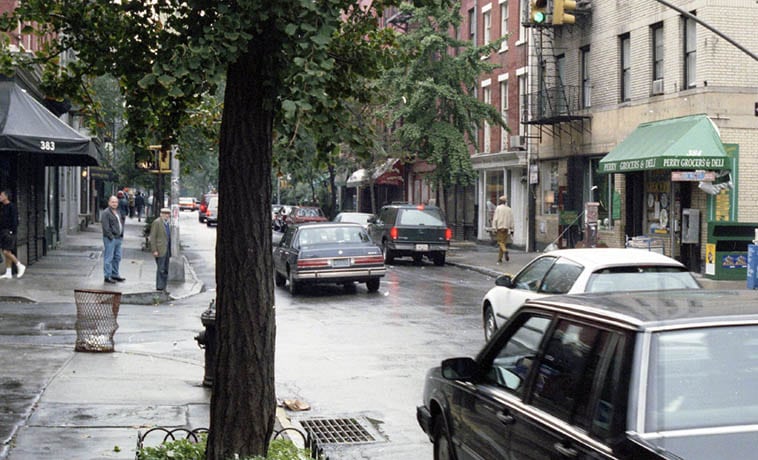 Perry Street in the Village —- September 27, 1992 Manhattan – photo by Mark Weber —- “Well, I think that what you are looking for – what I’m looking for – is resolution. And I can get it in my paintings, finally, for myself. In my life, it goes in and out. I have it one day, and I don’t have it the next day. But that’s why being an artist is so great, because you can get that kind of satisfaction.” – Elizabeth Murray, 2001 interview in ART21 magazine 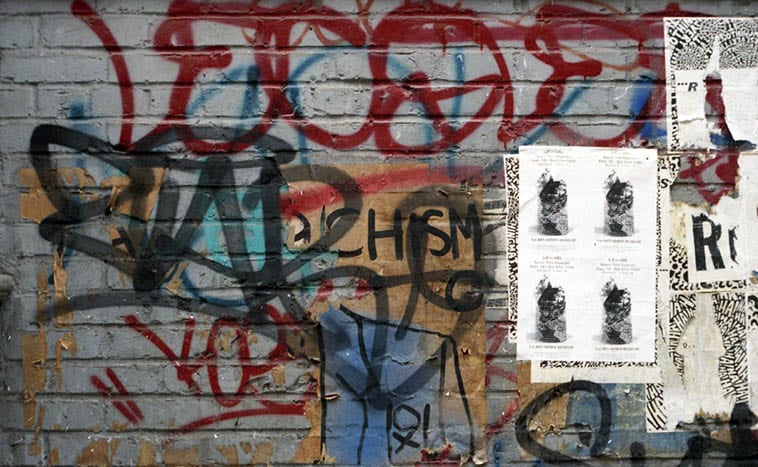 Soho – September 25, 1992 – photo by Mark Weber —- Connie once showed me a couple dozen photos she took of street art in Williamsburg when she first moved over there, I hope those are still around, somewhere 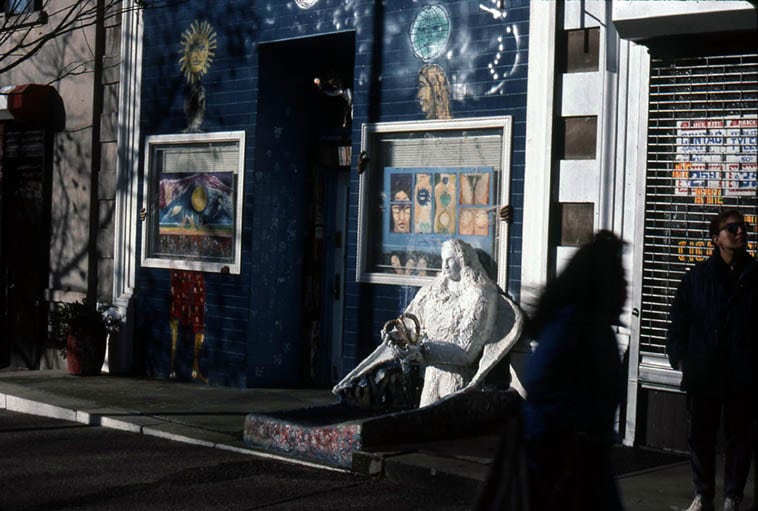 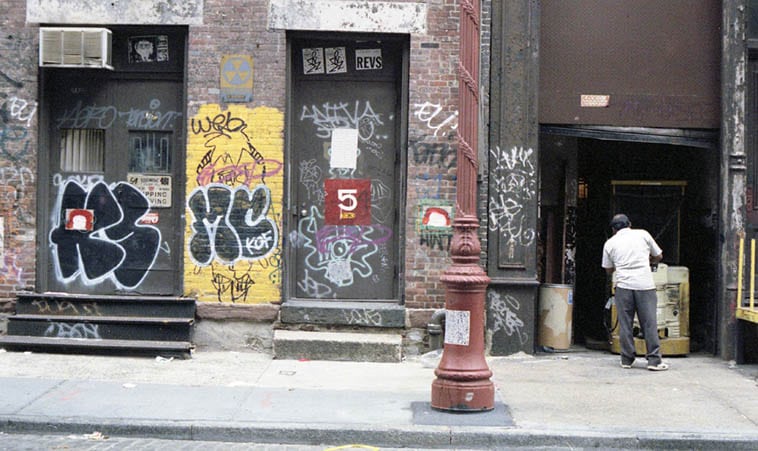 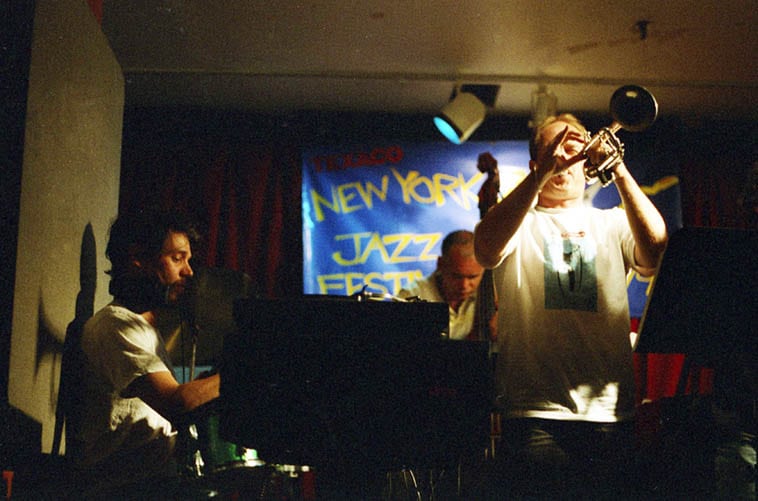 You cannot be in jazz and not have a relationship with New York City —- I’m not saying you have to go there —- only that it exists in your imagination, mythological and monolithic —- Every time I catch a cab from La Guardia and ride over the Triborough Bridge over the Harlem River at 125th Street I just flip out seeing again how HUGE everything is, it’s like going from New Mexico into Utah – New Mexico has some amazingly huge red rock mesas and canyons but Utah is scary —— DJ Olive (turntables), Mark Helias (bass), Dave Douglas (trumpet) at Knitting Factory as part of Uri Caine Plays The Music of Gustav Mahler w/ Danny Blume (guitar), Dave Binney (saxes), Barry Altschul (drums, Uri (piano) – June 29, 1997 – photo by Mark Weber 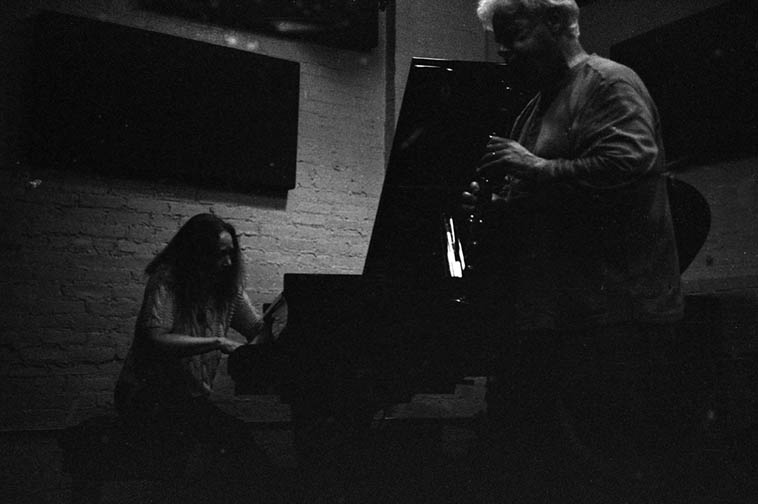