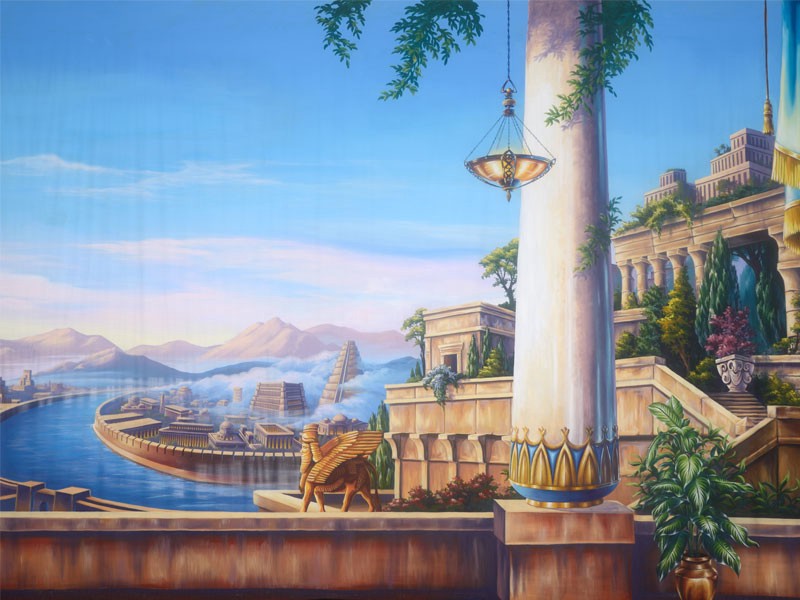 Maybe this would help
The script is hazy, I push the
reading glasses further up my nose
and reach to turn on the other
bedside lamp
The window shade is up
But still, not enough light
There are clouds and storms
possibly, birds are chattering
in the trees and a solitary dove
coo-coo coo-cooooing
The dawn chorus
As I nose around a college textbook
called THE ANCIENT WORLD that
I picked up at a yard sale many years ago
It has the usual student margin notations
and underlining, various color highlighters
from the two or three undergraduates who have
used this book, but as is often the case
they start off great guns underlining and
highlighting up a storm, but peter out around
page 98 with “Nebuchadnezzar embellished
Babylon and made it a showcase,” says he built
the Hanging Gardens, which you’ll recall
are one of the Seven Wonders of the Ancient World
This well-written textbook composed previous
to the current theory that the Hanging Gardens
were some number of miles up river in Ninevah
on the slopes of the mountains
beyond which is Persia
all of a hundred years previous to Nebuchadnezzar

God bless all the students, and teachers, and
Archeologists, scholars, thinkers, and those who
Contemplate and ponder, God bless
The meditators and travelers, poets and priests
And gardeners and farmers, chroniclers of seeds
And time and the stars, bird watchers and
Boat launchers, hitchhikers and those who
Would pick up hitchhikers if they were not
A thing of the past, the past that
Is a splendorous hanging garden near a river
That flows out of the mountains
Beyond which is Persia