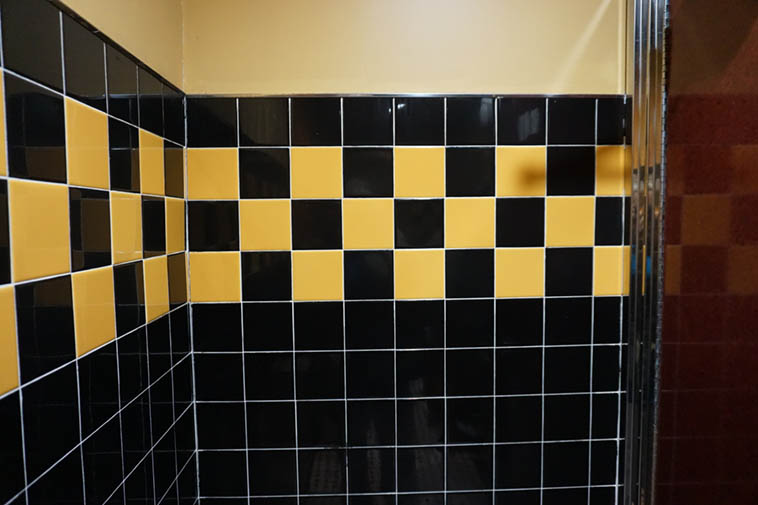 This color scheme really appeals to me, leave it to New York to be so hip, I came across this in the men’s room at the Metro Diner on Broadway, Upper West Side —- November 16, 2o18 – photo by Mark Weber —- Next time I have a chance to do some tiling I’m using it

Language is so fluid. Linguistics point out how slippery words can be.

“Most” is an Anglo-Saxon word and is not only an adjective, but also can be used as a noun, or even an adverb. Most languages are learned by example (mimesis) and spoken vernacularly, but written by intuition, we can’t explain why we know how to conjugate verbs within the complicated sentences (at least, I can’t) and don’t ask me to parse a sentence, these grammar are a mystery to me the more I study them. Then, we have all the idioms, colloquialisms, jive, wordplay, dialects, rhetoric, whathaveyou, etc &c.

In the early 1960s you started hearing the hip cats saying: “Hey man, you’re the most!” which is taking the word out of its conventional useage and turning it around. It’s acknowledgement and salutation.

“are” = intransitive verb (the 2nd person singular present indicative of “be” (Anglo-Saxon, again))

“the” = definite article, points straight at the object unequivocally, which in this case is “most,” which is to say: You got it all, baby (you’re a rich man, to quote the Beatles). It’s a quantifier: yr the greatest. It’s an intensifier, uncountable, You are the most.

So, there was no great design behind the name Jazz For Mostly, but then there was, the mind is a mysterious entity , and being a writer you learn to let it do its own thing, come what may, especially in poetry, and how poems arrive on their own.

So, Klaus is making a website for me. For years I had been writing for his website METROPOLIS, and now he says I need my own website, and he asks me what to call it, and I was busy with some other project, probably painting a house, and with no more thought than 90 seconds in the shower I came up with Jazz For Mostly, a delightfully ambiguous name. AND the only reason I’m telling you this is because I thought you’d like to know where this idiosyncratic cognomen came from: Out of thin air!

“Mostly” is technically an adverb. But, we also know it can be an adjective. But this “mostly” under discussion is a noun (when you add -ly to an adjective, such as this, it becomes a noun) AND in this case, it’s a proper noun, as Mostly is the name of a person. Who exactly, I haven’t a clue. Just some guy who’s on top of it I guess . . . . 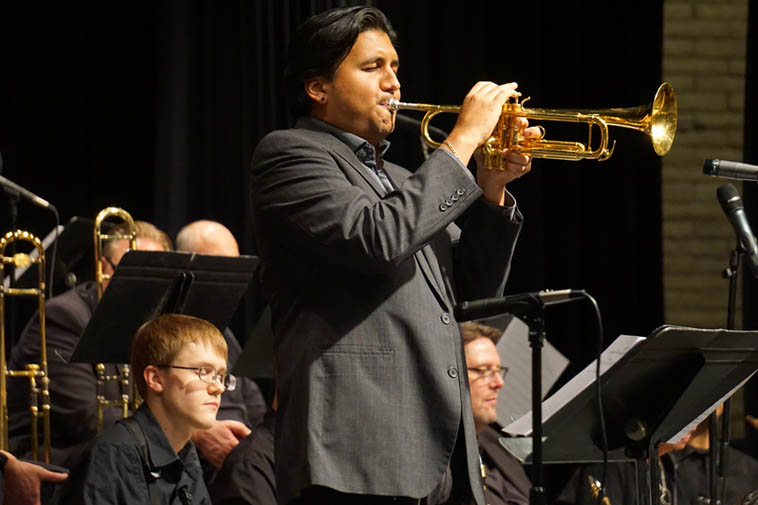 Check this guy out! Michael Rodriguez was new to me, but I won’t forget him now, wow, what a great lyrical & thinking man’s horn player —- Here he is in front of the Albuquerque Jazz Orchestra February 16, 2o19 —- He’s a New Yorker and Miami-raised jazz artist of supreme sensibilities —- photo by Mark Weber 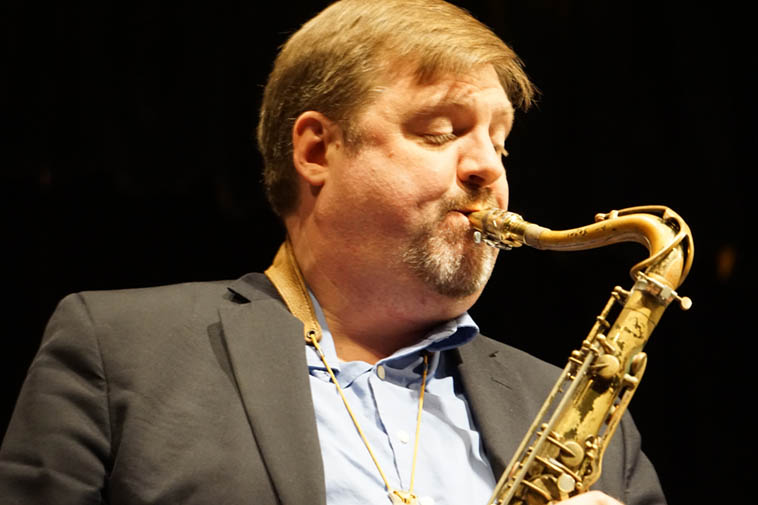 I first heard Joel Frahm on a Tessa Souter cd and was immediately interested and then he came to town! February 16, 2o19 UNM Jazz Festival, Albuquerque – photo by Mark Weber 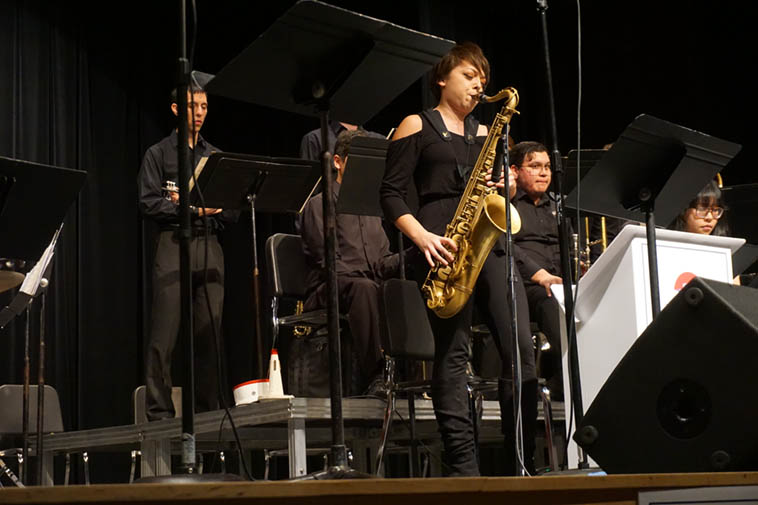 My new favorite tenor player Sarah Griego —- she jumped right out of Lester Young with this solo, never forgetting that telling a story is where it’s at, as a member of the University of Mexico Jazz Band under the direction of Glenn Kostur —- February 16, 2o19 —- photo by Mark Weber 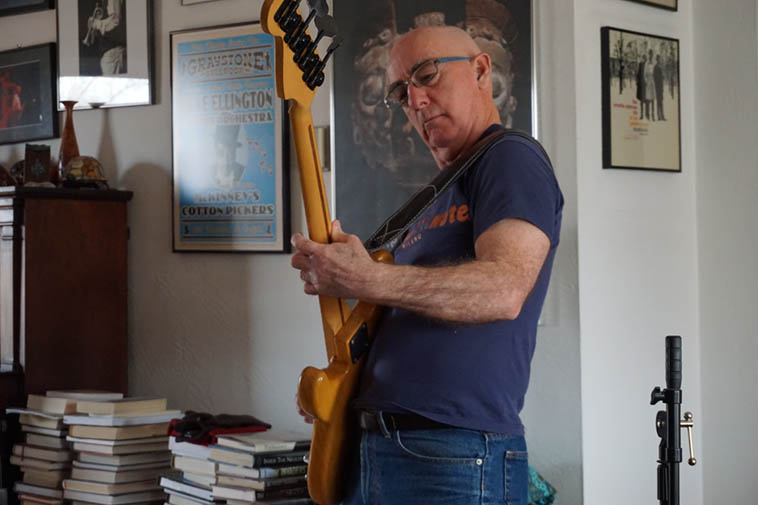 David Parlato recording session at Studio 725 – February 13, 2o19 — in duet with guitarist Michael Anthony of which said recording session has been sent over the airwaves of KUNM and will continue —- photo by “recording engineer” Mark Weber 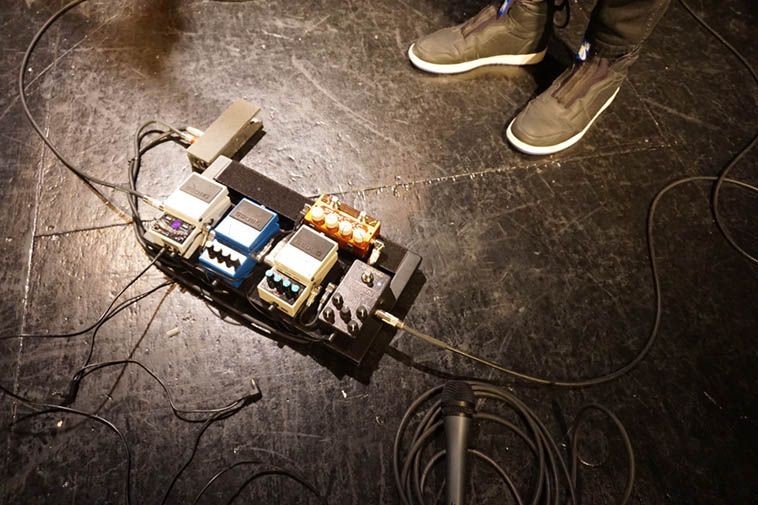 Nels Cline & his foot pedals (rather, his “pedal extremities” as Fats Waller would have it) – February 8, 2o19 Outpost Performance Space —- photo by Mark Weber 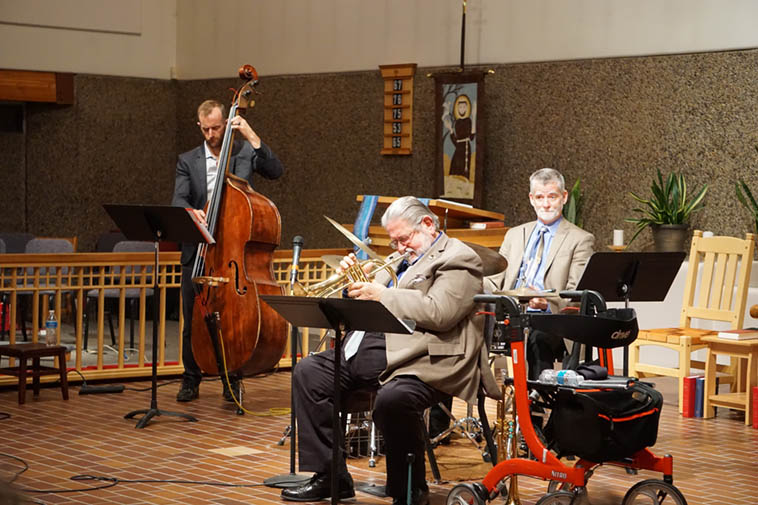 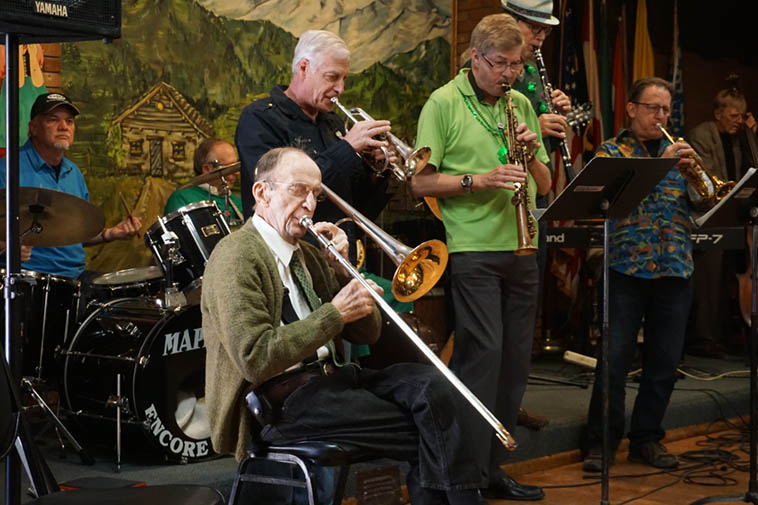 The venerable Doc Rock a mainstay on the Albuquerque Dixieland scene for years, here he is at the (3rd Sunday monthly) Rio Grande Jazz Society jam session —- March 17, 2o19 – photo by Mark Weber —- photo by Mark Weber —- Doc is a bone doctor (get it: “bone” = trombone) but in real life an actual orthopedic doctor —— The other twist is “ortho” is ancient Greek for straight, and his beautiful lines on that horn are anything but straight! —- And Doc’s sense of humor is always welcome on the Thursday jazz show, one time he was playing over the airwaves with his band Jazz A La Carte and announced the next tune, “We’ve decided to play Undecided” (add that to the 679 recorded versions listed at Tom Lord Jazz Discography, this song composed by Charlie Shavers, first shows up in 1938 on the John Kirby band) 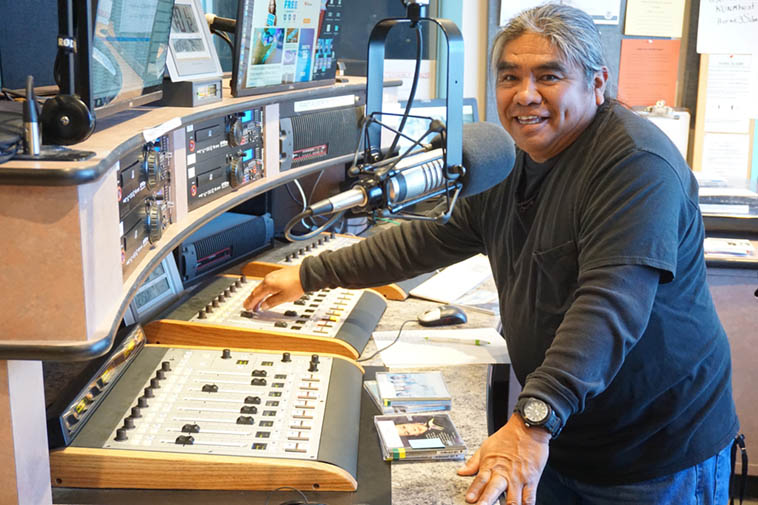 David Paytiamo drives in from Laguna Pueblo an hour west of Albuquerque to host Singing Wire on Sunday afternoons as part of the collective that alternates during those 4 hours of airtime —- photo by Mark Weber – January 27, 2o19 KUNM control room 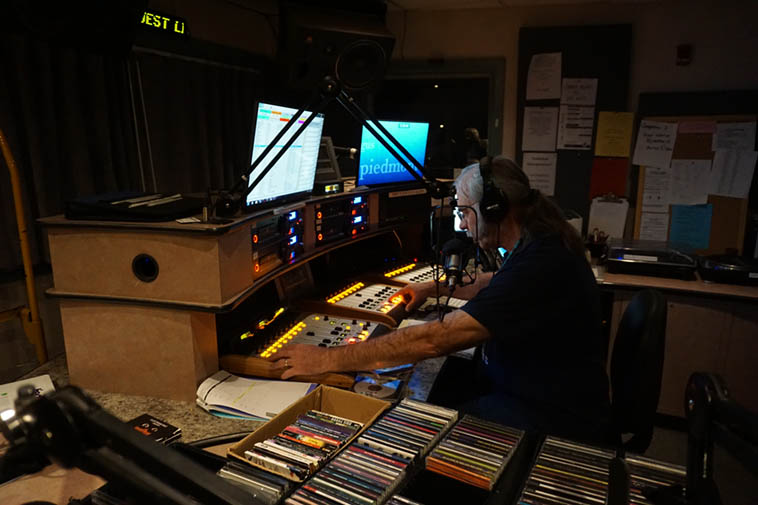 It doesn’t get anymore authentic than the Psychedelic Radio Head Shoppe late Saturday nights on KUNM when Scott MacNicholl digs deep into the Sixties and lives the dream & myth & reality of that era —— This broadcast week (March 23 – 29) we’ll be asking for your help in keeping KUNM healthy and real —- Please call with your monetary support > (505) – 277 – 4357 —- photo by Mark Weber – January 19, 2o19 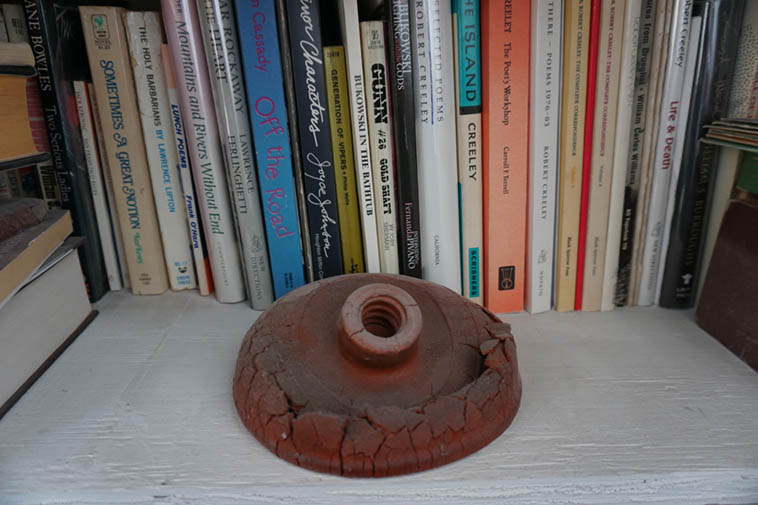 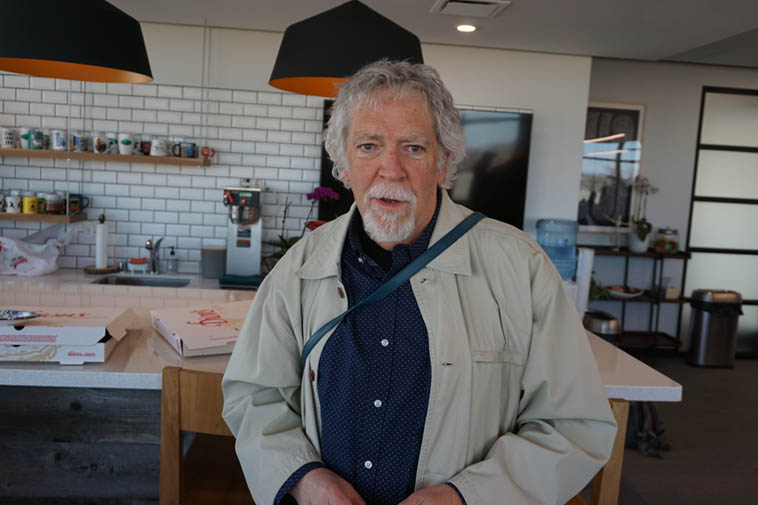 Me, myself and I shot byBonnie  Brandon Kennedy —- He grabbed my camera at a recent KUNM gathering and aimed —– March 16, 2o19 Albuquerque