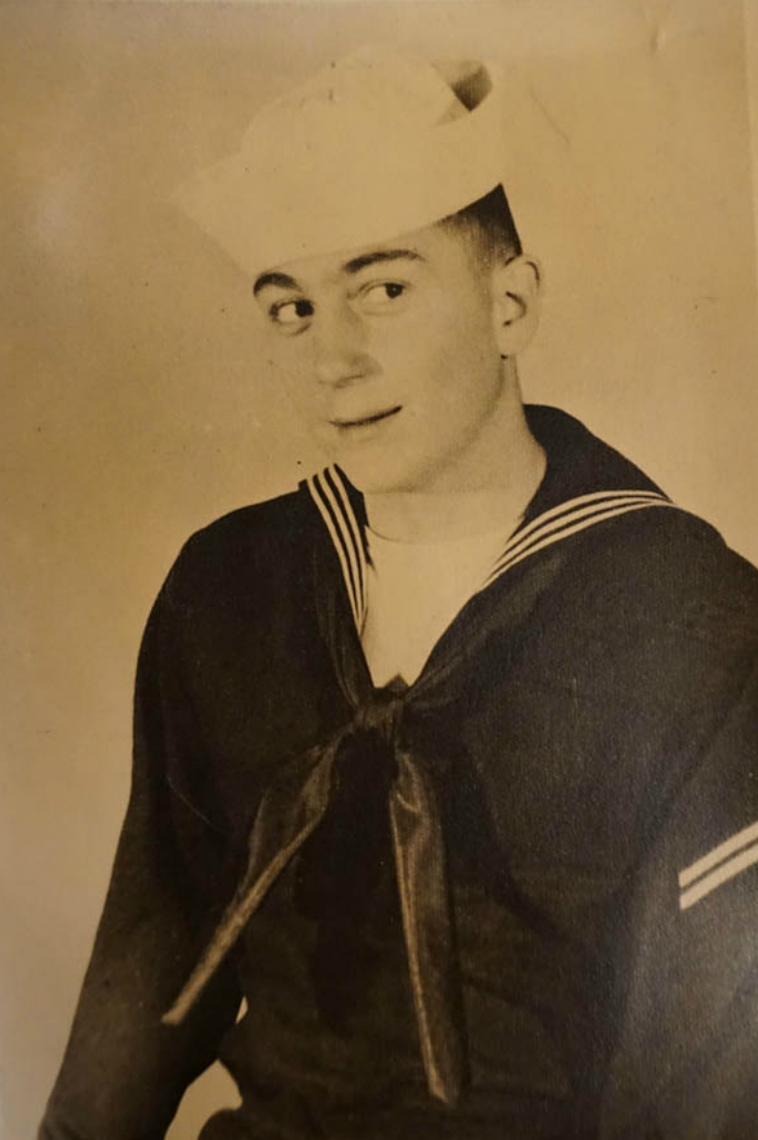 I could be wrong but the emphasis on originality is misplaced. The trick is: to be yourself.  And within that, you are of your community as well as an individual with something wholly your own to say. Charley Krachy is purely a jazz man, he’s a purveyor of improvisations in the tradition of long lyric lines that weave and interlace and crawl up the trellis like a vine into your head. He’s a Lestorian in that sense. He’s also Charley all the way.

Charley Krachy has spent his life between New York City and an hour north of the city in the Upper Hudson River Valley in the towns of VerPlanck, Peekskill, Cold Spring, Garrison, Beacon, Cortlandt, all on the east side of the Hudson River, the Bear Mountain Bridge, Appalachian Trail, near West Point Military Academy (on west side of Hudson across from Cold Spring) —- You can catch the Metro North Railway out of Grand Central Terminal (or pick it up at 125th as Virg does) and float up on the ride north out of the city. This is the Hudson Highlands. Ask Charley about the blue crabs. 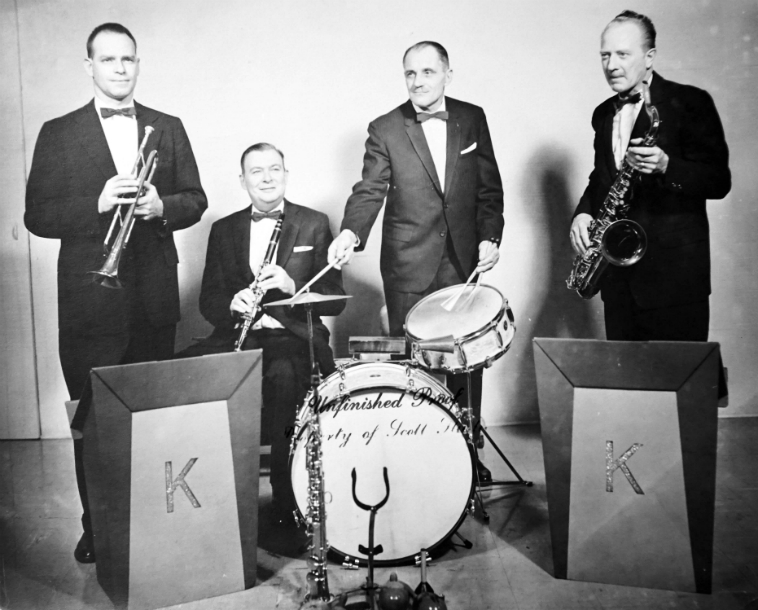 Note the K on the music stands —- Charley’s father was a drummer and a truck driver (and later a piano technician) : Charley Krajchy (b. NYC 1911 – 2001 age 90) —- He kept the traditional Czech J in his name, whereas, Uncle Walter (his brother) anglicized his name to Taylor —— Sons of Paul J Krajchy (1875-1954) and Sophia Matoska (1886-1975) immigrants of Czechoslovakia ——– Charley Sr married Rita Stinson in 1937 and had two kids: Charley and Sharon (who wrote the lyrics to “Jazzman’s Serenade” for her brother)(Rita d. 1998) —- Grandmother Sophie left a little village north of Prague at age 13 with another young girl and made their way to America —— In photo that’s Charley Senior’s long-time musical partner Freddy Beloin on sax 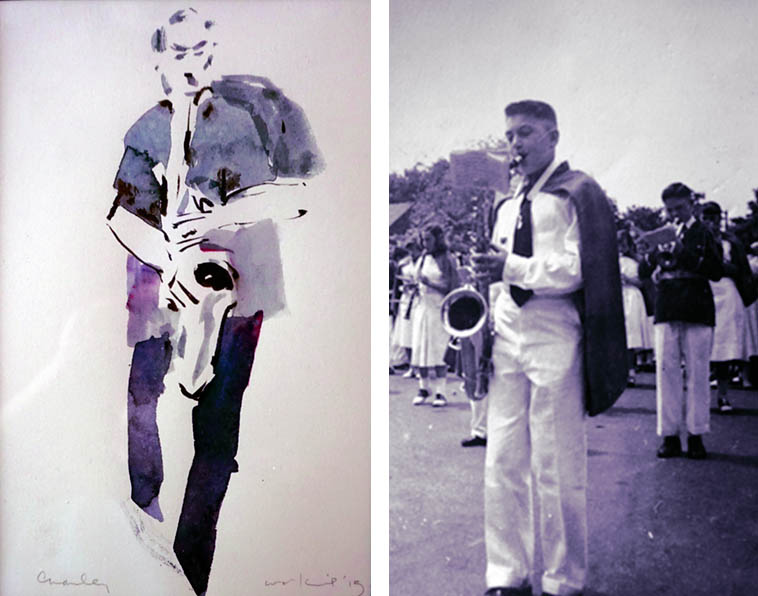 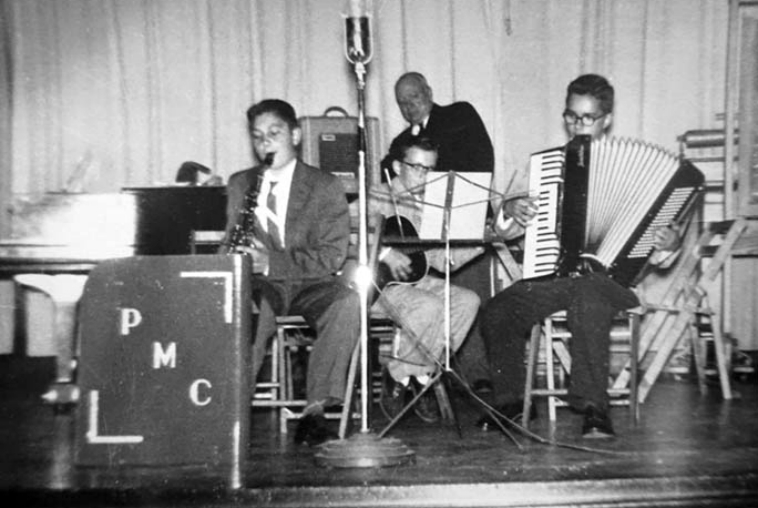 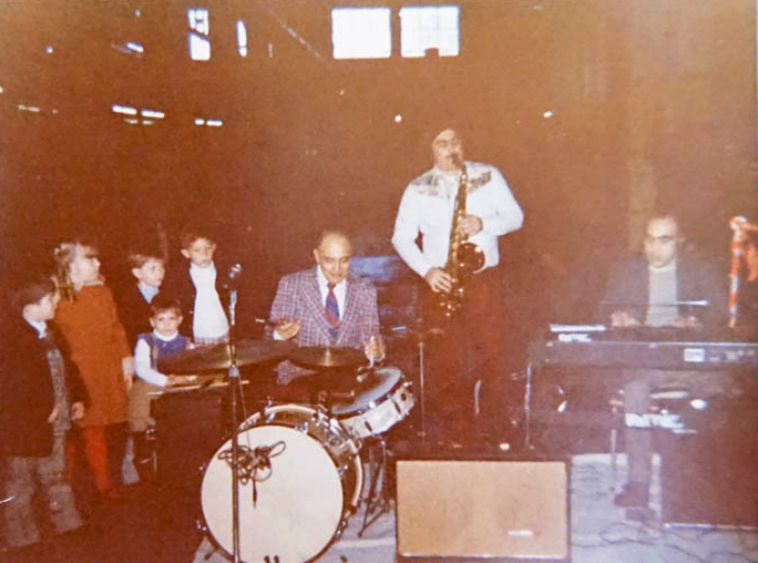 Charley playing with his dad – 1965 at The Diesel, Peekskill NY 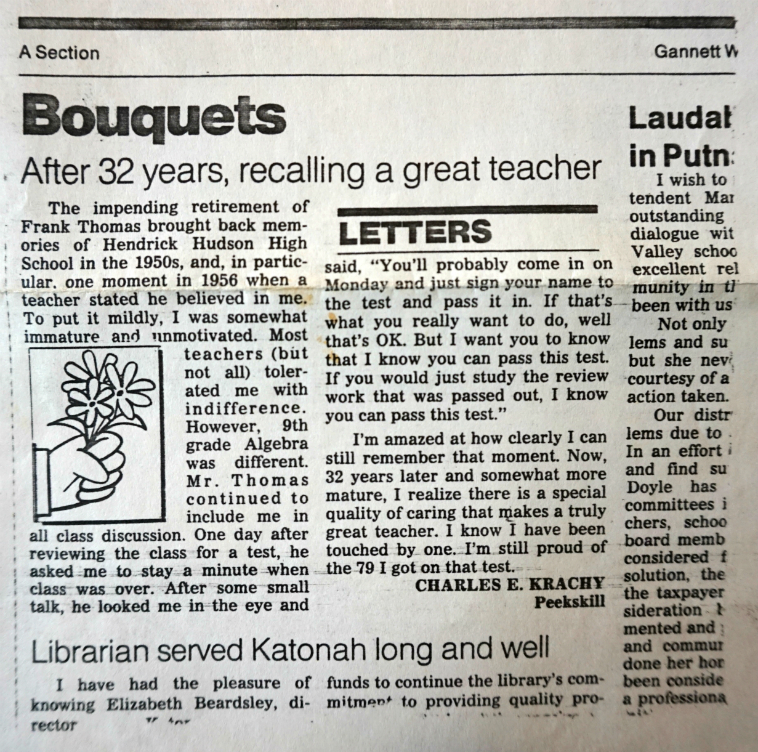 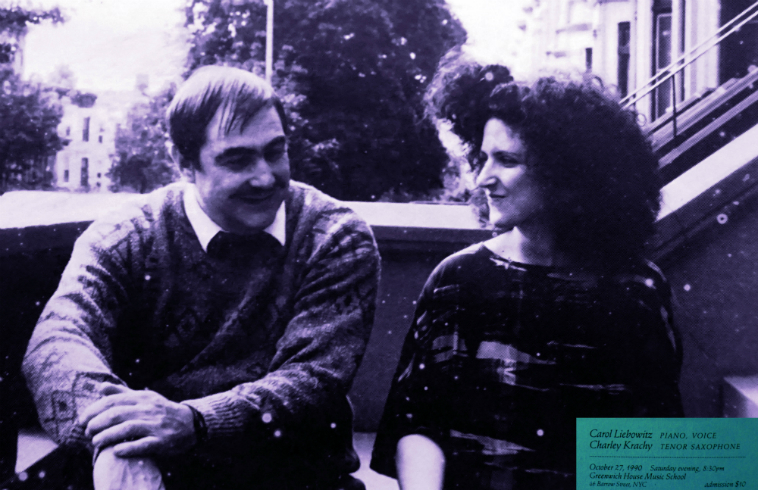 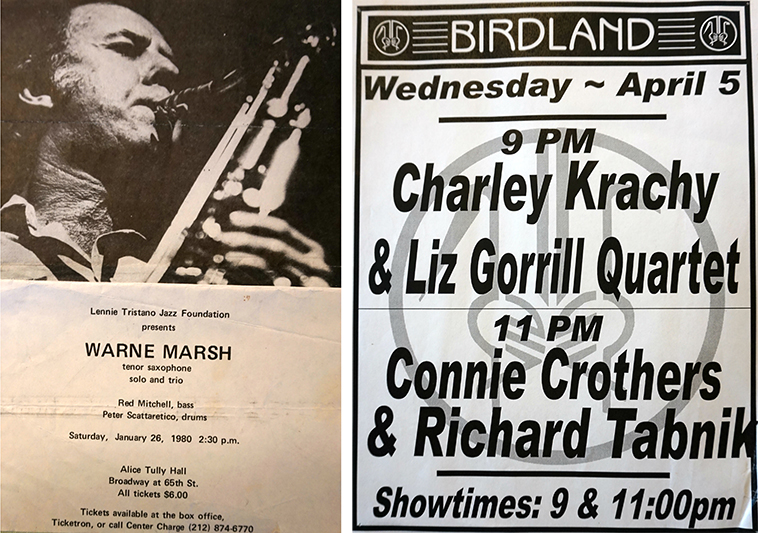 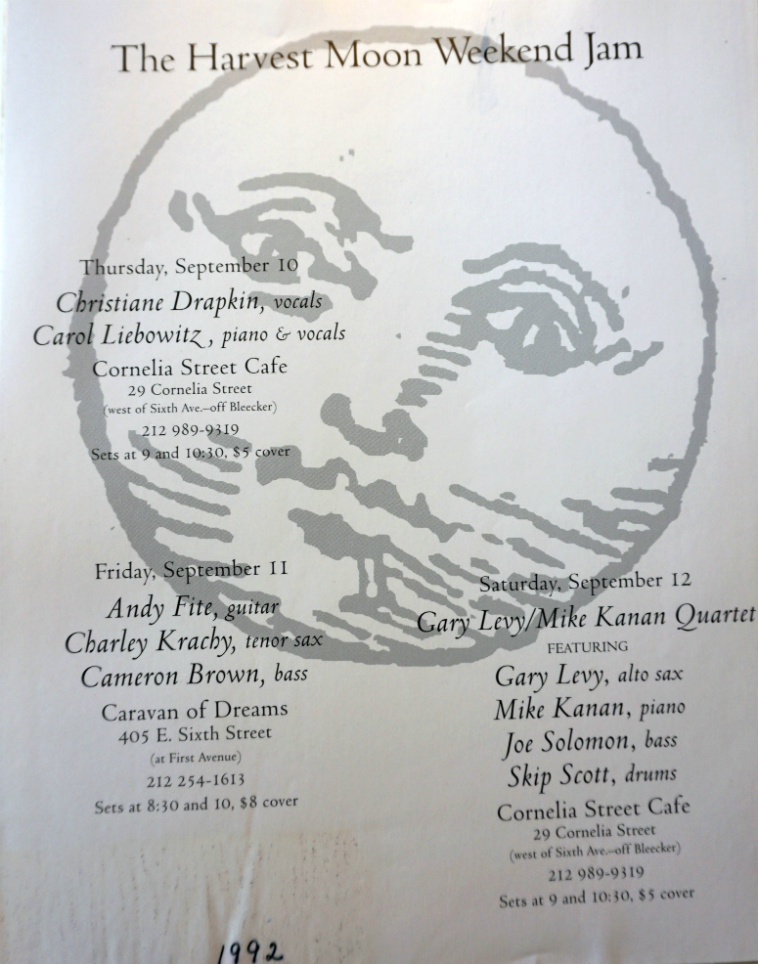 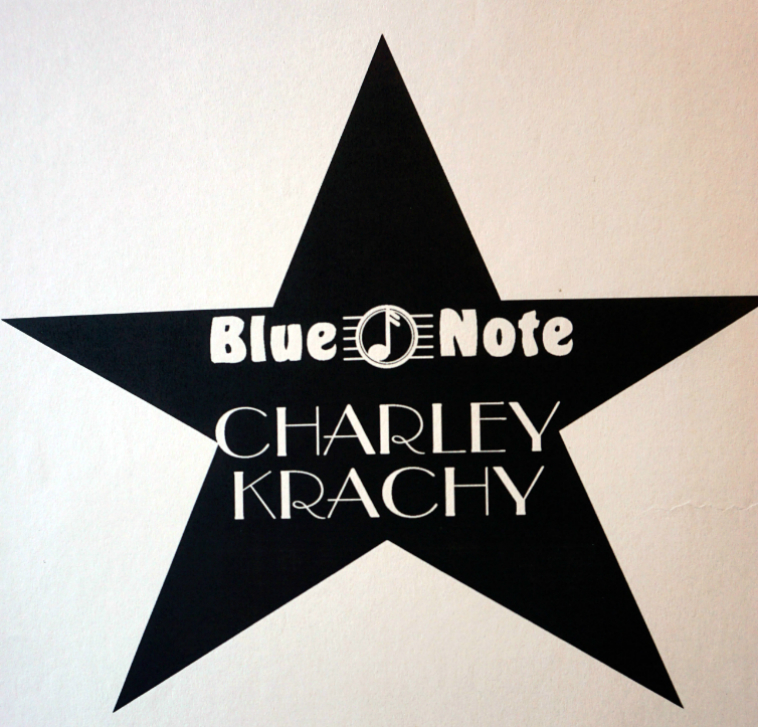 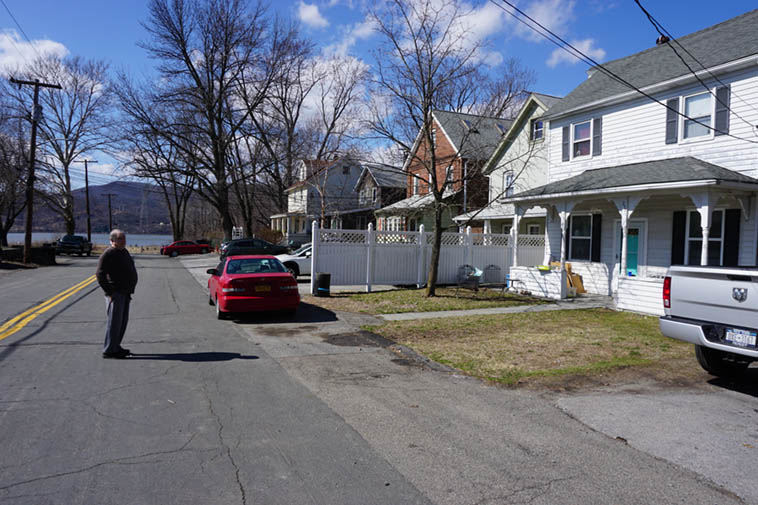 Charley in front of the house where he grew up —- West End of 9th Street, VerPlanck, New York, with the Hudson River —- April 6, 2o19 —- photo by Mark Weber ——- “Improvisation, this is what we live for . . . it’s a passion” –CK on Peekskill television program Living Arts, hosted by Jackie Suarez (you see watch it on YouTube) 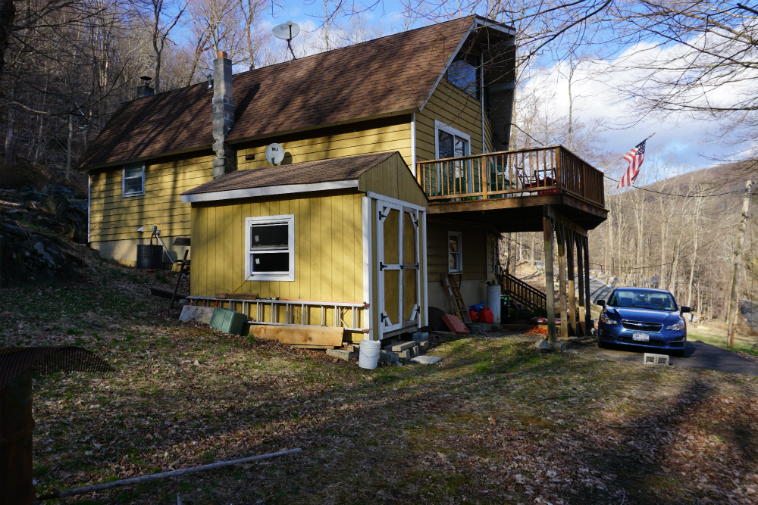 The house of a tenor saxophonist:  Charley & Peggy built this house in 1972 and have lived there ever since, raising 3 boys: Charlie Jr (Eddie), Desmond (Paul), Todd (Andrew) “They all go by their middle names!” –CK —- photo by Mark Weber – April 2o19 Garrison NY 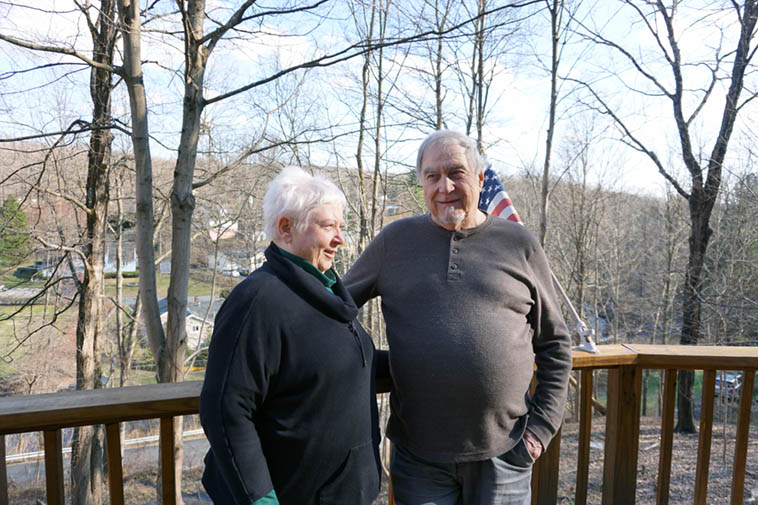 Peggy and Charley on their veranda among maples, chestnuts, beech, sycamore, oak (a lot of trees!) and below is Sprout Brook – April 6, 2o19 Garrison NY —- They were married in 1966 —- photo by Mark Weber 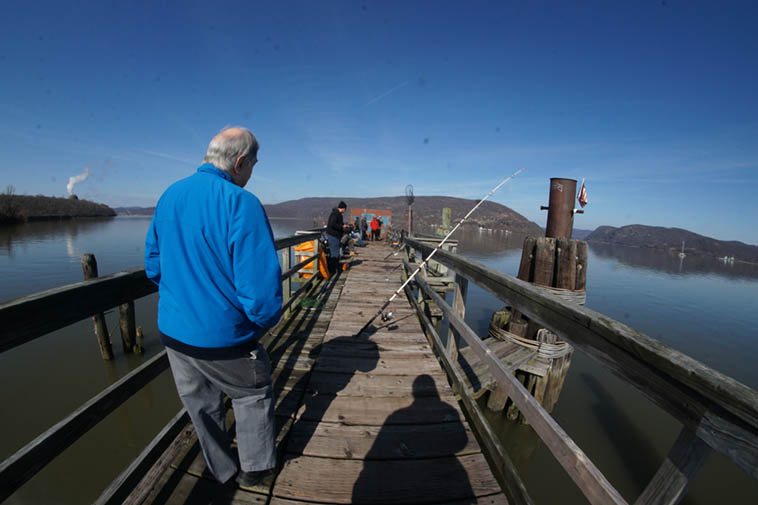 Charley checking what his fellow fishermen are bringing in —- “Stripers” (stripe bass season began April 1 —- and you can’t keep any that are under 19 inches —- the bass are on migration up from Chesapeake Bay) —- photo by Mark Weber — morning of April 6, 2o19 at Fleishman’s Pier —- that smokestack is Indian Point Atomic Power Plant on the Hudson River 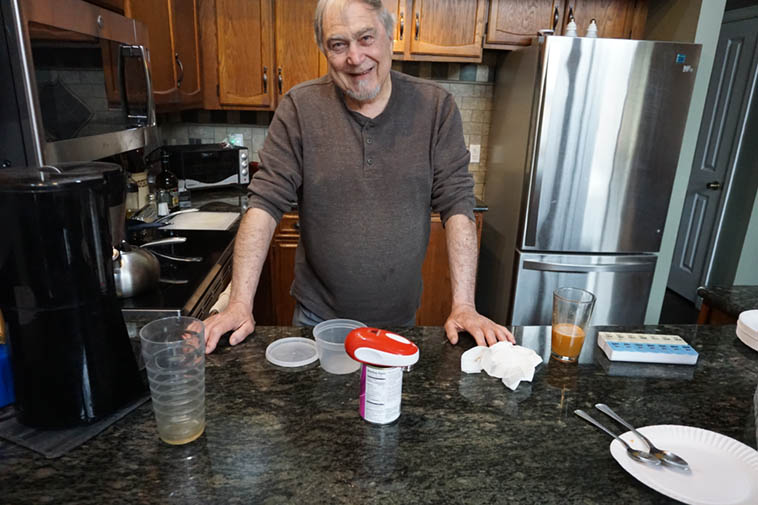 Charley showing off battery-powered gadget that opens tin cans —- That’s a smoothie he juiced for our post-breakfast top-off at his left ———– Charley is a connoisseur of salad dressing, transcendent, right up there with the excellence of his saxophone playing, here’s his recipe: 1/3 white balsamic vinegar ($53/gal.) mixed 2/3 with Colavita Extra Virgin Olive Oil Premium Selection and you add your own salt & pepper accordingly —- photo by Mark Weber —- April 9, 2o19 home in Garrison 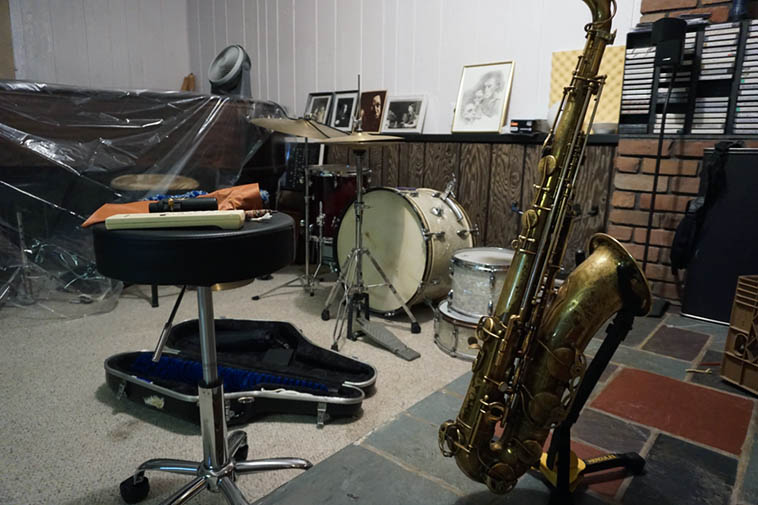 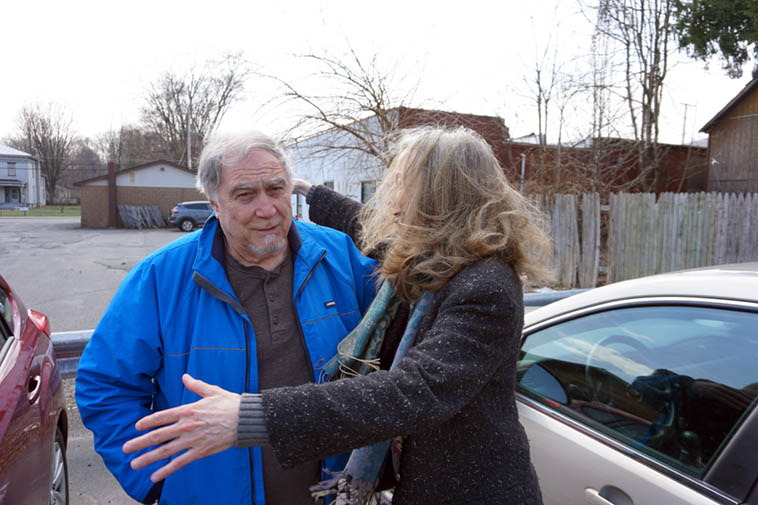 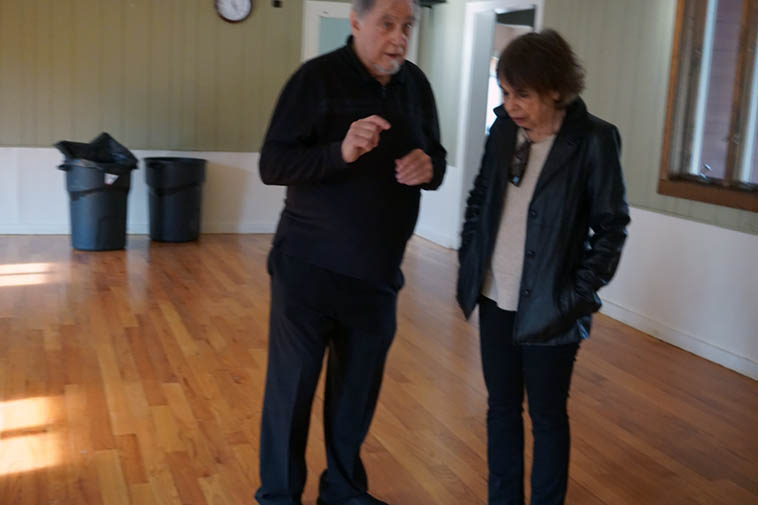 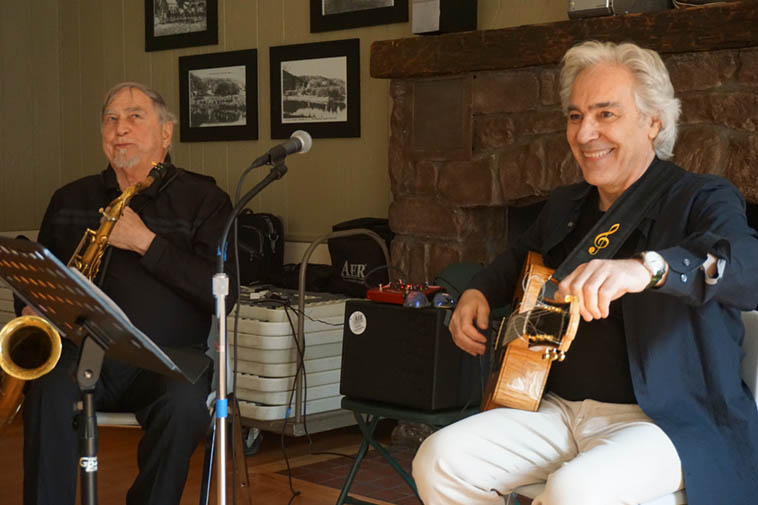 It’s about time the birds
Started flying in the other direction:
Get up to the arctic tundra to raise their babies
Time to lay flowers on the graves
Of our ancestors: Blues of Sophie Matoska
Who at age 13 left her little village north of Prague
And came to America
And now her grandson is playing tenor saxophone
In a little village in the Appalachian Mountains
On a sunny Sunday afternoon
With a guitarist who’s grandparents came from Minsk, Belarus
All those years ago . . . . 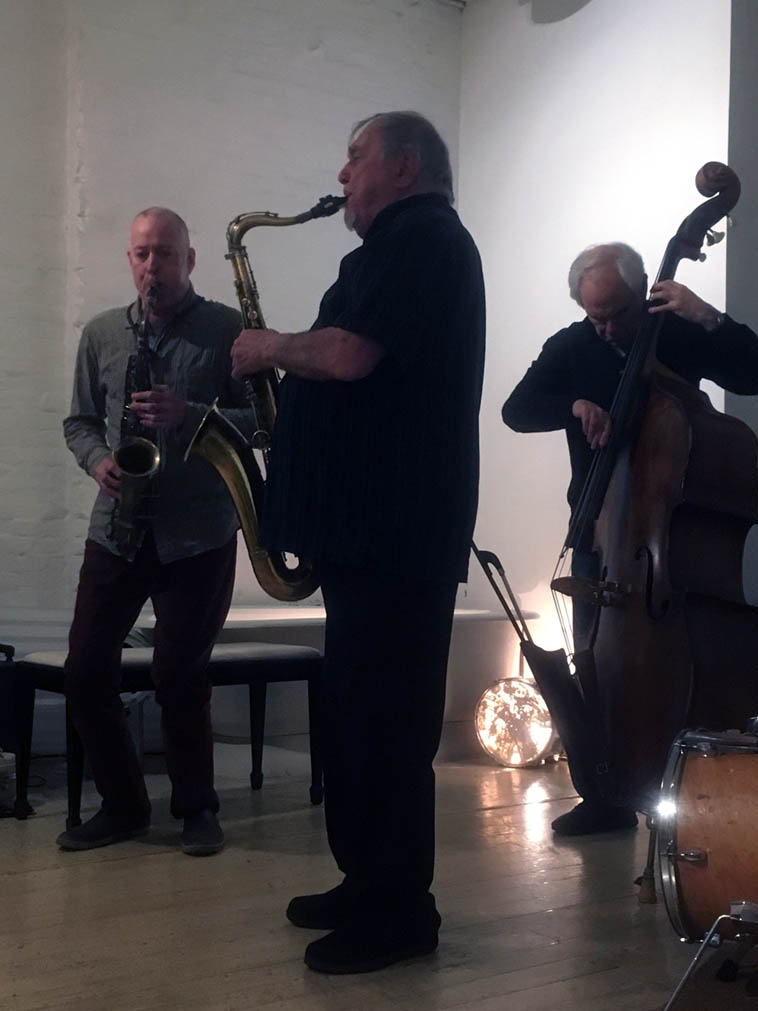