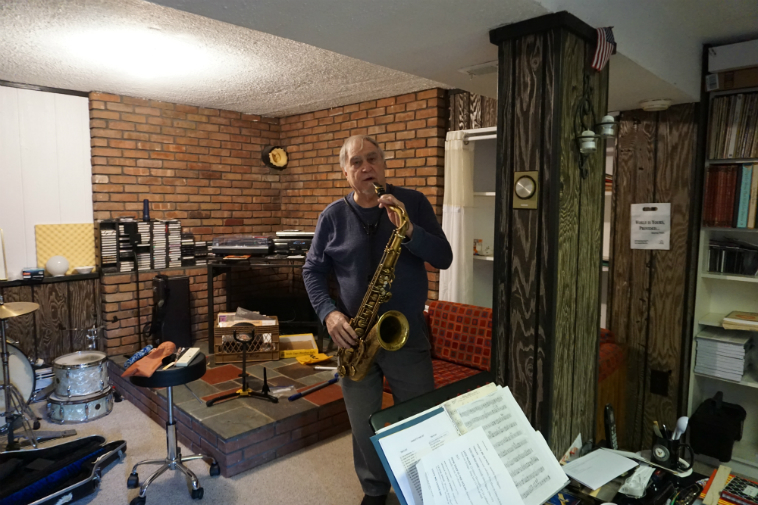 October 7 —- born at Peekskill Hospital —- living in VerPlanck. Went to VerPlanck Elementary School aka The Little Red Schoolhouse, just down the street on West End of 9th Street where he grew up (curiously, the houses didn’t have house numbers back then)(and Charley’s future wife lived on the corner, although, they didn’t start dating until he got back from the Navy) —— Three months of rheumatic fever, age 9, “about that time I wanted a saxophone, my Mom said if Dr Kinsey says you can blow, then grandma will buy you a saxophone, they took me to Dr Kinsey and he said I could blow” —- So, Charley’s mother Grandma Stinson came through (rheumatic fever effects the heart)

These were years of playing weddings & parties in cover bands, “I could make $500 on weekends,” until Lenny Popkin suggested he discontinue with the cover bands so he could concentrate purely on the jazz feeling

Hears Lenny Popkin in concert September 9, 1979 and goes backstage afterwards to ask if he could study saxophone with him, which began a 2-year (maybe 2 ½-year) weekly regime, simultaneously enrolled at Westchester Conservatory “Theory 1 and Theory 2 with a great teacher, classical flute player”.

*I asked Kazzrie when she first met Charley: “Fun!!! — let me think about it — early 80’s, or late 70’s? when he was studying with Lenny Popkin? i’ll have to reminisce with him, and refresh my memory!

I bet Gary Levy will have some good Charley stories!

I’m pretty sure Charley and I started playing duo sessions up in my attic, unless it was before then. I had a great 2-story apartment in a house on 188th Street in Jamaica, Queens. I had to have a new window put in on the 3rd floor so they could lift my piano up through it. The window faced west, so every night I’d sit up there with my dinner and watch the sky paintings at sunset! It wasn’t insulated, so I hung bedsheets on ropes around the piano, and in the winter the sheets would move with the wind. I had a kerosene heater up there, and slept in my ski jacket, hat and gloves so I could wake up at 4:30 every morning and play before going to work. I think that’s where Charley and I began having sessions. I loved his gorgeous tenor sound, and we had an instant affinity. We started playing weekly sessions, and the music kept opening and evolving. We were mostly playing tunes, which is how I got to experience Charley playing a melody with a kind of dimensional beauty that defied explanation. To this day, he’s the Magician of Melody. Charley, right from the start, connected to the melodies he played from his heart, and I can’t tell you how many times I’ve seen him melt down an audience with just a melody. I’ve also seen people swoon from hearing one note out of his horn. Really. There’s a direct energy transmission in his playing that can only be called love. And isn’t that the essence of jazz? The sound of one note loving?

Charley joins New Artists collective [this date is most probable] —- Connie Crothers and Max Roach formed New Artists collective in 1982 and continues now under direction of Virg Dzurinko —- New Artists present concerts and release records, as of now (2o19) there are 66 records in the catalog —- see New Artists Records website —- Charley says he remembers Connie was living at Chelsea Hotel when she asked him to join, and we know she lived there and kept a studio 4 or 5 or 6 years, certainly in March 1987 as that’s when she recorded DUO DIMENSION (NA 1003) in her studio there (see photos by Chuck Stewart) and so, tentatively, we date CC’s years at Chelsea as 1987 – 1992 —- Charley remembers the first New Artist meetings he attended were at Connie’s East 9th Street studio.

7pm March 1 —- The Charley Krachy – Gary Levy Quintet w/ Virg Dzurinko on a double-bill with Dori Levine & Ed Littman Duo (voice & guitar) at Faust Harrison Pianos, 205 west 58th Street NYC (just west of 7th Ave) — “Here’s what I know for sure . . . Faust Harrison was March 1st . . . . my first grandson was born Feb 28 . . . I was at the hospital all night and the next day when we played I remember being tired and I made an announcement: I became a grandfather last night, don’t know what’s gonna come out of the horn . . . Gary had just returned from Curacao two days before” [email CK > MW 23apri2019]

September 17 —- CK attends the Memorial Service for Sonny Dallas at Saint Peters (the Jazz Church), 619 Lexington Ave, NYC —- Those that performed (judging from photographs): Connie (piano), Lee Konitz (alto), Ted Brown (tenor), a bass player, and a trombone player that looks about Sonny’s age with a moustache — Also, Nick Lyons, Will Jhun, and Richard Tabnik were in attendance.

November 24 —– Recording session at Big Twig Studio, Roscoe NY – engineered by Dana Duke —- Charley & Kazzrie all kinds of duets – This should be a record someday (presently unreleased) I’ve heard it and it’s a knockout

October —- Kazzrie Jaxen Quartet is formed: Kazzrie (piano), Don Messina (bass), Charley (tenor), Bill Chattin (drums) — This extraordinary quartet stayed together till August 28, 2016 and thereafter as a dummer-less trio till April 22, 2o18———–Don says: “I wouldn’t say the band is over more like inactive, on a break” (email 15apr2o19)

September 26 —-September 26 — 3-4:30pm —- KJ Quartet play Wellfleet Public Library, Wellfleet, Massachusetts —- “Connie surprised us and walked in with a friend and sat next to Peggy. Peggy remarked after the gig on how Connie was so proud of me, so happy for me . . . she had that beaming smile and just was so genuinely proud of me & my playing. It was so real Peggy remembers it clearly, we were just talking about it last night.” [email May 3, 2o19 CK > MW]

August 13 —- Connie Crothers dies at Bellevue Hospital, (a mere 5 blocks from 317 E 32nd Street) lung cancer that had migrated from an earlier bout with colon cancer—- Charley told me how Virg called him that night from the hospital – he was in town – that he should come to see Connie as the end was near – He got there at 9, went into Connie’s room and Anna (Lenny & Carol’s daughter) was holding Connie’s hand and so they held hands together – Charley stayed till around 1 o’clock and then drove home – Virg called in the morning to tell him Connie was gone.

October 16 —- session for cd CONVERSATIONS (NA 1064) in duet with guitarist Woody Mann —— Charley dedicates the cd to Connie “my friend, my teacher”

Summer/Fall —- Don Messina and Charley get together with flute player Fran Canisius in Ft Lee, New Jersey, where she lives, for informal sessions (2 or 3 times is Don’s best guess —- actual date to be determined)

House concert at Studio B (Charley’s home basement studio) with Virg Dzurinko (piano), Nick Lyons (alto), Charley (tenor), and Don Messina (bass) —– “I love playing with Nick, seems like my playing opens up in some way I can’t explain. He’s a sweet cat & very smart & with it!” [email from CK > MW 12sept2017] —- previous to this concert was a session September 12 with same players —– This is the first house concert at this location, 25 attendees, CK borrowed chairs from Ford Piano

April 7 —- Sunday afternoon @ 3 o’clock concert @ Continental Village Clubhouse, 49 Highland Drive, Garrison NY in duet with Woody Mann plus one little poem from Mark Weber —– They played one set: 1) You’d Be So Nice to Come Home To 2) Tbilisi 3) It’s You or No One 4) Jazzman’s Serenade 5) 317 E 32nd Street 6) How Deep is the Ocean (dedicated to Connie) 7) Hesitation Blues 8) What is this Thing 9) Clos Enuf 10) Blues for Sophie Matoska (poem) 11) Love Me or Leave Me ———- Zoom recording exists

Charley’s website Old Dog New Saxophones went active, created with the help of (vocalist) Cheryl Richards who also drew & designed the shaggy dog logo —- CK is marketing saxophones, all types, the focus being the titanium models from GT Sax out of Taiwan, but also many others of more traditional metals —– The enterprise was formally launched in September —- See the website by clicking here…

—- Charley Krachy Quartet at Jefferson Valley Mall foodcourt sponsored by Ford Piano (who has a store there on the lower level)——— [telcon w/CK 5/28/2020] “I think this was Gary Levy, Sam Kulok on guitar and a drummer”

at Division Street Grill, Peekskill the quartet of Charley (tenor), Gary Levy (alto), Father Stan Fortuna (6-string elec-bass), Stan Gulok (guitar) —-Tunes: “I Remember You,” “Smog Eyes,” “Everything Happens to Me,” among others —- a recording exists