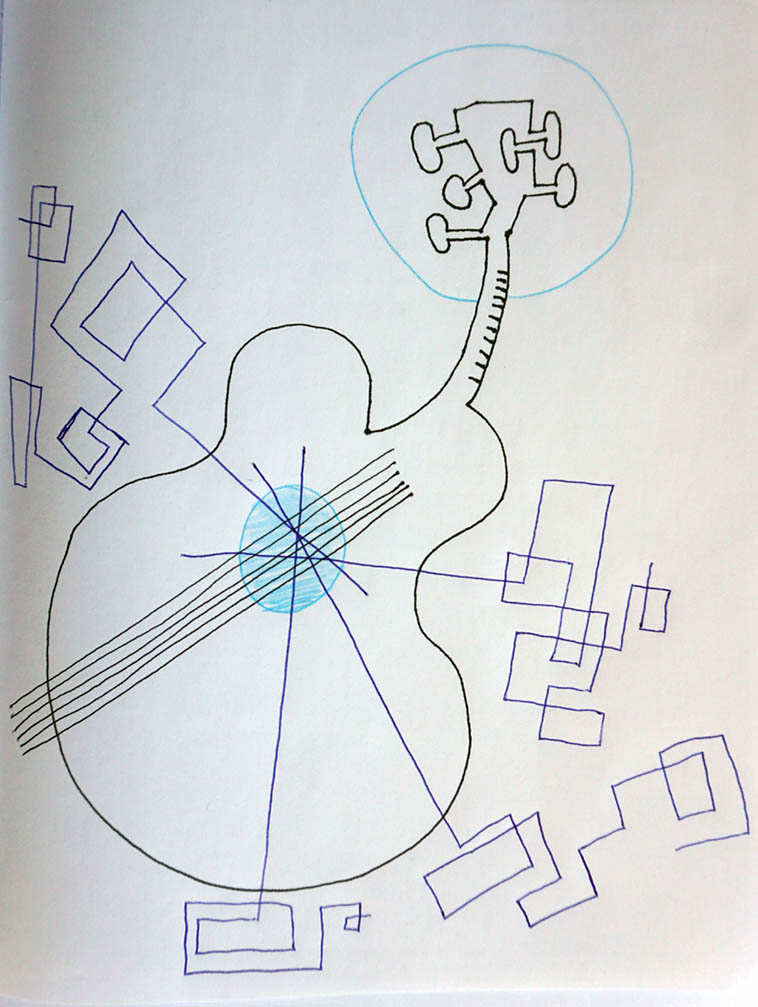 I call this: Listening to Johnny Smith Quintet play Cherokee on the Radio —- line drawing by MW listening to KUNM Friday jazz with Glenn Kostur

YOU CAN HEAR THE LISTENER LISTENING

Maybe the early flush of discovery
and newness is a thing of the past, be it
the dominion of the young, you
are never-the-less settled into quiet repose
Sitting by the window
This is not the complacency of those that
chew the cud
This is quiet pleasure, what we call
Enjoyment
Simple and easy 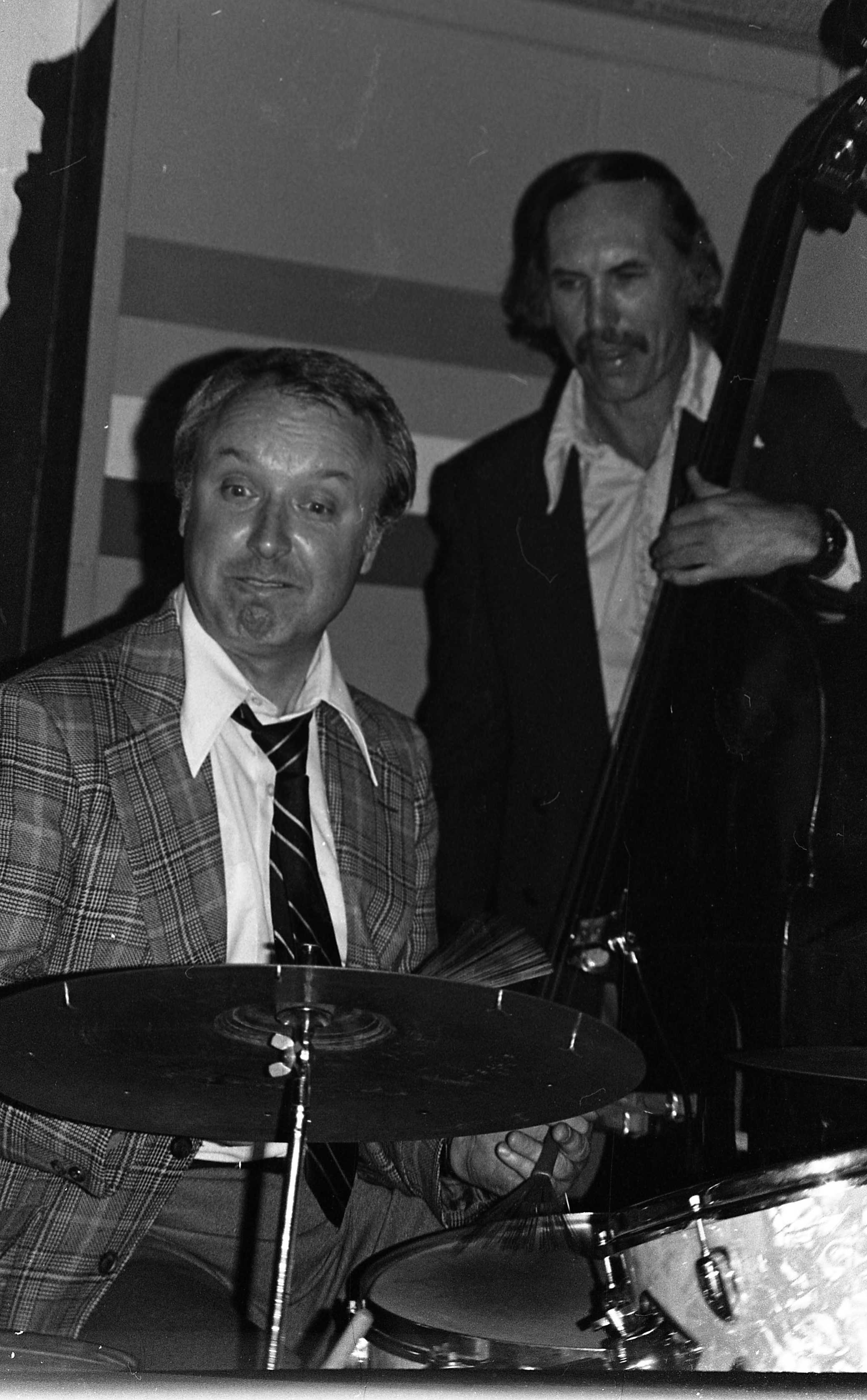 Jake Hanna and Monty Budwig in trio with TEDDY WILSON at Donte’s – March 16, 1977 —- photo by Mark Weber —- I just read the Jake Hanna book of remembrances by Maria S Judge, very much enjoyed it, Jake was a regular at the bar in Donte’s and I have a shot around here somewhere I took of him bending his elbow there (we all bent our elbows there) 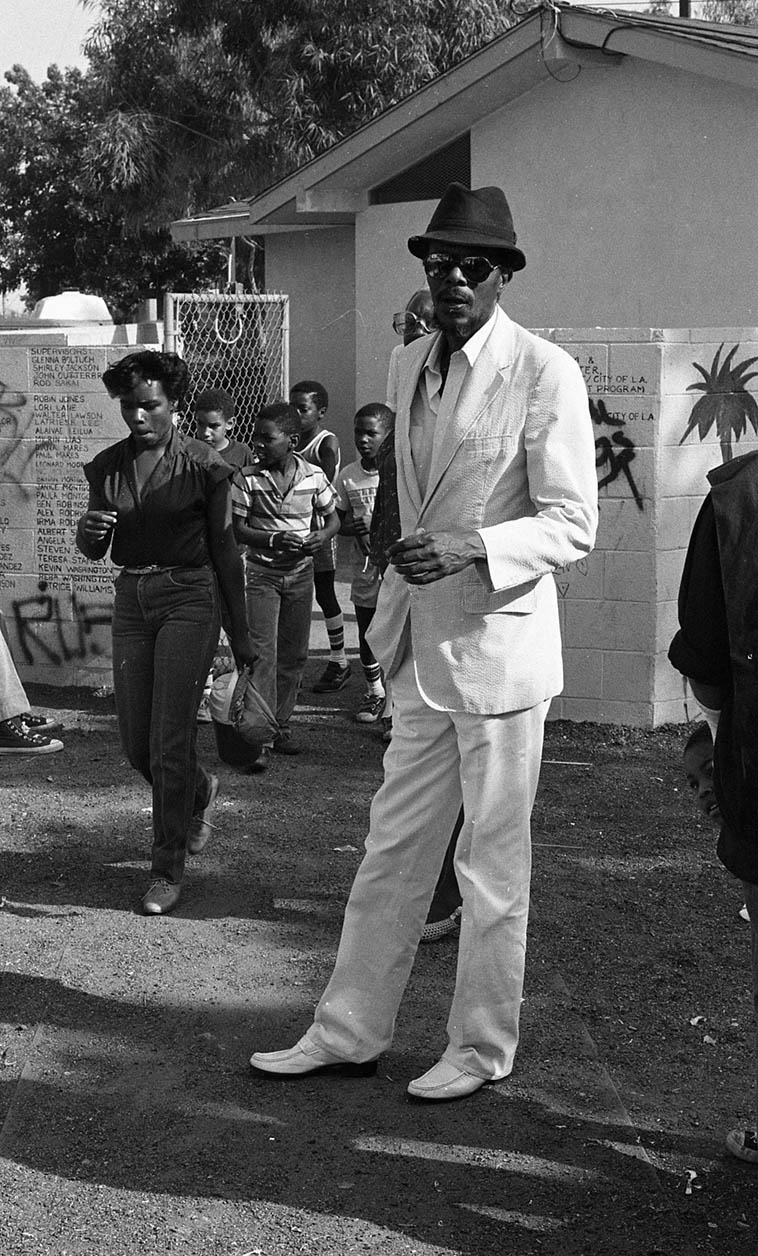 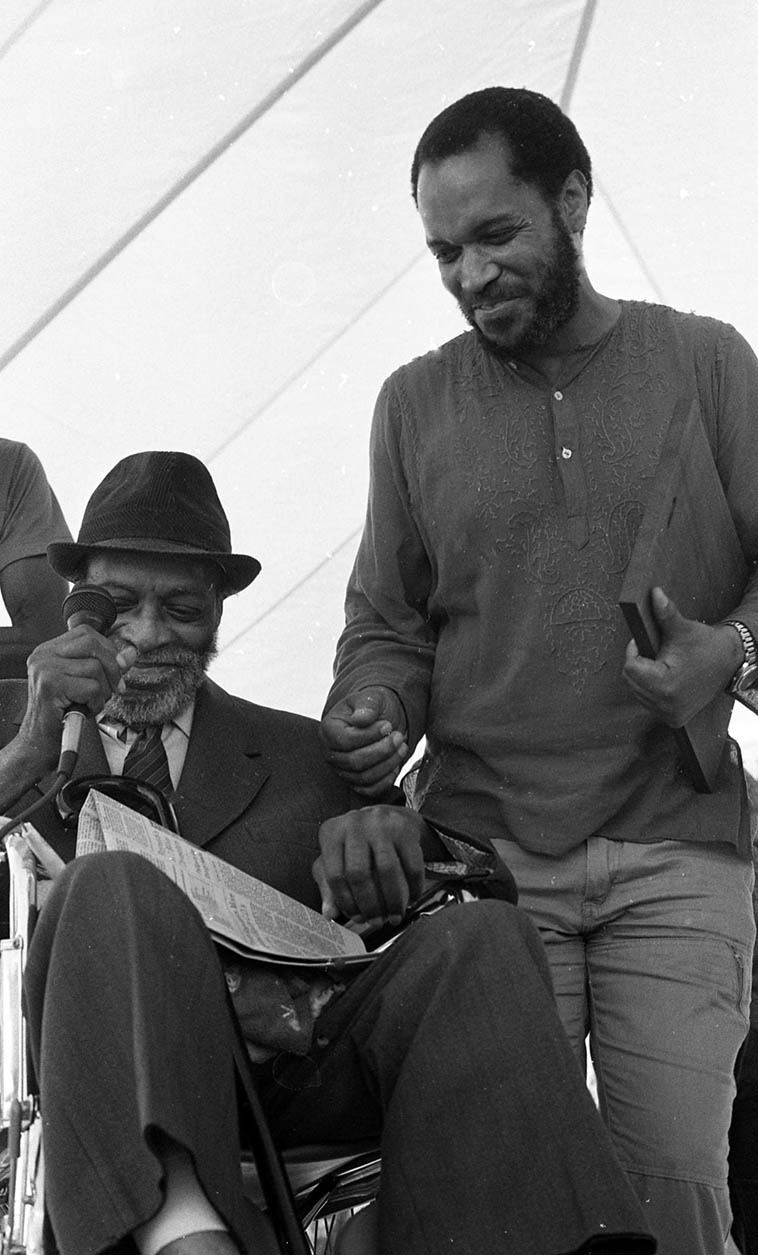 There’s a lot of history and accomplishment in that photo: Papa Jo Jones receiving an award from Billy Higgins for his achievements in jazz at the 3rd annual Watts Towers Day of the Drum —- September 23, 1984 – photo by Mark Weber 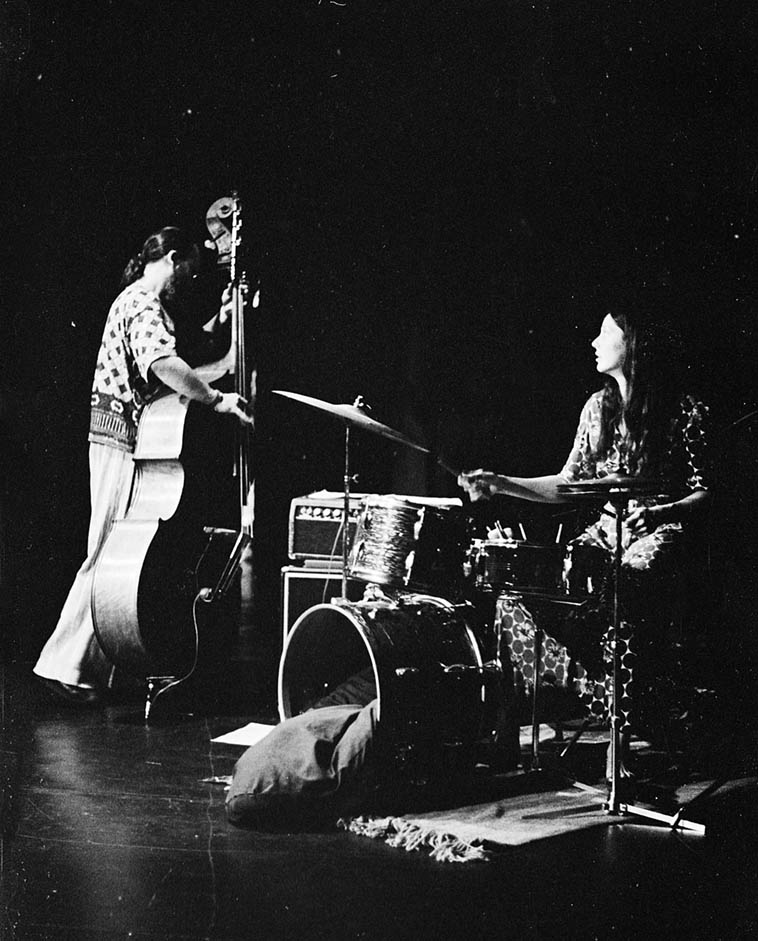 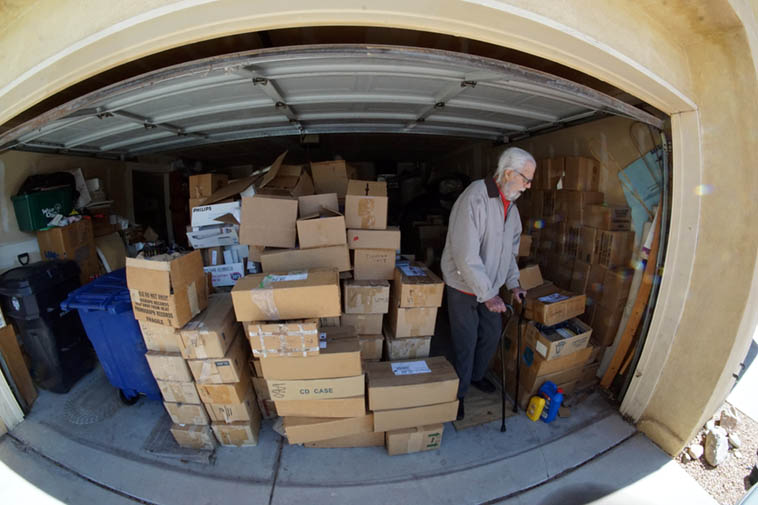 Tom Albach and his great achievement, that of documenting Horace Tapscott and the Pan Afrikan People’s Arkestra in the 1980s —- That’s the Nimbus West warehouse stock of LPs and CDs in his garage here in Albuquerque —- March 4, 2o19 photo by Mark Weber with an 8mm lens, digital. 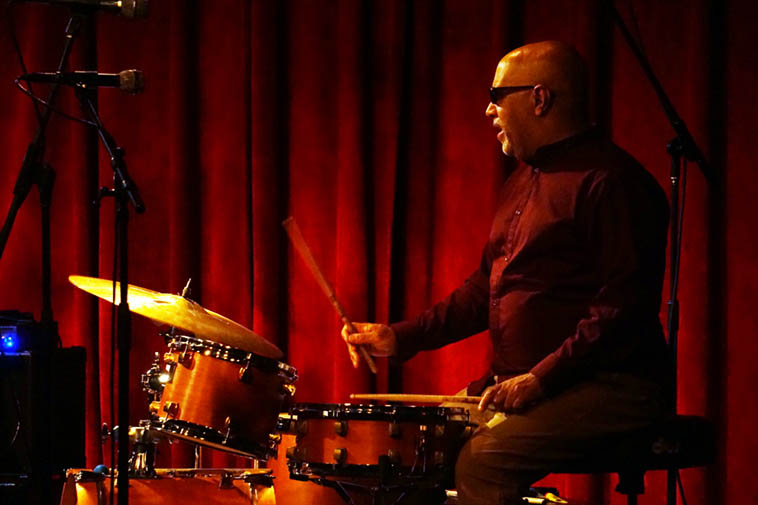 Leon Parker visiting New Mexico as part of Aaron Goldberg Trio —- I wonder if not using a hi-hat is a regular thing with him?  He certainly makes do without —- photo by Mark Weber —-  May 2, 2o19 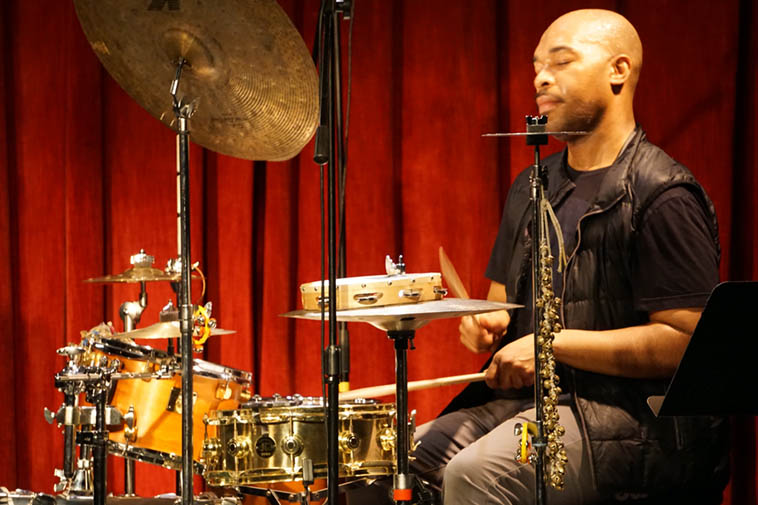 Eric Harland w/ Chris Potter’s Circuits Trio —- March 14, 2o19 —- photo by Mark Weber —- This was a plugged-in outfit with a lot of electronics flying around —- For my money, I found I liked listening to Mr Harland centrally and let everything else work as embellishment to what he was magnificently doing 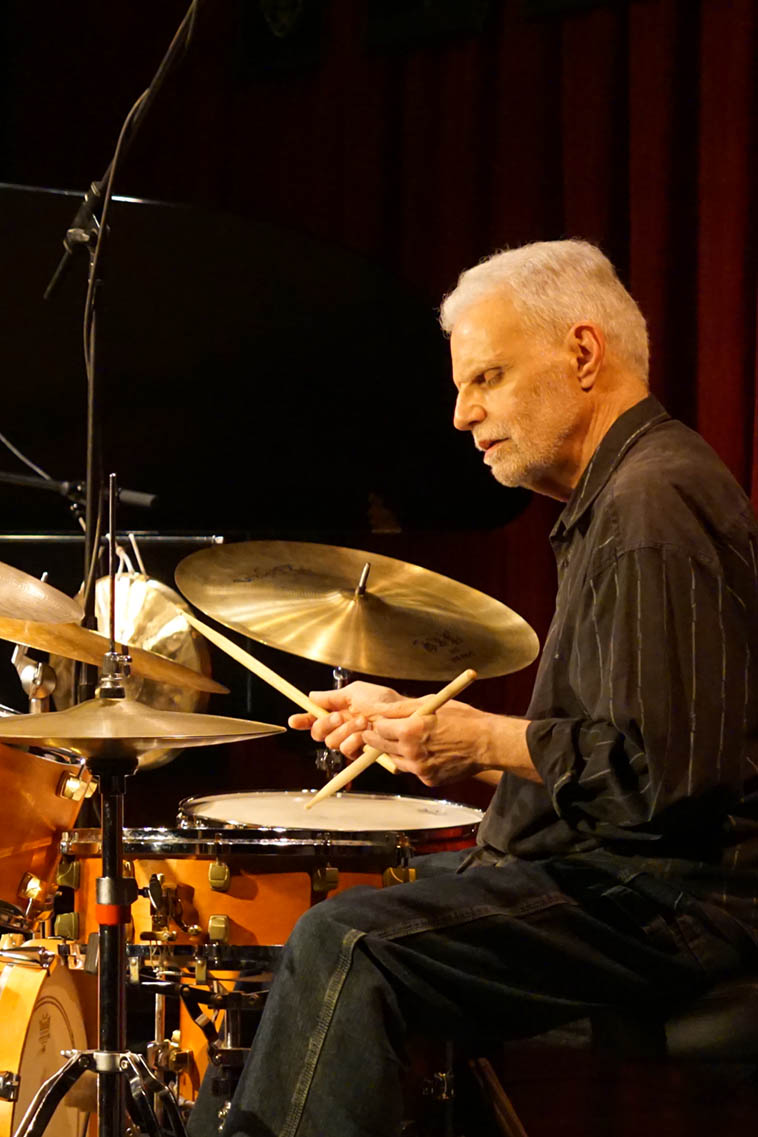 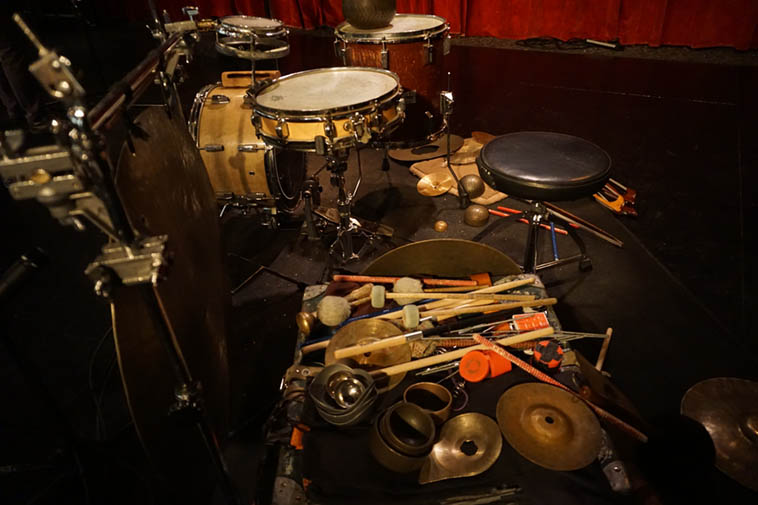 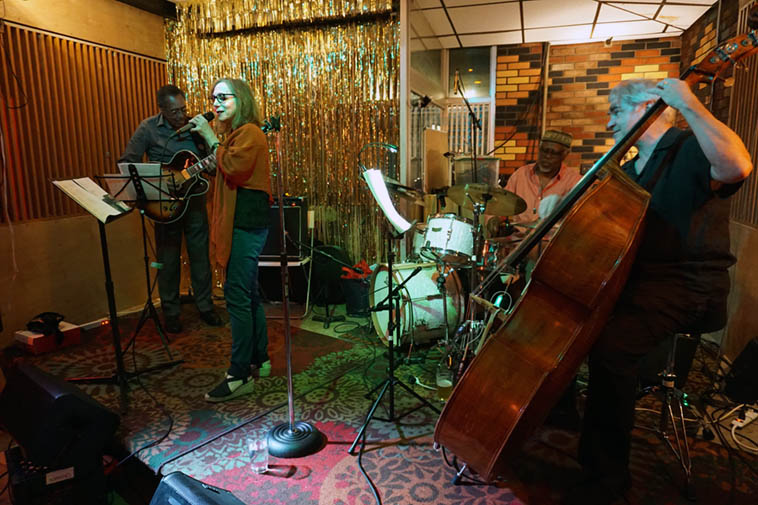 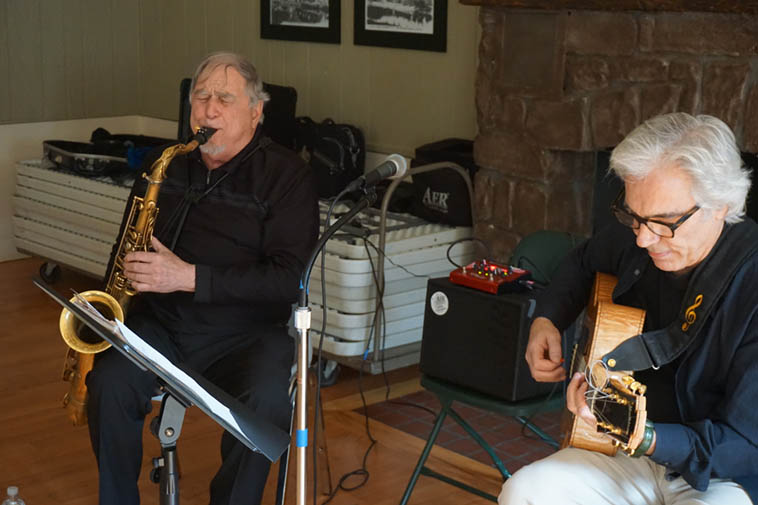 Charley Krachy & Woody Mann in duet in the zone in the Hudson River Valley in New York in deep —- April 7, 2o19 photo by Mark Weber 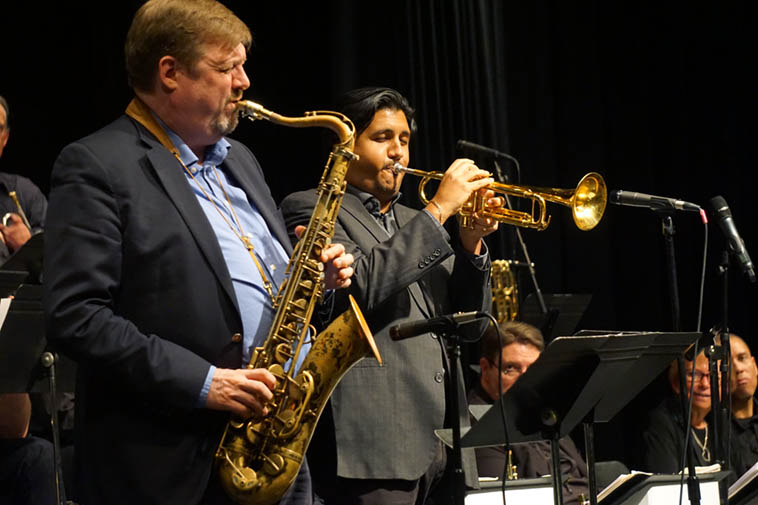 These two are the real deal: Joel Frahm(tenor) and Michael Rodriguez(trumpet) guesting in front of Albuquerque Jazz Orchestra (that’s music director Glenn Kostur eyeballing them from the sax section) —- February 16, 2o19 —- photo by Mark Weber —- Was Bird the first to incorporate quotes from pop songs into his solos? Mr Frahm was a geyser of quotes this evening, from all over the map, the entire kitchen sink went into the mix, even classical referents —- Hear Bird quoting “Buttons & Bows” in his “Scrapple from the Apple” solo May 1949 Paris, that song was on the radio back home in the USA —- Sonny Rollins quotes extensively, so does Dexter, and Bobby Bradford, and this guy Joel Frahm, it’s a virtuostic thing —- Mr Rodriguez is just purely great — These two are happening 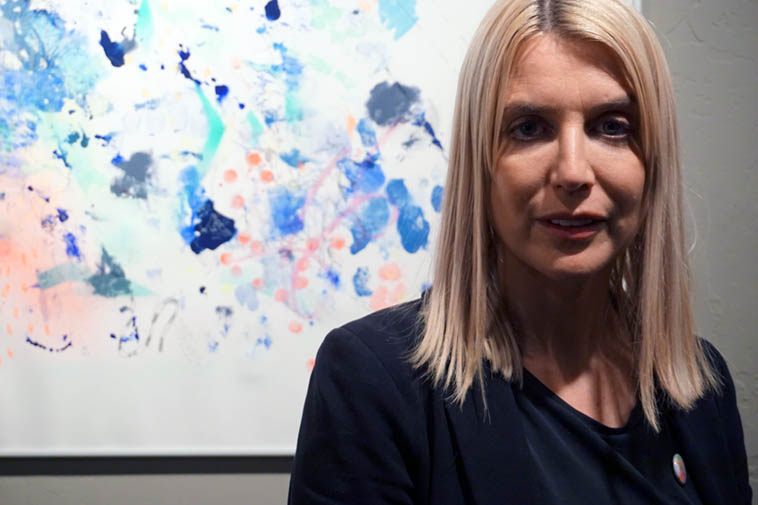 Isadora Stowe at her Adjacent Possible show of recent paintings —- March 15, 2o19 @ Inpost Artspace, Albuquerque (aka Outpost) — photo by Mark Weber —- These are the kind of paintings you want to sit in front of, somewhat close, and let them seep in 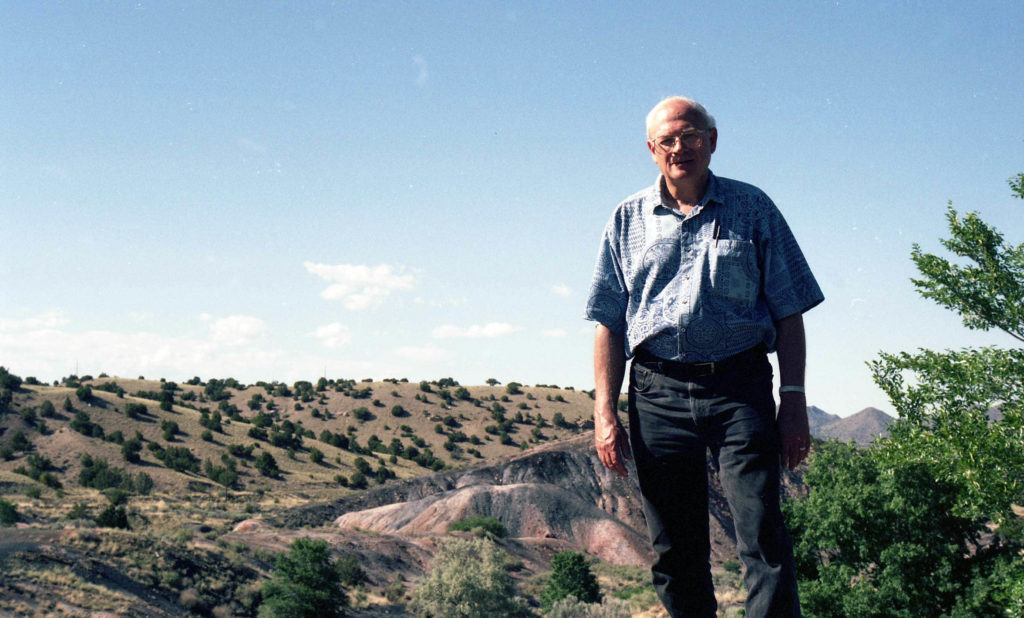 Todd Moore in New Mexico badlands —- May 29, 1994 —- photo by Mark Weber —- I was telling Todd why bother with poetry readings when only 12 people, a wino, and a dog show up? To which, Todd added philosophically, “And the dog is drunk.” Here’s one of his poems: