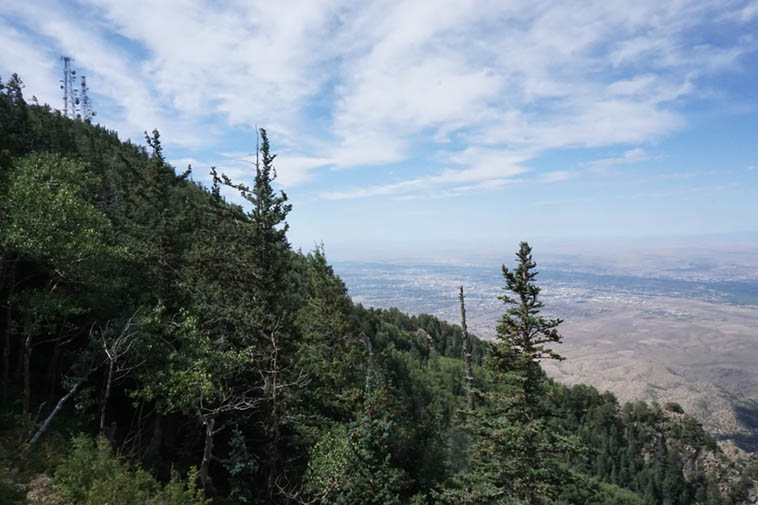 See those radio & television broadcast towers to the left? That’s KUNM’s signal shooting out over the state of New Mexico, and in this shot, that’s Albuquerque, that dark swatch is the Rio Grande of yore —- Sandia Crest —- September 2, 2o19 — photo by Mark Weber at 10,679 feet elevation.

At lunch the other day with Arlen I was telling him how I sure can see how someone would opt to become a hermit, you know, just stay inside and don’t go out, because once you get out in the world the world can be complicated and weird. Arlen agreed wholeheartedly. You get out into the world and the world happens to you. How often I have thought of the old Chinese mountain hermit poets but even Han Shan came down from his cave now & again to wash dishes at the monastery.

You have all your worries, concerns, health of friends & family, climate change, what’s for breakfast? Will someone please get a flyswatter and take that fly out?

Here in Albuquerque last Friday evening outside a MacDonald’s on our main drag (Central Avenue) a good Samaritan intervened in a fracas between a man and a woman and the man shot the Samaritan dead. Who could foresee such a tragedy? You think of that lyric “. . . let me fly Out of this World.”

You’re landing at LaGuardia this Tuesday which is a giant construction zone these days, the last time I was there it took the shuttle almost as long to get across the Tri-Boro Bridge as it did to fly across the country.

Charley’s picking me up. The magnetic pull of Manhattan can’t get jack across the East River. Traffic snarls and the world awaits. Pray for us. If you don’t hear anything before long that’s where we’ll be.

All of a sudden the gas pedal flops to the floor. The cable has broke. You’re in traffic on the Hollywood Freeway (this really happen’d). You pull off onto the berm. Throw away your beer can, (in case a CHP drops by). Find a length of string, tie it to the throttle on the carburetor. Quickly jump back into the driver’s seat and with string in hand hanging out the window you regulate the gas & speed. World here we come. 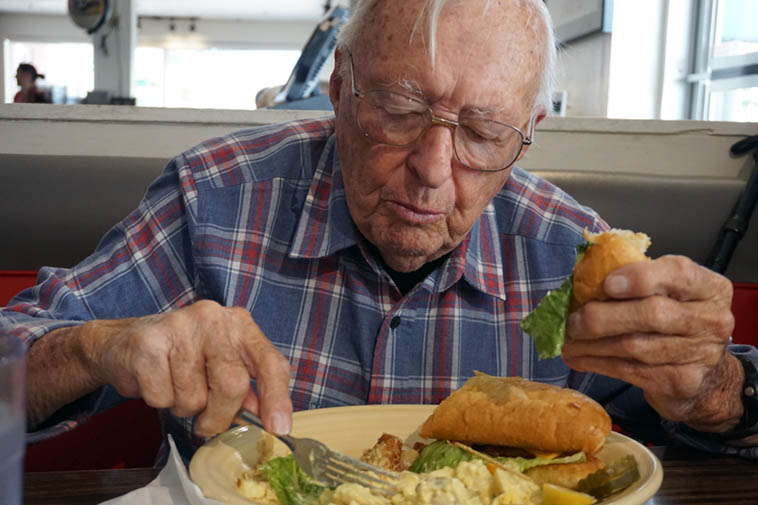 Hungry dude —- Lunch with master musician Arlen Asher —- August 21, 2o19 —- photo by Mark Weber —- We’re at Mannie’s, at Girard & Central, which has been there a long time, back in the 1940s on one of these corners, maybe where Mannie’s is? there was a big dance hall during the big band era. 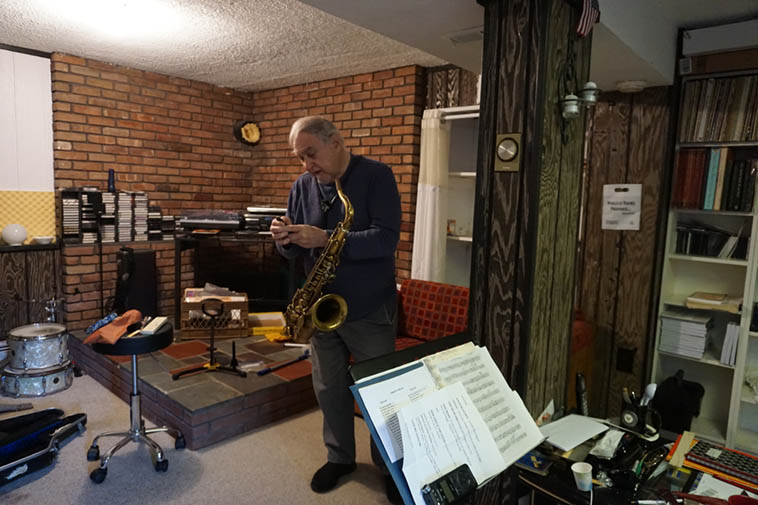 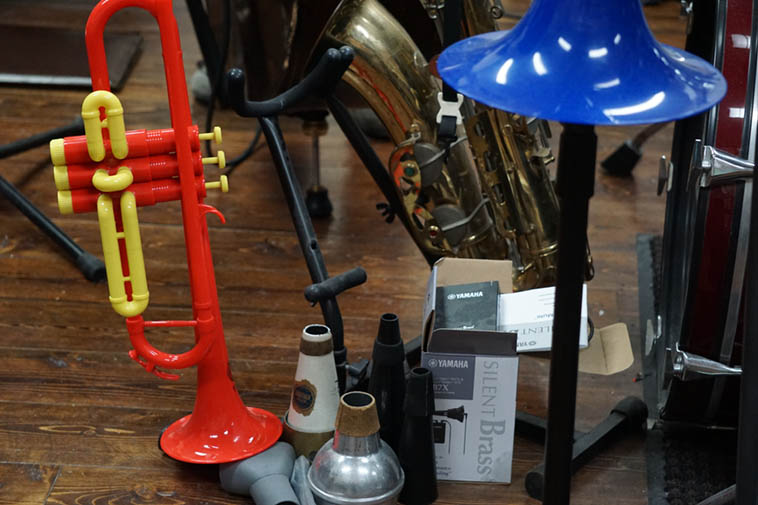 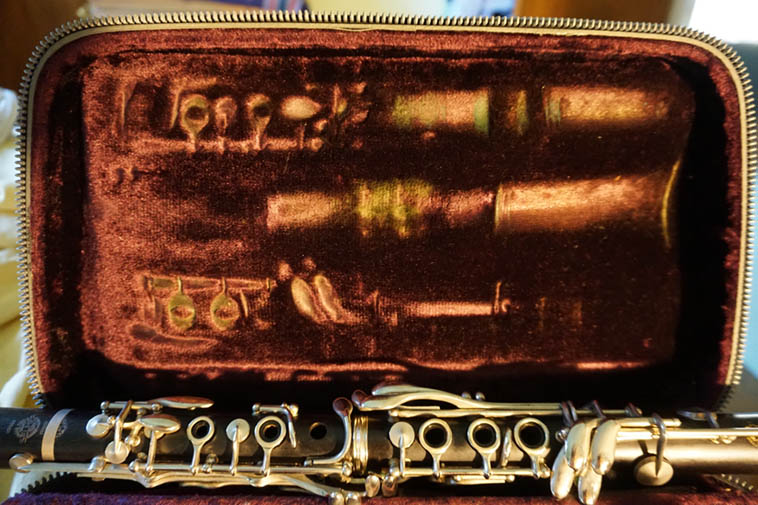 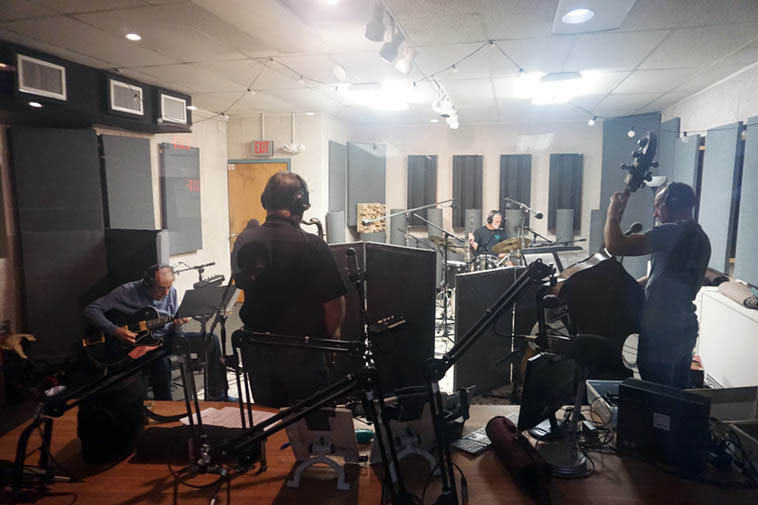 Session in Studio A —- woodwinds master Alex Murzyn moved to Santa Fe from the Bay Area last June (2o18) and we’ve been catching him around town playing in the clubs and at sessions at Bobby Shew’s studio and so we scheduled this recording session at KUNM and threw him into deep water: Michael Anthony(Gibson ES-775), Cal Haines (DW drumset), Colin Deuble(bass), Alex on tenor & flute —- great session August 19, 2o19 —- photo by Mark Weber —- (view from the control room, through the glass) 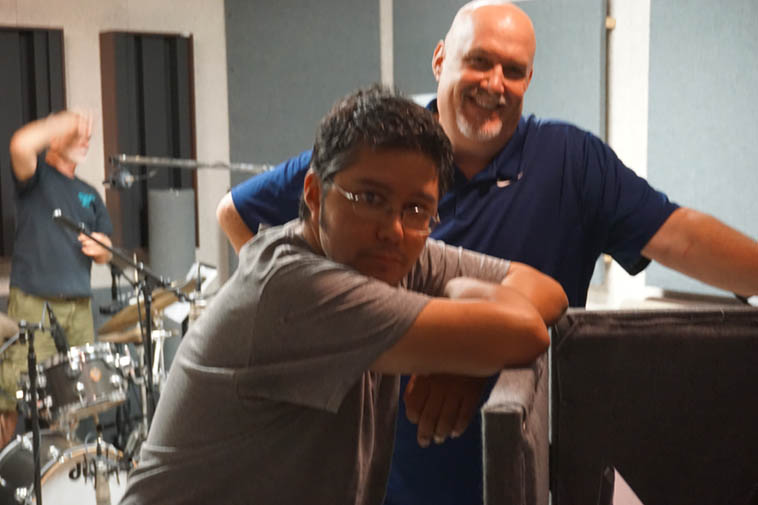 You can’t just point & shoot with these new digital cameras, like you could with a film camera, I gotta break the habit, you get these shots where the computer in the camera hasn’t done its focusing hoodoo, yet —- That’s KUNM engineer (and guitarist) Roman Garcia and his aide-de-camp John Strader (Cal Haines at the drumset) —- Studio A – August 19, 2o19 —- photo by Mark Weber 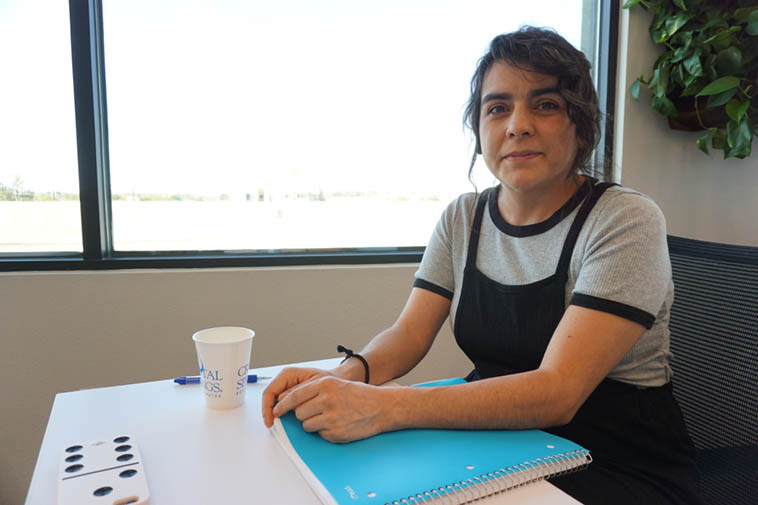 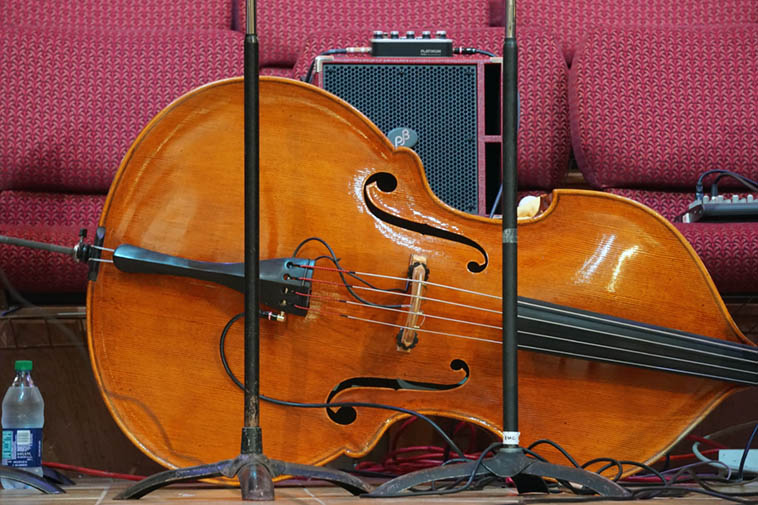 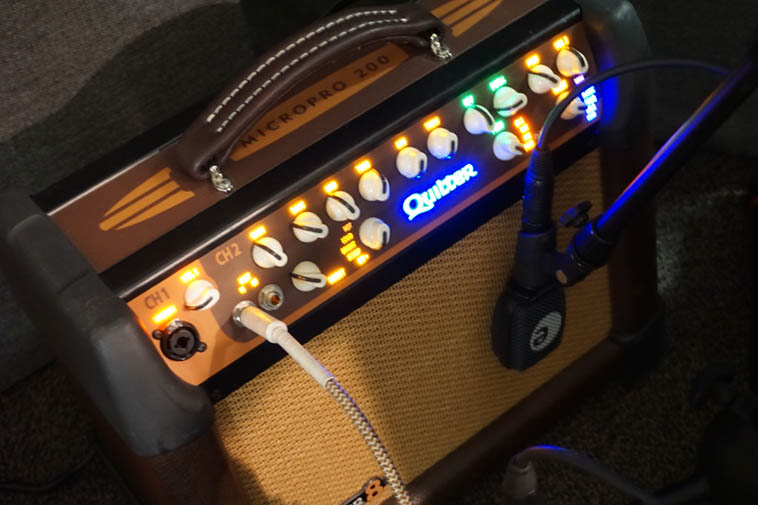 I love this amp, I always request Michael bring it along —- guitarist Michael Anthony that is —- August 19, 2o19 —- photo by Mark Weber 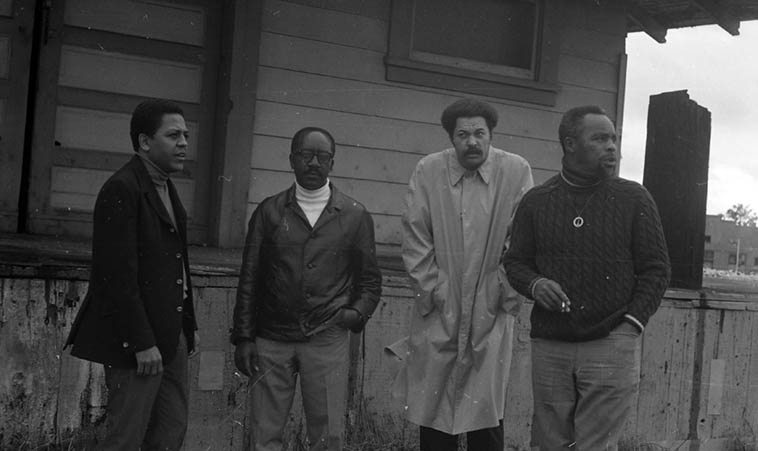 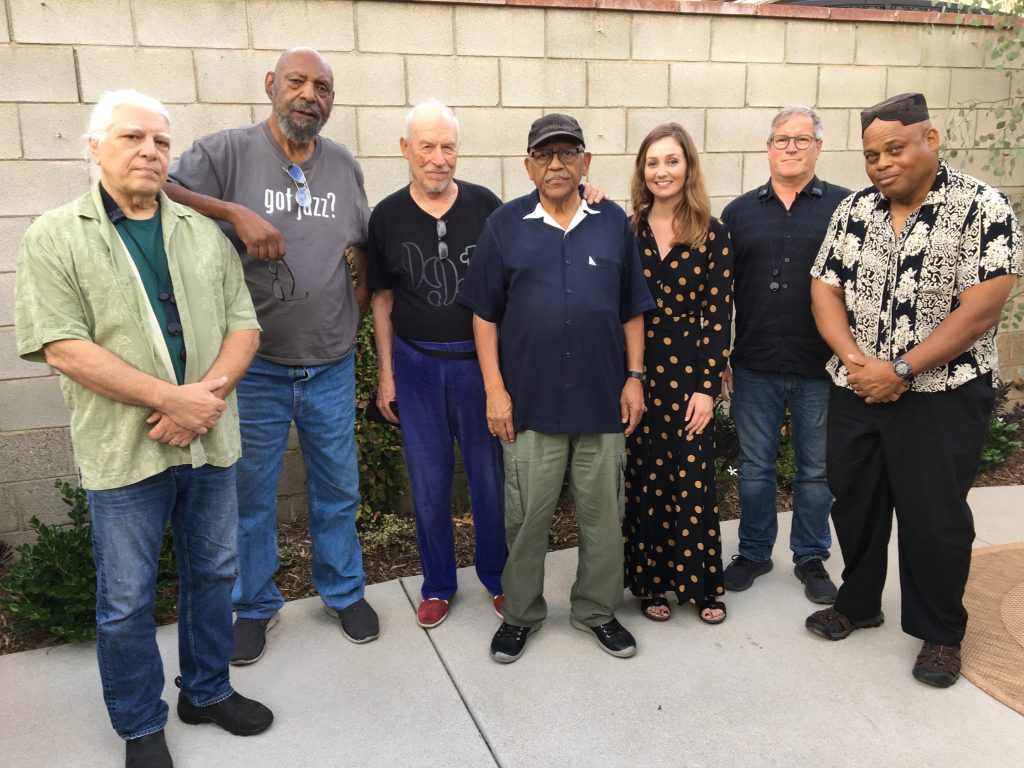 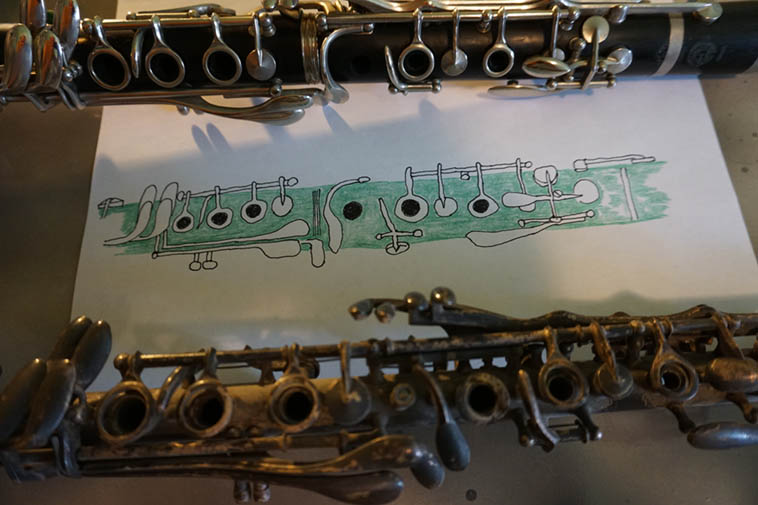 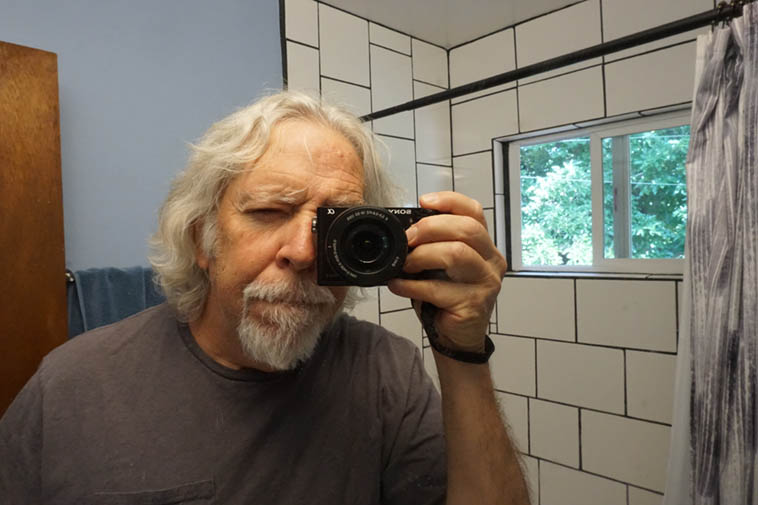 Shooting into a mirror —- August 23, 2o19 —- Self Portrait with my tile job I laid in last summer, looks kinda like a NYC subway stop doesn’t it?