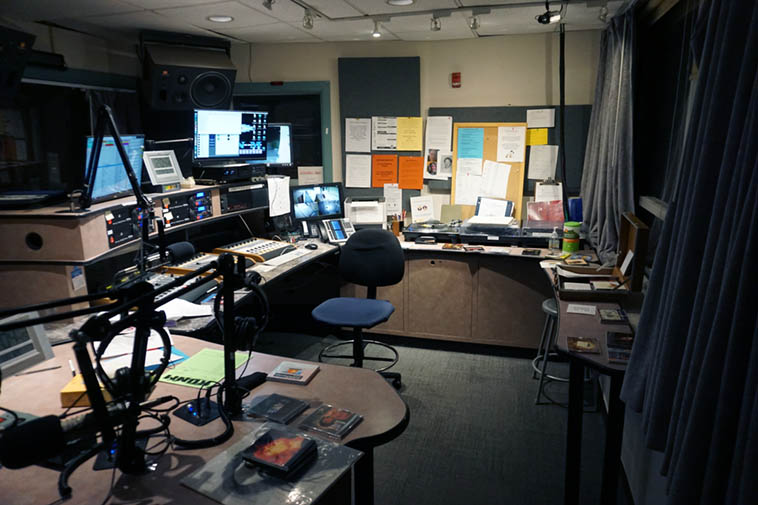 That’s what a radio show looks like a little after 12-midnight when I had the pleasure of hosting last Saturday night the Psychedelic Radio Head Shoppe —- photo by MW October 13 (14 if you want to get technical) 2o19 —— Here’s what I posted at FaceBook regarding the show:

I always say the Sixties are not over until the last hippie has died. Hitchhiked out of here, to Nirvana. Those of us who survived, and what a whirlwind it was, not only were we young, still taking things on board, still learning, all in the midst of a tsunami of social change. Some of us joined the counter culture, some of us infiltrated the system and helped turn things around toward a gentler kinder way of life, some of us went to mystic India, and some of us went to jail, some of us went back to the land, went off the grid, and some of us fell down the rabbit hole of drugs and never managed to negotiate with the Minotaur and get out of that Labyrinth. Meanwhile, the Sixties have persisted and here we are all these years later clearing the dust off our memories. We’ve seen the Sixties from several different angles.

I grew up in the massive suburbs of Los Angeles.

I had a rocking chair and with savings from my paper route I bought a Panasonic stereo system (from University Stereo! That advertised on KPPC and operated out of a garage in Pasadena, by a bunch of enterprising hippie college students). The stereo dial glowed aqua-green in the dark as I sat and rocked with my headphones all through the night listening to the radio. Stations like KPPC and later KMET had immeasurable influence on the young me. (I was the psychologists call a “rocker”) I’d slowly rock in the dark and absorb these transmissions from this other world coming over the secret airwaves of FM radio, so different from the Top 40 stations I had grown up with. This was a salvation of a sort. Probably reinforced a dangerous idealism. I sometimes cry to think how innocent we all were. The world was waiting to pounce on us and do all it could to disavow us of our hopes and dreams. Meanwhile, we still have the music. I am looking forward to spinning some of these world-changing sounds from the Psychedelic Sixties. This Saturday night on KUNM Albuquerque at 10pm for 3 hours of Sixties flashbacks on the Psychedelic Radio Head Shoppe. Thanks to Scott MacNicholl the Doctor for trading places (he’s doing my jazz show this Thursday and I’m doing his Psychedelic show this Saturday.

We’re living in the aftermath of an accumulative age, an era when we all crowded our homes with stuff (as George Carlin has it). Years ago, my dear friend Ric would move his belongings to new digs by selecting a few books from his small library and grab a modest change of clothes and promise to come back and get the rest later, which never happen’d. It’s going to be interesting to see how our culture deals with all this stuff, gawd, what a pile. I’m afraid much of the sorting an reapportioning falls to the living, will there be an upsurge in yard sales and flea markets? That depends on whether anybody wants all this stuff. A lot of it only means something to the original accumulator. Our own home is stuffed to the gills, mostly with books and records, it’s embarrassing, sort of, but . . . but . . . but . . . I like my stuff! There’s nothing more pleasurable than to walk across the room and pull a book off a shelf and find that Rachel Carson quote that has been on your mind lately, or to flip through the Ellington albums and pull out the monumental AFRO-EURASIAN ECLIPSE suite (1971) that Bobby Bradford reminded me the other day to re-visit. I specifically remember when I was a child the week I spent walking around proud that I had reached the age that I had things to put in my pockets. 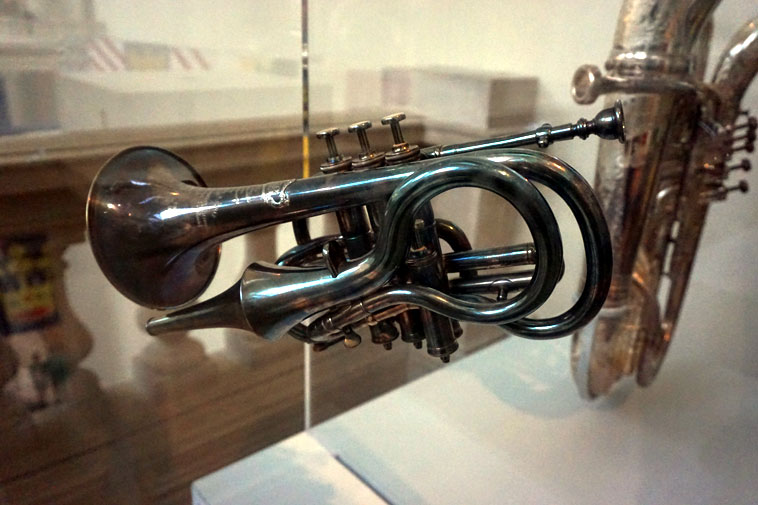 Echo cornet (1895, Paris) —- Metropolitan Museum of Art, NYC —- the placard says: “The second bell on this cornet takes the form of a bicone-shaped chamber, which functions as a built-in mute. This enabled players to switch rapidly between open and muted passages and was ideal for producing the echo effects that often featured in virtuoso cornet solos in the late nineteenth and early twentieth centuries.” —- photo by MW September 30, 2o19 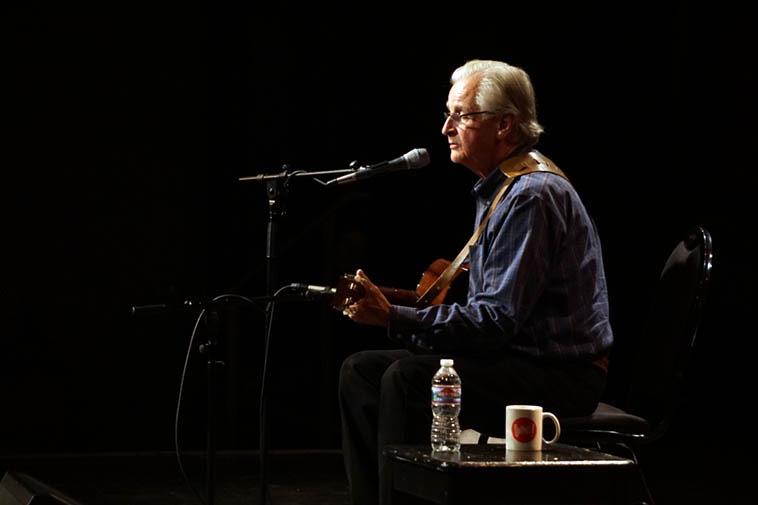 Geoff Muldaur —- With just a guitar and a coffee cup and a chair this guy makes it all real —- On his bi-annual swing through Albuquerque at Outpost Performance Space, October 5, 2o19 – photo by Mark Weber 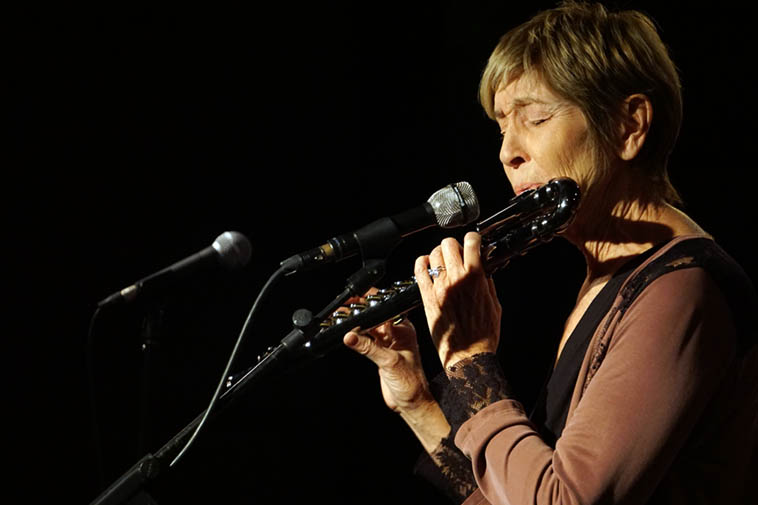 Ali Ryerson plays so much flute it’s scary, what a total jazzwoman, she’s all about lyric balance and trapeze —- at Outpost Performance Space —- October 10, 2o19 —- (we have the same birthday, she calls me her “younger twin” and I call her Kokopelli Ali) —- photo by Mark Weber 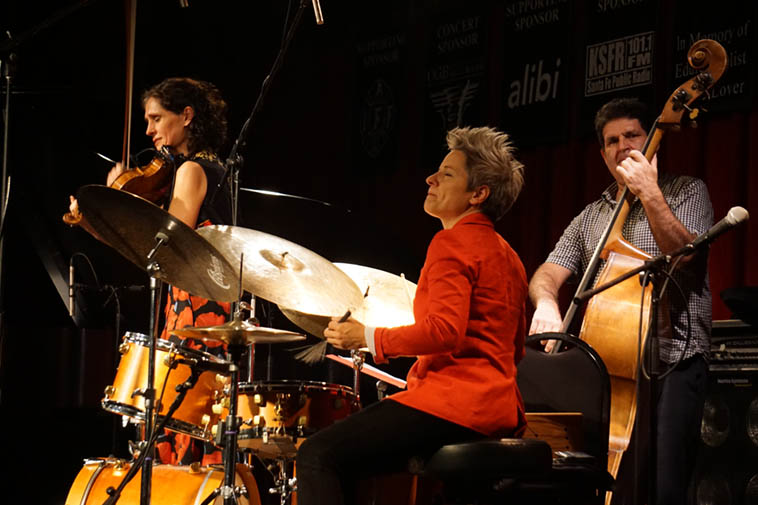 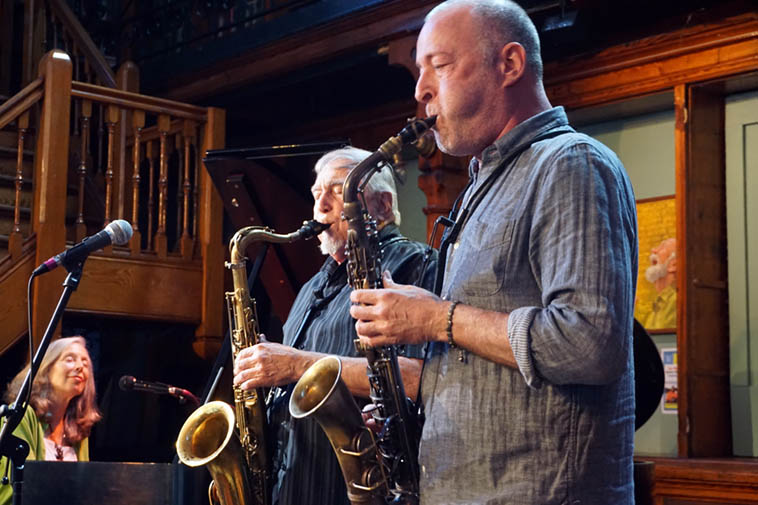 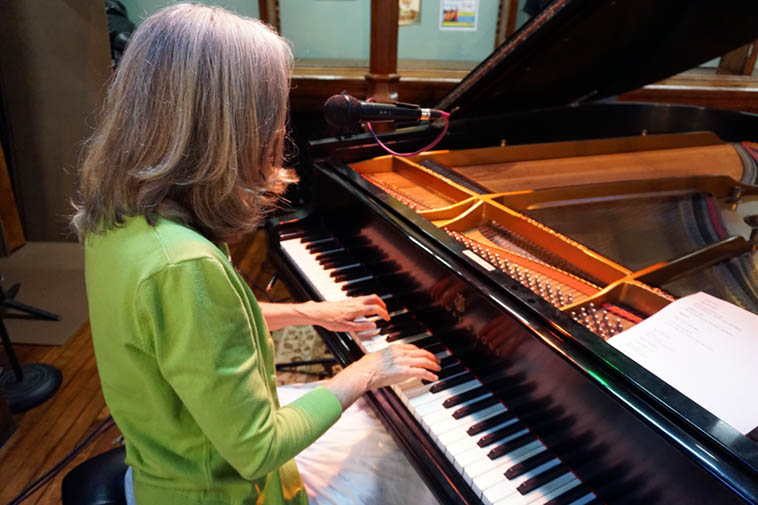 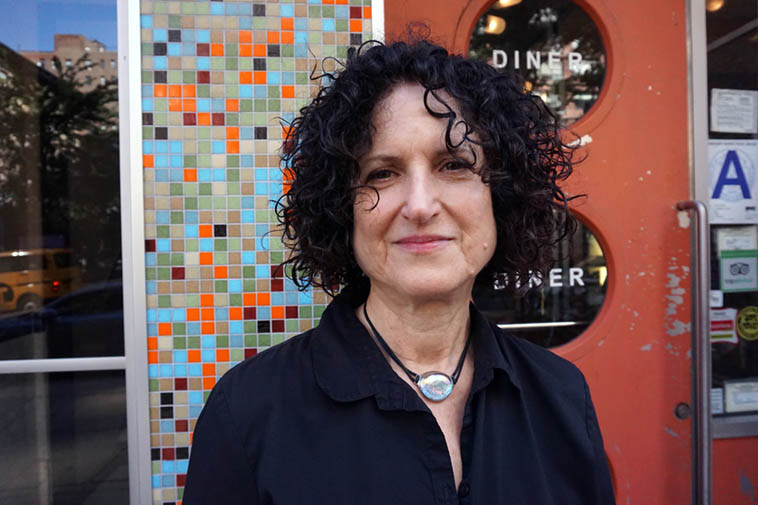 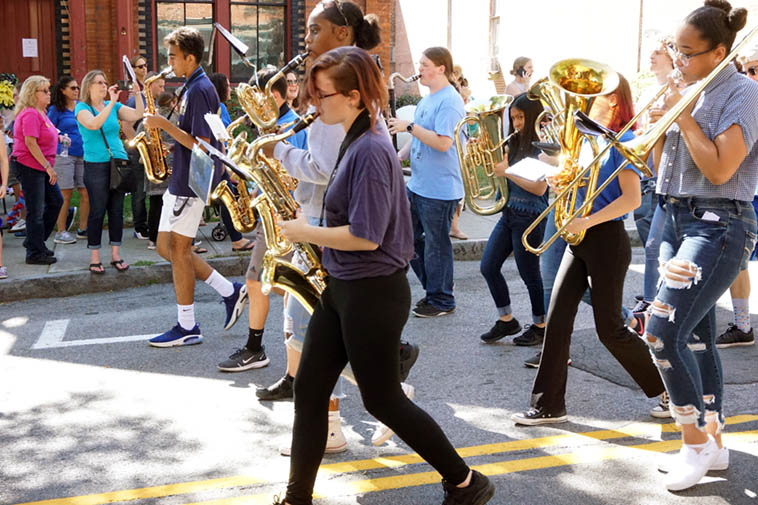 Spirit of Beacon Parade —- September 29, 2o19 —- in background is the Howland Cultural Center where the Kazzrie Jaxen – Charley Krachy Quintet is setting up for their afternoon performance —- photo by Mark Weber 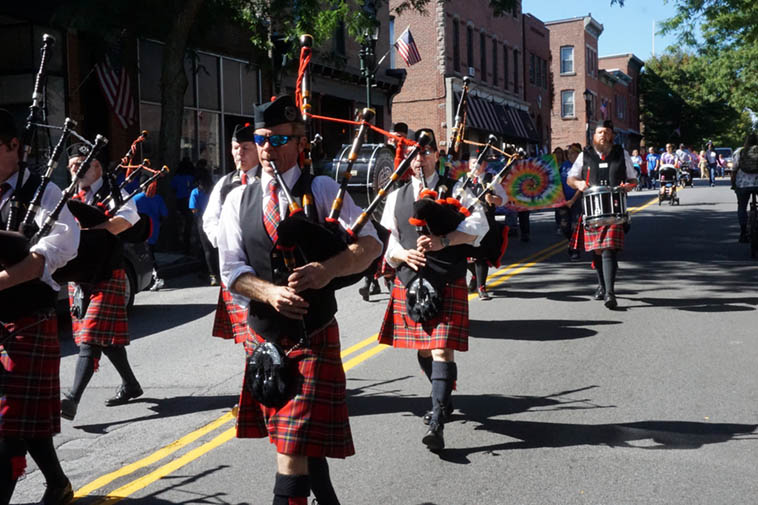 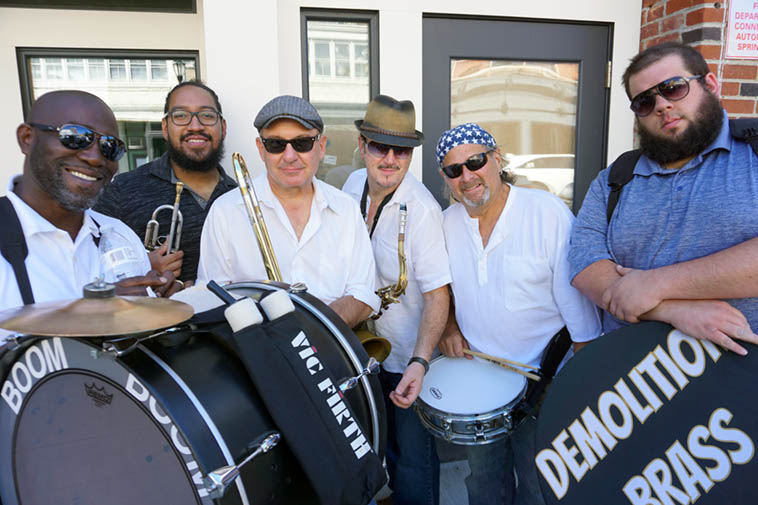 They marched in the Spirit of Beacon Parade —- September 29, 2o19 New York —- photo by Mark Weber 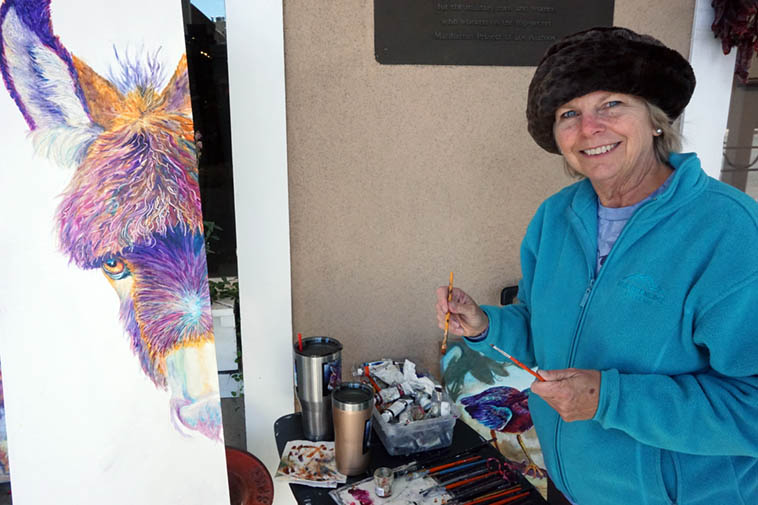 Sharon Markwardt —- her work is represented by Manitou Gallery, Santa Fe —- We got to talking about how expensive tube paints have become, she joked “That’s why I paint so thin!” —- photo by MW October 11, 2o19 on the sidewalk outside Manitou on East Palace Avenue 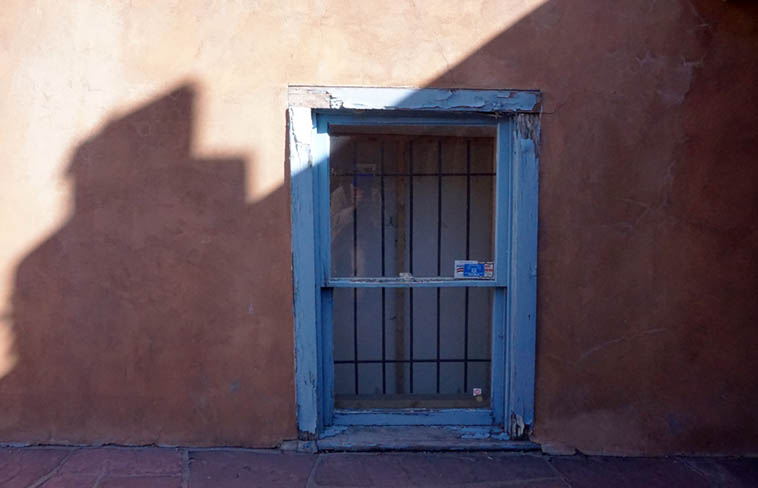 From my on-going series of Blue Windows —- photo by MW October 11, Santa Fe 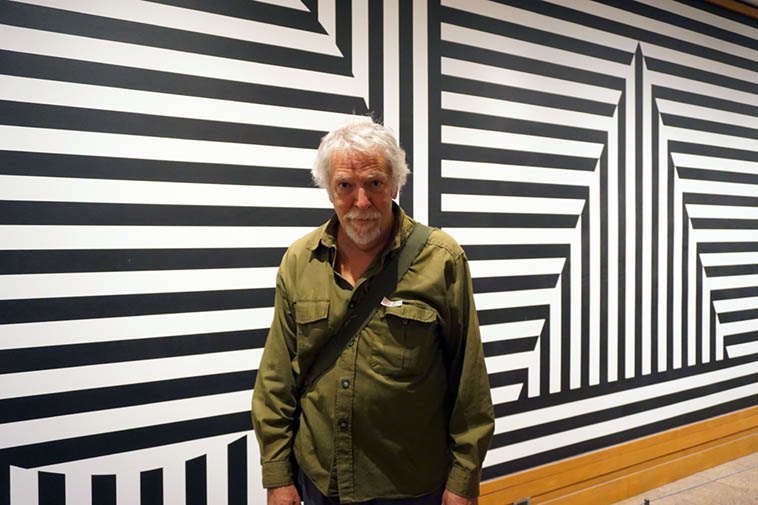 That’s me in my camo outfit at the Metropolitan Museum of Art snapped by Carol Liebowitz September 30, 2o19 —- My guess is: that wall design is by Victor Vasarely (1906-1997), if not, it’s certainly influenced by his amazing op art of which I am a giant fan