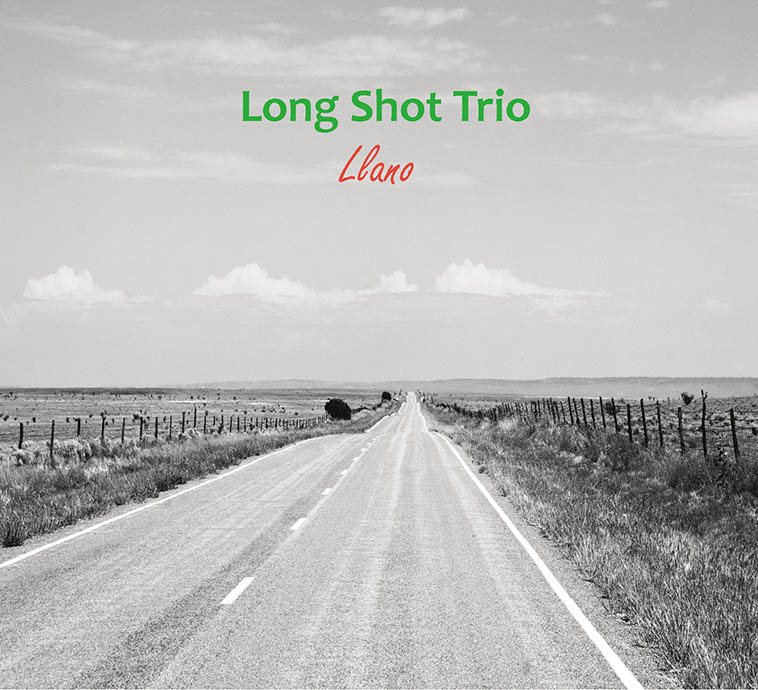 Over the years people have moved to Albuquerque for a variety of reasons. Aside from the Pueblo Indians who have been here since the Ice Age, and the Spanish conquistadors of the 1500s, it wasn’t until after the War (1945) that Anglos started streaming in when the population was less than 40,000. Before that a smattering of Dustbowl Okies were stranded here when their Maypop tires gave up the ghost. And before that in 1880 the railroad finally made its way to New Mexico. So, for a while it was the military presence (Kirtland AFB opened 1939) and Sandia Labs. Also, there was an influx when tuberculosis sanatoriums open’d in the 30s. You can still see the screened-in porches where they rehabilitated, I never fail to think of that when I drive by. Again, Albuquerque has never been a destination. I know Arlen & Jo Asher moved here in 1958 for the opportunities in TV. By the 1970s my own generation of back-to-the-land city hippies came, and as late as 1991 (when we got here) you could still see their psychedelic buses parked in the weeds outside of town. Population grew in leaps and bounds, 244,501 souls in 1970 to 384,736 in 1990 and almost double that now. The metropolitan area is roughly a million. As for crime, Trump sent in his SS shock troops ostensibly to quell crime in “Democrat-run cities,” which was his way of getting back at New Mexico, nobody here likes him, and our mayors and governor have repeatedly told him not to visit, we don’t like morons, and when he had one of his pathetic rallies we sent him a bill for the security detail, which he hasn’t paid, but he did send his SS as retaliation.

So, we’re eccentrics, nonconformists, unconventional, borderline hermits. Since the 1920s NM has been one of the Stations of the Cross for painters, and those were the years of the territory bands, musicians traveling the Great Plains in their Plymouths and long coats (for warmth in drafty cars) —- Lester Young’s family band settled in Albuquerque 1927-1929 (Lester went to Albuquerque High and got married here to his Beatrice, as with Dante, his muse). Jazz has had a foothold here since the War (1945). Somebody should write that history. When Bobby Shew moved back in 2007 he was amazed at the opportunities to play. And our Outpost Performance Space open’d its doors in 1991 as a concert venue for the avant-garde, which wasn’t too hard a sell in eccentric New Mex. Affordable living, easy climate (we even get snow!), hardly ever over 100-degrees due to our 6000-foot elevation. Albuquerque is an island of humanity, like Timbuktu, we’re in the middle of a desert, before the internet the world was somewhere else. The Rio Grande flows down out of the Colorado Rockies and the city grew up around it, under our Sandia Mountains.

So, what’s the story for the Long Shot Trio? Except for the drummer, they’re relative newcomers to the state. Master musicians with long histories and now have melded into the mix. Originally formed in April 2020 as a working band but Covid Lockdown changed their focus and they exist as a session trio, getting together often (with masks!) to play at Cal’s studio on top of Nob Hill. At their most far-flung I can hear Sonny Rollins when he and Max used to rip open the universe. Then, they’ll turn on a dime and bring in Bobby Shew (flugelhorn) for a tender and deeply felt run at George Cables’ “Helen’s Song.” I love this group. Absolutely top shelf artists. Something amazing. I’ll write more when I start to feel a little better. Meanwhile, visit www.longshottrio.com and pick up a copy of this gem.

[The above was posted on 24nov2020 at FB when I was in the midst of Covid-19 infection which lasted 3 weeks, ending on Dec 5, and shows that Janet and I had a fairly mild case, it certainly zeroed in on the lungs and you felt apathetic & tired —— Anyway, I”ll add to this as time goes on —– Thanks for reading —- Below, are some other notes I found on my computer]

I’ve known Cal since 1994, but, it wasn’t until 2007 when he returned from California that we began our long-standing working relationship. (He’s the photo tech for this website and helps me with other tech things.) On many levels of production. I’ve been there through many of his projects from his trios and his work with Bobby Shew, John Proulx, Tribute Trio, First Take Trio, among others, and my favorite: his reanimating the Super Sax repertoire of the 1970s.

This current trio, called The Long Shot Trio began in April 2020 as a gigging band but Covid Lockdown put the kibosh on that. So, they turned to private performances and recording sessions.

My friendship with Cal has allowed me to see how we all have different visions: Whereas, I see everything in words, images, sentences, and stories. Cal sees everything in rhythm.

From bassist Terry Burns on “Visitation”:

I was first introduced to this tune by the great bass player Rufus Reid in New York. He thought I might like it. Boy, was he right… I have performed (and recorded) this piece with numerous groups and in many instrumental settings. I think that this one is my favorite. Cal and Alex really found the right approach and feel to this tune and their playing is impeccable. Based upon the chord changes to “All God’s Children Got Rhythm,” this tune has become a “standard” for many bass players over the years since Paul Chambers wrote it. One of my favorite tracks on the recording; Cal and Alex really found the right stuff on this one!

Alex and I were driving to a fishing outing on the Chama River when I played Sidecar from Joe Henderson’s “So Near So Far” cd. We listened several times to that tune. Al Foster’s drumming created this ever-changing rhythm pattern that Joe just rode changing gears and lanes. Sounded like they were having fun. Next rehearsal the trio played it and we decided to record it on the cd. The tune does not have a typical form. The tune is 13 bars long with no bridge or any other structure. Sidecar has no chord changes, basically a free harmonic structure. But the head has a very strong eight note pattern that sets up several shifting accents. The ending is short and on the upbeat of 3. Our approach was to just see where we could go, based on Terry’s bass line and my cymbal/snare hits. During the sax solo, Alex guided us on his trip. He was not restrained by the form or changes. Musically freer than any other tune we recorded. At the session Terry and I decided to trade (not 4s or 8s). It was fun to just interact and respond.

I thought that I would write about Helen’s Song by George Cables. I wasn’t familiar with this song till Cal brought it in . What a beautiful tune. We arranged it so the solo section was just two chords. Bobby Shew was asked to come play on this for the recording and Terry came up with a dynamite arrangement. I really wanted the solo section to almost sound like a combination of mine and Bobby’s solo on this track . Listening back to it , I’m happy that it sounds that way. 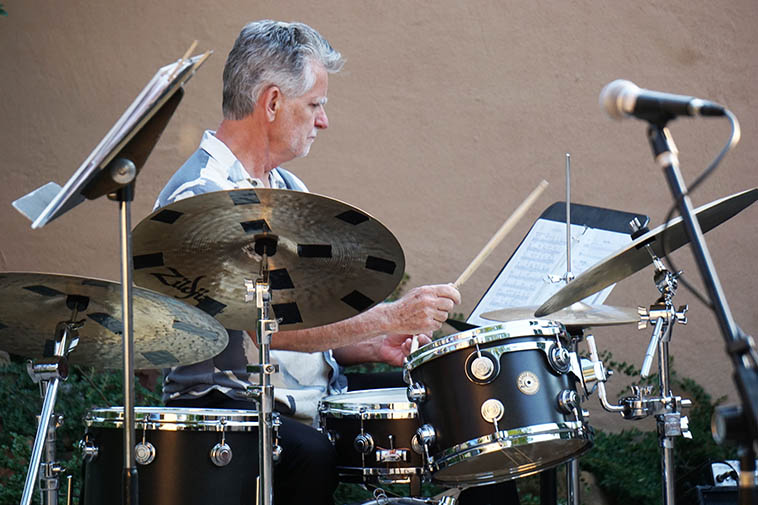 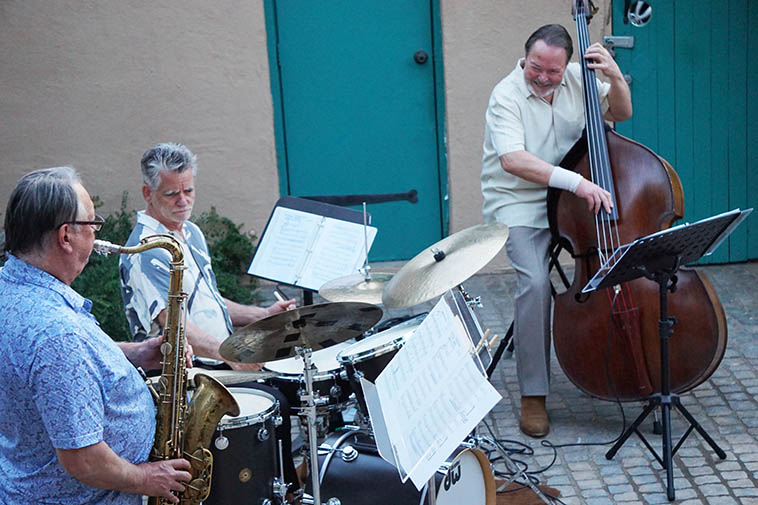 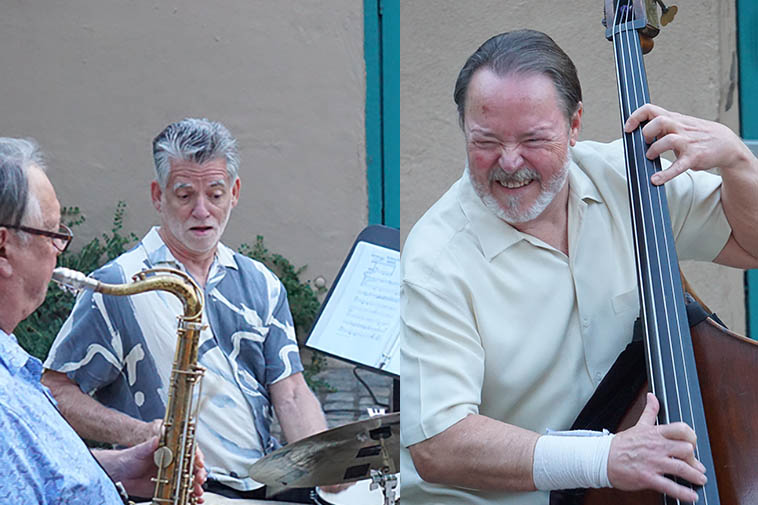 Long Shot Trio —- photo by MW (we recorded this concert but LLANO was recorded months later) “Llano” is New Mex term for the open prairie east of Albuquerque over the mountains, also known as Llano Estacado or Staked Plains 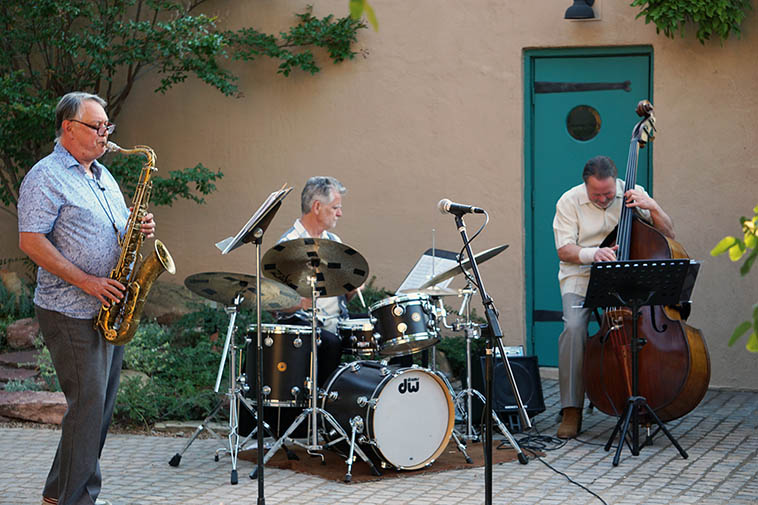 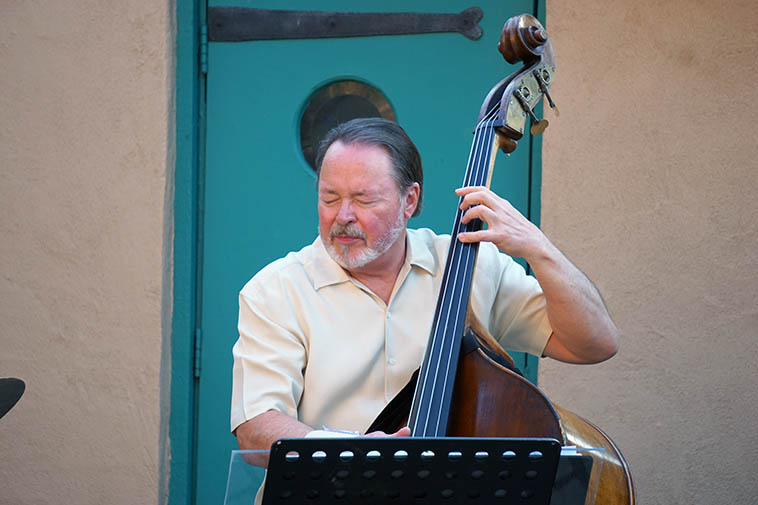 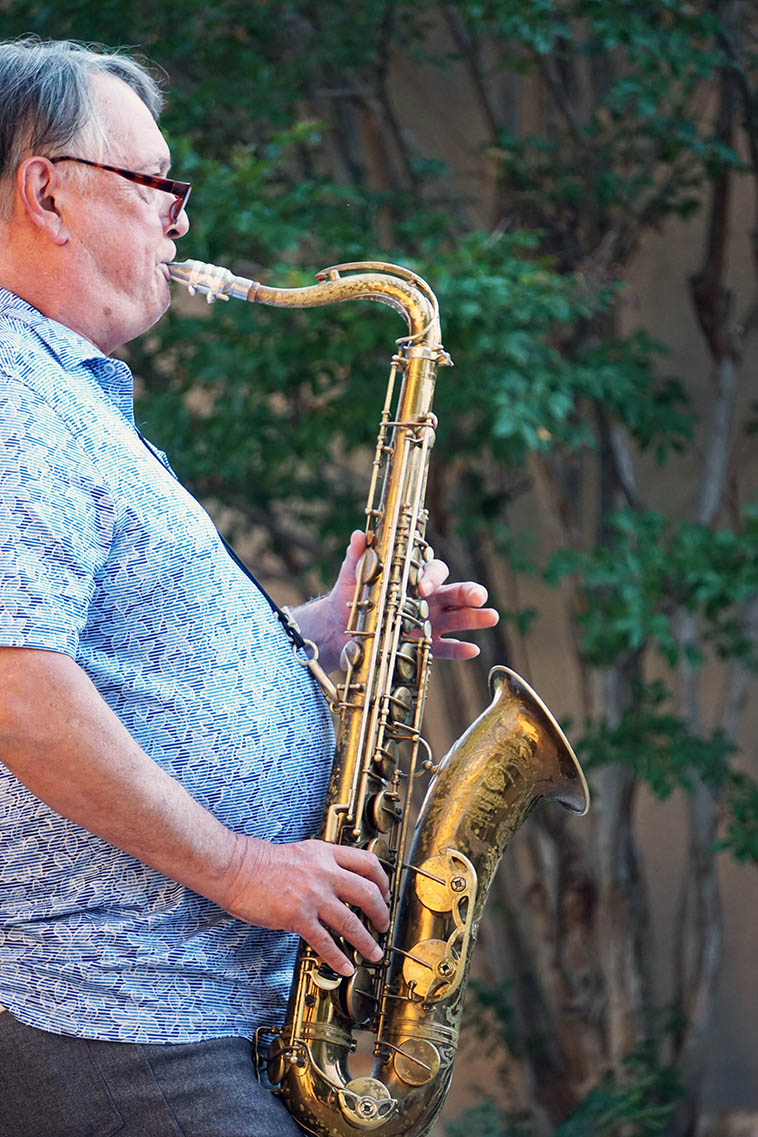 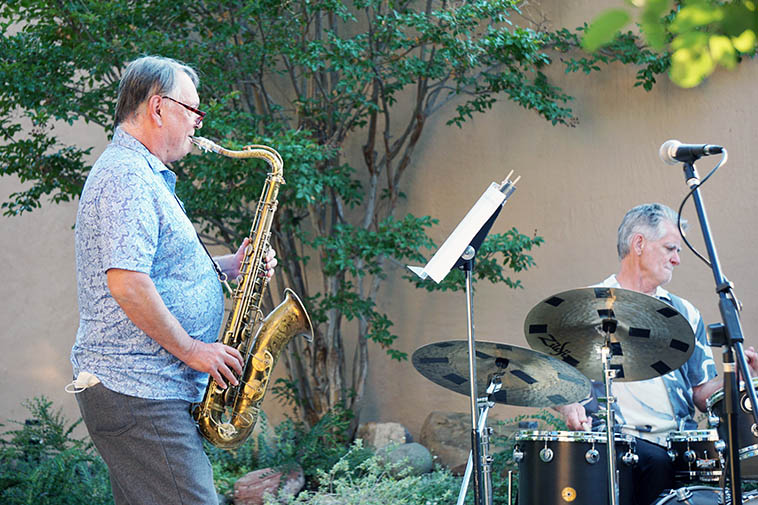 Portrait of Alex Murzyn with Covid-19 mask in his back pocket & 1954 Selmer Super Balanced Action tenor —- Alex moved to Santa Fe in 2018 —- That’s Cal on drumset at a little concert for the neighbors on his & Victoria’s patio June 20, 2020 Nob Hill, Albuquerque —- photo by Mark Weber 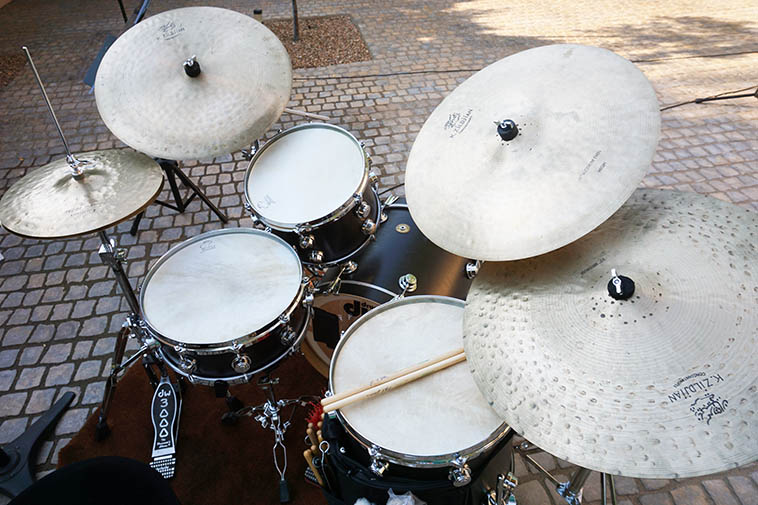 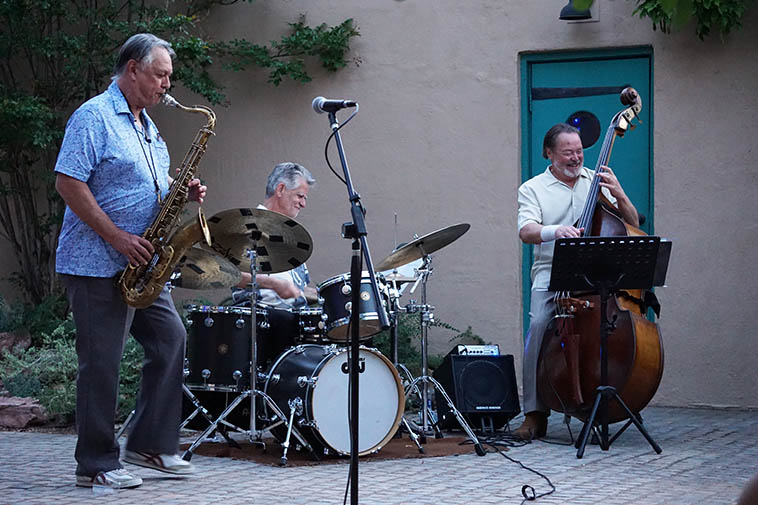 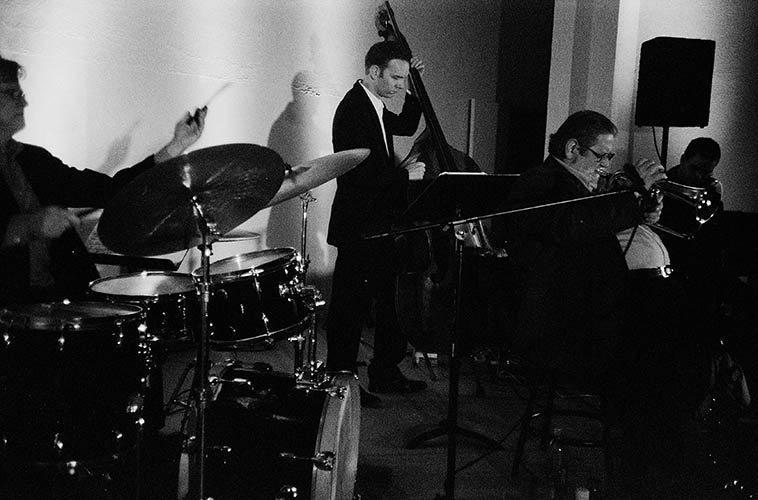 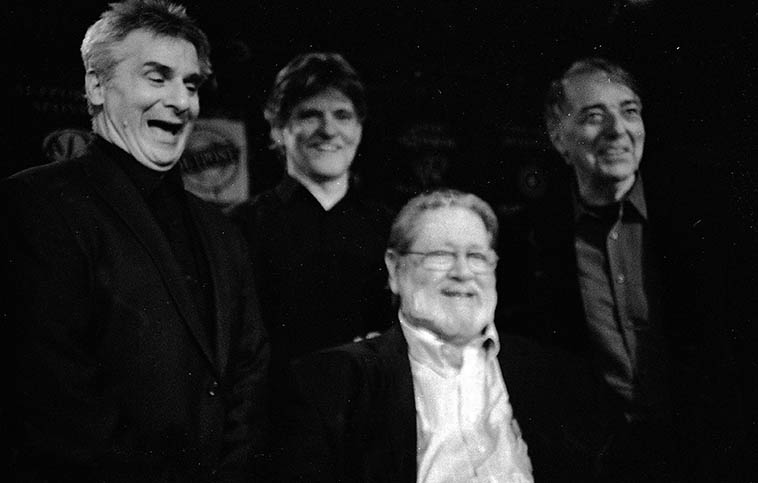 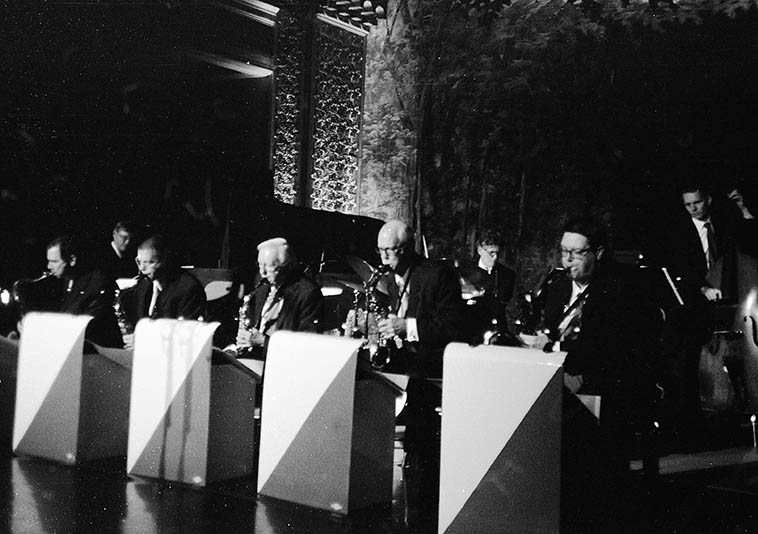 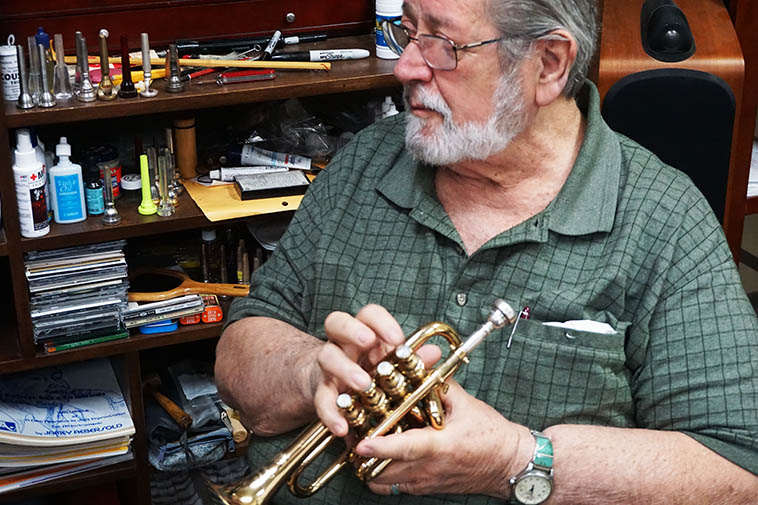 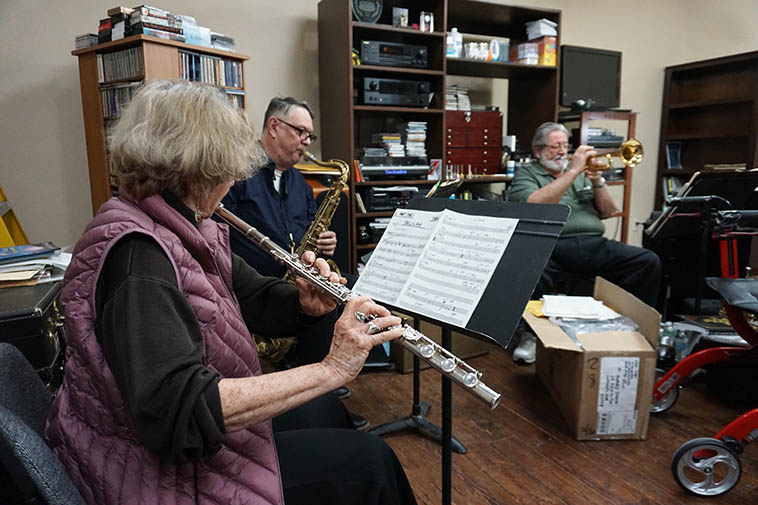 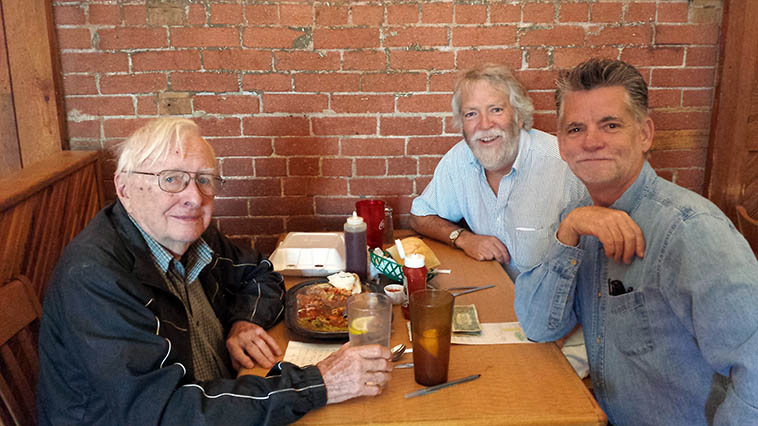 After a Monday morning radio show at KSFR lunch at our regular spot Tomasita’s on the Railyard, Santa Fe —- with the late dearly departed Arlen Asher, MW, Cal Haines —- photo by our waitress Jolene —- June 6, 2014 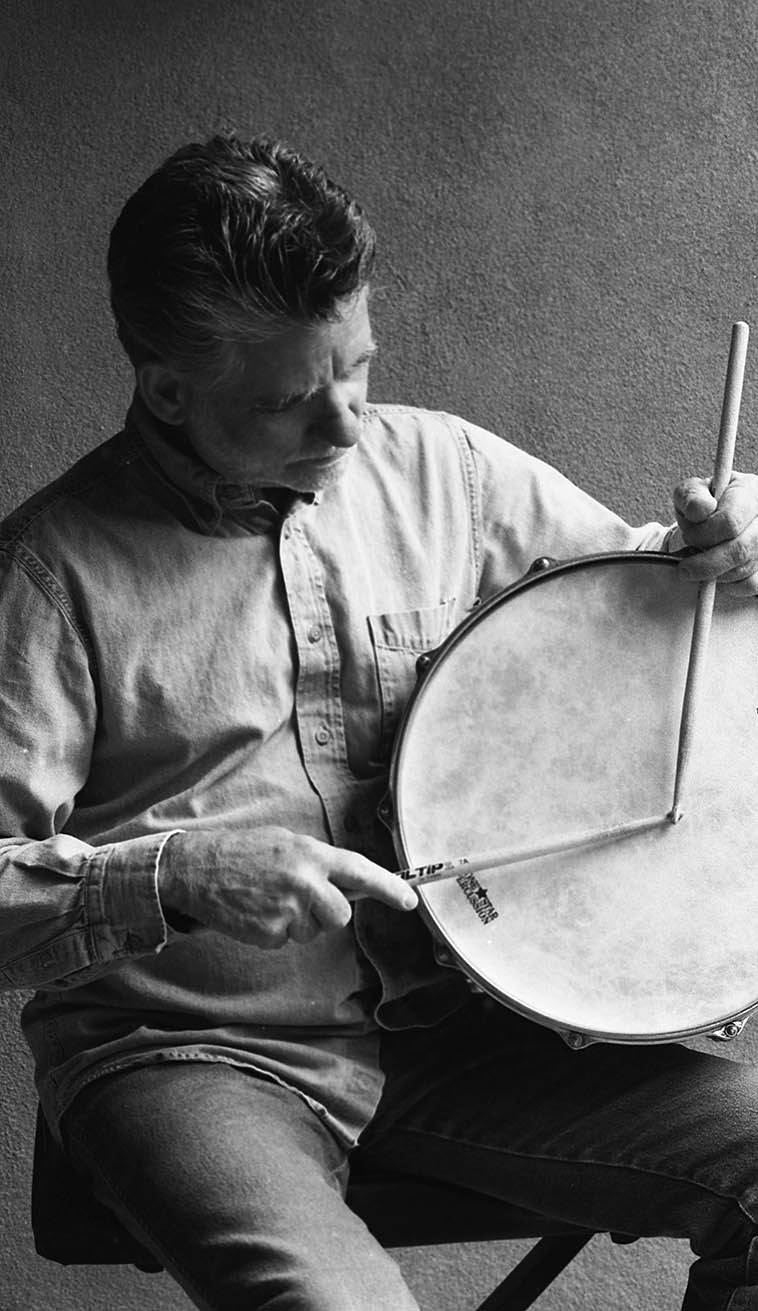