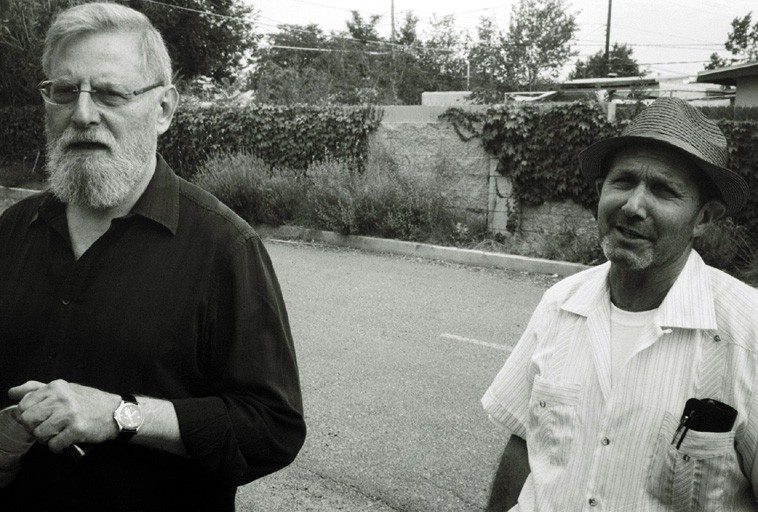 Somehow twenty-five years has gone by since opening of Outpost Performance Space and somehow chile stew is to blame. I myself wasn’t there at the very beginning — that fateful day when Tom Guralnick sat down to have a conversation with that bowl of chile stew — but I was not far away in the future (the first event Janet & I attended had to be September or August 1991). (Tom has always claimed it was the chile stew that got him to trade in his Boston baked beans and throw in with Albuquerque back in 1976.)

Today on the Thursday jazz radio show I’ll be playing recordings made during performance at the Outpost in celebration of this anniversary. The list of manifestations that have atomized that stage is staggering. Go to www.outpostspace.org to see complete list of artists who have worked there over the years. And if you are curious to know more about the history of this club pop by the Outpost this same evening to listen to Tom and myself in conversation regarding the odyssey that has been the Outpost Performance Space and what the continuing odyssey will be, as Tom has not retired his oars, yet. Fare forward voyagers. We’ll be sitting on the very stage JG & Tom & I built back in April 2000. This will be filmed for television by the A-Alive production team.

One of the great things that Outpost has provided over the years is a social milieu — as a locus for people to meet and talk. Not that we’re talking during performances, but there is usually a break between sets and time then to meet and visit and talk, and also before and afterwards. Very important for the health of any community.

The first couple years (founded March 1988) Outpost presentations were in various locations and concert halls. Fall of 1990 the original Outpost Performance Space opened at 112 Morningside Drive SE in Albuquerque, with the ensemble Curlew. Then, in May of 2000 opened at new location about two miles west of there, at present location: 210 Yale SE. 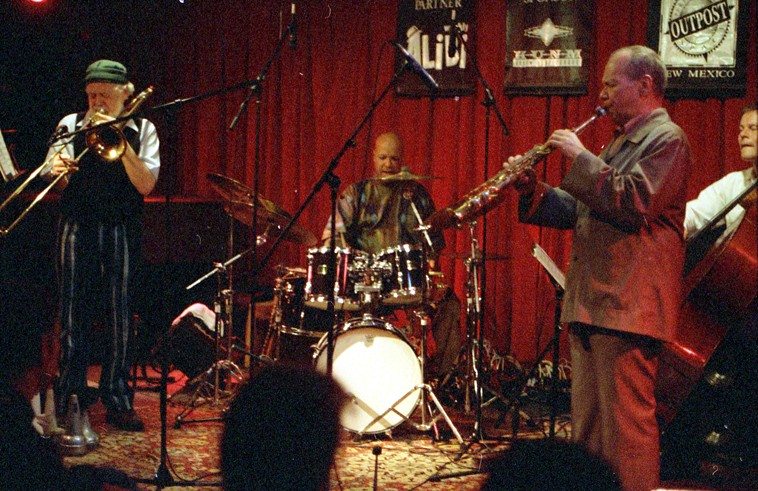 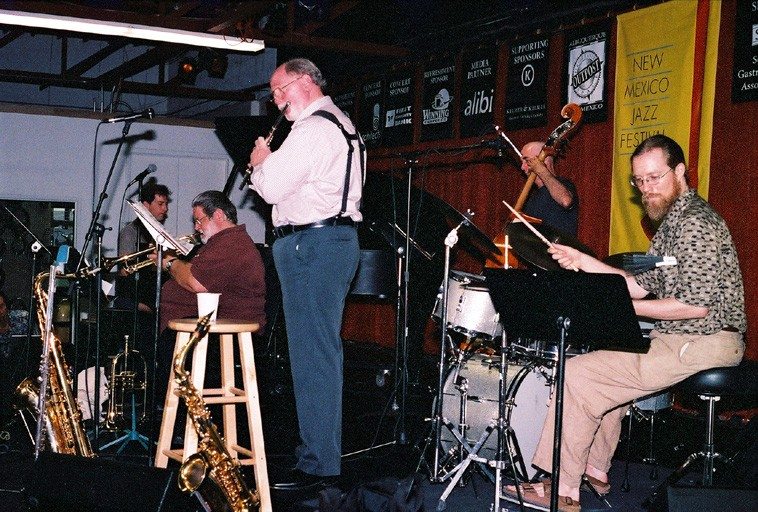 Bobby Shew-Gary Foster Quintet at Outpost Performance Space — July 19, 2007 — David Parlato, bass; Gary Foster, saxes & flutes; Stu MacAskie, piano; John Bartlit, drums; Bobby Shew, trumpet & flugelhorn — This was David Parlato’s official last gig before he retired! So, a couple of us were watching to see what his LAST NOTE would be: F — photo by Mark Weber — We’ll listen to a recording of Lanny Morgan’s tune “Friends Again” from this evening (Lanny wrote that line on the chords to “Just Friends”) 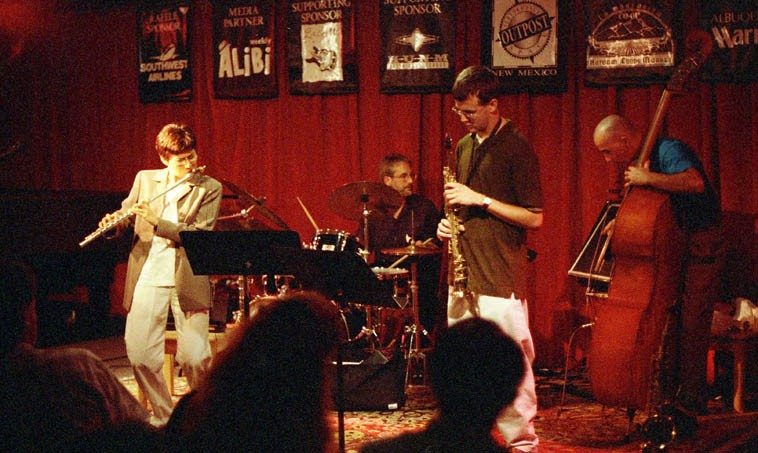 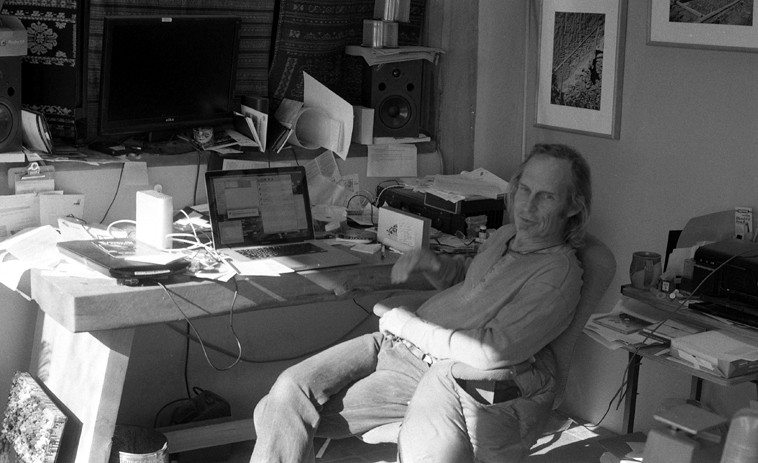 Steve Schmidt at Fly On The Wall Studios, Santa Fe, New Mexico — December 25, 2o12 — many of the live recordings at Outpost were engineered by Steve — photo by Mark Weber 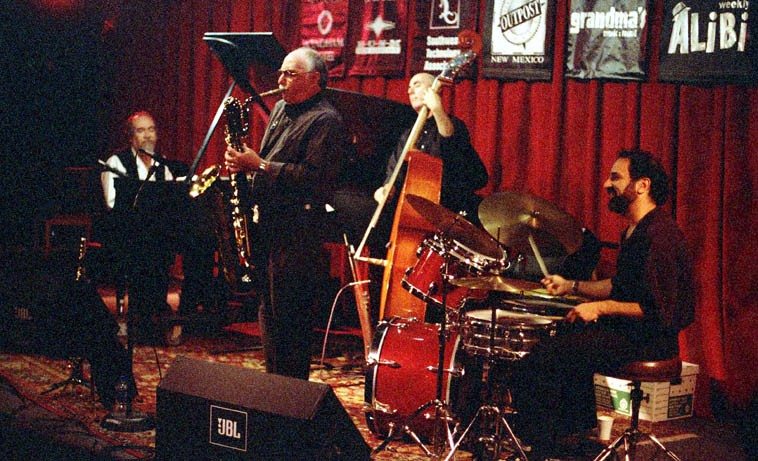 Nick Brignola-Roger Kellaway Quartet — Outpost Performance Space — September 13, 1999 — David Parlato, bass; John Trentacosta, drums; Nick, soprano & baritone sax; Roger, Steinway — David has always claimed this as one of his all-time favorite gigs to have played (David and John lived in Albuquerque and Santa Fe, respectively)(David has since re-located to Santa Fe and is a hypnotherapist)(Nick flew in from Albany and Roger flew in from Los Angeles) — I wish we had recordings of this evening! WOW, they were smokin’ — I remember Roger during a solo ( I was sitting near the piano and could see his fingers) got himself into a fix where a phrase he was working up wouldn’t fit into the structure and he just had to laugh it off: And that’s what jazz is all about, it was tremendous just that way — photo by Mark Weber 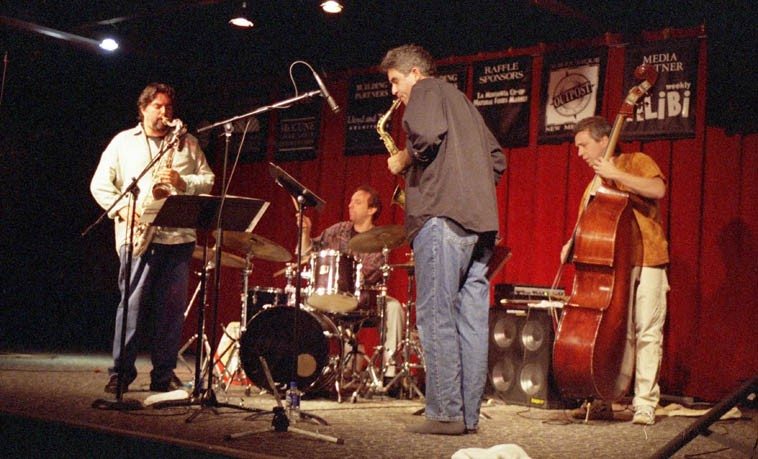 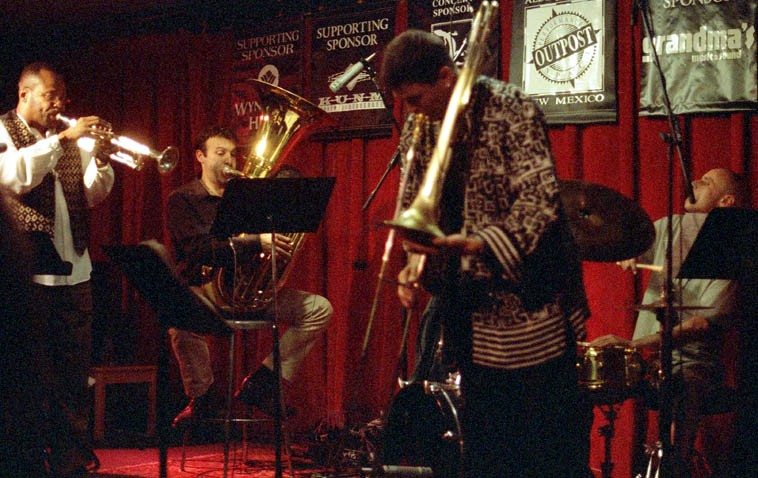 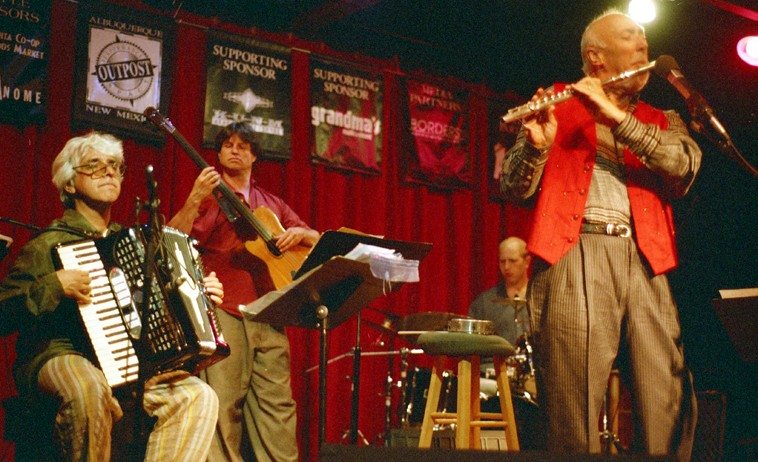 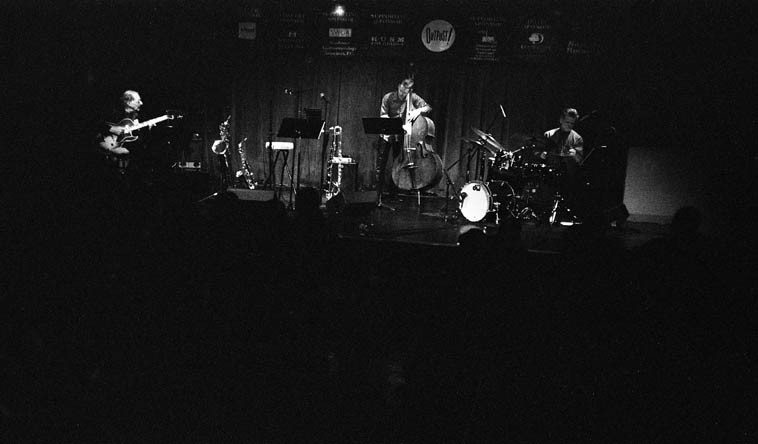 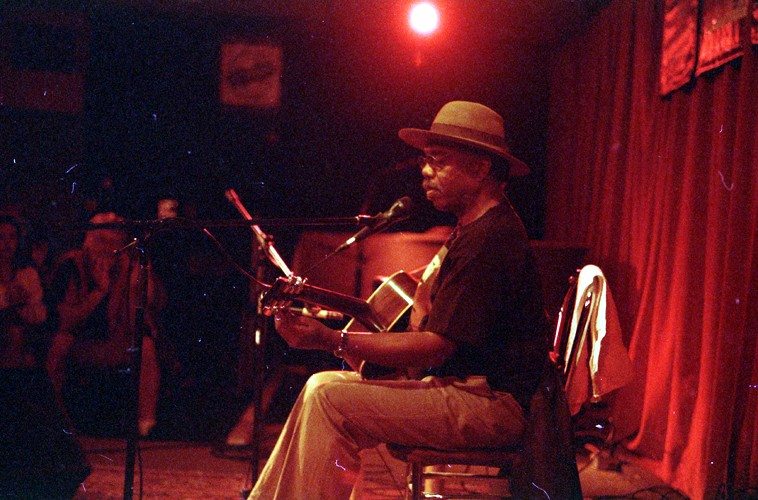 Philadelphia Jerry Ricks at old Outpost — May 22, 1999 — Tom has booked a lot of old blues guys over the years, like Johnny Shines, Pops Staples, Honeyboy Edwards, and many others (Honeyboy Edwards made a record at the Outpost maybe I’ll play some of that) — anyway, the late Jerry Ricks was quite a revelation for me, what a great bluesman, he was a mixture of “Piedmont” finger-picking and Mississippi Delta, and purely contemporary — photo by Mark Weber 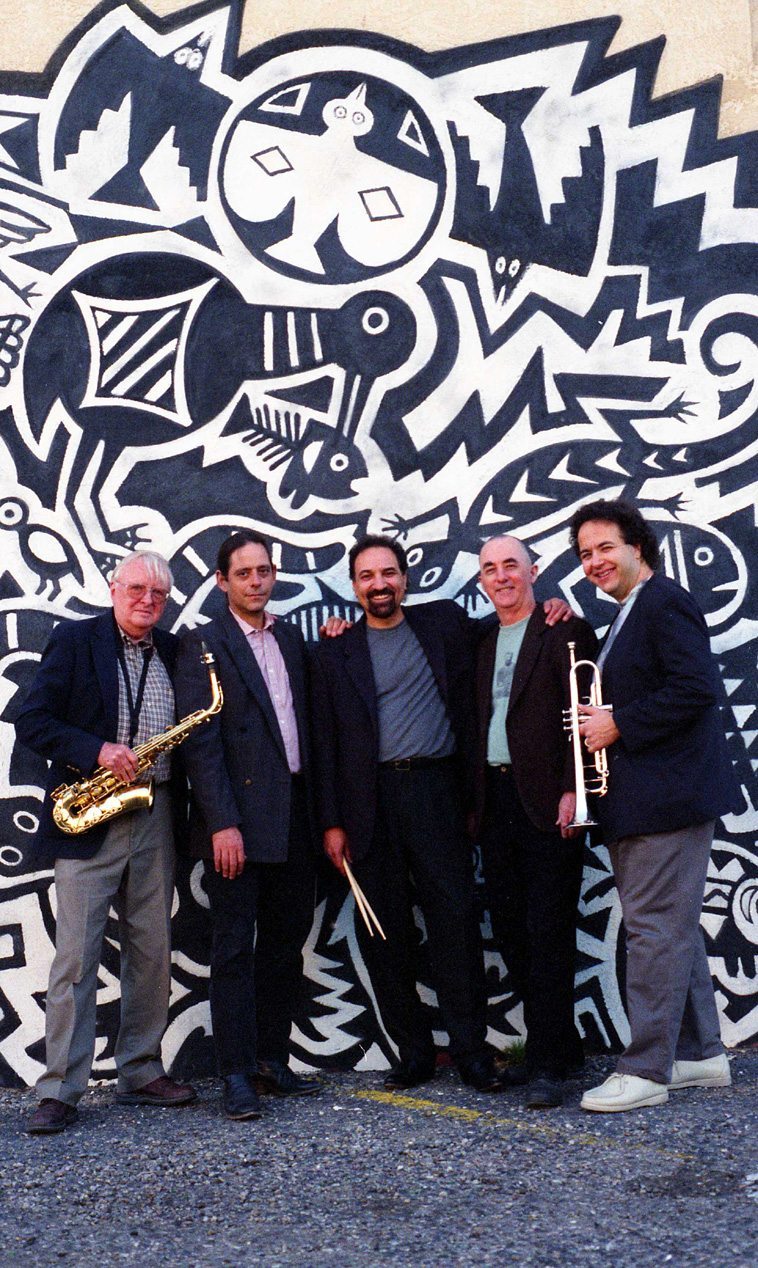 John Trentacosta’s Straight Up — standing out in the back of the old Outpost — April 17, 2000 — Arlen Asher, woodwinds; Bob Fox, pianist; John Trentacosta, drums; David Parlato, bass; Michael Morreale, trumpet — this is near the end of the tenure at this location — within a month the new Outpost Performance Space opens — photo by Mark Weber 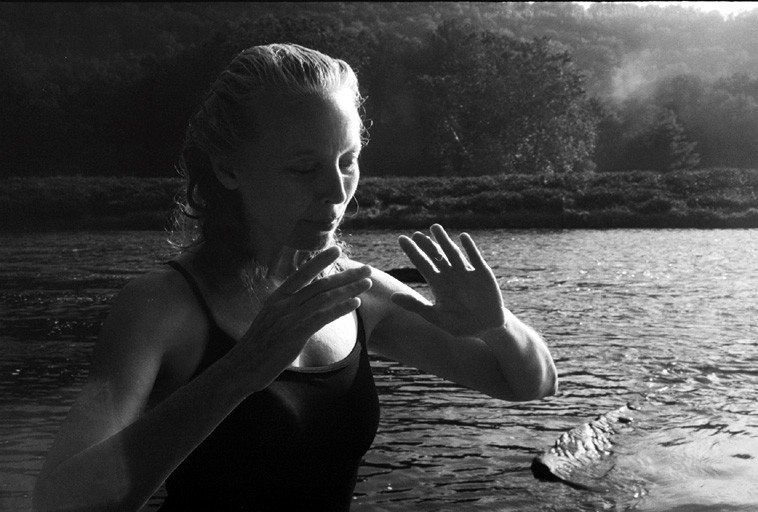 Kazzrie Jaxen in the Delaware River, Callicoon, New York — August 7, 2o11 — photo by Mark Weber — Kazzrie’s concert at the Outpost the year before this photo was off the map — it was like we all levitated or something, none of us were ever the same afterwards — I’ll play some of her solo piano music from this concert