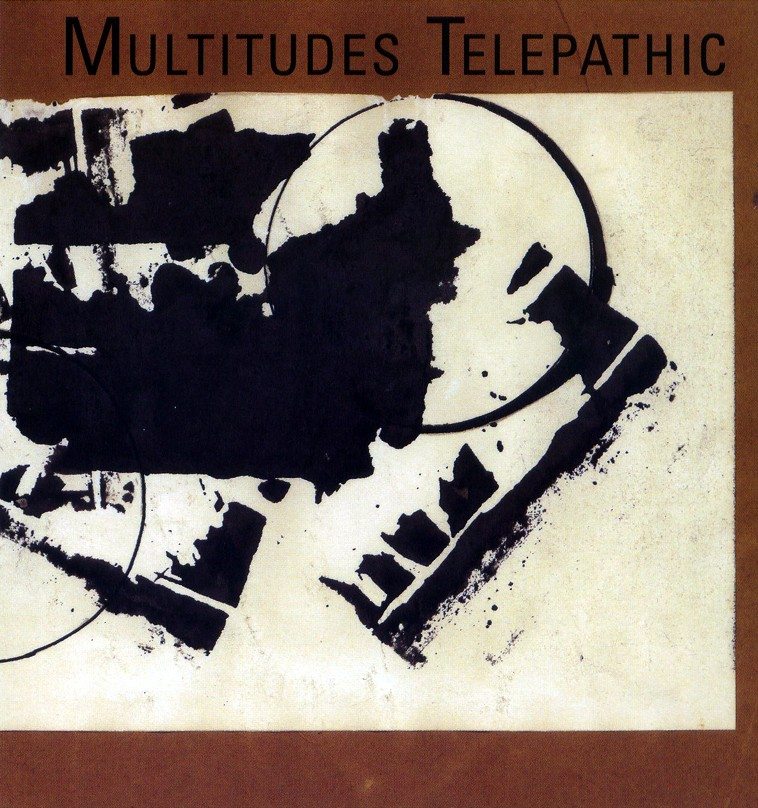 How
could
I
have possibly
known of this shrouded island
if not for
some memory from a previous life?

It helps me to remember that
I am inside my body —

this walking around, strolling, watching the clouds –

there is less & less to say

(the mind has all kinds of chatter it likes to send to the mouth
for you to fill up the world, but
it is mostly baloney, has
no substance other than anxiety )

what am I doing here?
telling you things you probably already know
don’t need to know in any case

Legends of trumpets
from across the water ———

From a windfall oak
we build a ship —-

They do not always return

The birds also go that way, when
days become shorter and more chill
flying south along the river
but return in summer

POEM FIVE IS A DANCE

“All around the water tower
waiting for a train” [—–Jimmie Rodgers ]

Reading a newspaper in the rain

Water fills the buckets and my brain
has nothing to complain

Horses running free into the clouds

Me and a couple crows keeping dry under this awning

Quite a bit going on that has no name

Poking around in the rain

Train circles around and comes back again

Waiting for a train

A flashing crooked tongue of fire
cracks open the black clouds . . . .
Very swift are the horses of Rohan

Ancient legends of trumpets
from across the water . . . .

Thrown open before the swirling wind
a clicking flame shoots out . . . .

trees upon trees
on the ledge above this canyon

boulders and rocks and granite
a vast forest in these uplands

cyclofuglas in the winds above

and a flame shoots out

on some level you don’t expect that —

but then, anything’s possible

and what then, weary traveler?

I, more than anyone I know
need to pause
before
the food, the apple, the
carrot, the plate
and think about
the amazing confluence
of inter-connections
that
such a thing like an apple
exists
in such interdependence with myself:

That the Earth, this water planet, is just
the right distance from the sun

Now, I need learn the way into blessing. 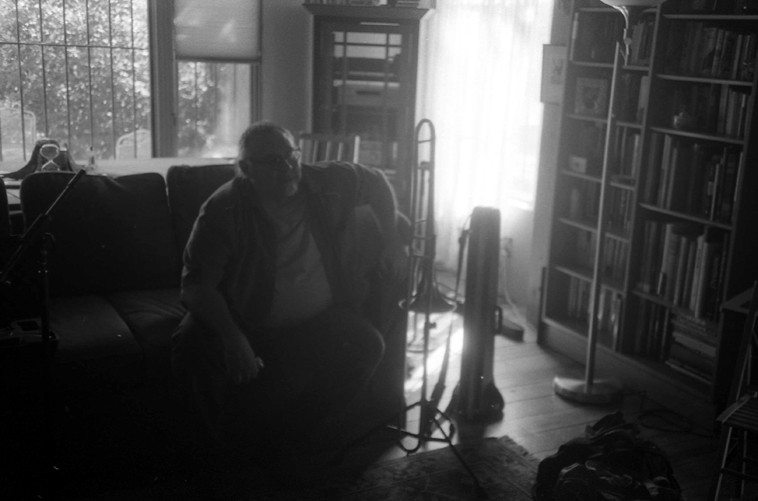 A poem cycle is as complicated as you want to make it.

For the most part the poems should be interlocking. The sequence should unfold and build up a feeling or move toward a central object. In this case, I was able to listen to the music and use it for my starting point. Michael had sent me his rough edits, which I have to say were pure genius. The actual master session tapes are in the neighborhood of two hours of genial playing and is very good listening as well, but after Michael carved out the shape of this project, I was astounded, that guy really knows what he’s doing. It’s gratifying to work with someone of his know how. And then he asked me to see if I could put some poems to it, and that took 5 weeks of work.

Wayne Peet also made some editorial suggestions, as well, which I incorporated into the text reading during the Newzone Studio session in Los Angeles. Michael put the titles to about half of them, and he grabbed the title for the CD from Poem 7.

I asked Michael about this session — was it a blowing session and the CD an afterthought? (I was there but I don’t remember exactly.) He answered: “Particularly, whenever I record free improvisation, I always wonder if any of the recording will be worthwhile. Sometimes it works and sometimes it doesn’t. In this specific instance with the addition of the spoken word I feel it works very well.” Then I asked about his editing process and he said: “Finding material I like and figuring out how to string it together.”

Steve Schmidt is ever an ally to freedom, wide-open spaces, ornithology and organicism, a beekeeper and recording engineer. Clyde is from Vancouver, British Columbia; Michael is from Los Angeles; Dave and Steve are from Santa Fe. I’ve been in Albuquerque 22 years.

All the music on this CD was composed spontaneously-collectively-improvised. It was Dave Wayne’s birthday that day and his house sits on the side of a hill in Santa Fe where we had vista views of summer valleys looking south. At a break Dave dashed out and brought home gourmet pizzas. Cindy made a nectarine-blueberry-strawberry crisp that just knocked us out. It was an afternoon session — Clyde and Michael had to be in Albuquerque that night for a rehearsal with Rich & Carson who were arriving from Portland later — they had a gig on the Roost Series at the Outpost Performance Space as memebers of the Rich Halley Quartet the following evening.

I asked Michael to summarize this project:

“The one aspect that most appeals to me about any CD and it is certainly true of this one, is the journey. You don’t know where the music will take you. You don’t know when the words will start or stop. I love the not knowing. I realized much has been said about our brains wishing for the familiar and the fact that we become uncomfortable when our reality is not familiar. I read once this statement and have never forgotten it: ‘Familiarity brings heightened pleasure from something that was once considered radical.’ In order for that statement to make sense, one has to stretch their reality. This CD I think makes that exercise easier. Why? Because the material is not so different, it is the organization of the material that might be somewhat different.” [email 26nov13] 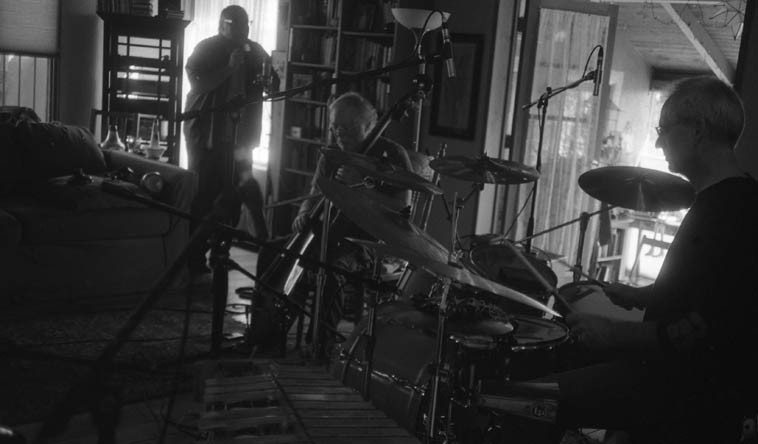 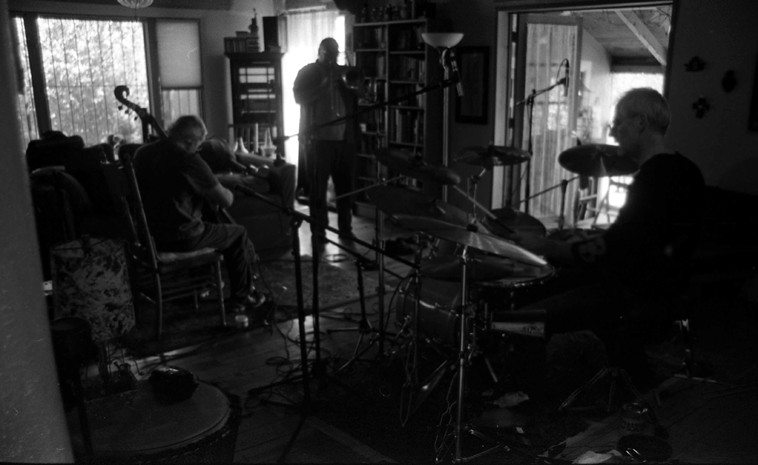 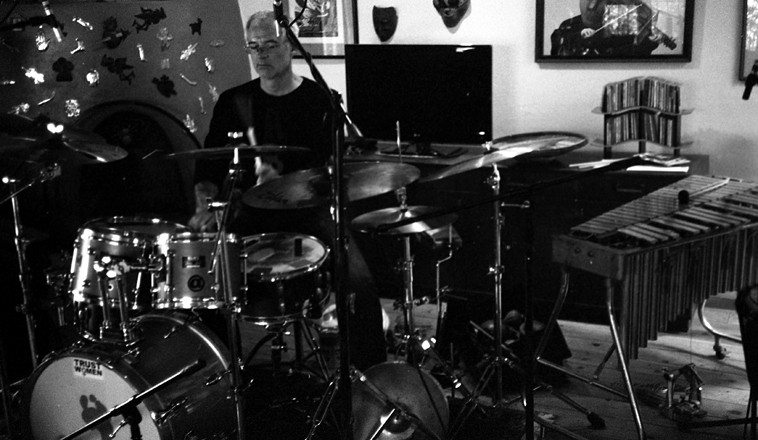 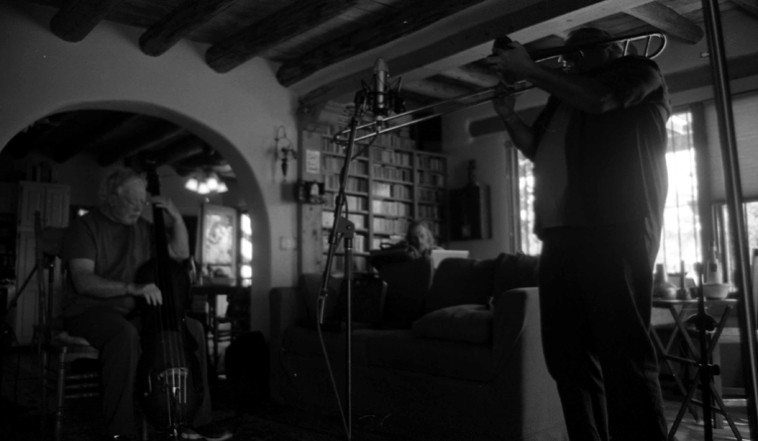 September 22, 2o12 — Steve Schmidt in the corner with his recording rig — photo by Mark Weber 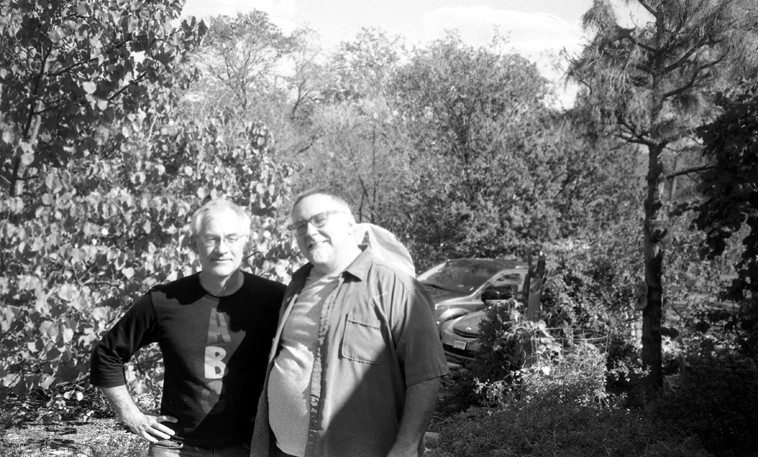 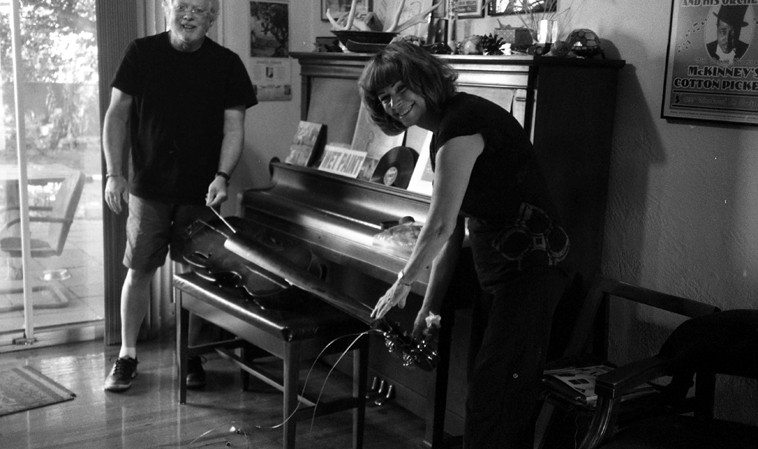 Clyde Reed and his bass technician (wife) Sherrill King assembling the travel bass, an Eminence EUPB (Electric Upright Portable Bass) — Clyde points out that this is not a stick bass, because the Eminence has a hollow body and a sound post — September 20, 2o12 at my place — photo by Mark Weber 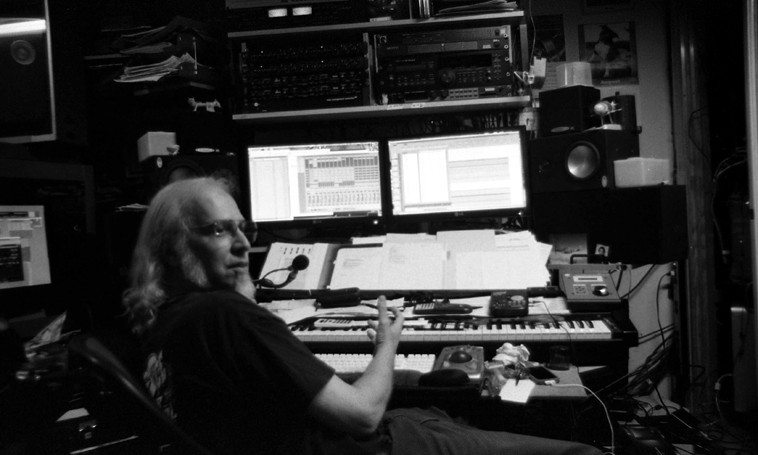 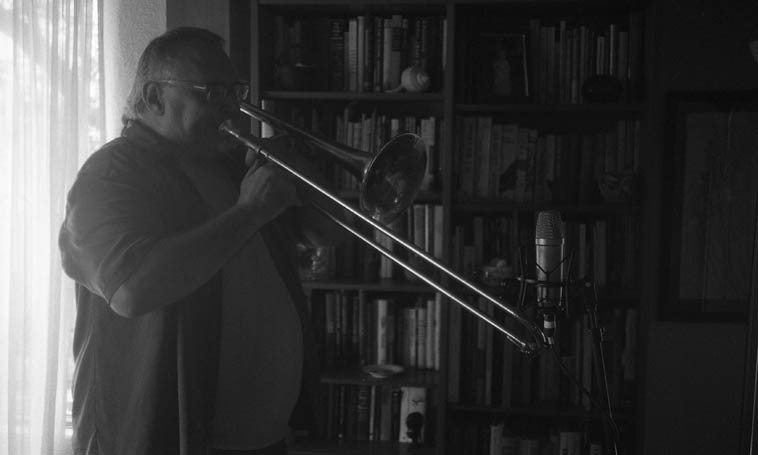 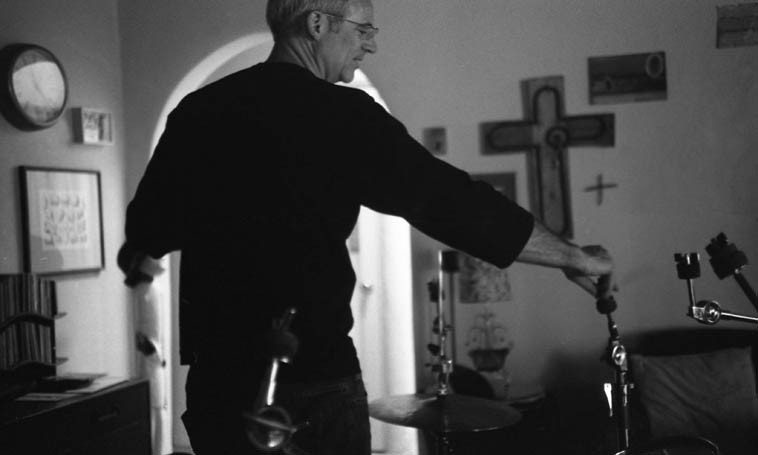 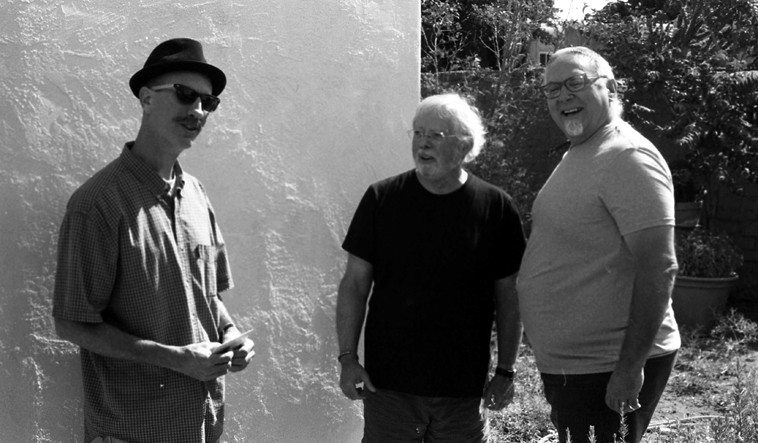 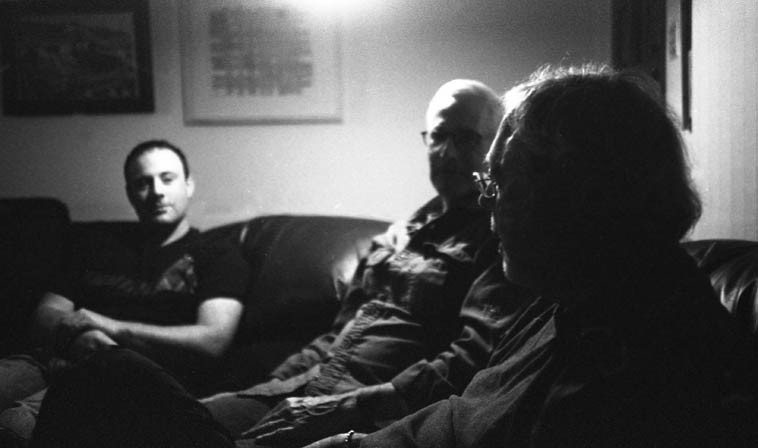 Carson & Rich Halley & Clyde Reed after rehearsal at my place explaining to Michael how he should start using a new designation on his sheet music that says (about ten or twenty bars in): You Are Now Entering Mindfield — late September 22, 2o12 — photo by Mark Weber 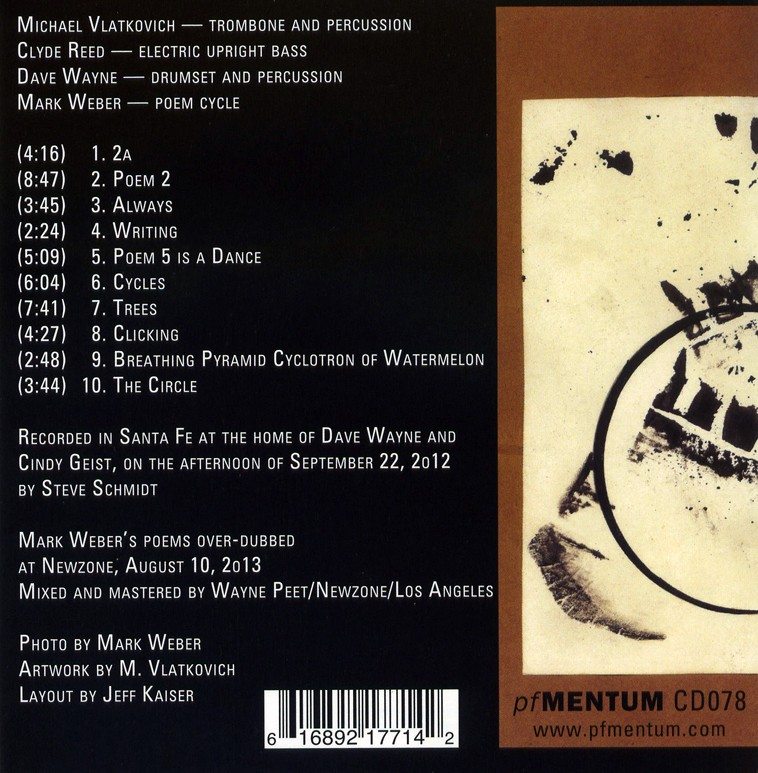