Buddy Bolden probably knew what was coming, what was to follow, after-all, so much is implied in his music, for we can reconstruct backwards what he probably sounded like, the hints are found in his descendants, all part of an on-going tradition, and if it was part of his thoughts at all, he was most likely reassured by the legacy, but then he might not have overly concerned himself with such thoughts, having the purity of the moment more at hand that jazz requires . . .

Today we’ll be talking with cornetist Bobby Bradford about trumpets. It will be a live telephone conversation. Bobby has been the jazz professor at Claremont Colleges since 1974 and has a life-time of insights into jazz and trumpets. 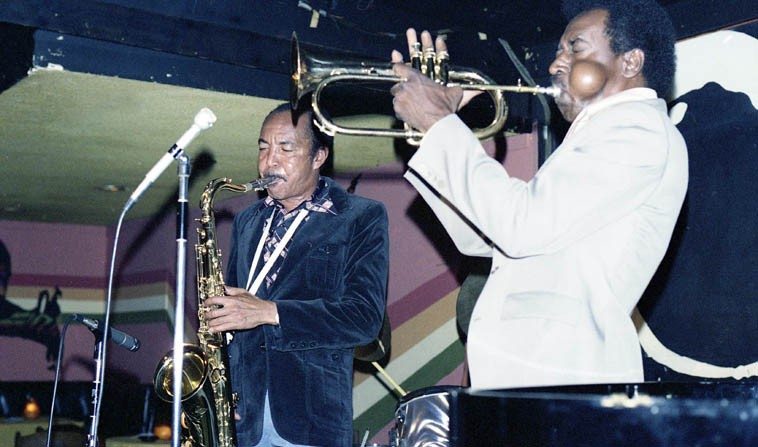 Harold Land & Blue Mitchell — @ Donte’s, North Hollywood — July 10, 1977 — photo by Mark Weber —- Blue Mitchell (1930-1979) was the ultimate hipster with a horn: He had swagger, button-down exactitude, humor, toughness (punch), delicacy (poignancy), and message. And he once bought me a beer! Cancer got him. I followed this band he had with Harold all over L.A. (Blue settled in Los Angeles in 1974.) 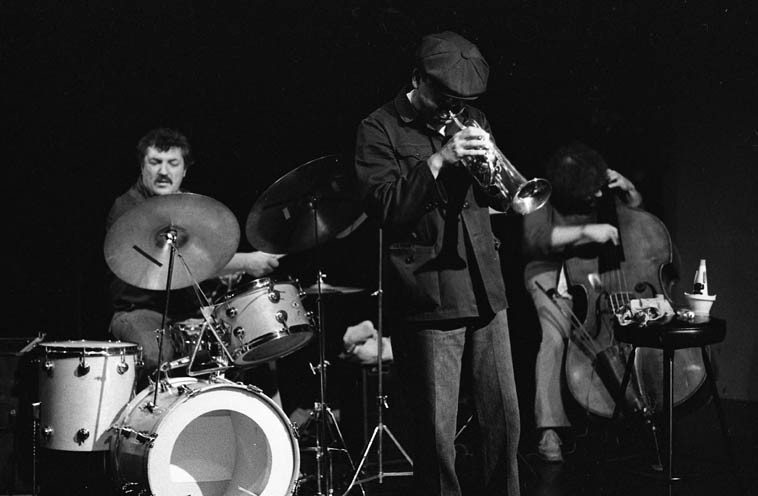 Bobby Bradford is an intellectual with a horn —- He not only sees the big picture, he understands the measure of the big picture —- and ten seconds after you’ve just explained to someone what a lyric long-lined improvisor he is he’ll turn around and make a solo purely out of rhythmic motifs — in other words: He refuses to be categorized: He’s an artist. Photo by Mark Weber @ Century City Playhouse, Los Angeles — October 21, 1979 — Bobby, cornet; Bert Karl, drums; Noah Young, bass: a pared-down version of the Bobby Bradford Mo’tet 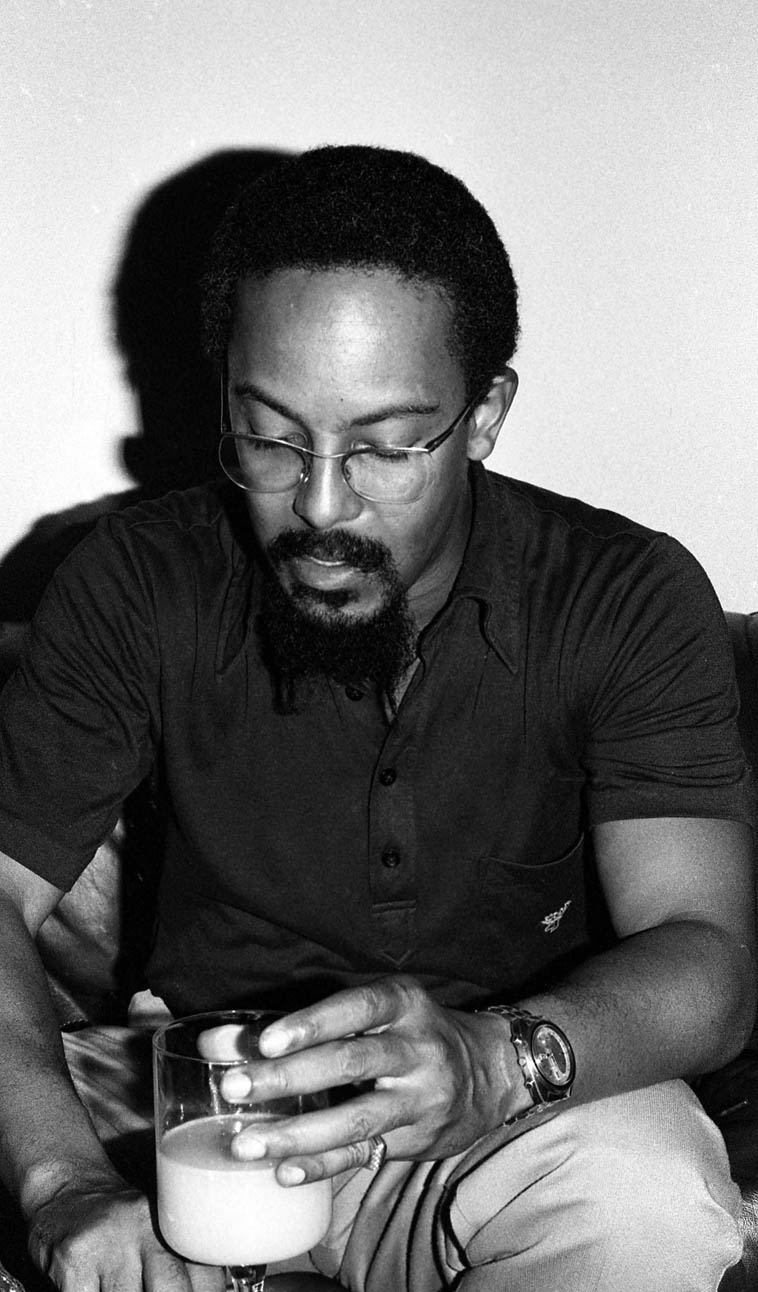 Lester Bowie(1941-1999) —- October 20, 1979 — UCLA — photo by Mark Weber — Lester always claimed to be influenced by Blue Mitchell —- Have you ever heard his rendition of “Hello Dolly”? It’s a remarkable piece, but it doesn’t stand alone, it requires that you know Louis’ version to fully appreciate it’s abstraction and total adoration of Mr Strong (Mr Louis Armstrong) 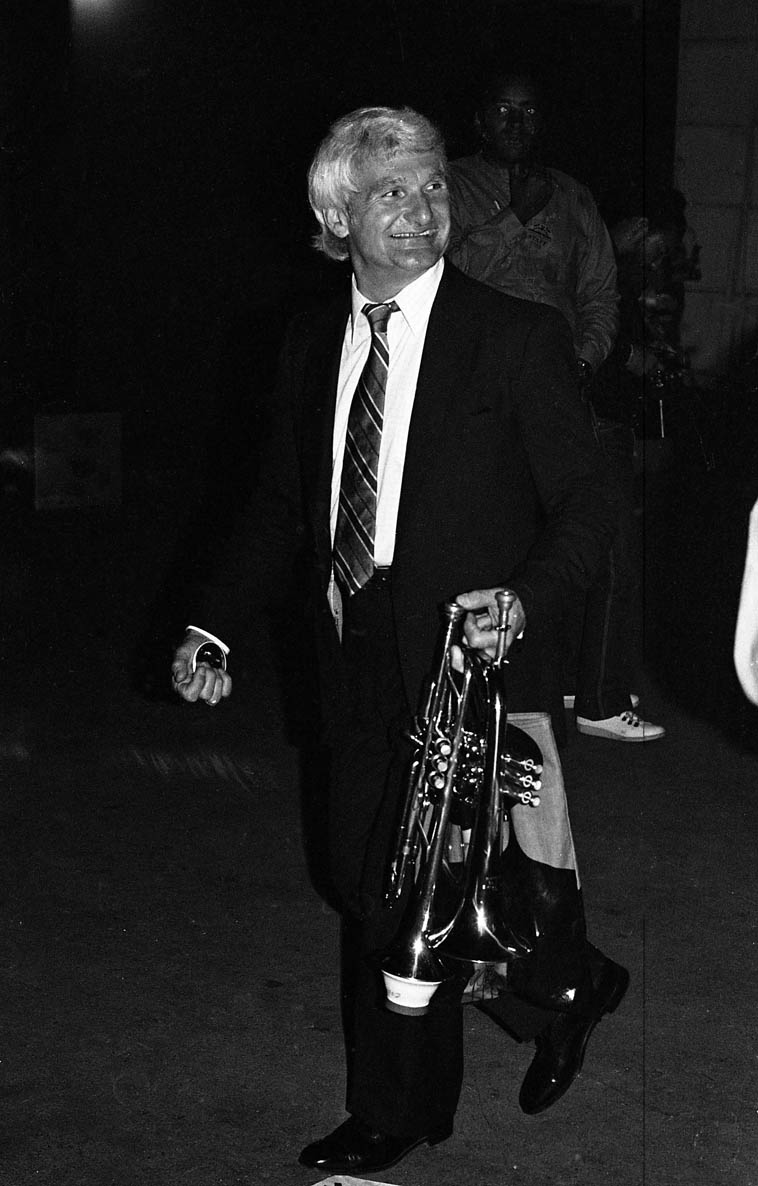 Conte Candoli — June 18, 1983 — Hollywood —- He came out of Indiana like Med Flory, Wes Montgomery, Freddie Hubbard, JJ Johnson, and Hoagy — the message of Bird became his path — through the bands of Woody, Stan, Chubby Jackson, Charlie Ventura, he worked his way toward California where he settled in 1954, where he worked with Med’s big band on Sunset Blvd, and The Lighthouse All Stars, on into soundtracks like Mission:Impossible, TV with Johnny Carson show, TV with Frank Sinatra, around town with Bill Berry’s big band, and duets with his brother Pete, duets with Frank Rosolino, all with a scintillating plethora of runs, comments, blues dips, side-swipes, and purity untouchable. I asked Bobby Shew, who was close with Conte to tell us how to regard this master’s work: “Well, I know his biggest inspiration as a kid was Dizzy but Conte found his own voice very early on in life, a MOST UNUSUAL occurrence. Even tho you could hear some bits and pieces of Dizzys’ licks, he never sounded like Dizzy but always in his own way of expressing. No one played like Conte. He and Clark Terry are the MOST difficult to copy. I could always Count on COUNT. I wrote “COUNTING DOWN” for him. We were “dangerously tight” friends! The first and ONLY trumpet lessons I had were from him in 1959 at the 1st Kenton Summer clinic in Bloomington, IND.” [Email 6aug14] —- photo by Mark Weber 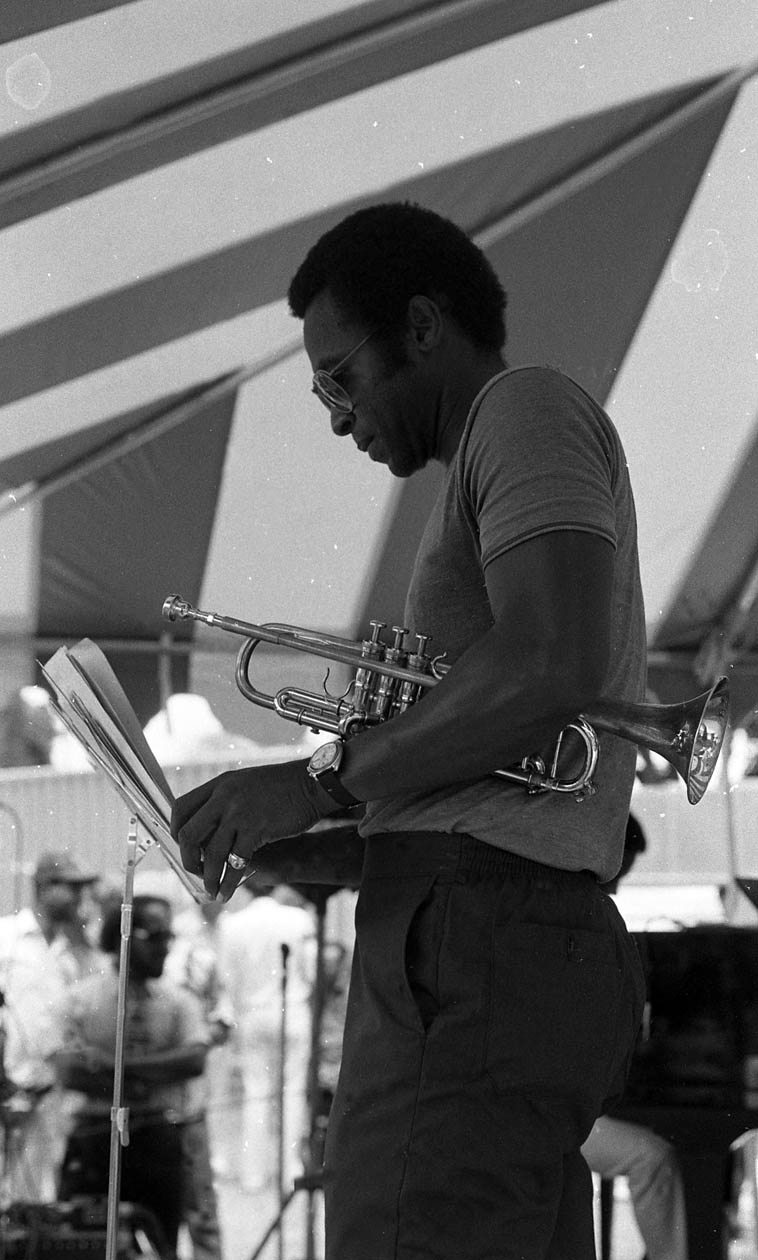 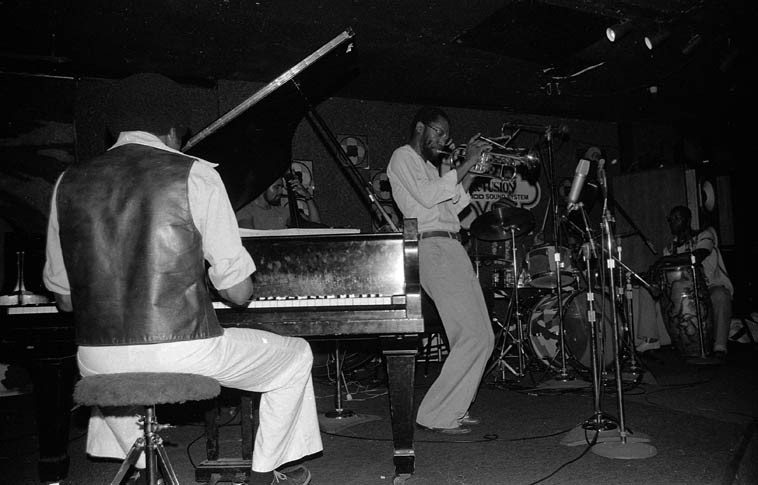 Charles Tolliver Quintet —– May 10, 1981 @ Maiden Voyage, downtown Los Angeles —- Buck Clarke, congas; Sunduza William Henderson, piano; Clifford Barbaro, drums; Tony Dumas, bass —- this evening was recorded for Jazz Alive broadcast, I recall Michael Cuscuna was there (or was that another night?) —- photo by Mark Weber —- I have always loved Tolliver’s tune “On the Nile” and Horace Tapscott kept it in his Pan Afrikan People’s Arkestra book for years —- (this is the William Henderson who recorded with Bradford & John Carter on their 1972 album SECRETS) 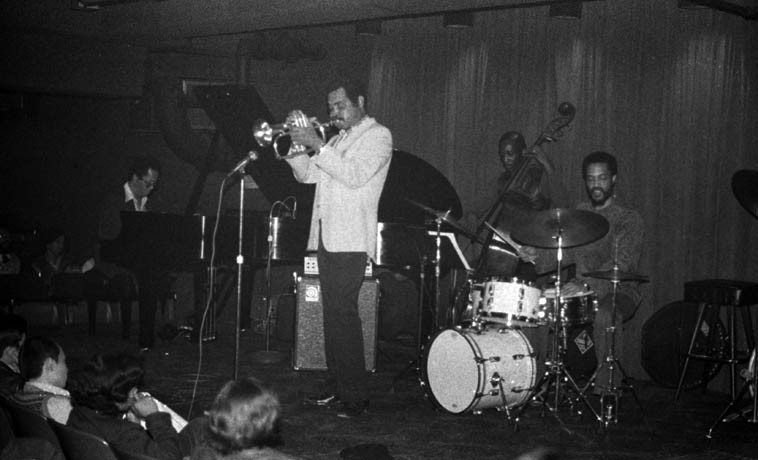 The Art Farmer-Cedar Walton Quartet — @ Howard Rumsey’s Concerts by the Sea — May 5, 1977 — Billy Higgins, drums; Sam Jones, bass —- photo by Mark Weber —- this was a double-bill with Bill Evans Trio (Eliot Zigmund, Eddie Gomez), one wonders how Howard managed the expenses, this was in the days when bands were booked for a week, Tuesday through Sunday —- Note the giant pipes in the wall behind Cedar, I believe those have something to do with keeping the Pacific Ocean from flooding the club, which was dug right into where the sandy beach had been for thousands of years, it was a basement club, you entered from the Redondo Beach Pier down steps into the depths — was a great jazz spot 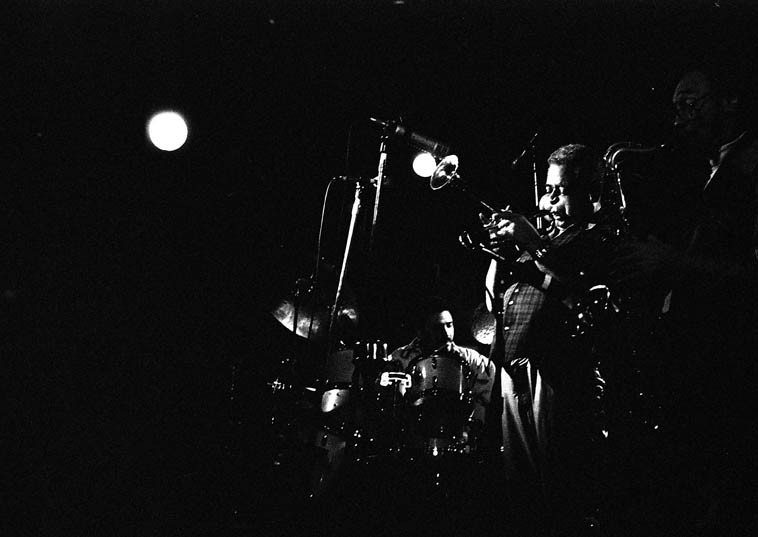 Dizzy Gillespie Quintet —- November 4, 1987 — Cleveland —- Dizzy brought to Peabody’s Down Under on the Cuyahoga River waterfront this quintet comprised of Ignacio Berroa, drums; Ed Cherry, guitar; John Lee, electric bass; AND Sam Rivers on tenor saxophone! I wonder if Sam & Dizzy ever made recordings? The first time I ever saw Dizzy in person (1973) I was twenty and dutifully sat in the front row at Howard Rumsey’s Concerts by the Sea (club in Redondo Beach, California) and looking right up at Dizzy he takes his first solo and his entire face expanded like a puffer fish it scared the bejeezus out of me, I gasped 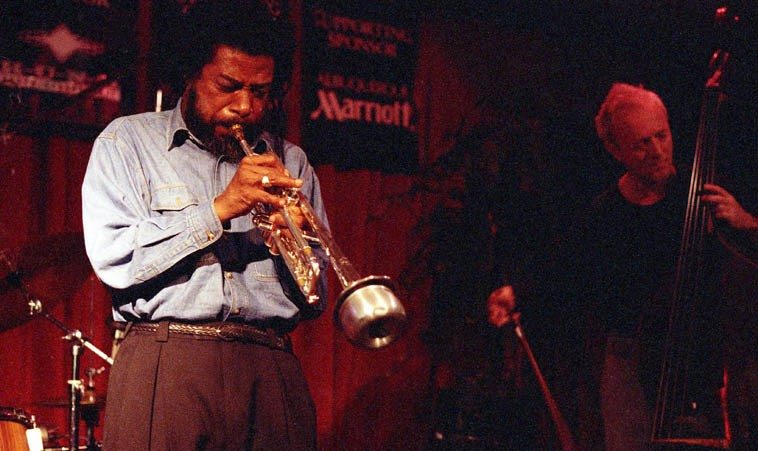 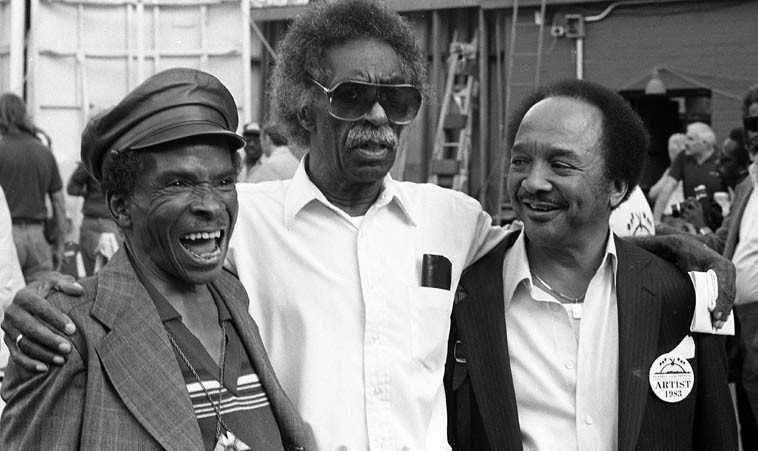 Three Trumpeters: Lammar Wright Jr, Gerald Wilson, Snooky Young — June 18, 1983 — Playboy Jazz Festival, Hollywood Bowl —- photo by Mark Weber —– Lammar relocated to L.A. these last few years of his life to see after his 94-year-old grandmother Nana Mabel Williams — me and my buddy Harold Howard (another trumpeter) had more fun hanging with Lammar, he was a real character right out of Bopdom, told us a million crazy stories, rooming with Charlie Parker, on the road with Dizzy Gillespie’s Big Band, friendship with Dexter, and a lot of drinking — he was running under the pseudonym Lammar Gibran due to some legal entanglement I forgot what, I still have his address in my book: 917 E. 23rd Street, Los Angeles 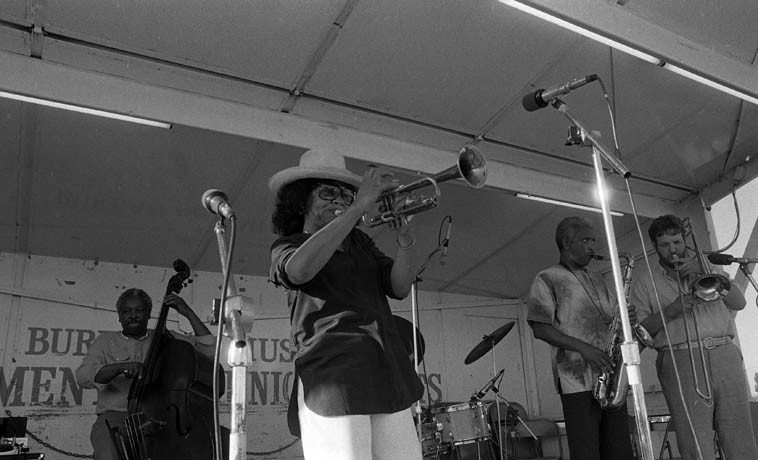 Clora Bryant with the Teddy Edwards Sextet + Ernie Andrews — Watts Towers Jazz Festival — July 5, 1980 —- photo by Mark Weber —- Leroy Vinnegar, bass; Fred Carter, trombone; Teddy Edwards, tenor saxophone; Art Hillary, piano; Clarence Johnston, drums; Clora, is another transplanted Texan to California, she was all over the Central Avenue scene of the 40s & 50s, also played The Lighthouse back then, and w/ Charlie Parker, a graduate of UCLA, and the International Sweethearts of Rhythm, a smoking bop trumpeter who retained much of the swing-era feel in her jump 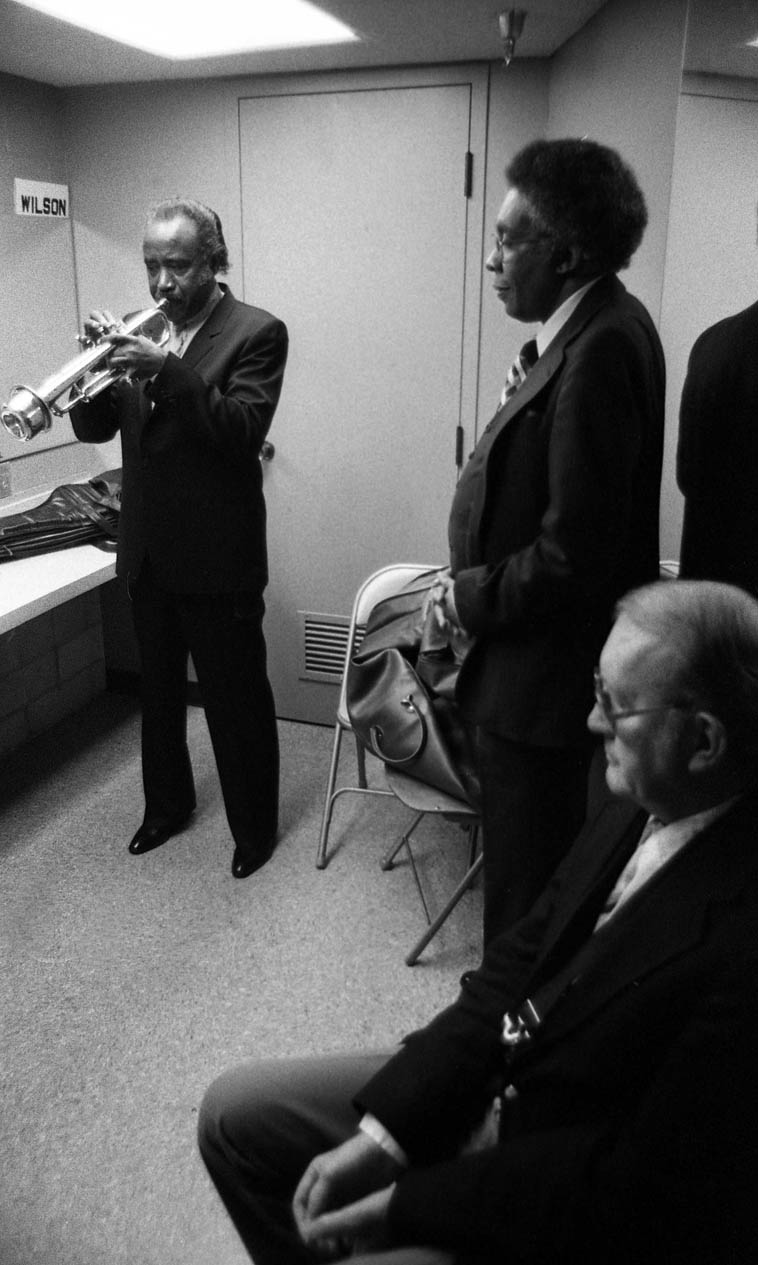 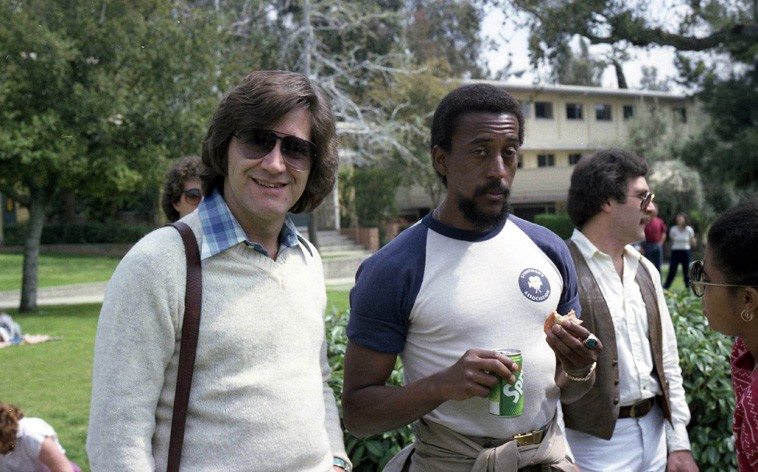 Last time I talked to Shew (last week) he was buying Al Hirt records (vinyl). Apparently Hirt is respected among trumpeters for his technical abilities. (I’ve always thought of him as a guy who played for the tourists on Bourbon Street.) Shew tells how Hirt booked the Buddy Rich band into his Bourbon Street club (what a street!) and one night took over Bobby’s lead chair, so Rich being Rich, called the most difficult 6-page chart and Al Hirt knocked that thing out like it was the morning newspaper over coffee — Shew staggered back to his chair a little weak in the knees. Bobby himself plays with the soul of a poet —- “In Xanadu did Kubla Khan a stately pleasure-dome decree….” —- the old poets who spoke of beauty and tenderness and the majesty of the world. Photo by Mark Weber: Bobby Shew, Roy McCurdy, David Levine — March 28, 1981 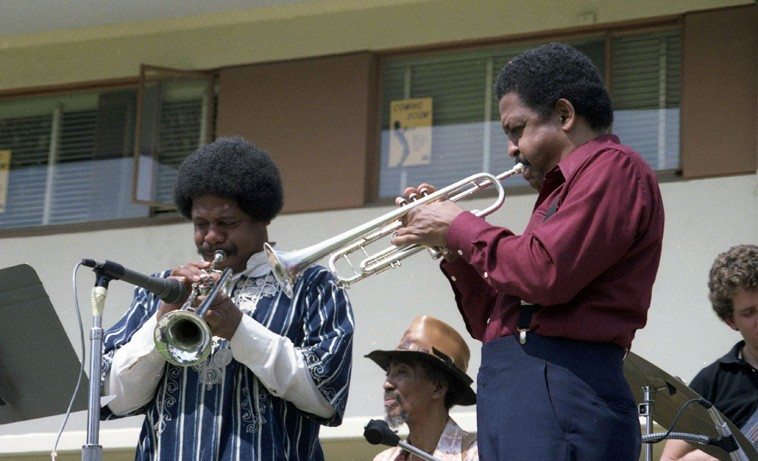