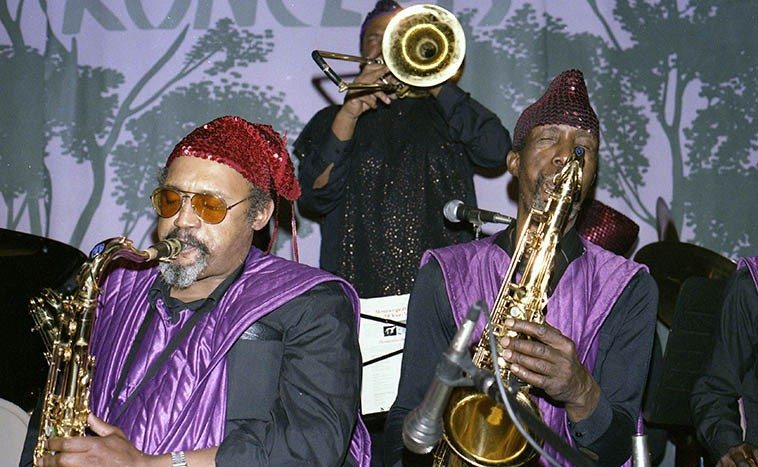 Poem With A Lot of Parenthetical Asides

There are theories as to
where language came from:

One is that around 50,000 years ago
(80,000 on the outside) a certain gene
mutation occurred (maybe God gave it
a little nudge) that set off a cascade of
developmental phases in modern humans (ie. homo
sapiens) associated with abstract thought,
hence: language

The second theory is rather far-fetched
(which is the one I subscribe to, of course)
is that language is a virus that infected humanity
with self-consciousness around 3,000 BC

Now, remember that the first writing was
not in any way corresponding to spoken word —-
most writing (cuneiform — 3500BC) had to do with merchants
keeping tabs in their ledgers

Also, mix in the idea I have been pondering for
years, that Tolkien believed: that the words preceded
the idea (which is opposite of what you’d think) that
the words engendered further abstraction (meaning)
(JRRT was a philologist so he had a vested interest
in such ideas, although, anything he or Owen Barfield
have to say, I’m listening)
That is: a word is given to a complex circumstance,
juncture, contingency, activity, situation, thing,
intention, consolation, speculation, notion, probability,
and this word has a magic
that accrues meaning to itself

As in ritual: it makes visible
what cannot be seen

Which is why Anglo-Saxon is such a slow language:
every word is power-packed, every word is
a world unto itself (even as verbosity had its beginnings
in Anglo-Saxon it wasn’t until Shakespeare that
the blab got going full blast)

Language gave voice to displacement: a mind shift
wherefore humans could talk about the future
or the past

It was Julian Jaynes in 1976 (I didn’t read the book till 1981)
that first put the idea of something happened with language
like a virus at 3,000 BC)(I recommend you skip his notorious
book THE ORIGIN OF CONSCIOUSNESS IN THE BREAKDOWN
OF THE BICAMERAL MIND because it’s kinda windy, whereas
the Wikipedia citation is quite concise)

SO.
This brings us to signaling, which is a concept I have
only recently become acquainted with and am still
endeavoring to wrap my brain around,
in that,
everything has to have a reason, right?
If not for immediacy, then only to be entered into
the Natural Selection sweepstakes —-
the word “signaling” has been chosen
to describe what might be the impulse
behind that which became writing —-

imagine: each symbol is a story unto itself
then one day you put two symbols together . . . .

mix in another 30,000 years
and bing bang boom
you have the earliest written language
that corresponds with speech: which only
came into being around 3,000 BC

Yesterday on a walk pondering origin of words it occurred to me
how eventually the mind goes blank with old age and everything
is erased . . . . . . . . 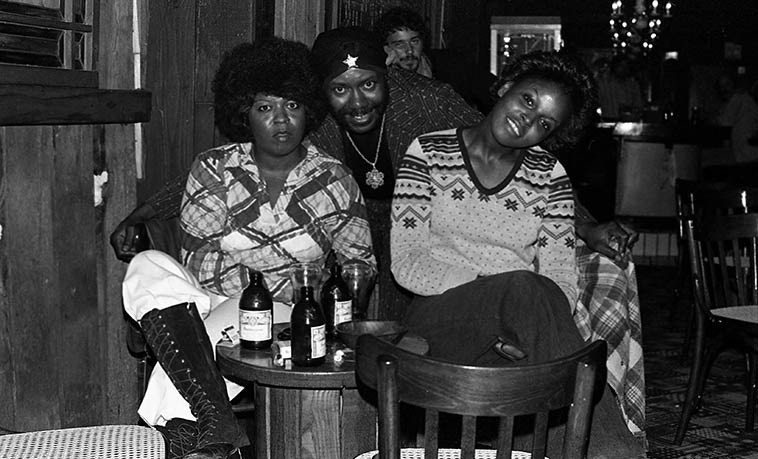 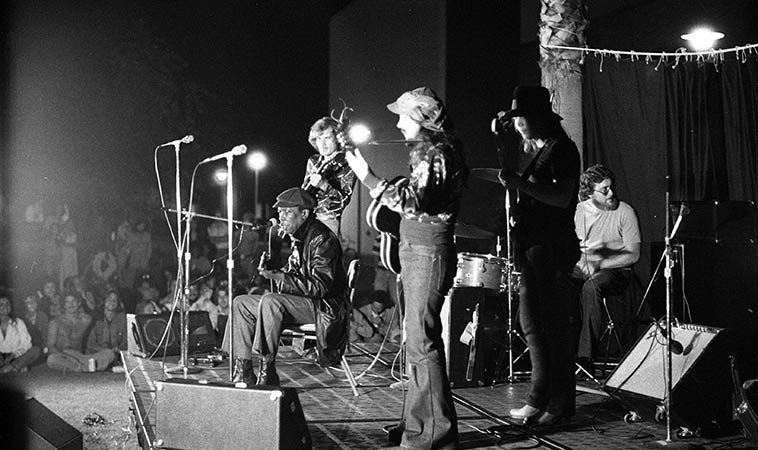 John Lee Hooker — July 7, 1976 California State University Fullerton — w/ Ron Thompson (hat) on guitar and I didn’t catch the names of the others but doesn’t that bass player look like Tommy Shannon? — photo by Mark Weber 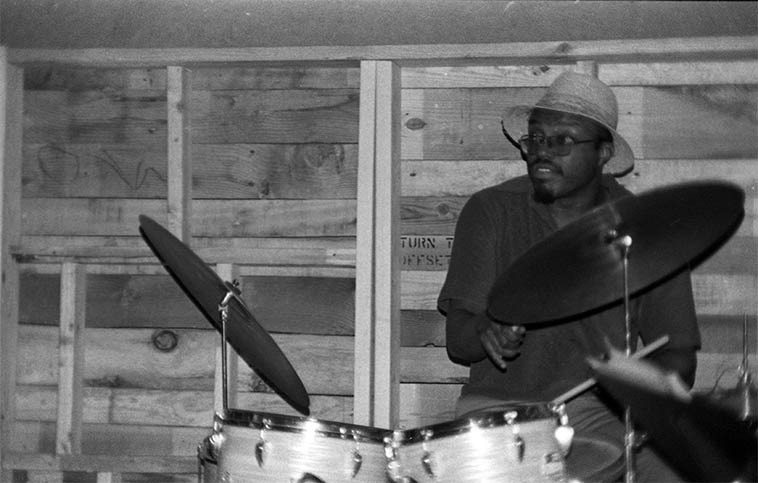 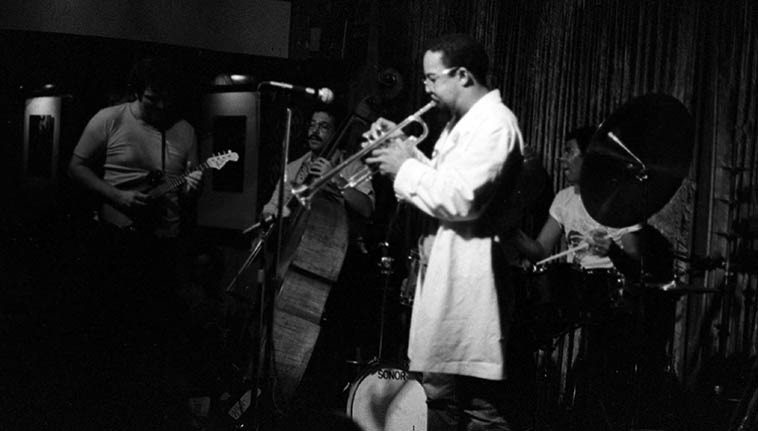 Jack DeJohnette’s New Directions at The Lighthouse, Hermosa Beach, California — September 29, 1978 — John Abercrombie, mandolin-guitar; Lester Bowie, trumpet; Jack DeJohnette, drums & piano; Eddie Gomez, bass — photo by Mark Weber —- We’ll listen to some of 39 STEPS by the same John Abercrombie Quartet that just played Albuquerque at the Outpost and laid down some of the real stuff: jazz of such beauty and effortless guileless simple honesty you wish the whole world could be like that always . . . . 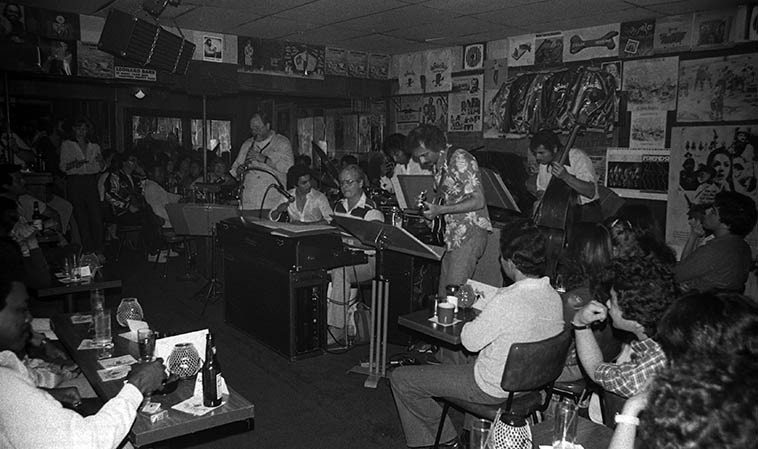 Clare Fischer Salsa Picante: Gray Foster, soprano saxophone; Roland Vasquez, drums; Hector Andrade, conga; John Chiodini, guitar; Oscar Meza, bass, Clare Fischer, keyboards — at The Baked Potato, North Hollywood — June 8, 1980 — photo by Mark Weber —- the other day I got caught up in the sheer gorgeous beauty of Clare’s album ON A TURQUOISE CLOUD (2oo1) with his Clarinet Choir (9 clarinets with rhythm section and a couple brass and our old friend Cip on bass-clarinet! And always Gary Foster on saxophone interludes and clarinets) — We’ll listen to the title track today, a 1947 composition by Duke Ellington, as well, listen to other versions of “On A Turquoise Cloud” by Jimmy Jones, Dick Hyman, Duke Ellington Orchestra, and Scott Robinson. 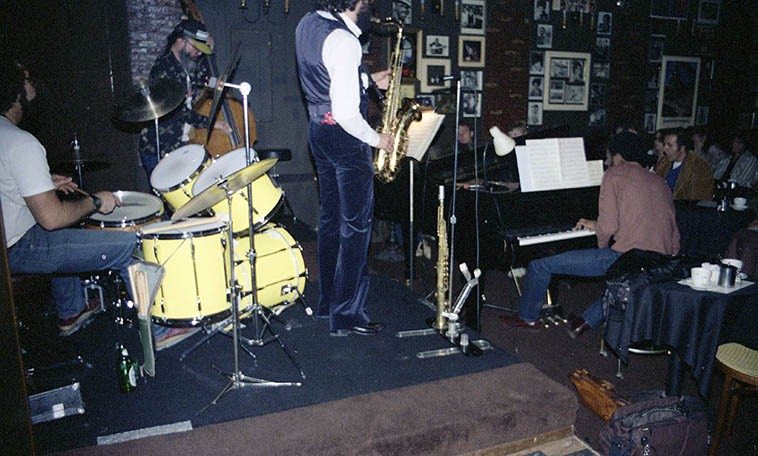 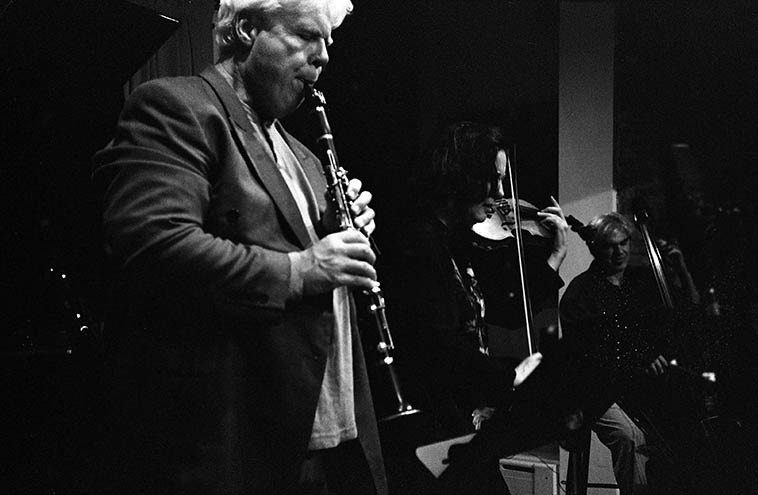 Bill Payne, Eb clarinet; Eva Lindal, violin; Ken Filiano, bass & EFX; Carol Liebowitz, piano —- in concert in celebration of their long-awaited first CD called BILL PAYNE, EVA LINDAL, CAROL LIEBOWITZ — this trio formed in 2o10 on the premise of freely improvised spontaneous music in the moment — Ken is a frequent guest with the trio, and I was even asked to join in on this performance reading a few poems (see this concert on YouTube soon) —-Live at Scholes Street Studio, Brooklyn — May 8, 2o15 — photo by Mark Weber 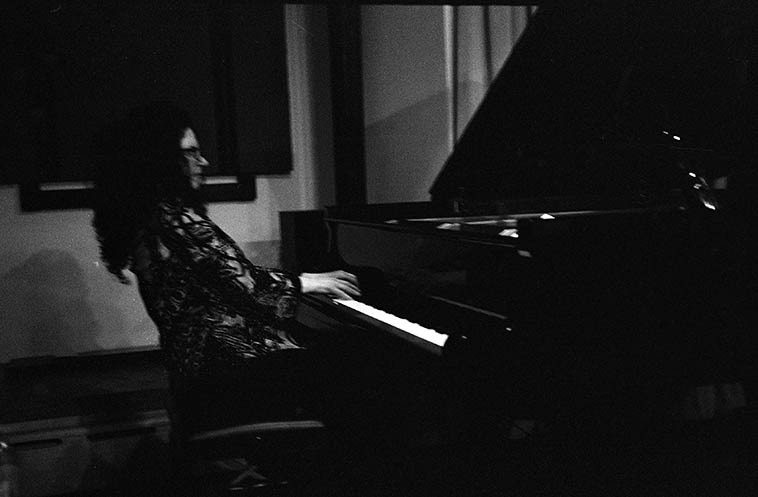 One of my favorite pianists: Carol Liebowitz with the trio + guests — May 8, 2o15 Brooklyn — photo by Mark Weber 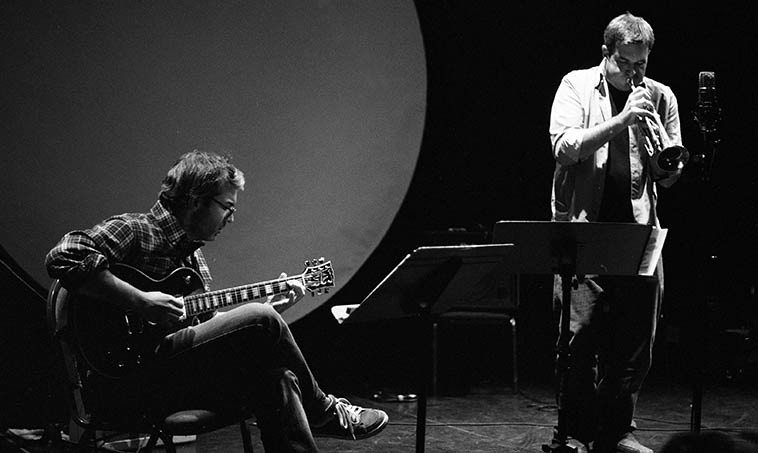 Tinbag: Mike Baggetta, guitar, and Kris Tiner, trumpet — UNM Arts Lab, Albuququerque — November 10, 2o12 — photo by Mark Weber —- MORE chamber music! Exquisite music just flows from these serious cats, flows like the skies & rivers —- Mike lives in Brooklyn and Kris in Bakersfield and they get together once a year and run around the country, ever since, at least 2006, because they were on my radio show that July, AND they’re coming back to Albuquerque this coming September 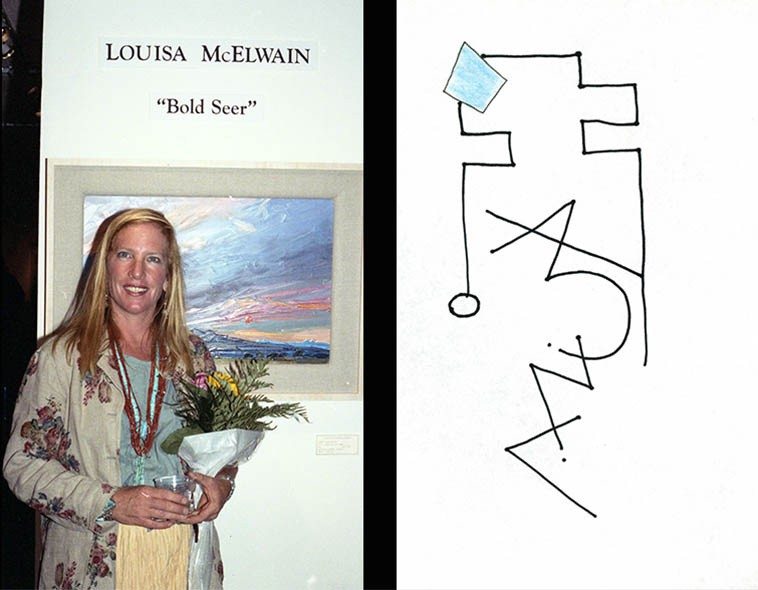 Shakes you down to the core when a fellow human being takes their own life —- We have framed prints of Louisa McElwain’s paintings all over the house — She was born the same year as me (1953) and you always feel a connection to somewhat who’s traveled the same distance — photo by Mark Weber — Santa Fe — July 12, 1996 Santa Fe — what a great painter of New Mexico landscapes —— line drawing by Mark Weber “Louisa McElwain”

Life catches up with us
the entire planet enveloped in life
a spirit, a force, continuance
we each carry life along in the stream
as it flows on through us and around us —-
mourning doves this morning in Taos
when I found out 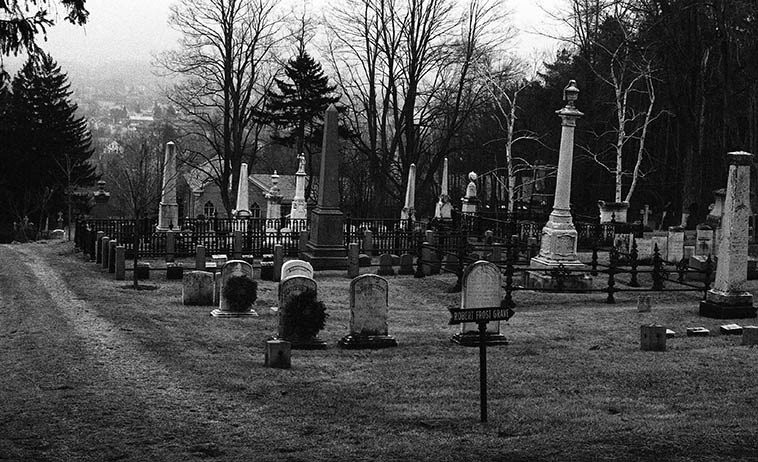