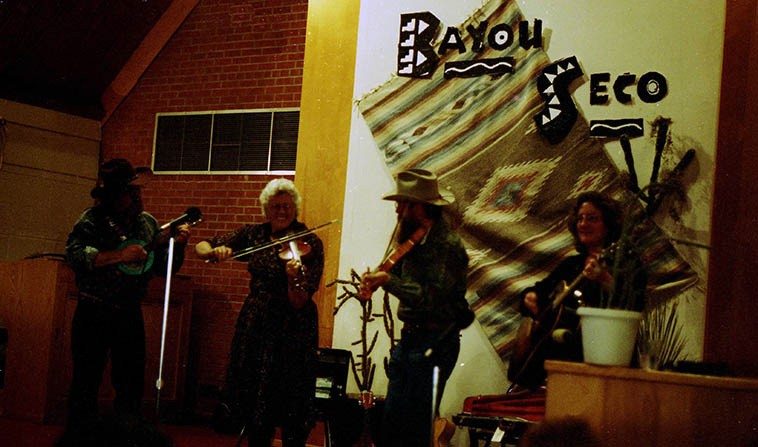 Bayou Seco —- I don’t remember where this was, a dance hall somewhere — date: February 15, 1998 w/ Scott Mathis, mandolin, and Linda Askew, guitar —- photo by Mark Weber —— One day Ken saw my old Nonesuch Explorer Lp THE IRISH PIPES OF FINBAR FUREY (1972) which is an album that sounds like it stepped out of the Mabinogion or Beowulf and turns out Ken is friends with Finbar, my mouth fell open, this record is so mythical to me I didn’t know you could actually meet someone like Finbar Furey (my late friend Ken Barreras turned me onto Finbar)

The name Bayou Seco reflects the fact that they had recently come from Louisiana and found themselves in this arid dry land ye shall know as New Mexico water’d by hail storms and acequias (ie. ditches) and the ghostly arroyo murmurs of La Llorona who sprinkles the Rio Grande —-

A ditch is a small canal, similar to a bayou but smaller. Seco is Spanish for dry, dry as you can get —-

Jeanie comes out of the east coast “great folk scare of the early 60s” Cambridge Club 47 coffee shops that spawned Jim Kweskin Jug Band, Tim Hardin, Mimi & Joan, Buffy Sainte-Marie, Odetta, Rick Von Schmidt, Pete Seeger never not too far away, New Lost City Ramblers, she knew the Muldaurs when they were still a couple, stories of beach parties on the Cape: bongos, jugs of wine, guitars, bonfires, innocence in those freewheeling days before a hard rain gonna fall, more like Mr Tambourine Man, Pack up your sorrows, Sweet Sir Galahad, Barbara Allen, hootenannies, dandelions & peanut butter & jelly sandwiches — Newport Folk & Jazz festivals every summer — (I wonder if she ever caught Fred Neil, I loved his music) — tales of traveling across southern France with Paul Simon playing in little petit cafes “Un lieu très agréable, sans prétention, où on mange (et boit) bien! Un rapport qualité prix au rendez-vous” (they were not a couple, Paul had a little sports car) —- She is also the author of one of the first grow your own vegetables organic gardening  cookbooks called GROW YOUR OWN sold something like 300,000 copies —-

Meanwhile, Ken grew up in East L.A. (hereinafter known as “East Los”) in a large family of crazy brothers, cholos, vatos, lowriders, junkies, he seems to have been the only sane one of the bunch until he had a vision in gym class of the iron cross and got shipped off to Vietnam where he got a face full of agent orange (which has been playing havoc with his health lately) — After coming home from that disaster of a war he spent a few years hitch-hiking around the Appalachians through the hills and hollows following the sound of mandolins and banjos collecting folk songs and obscurity and oral histories on front porches with old guys like Tommy Jarrell and even Bill Monroe for a minute, eventually winding up as a street preacher in Santa Cruz (or, was it San Jose?) hollaring imprecations about “That Black Train to Perdition” preachment of the fell world of alcohol —– This is when Jeanie first laid eyes on Ken and she crossed the street, didn’t need no fire & brimstone —-

However, they did get together when Ken threw down the challenge that he was going to Eunice, Louisiana, for a barbecue with the Balfa family and was she game? Stayed there awhile and learned from Dennis McGee, Canray Fontenot, Jax Beer, and were early members of Beausoleil but the money was funny, anyway the doctors told Jeanie to get some less swampy air in her lungs so they crossed the saharan expanse of Texas to Santa Fe (1980) and from there to Albuquerque (18 years)—-

They must know 14,643 songs — first they learned all the Carter Family songs, and Jimmie Rodgers, then all the Harry Smith Anthology songs, then everything at Cecil Sharpe House, then all the Child Ballads, then a gang of Cajun two-steps & horsedrags, then all the songs of the Northern New Mexico villages, then the Tohono O’odham Arizona Indian songs, and a couple Navajo rain dances and a few Civil War rebel yells & war whoops thrown in for good measure and nowadays they live in a house they built themselves on Fiddle Hill in Silver City (hereinafter known as “Silver” as we say in New Mexico) tour all over Europe and the British Isles (mostly France because Jeanie can speak French, and Germany because Ken picked up that tongue somewhere, and England because they are naturals to that language and Bob’s your uncle) —– No mere folk archeologists, Bayou Seco is about a living music and tradition and are dear friends of mine (my record label Zerx has released half dozen of their CDs)(they even let me play triangle in their band sometimes) —

So much more of the legend of Bayou Seco has not found itself into the histories, those big books on the true Southwest music culture fractured by time or time’s ghost or even the sticky armature of a button accordion, noisy beasts they are, Ken travels always with a vial of red powder in his vest, chilie dust he sprinkles on his eggs & waffles & rubs it on Jeanie’s violin strings when she’s not looking pretending to set up the P.A. system, he told me once he played in a heavy metal punk band in Germany and he’d do the buck & wing while the guitarist was shredding while the beer maidens brought platters of suds —- So, I’m sure Ken will straighten me out on this history when they get back from Yurp, and when they do, make sure and check out their radio show every Saturday morning from Silver on KURU where they look into their vast archives of folk musics of the world. 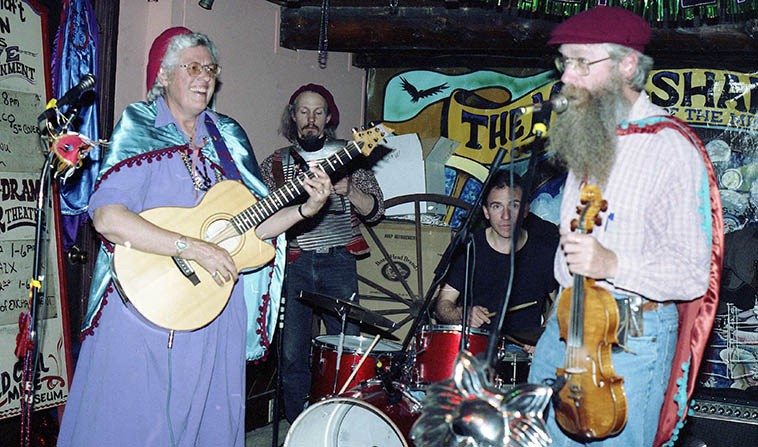 Bayou Seco at the Mindshaft Tavern, Madrid, New Mexico, for Mardi Gras — February 20, 1998 —- Jefferson Voorhees and his brother Steven visiting from Vermont on drums & rub board — photo by Mark Weber 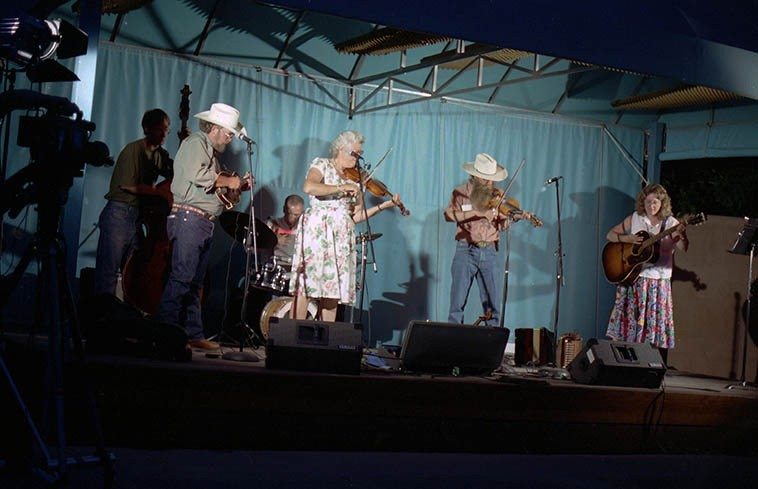 Bayou Seco at the Albuquerque Museum — June 13, 1996 — Terry Bluhm, bass, Jefferson Voorhees, drums; Scott Mathis, mandolin; Linda Askew, guitar; Ken & Jeanie . . . . . photo by Mark Weber —- Jeanie is one of the few singers that could get by without a microphone in a pinch, I’m not saying she’s loud or a yeller, I’m saying she has a naturally resonant voice that can fill a room with her smokey burnished vocal cords 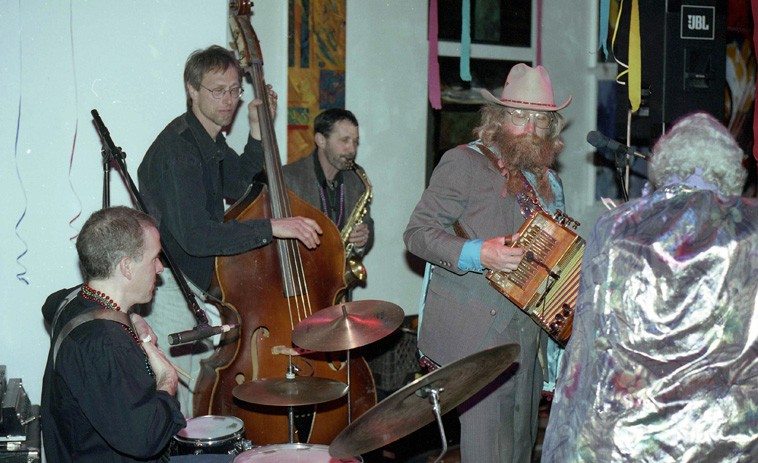 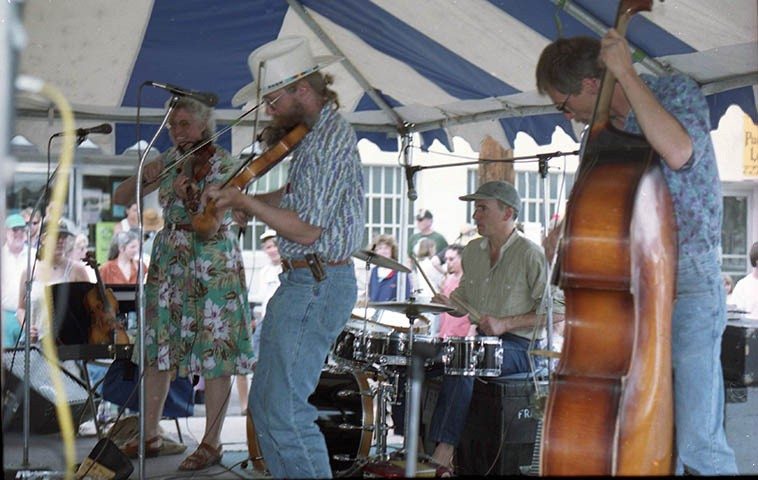 Ken & Jeanie do this thing with the twin fiddles where they play just a microtone apart and it sets up a tension and gravitas that sets your hair aflame, first time I took Dino (J.A. Deane) to hear them, Dino was shook up, “Man, they are on fire, just burning!” —- photo by Mark Weber — April 20, 1997 at Nob Hill Coop Spring Festival, Albuquerque (produced by Robin Seydel) — Terry Bluhm, bass; Jefferson Voorhees, drumset 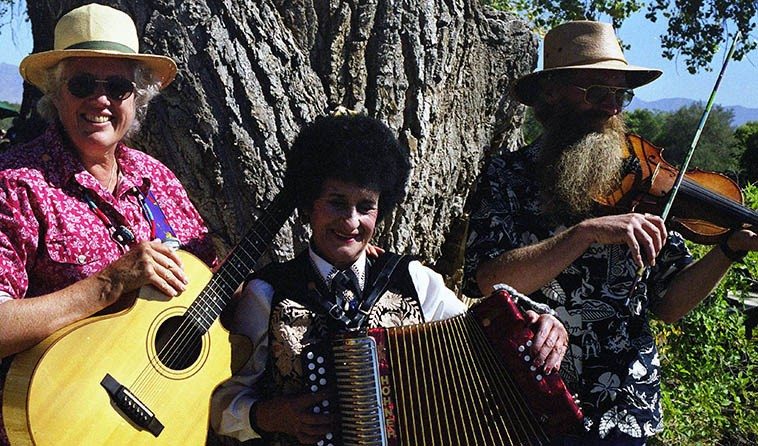 Ken & Jeanie w/ Antonia Apodaca who hails from the pre-war days of dance hall bands of the Northern New Mexico mountain villages of the Sangre de Cristos, and she plays a jumping guitar, too —- Harvest Festival at the Maze Corn Field — October 9, 1999 — photo by Mark Weber 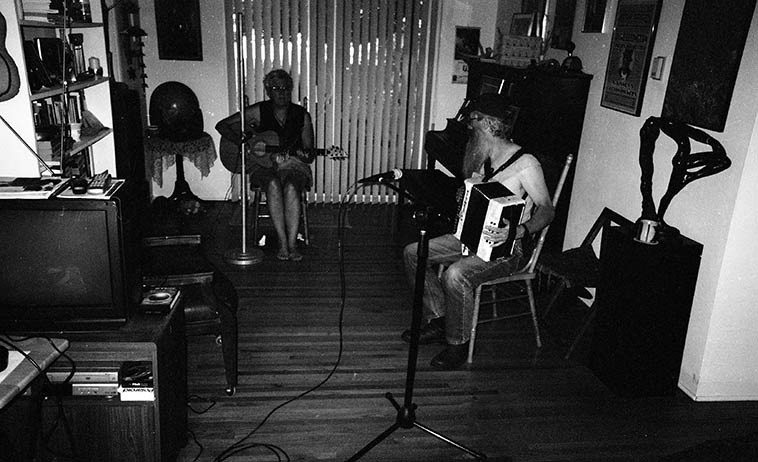 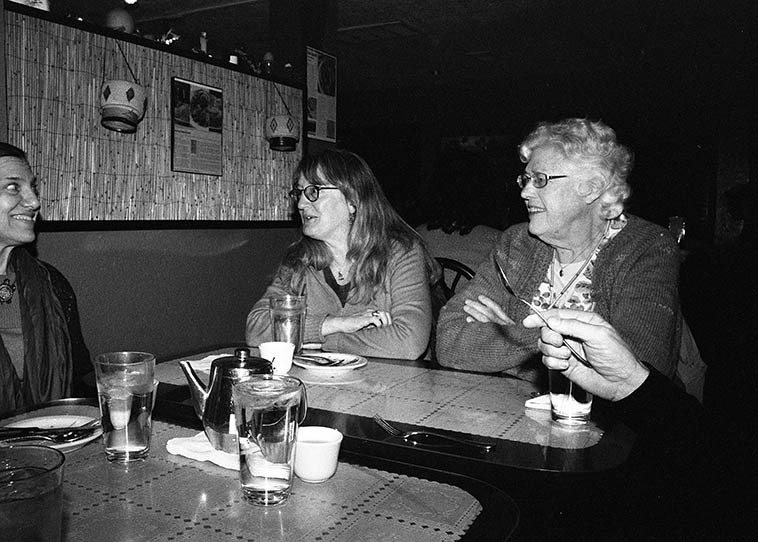 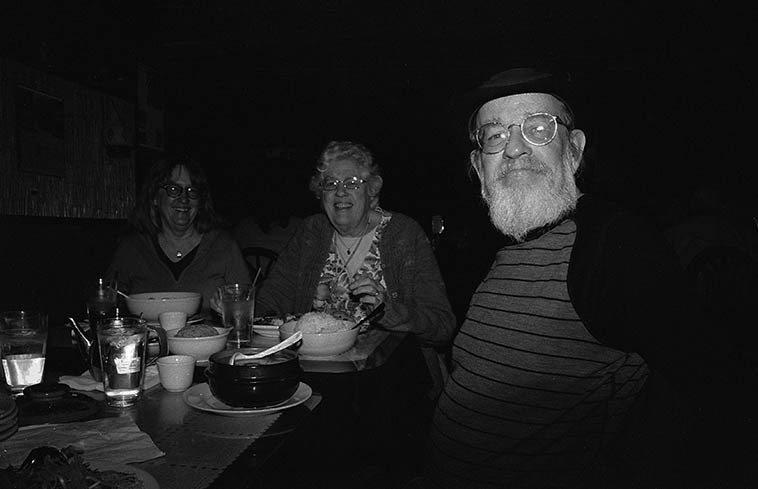 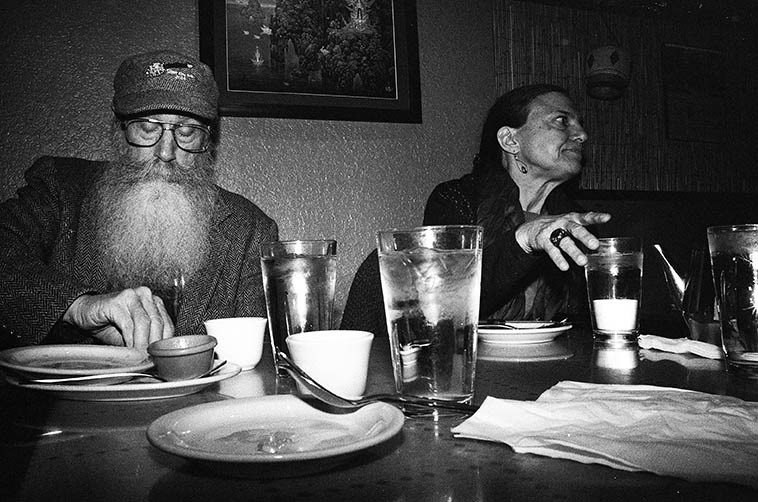 Ken Keppeler picking up the last of his goober dust with his eyes closed —- & Janet probably talking local politics — dinner February 28, 2o15 — photo by Mark Weber —- Ken’s an excellent cook himself, just don’t mention garlic around him, he’ll chase you out of his kitchen with a frying pan, he dislikes the garlic serious 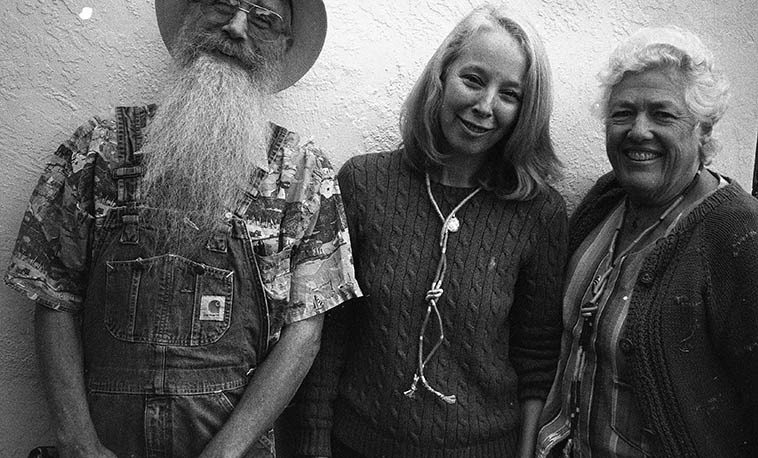 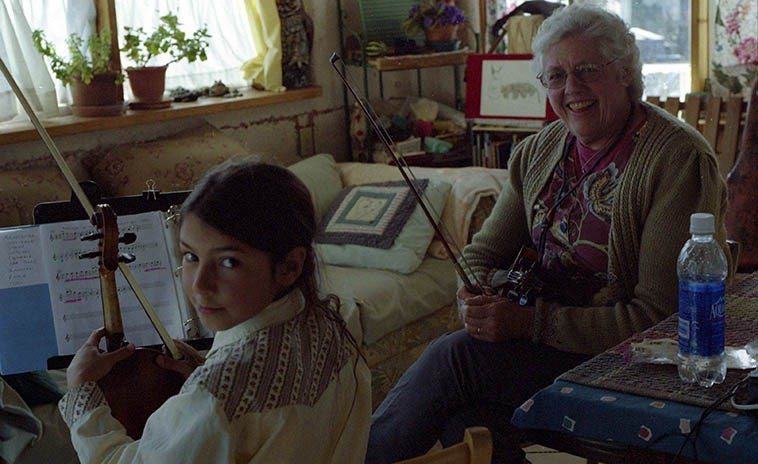 Sadness in this photo: That young child was on her way to becoming the world’s greatest jazz violinist when she was killed in a small prop plane accident (May 23, 2o14) All of Silver City mourned — Ella Jaz Kirk with her teacher Jeanie McLerie at Fiddle Hill — February 5, 2oo8 — photo by Mark Weber 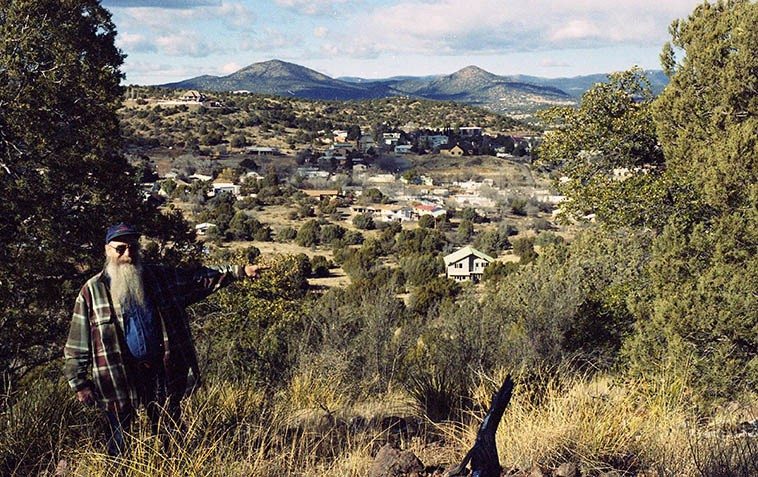 Ken Keppeler on Boston Hill pointing to their home (the 2-story) with the hamlet of Silver City, New Mexico in the surrounding valley — February 5, 2008 — photo by Mark Weber —– We don’t get down to their place too often, it’s 5 hours south of Albuquerque but when we do it’s evenings out doors around a fire while musicians from all the surrounding hills and backwaters play the old songs . . . . . 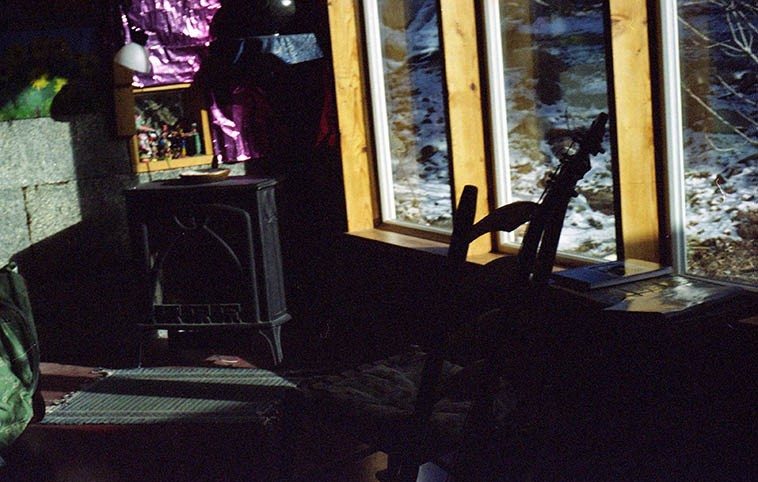 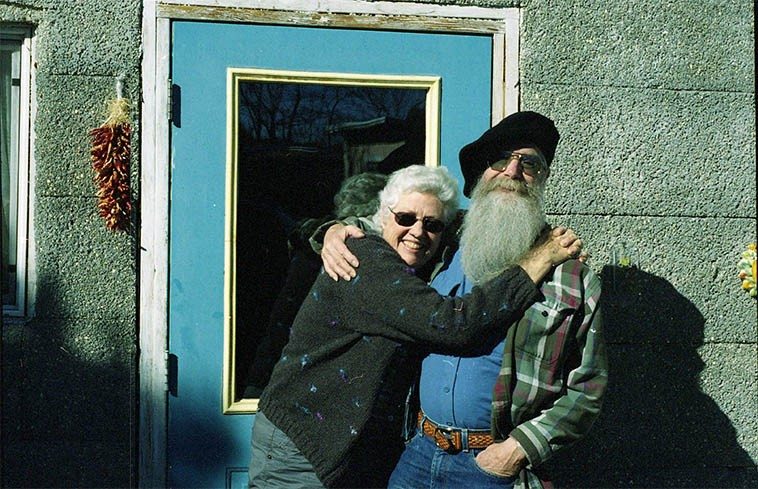 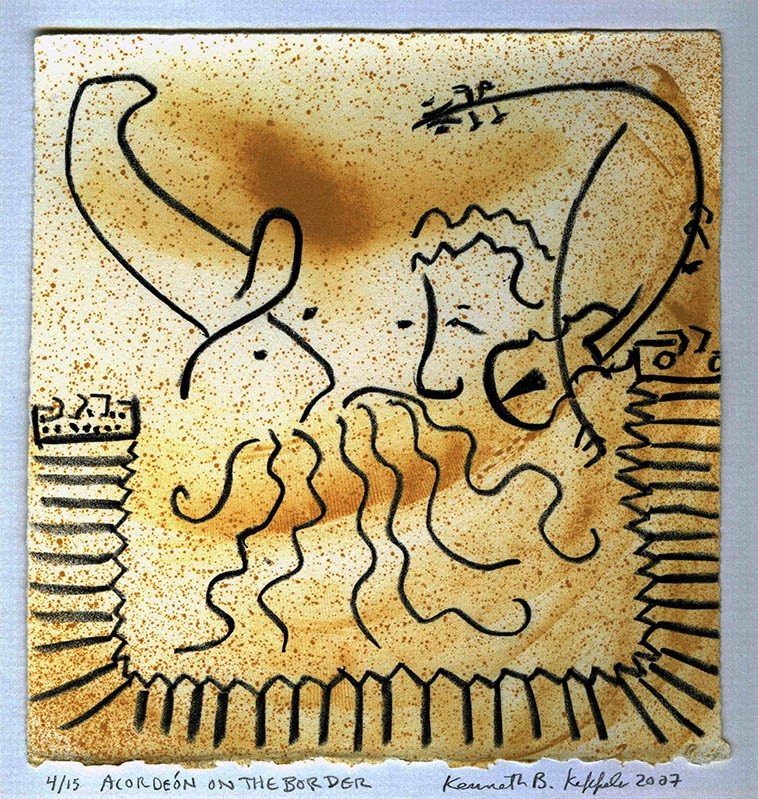 Original art by Ken Keppeler in the collection of Mark Weber 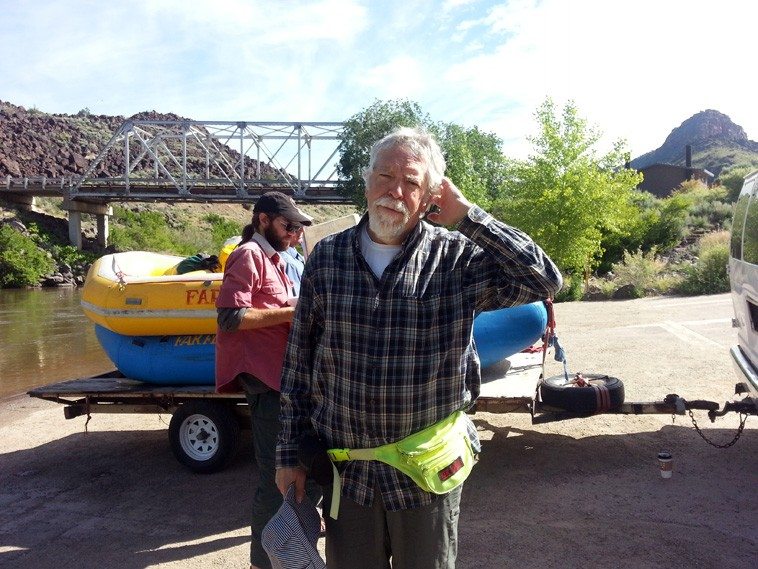 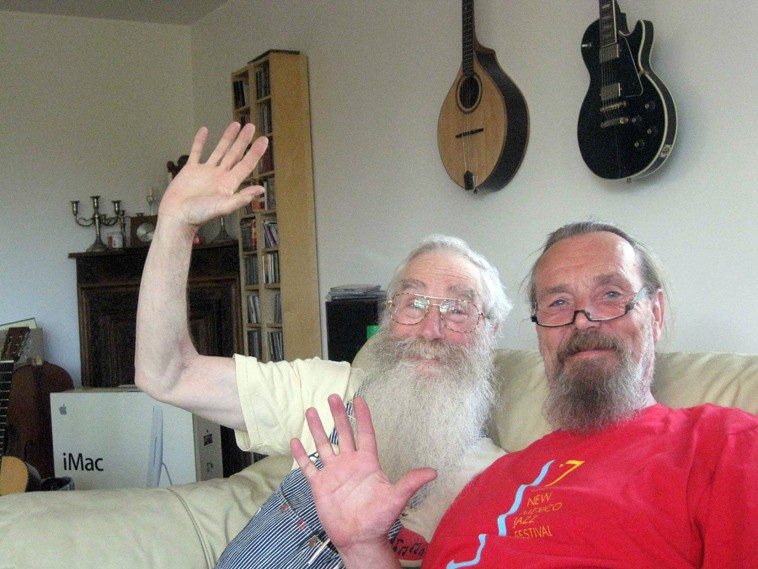 Hi – Klaus and Christine came over to where we are staying (20 min away) last night. We had zucchini enchiladas. beans and rice. And our host made a deliicious Breton Far – prunes in a rich custard. It was a fine time. See you when we return. Cheers – Jeanie & Ken (23 of June 2015, Queniquen / Guerande, Bretagne, France) — Photo by Jeanie McLerie