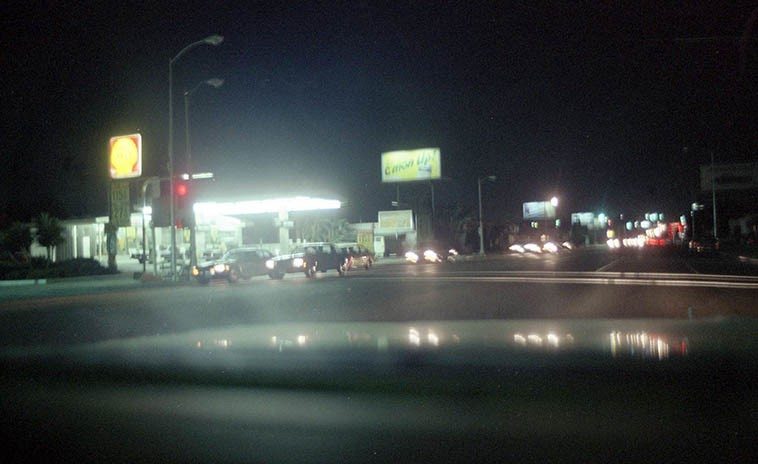 Who was that 20th century French
……………….philosopher who
said we now live in
a culture of the spectacle?
Some time ago someone gave me
…………..a book he wrote, maybe
the only book he wrote, before
he committed suicide —- (If I am ever overcome by
some debilitating
terminal disease I’m not sticking around, either) —-
But, his idea(s) stuck with me as
……………………………..worth considering:

I can never figure out how to promote this music
that means so much to me, even as
I know it’s not for everyone . . . .
It is
something vital and untamed, reaches back
way back in time

As we watched the moon eclipse a few nights ago
I wonder’d about
……………..the Akkadian priestess poet Enheduanna
who worshipped the moon god Nanna-Su’en
She who saw the splendor and majesty and
…………reverence in all things Earthly and beyond

Nowadays, as this philosopher has it, we
………have spectacles instead, novelties, detached from
…………….our humanity and nature 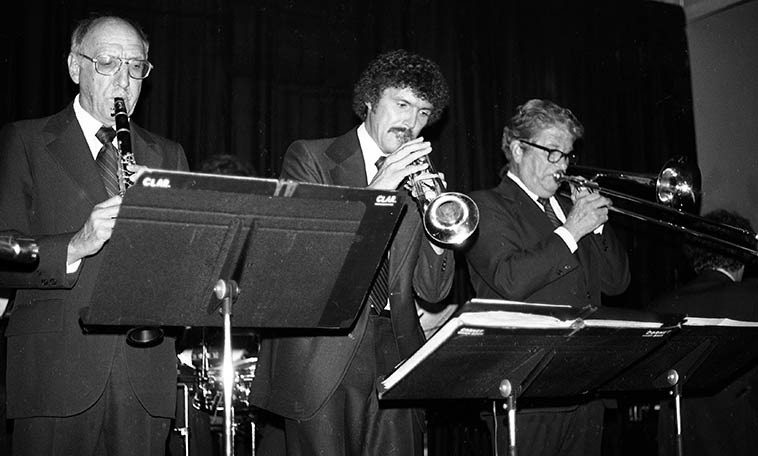 Turk Murphy Ragtime Jazz Band — August 17, 1979 — I was so broke that summer we lived in San Francisco I never could afford to visit Earthquake McGoons as much as I wanted: Turk, trombone; Bob Shultz, trumpet; Bob Helm, clarinet; Pete Clute, piano; (Bill Carroll, tuba; John Gill, banjo: I didn’t catch the drummer’s name) photo by Mark Weber — the club was right under the Bay Bridge on the Frisco side 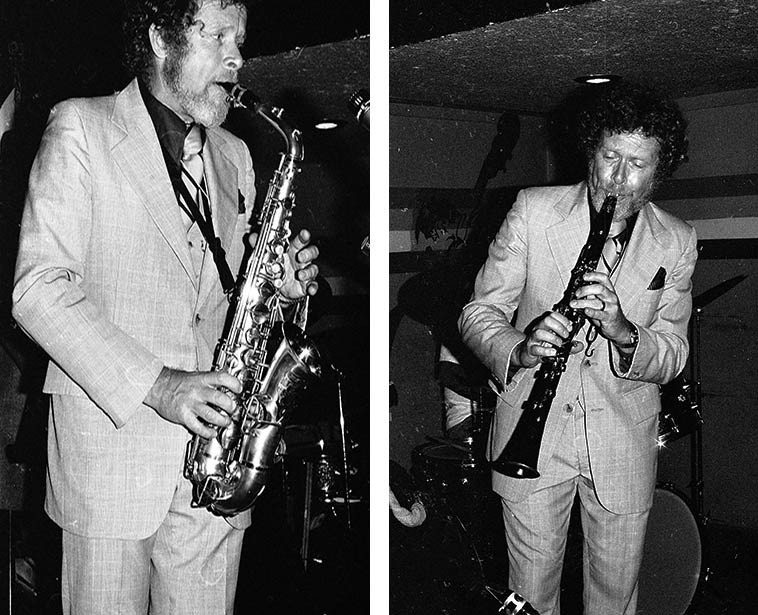 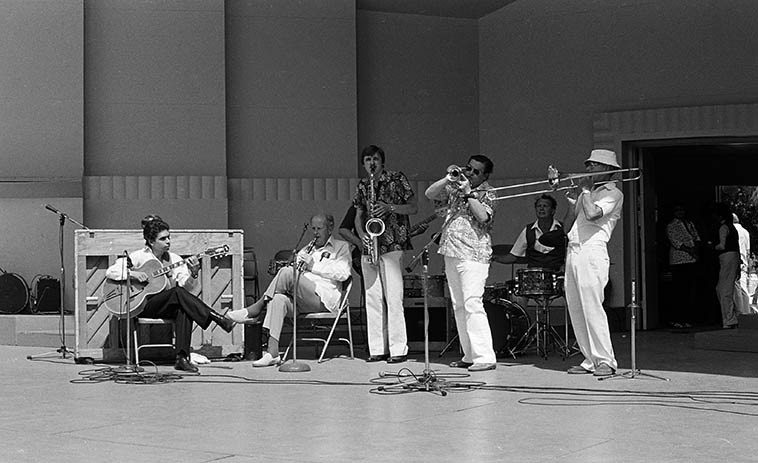 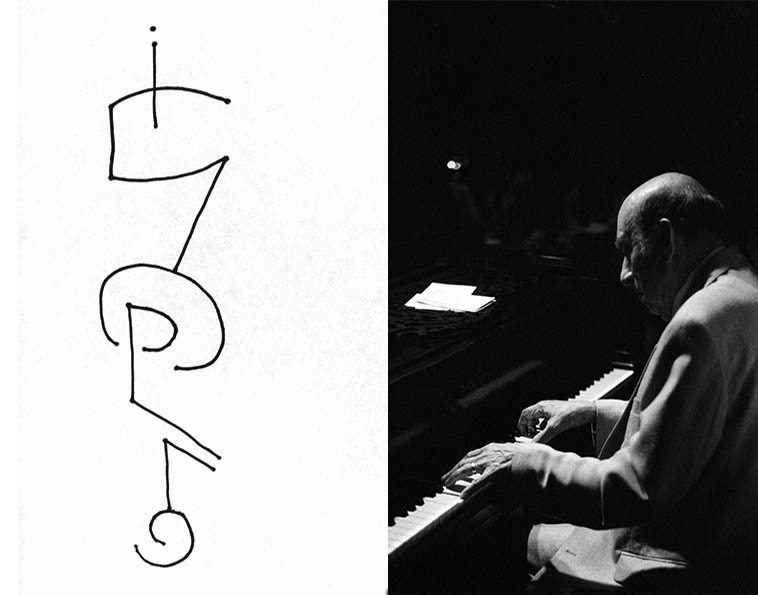 Art Hodes solo evening at a little club in Cleveland Heights called Night Town, just down the street from where we lived at the time — July 22, 1988 Ohio — photo & line drawing by Mark Weber 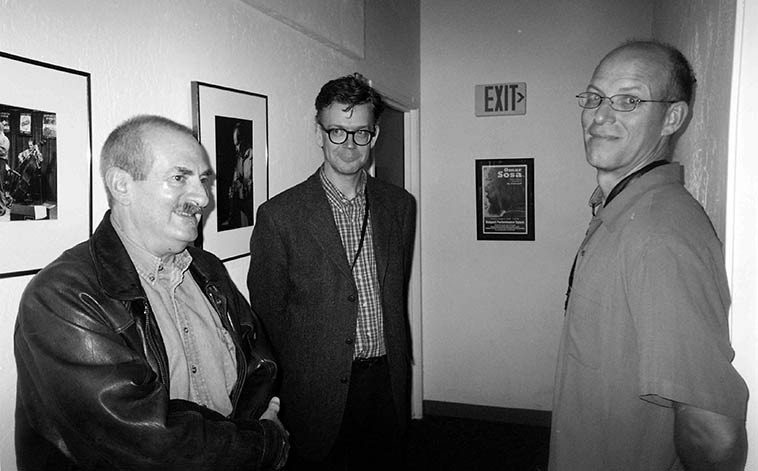 Kenny Davern, Ab Baars, Michael Moore in the hallway at Outpost Performance Space — There’s a real story behind this: Kenny & Elsa lived in the eastern mountains outside Albuquerque, and on this evening (October 25, 2oo4) Kenny and I were on the telephone but I had to get over to Outpost and I said to KD, “Man, if you got any sense you’d make this concert because these guys are so far out that they’re back in, one of the great bands on the planet” and I didn’t actually expect Kenny to come, but about 15 minutes into ICP’s first set in the door comes Kenny, and I groaned to myself, man, I hope Kenny likes this madness or he’s going to kill me —— Well, at the break he comes over to me with eyes sparkling and wildly says, “THESE GUYS ARE GREAT!” And I looked at him wondering what he had been smoking? They of course WERE great, but Kenny was somewhat a traditionalist, even though he is on record as approving of Ornette at the 5 Spot 1959 (his published letter to dOWNBEAT at the time) and also dug Albert Ayler, but he could be pretty tough on much else in the avant garde. SO, I take him backstage and introduce him, and everybody’s happy, and Kenny even pointed to Han’s rolled up pant’s cuff and said “Cliff Leeman” and Han jumped out of his chair with glee because he knew what Kenny was talking about (Eddie Condon’s drummer Cliff Leeman did the same thing with his cuff), and so the librarians in the band were flipping through their book and pulled all the old Duke, Hoagy, Louis, 1930s things they had and the entire second set was for Kenny, and Kenny just fell in love ——- afterwards, as they were packing Kenny says to them like a kid who wants to join the circus: “Take me with you” ———-AND SO THEY did: on their subsequent annual return to Albuquerque the next year (2005) Kenny played the entire show in the reed section. AND THAT’s another story, pure glory, luckily we have it recorded . . . . . . . 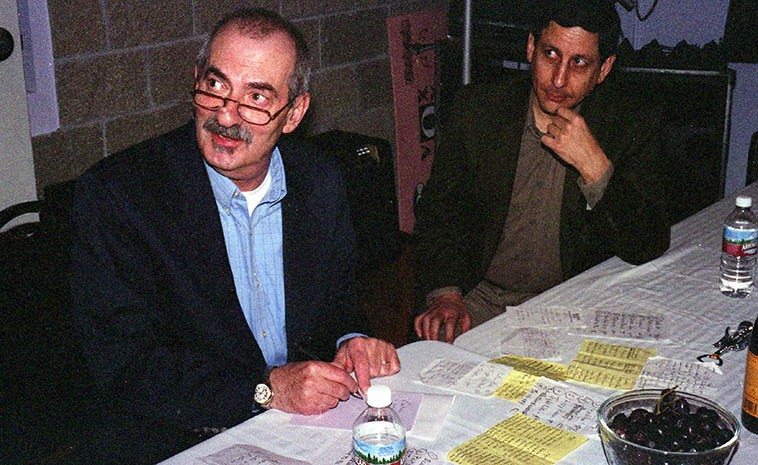 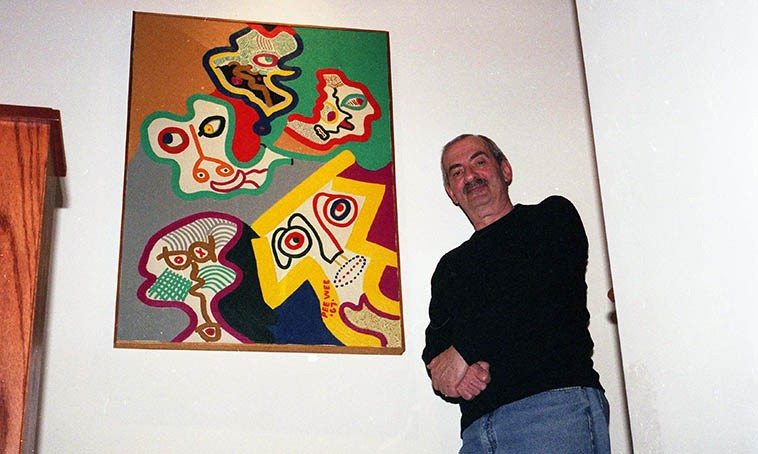 Kenny Davern and his Pee Wee Russell at the top of the stairs — February 11, 2oo4 Sandia Park, New Mexico — photo by Mark Weber 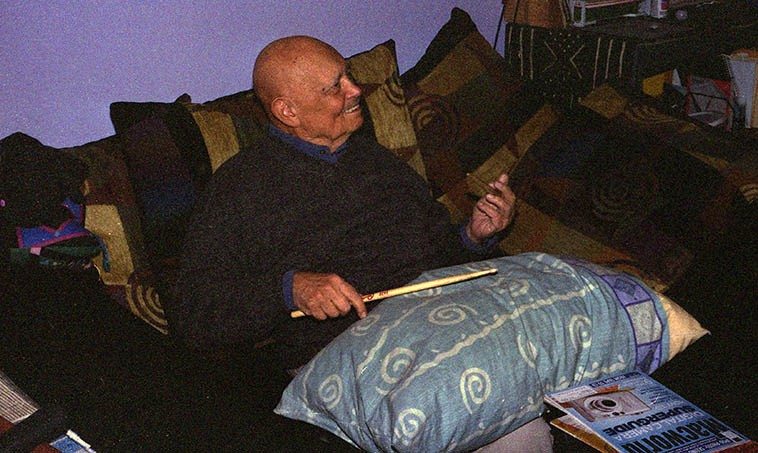 Tony DeNicola backstage as long-standing member of Kenny Davern Quartet — December 13, 2004 — KD always said of Tony, “Like American Express, I never leave home without him” —- I was standing on stage this night when John Trentacosta brought the bass drum that Tony needed (Tony preferred huge bass drums) and John brought the biggest he had which was probably 22″ and Tony looked at John and said, “What are you, a bebopper?” What can you say to that? Arbors Records released a CD culled from the two nights there at Outpost Performance Space (Tony DeNicola 1927-2006) 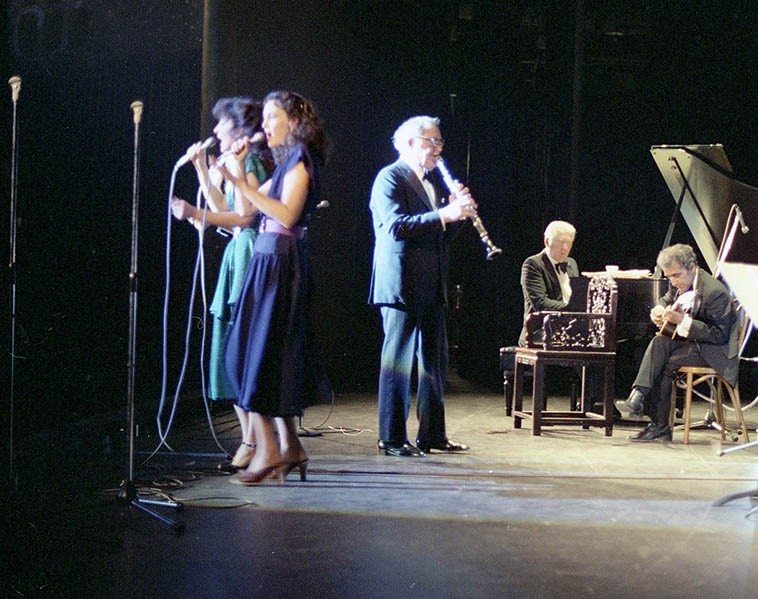 Benny Goodman Septet + Rare Silk: Eddie Duran, guitar; Don Haas, piano; (Al Obidenski, bass; John Markham, drums; Dick Nash, trombone; Graham Young, trumpet) at Bridges Auditorium, Claremont Colleges, Southern California — October 12, 1980 — photo by Mark Weber —- Being more or less unaware of BG being a hard case I asked the band where he was and like sending a lamb to slaughter they nodded toward a door and off I went to Benny’s private waiting room, he was sipping from a tumbler of brandy with his wife, and I had him autograph my LP that he recorded with Bela Bartok and then he asked me if I knew classical music and I said sure and so we talked about classical music for about 20 minutes, nothing special, and he was quite amenable ——- photographing from the blinds I got to see the renowned Goodman Ray at work, but it seemed more to me that he was in a trance, not really drilling one of his band members, my grandfather did the same thing when we played guitars together and mostly his eyes were staring but not seeing, his mind being on the music . . . . . . BUT, I could be wrong . . . . . 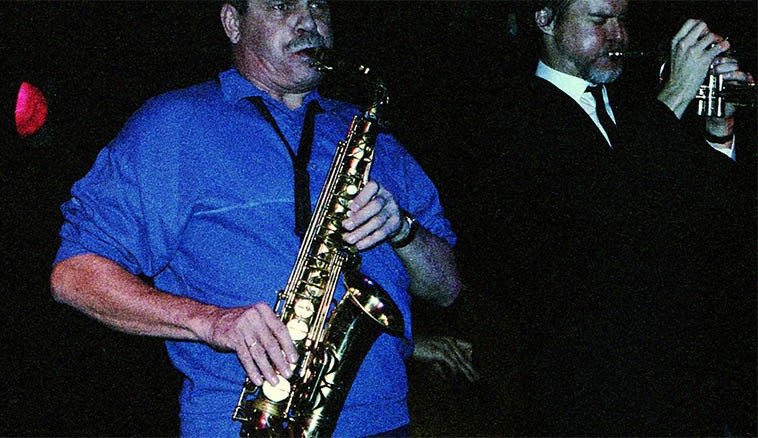 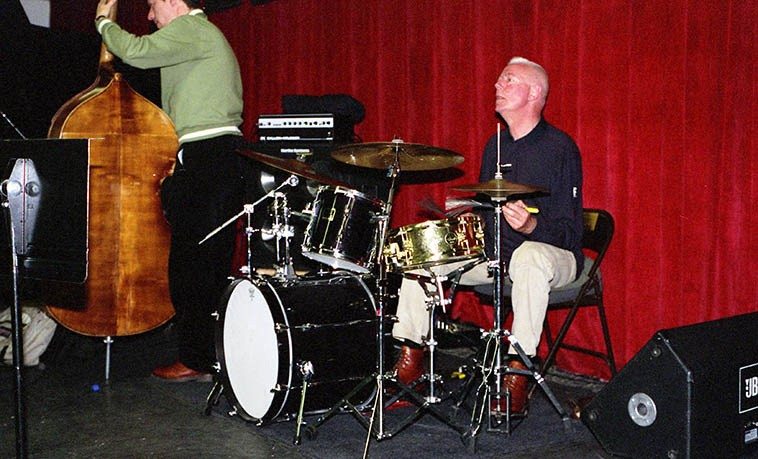 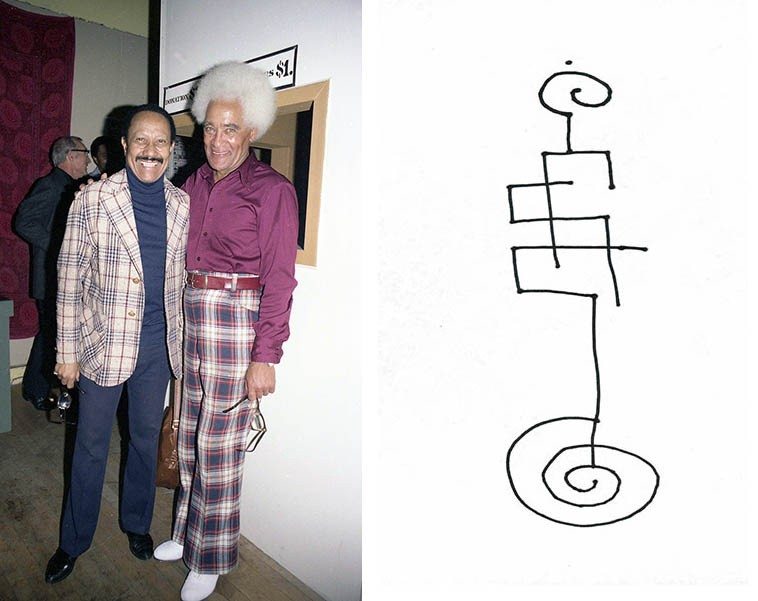 Two legendary jazz tap dancers: Fayard Nicholas and Foster Johnson — October 13, 1980 at Pasadena Film Forum — photo by Mark Weber —– I hope some of the Nicholas Brothers dance routines are on YouTube because they are staggering, I first saw this footage at Mark Cantor’s salon in Beverly Glen, and Foster as well, who also booked Charlie Parker into his Finale Club in L.A. in 1946