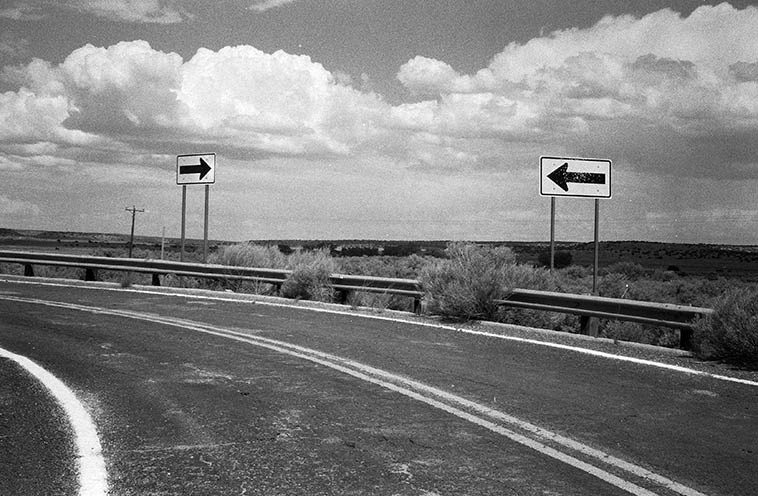 I was on both coasts this summer, which is not so unusual, back and forth and back again, actually. Rental cars are quite reasonable and modern and after a day or two you settle into the rhythm of the driving alone, it’s fairly internal: I stop in pinon & juniper forests of Arizona to sit awhile, pick up a pine cone, I’ve changed my ideas about pine cones nowadays, I no longer look for a perfect unblemished one, it seems more real to get one that is broken or has been squirrel-bitten, missing a few petals, set it on the motel TV that night. I do the same with the conglomerate rock on the mountain in the Mojave I have visited for ten years now off Kelbaker Road, I sit and can see clear down to Joshua Tree National Monument sixty miles south, back in the early 70s I hiked all around that rocked wilderness, then I do my Buddha thing and close my eyes and hook up with the flow of consciousness, one time I open’d my eyes and the sun had set and Earendil the Evening Star was directly west, always in the west, which was my path in the universe that night.

And then in Manhattan early this September I’m sitting at a sidewalk table at the Silver Moon Bakery, a little cafe on Broadway at 105th that Connie introduced me to back in 2000 I think it was. And I’m sitting there having an Earl Grey with a mozzarella w/pesto & tomato on sourdough baguette sandwich when along comes Carol Liebowitz, one of those deep-dive pianists, with grocery bags. Well, it wasn’t all that surprising, it was just that I had arrived early and was letting an hour go by before showing up at her studio for a musical gathering that afternoon. Idling.

To visit Manhattan is to be prepared to see pastries in bakeries, window displays, glass cases, shelves upon shelves of pies, scones, muffins, date-nut sourdough baguettes! beautiful beautiful confections: the cases at Silver Moon are better than visiting an art museum — you need your armor to resist these indulgences — I said to the handsome woman in jogging outfit standing with me at the cash register, “Wow, this stuff looks really good,” and she said, “Yes, and it is, that’s the problem” —- they do not need Wayne Thiebaud to qualify themselves — like an unreality they float there in pure desire.

Maybe a spell was cast over me when I was a child, music carries something I want. And now, going back & forth, coast to coast, I follow it, to hear what it might be. 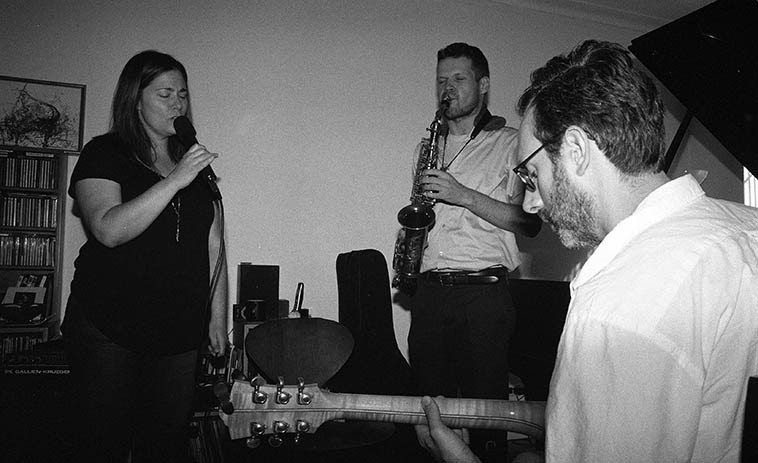 Cheryl Richards: jam session at Carol Liebowitz’s studio — September 4, 2o15 — among the participants that afternoon coincidentally these three realized they were all there, of whom made Cheryl’s recent release IF NOT FOR YOU (New Artists Records), so they sang a few for us — Nick Lyons, saxophone, and Adam Caine, guitar — photo by Mark Weber lounging on the sofa 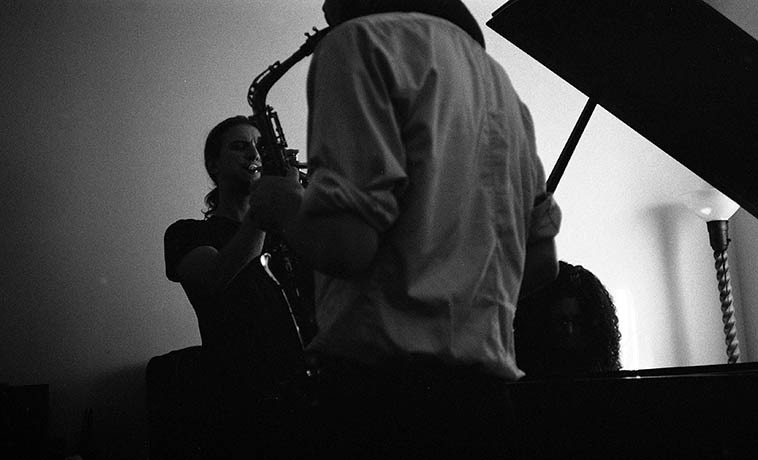 Jam session at Carol Liebowitz’s studio on 103rd Street, Manhattan — September 4, 2o15 — Ryan Messina, trumpet; Nick Lyons, alto; Carol, piano — photo by Mark Weber — Carol’s piano envelopes everything in the room, in a good way, it does not dominate, it’s as if over the years it has grown into that room and inhabits all the corners and shadows 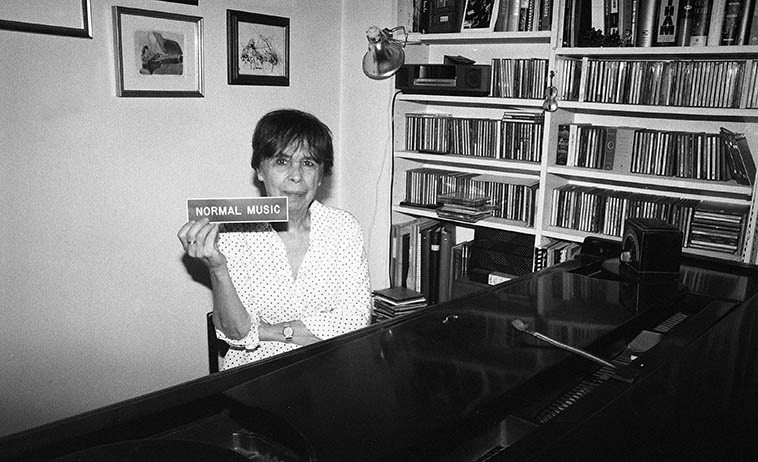 Virg Dzurinko at her piano in her studio in Harlem — September 5, 2o15 — photo by Mark Weber — (Normal Music is the name of Virg’s publishing company) — the piano is an 1898 Steinway six-four — her credo for the “alchemical improvisor” is: One thing leads to another . . . . . 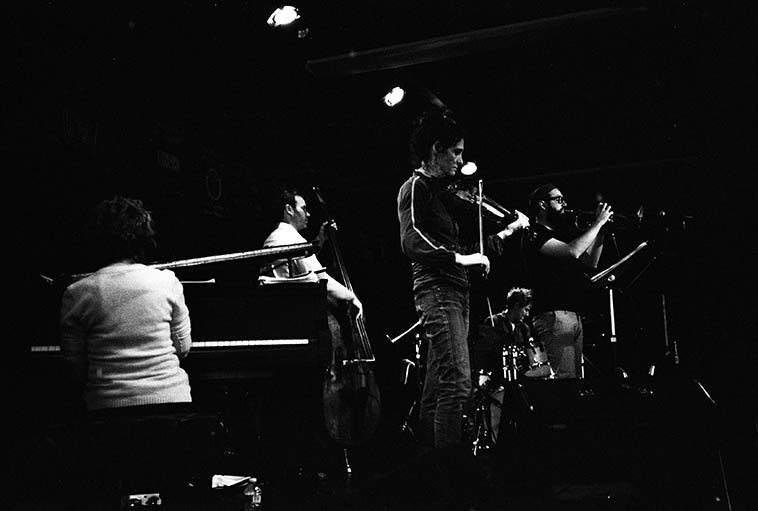 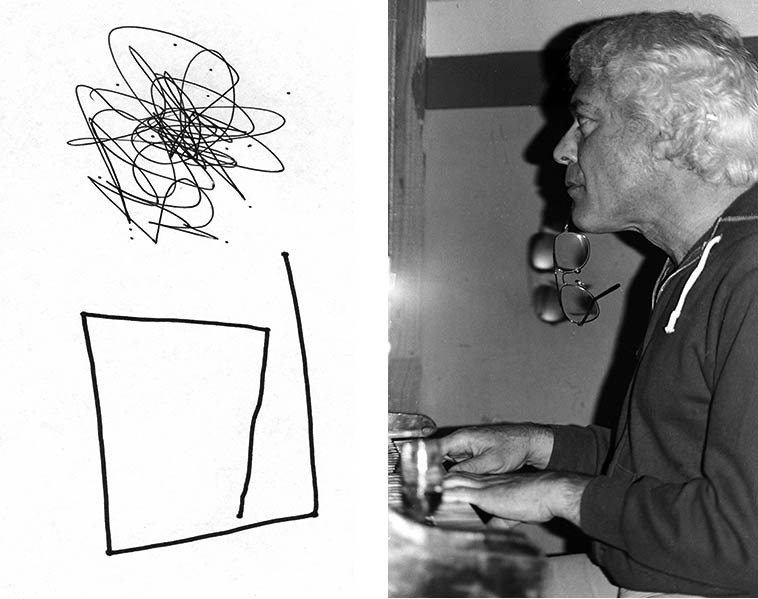 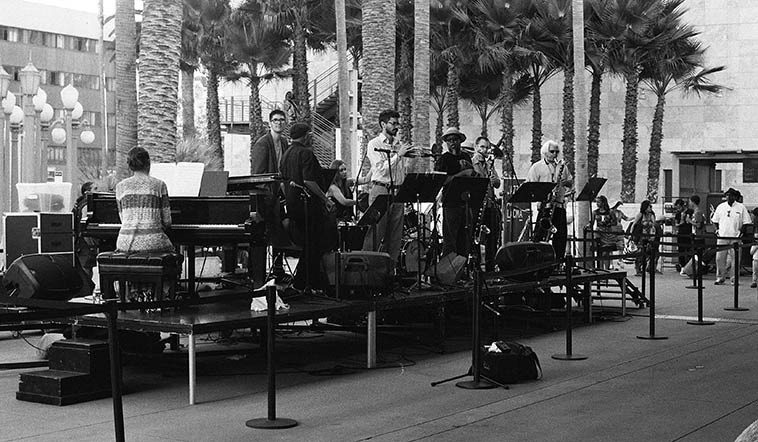 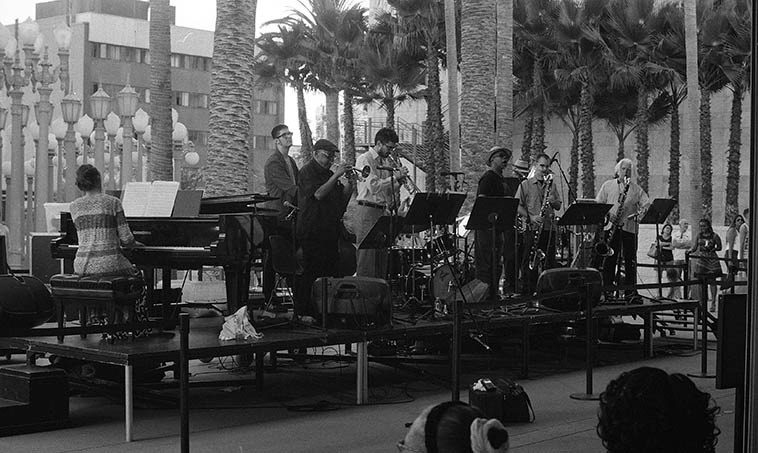 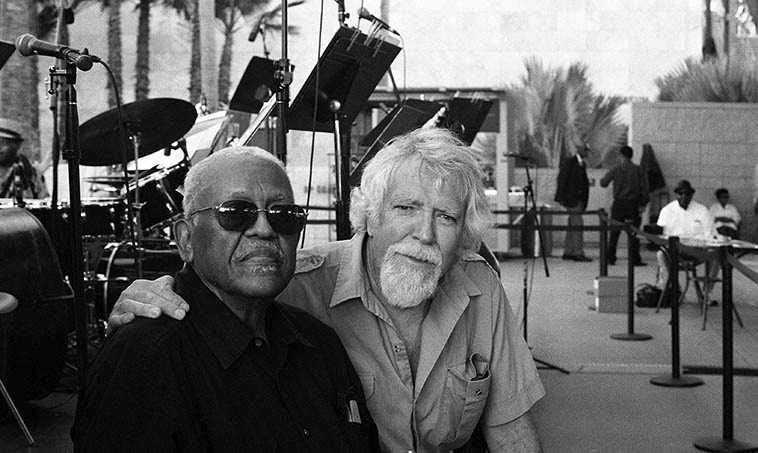 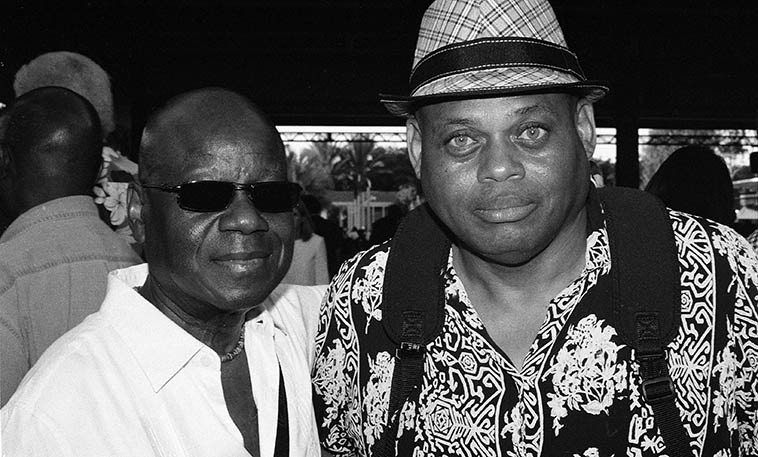 Fred Jackson & William Roper — LACMA (Los Angeles County Museum of Art) — August 14, 2o15 — photo by Mark Weber —— William had to fill me in on Mr Jackson: “That is Fred Jackson, reed player, specializing in lead alto. You have been hearing Fred most of your adult life, backing up many artists, a lot of them of the R&B/Motown variety, but also on many televisions show of yore (like Flip Wilson) and jazz acts. Fred is a jazzman, but like many, he hasn’t really led a lot of groups. You won’t find much about him on the internet. You really have to nurture an internet presence and he doesn’t. He is one of the people I plan to include in my interview series, though he doesn’t really do “out,” stuff. He is one of those guys that has helped the world to feel as they feel, that no one knows about.” 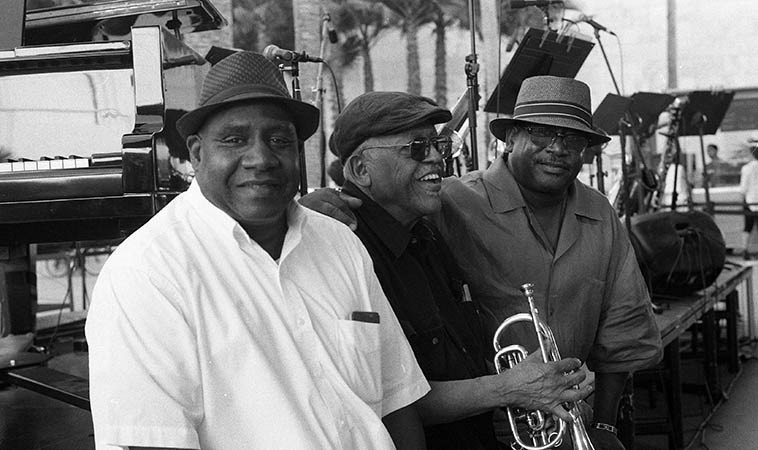 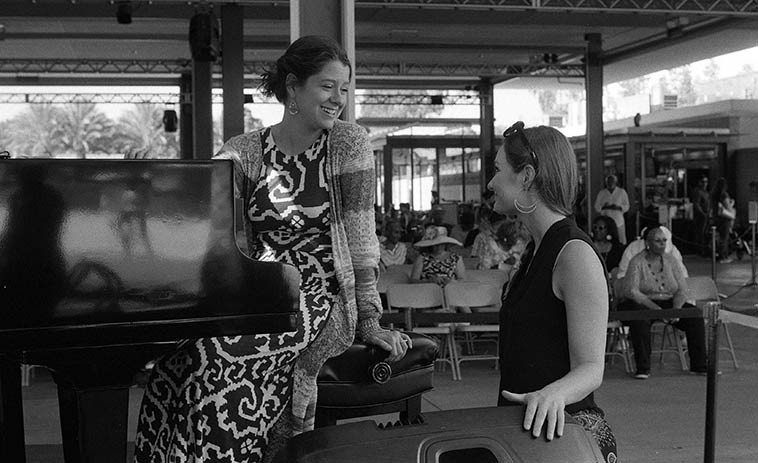 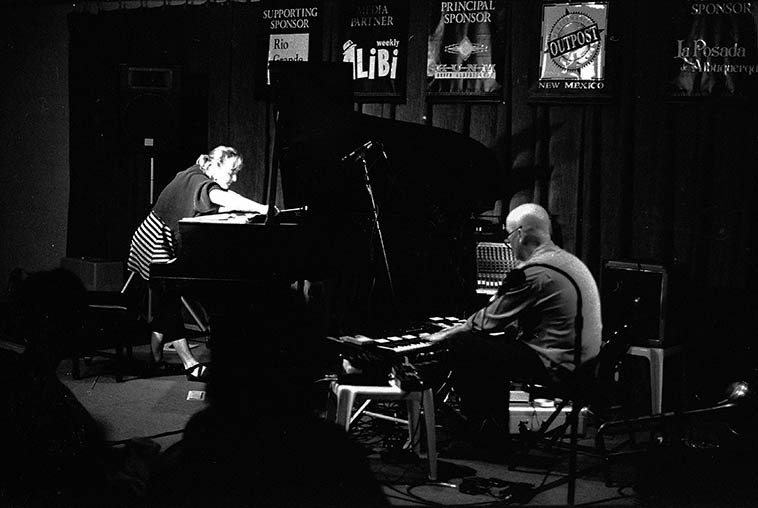 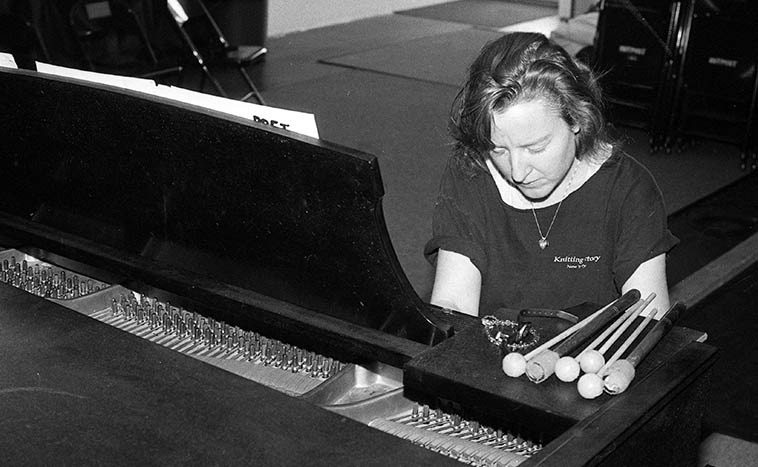 Afternoon practice on a Thursday: Myra Melford on the Outpost Steinway A — October 19, 1995 — photo by Mark Weber — Myra is bringing her Snowy Egret to the Outpost this Friday (October 16, 2o15) — Follow her cogent words speaking with Albuquerque’s own Mel Minter last week at > http://www.melminter.com/2015/10/11/myra-melford-the-snowy-egret-interview/