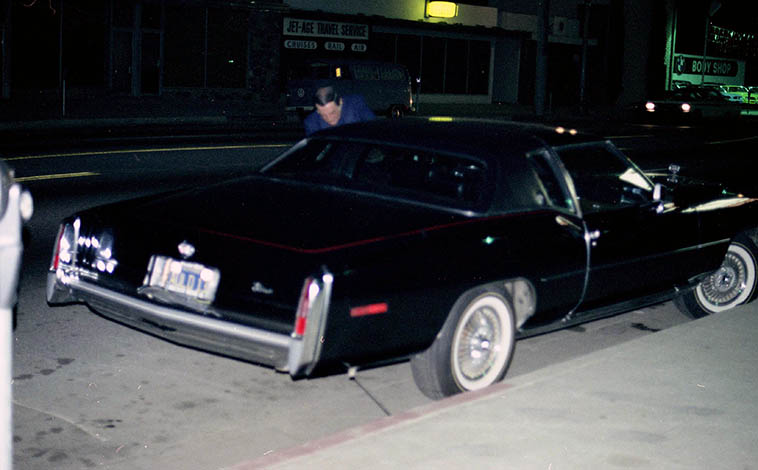 Georgie Auld outside Donte’s, North Hollywood —- note that his Cadillac plates reads AULD 13 —- (there’s a better exposure in existence somewhere, and we’re hoping it’ll turn up some day, it’s probably in the archive at UCLA) (this one is blurry) but, it was a long night at the bar and Georgie’s friends were begging him not to drive, alas, he didn’t live very far away — April 27, 1977 — photo by Mark Weber —– That’s Georgie’s tenor all over the soundtrack to Scorsese’s NEW YORK, NEW YORK, and Ralph Burns arrangements which I hope to play some on this show, if I don’t get bogged down in Christmas music

Gather ye rosebuds while ye may
For so and so we did not know
How quickly did the clock tick
and toll, doing its work so mortally

And wot was that syngynge
by the manne Sinatra
who’s moon and June had to lyssen
to such hard piteous lamentation sung?

A baleful howling in chorus with the dogs
and the jailhouse full of those who’s time
had come, never having
borrow’d from the Earth
one red rose nor gave of themselves
whole-heartedlee, “this nearly was mine”

And of the night we called it a day
So and so, it all goes away 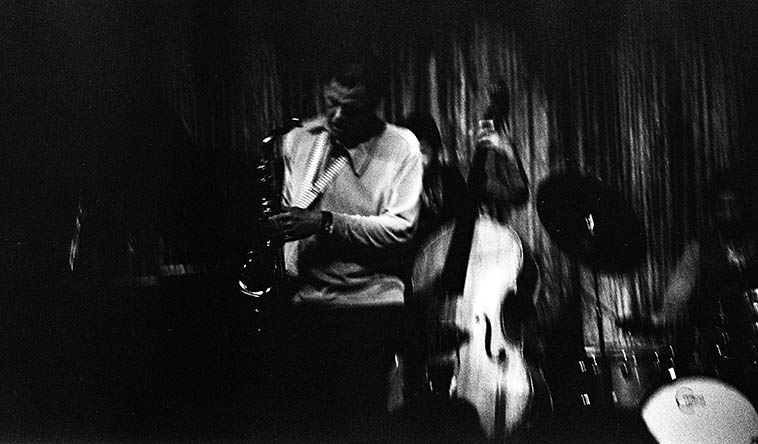 Dexter Gordon at The Lighthouse, Hermosa Beach, California — December 23, 1976 with a band of Angelenos: Frank DeLaRosa, bass; Jimmie Smith, drums; Dolo Coker, piano — photo by Mark Weber —- Dexter would quote Christmas songs in July and we loved him for it, we’d all laugh —- on-stage in performance was always a laboratory for Dexter, he took everything apart, reassembled it, took wrong turns, got out on a limb, sawed it off, picked himself back up and kept on blowing —- Ten years ago I gave a box of jazz club memorabilia to UCLA Special Collections — matchbooks, menus, ticket stubs, buttons, programs, and inadvertently (I discover’d later) had included the roach end of a joint I had smoked with Dexter at some point, that I had encased in a clear plastic box, held in place by a wad of cotton, I kept that for years on the livingroom coffee table as a conversation piece, I sure hope UCLA keeps it safe. 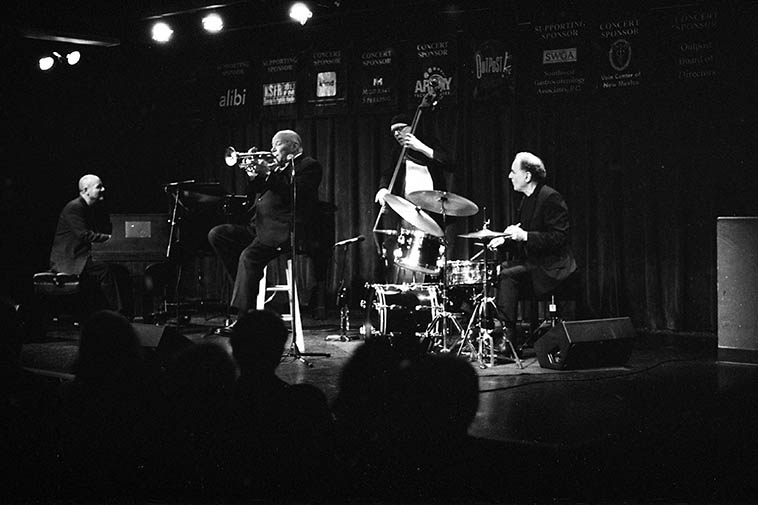 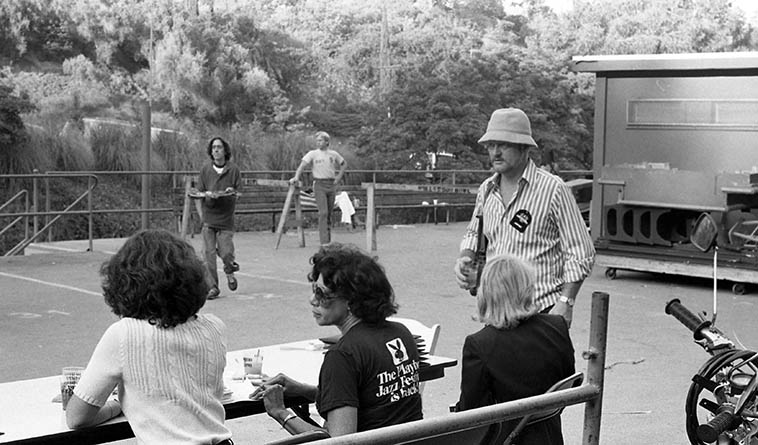 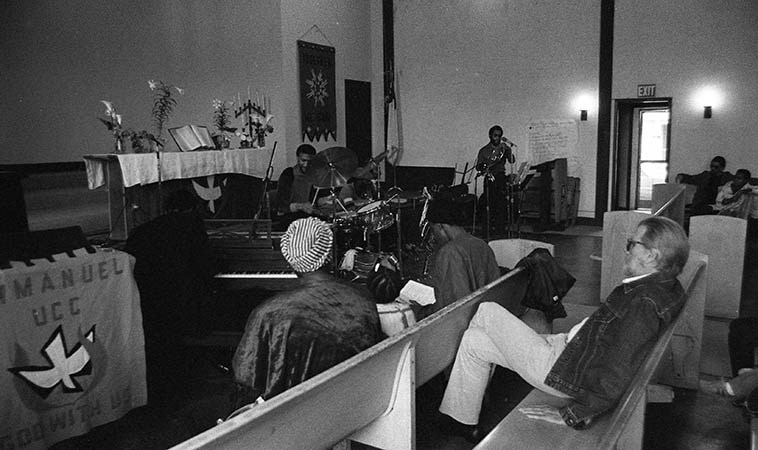 Tom Albach at Pan Afrikan Peoples Arkestra last-Sunday-of-the-month concert at Immanuel United Church of Christ, Los Angeles — April 26, 1981 — w/ Horace Tapscott hunker’d down over the spinet and Fundi LeGohn, French-horn; Fritz Wise, drums: Linda Hill and JuJeGr sitting in front row — photo by Mark Weber —- Today (December 13, 2015) is Tom’s 90th birthday, I just talked with him on the phone (he lives nearby in Albuquerque with his wife Pat), maybe not completely hale & hearty, but still full of piss & vinegar, having survived a couple bouts with cancer, he’s on the mend, still reading his beloved Manchester Guardian (British) and Le Monde Diplomatique (French) for his political news, still smokes a little reefer “a marvelous balm!” for his glaucoma, still walks an hour every morning, “up here the air is so good! it’s great to get out every morning!” still plays pool in the afternoons in his neighborhood (he was once a pool hustler, so don’t engage him on the tables, even at age 90 he can take you), finds the current music scene in America not good, “some of this new jazz sounds like it’s made for 12 or 13 year-olds! It’s infantile, music for kids! Just the fact that I sell more music over-seas in Europe and Japan gives you an indication where things are at, the fact that Trump has a following is indication how successful the Replublicans have been in stupifying the American people . . . . the trouble this country is in, whew, capitalism has turned us into monsters, we’re cruel! And the music, the richness is gone, there’s no dimension, it’s all superficial and jive! I can’t believe the young people became so corrupted, they think their music is hip! I raised my prices! [laughter]” [see Nimbus West Records] —– my favorite quote from him this morning: “All these awards like Grammys and Emmys, they aren’t awards, they’re indictments!” 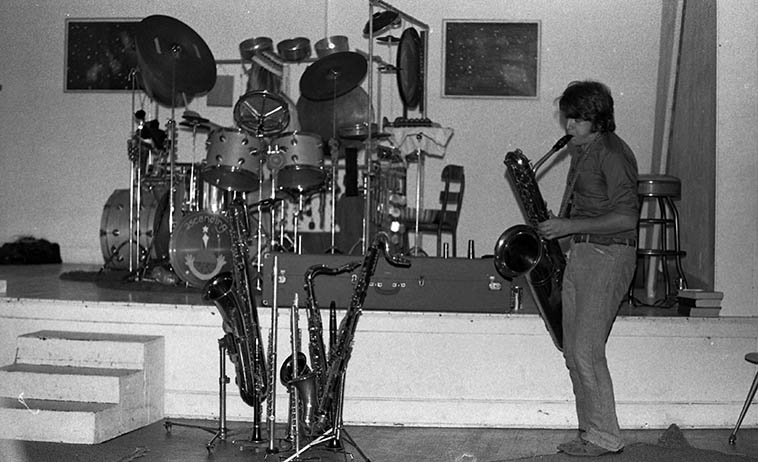 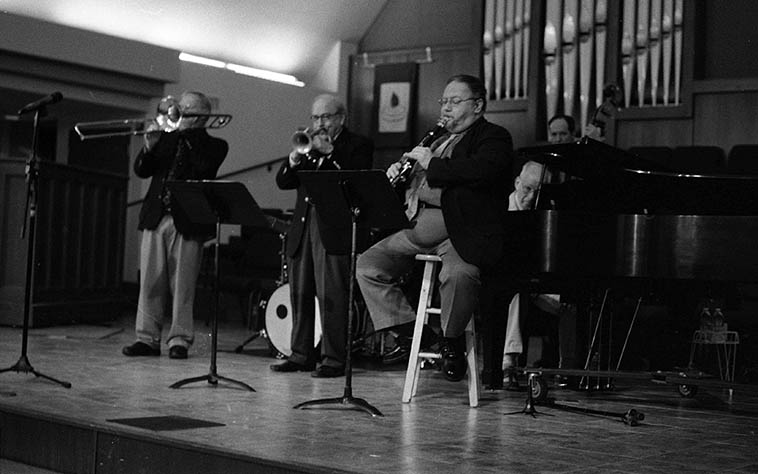 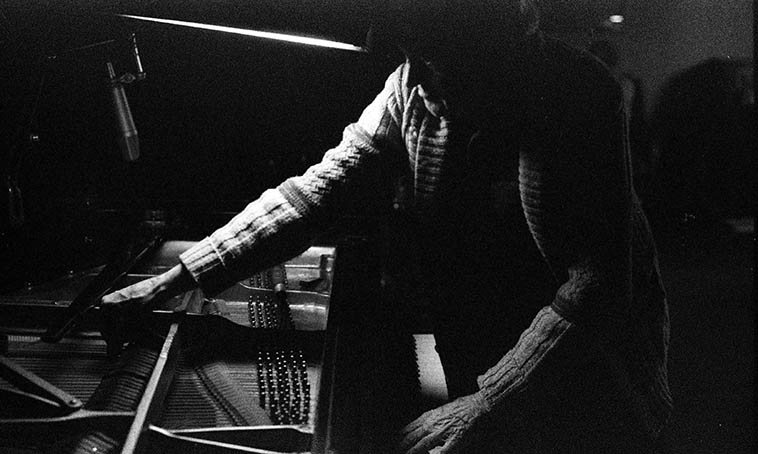 Sal Mosca session at his studio in Mt Vernon NY — December 4, 2oo4 — photo by Mark Weber —– We’ll listen to something from the newly released 5-cd set of his solo tour of Europe in 1981 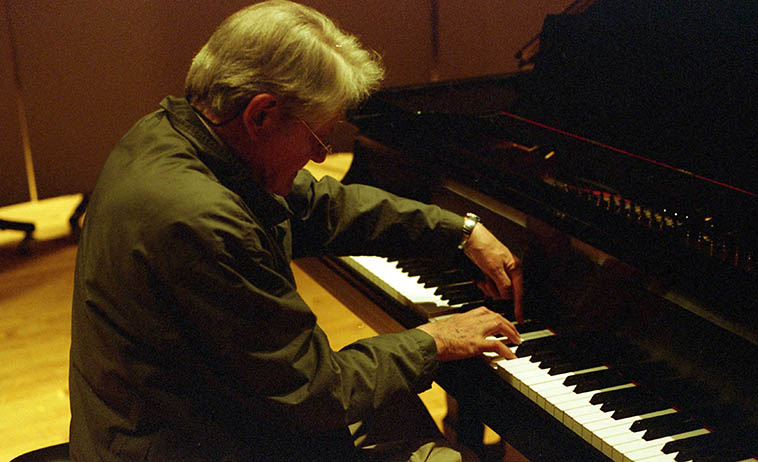 The composer Gordon Mumma was visiting New Mexico in residency at UNM and I talked him into reading the KUNM translator I.D. that I play at the top of the hour, and we also recorded one of his little piano ditties to go with it —- what a great guy! photo by Mark Weber — April 1, 2008 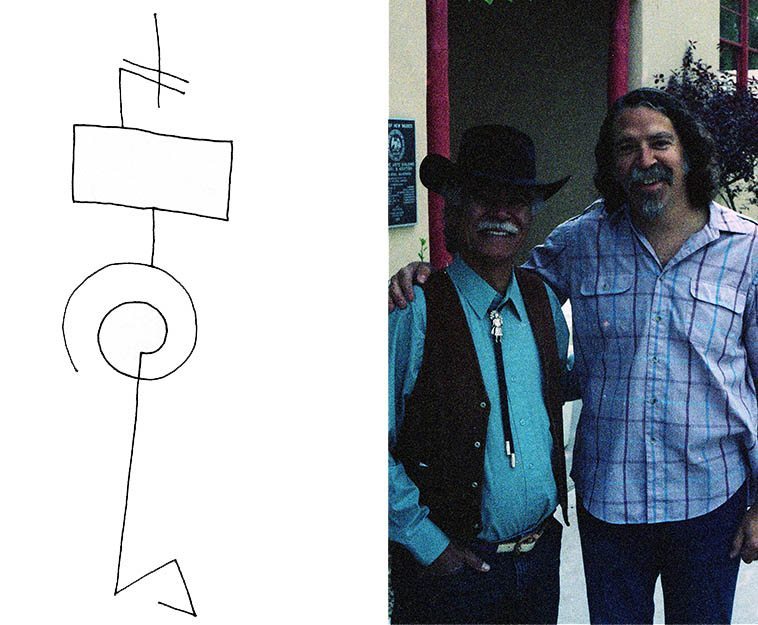 Wow, I didn’t know this photo existed, that’s me with Rudolfo Anaya who is responsible for a masterpiece for the ages BLESS ME ULTIMA, a novel that the moon must have co-authored — photo by Janet — May 6, 1995