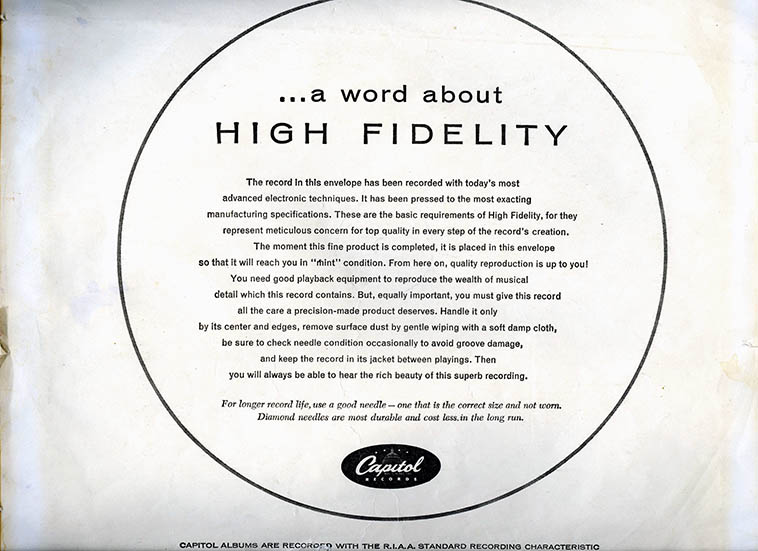 Looks to be 1960s vintage LP sleeve —– And that’s today’s show: Spinning records from the vast cornucopia of jazz history and a word about high fidelity — A lot of ground has been covered in jazz in its short 100-year recorded history from slightly skewed cakewalks to ragtime extrapolations to swinging the gate to space bop to bop Bop — We’ll be talking about that history as well as the history of community supported radio and the place jazz has upon the airwaves

TERRESTRIAL RADIO AND YOUR SUPPORT

Jazz is unknowable. Nobody knows what it is. Like a giant tree with branches that reach a mile there’s a bird nest way out there, full of little twittering birdies, that’s jazz, maybe. A wheelbarrow full of apples, that’s jazz. The long view of history and the journeys out of Africa, that’s jazz. Or, a sandwich of saxophone solos. Who knows? We don’t know what sleep is, either. Sleep goes way back amongst life on Earth, some of the earliest and oldest life forms sleep. Like jazz, we don’t know what it is. I certainly don’t. Somebody said jazz is coming. Really? Coming from where? From the future and it’s wearing some slick shoes.

Of all the many ways you can hear music these days the old-fashioned radio waves version of music is now called “terrestrial radio.” KUNM is also modern with “streaming” live via the internet as well as archives the various programs so that you can listen back. We have more ways to deliver music than we have disk jockeys. There’s a lot out there. In fact, it’s a golden time to be alive and listening to music because almost everything that has ever been recorded is somewhere available. 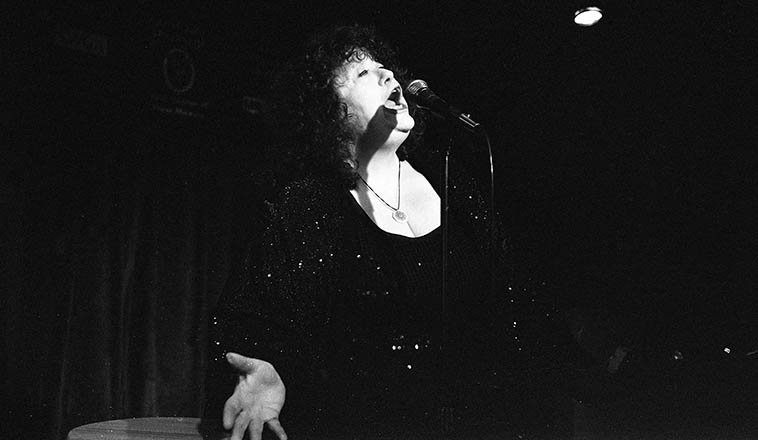 Patti Littlefield during soundcheck completely goofing off doing her Marlene Dietrich impersonation “Falling in love again . . .” —- March 5, 2o15 at the Outpost Performance Space — Patti has been my substitute for ten or fifteen years when I’m out of town and most usually helps with the Fundraising but today (Thursday night) she has a gig at Outpost and lamentably won’t be able to help in our endeavors for community support — photo by Mark Weber 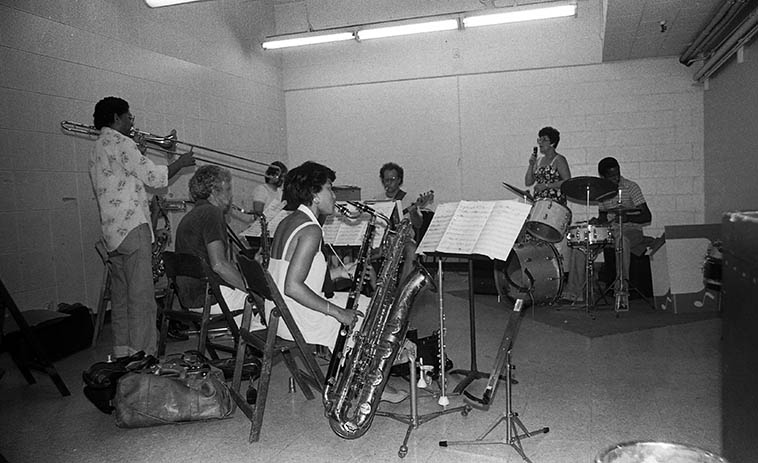 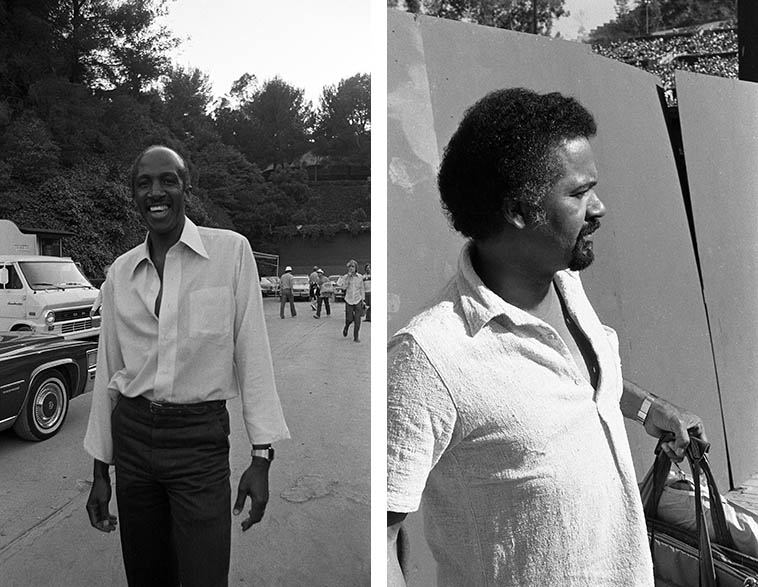 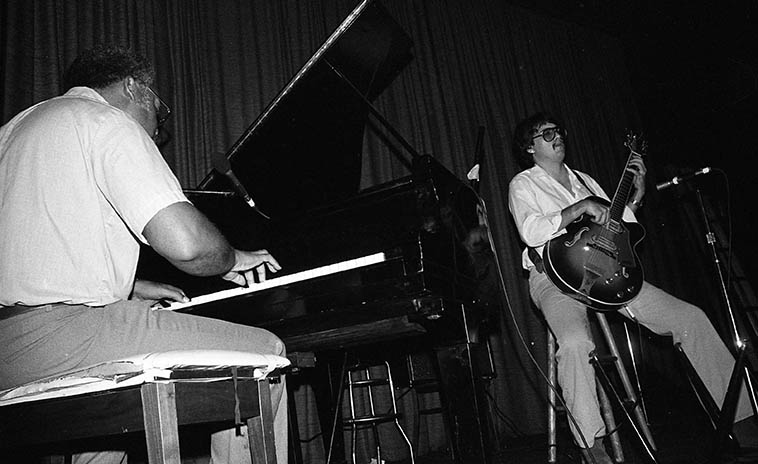 Ellis Marsalis and Steve Masakowski — June 27, 1982 at Tyler’s Beer Garden, 5234 Magazine, New Orleans — photo by Mark Weber —- the patrons were big on the oysters AND the beer in this great jazz spot, I wonder if it’s still there, post-Katrina? 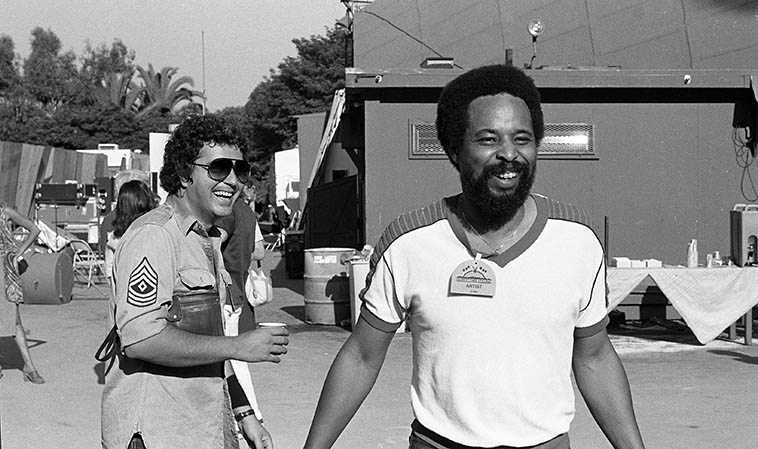 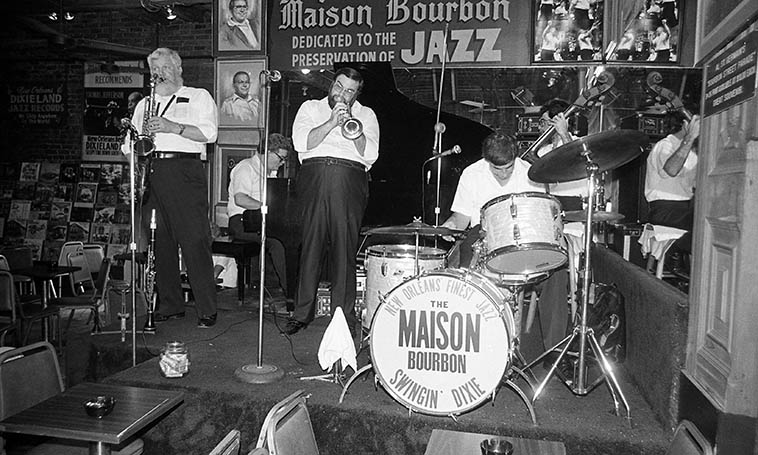 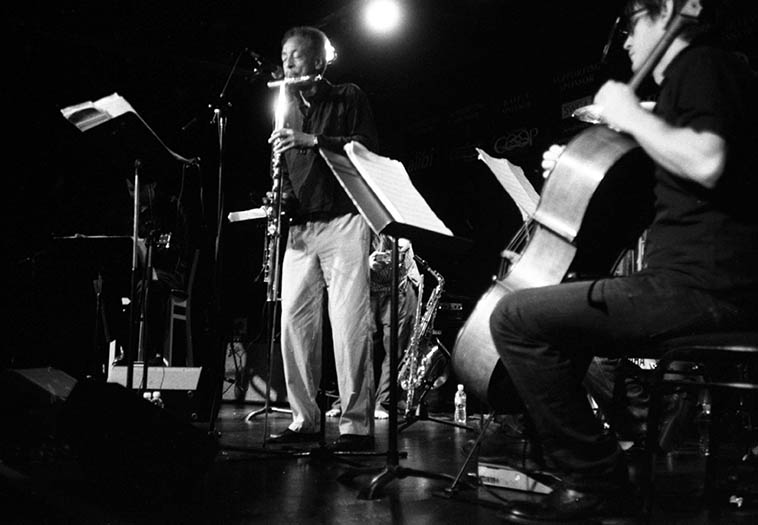 99% of music moves in a direction, it’s going somewhere, then, there’s Henry Threadgill’s Zooid music that seems to exist in space without forward movement, it’s as if resolution is not urgent, completely open to pure existence, reminds me of Scriabin’s “Poem of Ecstasy” or even parts of Philip Glass, although with Glass there is the repetitious build-up that implies something is coming, something expected, 99% of music moves in a direction: Our music reveals that we are trapped within Time’s Arrow —- Henry Threadgill with his Zooid band at Outpost: Liberty Ellman (guitar), Stomu Takemishi (elec-bass), Jose Davila (tuba), Elliot Humberto Kavee (drums), Christopher Hoffman (cello), Henry Threadgill (flutes and alto saxophone) — October 1, 2o10 —- photo by Mark Weber 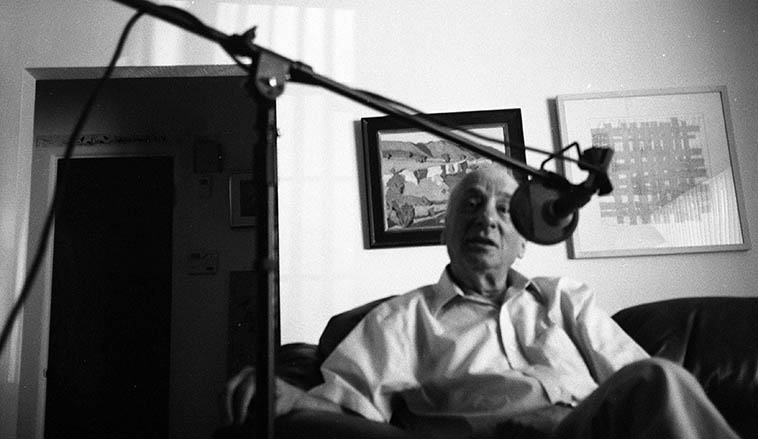 Dick Hyman at Studio 725 — we had a three hour talk about music of which I intend to air someday on the New Mexico airwaves via the exigencies of KUNM — photo by Mark Weber — September 20, 2o10 Albuquerque 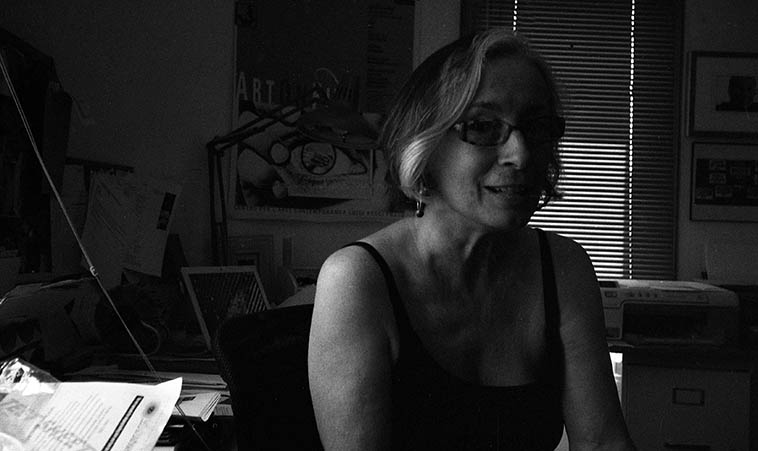 The filmmaker Mary Lance in her home office at New Deal Films– Corrales, New Mexico — July 23, 2o11 — photo by Mark Weber — You’ve seen Mary’s films on PBS, her latest BLUE ALCHEMY: STORIES OF INDIGO (2o11), and AGNES MARTIN (2002), and DIEGO RIVERA I SEE WHAT I PAINT (1989 co-directed with Eric Breitbart), among others, and also if you drop by the theater at Albuquerque Museum of Art, those two short films on the 400-year history of Albuquerque were made by Mary . . . . . . 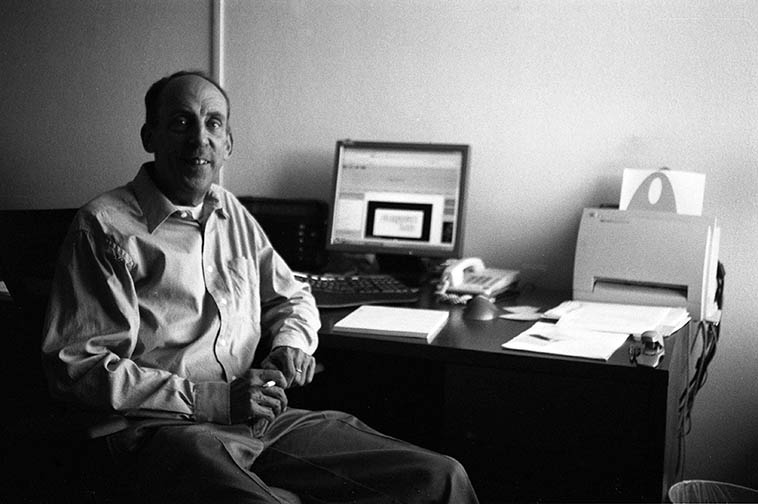 Richard Towne KUNM General Manager at his desk on the 3rd floor of Onate Hall, campus of University of New Mexico — July 21, 2o11 — photo by Mark Weber — RT will be my pitch partner this Thursday as we scour the airwaves for contributions to keep the station afloat — I’m always amazed at Richard’s ability to balance the varied content that a community radio station must have, his ability to wrap his brain around so many points of view, whereas, myself I need only concentrate on my little corner of jazz . . . . Fortunately, we have a healthy listenership (I’ll ask RT for the numbers) that blankets most of the state of New Mexico and only need to fundraise twice a year — We broadcast in the old-fashioned terrestrial way (new jargon) as well as “streaming on-line” 24/7/365 (really new jargon) 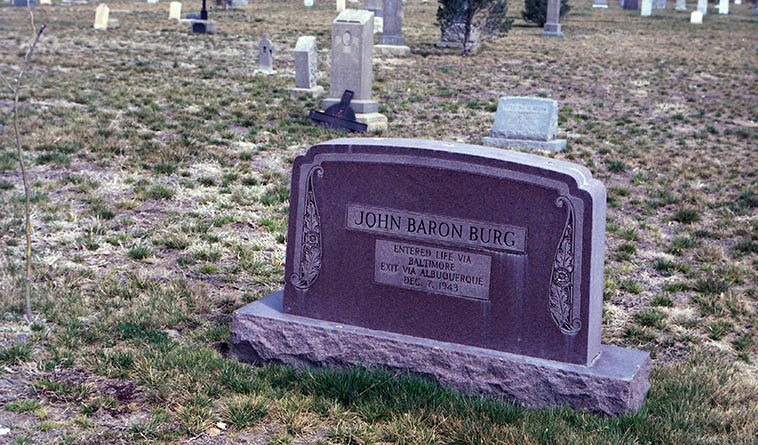 That’s about as perfunctory as you can get — I didn’t know Mr Burg, no doubt an interesting person — Mt Calvary Cemetery, Albuquerque — March 20, 1994 — photo Mark Weber

Lenny Popkin Trio au Duc des Lombards — January 15, 2009 — On one of Carol Tristano’s infrequent visits back to NYC a few years ago the consummate saxophonist Nick Lyons (always there) said to me, “Man, why do I even try. Carol says so much in just her first three notes.” 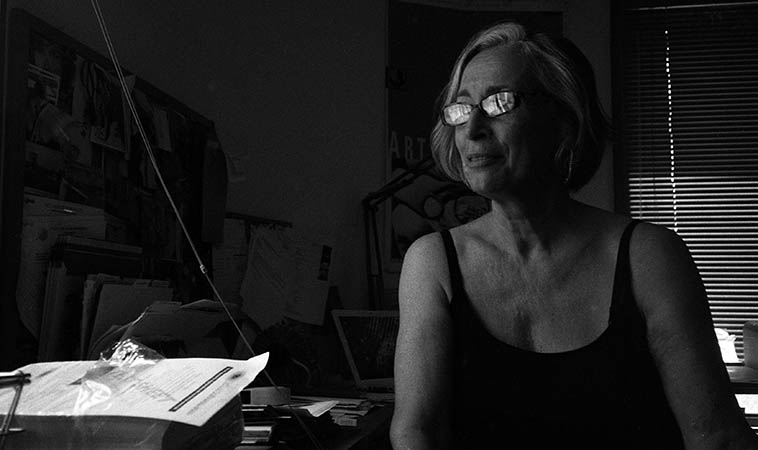