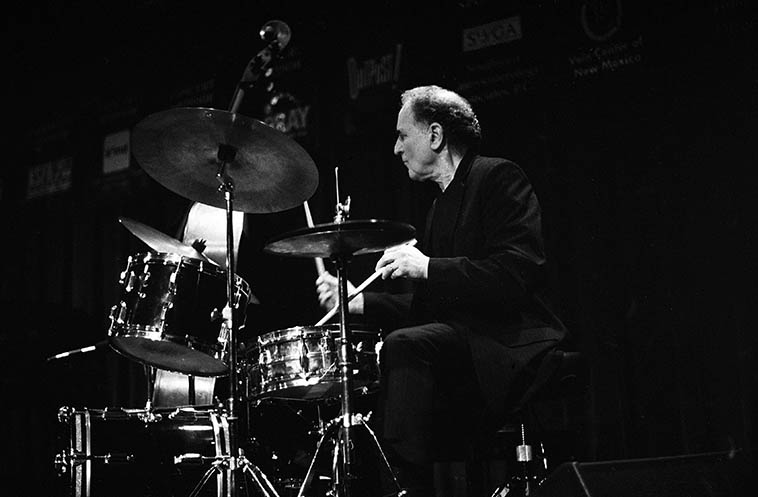 John Trentacosta — October 8, 2o15 — photo by Mark Weber —- Over the years I’ve come to regard the jazz you hear in bars, restaurants, taverns, hotel lounges, as where jazz really exists — these guys who are in the trenches, working in small groups, playing the American Song Book, and the Fake Book, and the Real Book, and whatever else needs revamping into jazz, is the bottom line, (Cal calls them club dates and he should know he’s played thousands) — John Trentacosta is another who has played thousands of club dates — there is a healthy club scene here in New Mexico up and down the Highway 25 corridor between Albuquerque – Santa Fe – Taos these musicians are driving home late late at night up and down 25 (David Parlato wrote a tune in commemoration of that night time drive) —– John moved to Santa Fe about the same time Janet & I came to Albuquerque (1991) (I think John was 1992) from his home on Staten Island — He’s a great drummer and has backed up everybody from Lee Konitz to Nick Brignola to Giacomo Gates (I wouldn’t have known of Giacomo’s gift for song if it wasn’t for John bringing him out to New Mexico) to Joshua Breakstone to Chris Calloway to Doug Lawrence (John is with Warren Vache Quartet in this photo) —– I think it was Kenny Davern who put the bug in my ear about club dates: He loved them, the noisier the more raucous the more Kenny loved it (but, he played clarinet and it cut through all the racket) —- club dates are where jazz stays healthy, where it flexes its muscles, where part-time musicians come and sit in, where somebody’s mom gets up and sings a song, where the new axe is tried out . . . . where it’s Real —– ALSO, check out the YouTube footage of cornetist Don Joseph of Staten Island, that’s John Trentacosta on drums.

Once she initiates her ride
………………….she never lets it go —-
…………………………….it is constant,
…………………………………..no leaving it —-
Like a laser beam
…………the ride permeates
Unwavering concentration of energy
is held in that ride, little bursts are
released via the off-beat snare hits
while the hi-hat marks time
……………..like a hood with a cigarette dangling
……………..eyes half-lidded
……………..leaning up against the wall of a skyscraper
the entire kit begins to glow
flickering warmth when mankind only knew
how to capture fire from lightening strikes,
saved it like the sacred thing it is
glowing, the bass drum is that ancient
drum from around that fire, heard now
from down through the ages
our camp not far from the river under
…………..that ridge-turning cliff
………………on midsummer in deer country
cougar, bear, elk, beaver, crows, eagles
taught us their songs
and the drumset glows
and each glowing coal is worshipped
each tap on the snare
keeps it center, centering,
and the ride never ceases, as
the planet turns with the night
the ride finds Earendel (Venus, the Evening Star) in
…………the west following
it is this western light calm & serene
pure energy out of the universe
undulating waves of the Big Bang
Carol’s ride is that river
toms are hot biscuits & biscotti
tumbling
the moon-illuminated clouds pour from the night
hissing
refracted churning turbulence
glowing 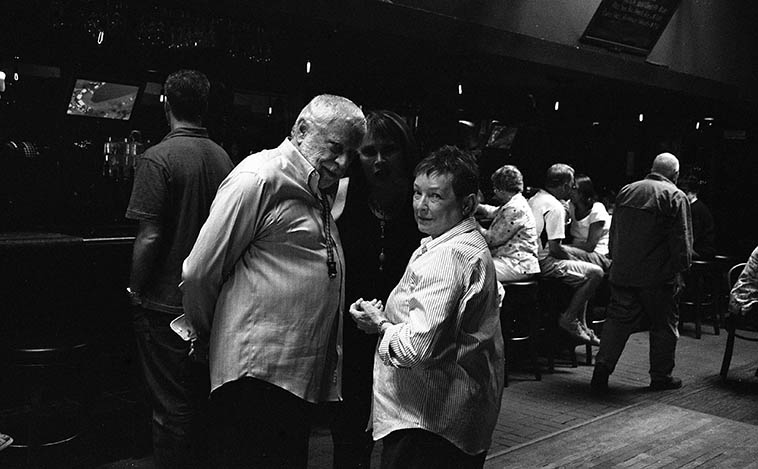 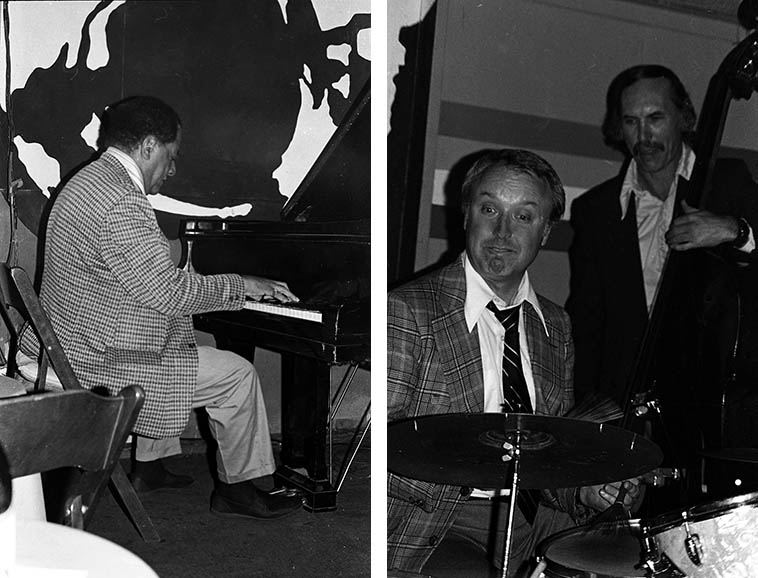 Teddy Wilson in trio with Jake Hanna and Monty Budwig at Donte’s — March 16, 1977 — photos by Mark Weber —- When is there going to be a comprehensive re-issue of the Teddy Wilson Orchestra sides circa 1935-1945? These are the tight swinging high-stepping sterling little 7- or 8-piece bands he had that could swing the gate off its hinges and took the squeak out of our step 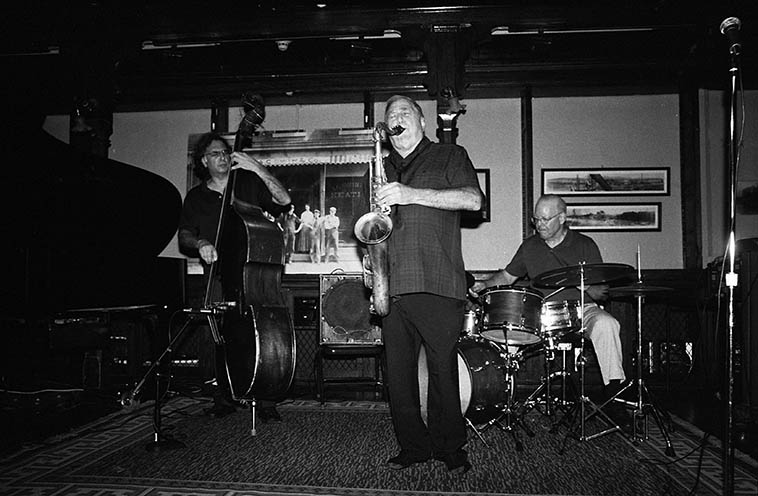 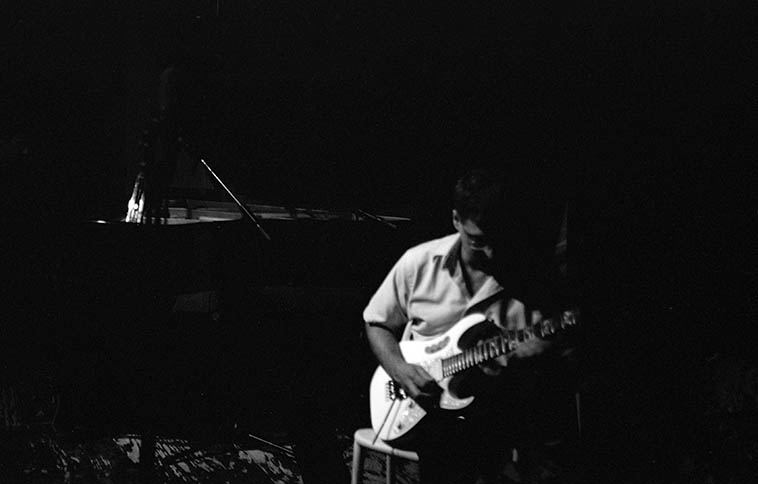 Bud Tristano at The Stone in duet with pianist Valentina Nazarenko — September 22, 2009 — photo by Mark Weber —- (Bud is Carol’s brother) 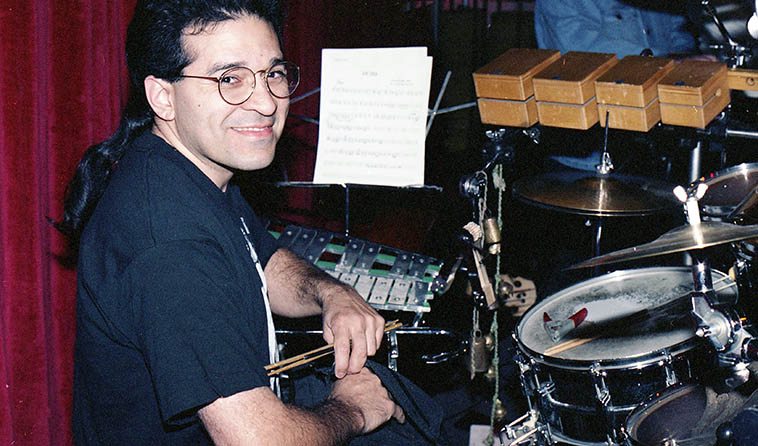 Los Angeles drum maestro Chris Garcia — March 7, 1994 in Albuquerque — photo by Mark Weber — In my next life I want to be a drummer 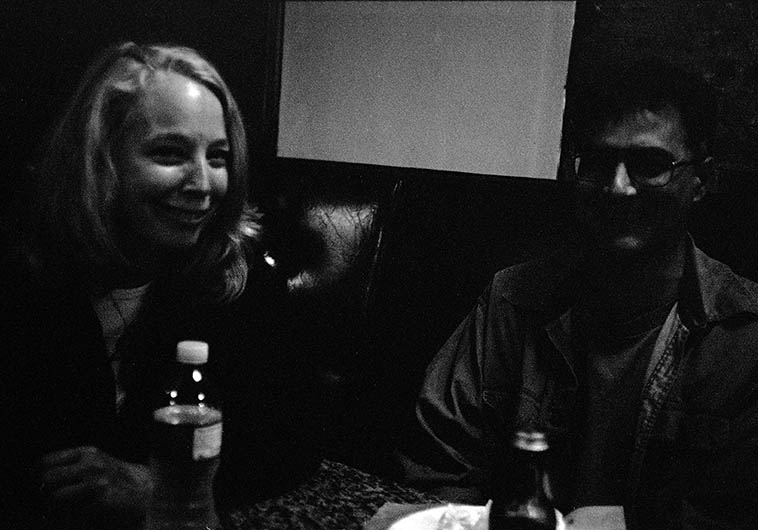 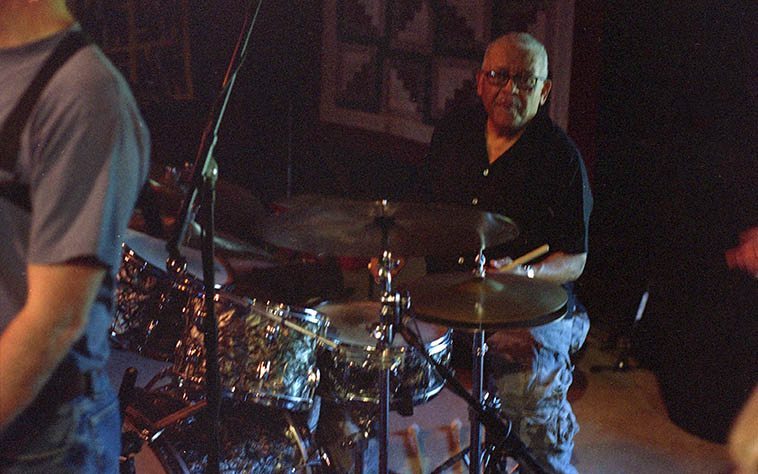 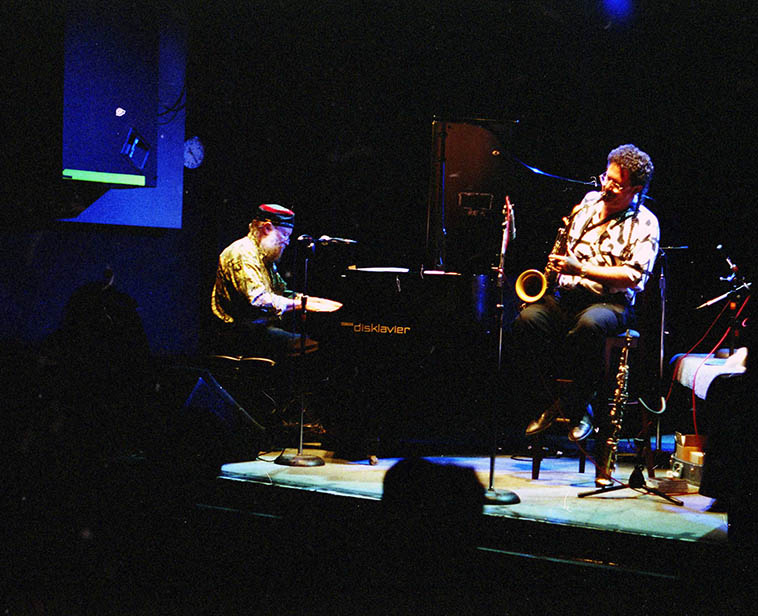 Terry Riley and George Brooks at Knitting Factory — August 9, 1998 — photo by Mark Weber — George will be bringing a band into the Outpost this night here in Albuquerque 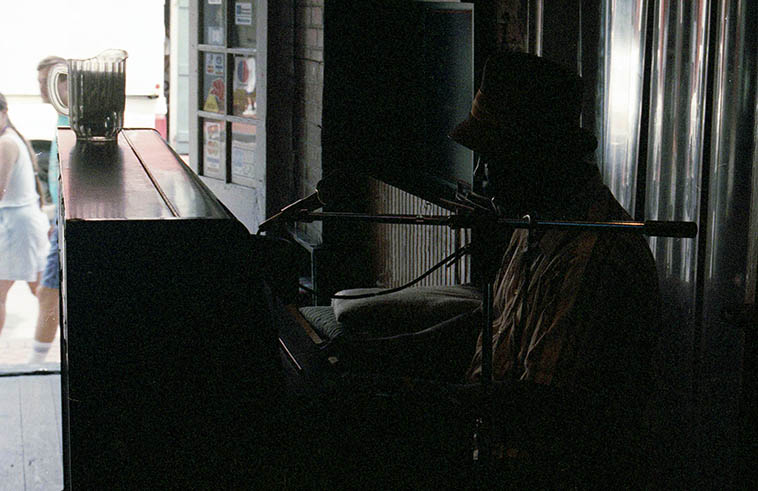 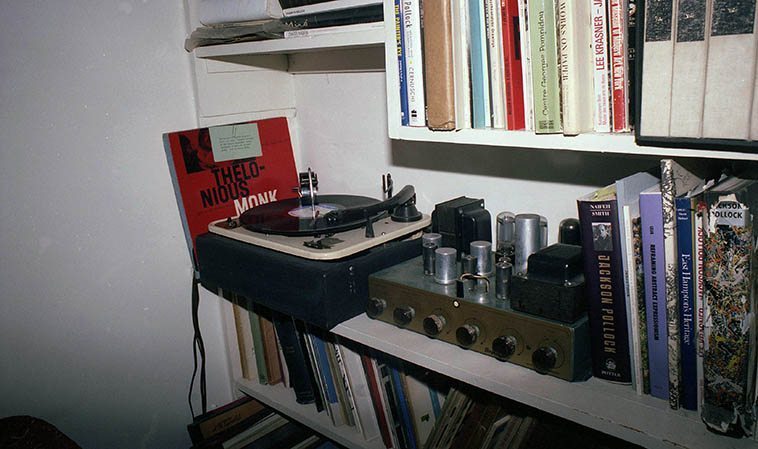 Lenny Popkin Trio in flight: Check out Carol’s concentration on that ride. Acute.