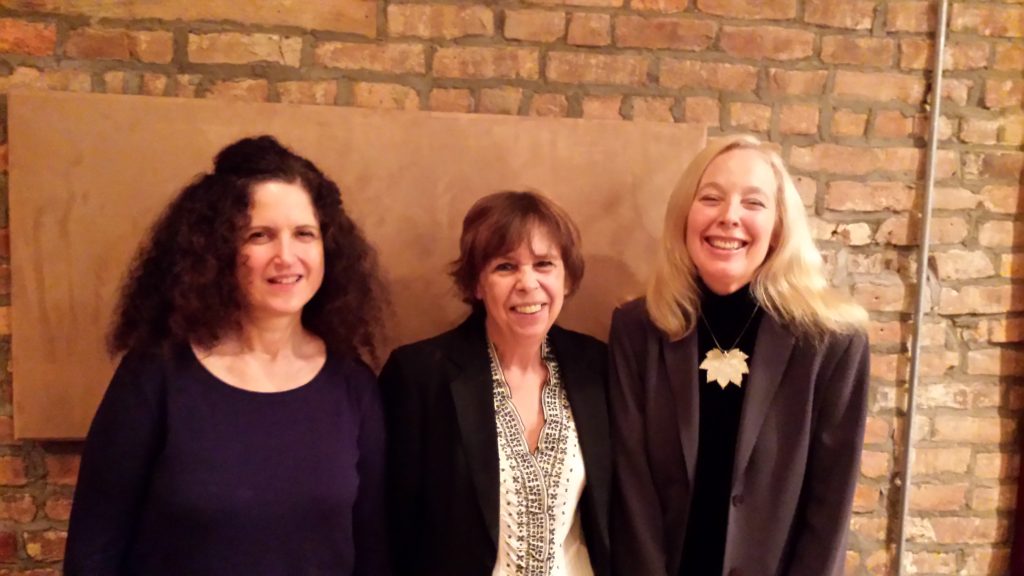 Janet & I, in conjunction with Outpost Performance Space, are sponsoring these two nights of concerts that comprise artists from the NYC area who I have been working with over last several years, all of them are from the universe that comes out of studies with Lennie Tristano, Connie Crothers, and Sal Mosca. We’ve been wanting to bring them to New Mexico for a long time and Tom Guralnick gave us the green light to mount the project.

The biggest snag in the realization of these concerts is that we were unaware of all the complications involved in acquiring a performance visa from the U.S. Embassy and the expenses were staggering — alas, dear Eva Lindal will not be flying in from Stockholm and will not join the trio of Payne Lindal Liebowitz, but you can certainly hear her on their CD from LineArtRecords.com

There will be Live in-studio guests on the KUNM Thursday & Friday jazz shows at noon. Kazzrie and Virg will join John Breckow on Friday for a look into Lennie Tristano, and talk about their own work after all these years. Everybody else will be on my show Thursday. I know Bill Payne is going to play some live clarinet, and possibly Charley and Don and Bill Chattin will join in with some Live music, as well. We’re still talking . . . .

It’s a little bit of New York in New Mexico. 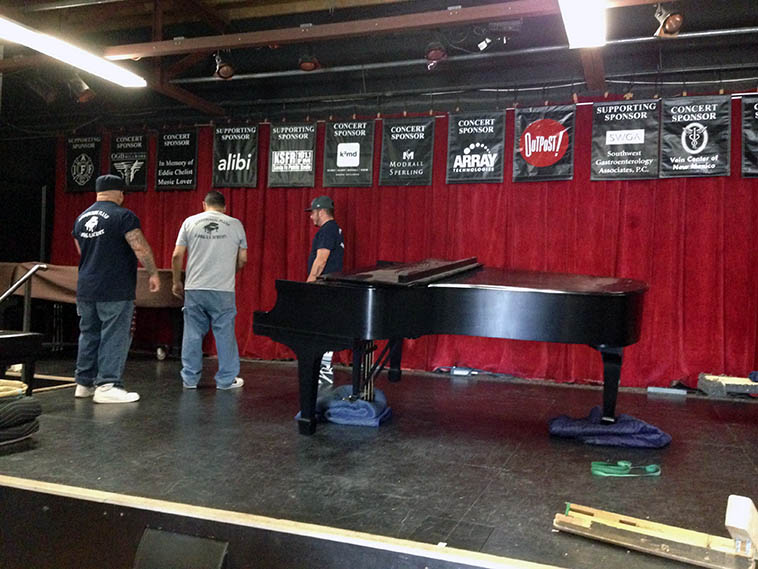 Moving day for the newly acquired Steinway B (1961) just reconditioned — Now, the Outpost has two Steinways, how cool is that. The other has been around for awhile, it’s a Steinway A (1927 German). (The B is seven foot  and the A is six foot four.) Virg and Kazzrie will perform duets on the second evening with these exceptional instruments. Cell phone photos by Tom Guralnick — April 25, 2o16. Trombonist/anthropologist/MacArthur Fellow Steve Feld’s parents sent the B from Philadelphia where it has resided since 1961 when they bought it new. 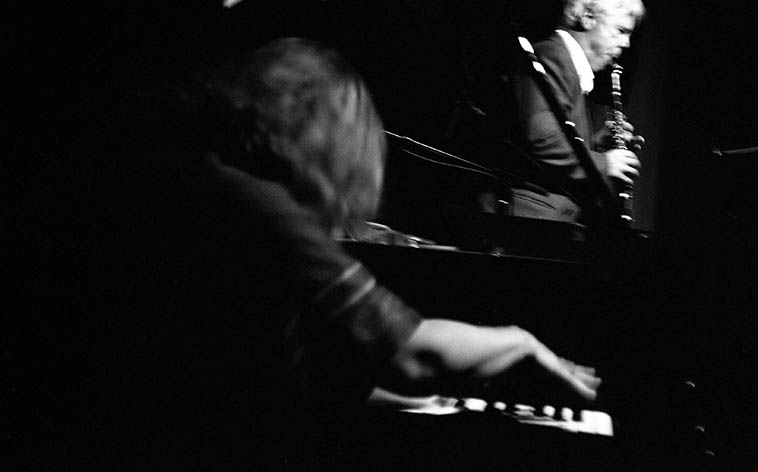 Connie Crothers and Bill Payne in duet at The Stone — September 17, 2009 — photo by Mark Weber 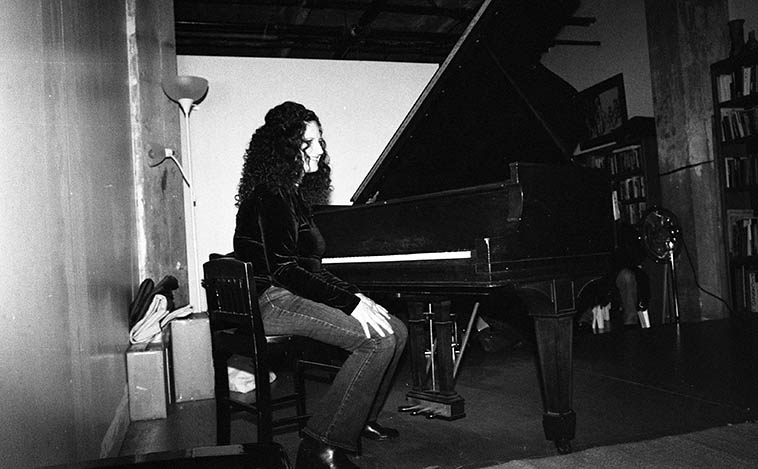 Carol Liebowitz with Connie’s piano — November 16, 2o14 — photo by Mark Weber — the trio of Payne Lindal Liebowitz is music that grows up out of itself, self-generated, spontaneous, in fact, you’ll not see sheet music in any form on stage or in the luggage of these musicians these two nights — this community of artists mostly learn by ear — probably the core would be feeling. As Lennie Tristano always said: The artist’s job is to feel. And with this as the vehicle to generate swing and long-line improvisation, to tell a story as the Master of Time & Space (Lester Young) would have it. I started to say that they are not constructions, but in a sense why not? My mind changes about this music, and I guess that’s part of the attraction, we don’t know what to expect. But the idea of constructions sticks with me, presently. One of the three ways I write poetry is construction (the other two being pure inspiration, when it occurs, and the other is atmospheric landscape). 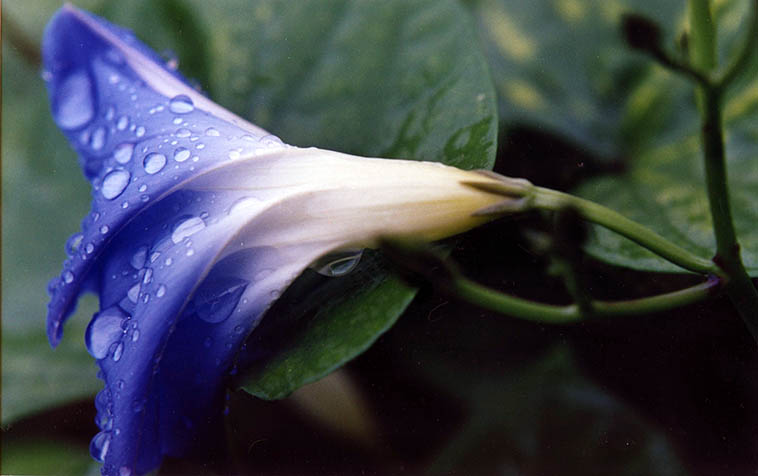 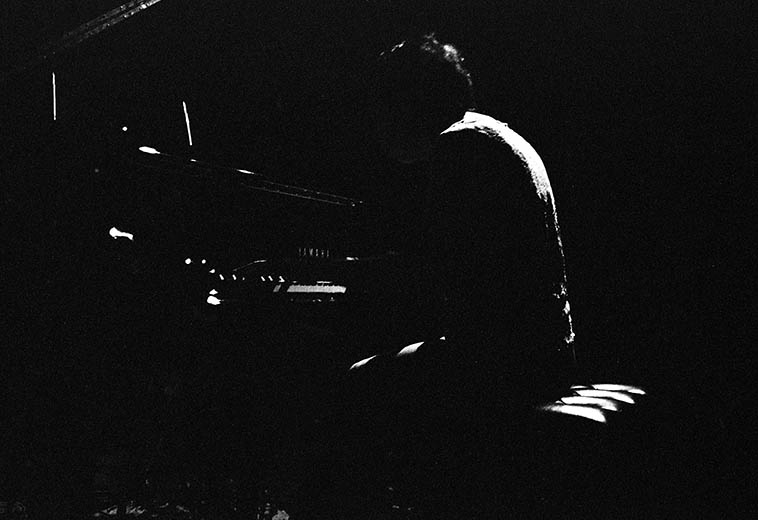 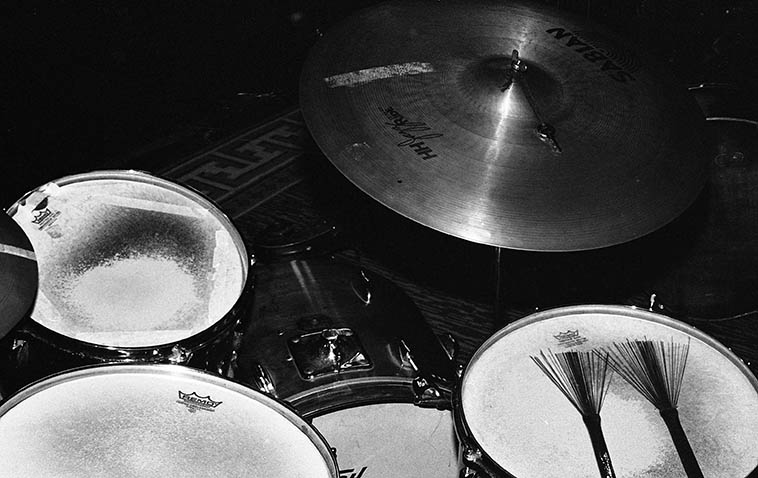 Bill Chattin’s ride cymbal with the keys (he uses keys on both his ride cymbals) — photo by Mark Weber — August 24, 2o14 — “Lennie (Tristano) actually suggested the idea of putting keys on a string on the ride cymbal — around 1972-3 — and I liked the change in sound and have stayed with it.” [4/24/2o16 email to MW] — “I have keys on both my ride and my other cymbal next to my hihat (what many would call a crash, and where a crash would traditionally be) so, my cymbal next to the hihat is more of a secondary ride” [email 4/25/2o16] —— I told him how disorienting it is to see Lenny White play because he’s a left-handed person who plays on a right-handed drum set-up. “Yes, I saw Lenny White years ago. He is a great drummer. I didn’t or don’t remember that his ride is on the left. Funny you should mention the left hand/right hand thing……I’m left handed! I play the drums strictly right handed. When I first started, age 9, I asked my drum teacher about left and right handed. He thought it best if I learned right handed because, back then, when you marched in a band, the drum was on the left side and naturally lent itself to being played with the left hand facing up and the right hand facing down. The drum was carried off the left hip and naturally slanted down from left to right. Now they stick the drum in front of them perfectly level and play with both hands down……Actually, I’m somewhat ambidextrous.” [email 4/25/2o16] ———– I asked Cal about this cymbal thing and he said the crash isn’t used that much in jazz, only in big bands, mostly for accents, because the crash has a fast decay, most jazz drummers use a variety of ride cymbals for that spang-a-lang. 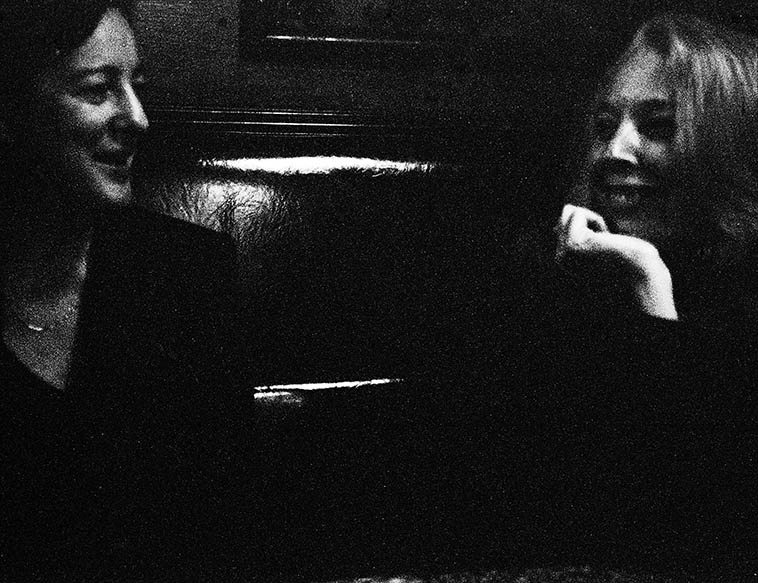 POEM For EVA Who Got HUNG-UP in governmental bureaucracy

It was not possible —-
Even living along the Tigris we
dared not venture over the mountains
to the land of Elamites in the east, all travel
was done by army,
borders are set
restrictions run up a flagpole,
movement between territories had to
be sanctioned, you asked permission on bended
knee from the fatted king, understandably,
because humans will take whatever they can,
you must keep their entry into your lands
provisional, even economies thrown out of balance
or diseases spread, maybe it was the Romans
who made it possible to travel farther than
your own valley? even feudalism had its place,
born out of safety, bonded together under a lord,
nowadays evil intentions carry bombs in secret
across borders, no wonder there have been so
many songs about finding peace in the valley beyond
there is so much distrust
it’s as if there can be no other way,
we live in a fallen world

*Dylan quote from song “When the Ship Comes In”

Bill Payne and saxophonist Jeff Newell — September 18, 2oo9 — Richard Tabnik had taken us to Roberto’s Winds on 46th Street to use one of the rehearsal rooms and Bill ran into his old friend Jeff — photo by Mark Weber — Bill Payne started with clarinet at age 10 in Harvey, Illinois, eventually studying with Don Kramer and Lewis Wyatt. He has lived most of his life on the road playing with theater companies, Broadway shows, big bands, and traveling circuses (if you come to the concert be sure and ask him about his eleven to thirteen (depending on how you count) years on the Ringling Brothers & Barnum & Bailey train). Bill cites meeting Connie Crothers as a major turning point in his musical life. 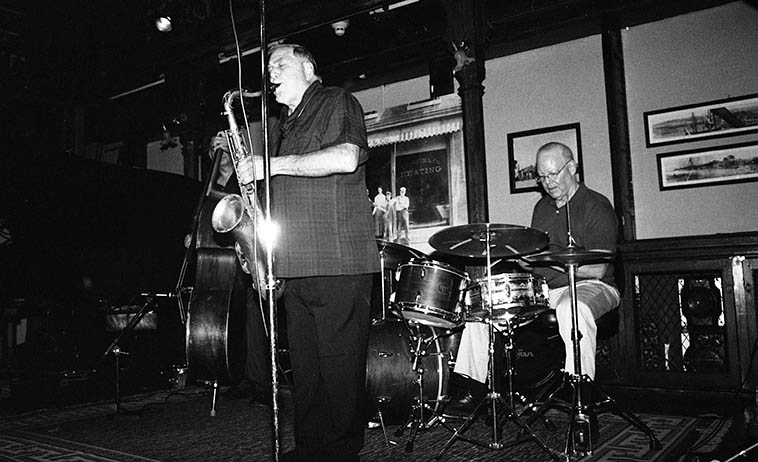 Kazzrie Jaxen Quartet: Charley Krachy (tenor), Don Messina (bass), Bill Chattin (drums), Kazzrie Jaxen (piano) — August 24, 2o14 — photo by Mark Weber — this music is purely honest, they will not put you on or emotionally manipulate you with grandstanding crescendos, or slow atmospheric long drawn-out build-ups of contrived appointments with a glorious payoff at the end, if you can wait it out (I guess that’s what you call a crescendo, eh?) You’ll not hear moaning & groaning from the pianist, histrionics, balderdash, psychological meltdowns from the stage, jive is foreign territory here, as is pretension, the drummer won’t holler “Yeh, man,” to the bass soloist signaling something mysterious has occurred but we in the audience are too unhip to know what just happened, this music brings you along with it or it just isn’t happening, you have to be there, this music includes the listener, already there, already in the moment, as they say. Anything else is foreign to these artists. 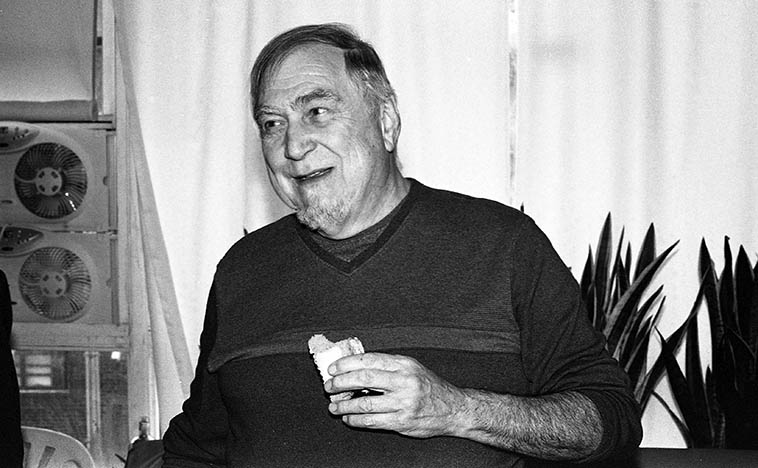 Charley Krachy and sustenance — photo by Mark Weber — October 30, 2o14 Brooklyn NY — Charley has never wavered from the Lestorian idea of telling a story with his tenor and he does it in those long mellow lines that follow the outline of the hills and trees at sunset of his upstate New York upbringing. New York is so full of interesting people and Charley is the craziest. He has been working with Kazzrie since the way back, maybe 30 years, as well as with Virg Dzurinko, Andy Fite, Michael Levy — the KJQuartet represented the music of Lennie Tristano at Dizzy’s Club Coca Cola last July (2o15) when Lennie was inducted into the Lincoln Center Ertegun Jazz Hall of Fame and you can see some of that perfomance on YouTube. NOTE what jazz scholar John Breckow says about Lennie:

“Right now I can say that for certain Lennie would have LOVED to be given a fair wage to play music under his own desired circumstances, out of the “nightclub” setting, so instead he went underground and created that “salon” setting and with that, was ahead of his time, predating most of the “loft” type new music adventurers like Sam Rivers. Kind of like a big WOW when you realize he had not performed in a nightclub since …what 1965-6….? Maybe you know…..? It says ALOT about his vision and his ability to nurture his art without compromise. I have always felt, especially after interacting with Warne who struggled so much with the commercial aspect of making music, and he felt his last vision was to form his own club/salon like Lennie…that…this was most likely far more “underground” than most of the music that attached itself to that moniker. It just was not very SEXY …because it required serious ear training, a developed instinct to interact in a way that would get you from point a to point b in an improvised encounter, and the obvious exclusion from the mainstream of performance, a large sacrifice. I keep thinking about how exciting and important the whole vision of playing improvised Jazz is when it is created by the musician spontaneously with the Tristano method………………………” [1/19/2o16 email to MW]

The mystery of all those notes:
…………How they interact:
……………………what densities, weight
the mystery of propulsion that
…………………..arises out of song
Bessie Smith chugging along like
………………………a freight train
huffing and puffing, hollering when
………………………………need be
I started to say: a skilled musician can
hold on to such propulsion, gracefully
but the magic is not the skill
the magic comes after skill: mastery, yes,
………………is part of it (one doesn’t want to
impose yourself until ready)
but, after all that, there is something
that has always been inside you
that takes over — 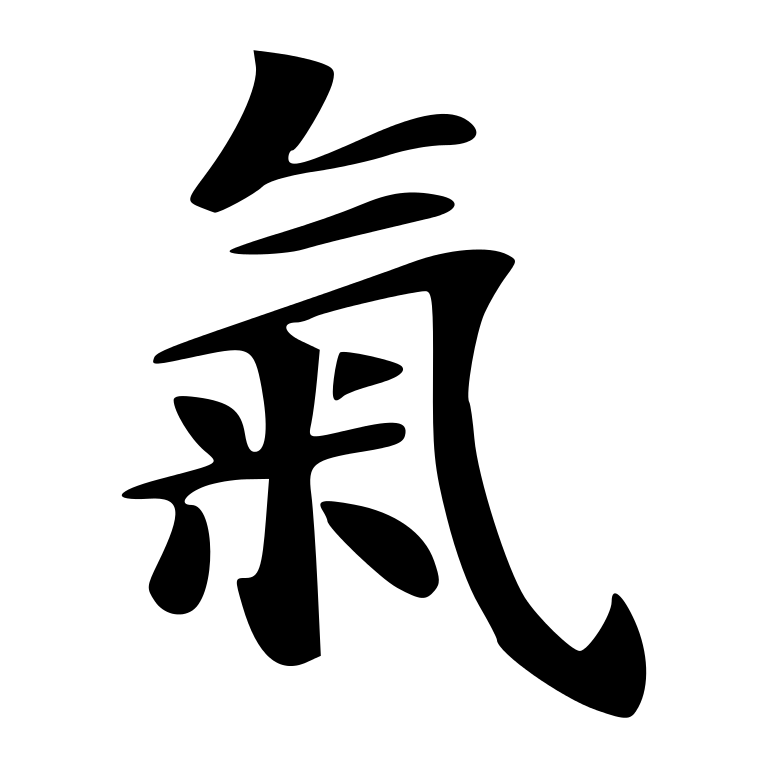 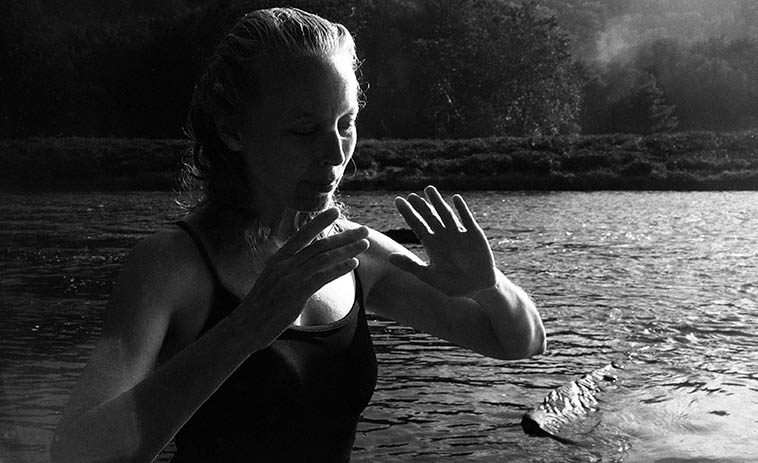 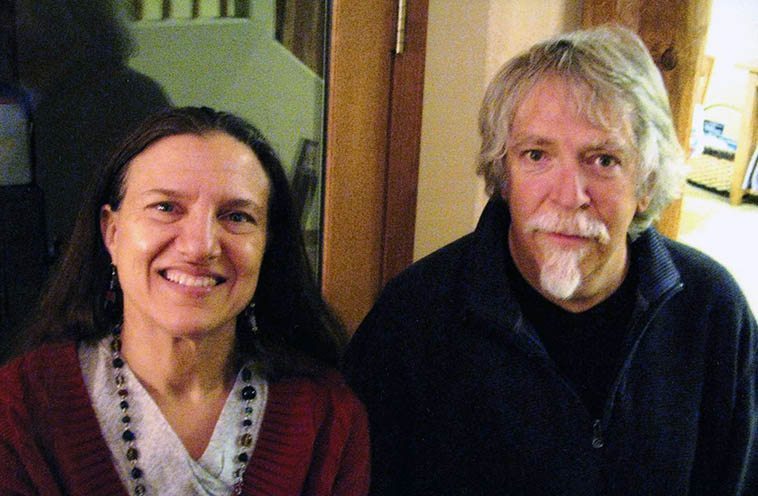 Janet Simon & Mark Weber — December 15, 2o12 photo by Karen Perez at Janet’s Christmas office party at High Finance Restaurant on top of Sandia Peak —— Like all of us, somewhere in our youth we have a transformative experience that sets us on our life path. Each of these friends had early epiphanies with music and all were on their instruments way before they were ten. As John Breckow points out:

“The fact that Lennie was so unconcerned with “success” or monetary recompense, in a sense, this was music that money could not buy. So, here we are: Celebrating the indelible legacy of modern jazz’s first true visionary Lennie Tristano, an interlace of improvised jazz and transitive verbs, a homage to the legendary studio salon sessions that nurtured musical adventure, originality, and the boundless energy and excitement of in-the-moment jazz improvisation.” [John Breckow–KUNM Friday jazz host].