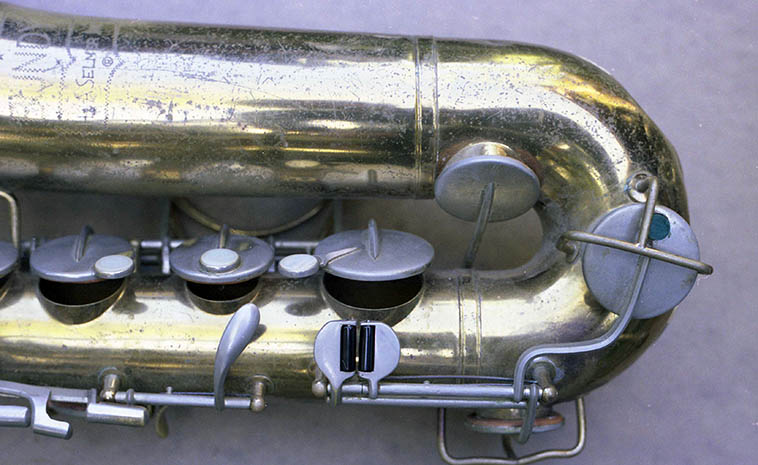 Some of mankind’s earliest surviving melodies are found in children’s lullabies, passed down from mother to child for thousands of years. Even the idea of poetry goes back a long ways to when just one word itself alone could evoke an entire story. The first music was probably rhythm, even as the idea of meter’d rhythm is an extremely sophisticated concept, our ancestors probably hooked up to their hearts. The earliest bone flute is only 43,000 years ago. Drumming predates that by a mile. To think that we mimicked birds at first is probably more revealing of a 20th century mind-set. I would caution too much emphasis up that fjord. 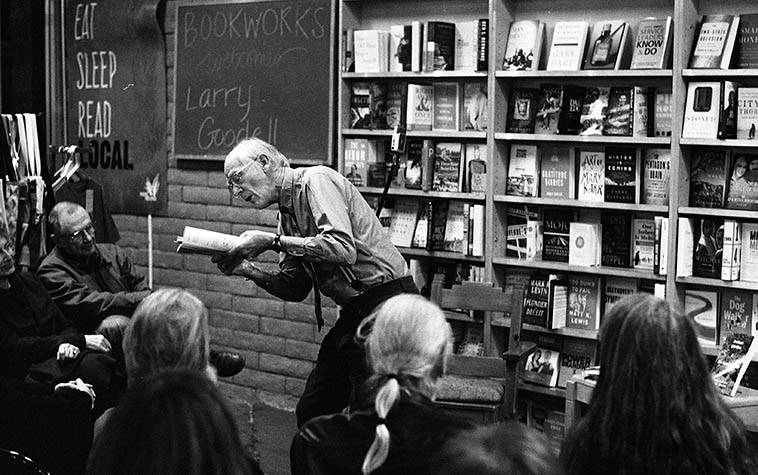 Larry Goodell poetry reading at Bookworks, Albuquerque — January 22, 2o16 — photo by Mark Weber — Larry will be our guest this day on the Thursday jazz show, it’s been awhile since we last had him on, so he’ll read an extra poem or two to make up for the space time absence 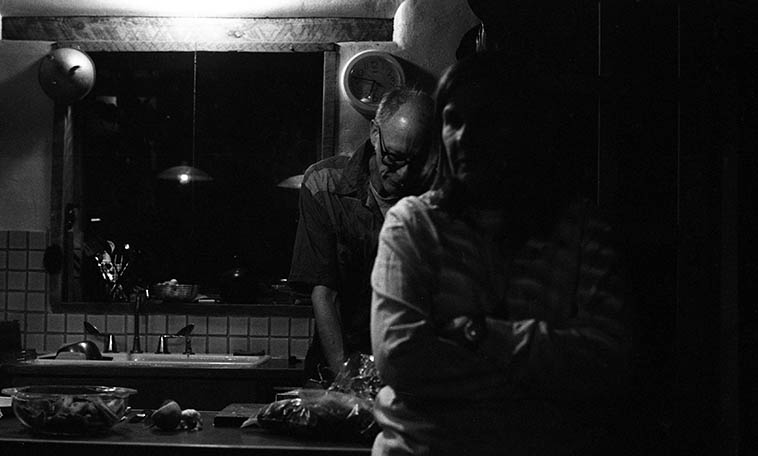 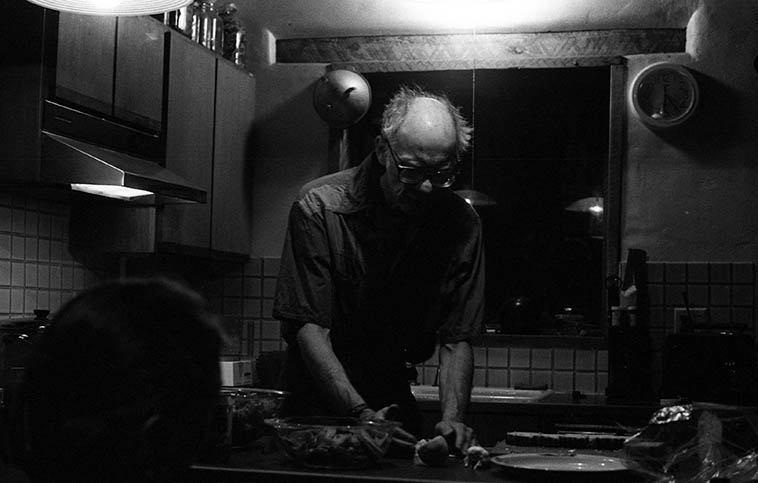 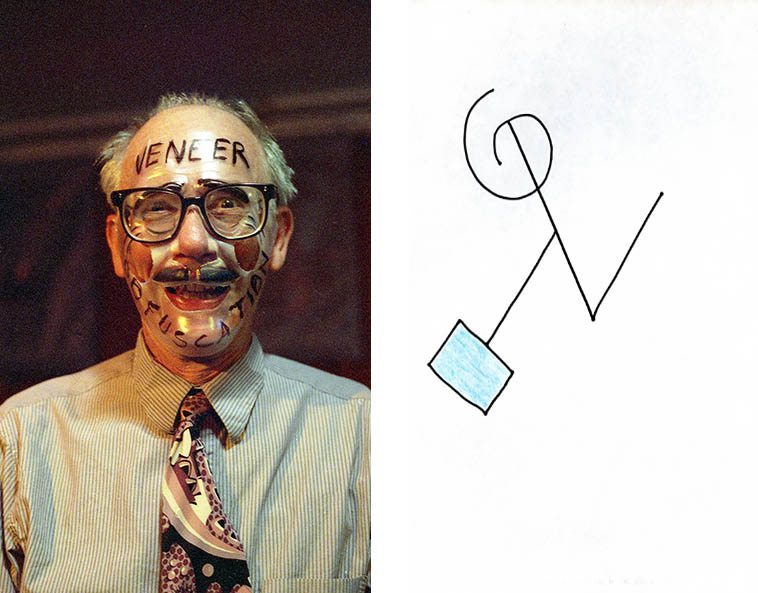 There’s performance poets and then there’s performance poets and then there’s Larry Goodell. When I first encountered Larry in action in the early 90s (when we found ourselves in New Mexico) he struck me immediately as the real deal and purely authentic and in the arena of “performance poets” Larry is the top cat. One night at Silva’s Saloon in Bernalillo we watched him reading a poem writhing and bending clear over backwards squirming on a table like the words were crawling all over him like ants. —- Photo of Larry Goodell by Mark Weber — April 28, 1995 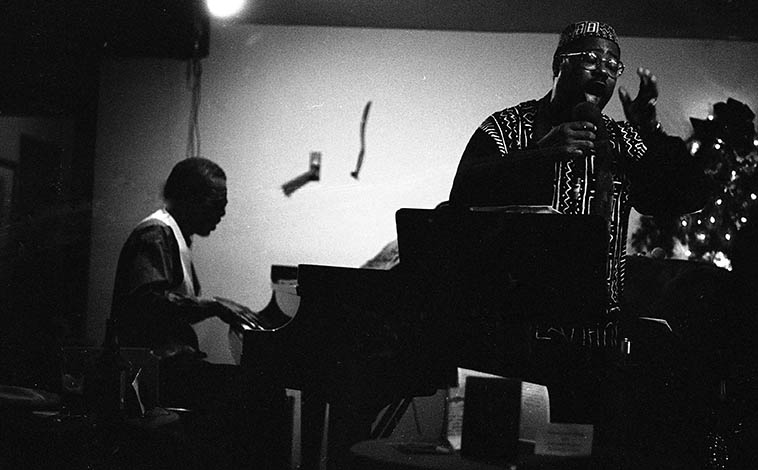 Horace Tapscott & Dwight Trible at Catalina’s, Hollywood, California — December 21 or 22, 1995 — photo by Mark Weber — These nights were professionally recorded and have never been released — Horace brought an octet for the occasion — I was in California visiting, having moved away in 1986 and hadn’t seen Horace in all that time — When he spotted me in the audience, he got off the piano walked over to my table and said “You’re busted,” laughing and we both laughed and I said, “Uh, Horace, you know the tapes are running.” 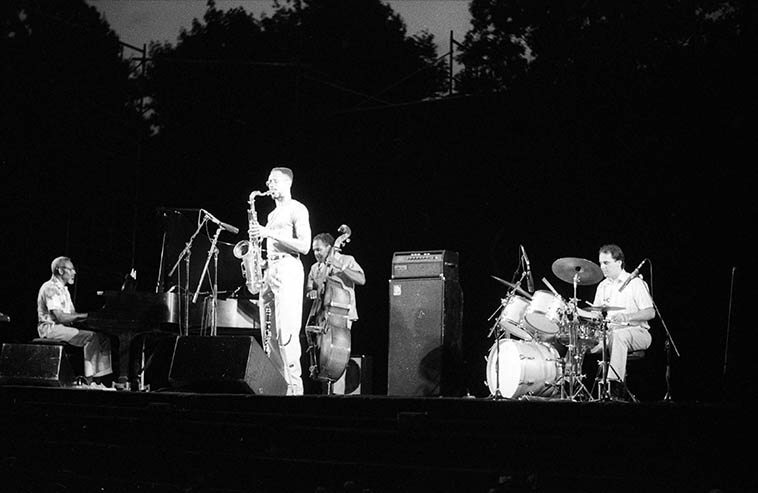 The three years we lived in Cleveland there’d be summer evening concerts in Cain Park in Cleveland Heights — This is local saxophonist Bud Revels (who grew up in Cleveland but I believe was a New Yorker by this time): Bud Revels Quartet: Jesse Dandy, bass; Skeets Ross, piano; Richard Maslach, drums; and Bruce Bud Revels, clarinet & tenor saxophone — They opened for the James Moody Quartet — June 25, 1988 — photo by Mark Weber — Mr Revels only album was produced by his Berklee classmate Greg Osby and came out in 1991 on Enja called SURVIVORS — From what I can gather off the web, Revels is still in Brooklyn and has set the reeds aside and has switched to piano and then to Hammond B3 — We’ll listen to some of his music this day, his Cain Park outing was impressive — The only other recording I can find with Bud Revels was as a member of Jaki Byard’s Apollo Stompers (1988) 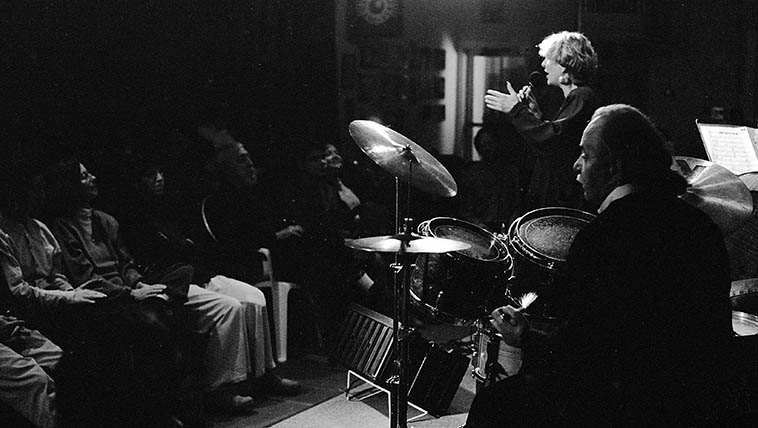 Stephanie Haynes backed by Dave Mackay, piano; Jack Prather, bass; Pete Amahl, drums, at old Outpost — November 20, 1995 — Albuquerque — photo by Mark Weber —– You can see Connie Figueroa and his son the pianist Steve in the front row — Connie’s bass was donated to the Outpost after he passed away March of 1996 — that’s the bass that worked for decades on jobs around New Mexico, and has now been played by hundreds of visiting bass players to New Mexico performing at the Outpost Performance Space 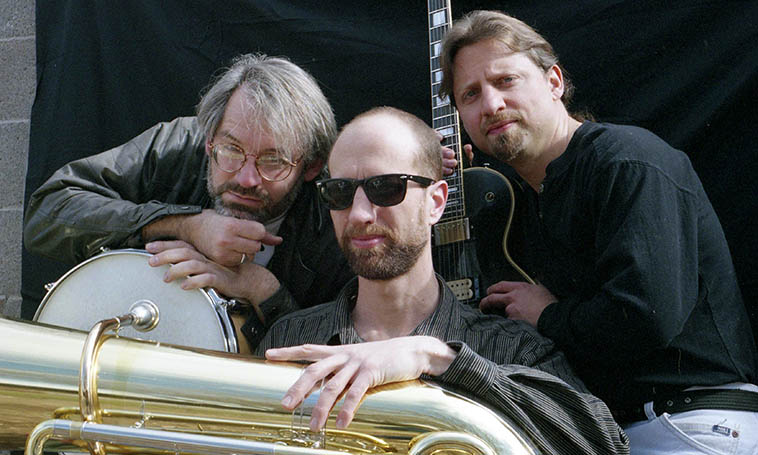 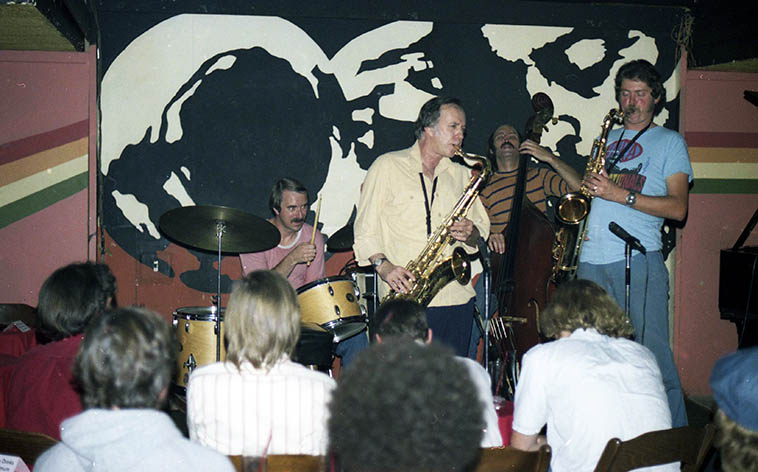 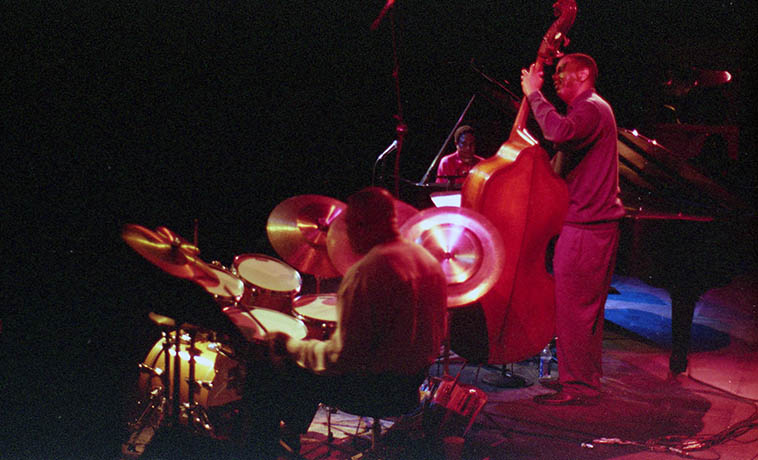 Geri Allen Trio — Check out Billy Hart’s cymbals — March 20, 2002 — Taos, New Mexico — photo by Mark Weber — That was a fun trip — I was hired to drive the trio on this tour of Northern New Mexico and Colorado — Geri on piano — Robert Hurst, bass — Billy brought his own cymbals but was at the mercy of whatever drumset was provided, on some of the gigs we cobbled the drumset together from several different kits, and we’d spend the days with Billy riding shotgun talking jazz jazz jazz we really got some history those eight days . . . . . 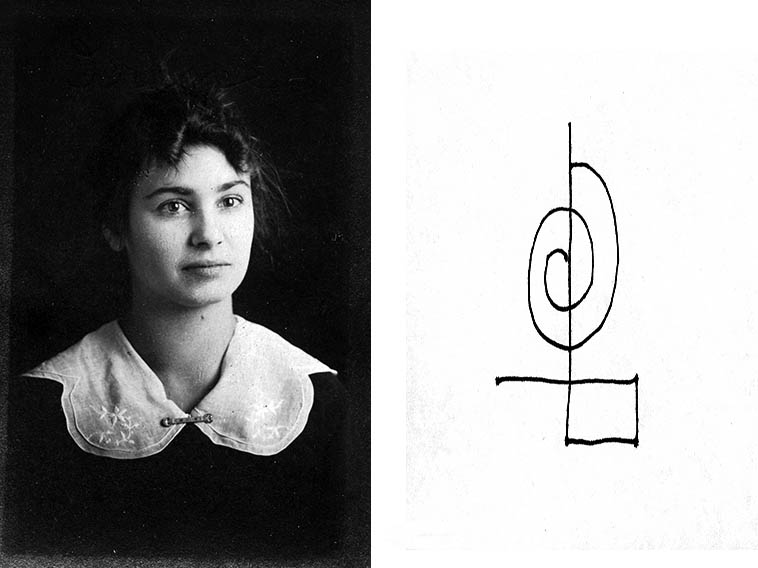 Irene Seaman — 1916 — Newton, Kansas — My Grandma Matthew — She was a state champion typist of Kansas and graduated high school, as did her 3 siblings, my aunts Fontella and Eula, and Uncle Gleason —- Her mother migrated to Kansas in a Conestoga Wagon (my great Grandma Seaman, lived to age 99 and was part of the family that raised me) –They were blown out of Kansas during the Dust Bowl, having hung on till the very last — 1940 — when they gave up the farm, bought a Plymouth and made it out to California when my dad was eleven — Irene was a proofreader for the Progress Bulletin, out of Pomona, California, and I used to visit when I was small, this was back in the hot lead typesetting days, and I’d watch those big machines churning out newspapers — I still have her typewriter and her proofreader’s manual (Irene Matthew 1899-1996) 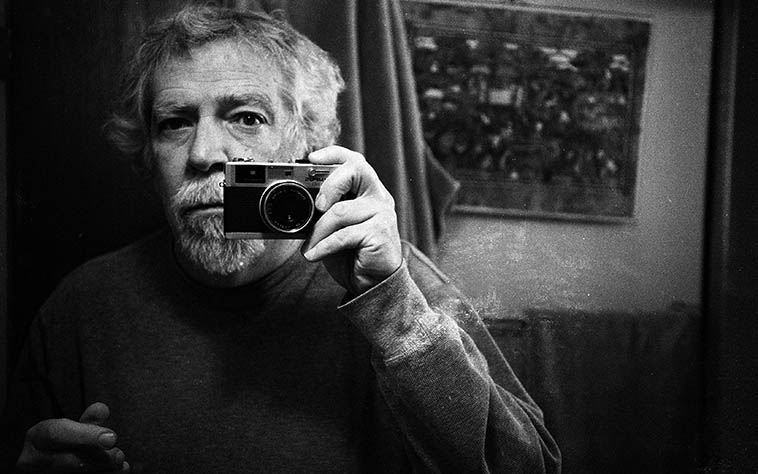 Is there a resemblance? Grandson and paternal grandmother — I don’t have an over-riding desire to take pictures of myself, it’s just that when I’m about to take a gang of Tri-X to be developed there’ll sometimes be one or two shots left on one of the cameras so I’ll step into the bathroom and shoot myself in the mirror ———- Tom Guralnick gave me that camera — The Olympus 35RC was the it camera of the early 70s as it was so compact and small for those days — It’s a fixed-lens rangefinder (as opposed to an SLR) —- a great camera, I call it the Japanese Leica (Leica’s are the Rolls Royce of rangefinders) — Self-portrait January 20, 2o16 — When Tom called and asked if I wanted this baby, I said: Tom, look out your kitchen window, do you see that speck on the horizon, that’s me running to your house before you change your mind, Hell yeh, I want that camera!