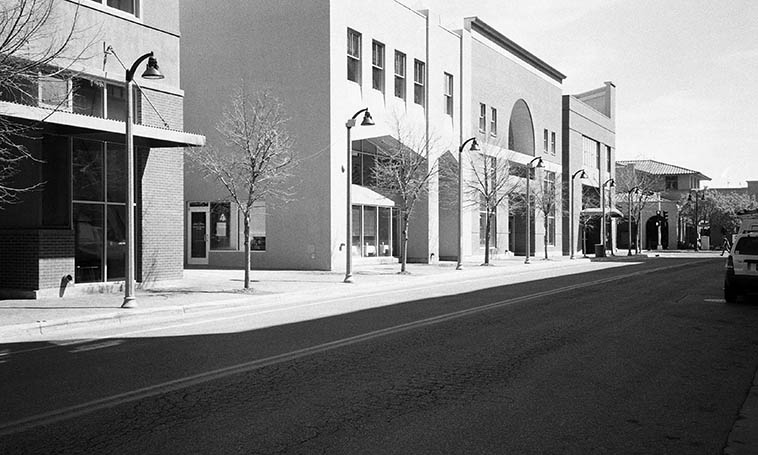 Hallowed ground: In that vacant spot between buildings was 115 1/2 West Gold where the Master of Time & Space Lester Young’s father Billy opened his Young’s Music Store 1928-1929 the years Lester was playing the territories with Art Bronson — Lester was in & out of Albuquerque 1928-1930 — At age 19 he married his Beatrice here in Albuquerque on February 23, 1930 (I’ve always thought it telling that Dante’s muse was Beatrice) — Shortly thereafter Beatrice & Lester moved on to Minneapolis and Lester then joined the Blue Devils and into history — At the end of the street is the train station/bus depot on 1st Street and the nearby environs where the Black train porters settled, the population of Blacks in Albuquerque 1930 census was 441 out of a total population of 26,570 (*from Douglas Henry Daniels bio on Lester) And from Rex Stewart’s book we learn that when Ben Webster lived with the Young family and played in the family band (Billy got Ben off piano and onto tenor and taught him to read) that summer of probably 1930 while the gang was swimming in the Rio Grande that Lester would have drowned if it wasn’t for Ben saving him from an early curtain. (Albuquerque didn’t start growing until after WWII.)

I remember one time at the Albuquerque Museum on a gig backing a singer Lewis Winn went to the mike as he was changing guitars and said, “Every once in awhile a man must strap on a Stratocaster” as he put away his Gibson. He also surprised me many years ago (20?) when I had stumbled upon the recordings of Okie madman bop western swing guitar speed demon Jimmie Rivers who was active in the crazy Okie bars of California in the early 60s — Lewis was already down on Jimmie Rivers, way ahead of me. Lewis Winn will be our guest on the Thursday Jazz Radio Show today and he’s bringing his “experimental group,” a trio that he’s been workshopping for five years (back when I was momentarily a TV host for a cable music show Lewis brought this trio — I’ve never seen the footage, not sure they aired it, maybe Lewis fried their system? — we seem to recall it was 2o12). This trio has a gig for the New Mexico Jazz Workshop at Albuquerque Museum Amphitheater Saturday July 23 so this will be a little taste of what’s to come. I asked Lewis what guitars he was using: “Still undecided on weapons for this concert but for the air I’ll prolly bring an archtop.” Lewis’s first guitar was a Stella Harmony, growing up in Montana. His bio: “Born in McCall, Idaho, Sept 18, 1955. We moved to various places in Utah and Wyoming for the next few years then several years in Ogden, Utah, until finally moving to Missoula in ’66.” The trio is Jon McMillan, bass, and John Bartlit, drums, a solid outfit, both veterans of the New Mexico scene. Lewis moved to New Mexico in 1980, lived the first three years in Santa Fe, and has been in Albuquerque ever since. They will be performing Live on the KUNM radio in the control room with yours truly at the dials, so don’t bother telephoning not unless you want to hear me talking on the telephone while they’re playing. It could be like a modernist thing: one-sided telephone conversation versus jamming trio. I asked Lewis what the compositional approaches were for the trio and how much improvisation figures into the mix: “We blow without parameters or discussion and we compose, that’s what we do.” 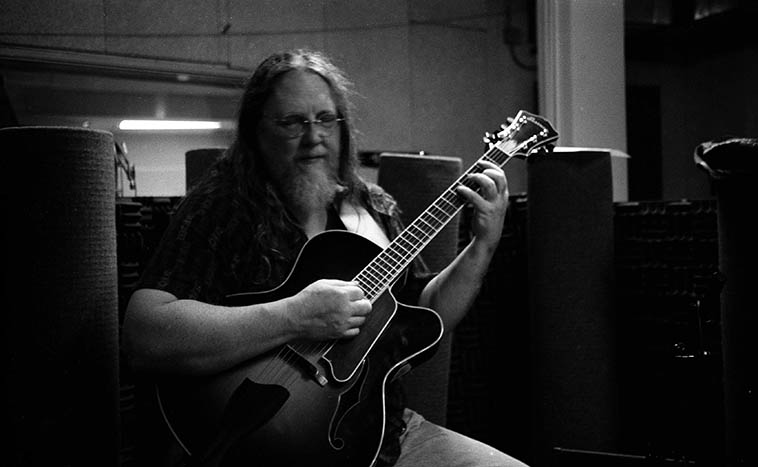 Lewis Winn solo session at KUNM Studio A — March 28, 2o11 — I had been after Lewis to commit to a solo session for a couple years, and he wasn’t exactly against the notion, but it took some persistence (that’s what producers do best) because, as Lewis explains, he is more accustomed to interacting with other musicians than playing solo, but this session produced masterful renditions of jazz standards — photo by Mark Weber — Lewis is playing his Eastman 805 w/ a new Quilter amp 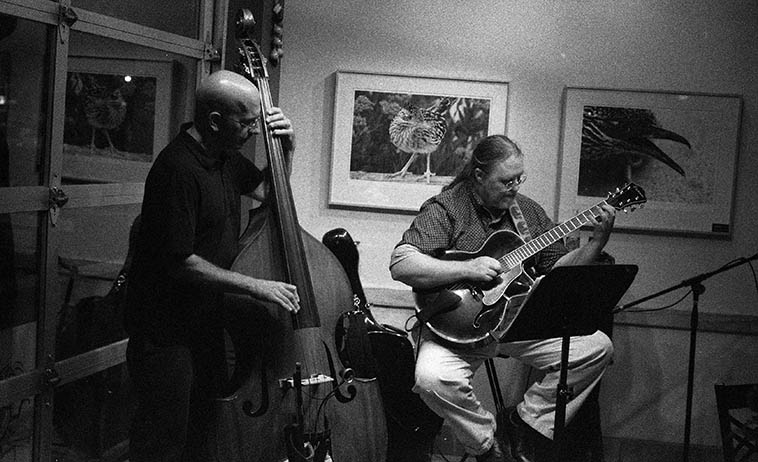 Michael Olivola and Lewis Winn gig on Central Avenue (Rt.66) at Bumblebee Bob’s Baja Grill in Albuquerque — July 25, 2008 — photo by Mark Weber —- When saxophonist Nick Lyons was visiting from NYC I took him to hear the Patti Littlefield Group and afterwards I said What do you think? and he said “Who’s that guitarist?” and I said That’s Lewis Winn, too much, huh? and Nick said, “Yeh, wow, very intuitional.” 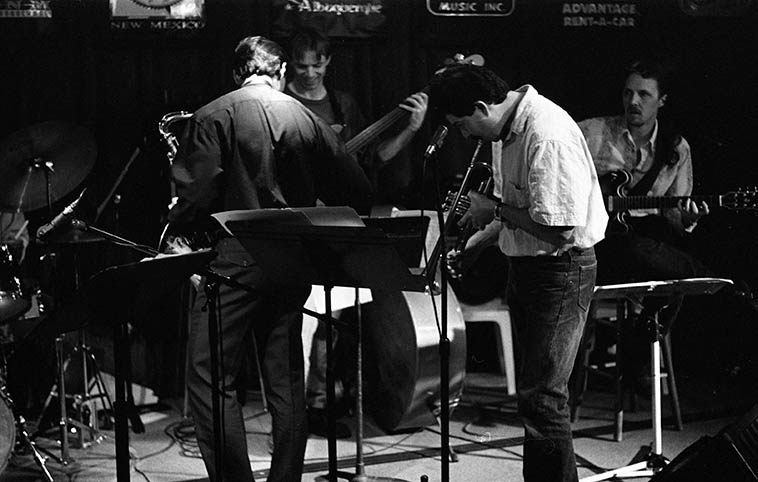 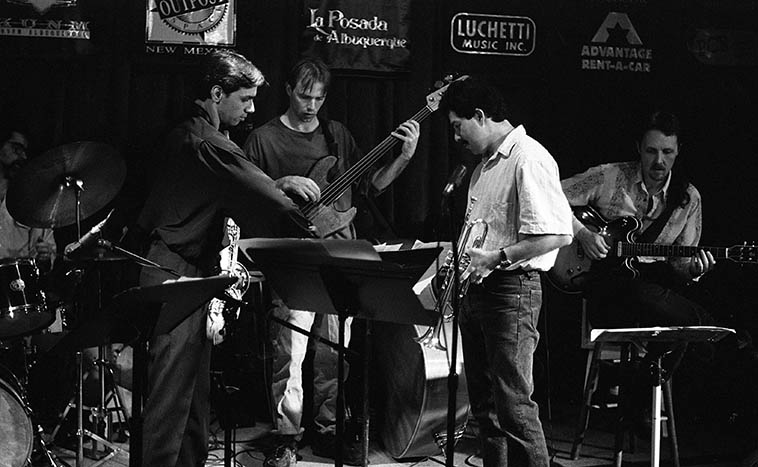 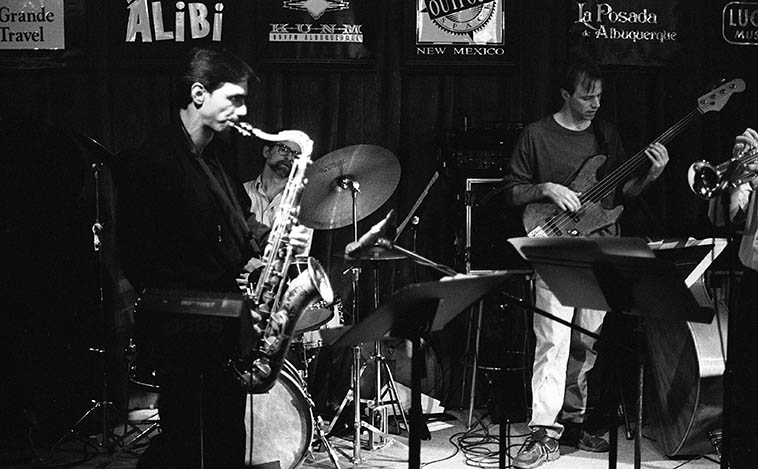 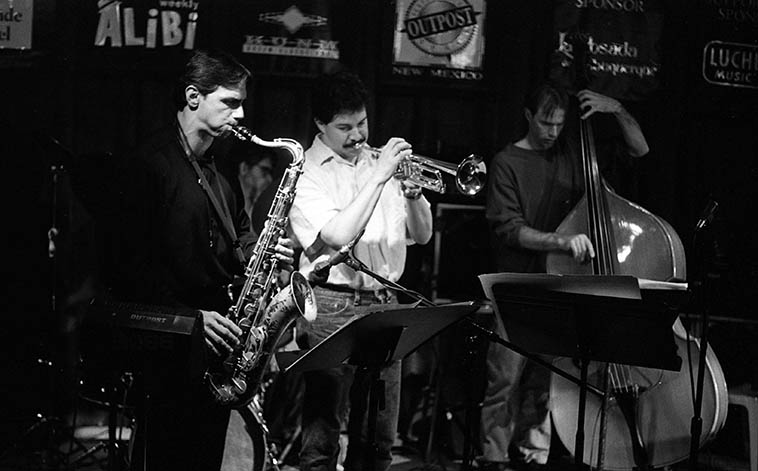 Kanoa Kaluhiwa Quintet — December 11, 1995 — photo by Mark Weber — These guys are still active on the New Mexico scene in all kinds of musical situations 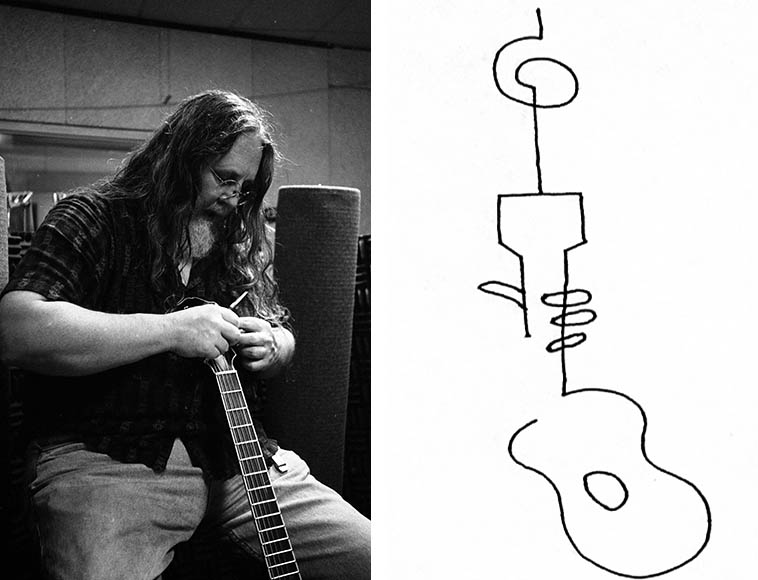 When you think of the underlying forces and tidal movements that shape a guitarist like Lewis, as with any artist, it can be complicated, all the developments and changes in society that move at different rates, the interactions, discontinuities, wyrd, economic considerations, quantification is so nearly impossible that it would be easier to believe in astrology, even as the moon is certainly an influence — When I was born (1953) the shadow of the great cataclysm known as World War 2 was only eight years past and this shadow influenced much, having come on the heels of the Dust Bowl Migration and the Great Depression, the shadow was cast large, then there’s the population explosion now known as the Baby Boom which rode a wave of optimism and social change — Still, despite the complexities of understanding an artist’s place in all this, you could narrow it down in Lewis’s case to: The Sixties, where it seemed possibilities were at every turn, endless things to investigate, the Era of LP vinyl record, innocence, we were gloriously naive — A couple years ago I mentioned something to Lewis about the Allman Brothers and by way of response he pulled out his compact phone and played “Trouble No More” that he keeps close, as a touchstone, to remind him how the world began —- Photo & line drawing by Mark Weber — March 28, 2o11 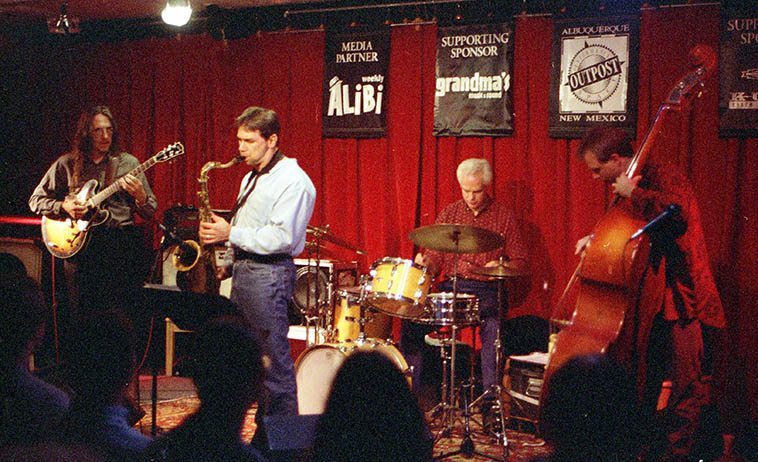 Jon Gagan Quartet: Lewis Winn, guitar; Andrew Poling, drums; Jan Gagan, bass; Kanoa Kaluhiwa (tenor) — November 9, 1998 Outpost — photo by Mark Weber — It would be interesting to know, after all the years Lewis has been studying guitar and teaching guitar if he has winnowed down the guitarists that have had the most impact on him — who are his pantheon? 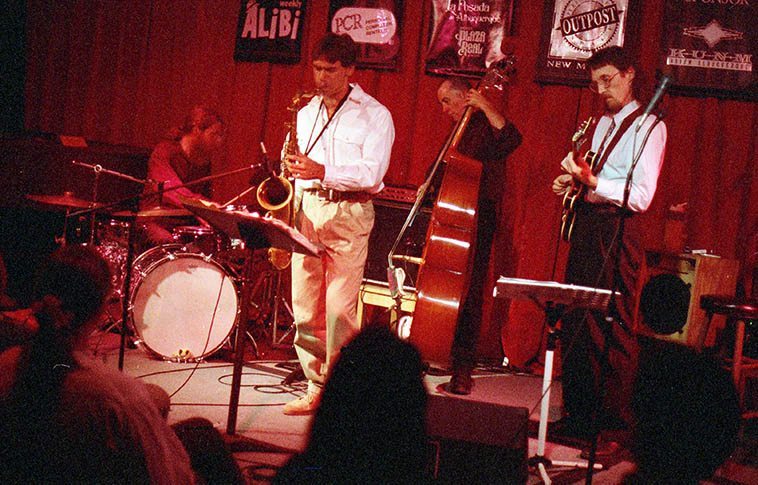 Real Time Quartet at old Outpost — October 7, 1996 — Kanoa Kaluhiwa (tenor), John Bartlit (drums), David Parlato (subbing on bass for Mark Tatum), Lewis Winn (guitar) — photo by Mark Weber (Cal Haines was the original drummer in this band but he moved to Southern California just before this photo was taken, to take a job with Rockwell in Newport Beach for ten years) Lewis is one of those guys if the note he’s looking for isn’t on the guitar he just reaches up in the middle of a solo and de-tunes until he finds it (usually a low note): blarng, blaaaaarng, narng. He’s also the guy that told me that our front porch wind chimes is Gmaj7+13dim4 or some such chord (I forgot which) Of all the musicians that have been in & out of Studio 725 he’s the only one who has point that out. 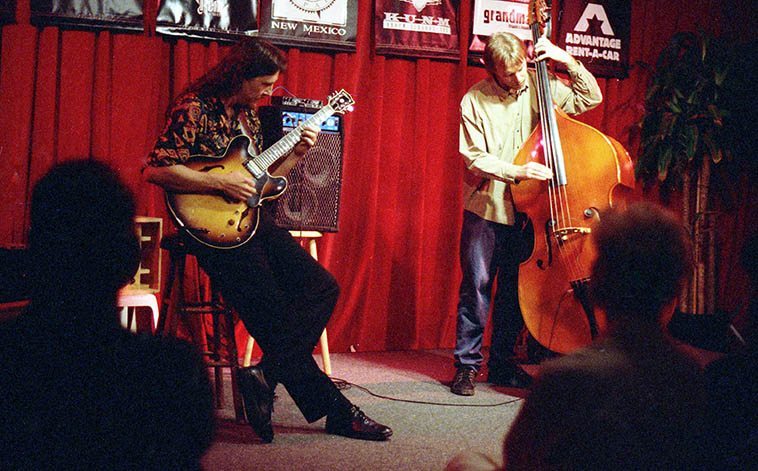 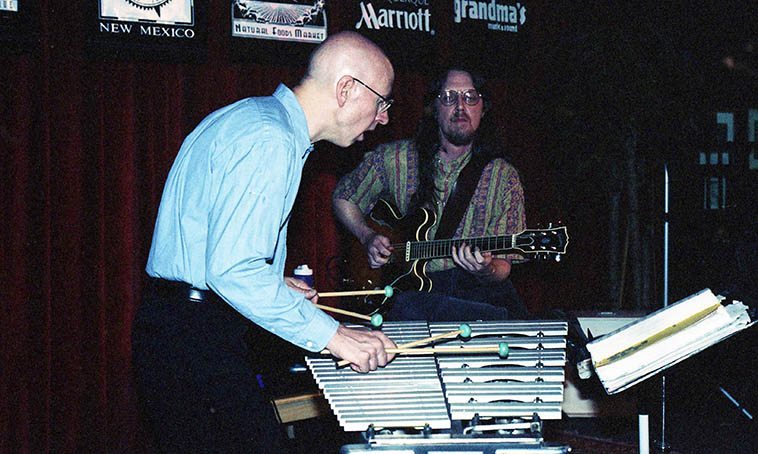 Chris Allen on his Musser vibraphone and Lewis Winn on his 1958 Gibson ES-335TD — May 1, 1998 Outpost Performance Space, Albuquerque — photo by Mark Weber 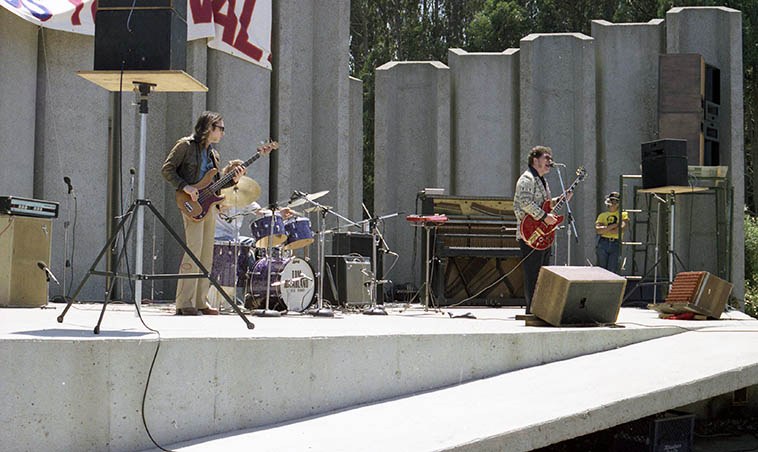 Another great guitarist: Tom McFarland Blues Band — August 13, 1977 — McLaren Park, San Francisco Blues Festival — photo by Mark Weber — This concert knocked me out, and then the same year he came through Los Angeles with Otis Rush and killed me, again — These years he was based out of Oakland, California, but had grown up in Oregon and had done a lot of playing in Portland and Seattle before moving down to Frisco in 1973 — died age 59 on September 3, 2004 — His cousin was Gary McFarland the arranger who also died young in a mishap — This concert he played such soulful slowed-down versions of songs that came out the next year on his only album TRAVELIN’ WITH THE BLUES (Arhoolie) 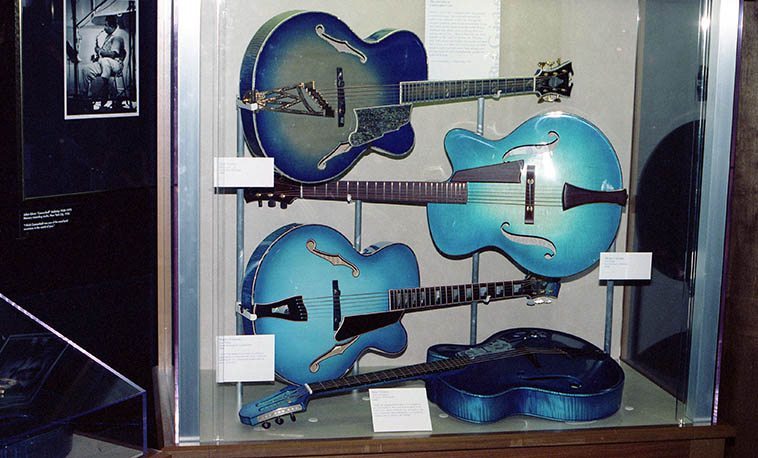 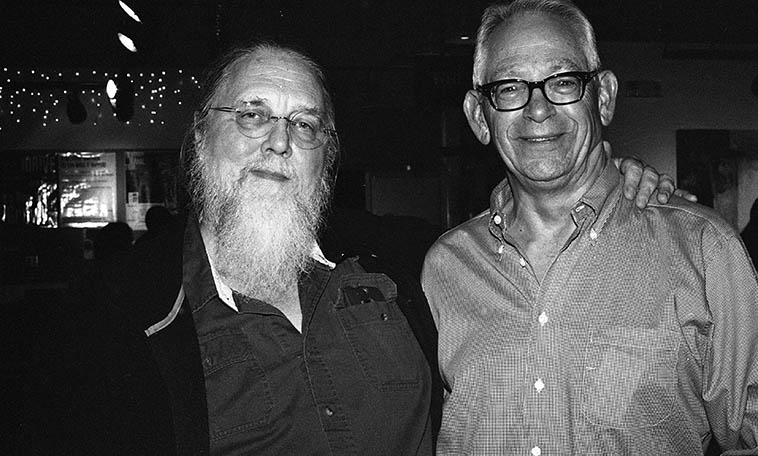 Who are these two old geezers? Well, that’s Lewis Winn getting in touch with his inner Cro-Magnon and the other guy is esteemed member of Outpost Board of Directors Lynn Slade — April 9, 2015 — photo by Mark Weber