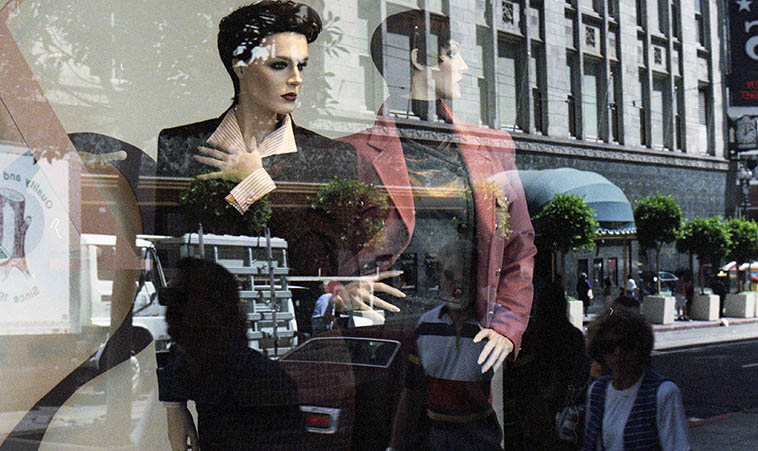 I think it was Eugene Atget who first discovered the metaphysical imagery of window reflections,  shooting in Paris in the 1920s —- It’s almost too easy, and every shot comes out a masterpiece, I just leaned up against a wall in front of Neiman Marcus at noon in downtown San Francisco and fired off two dozen shots, all of them fantastic, of the fantastic, other-worldly — Photo by Mark Weber, August 12, 1994

COOL & HOW TO KEEP IT

The word cool has many meanings — in jazz, one of the great lessons one learns as a player and as a listener is how to keep your cool, don’t rush things, don’t jump the gun — the roof could be caving in, but keep cool — Barbarians are at the gates, but, keep your cool, no amount of hollering is going to help you — I was listening to a Gerry Mulligan nonet the other day that was so complex and delicate that I wondered how many takes it took to get this exceptional nearly six minute version of “All the Things,” it was staggering, and each of the players had to be completely relaxed or it wasn’t going to work, and they were, so amazing — This could not have been done without cool — Lester Young had cool, I think he taught everyone about it, completely floating through the world, playing your part . . . . . 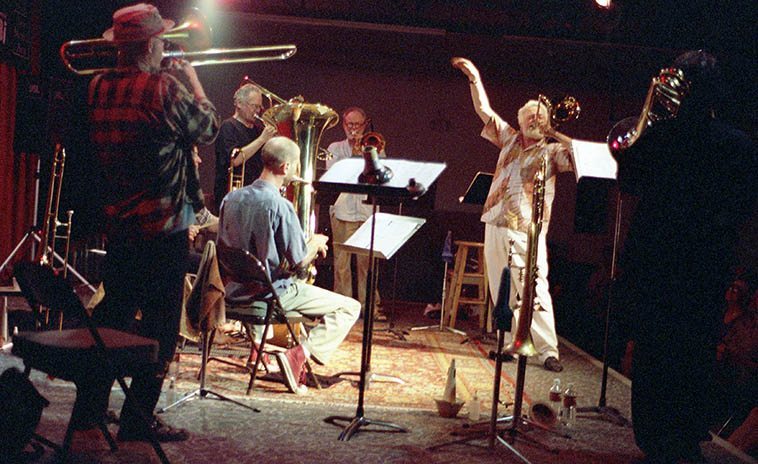 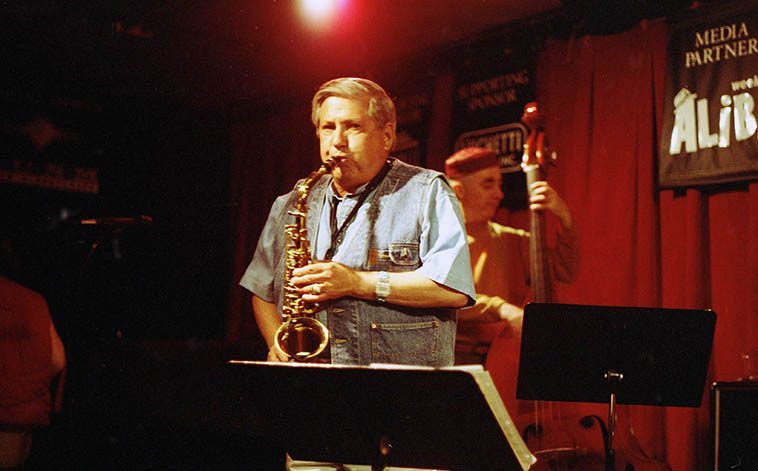 Dick Trask (January 2, 1931 – October 15, 2011) was on the scene in Albuquerque since 1973 — By day he worked as an aerospace consultant, having retired from the Dept of Defense, and posts at Kirkland AFB (Albuquerque) and by night he was a jazzman — He was a lot of fun, we miss him, and one of the last with a living memory of Charlie Parker, having grown up in New York, Dick spent his halcyon days on 52nd Street, I loved to warm to his stories of Bird — photo by Mark Weber — March 31, 1997 at the Outpost (David Parlato, bass) 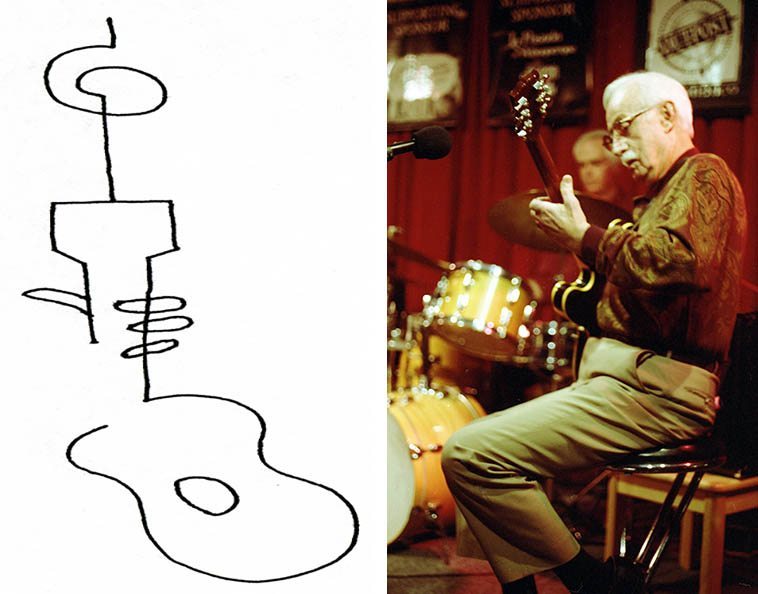 Clyde Hankins (1918 – Dec. 18, 2oo6) Born in Texas, grew up in San Diego, worked with Johnny Richards (!) in L.A., lived & played in Albuquerque since early 60s — line drawing & photo by Mark Weber — March 31, 1997 — Seems my conversations with Clyde always revolved around how much he loved to operate big earth movers and Catapillar D9s — He was a lightning fast guitarist —- If you know only one thing about Johnny Richards, you know he wrote the masterpiece CUBAN FIRE! for Kenton in 1956 — an indispensable jazz album of the West Coast. 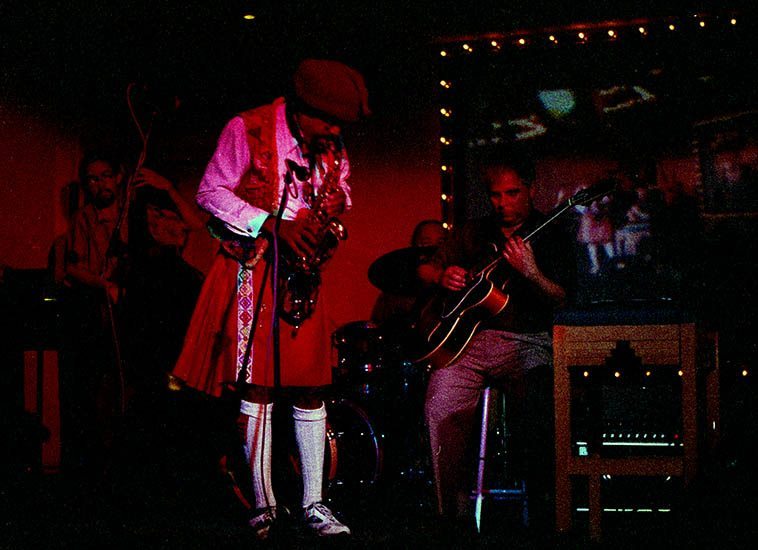 Rufus Harley, the jazz bagpiper in New Mexico — Rufus has made records with Sonny Rollins, Herbie Mann, Sonny Stitt, and several records of his own on Atlantic —- This quartet: Justin Bransford, bass; Pete Amahl, drums; Tony Cesarano, guitar — May 27, 1998 photo by Mark Weber 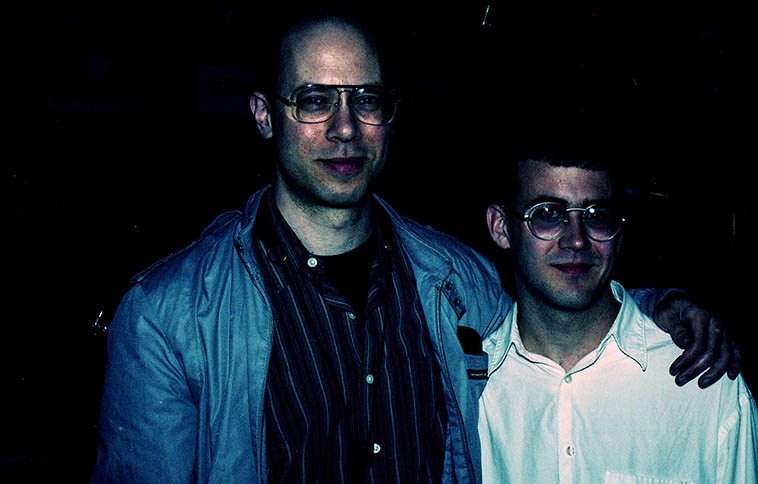 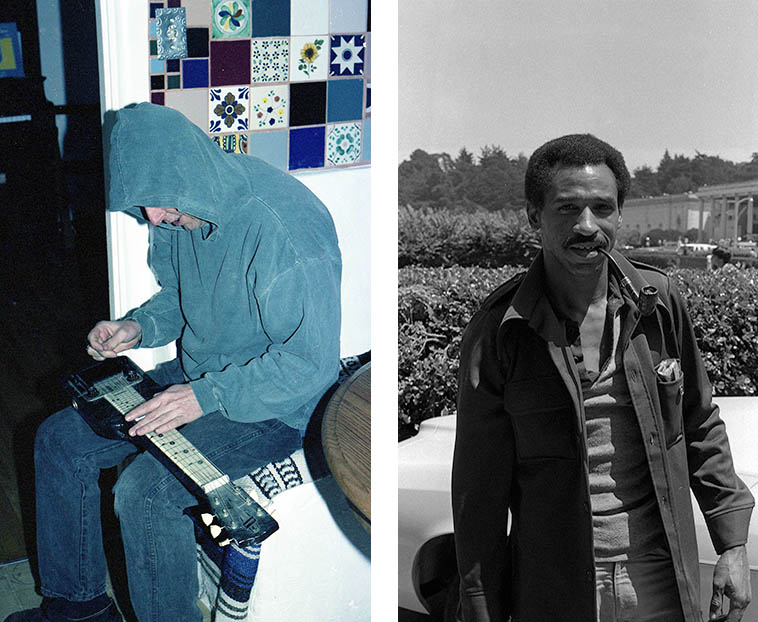 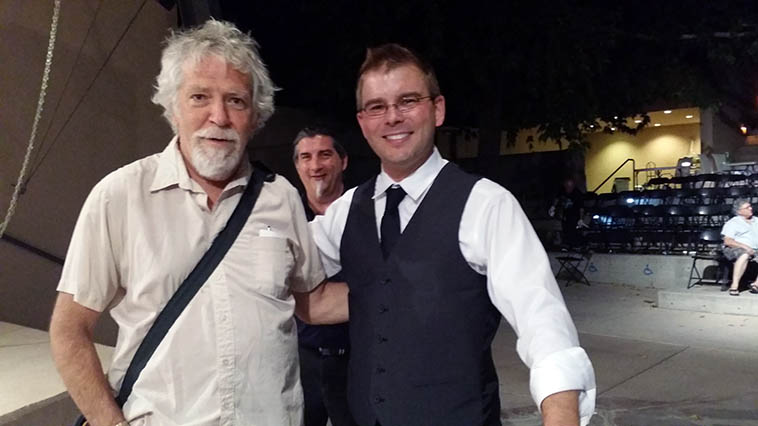 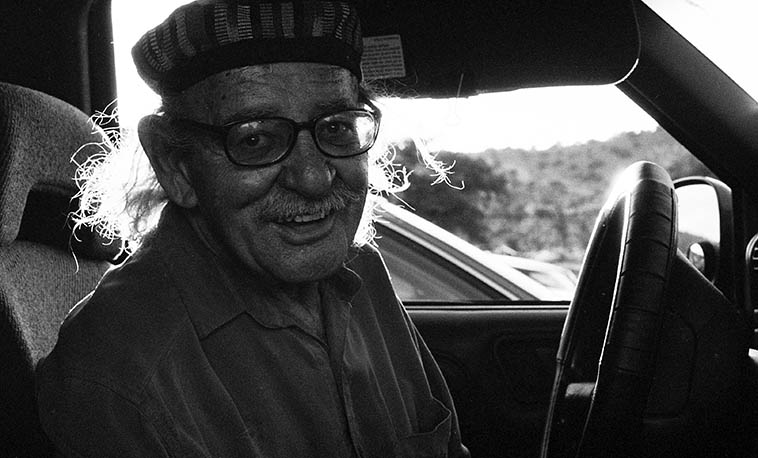 Pete Amahl, on the mend, I was so glad to see him, recently emerged from rehab having weathered a cardiac event earlier this year —- Pete’s a road warrior, one of those behind-the-scenes anonymous cats that puts the music under the big names all over the country, he’s used New Mexico as home base since 1972 (he’s from Massachusetts) living way out of town in the wilderness —- I remember when I first got here (1991) the story was of this drummer living in a trailer or a camper out in Cerrillos (Cerrillos is sorta between Santa Fe and Albuquerque, you’ve seen it many times before if you watch cowboy movies —- only eccentrics and madmen and outlaws live out there, like Kell Robertson —- all of us nervous people stick to Santa Fe and Albuquerque with our plague of barking dogs to protect us) —- Pete would use a Taos Drum turned sideways for his kick (ceremonial drum made from cottonwood at Taos Pueblo) —- The greatest news is that he has a radio show on the little Madrid station KMRD Mondays 5-7pm called The Amaral Market with Pete Amahl (Madrid is near Cerrillos in the hills, old mining town turned ghost town turned artists hideaway, and outlaw hideout, dangerous out there) —- And lest we forget, Pete was one of the founding fathers of the New Mexico Jazz Workshop when it sparked off in 1976 —- Someday I want to hear more about the year or two he left the road and dropped out of society and lived the life of a contemplative sitting next to a lake called Buttermilk on Cape Cod pondering his alarm clock called Big Ben way back in the Sixties — This photo by Mark Weber, July 10, 2o16 backstage at the Madrid Ball Park where Pete was sideman with the Family Lotus (kick-butt local band) opening for Hot Tuna. 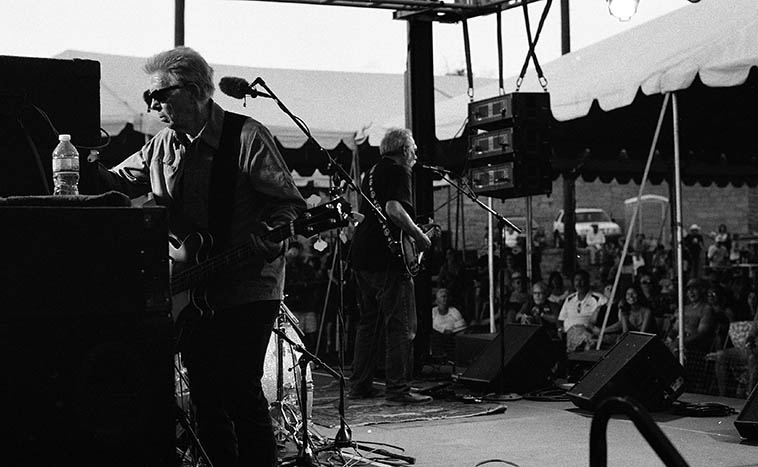 Jack Casady making some adjustments — HOT TUNA at Madrid Ball Park, New Mexico, July 10, 2o16 — Jorma out front —- These guys were smoking, no histrionics, no rock god posturings, no jumping up & down (well, Jack did do a little of that, but it was all in fun) just pure hardcore psychedelic blues, and with the bass mixed nice and loud (something their record producers need to consider) — I hope somebody recorded this one as it was one for the ages, nestled in a vale surrounded by hills dotted with junipers and pinon and a sunset on a lavish hot day (producers rented a canopy for all of us, thank gawd) — photo by Mark Weber 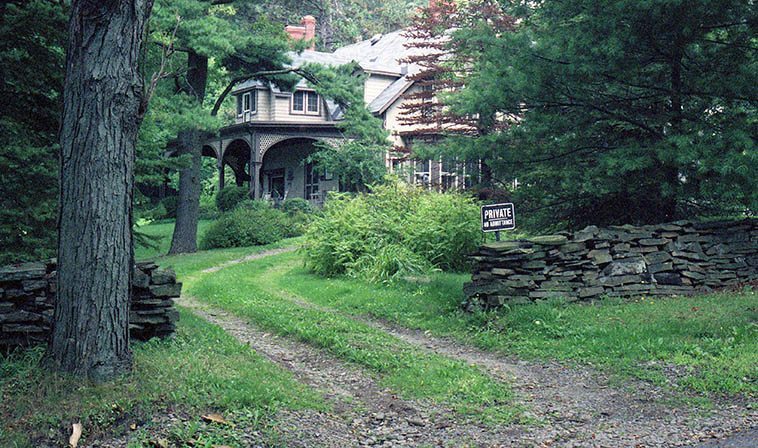 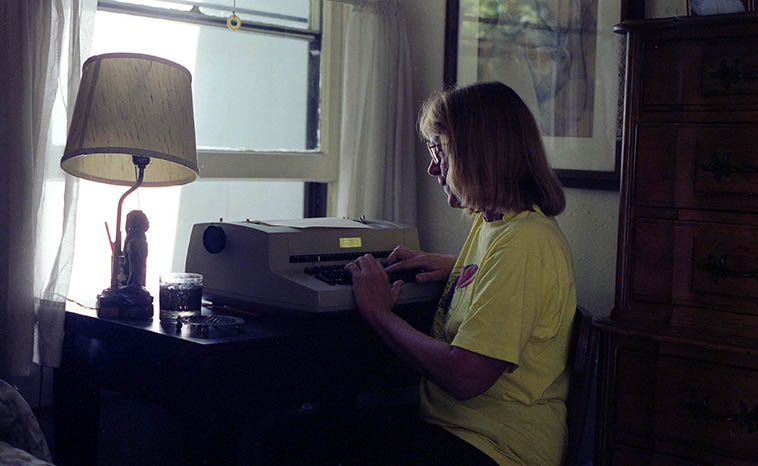 Alas, our dear Ann Menebroker got away from us July 9 —- One of those poets who represent the consciousness of the world, Charles Bukowski dedicated his book SOUTH OF NO NORTH (1973) to Ann —- I published a chapbook of hers on my Zerx imprint: MAILBOX BOOGIE (1991) —- I certainly didn’t get the idea to photo authors with their typewriters from Jill Krementz (Kurt Vonnegut’s wife) but she has done marvelous work along those lines — It just naturally occurs to me to photo writers in their writing rooms — Photo of Ann Menebroker, July 8, 1991 Sacramento, California, by Mark Weber —- in a way she is America’s Anna Akhmatova —-

Here’s one of her poems:

The turtle man writes me about the dog, Lucy,
getting old and beginning to limp, and how his
friend, Wolfgang, in Germany, caught the train
to Paris for the ping-pong games. “Wouldn’t it
be nice,” turtle man says, “to be a train ride away
from Paris?” Then he spoke of Radar, the cat, who
recently got neutered and how he refuses
to look at any of the family, or allow them
near him. In answer I, the dog girl of summer,
write back and tell him how my barking
annoys the neighbors and how it used to be
when I thought about more than food or barking.
The BART goes underneath the bay
from Oakland to San Francisco. I lick water
from my bowl. 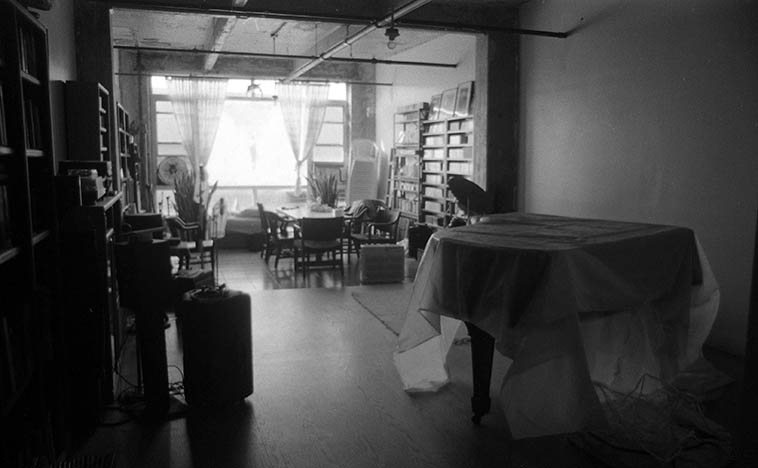 8:30am Connie Crothers’ studio in Williamsburg, Brooklyn –photo by Mark Weber — September 11, 2o13 —- I remember when her first record came out and I didn’t know much of anything about her, being that I grew up in Los Angeles area, I put that record on the turntable one Saturday early afternoon and it blew my mind — Sorrows this day that she passed on toward Yellow Springs early this morning 4 a.m. (RIP August 13, 2o16 in NYC) ————————–poem I wrote yesterday . . . . . . .

Looking at photos of Bellevue Hospital’s monolithic exterior
and thinking of Connie in there somewhere —
with that highway winding up alongside the East River
at 26th Street only blocks away from Lennie’s 317 E 32nd Street studio —
New York will not be the same without Connie —
I’ve been reading ancient forlorn Chinese poetry, at least, it seems
forlorn to me this morning —
the summer stillness, the cooing of mourning doves, little
finches, a soft breeze, Earl Grey, the first time I ever saw tea
leaves brewed openly in a pot was when Connie set her teapot
in front of me on the table in her studio some years ago, up till then
I had always used a tea ball or a basket strainer, it had
never occurred to me how much more effective
and sensible it was to let the leaves float free