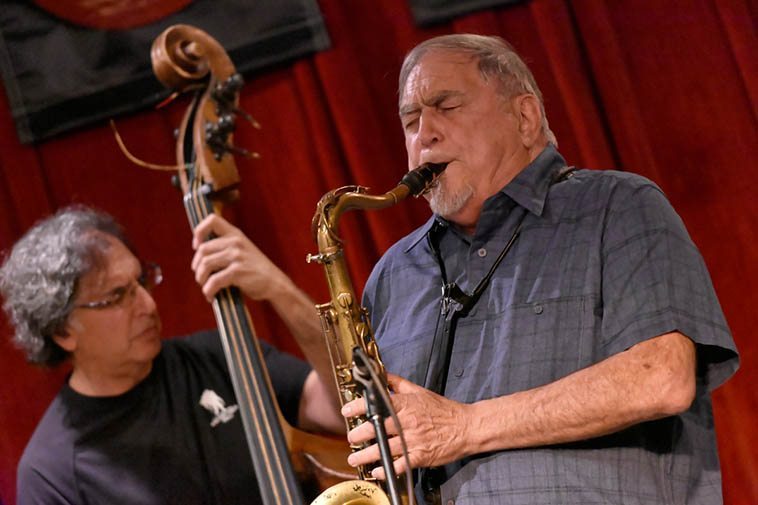 So much has happened since these concerts a few months ago, a friend has departed, memories have mingled with sorrow, windows have been stared out, and just about the time the leaves finish falling off the trees we’ll be voting for a new President in America and hoping everything doesn’t go haywire, or at least, less haywire, crossing our fingers just in case — Photo by Jim Gale during the INTERLACE concerts at Outpost Performance Space, Albuquerque, produced by Tom Guralnick, Mark Weber, and Janet Simon — This is Charley Krachy, tenor, and Don Messina, bass, with the Kazzrie Jaxen Quartet on the evening of May 5, 2o16

INTERLACE concerts — We flew these seven musicians in from New York City and upstate (NY) and Bill the clarinet player drove over from Vegas with his wife Danise — I wanted New Mexico to hear what I’ve been up to when I travel on my annual visits to NYC to work with these artists — These photos are by my friend Jim Gale, an Albuquerque scientist. 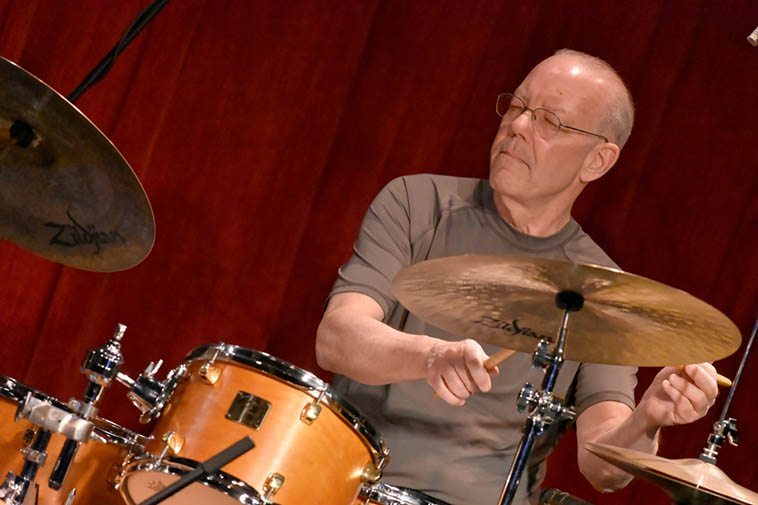 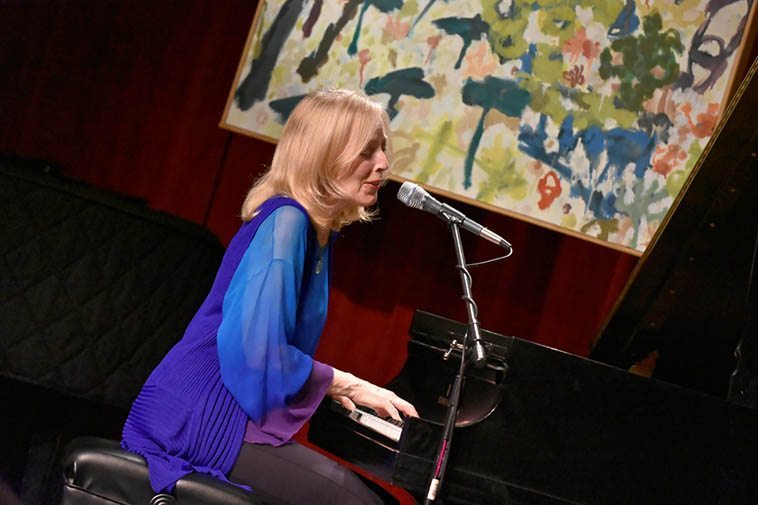 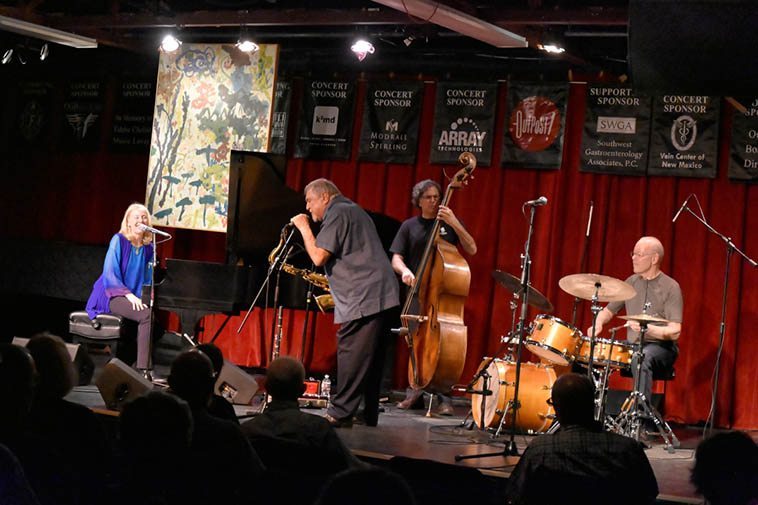 Kazzrie Jaxen & Charley Krachy scatting on “I Found a New Baby” — photo by Jim Gale — May 5, 2o16 — Charley and Kazzrie made their first record together in 1989 — These friends have all worked together for many years, all of them in some way radiating outwards from Lennie Tristano and his ideas of a pure improvisational art. 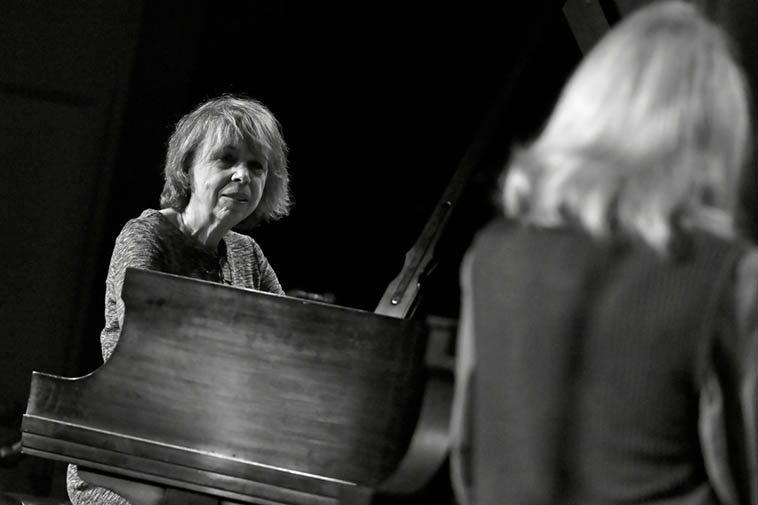 The Seventies were a strange time in America — I can’t get over this notion of how discombobulated everything was, maybe the Sixties had knocked us for a loop? Those of us in the jazz world went about our business ever underground, some great records were made —- Connie’s friends banded together and started their record company New Artists in 1982 —– What were they doing all through the Seventies? (This is the era of the salon sessions at Lennie’s place in Queens) — Photo of Virg Dzurinko & Kazzrie Jaxen — May 6, 2o16 taken by Jim Gale 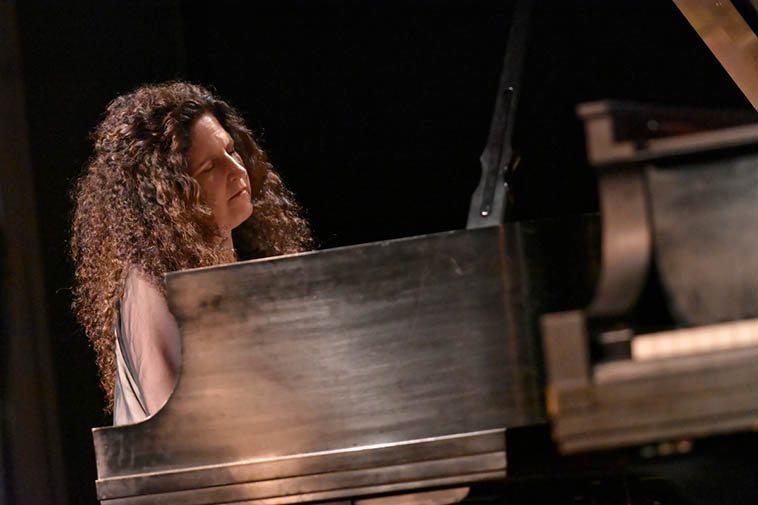 Through it all, the Seventies, Eighties, Nineties, they remained friends and to this day their collective has remained a true community of artists working together, searching and dreaming, making sense of it all — Carol Liebowitz during her solo set May 6 photo by Jim Gale 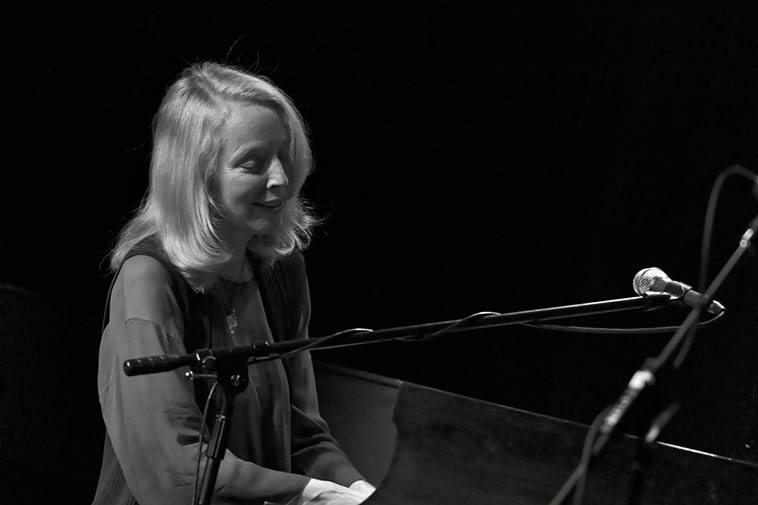 Kazzrie Jaxen — May 5 on the Steinway B — photo by Jim Gale —- A person who truly inhabits magic and lives in the magical, would not know what you are talking about if you asked about this magic 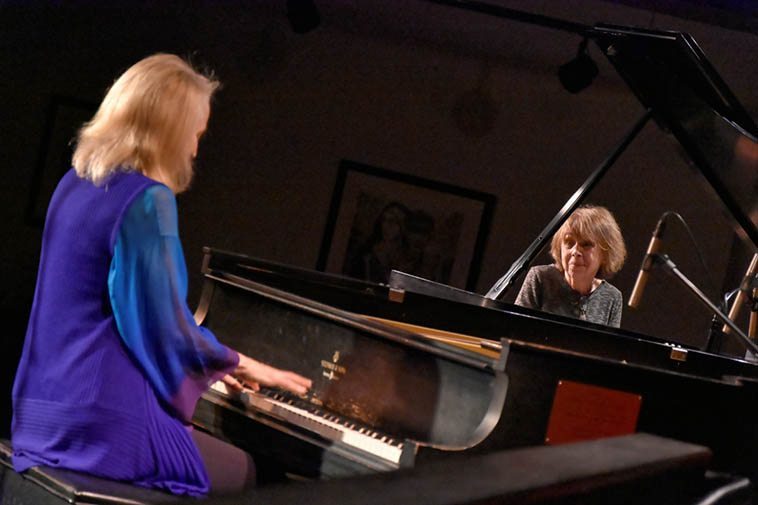 Virg Dzurinko & Kazzrie Jaxen — I first heard recordings of this duet at Virg’s studio on Convent Avenue and it really knocked me out so I asked if they might consider doing some of this in Albuquerque? They used a rehearsal room that had two pianos at Greenwich House in the Village to acquaint themselves with what might happen at Interlace — Photo by Jim Gale — May 6, 2o16 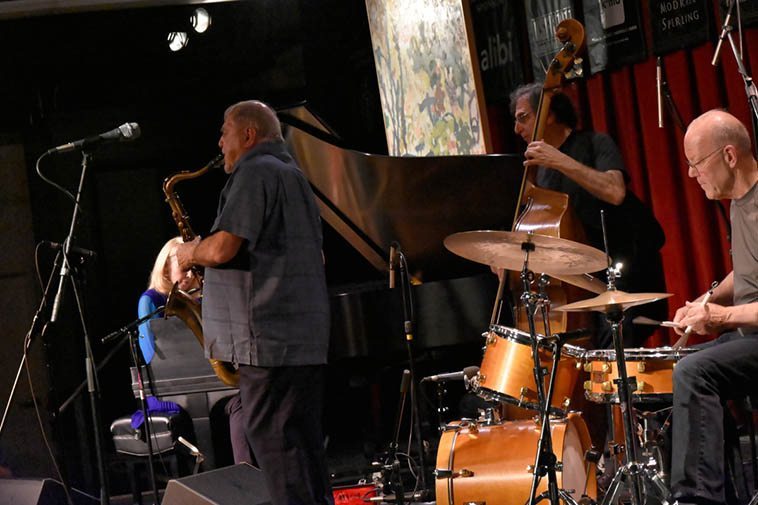 Kazzrie Jaxen Quartet —- We hung that painting by JB on the first night to accompany the poem “Spiderweb Mandala Flower Explosion Poem: Drishti” that I read with Carol & Bill — the painting was the inspiration for the poem (that we had performed coincidently the previous May in Brooklyn with Eva Lindal and Ken Filiano in quintet) — photo by Jim Gale — May 5 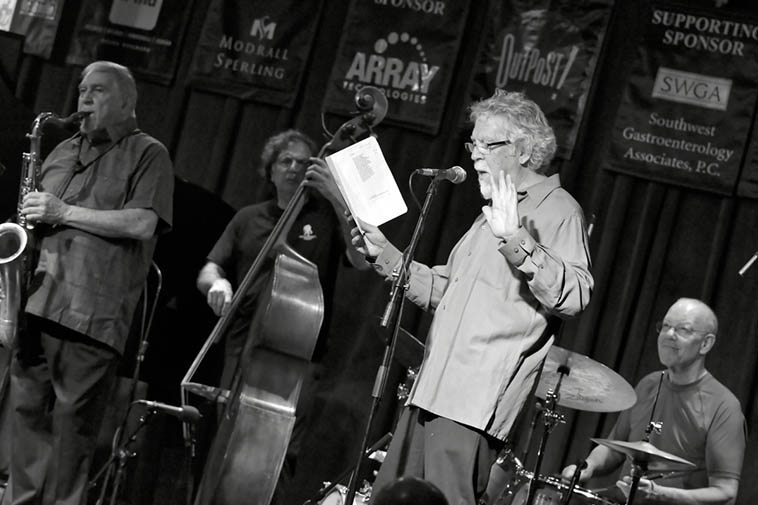 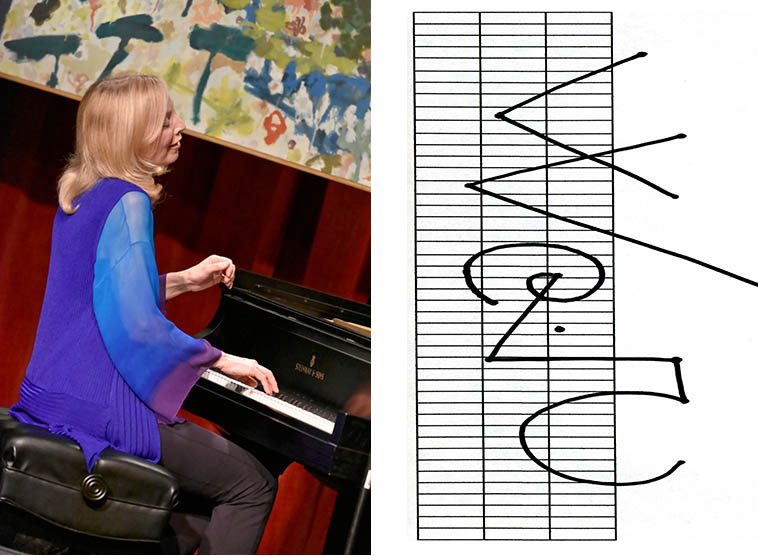 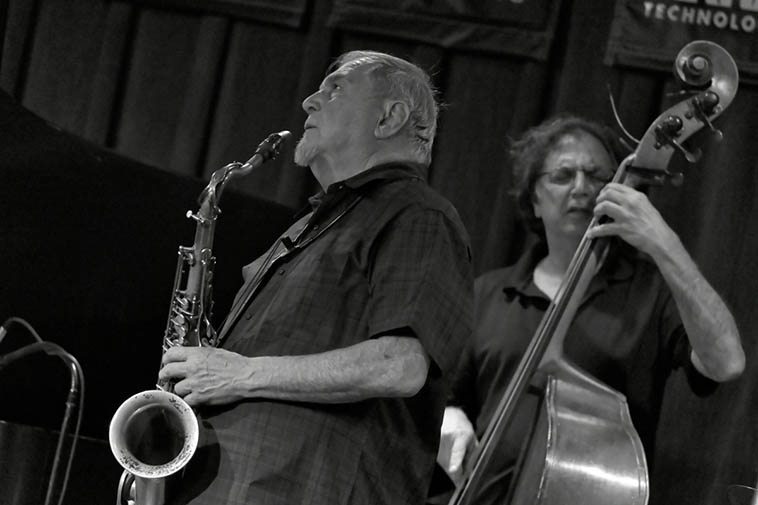 Charley Krachy and Don Messina — May 5 — When I think of the aggregate of musicians in the Tristano lineage I am reminded of the Dunbar Number, a theory in anthropology that understands social groups to function up to 150 individuals, the limit to which human tribes/clans can work as a group effectively —- After that they split off — For instance, with the Genome research now on the table has made it possible to mathematically figure out that the first homo sapiens who left Africa 50,000 years ago (to the minute) was a group of 150 (!) — similarly, the collective that radiates closely out of Lennie, Connie, and Sal, stretch all over the world and someday I’m going to make a list, and I bet you it’s close to 150 — Photo by Jim Gale 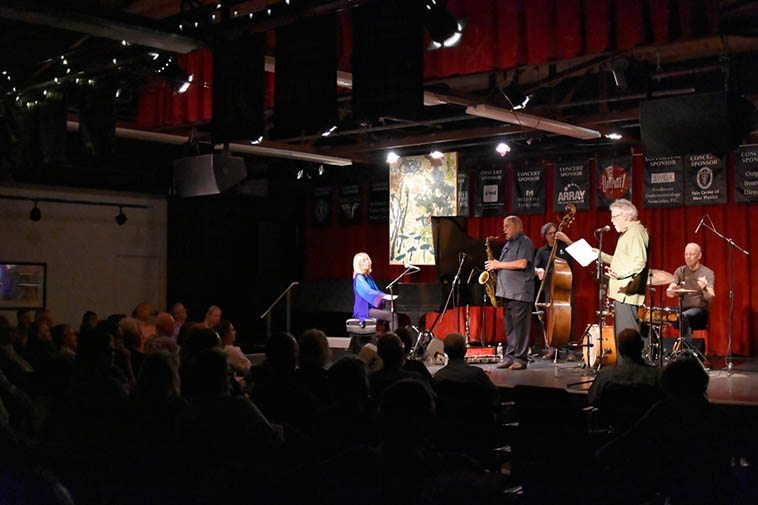 Kazzrie Jaxen Quartet plus Mark Weber — May 5, 2o16 — photo by Jim Gale — You never see sheet music on stage with any of the musicians associated with New Artists Records 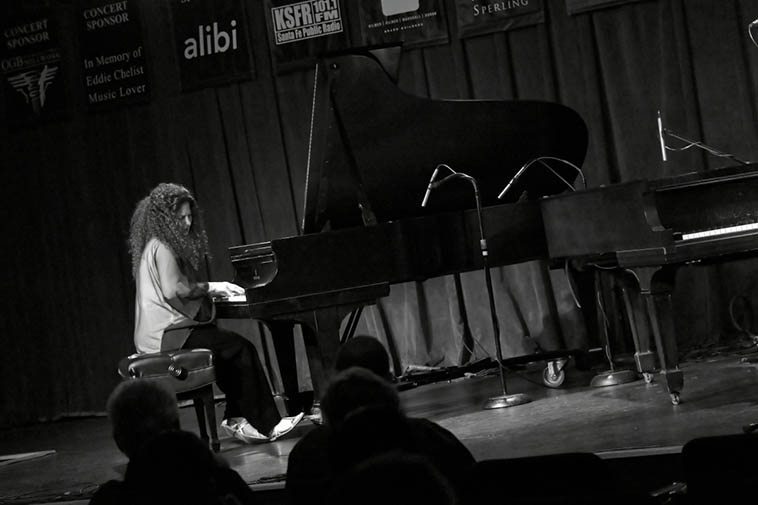 Carol Liebowitz on her solo set May 6 —- I think Carol, for the most part, prefers to play free — I totally love her treatment of tunes and had openly hoped she’d play a couple tunes (as producer, I don’t interfere with what the artists are going to do) but she complied and played “Melancholy Baby” and “It’s You or No One” and was fantastic abstractions cosmos interlace deep dive — photo by Jim Gale 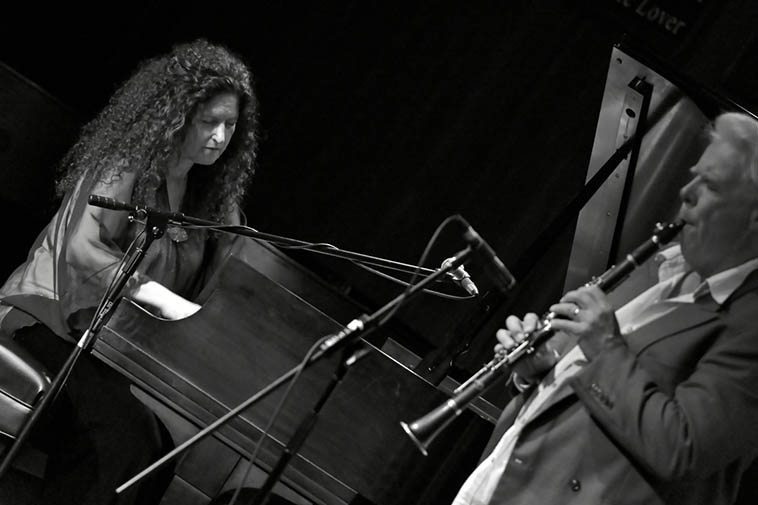 Alas, the red tape to secure a work/performance visa from the US Embassy was too daunting and expensive and a drag so that Eva couldn’t make it to be with the trio, so Bill Payne and Carol Liebowitz soldiered on in the duet format (Eva Lindal lives in Stockholm) — photo by Jim Gale — May 6, 2o16 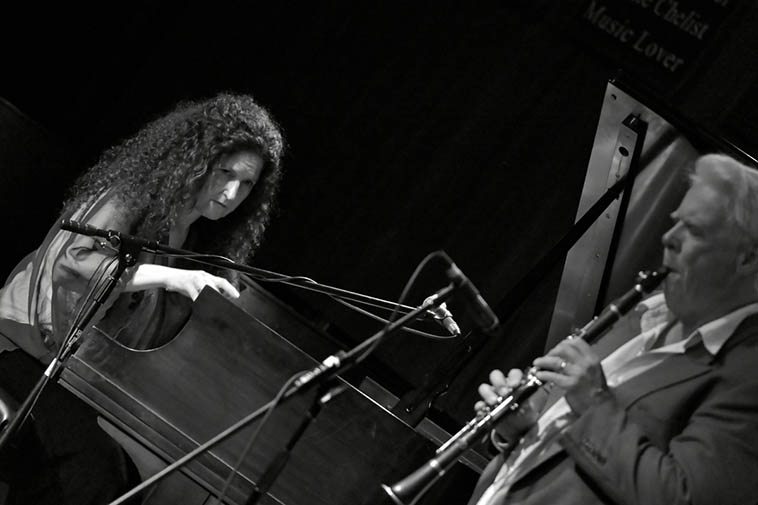 Normally this ensemble is the Payne Lindal Liebowitz Trio but during Interlace it was just the two — photo by Jim Gale — May 6, 2o16 —- Everything they do is a free stretch 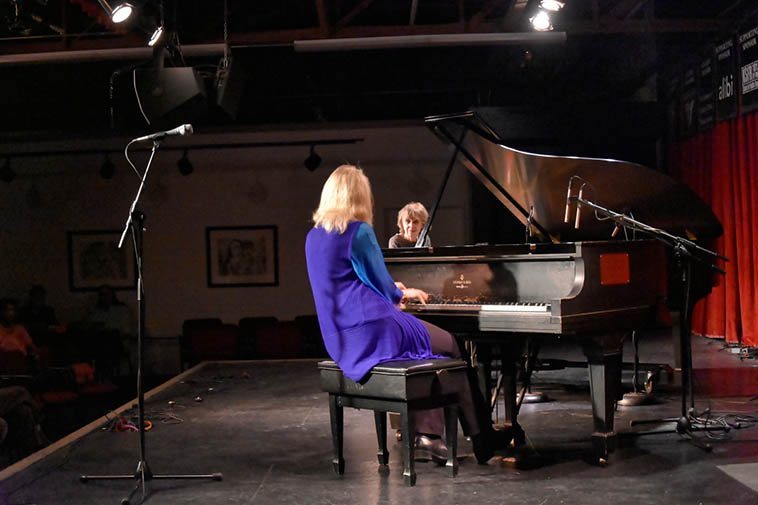 I have sometimes tried to sort out what it is about this consortium of musicians that attracts me — they are all different, but share a common sensibility, there’s something in the notes, a bluesy-ness and solidity of intent — and the Lester Young thing with the long lines of lyric improvisation — They have remained patient, never rushing things, their attention to a truly authentic expression, purely honest desire to play and inhabit meaningful statements ———– It seems like every thing I can say about these musicians you could say about every other jazz musician I’ve known, except there is still some mysterious quality that distinguishes them, maybe it has something to do with female energy, (the moon and its tides)? Kazzrie & Virg — May 6, 2o16 — photo by Jim Gale 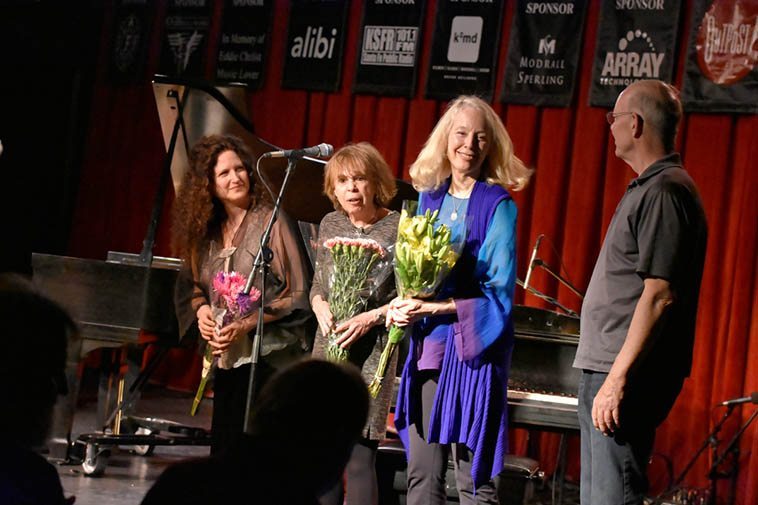 At the end Janet had bought flowers — Carol, Virg, Kazzrie, and Bill C — May 6, 2o16 — I never told anyone but these two nights of concerts were my private memorial for my parents — Don & Joy Weber — who had passed away in the not so recent past —- Photo by Jim Gale 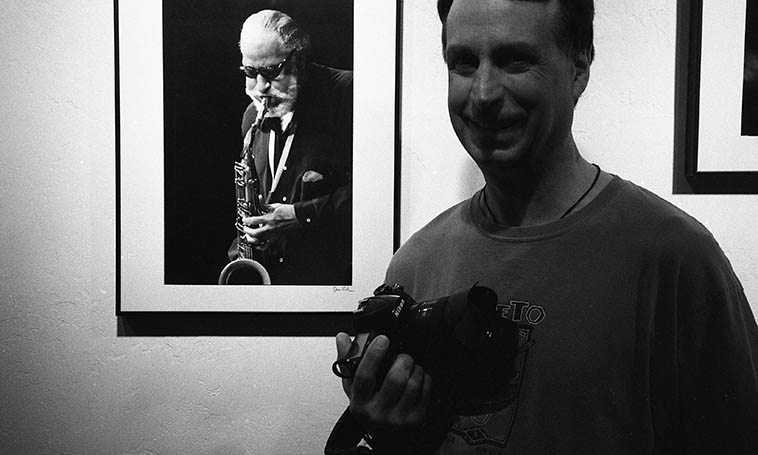