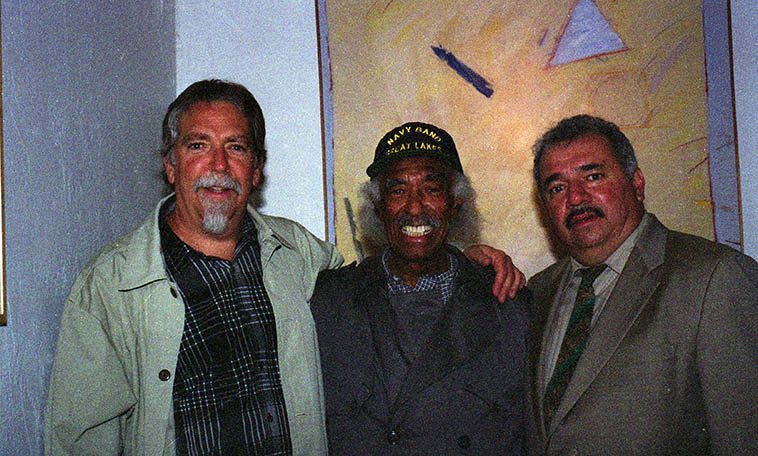 Mark Weber, Gerald Wilson, Steven Loza — backstage at the Outpost Performance Space, Albuquerque — December 4, 2003 —- I grew up listening to Gerald Wilson’s orchestras on the radio in Los Angeles so it was deja vu having him on my radio show that afternoon and this night on stage at the Outpost with a University of New Mexico large jazz band (Steven Loza is a trumpeter and long-time friend of Gerald’s and the author of TITO PUENTE AND THE MAKING OF LATIN MUSIC, 1999) — Gerald brought his wife Josefina to the radio show and I was beside myself as my all-time favorite tone poem of Gerald’s is “Josefina” and anyone who lived in Southern California during the 1970s heard that tune everywhere, it is so beautiful, and she was so shy I couldn’t get her to say a word during the radio hang

Bing bang bam boom
I was surprised aspirin worked
That toothache seemed more in the category
……………………….of opiatesville
Maybe when you get older, aspirin
………………………………….is all you need?

The guy with the horns said
You are now assigned to 63
………….don’t fuck it up
I said What business is it of yours?
He just laughed
I guess, in this poem, he represents
…..bad turns of events that could have been avoided
………………..if I was paying closer attention, he’s a trope, a mirage

The dentist was half-heartedly trying to convince
me to see a periodontist, even though my teeth were
in fairly good shape, the gums were separating
and there was bone loss, but
if the teeth are secure
maybe running off to a periodontist is premature?
Nobody mentioned the elephant in the room: The dentist
was some years younger than me, and maybe from her
perspective I could just ride it out?

Even though you’d rather sit back
and let the specialists figure out
the best course of action, it doesn’t work that way:
You have to crank up the brain and navigate
…………….the choices, sort out the vested interests
…………………the imprudent moves, just like chess . . . .

For the heck of it
I actually picked up the ringing telephone
(I’m back home now, in this poem)
The guy wanted to sell me some insurance
I told him about the elephant
He said it wouldn’t cost that much more

We never did figure out why the toothache, exactly
Maybe I grind my teeth at night?
…………and that aggravated the ligaments and nerves?
It doesn’t strike me as beyond the realm of possibilities
there being a plethora of things in this world
to grind one’s teeth about 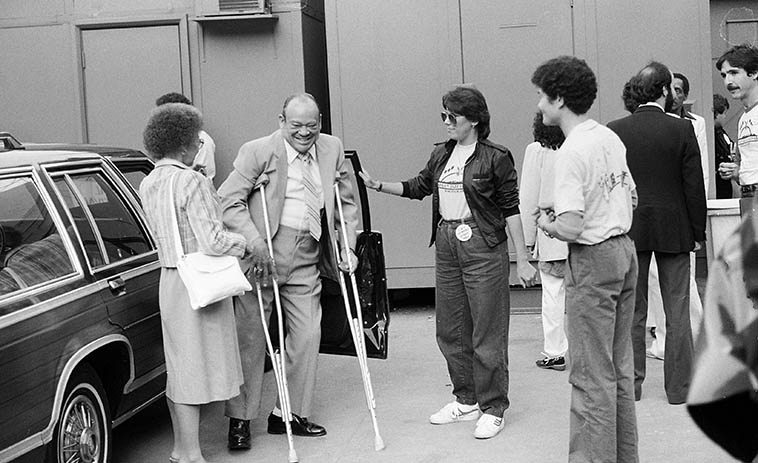 Arnett Cobb at Hollywood Bowl Playboy Jazz Festival — June 19, 1982 — photo by Mark Weber — Somewhere I have a shot where Arnett told me “Wait a minute,” then raised his crutches straight up in the air, and said, “Okay, shoot!” 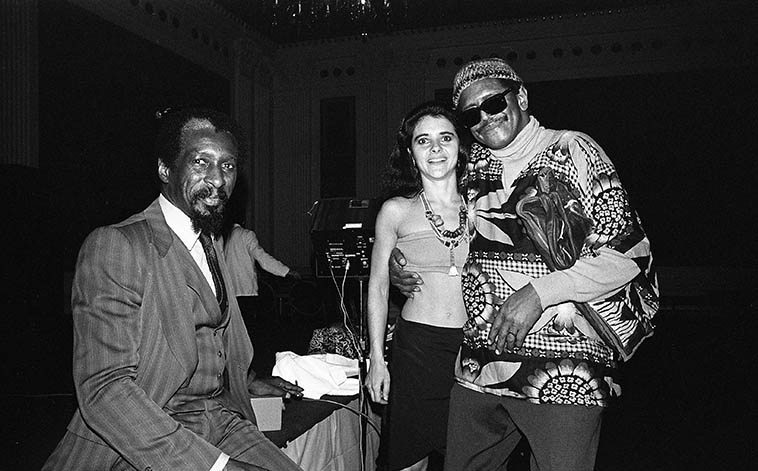 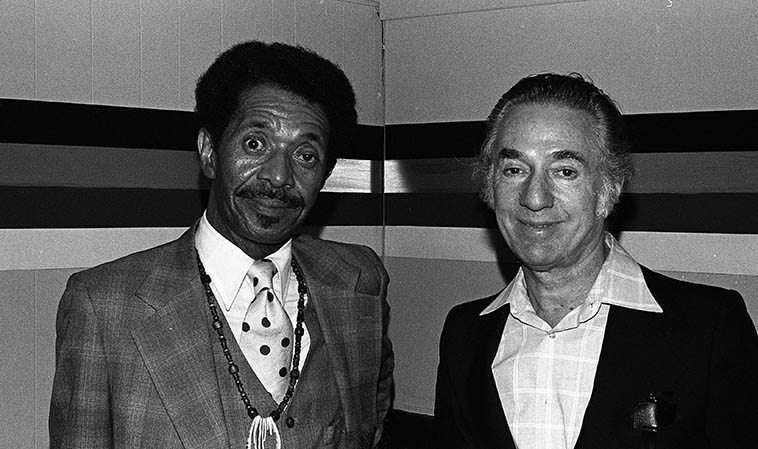 Philly Joe Jones and Leonard Feather at Donte’s — April 9, 1980 — photo by Mark Weber — It was the devil in me that orchestrated this photo — Philly Joe’s quartet was on break, and I had asked him if I could take his picture, and just at that moment Leonard Feather was walking by and I said Hey Leonard stand with Philly Joe! — (Leonard was not very well liked in those days — despite all of the great work he did in jazz journalism he had a weird quirk of slanting things pejoratively in his L.A. TIMES jazz column) — So, that explains Philly Joe’s look, he was telling me with his eyes that he’s going to kill me after this shot (I still think Feather’s less than 500-word analysis of Supersax on their first album is the most succinct explanation of that marvelous band’s work) 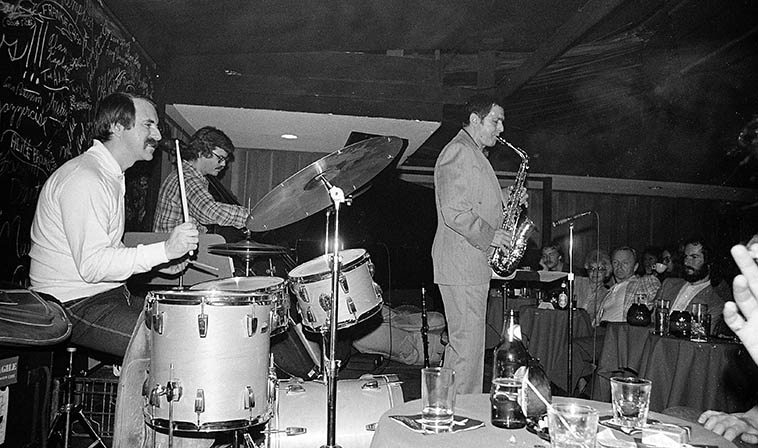 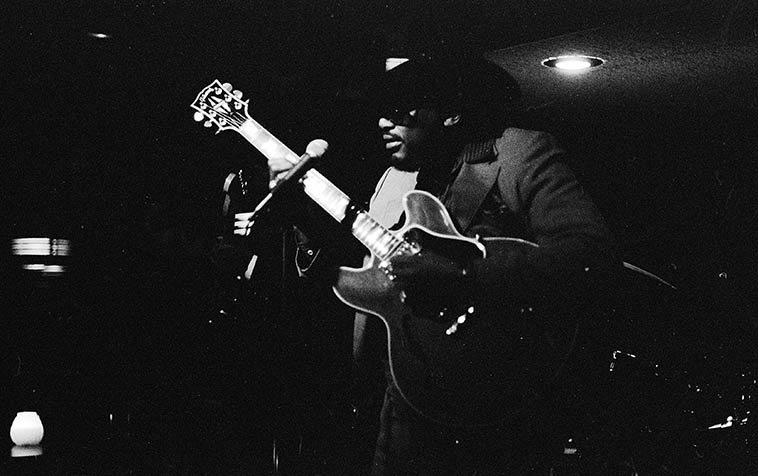 Otis Rush in a little dive on the Near North Side of Chicago — December 10, 1988 — photo by Mark Weber — and it was COLD in Chicago that week — Otis Rush is one of the baadest of the baad for post-war Chicago blues guitar — and this little club only had about a dozen other people there that night, so, we had him all to ourselves —– There’s a convention in rhythm & blues showbiz where the backing band comes out first and plays 3 or 4 numbers to “warm up the audience” —– well, this band was so killin’ I didn’t care of Otis ever came out, gawd, Chicago was so full of great bluesmen those years (Dave Cook, organ; Sam Burton, drums; James Wheeler, guitar, Emmett Sutton, bass) —– While Otis was playing I somewhat loudly was explaining to Janet (I’d had a few maybe too many beers) how Otis can arpeggiate a chord and then inexplicably bend all the strings in opposite directions which makes for a very wobbly out-of-kilter sound —- Well, he heard me, and walked over to our table and stuck his guitar neck right in front of Janet and while the band was burning full on, he demonstrated this technique, articulating that chord over & over, in time with the blues they were scorching the place with — club Close Encounters, 936 N. Rush Street 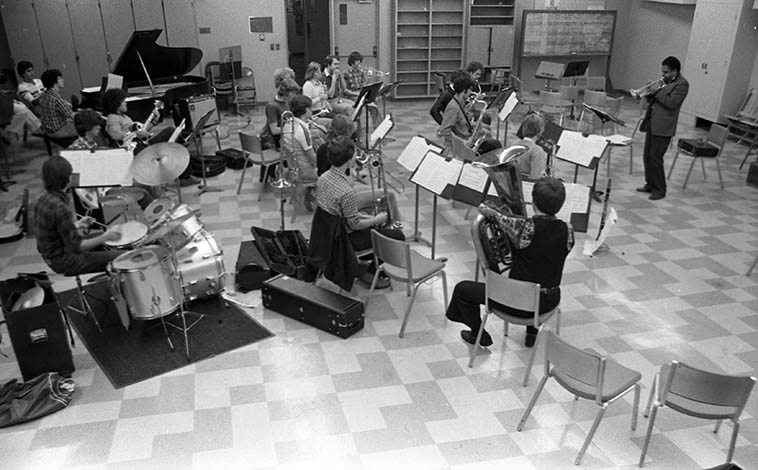 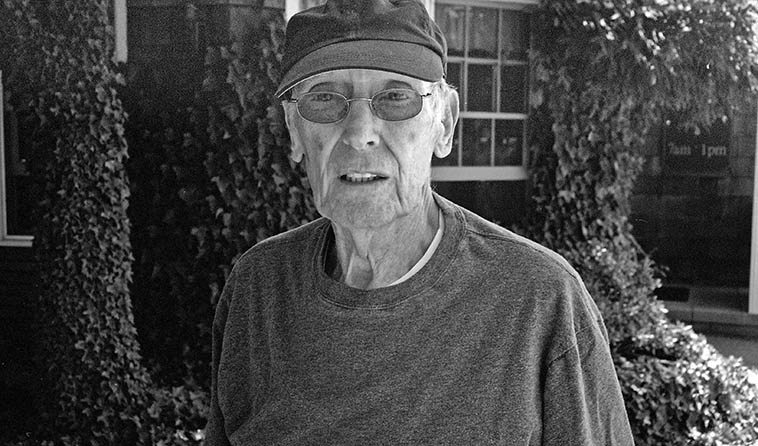 The saxophonist Hal McKusick — big breakfast after-shot at The Hampton Maid, Hampton Bays, Long Island — July 10, 2009 — photo by Mark Weber —- I’ve never known anyone with the level of cool that Hal had. He was completely unpretentious and totally laid-back. Nothing was rushed. And he talked in that smooth tongue of the 40s & 50s hipster, an elliptical argot that we know from Lester Young. One time when I showed at his door he invited me in, asked if I was hungry, “You want me to burn you something?” 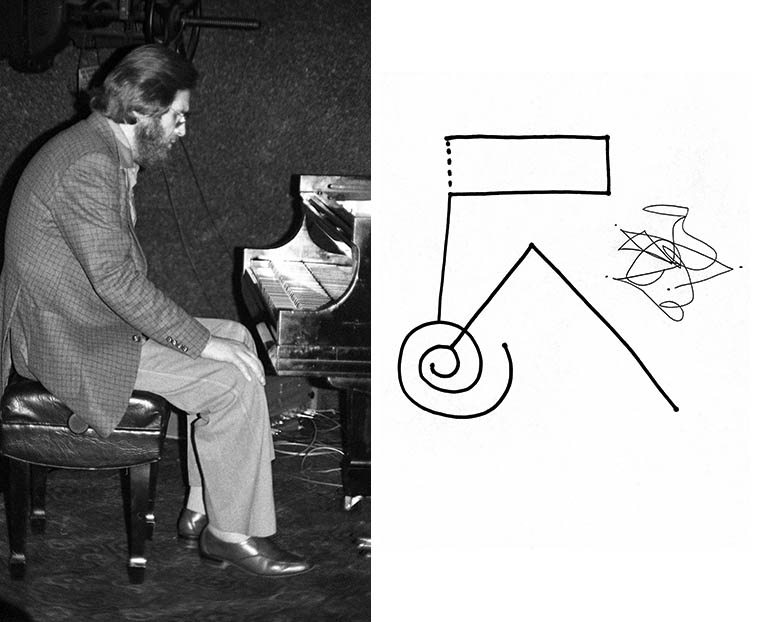 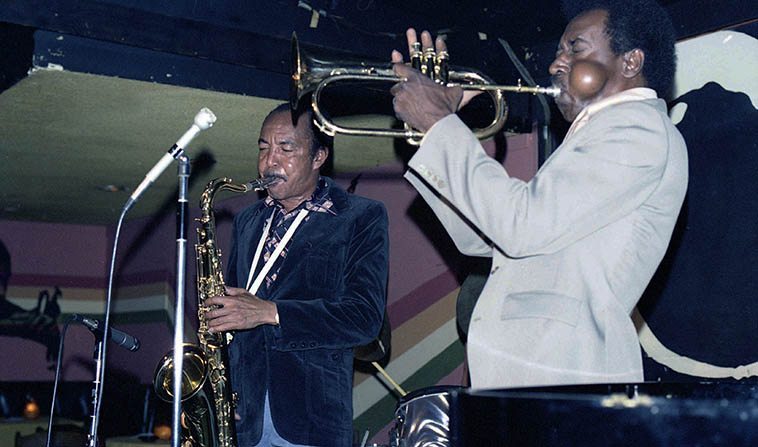 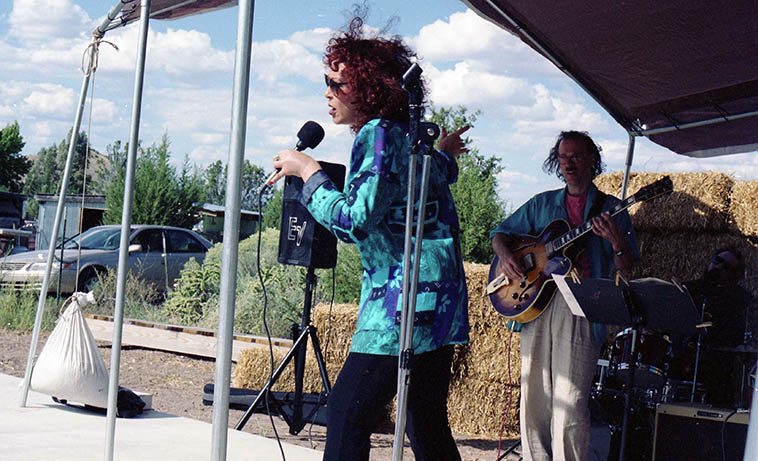 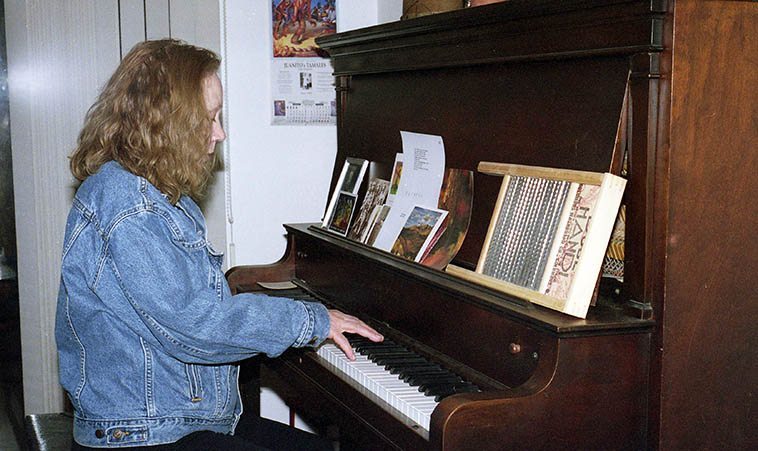