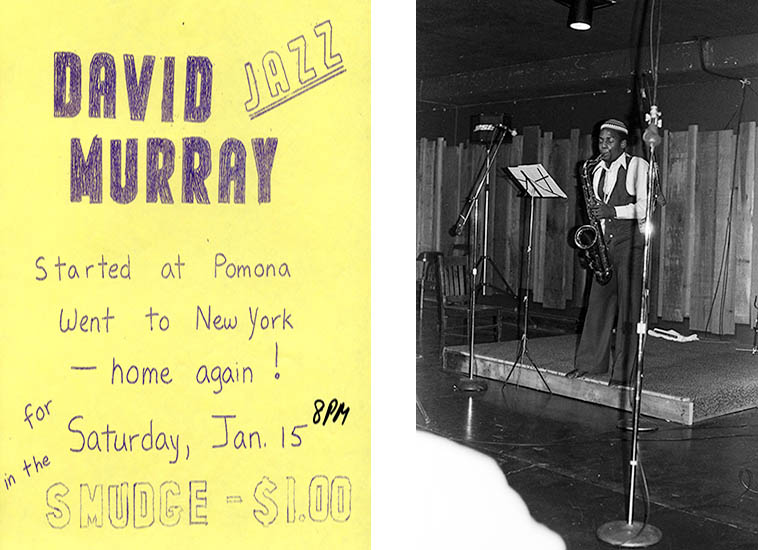 I was looking through a bookseller’s catalog the other day and had a knee-jerk reaction to a book that seemed to infer that telepathy didn’t exist —- what would you think of a book subtitled approximately: the Pseudoscience of Telepathy and Other Powers of the Mind? My first reaction was that I realized Americans do not attend jazz concerts. Maybe proving that such things as clairvoyance, telekenesis, ESP, and telepathy, are so far nearly impossible to reliably evidence, my own belief is that homo sapiens had thought transference in abundance before Word Virus invaded our brains. Remember that interesting book a few years back THE SENSE OF BEING STARED AT (2003) which I immediately read, having conducted my own casual experiments along these lines for years —- Sitting shotgun on Los Angeles freeways during slow traffic I would stare at drivers in the car next to me and I swear to God they almost always turned their head and looked directly at you, as if an unconscious response on their part. So, after reading that book I started looking at people  in crowds, usually the backs of their heads, or sideways, and only about 40% of the time would they turn and eye to eye stare deep into your mind, it was eerie. 40% is a lot. I wonder’d if younger brains were better at detecting another brain looking at them? I’m still “researching” that one. Jazz musicians demonstrate the ancient human capacity for thought transference every single night on stage all over the world. I like to call it telepathy. As to the verifiable existence of knee-jerk reactions I think it has been proven that one should abstain from such things, and quit calling them “intuition.” The author in question was Brian Clegg, a physicist with a perfectly irreproachable reputation in science writing on subjects such as quantum entanglement, time machines, Big Bang, infinity (a brief history of . . . .), Are numbers real? the random universe, God, gravity, the prehistory of the universe —- All those things you used to think about when you were a kid laying in the grass staring at the stars at night. 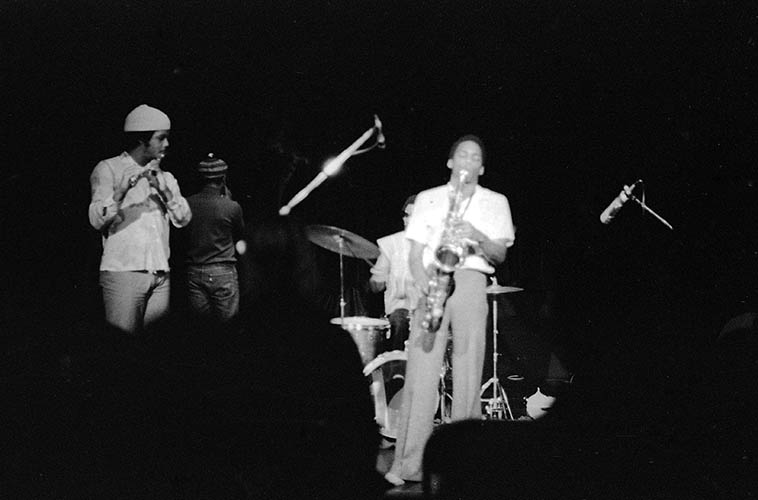 David Murray Trio at Century City Playhouse, Los Angeles — January 6, 1977 —- David in town from NYC — trio was local cat Roberto Miranda (bass) and maybe he brought Oliver Johnson with? on drums — Sitting in: John Carter (clarinet, with his back to camera) and James Newton (flute) —- photo by Mark Weber 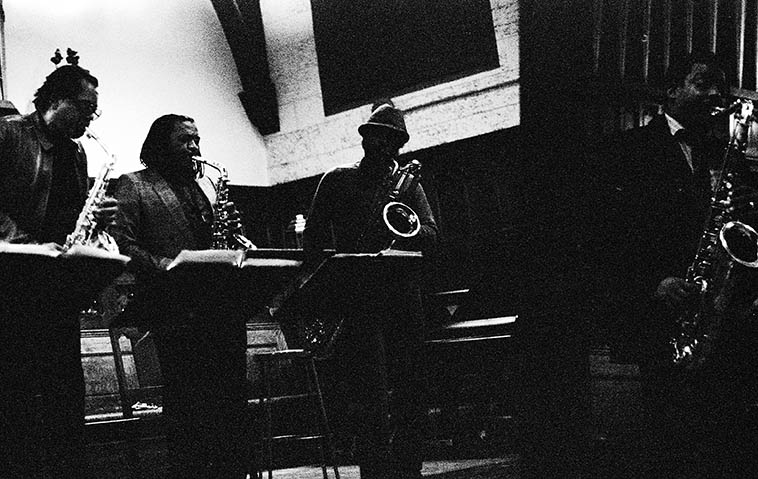 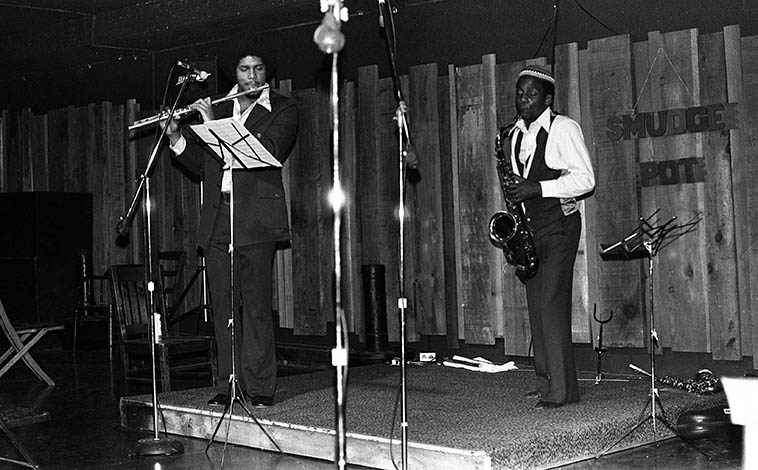 Not sure why James Newton isn’t mentioned on the handbill for this January 15, 1977 concert — That’s James and David Murray, who both had associations with Claremont Colleges — NOTE that the album SOLOMON’S SONS (Circle Records) has the incorrect date of January 16 — I’m fairly certain they didn’t play 2 nights, although that’s not outside the realm of possibilities, these guys were hungry to play these years, but January 16 would have been a Sunday night and this is a sleepy college town —- You can see Bruce Bidlack’s recording mikes in this shot —- photo by Mark Weber 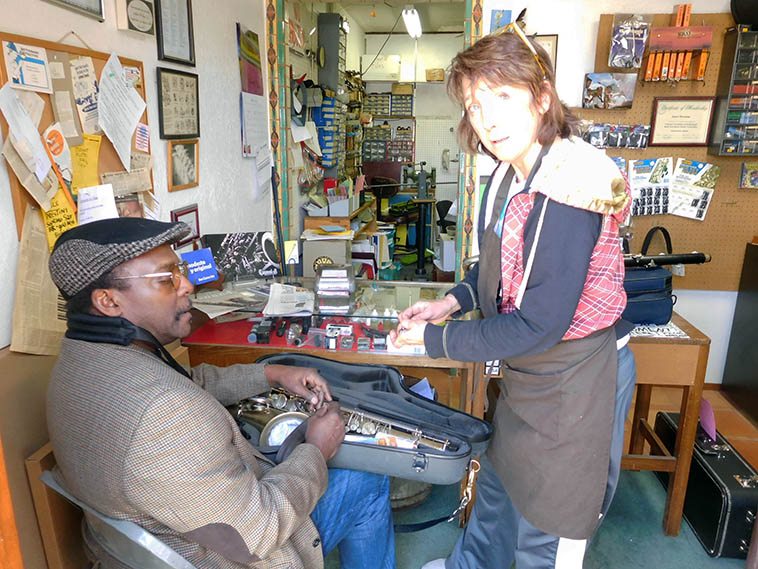 David Murray getting his horns adjusted at Second Wind Repair by Janet Harman, who is a bass player around town and a member of the popular ever-working Albuquerque Cuban-style jazz band Son Como Son — How a bass player became a master woodwinds repair tech has long been a ponderance of mine —- photo by Mark Weber — April 10, 2o17 Albuquerque — You can see David’s bass clarinet behind Janet, and that’s his Mark VI in his lap 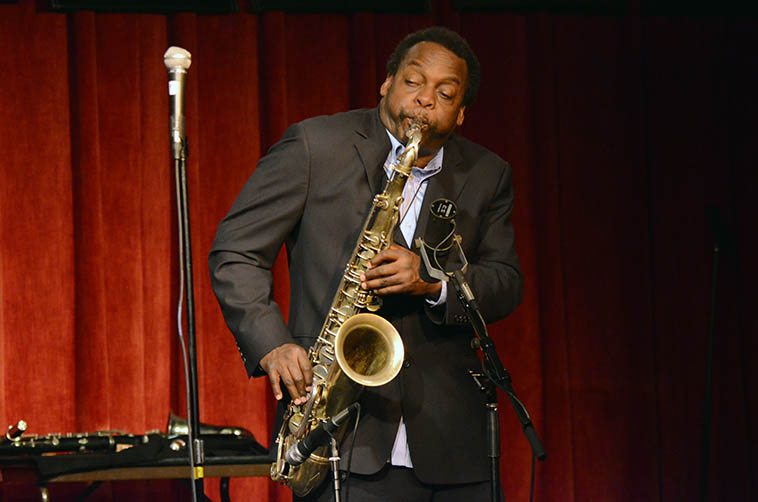 David Murray at Outpost Performance Space — April 9, 2o17 —- photo by Steve Schmidt —- It was at this concert that David told me he saw the blast from the past Larry Seidler at his gig the night before in Vallejo, California —– So, he gave me Larry’s number and I called a few days later and Larry said, “David sounds incredible, better than ever! I have their duet cd that was recorded a couple years ago and they’re way beyond that now, just incredible.” 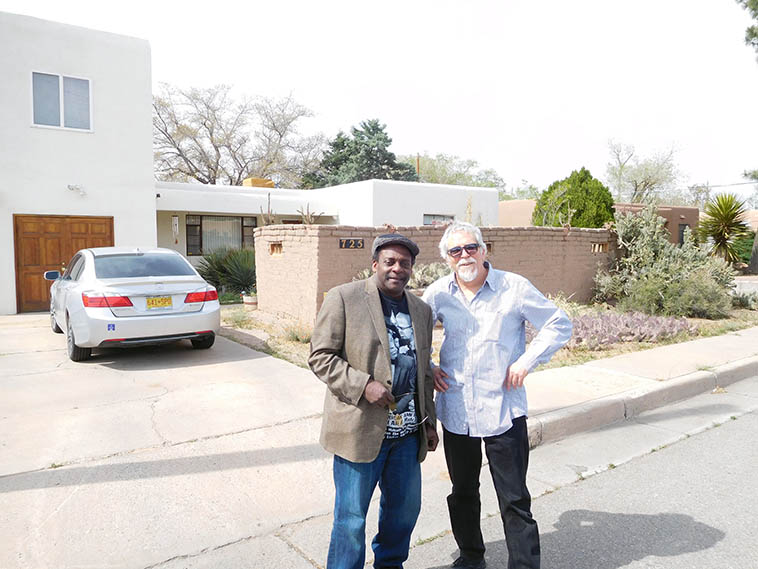 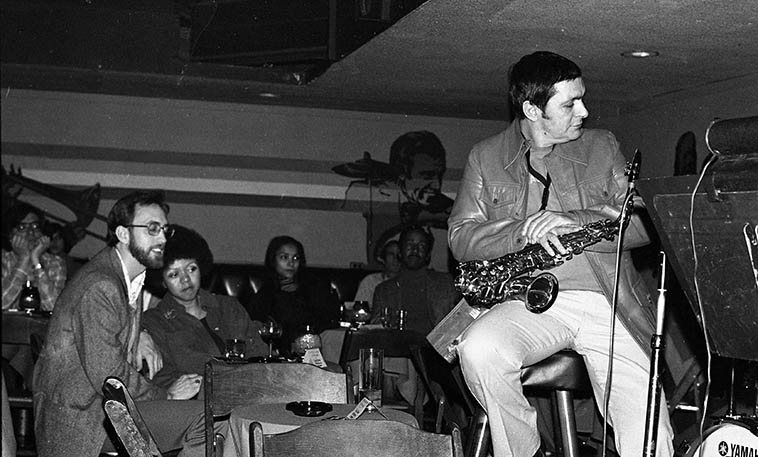 Art Pepper at Donte’s — January 1979 — photo by Mark Weber —- At the same time I was experiencing the emergence of David Murray in Claremont and all that free jazz with Larry, I was hitting the North Hollywood jazz clubs and caught Pepper ten dozen times, he was so electric —- I saw similarities between he and David Murray’s approach, maybe because they both always went for it total burn down the barn —- Pepper those years never laid back, everything was do or die 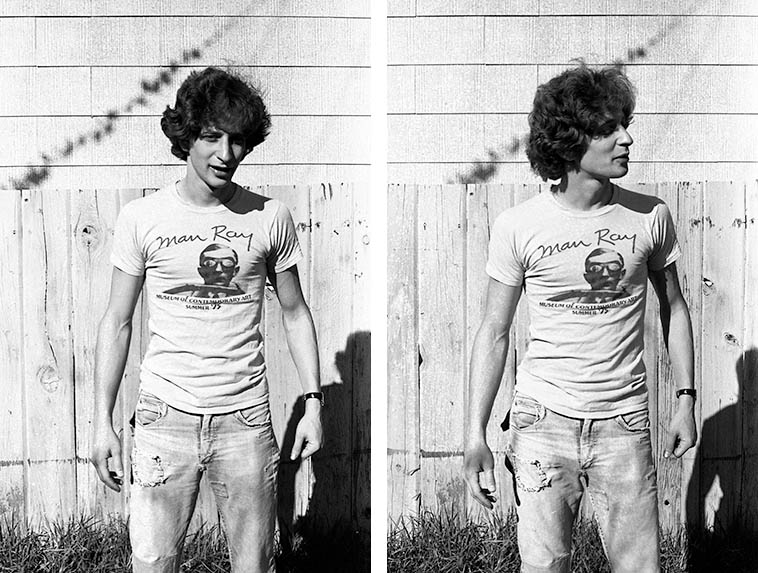 Larry Seidler who I haven’t seen in ages —- This shot is at my little alley house in Upland, California — 1977 —- I first met Larry five years before in 1973 where a bunch of us bohos lived at the base of Mt Baldy in a clutch of cabins called Sunshine Apartments (24th & Euclid, Upland CA) —- I heard this weird music coming out of his cabin —- I stood there in amazement and he saw me confused in shock and invited me in and that’s where I saw my first ESP records — He was playing Albert Ayler or maybe it was Paul Bley he loved all that stuff —- Larry was a student at Claremont Colleges —– Although, I might have heard Albert Ayler by then, because when he saw that I already had Bobby Bradford & John Carter albums in my own collection (back then one generally heard Albert Ayler before hearing Bradford) and I do remember specifically that I was flabbergasted when Larry told me that Bobby Bradford was playing a gig at Claremont Colleges in the next couple weeks (I hadn’t a clue that Bradford was actively playing or lived that close — This was before Bobby’s long 1973 sojourn to London) —- Larry was a good guy —- I don’t think I was familiar with the characteristic known as mensch, but Larry had that in abundance ——————

You’d think I remember’d better, what I do remember was arriving in San Francisco after an 8-hour drive how audacious Larry was as he somehow got us entry without paying (money was short to be sure, alas) simply by talking a blue streak, and there we were: Inside Keystone Korners for the first time (first of many in the years to come) and what I don’t exactly remember was whether Cecil was playing when we walked in? I think not, elsewise Larry would not have been able to effect his onslaught of which I was unaware of this tactic, it being spontaneous in the extreme, and me, Sharon, and David Murray just rolled with it, still feeling the road in our bones (we drove up in Larry’s 1973 BMW, what a great ride), we were fairly impecunious, Larry and David being college students and me a factory worker with my young wife —-

The Cecil Taylor Trio probably hit shortly after we stepped inside and the electricity of seeing Mr Taylor for the first time (October 1974) charged the atmosphere (only about twenty in attendance, Cecil was legendary but not that sought after those years) the idea of entry fee became irrelevant as the music enveloped us, Jimmy Lyons incisive alto and Andrew Cyrille muscle —- All I know was: these fast-talking college guys were something I’d never experienced before, let alone Cecil and his Trio, which was everything and more than expected after our long haul from Southern California —- Lyons sax could go right through you and Cyrille’s thing was to set triggers under Cecil and play the walls off the clock — we were absolutely thunderstruck, and then with Larry’s elegance afterwards somehow has offered to take Cecil to dinner and there we are, back in the BMW with Cecil riding shotgun! ————-

That same trip Larry introduced me to Henry Kuntz, the editor of BELLS magazine (we slept on Henry’s floor)(David stayed at his mother’s in Berkeley) ———– Larry came from Iowa so he was used to long drives, I guess, I remember one time back in Claremont he tried to convince me to drive to Portland to catch Sam Rivers, and I demured, that was a bit of a stretch for me, but Larry went! Larry had a radio show at KSPC called Radio Free Claremont where he played free jazz with a smattering of the Chicago blues that he loved so much (1973-1974) —- All of it comes down to: Lines of influence —- NOTE: the Sunshine Apartments could easily be a scene from a Ross Macdonald novel, one of my all-time favorite authors 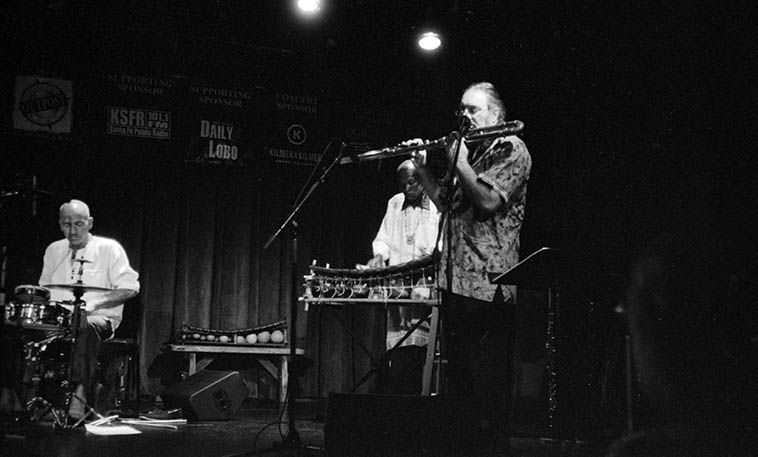 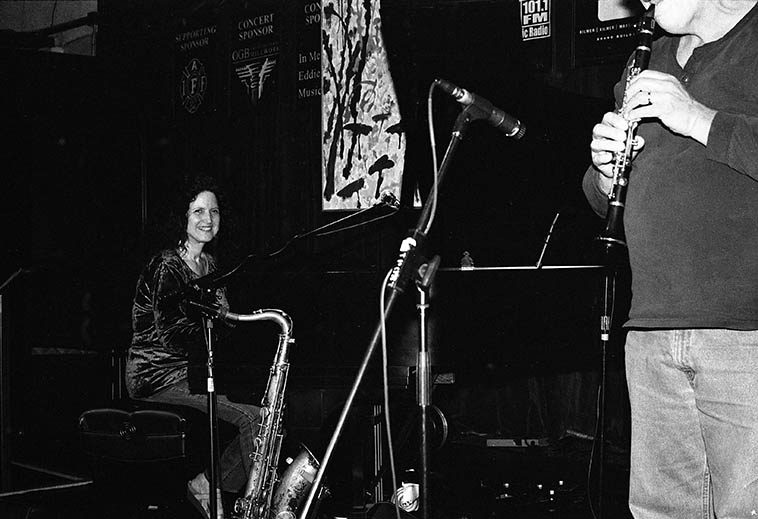 Carol Liebowitz and Bill Payne duet at soundcheck — Outpost Performance Space — May 5, 2o16 — photo by Mark Weber ———— I hope they someday release the music from this concert, we captured a good recording, meanwhile, today on the Thursday jazz show we’ll spin Carol’s new cd in duet with saxophonist Nick Lyons FIRST SET (LineArtRecords) Here’s the blurb I wrote for it’s release last September (2o16): Music that expands and fills up corridors after each opened door, like a memory of something you’ll never forget, like a river that flows across the sky, like driving through a town upstate where an old guy named Johann is sitting on a porch swing at the motel and at the gas station the name patch on the attendant’s shirt who’s checking your oil says Ludwig, it’s like part of you goes up into the air and circles, you can see the outlines of tall buildings on islands, the rotating beams of klieg lights pulsating into the night with all the music that has ever been. 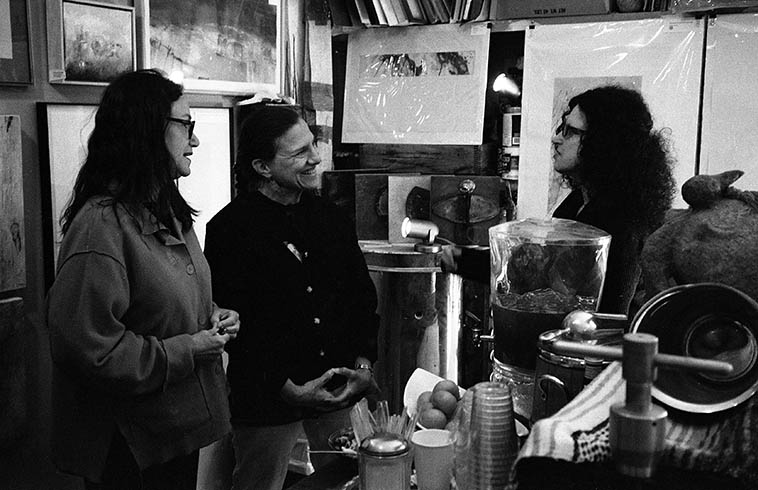 Left to right: Riha Maria Linde Rothberg, Janet Simon, Carol Liebowitz at Riha’s studio in the mountain village of Placitas, New Mexico — May 8, 2o16 —- When Carol was in town for concerts we took her to see Riha’s paintings (and Wayne’s) —– photo by Mark Weber —- Riha once asked me if she could cut my hair (she said it looked dumb when it’s long) so I thought about that a minute (I usually cut my own hair) and concluded that I was curious how an abstract expressionist would cut hair 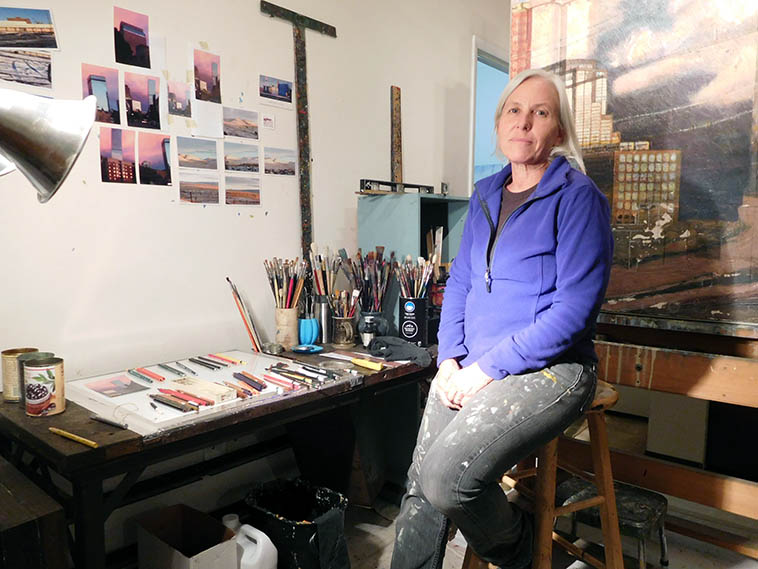 One of the greatest painters in the West: Sharon Feder in her Denver studio — October 29, 2o16 — I’ve been looking at her paintings ever since I met her sister Janet twenty years ago and was highly-energized to finally meet this artist of luminosity and radiance —- photo by Mark Weber —- The Tina Goodwin Gallery that handles Sharon’s paintings calls them urban landscapes, or as Tina explained to me more precisely: “built environments” — a lot of shadows falling over deserted streets near railroad tracks and grain elevators, industrial bygone years of Denver, where she was born & raised —- Sharon is in a phase of painting presently where she partially sands off one of her older paintings that she no longer wants around (her words), then she paints over them, another scene, so that parts of the older painting shows through like a palimpsest — pure poetry 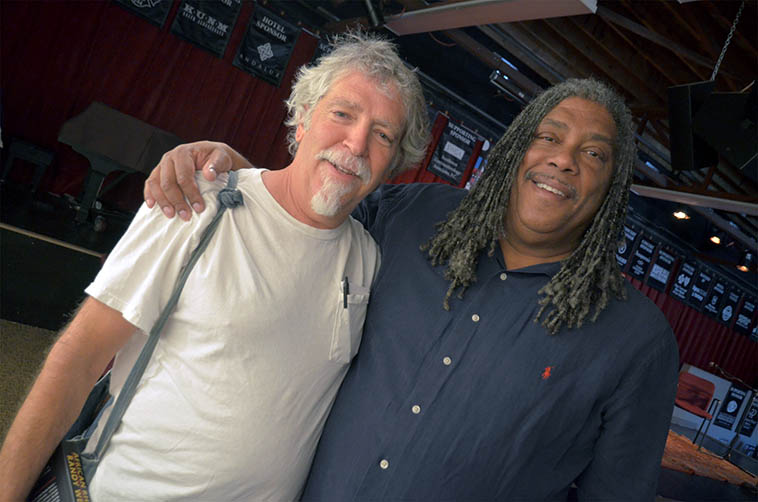 I love this photo — That’s me right after I climbed out of my casket, and my old friend James Newton, at Randy Weston’s book launch for his autobiography at the Outpost Performance Space — July 30, 2011 — photo by James Gale 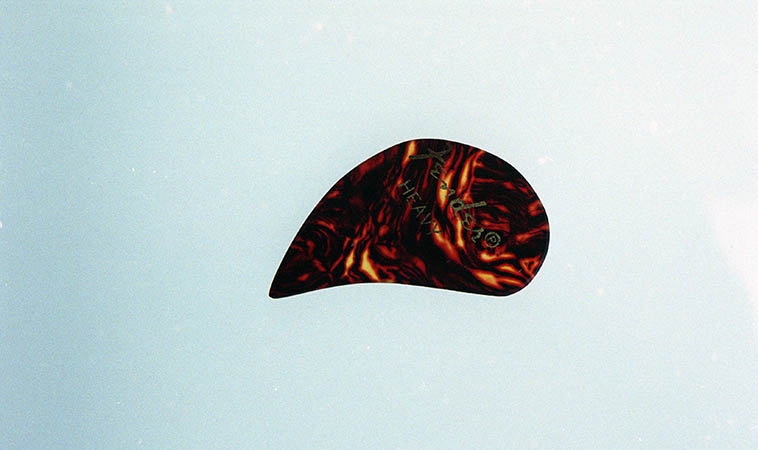 Andy Fite’s guitar pick — He customized these himself, cutting them down and sanding them off ———- When we were visiting with him in Stockholm last May I asked if I could have one . . . .