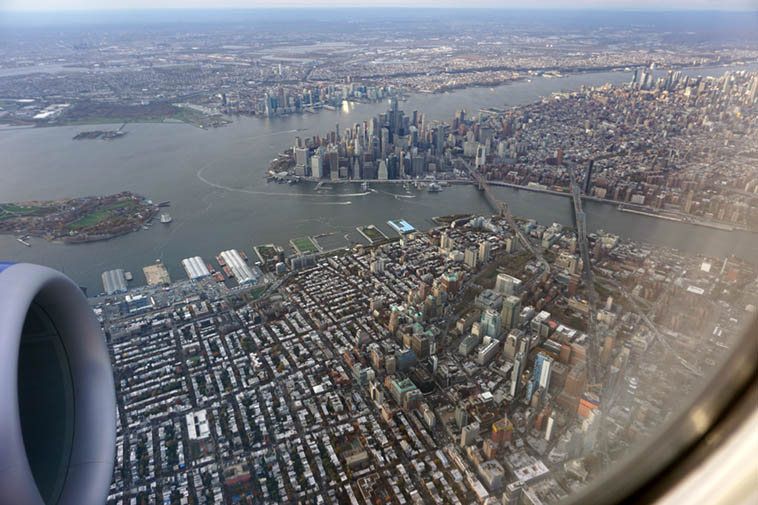 I sometimes suspect
Yoga has woke up
Parts of my body that
Didn’t want to be woke up
Like a dragon sleeping on his hoard of gold
When Beowulf sneaks in
Like a highway patrol hiding behind a billboard
When a speeding Camaro shoots by
(the chase is on)
I have some sentimental music on the stereo
(after awhile everything is sentimental)
Arlen says that at his age the winters can be rough
(we leave the radio station in Santa Fe and
he walks very slowly)
Walking is yoga
Some years ago he asked me about yoga
I told him it’s like a Sonny Rollins solo
Lyrical and intertwined
I tell newcomers to jazz to pay attention to the first note
Everything is connected to it
There’s probably a corollary in yoga? Pranayama? (the breath)
There are yoga postures that make you cross-eyed
Same with Sonny, especially when Max is peppering
him with Virabhadrasana (warrior)
“For every action there is an equal and opposite reaction”
sayeth Supriti quoting scripture (Sir Isaac Newton, 1687)
I got into New York last month just in time for
The big snow storm, we skipped Autumn in New York
And went straight to Winter Weather Jo Stafford
One night, after a recording session, and dinner at an Italian
trattoria in Riverdale, we got a hankering for pastry at Veniero’s
And Ratzo drove us all the way down the Westside Highway
To the Village where the waiter got prissy with us
We were deep into the glories of Red Mitchell
And hadn’t checked the menu, yet, so
He left in a snit
And there we sat interminably
Among hundreds of pastry choices and the aroma of sweetness
Ratzo said, “He’s punishing us”
Francesca was pondering the eclairs
When the aggrieved waiter finally deigned to re-visit our table
I order’d off-menu an apple pie with vanilla ice cream
“a la mode?” he said
I said “Whatever”
Ratzo went avant-garde and had millefogie strawberry
I still remember what Ratzo said a couple years ago
As we drove around the city: “Manhattan
Is not for claustrophobics”
I sometimes over-enunciate words for the pure pleasure
Of sound, purely eccentric I know, the swirl of words
I wish this computer wouldn’t put leading caps at
The beginning of all my lines ——— that’s so Robert Frost,
Even T.S. Eliot and Ezra Pound were into that, and my
Man Gerard Manley Hopkins, but not me, I’m a lower case poet
I’m a moon june spoon cacoon smithereens poet 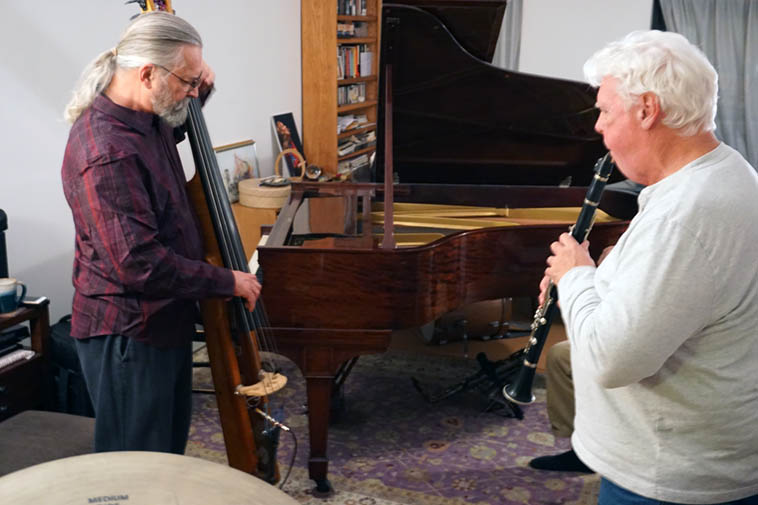 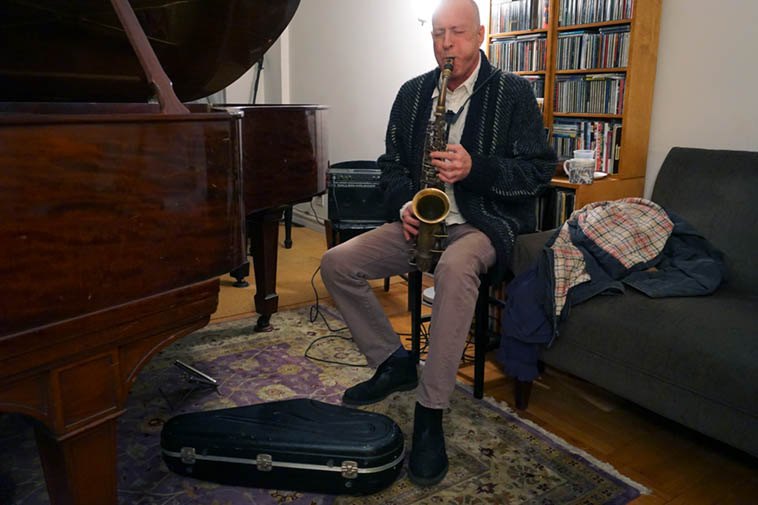 Gary Levy at Carol’s house jam —— Saturday November 17, 2o18 – photo by Mark Weber (Gary grew up in Canarsie, Brooklyn, and lives thereabouts these days, but graduated from University of New Mexico way back when) —- that’s Gary’s 1931 Conn alto —– my wife is a member of the Levy tribe 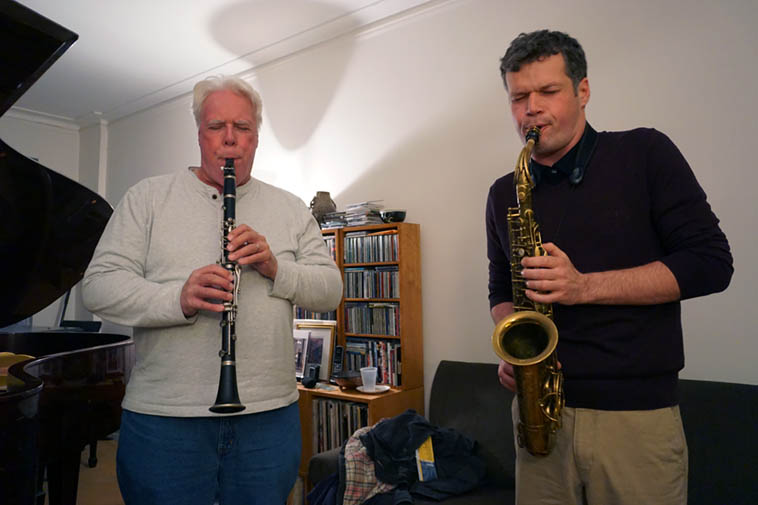 Bill Payne and Nick Lyons at house jam session at Carol Liebowitz’s studio on 103rd Manhattan – November 17, 2o18 – photo by Mark Weber —– almost the entire afternoon of 4+ hours of music was spontaneously improvised (except for Virg playing Out of Nowhere at one point, and Nick asking Bill if he’d like to have a go at What Is This Thing in trio with Carol on piano) 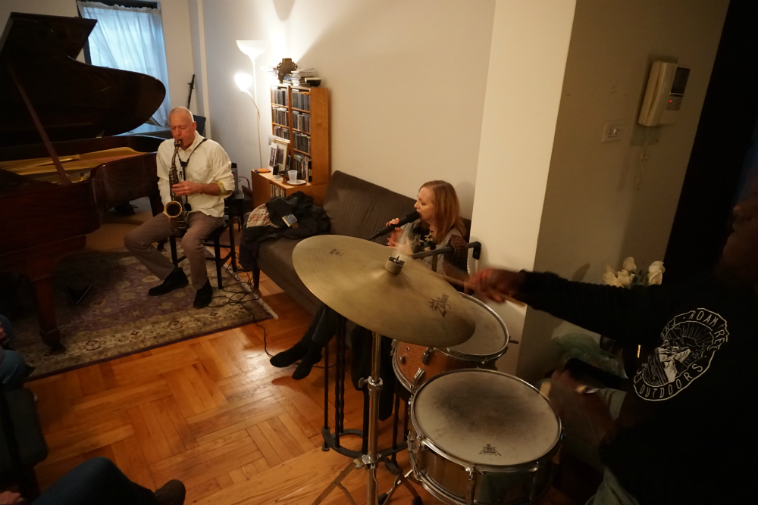 After I read my poem “It is cold and all I want to do is sleep” (#8 in NIGHT RIDERS) w/ accompaniment by Michael Wimberly with mallets on toms, and Gary Levy on saxophone, I handed over the mike to Andrea Wolper and said you take a go at the same poem, and she sang my own poem exquisitely w/ Virg Dzurinko, piano, and Bill Payne, and Michael, this photo is from slightly earlier (Michael shirt says: ROAM FREE – THE GREAT OUTDOORS) – photo by MW 17nov2o18 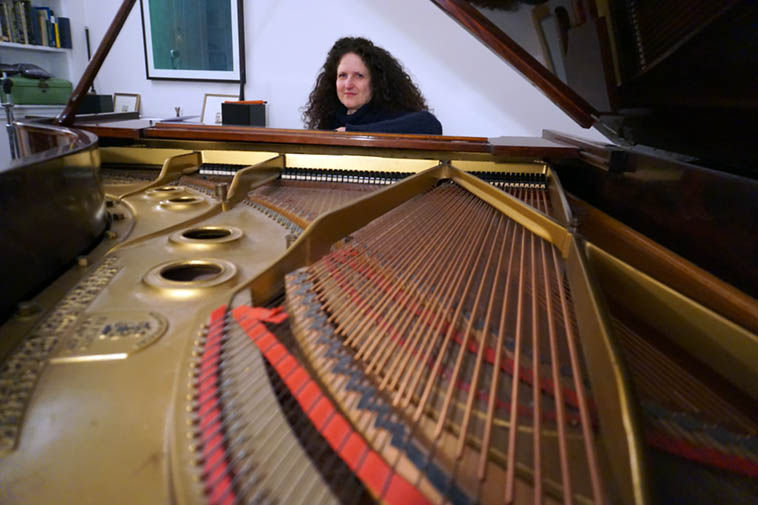 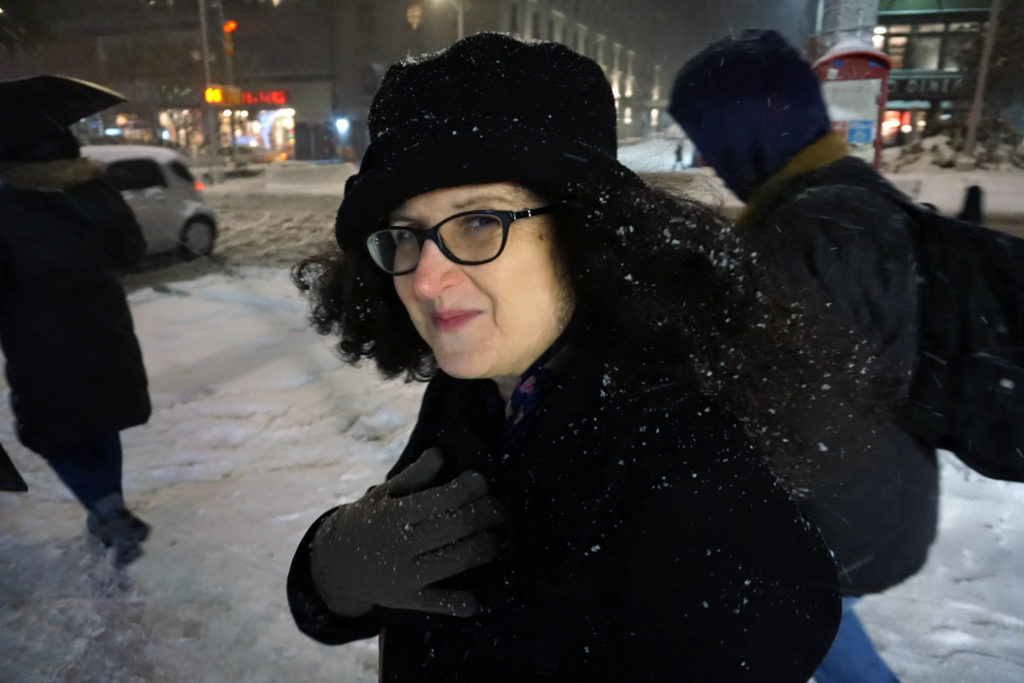 The night of the snow storm —– Carol Liebowitz and I and Bill Payne heading out for dinner, putting our shoulder to the wind —— November 15, 2o18 – photo by Mark Weber

In New York City
You see these people
talking loudly to themselves
big animated conversations
(I’m one of them, actually)
And
In days past
You figured them for The Unhinged
If not completely bonkers
I steer a wide berth around them
Only
To notice that they’re merely
Talking on a telephone device
Wired into their ears 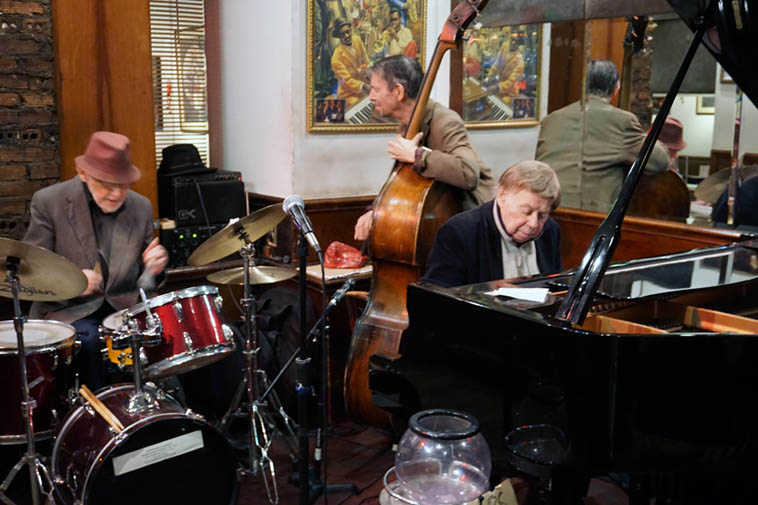 Boy, did I dig this drummer, he was cool as ice, 84-year-old Arnie Wise (never heard of him before), with the Keith Ingham Trio —- it was Sunday early evening I was strolling up Broadway and heard them inside at an eastern Mediterranean boite called Cleopatra’s Needle on 92nd Street – w/ Bob Arkin on bass (Arnie told me “He’s the brother of Alan Arkin”) – I play Keith’s records on my radio show all the time – November 18, 2o18 – photo by Mark Weber (the obelisk Cleopatra’s Needle from circa 3,500 years ago Egypt can be found over in Central Park behind the Metropolitan Museum of Art) 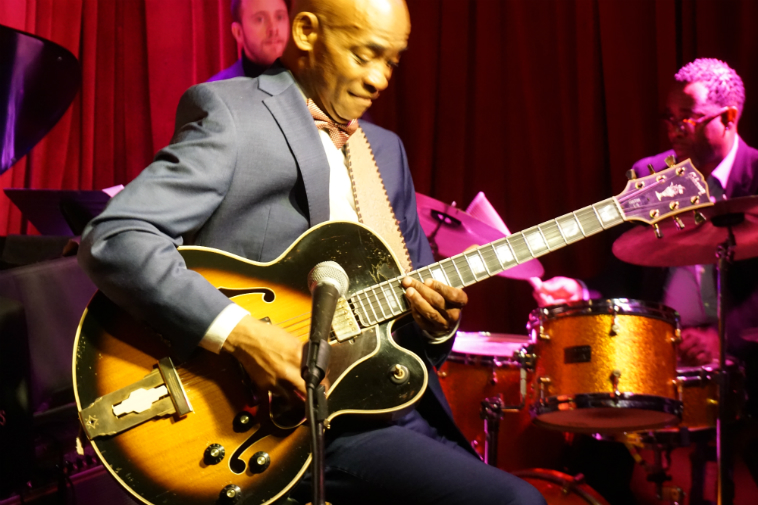 What a great quartet has Russell Malone —– Neal Smith (drums), Luke Sellick (bass), Rick Germanson (piano) — I hope they record soon their arrangement and smoking rendition of the George Coleman tune “Five Four Thing” just blew my socks off —– November 18, 2o18 – photo by Mark Weber and tip of the hat to the bartender Tarik, you’re the best, at Smoke @ 105th on Broadway 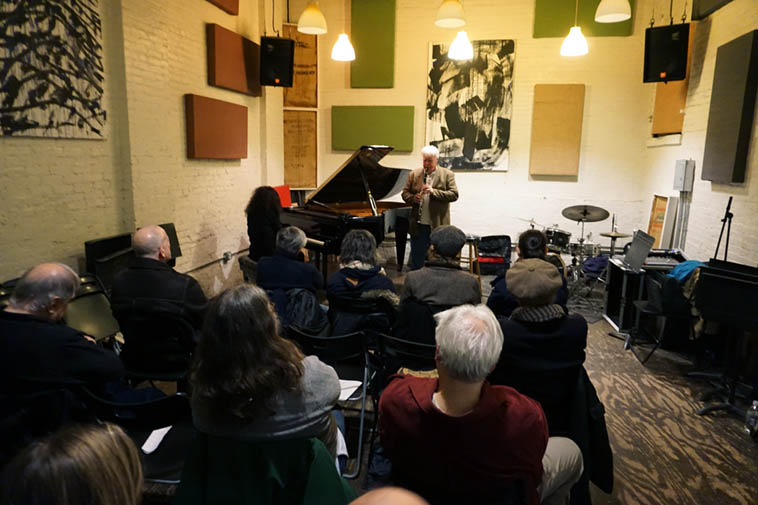 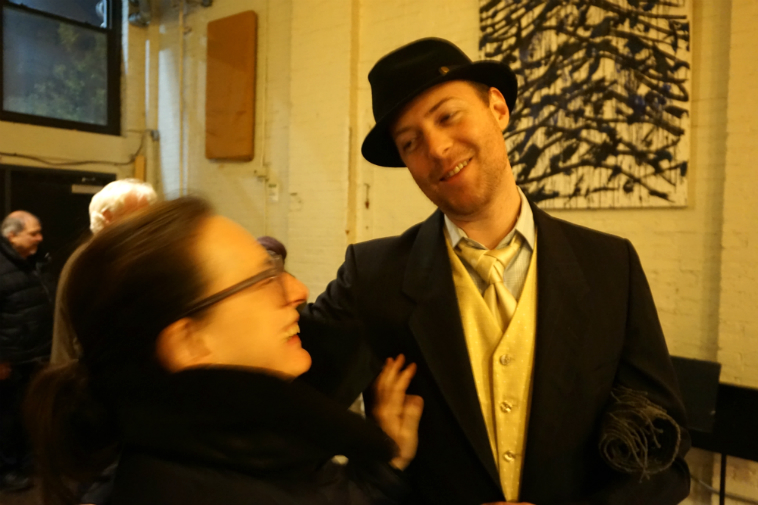 I’m still learning how to use this new camera (Sony a6000 digital) —- Singer Alexis Parsons and saxophonist Jeff Pearring @ IBeam – November 16, 2018 – photo by Mark Weber ——– This is the night we learned that Jeff is a master of knots for neckties 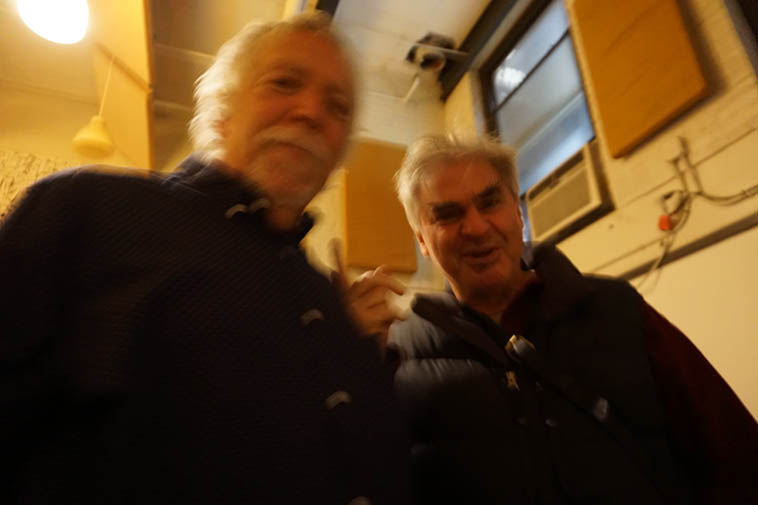 I have a thing for blurry pictures (altho, I wouldn’t want a steady diet of them) ——– I always encourage my friends to pick up my cameras anytime and shoot (Connie used to do this often, and so does Kazzrie), this shot is by Alexis Parsons of me and Ken Filiano at IBeam, Brooklyn, November 16, 2o18 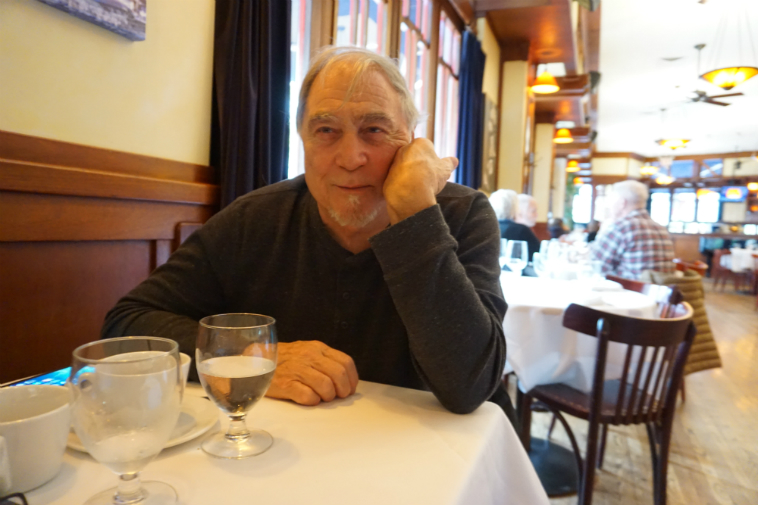 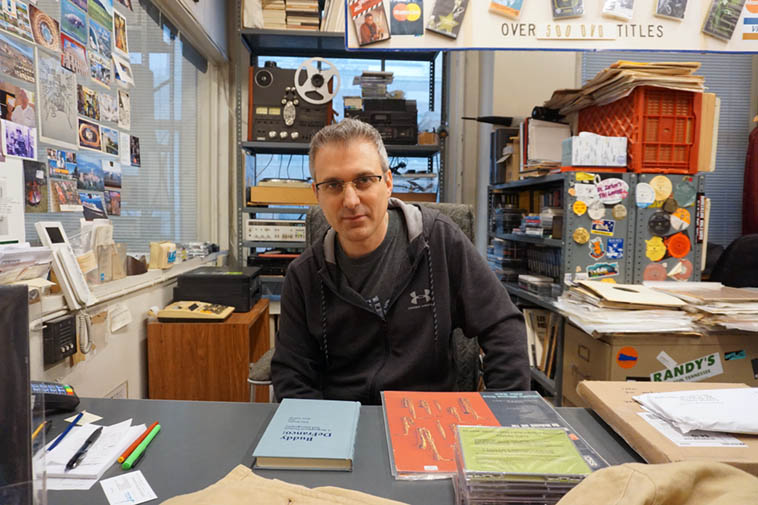 Saxophonist Mike DiRubbo covering at The Jazz Record Center while Fred was out looking into acquiring a big record collection in Montreal – photo by Mark Weber – November 15, 2o18 NYC 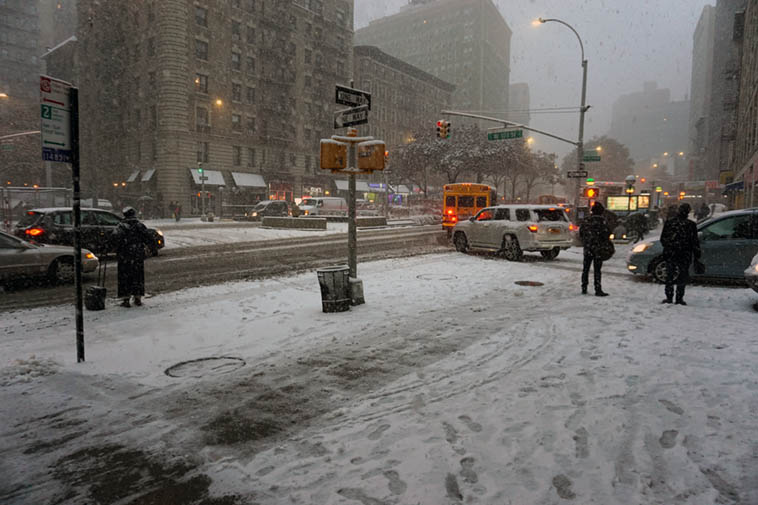 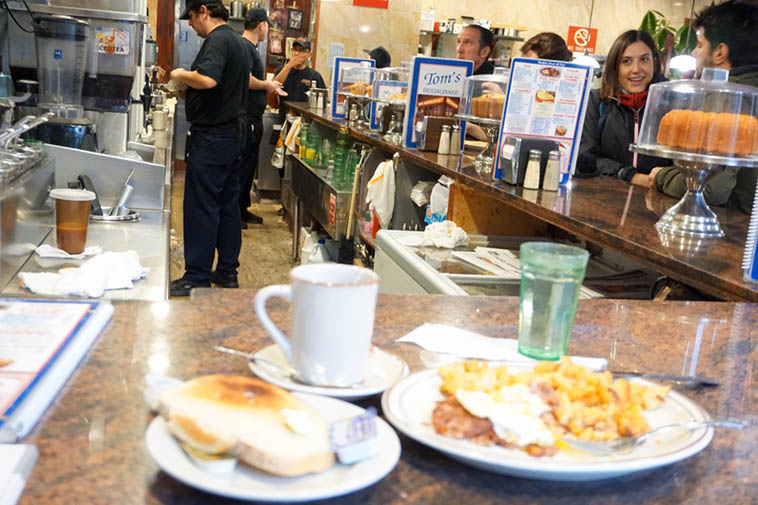 I wish my plate of fried eggs & corned beef hash & potatoes was more in focus —— After my breakfast at Tom’s (112th & Broadway) I jumped on the 1 Train down to 26th and the Jazz Record Center —- Later, around 3:30 heading back to my hotel room on 103rd, a girl gets on the uptown train who is the perfect image of Laura Nyro 1967 with long gorgeous black hair, I told myself she’s no doubt heading to the Bronx where Laura grew up, where it seems that gene pool still exists —- November 15, 2o18 – photo by Mark Weber 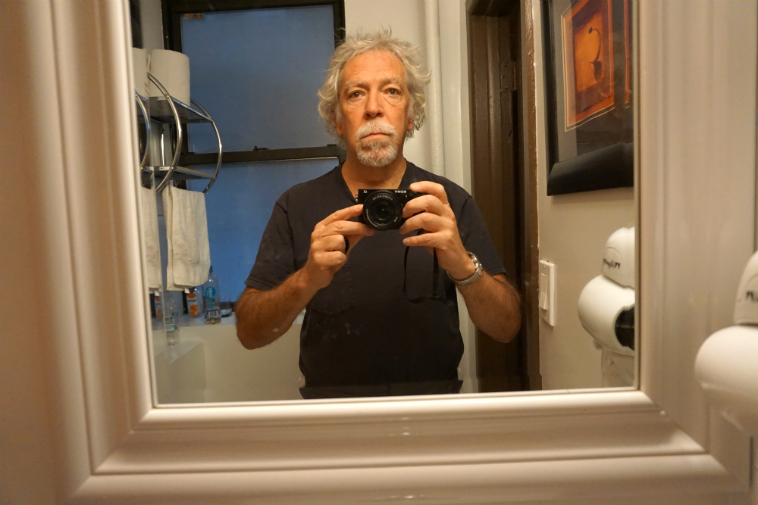 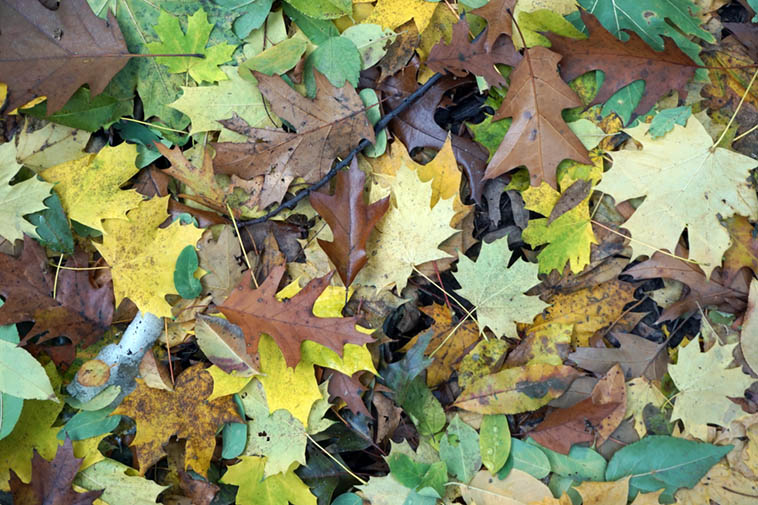