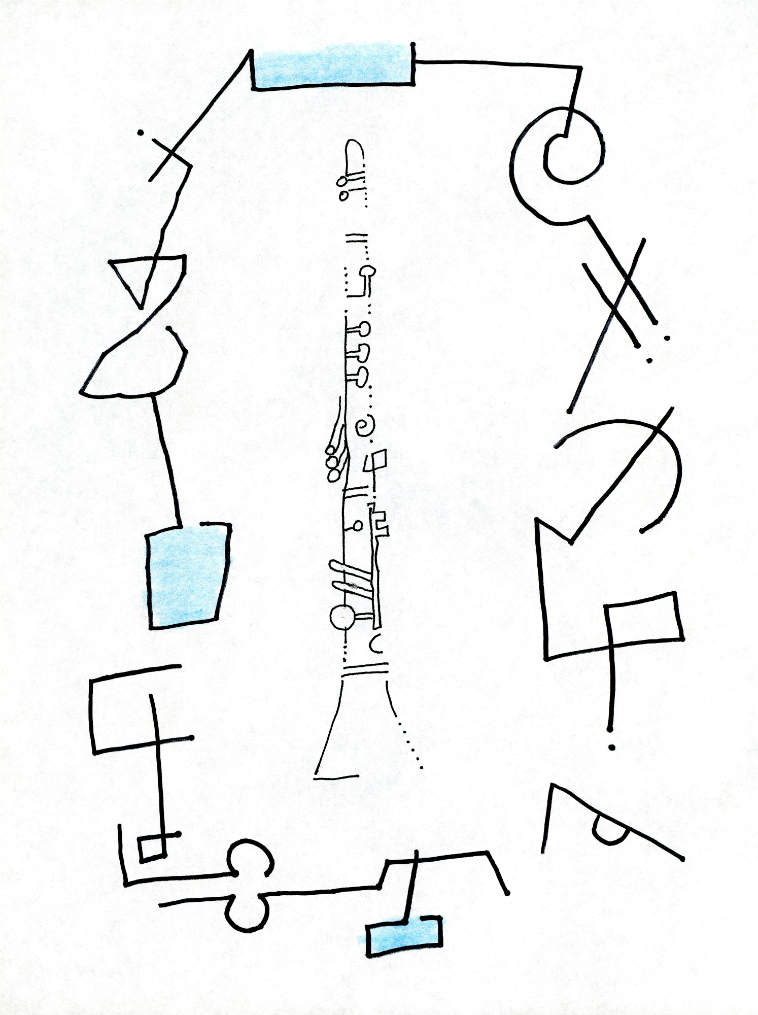 Influences are so incredibly important
How they tumble within you like a kaleidoscope
How making a list would be insubstantial
Some of it obvious
Some of it only momentary
They certainly exist, best left
To mystery, mysteriousness, a guitar
Solo that reaches far back into
Your memory, a trumpet improvisation
That reminds you of something you
Can’t put your finger on, a rhythm pattern
That matches those running horses
You saw once way out on the grasslands
A trombone interlude that sounds like
A language you once spoke in another life
Arising out of the mist 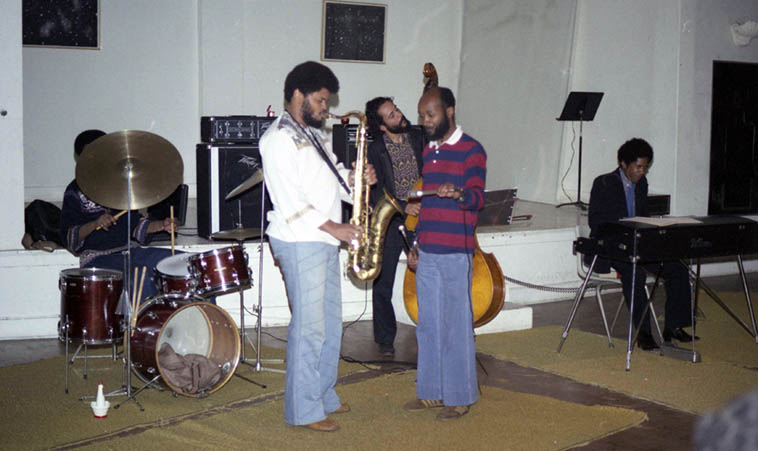 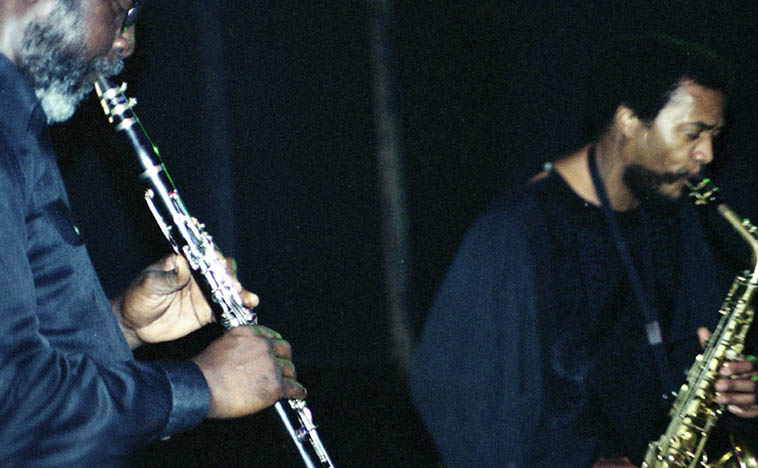 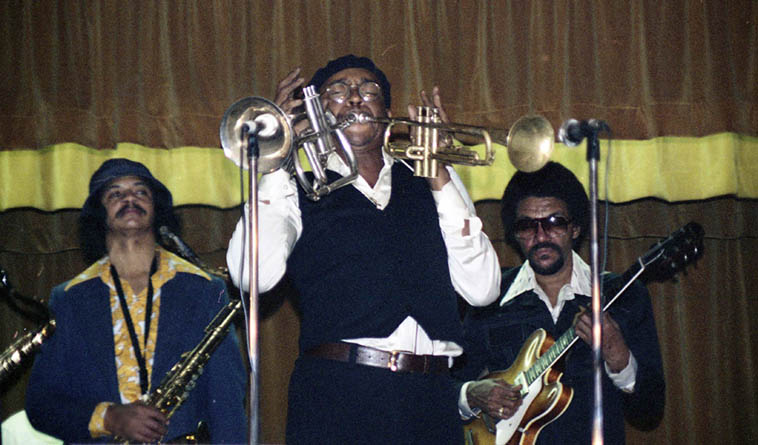 Joseph Banks on trumpets on a Saturday night at Dooto’s Music Center (owned by record producer Dootsie Williams) 1900 N. Central, Compton —- That’s Bill Clark on tenor, and the baadest blues guitarist I ever heard: Evans Walker, who was a hardcore boozer and didn’t survive, both of them long-time members of Pee Wee Crayton’s Ultimates of Soul, who were the backing band this night for a cavalcade of performers, all leading up to Little Milton (who wasn’t too shabby on guitar, either, I found out!) —- January 14, 1978 – photo by Mark Weber 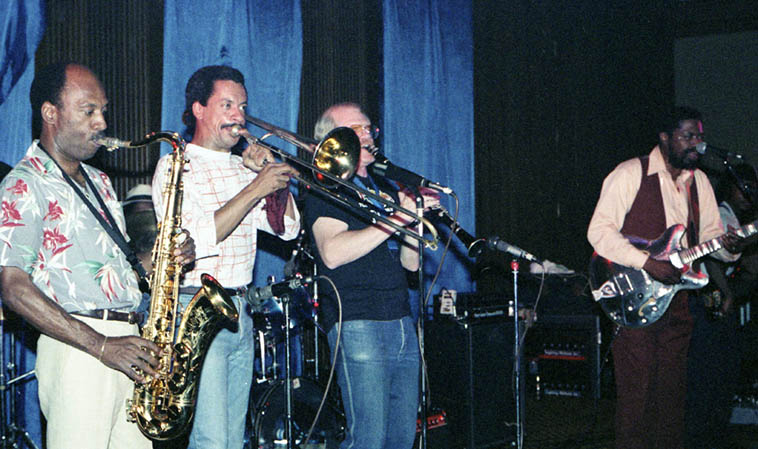 The Son Seals Blues Band – Holiday Inn, Richfield, Ohio – June 26, 1987 —- photo by Mark Weber —- my field notes say that the tenor was John Powell, and the drummer was Louis Hayes, I’d like to know if that’s correct and who else is in this photo 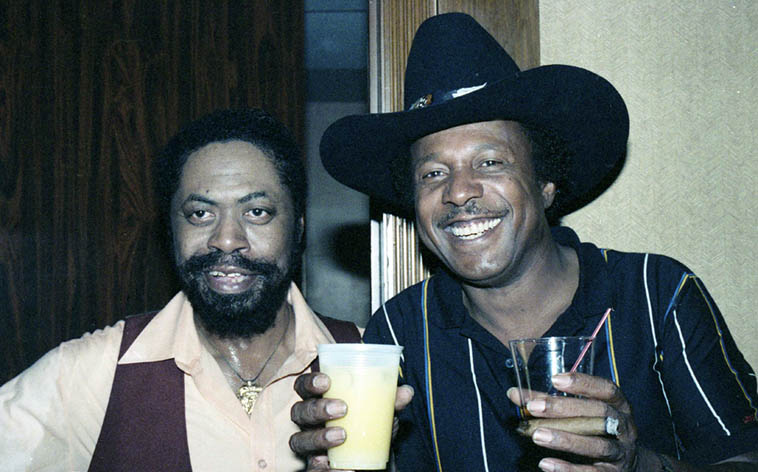 Alligator Records artists Son Seals and Lonnie Brooks out on the road —- June 26, 1987 – photo by Mark Weber (I think one of those drinks is mine, it’s hard to operate a camera and hold your whisky at the same time, especially if you’re half-looped) 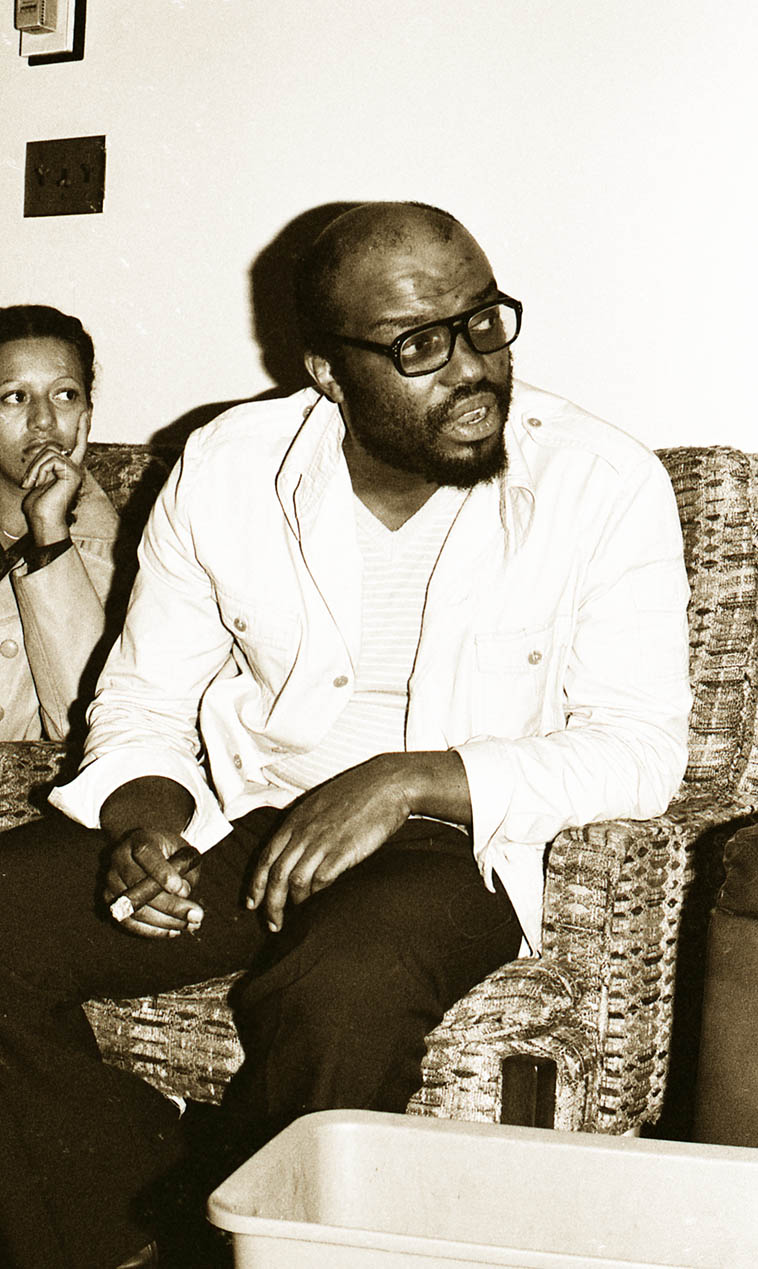 Stanley Crouch looking at Lester Bowie backstage at Schoenberg Hall, UCLA ——- Stanley had a lot of influence over us in those halcyon days before he moved to NYC Fall of 1976 —- His exuberance and love of jazz and literature, and how much he loved Sunny Murray’s drum style, which threw us for a loop back in California when the rumor floated in that Stanley and Sunny got into a fist fight (?) man, New York is some strange place, no? —- I audited his jazz history class at Claremont Colleges 1973-1975, it was an evening class, and the best show in town, Stanley would enter the classroom carrying about a hundred albums and the fireworks would begin —- My gang would pile into my psychedelic VW van and make it over to Claremont, it was an evening class (we all had day jobs so it couldn’t have been otherwise) —– This photo is from a return visit to his hometown – October 20, 1979 after the Art Ensemble of Chicago had just performed on a double-bill with Bobby Bradford-John Carter Duo —- photo by Mark Weber 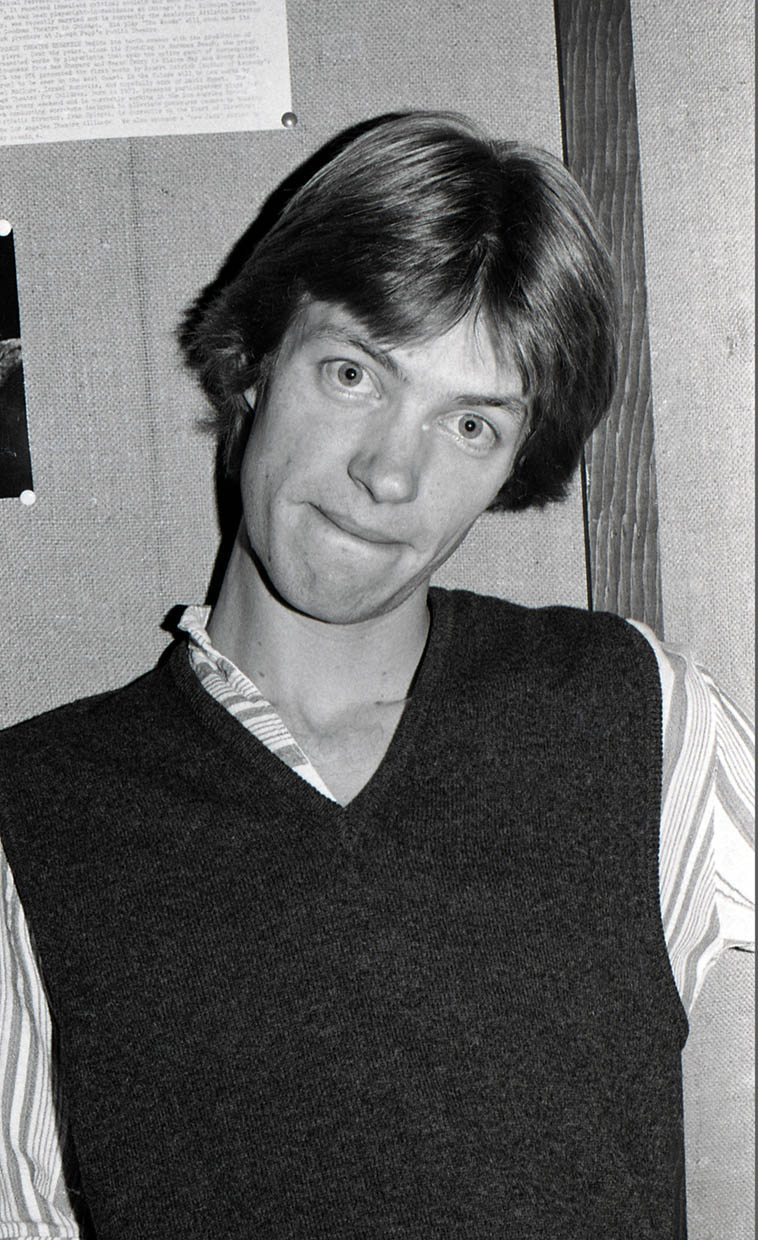 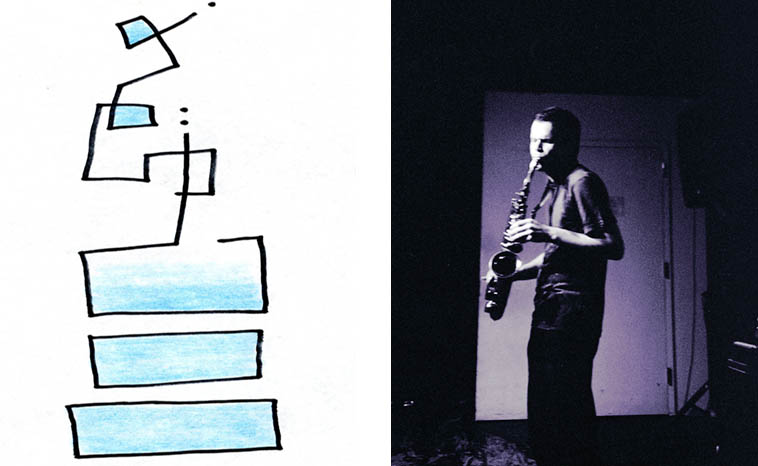 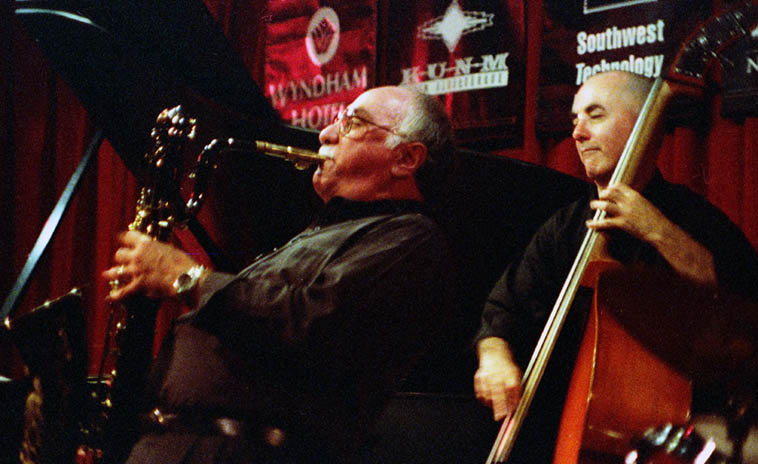 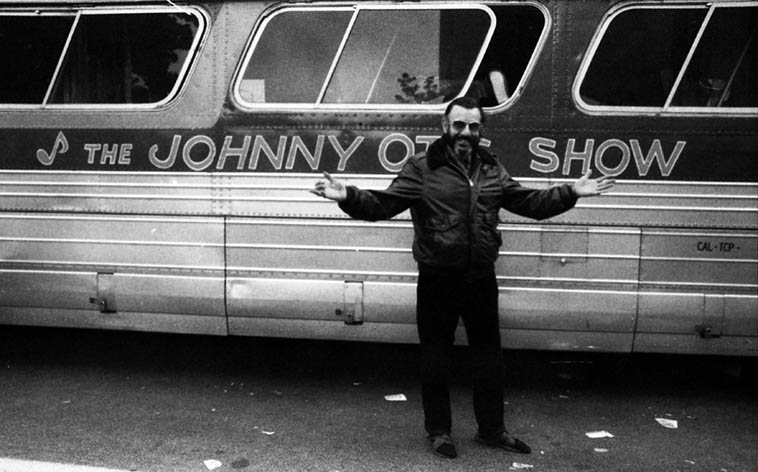 Johnny Otis Johnny Otis Johnny Otis! ———– remember? That’s how his radio show would begin, with the lady’s voice drenched in reverb and then the real Johnny would come on mike for opening salutations, what a great disk jockey ————— photo by Mark Weber — September 29, 1985 Los Angeles 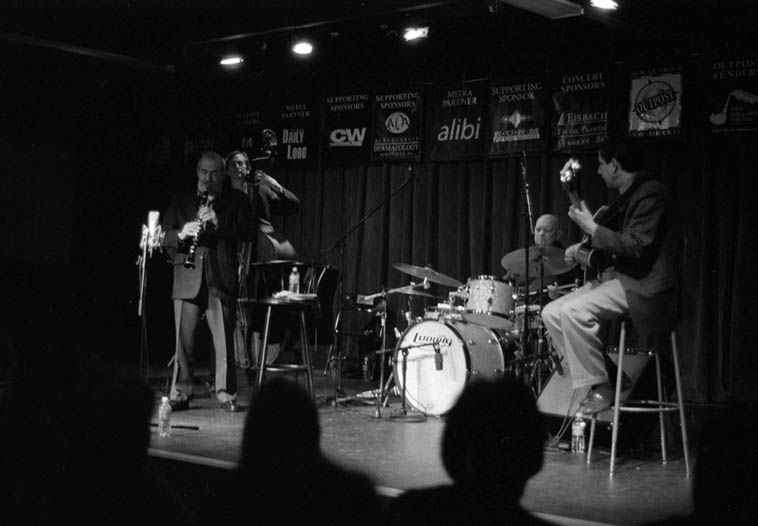 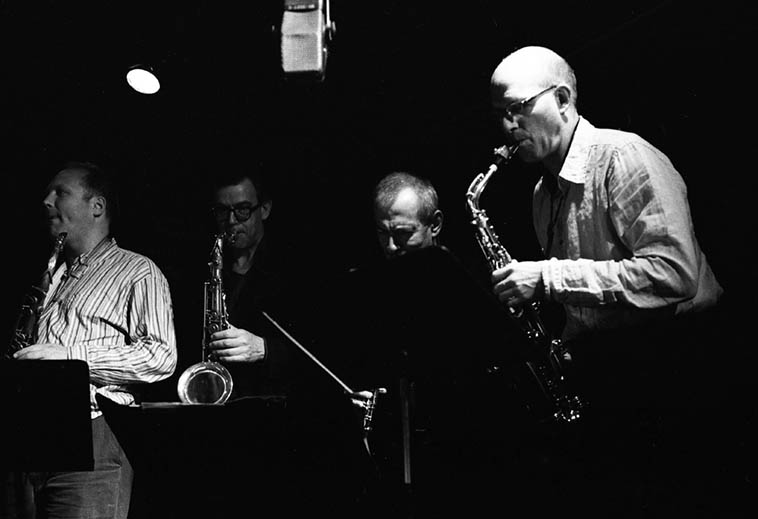 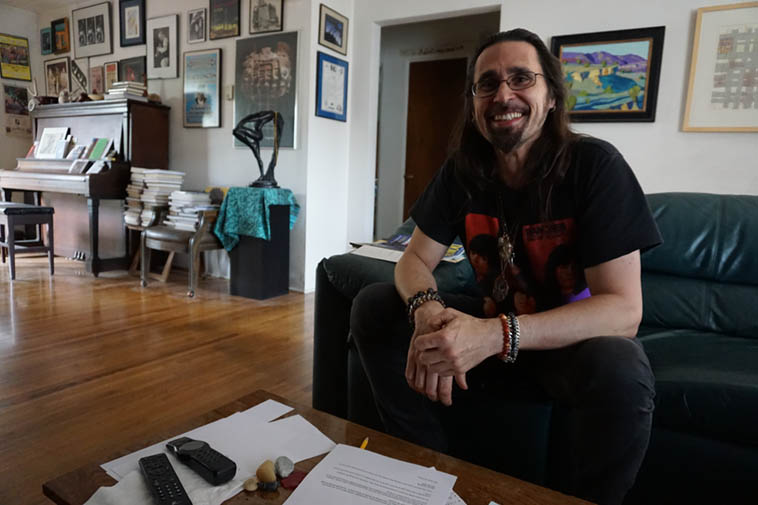 It’s all part of the puzzle, how everything fits together: I see in the discography in Bruce Iglauer’s memoir of Alligator Records BITTEN BY THE BLUES (2o18) that there’s a recent release by a band called “The Nick Moss Band featuring Dennis Gruenling” who only a few months ago introduced himself via email that he was passing through Albuquerque and would like to hang and reminisce about Kenny Davern who he follow’d around the New Jersey clubs when he was a teenager in the 90s (Dennis is pretty sure that “Cross Patch” 1936 Louis Prima is when Kenny first heard Pee Wee Russell —- one of Kenny’s foundational stories listening to the tiny radio on top of his grandparent’s refrigerator) —- It’s a small world sometimes —- photo by Mark Weber at Studio 725 – October 12, 2o18 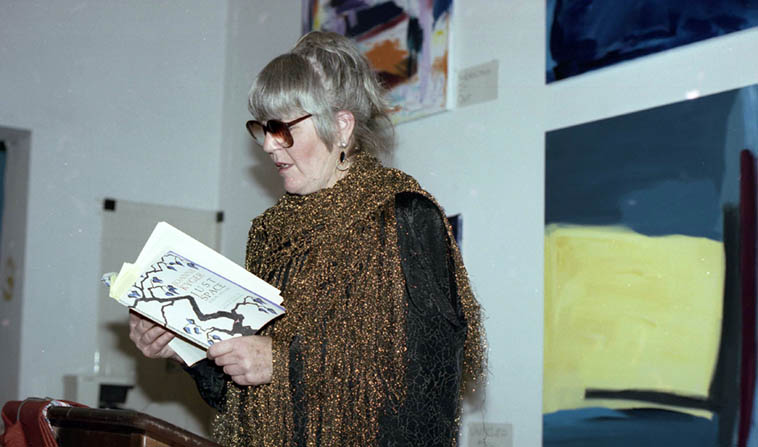 Joanne Kyger, the American poet who never jumped outside the immediate moment, visiting us in New Mexico at Salt of the Earth Books, Albuquerque – January 11, 1992 —— “I am not going to be intimidated/by myself/Outflanked by, upstaged by/this former self of yesterday/which left a pretentious array/of books to read, sources to pull/the western mind into shape” p.63 of her collection AGAIN (La Alameda Press, 2001) and this gem from page 43: “When people say they love me I tell them/Give me a loaf of bread —- I loaf you” —- photo by Mark Weber